Robin and I finished another AFV vs AFV scenario last Monday. The scenario played was ASL-083 "An Uncommon Occurrence". I played the Polish side, whilst Robin played the German side, with German balance (add a PzIIIF) in effect.

The scenario depicts a meeting engagement between opposing armored forces. To win, The Germans must score 10+ more VPs than the Poles. Both sides receive CVPs, but the Germans can also score exit VPs for vehicles exiting off the south edge. This makes for an intriguing scenario, since the Poles can't simply avoid the Germans; they have to guard the south exit also.

By going CE and using the road rate, I was able to assemble my 6 7TPjw (37L armed) tanks around the board 44 farm houses (the R7 and BB8 multi hex buildings), while my 3 7TPdw (twin MG turreted) tanks sought to block the board 44 Q1-I10 road. My basic idea was to use the MG tanks to delay the exit of the light German AFVs (3 PzIBs, 2 PzIIAs, and 2 PSW 231(6R) ACs), while my gun armed tanks engaged the German medium tanks (4 PzIIIFs) with a 3:2 superiority. Having dealt with the PzIIIFs, any survivors would then pursue and hopefully destroy the more lightly armed and armored German AFVs.

Robin drove his PzIIIs down the west side of the map, whilst most of the others went down the east side, so I got to enact my strategy in much the way it was planned. The first kill went to my 8-1 armor leader (rolling a 1,6 on a th10+3 shot; always pleasing when you make a hit using every mod in your favor), the next kill went to the Germans (a Critical Hit, C3.7), as I tried racing up the road towards the HD positions behind the walls in L7, M7. One other tank did make it there, and I was able to eliminate the remaining 3 PzIIIFs and a PzIB with no further losses (it was during this time that I noticed that Robin had put all 3 armor leaders with the PzIBs !! I have no idea what made him choose to do that).

While this was going on, the 3 MG tanks slowed down the movement of the lighter tanks, just as planned, but as the last of the PzIIIFs were dispatched, Robin made a dash for the south edge. As I sought to block him, luck went Robin's way, and he was able to knock out a second 7TPjw (the one with my 8-1 armor leader, unfortunately), plus SHOCK (C7.42) and Immobilize (C7.5) a third. A PzIIA (which had malfunctioned its MA) had earlier exited (for 4 exit VPs), and this made the score 27 Polish to 16 German, with 25 exit VPs of German vehicles remaining on the map. But the insurrection proved short-lived, and my Shocked AFV recovered, and 2 German AFVs were quickly wrecked, making the score 39 to 16, which really was too much to overcome, resulting in a Polish victory.

I think that this is a good AFV scenario, as the Germans have the option of trying to exit the map, instead of just fighting it out. This is my third playing of the scenario, and I'd be happy to try the Germans at some point in the future..... 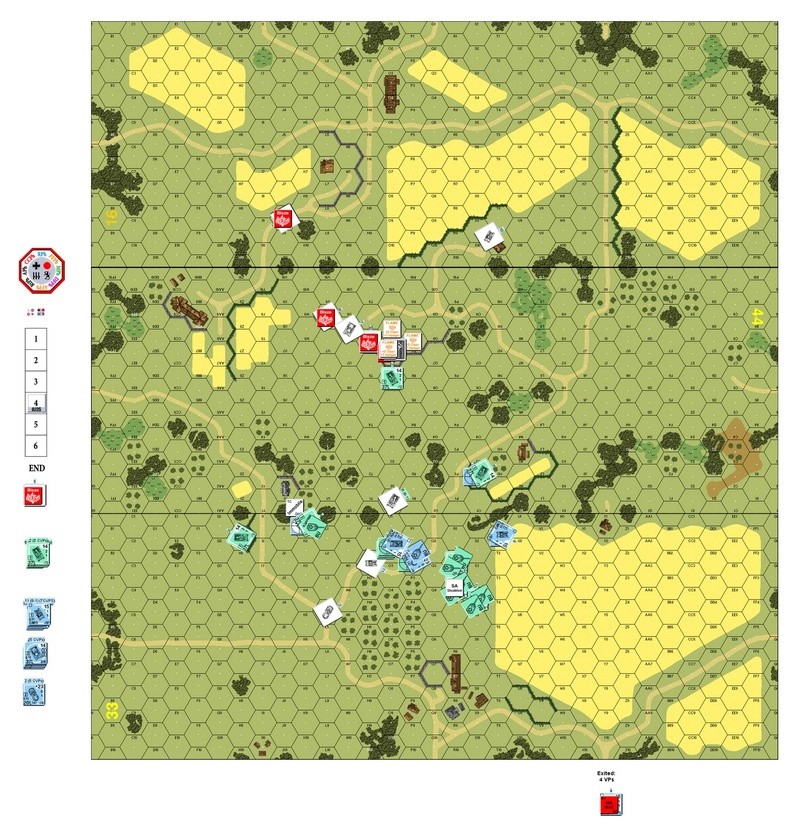