Last Monday, Robin and I completed another AFV on AFV scenario. The scenario chosen was ASL-035 "Blazin' Chariots". Robin chose the defending Germans, whilst I played the attacking British. I had meant to give Robin the German balance (1 less British Stuart tank), but forgot !!

The scenario depicts a pure tank-on-tank fight in the desert. There are no infantry at all, just tanks. To win immediately, the British have to score 40+ DVPs, the Germans have to score 56+ DVPs. If neither side can manage this, the British need to score more than the Germans to win. 3 desert boards are used, so there is nothing in the way of cover. There is also a Late Afternoon Sun Blindness (F11.612), which will initially affect the British as they approach the Germans from the east.

The British have 12 Stuart I tanks, which are fast (18 MPs !!), with average armor protection, and a good AT gun. The concern for the British is that the Stuarts use Red TH#s, which makes their optimum engagement range 1-6 hexes; at all other ranges, their basic TH# will be one less than that of the German medium tanks.

The Germans get more of a mixture; 2 PzIIFs, 3 PzIIIGs, 2 PzIIIHs, 2 PzIVEs, and get 2 armor leaders (9-1, 8-1). The PzIIFs are quite outclassed by the Stuarts, and might do best to simply get into motion and avoid the Stuarts as best they can, the PzIVEs have good armor, but lack a good AT ability, since they deplete their AP on DR7. They can help out by firing smoke and HE here and there, but really their biggest contribution would to simply not get wrecked (16 DVP worth, including crews). So, the burden of knocking out British tanks therefore falls to the PzIIIGs and PzIIIHs, with their 50mm guns. Since the PzIIIHs have better armor, they would be the obvious choice for the 2 armor leaders. The Germans also get a small quantity of APCR (A4), which can be a way of getting an 'extra' attempt TH on low probability shots (since you get to roll again if you don't get the special ammo).

Robin set up his German in 3 groups of 3 tanks on each board with all VCAs facing east. He might have done better to set up some of his tanks in the board edge half hexes, facing inwards, so as to get maximum coverage of his front hull AF, but at least he put the armor leaders where they needed to go (the PzIIIHs) this time !!! I had my Stuarts enter 4 per board, with 2 groups of 2 entering board 28, but soon joining up with each other group of 4 entering boards 27 and 26. I wanted to avoid fighting into the sun, so I kept in motion, just beyond the optimum 6 hex range. Robin knocked out 1 tank (28Q5) and responded by closing the range (see picture 1). 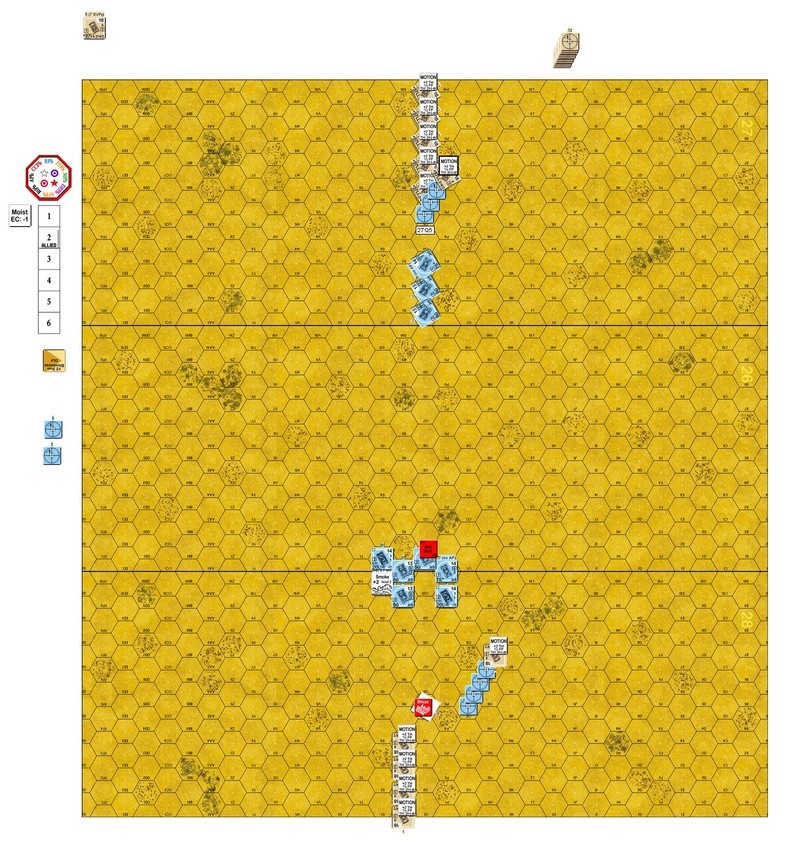 In my turn 2, I swung round behind Robin to take the benefit of the sun blindness (a +2 DRM for fire within its CA), and engaged in Bounding First Fire (D3.3) hit-and-run attacks. In spite of enjoying better odds, I lost 2 more tanks (28P5 and 27T4), whilst destroying a lone PzIIIG (27T4). However, I had at least turned the tables on him, forcing the Germans to fire into the sun at most of my tanks (see picture 2). 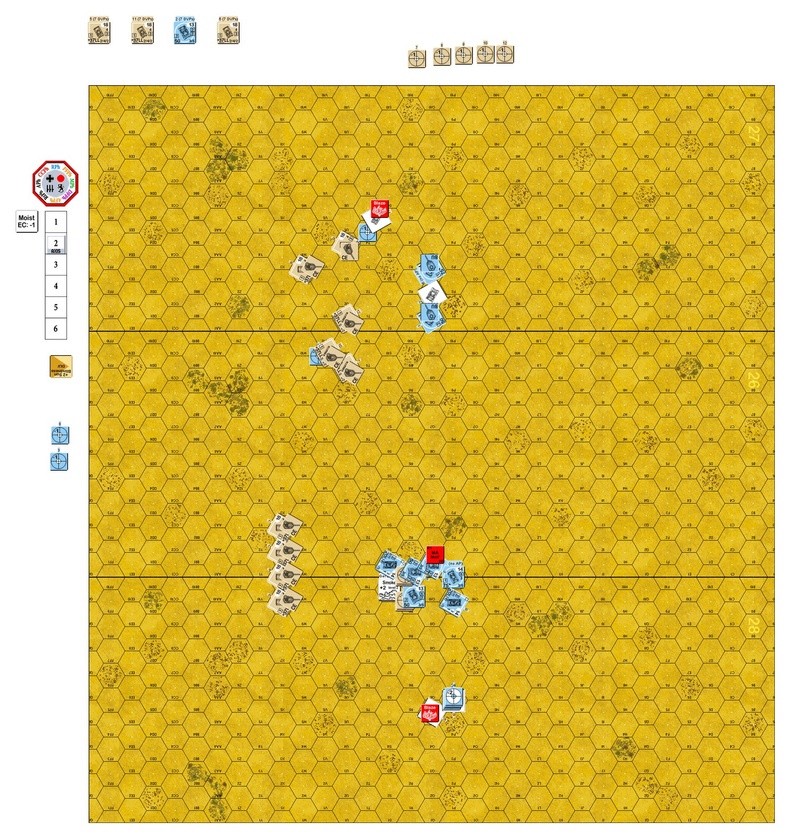 In German turn 2, Robin had to choose between fighting it out into the sun or relocating and taking fire. He chose the latter, and my gunnery was a lot more effective this time, downing a number of German tanks, and with the last 5 kills going my way (28R9, 27Q3, 28V6, 27Q1, and 28Y9), I was able to reach the DVP goal of 40+ points in British turn 3 PFPh (see picture 3). 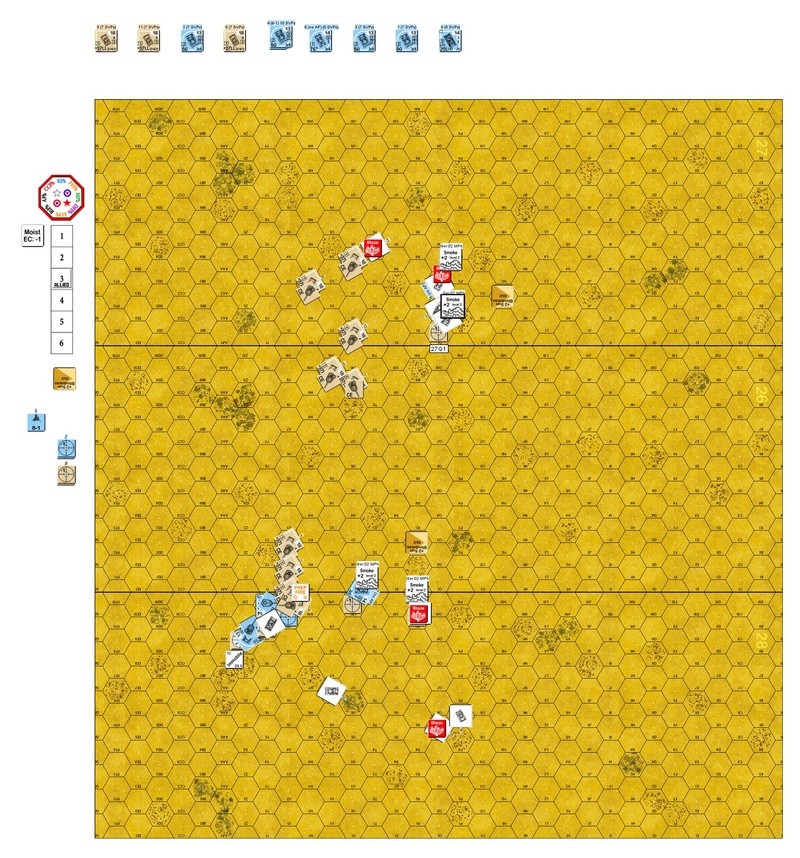 A pretty convincing British win in the end, but I would say that Robin is slowly learning how small things add up in tank battles:

Always keep your front armor facing the danger area (a number of kills were made where Robin neglected to do that); you can change TCA/VCA in lieu of using MGs (as per the last sentence of D2.11). Setting up in board edge half hexes is another great way to maximize your armor protection, too.

Use your special ammo wisely (most notably the APCR and the limited AP for the PzIVEs). Robin depleted the AP from both PzIVEs on shots that missed, and never remembered to attempt any APCR shots (which can be deadly when combined with Bounding First Fire).

Don't feel obliged to fight. The PzIIFs probably would have done best to set up on board 28, get into motion, and run as far away from the British as they could. They might even deliberately try and disable their MA (through reckless Intensive Fire (C5.6)), so as to get Recalled (D5.341) and be able to leave the map without counting as casualties !!!