Last Sunday, we had another ASL meet at my house; Robin, Ray, Little Wolf, and myself. Everyone arrived at different times, so a number of games were played.

In the morning, Robin and I finished off ASL-127 "Land Leviathans", a game that we played the first 3 game turns on VASL. I was playing the defending Germans, Robin was playing the attacking Russians, with Russian balance (upgrade 9-1 armor leader to 9-2) was in effect.

To win this scenario, the Russians need to exit 3 AFVs with functioning MA off the west edge. It seems to be quite a modest assignment in my mind, given that the Russians have 11 AFVs to the German's 5, which means that the Germans need to immobilize/eliminate 9 AFVs (unless the Russians malfunction and fail to repair MAs). With 7 turns available, and Inherent crew morale of 9, there's plenty enough time to exit, and the Russian AFVs match up quite favorably with the German AFVs (except for the BA-6 perhaps). I was going to need plenty of guile and luck to stop the Russian juggernaut !!!

Robin had a platoon of 2 BT tanks advance down board 3, whilst the rest swung south onto board 4. I generated plenty of early hits, but my TK DRs were awful, and I did not get a very good return in terms of kills. After 3 turns, I had knocked out 2 BT tanks, and I also eliminated the T-34 in CC. In return, I had lost a PzIIIF, (and was about to lose a 2nd to recall, thanks to a MA disablement), a PzIVD, and there were 2 Shocked (C7.42) AFVs (a PzIVD and a T-26 M37). Below is a map as at that stage : 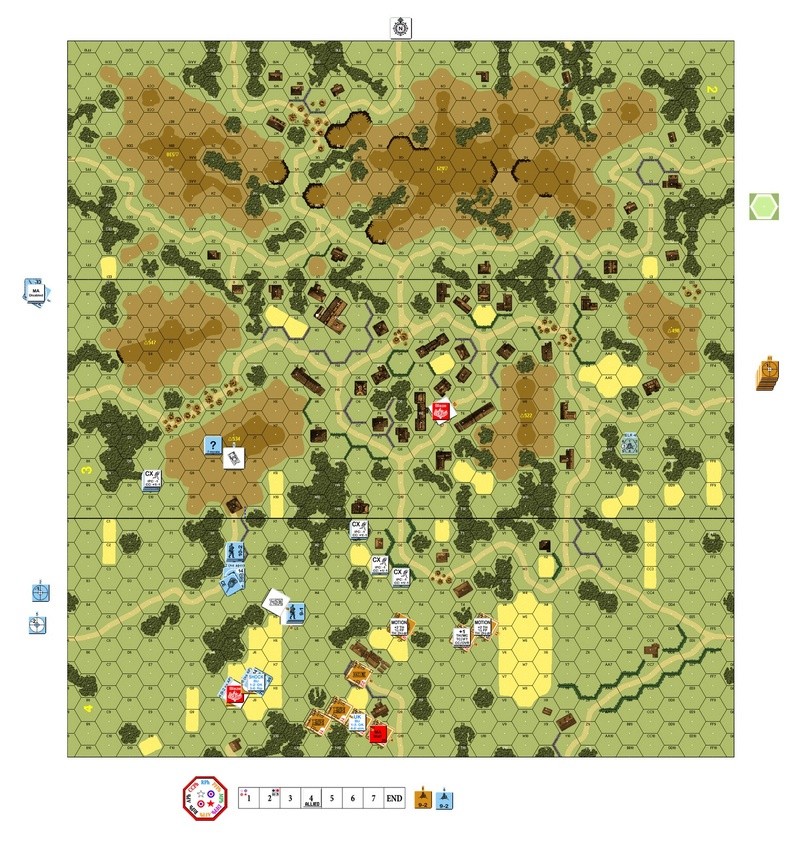 We resumed from this point with a physical map and counters, and just like earlier, I had plenty of plausible TK chances which mostly failed to harm the Russian AFVs, and ultimately, it was a simple Russian victory in turn 6.

Ray joined us later (my first meeting of him), and having completed around 6 ASLSK scenarios, he was keen to try ASL. The scenario chosen was ASL-182 "Strayer's Strays". I played the defending Germans, whist Ray played the attacking Americans, with American balance in effect. To win, Americans need to exit 10+ VPs off the south edge of the map in 3.5 turns.

Ray attacked down the east side of the board, using the orchards for cover. He tried using smoke on several occasions, but failed EVERY attempt !!! However, few Germans broke, and eventually, they got hot dice around turn 3, breaking open an exit area that I wasn't able to close, and in the last turn, Ray exited 6 squads and an 8-1 leader for a comfortable 14 VP victory in his first ASL game. Nice one, Ray !!! 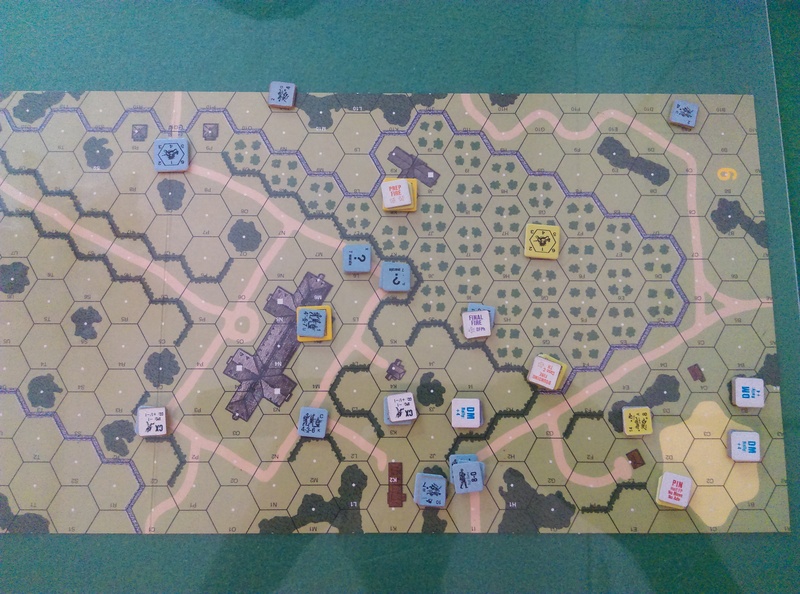 While Ray and I were playing ASL-182 "Strayer's Strays", Little Wolf arrived, and he and Robin also played the same scenario, with Robin defending as Germans, and Little Wolf playing the attacking Americans. Little Wolf played his first ASLSK game (S-005 "Clearing Colleville", winning as Americans vs Roy) at my home last week, and was prepared to jump straight into ASL in his next game. Good stuff, Little Wolf !!! Similar to our game, the American attack formed along the east flank through the orchard area, and once again, the Americans broke through, with Little Wolf's American winning also.

What impressed me the most was the pace at which Ray played his first ASL game. We were just about finished by the time Little Wolf arrived, so we started another short game. The scenario I chose for us was U-031 "The Front In Flames". I played the Russians, while Ray played the Germans. I had meant to give Ray the balance, but it slipped my mind, and we played the scenario as is. This scenario depicts 2 enemy columns bumping into each other in a modified portion of board 1. To win, the Germans need to inflict more VPs than the Russian, with VPs consisting of CVPs and 4 VPs for control of the level 1 location of 1K4. Forces enter on a randomly determined hex, in a continuous line of squads (essentially an SSR created column), with a pre-game plotted course. The game begins when the columns sight each other. Here is a photo showing the point of 'contact'. 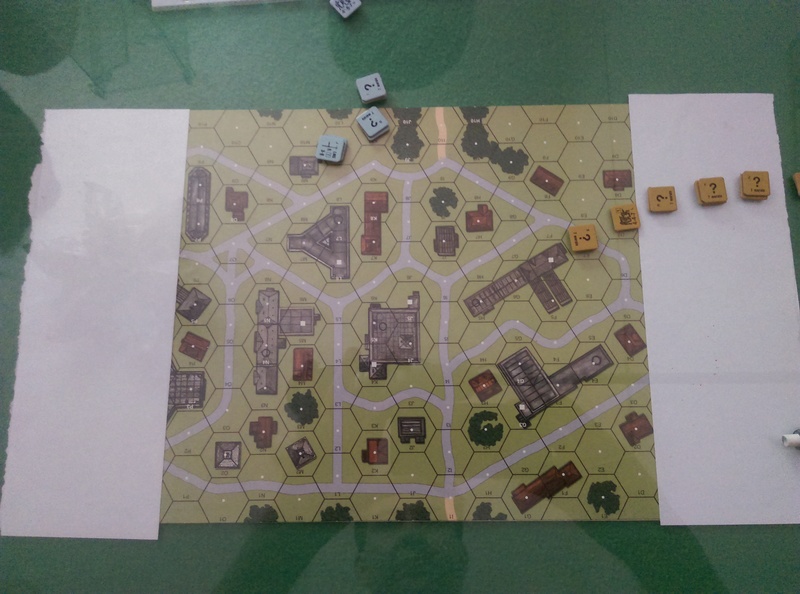 After contact was made, Ray was able to get to 1K4 first (moving first helps !!), which put me behind on points. I went further behind as I lost another halfsquad to an IFT K/2 result, but when a German squad went Berserk (A15.4), and subsequently got cut down by crisp Russian fire, I was left trailing by 3 points. I was able to assemble and launch a Human Wave (A25.23) in the final turn; I wasn't necessarily convinced that this would be the best tactic to use, I was more wanting to demonstrate it's mechanics to Ray and Little Wolf. However, the dice were quite kind to me, and the Russian Human Wave did a splendid job of overrunning 1K4, with my Russians taking 2 squads and a leader prisoner, killing another squad in CC, and capturing the level 1 location of 1K4 for a flattering score of 20 to 1 !!!

So, a good ASL meeting where 4 (small) scenarios were completed, and there have now been 6 different Taiwanese players to visit my house for FtF ASL this year.