Last Monday, Robin and I finished another ASL training scenario. The scenario chosen was ASL-129 "Slamming Of The Door". Robin played the attacking Russians, whilst I played the defending Germans. Russian balance was in effect.

This scenario depicts a company of German infantry that have over-extended their advance and outrun their support being counterattacked and forced to form a hedgehog defense. The Russians have 16 squads, 3 leaders, 6 T-26 M37 tanks to attack 10.5 German squads, 3 leaders, with a module of 80mm OBA (scarce ammo). The Germans are later reinforced by 3 StuGIIIBs. We also played with Battlefield Integrity (A16), an optional rule that has the potential to lower the ELR as a side sustains casualties. This seems to be a seldom used rule, but I wanted to give Robin the chance to experience it for himself and form his own opinions and conclusions of it.

To win the scenario, the Russians need to inflict 18-22 CVPs, depending on the turn of the German AFV reinforcements. This can be a bit of a trap game for the Germans; the reinforcing AFVs (and their 9-1 armor leader) are worth 20 CVPs alone!! On the other hand, if the AFVs don't rescue the infantry, they are most likely to surrender a number of squads, which will soon see the Russian CVP total balloon towards their goal in short time. The Germans will have to get the balance right !!! This scenario has a lot of potential for both sides; Russians can combine Armored Assault (A9.31) with Human Wave (A25.23), a tactic that radio-less AFVs can be well suited to. A Commissar is available if the Russians want one, too. The German 80mm OBA can be a little fickle with its scarce ammo, but when functioning, both concentration FFE and Harassing Fire (C1.72) can be very effective in an environment where most of the cover available is woods (see Air Bursts, B13.3). I think that this is a really good scenario for the simple, yet subtle VCs combined with a myriad of options for either side for such a relatively small scenario. Playing with Battlefield Integrity also adds just a little more spice to it, too !!!

I formed my defense in a cluster around the 4P6 farm building, whilst Robin attacked in 3 groups. The main group of around 10 squads attacked from the west flank, whilst a platoon of 3 squads with MGs sought to interdict and pin from the center (4S2 in particular), and the last group attacked along the east flank. 4 T-26 tanks supported the main (west) group, whist a pair moved through the long board 5 woods-road to support and protect the 2 platoons in the center and east.

Robin was a bit slow in forming up his attack, and this gave my squads an opportunity to Entrench (B27.11), helping to turn my hedgehog into a stronger fortress. My OBA got Battery Access, with which it blasted the east platoon and sent them scurrying. The center platoon enjoyed better success, breaking a couple of my units, and even picked up a couple of CVPs by eliminating a squad with some crisp ROF tears. On turn 4, Robin's main group launched an 8-squad Human Wave, which was broken up, and this saw the Russian attack somewhat stagnate. My StuGIIIBs arrived turn 4, and harassed the small infantry platoons in the center and east. The Russian ELR dropped to 2 when Robin failed the 2nd Integrity Check DR (A16.2), and my StuGIIIBs knocked out 2 T-26s.

By turn 5, things were looking dire for the Russians, and they committed what was left of their AFvs to engage the German AFVs. But my 3rd OBA Fire Mission destroyed 1 more, also immobilizing another. The Russian infantry did finally manage to do something right, when it flamed one of the StuGs with a well placed MOL (A22.6). In last turn desperation, one T-26, smashed into 4P6, but got flamed by Reaction Fire (D7.2), and another sought to pursue the (now withdrawing) StuGs. But it was to be in vain, as I plastered it and its LOF with smoke so as to totally obstruct its LOS to its would-be target in the final turn. 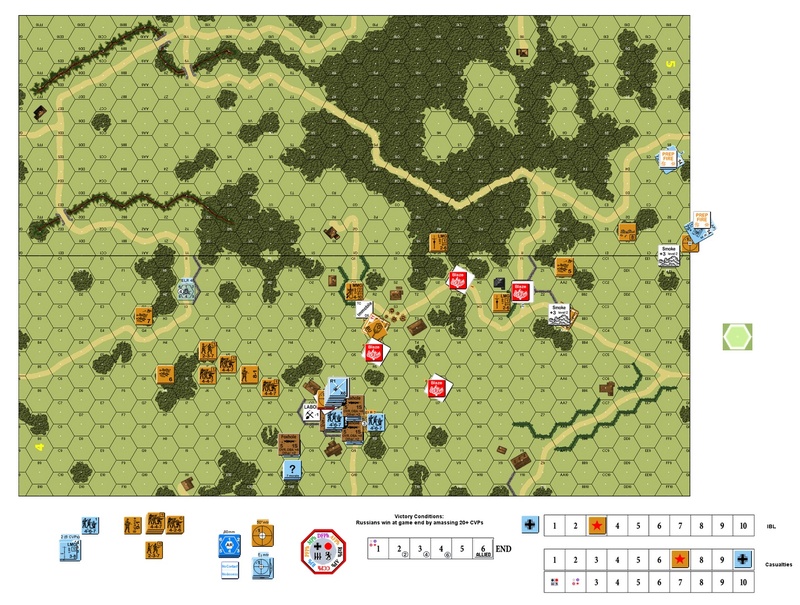