I haven't played David in an age, but finally we got a game in this past afternoon. After such an absence, a simple, but interesting infantry scenario would be just the tonic. After looking at a few possibilities, David chose S-059 "Mopping UP, with myself defending as Germans, and David attacking as Americans. We played the scenario as is with no balance added.

This scenario depicts a force of 9.5 American squads, 3 leaders, and 3 SWs attacking a German force of 6 squads, 3 leaders, 4 SW. To win (at game end), the Americans must control all buildings on/east of row M (a total of 25 hexes), or prevent any unbroken German units from being in play. The VCs appear demanding, but the Americans do enjoy a full 7 turns to achieve them. There is also a steeple location in Q6 (we used an AFV wreck to depict the steeple location), from which the Germans get a great view of the approaching Americans. However, the Americans receive a form of 150mm OBA, which can hit (and even destroy) the steeple, as well as it's adjacent locations. The Germans also receive 3 tunnels, which certainly helps to keep the American player on their toes!!!

Contrary to convention, the (attacking) American sets up first in this scenario, which puts the American a little on the back foot. The artillery is a bit scary for the Germans, but nonetheless, I started the 8-1, MMG/247 in the steeple location, with tunnels in T5-V5, R1-P3, and Q6-O8. David attacked mostly through the AA5 building and the BB8 grain-field. My firing was a bit erratic to start with; a great many 3's and 11's, which helped to make the Americans stumble a little. But nonetheless, the Americans got squads into blind spots, and so I abandoned the steeple in my turn 1. The disparity in numbers means that the Germans need to keep trading territory for time. Luckily, the Americans don't have many SWs, so with the +3 TEM of the plentiful stone buildings, the Germans can often stand up to the American FP.

We had a very close game in the end. David had reduced me to 2 squads and about 4 building hexes at the start of turn 6, but my remaining 2 squads did a great job of holding off the Americans until the final turn. In the last turn, David was able to swarm and ultimately advance a number of squads into the final 2 building hexes that he needed, but missed on both attacks (a 4:1 and a 3:1 @-1). So, we go to German turn 7, the final turn of the game. My leader tries to reach one of the melees, so that he might help out, but a 2MC pins him. In the last CCPh, I miss on both shots, whilst David makes both of his to win by building control right at the very end. No units were ever affected by the artillery (the steeple location actually survived the scenario), but its presence no doubt gave both sides pause for thought !!! 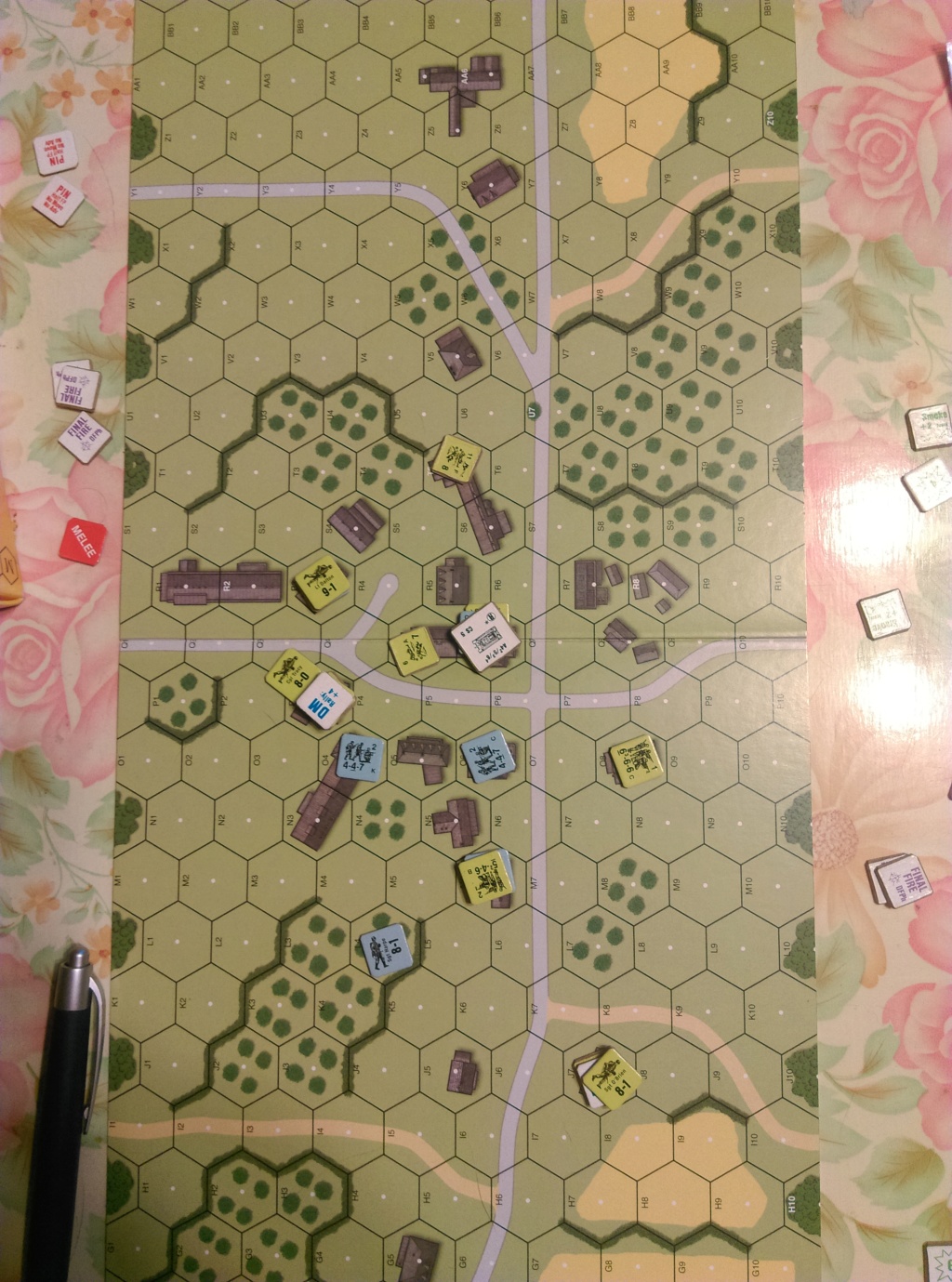 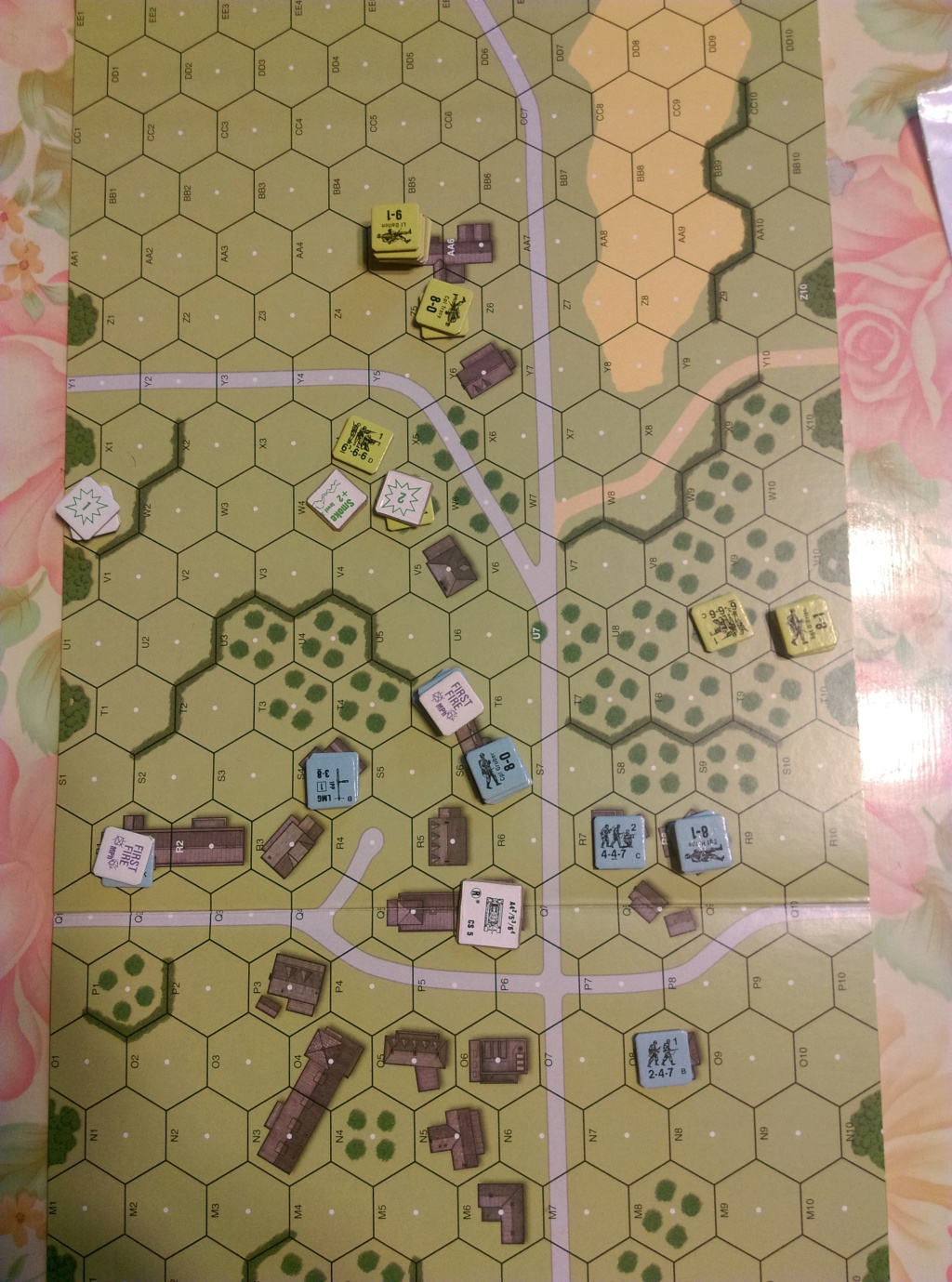 (The above picture was taken part way through American turn 2 MPh; its one for the newbies. I think that it illustrates nicely how smoke can change the game)


A good scenario and a great afternoon !!!