This past afternoon, Robin, Little Wolf, and myself finished our 3-player game of ASL-003 "The Czerniakow Bridgehead". Robin played the attacking Germans, Little Wolf and I played the defending Allies, with him playing the Russians and myself playing the Partisans. No balance was in play. We actually began playing this scenario about a month or so earlier, completing the first 5 turns then, and finishing off the remaining 5 today.


This scenario depicts a fighting withdrawal, with the Partisans coming to the assistance of the overwhelmed Russians. To win, the Germans must outscore the Allies in CVPs, and (having crossed the board 23 canal as well as board 20) have forces on board 8 worth 20FP. The Russians have 15 squads, 3 leaders, and 2 SWs. The Partisans have 12 squads, 3 leaders, and 2 SWs. The Germans have 15 squads, 3 crews, 7 leaders, and 7 SWs, so are quite outnumbered by the Allied squads. But SSR2 requires all 447 squads to take a NMC at the end of the German turn 1 RPh, so they are often really on the back foot. After the Germans subject the remainder to their PFPh, the Russians can easily be on the brink of collapse. The Germans will typically enjoy the initiative early on, so the Partisans have to come to the rescue of the Russians and slow down the Germans enough for the Russians to have a chance to recover. The Partisans get 18 dummy counters, as well as 2 HIP squads for a bit of surprise. They are Stealthy (A11.7), can use MOL (A22.6) and Sewer Movement (B8.4), but suffer from Ammunition Shortage (A19.131). 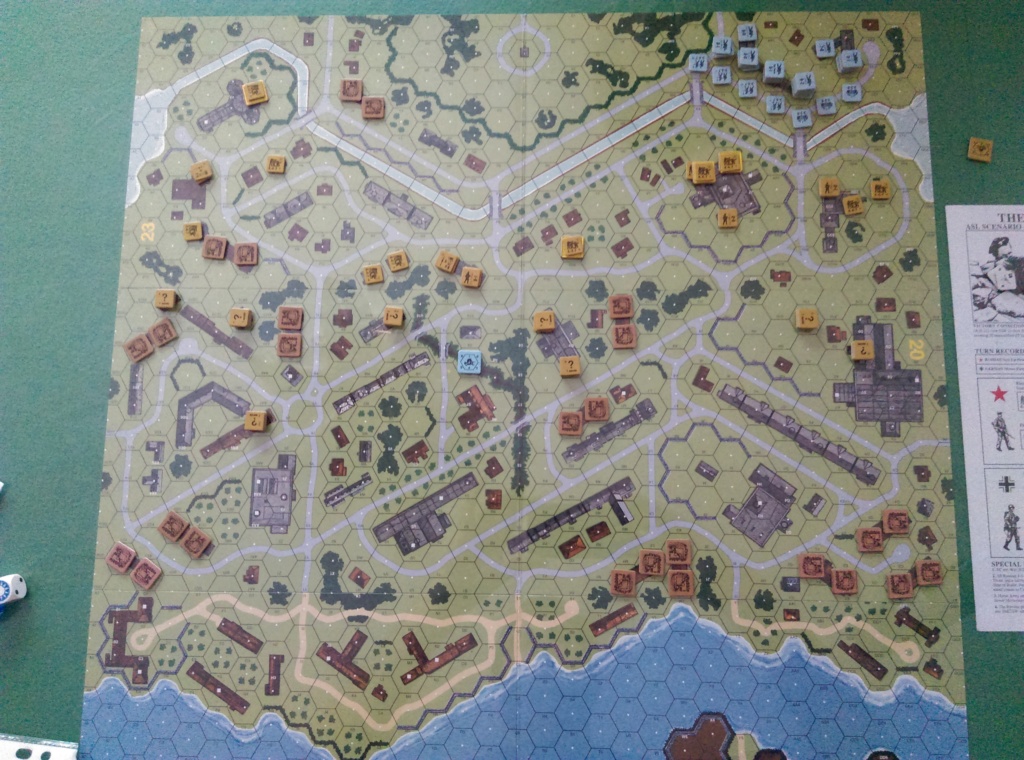 Little Wolf and I both concentrated our defense around interdicting the bridges (as well as their adjoining shoulder hexes) and having rout paths for the Russians. Robin set up the Germans up strongly on the north flank. The SSR2 initial NMC broke 5 squads and pinned 5 others. Robin's Germans crossed the canal around turn 2, and the Germans pushed carefully and steadily down the north flank of board 20. My Partisans had to take the brunt of the German attack for a while, as the Russians recovered, and some of my Partisans got a little chewed up. But the Russians did recover, and slowly moved to reinforce the northern sector of board 20. The Germans got MGs up into level 2 positions of building 20Y7, which greatly slowed down the pace of reinforcement for the Allies. At the end of 5 complete game turns, Robin had accumulated a large advantage in CVPs, and the Germans looked well poised to push past the Allies, which is the point at which we began today. 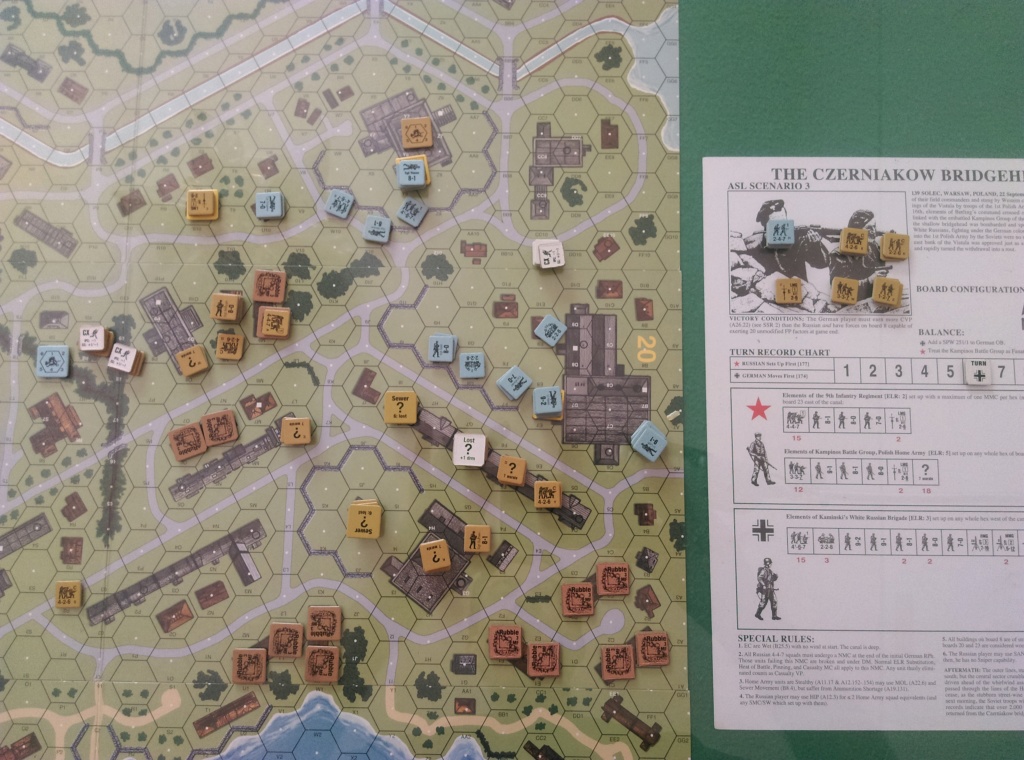 Robin cleared out the 20D4-J7 city block using 9-2 directed Spray fire (A7.34) and Dash (A4.63) movement. All good stuff, but I think he would have done better to leave someone at level 2 to interdict movement. The Allied squads were able to move a bit more easily, and I got plucky against a lone crew, trying to surprise it with a sewer move and ambush in CC. Unfortunately, the B8.42 Emergence dr was not favorable, and 1 squad broke and perished in the RtPh. But being able to move northward was golden for the Allies, and it looked like we might be able to get in the way of the Germans. 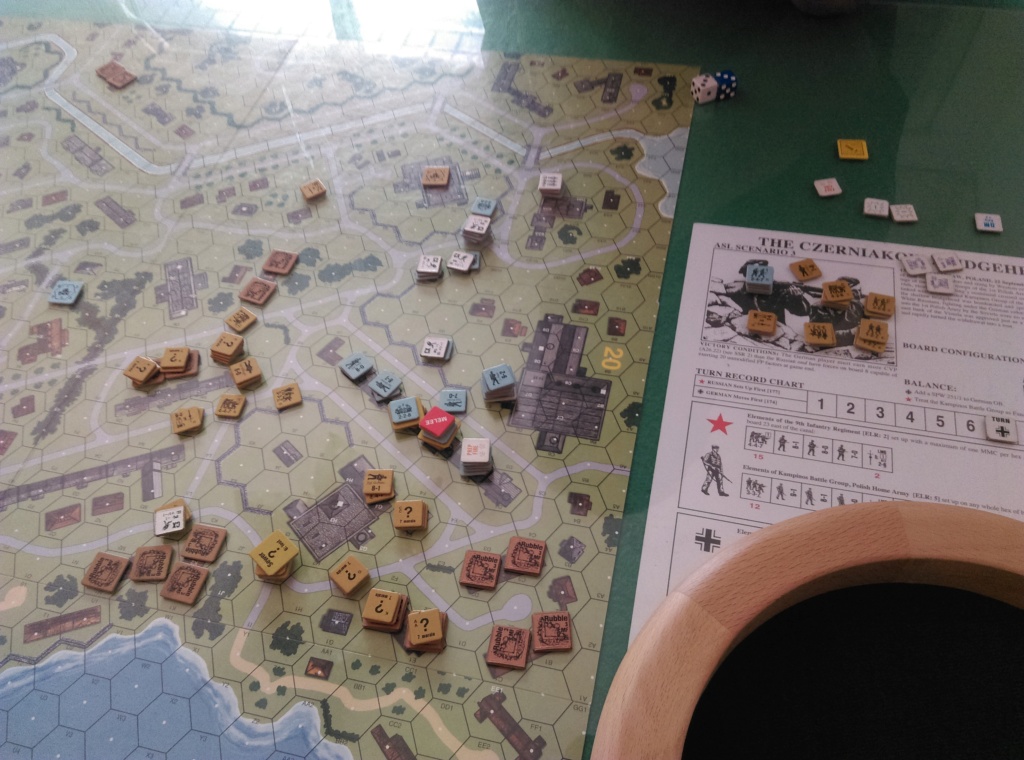 Over the next couple of game turns, the Germans and Allies were able to move without fear of interdiction, but I think that favored the Allies more. Robin has now left himself a bit to do in the final 2 turns. 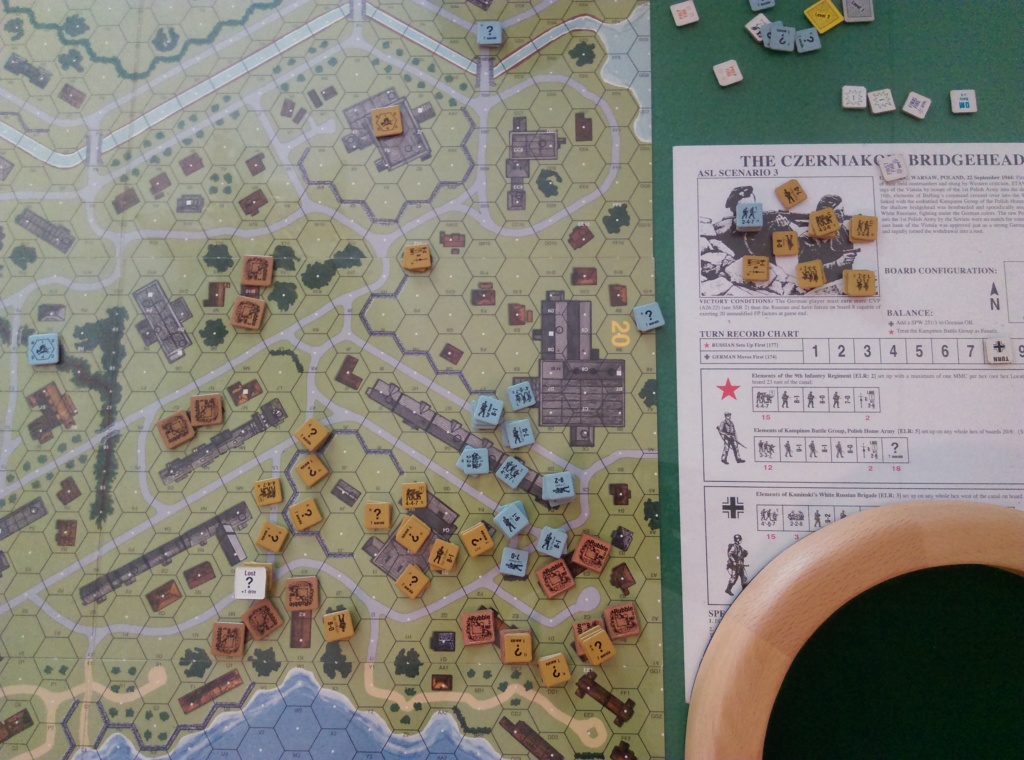 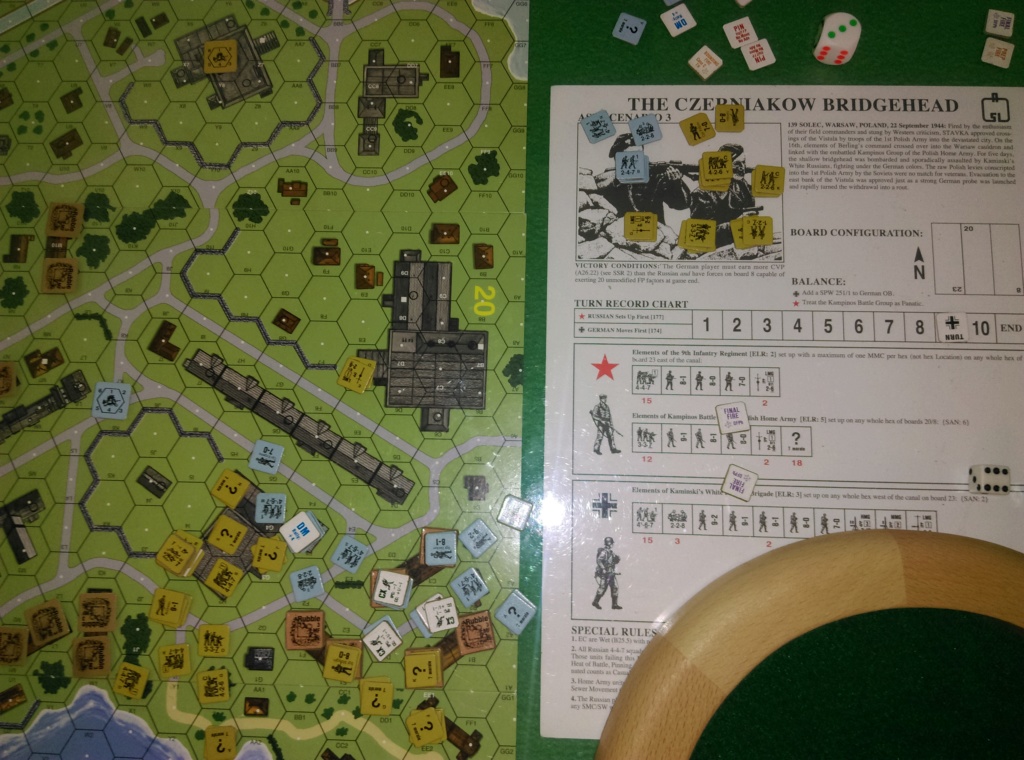 Robin pushes on down the north flank, but by the start of the final turn, there is a flame (resulting from a MOL attack) in 20B1 and Russian units to put residual in 20A1, and for the first time in the game, I would say that the Allies have the advantage. As you can see by the photo, all of the action is now taking place in just a small area of boards 20 and 8. 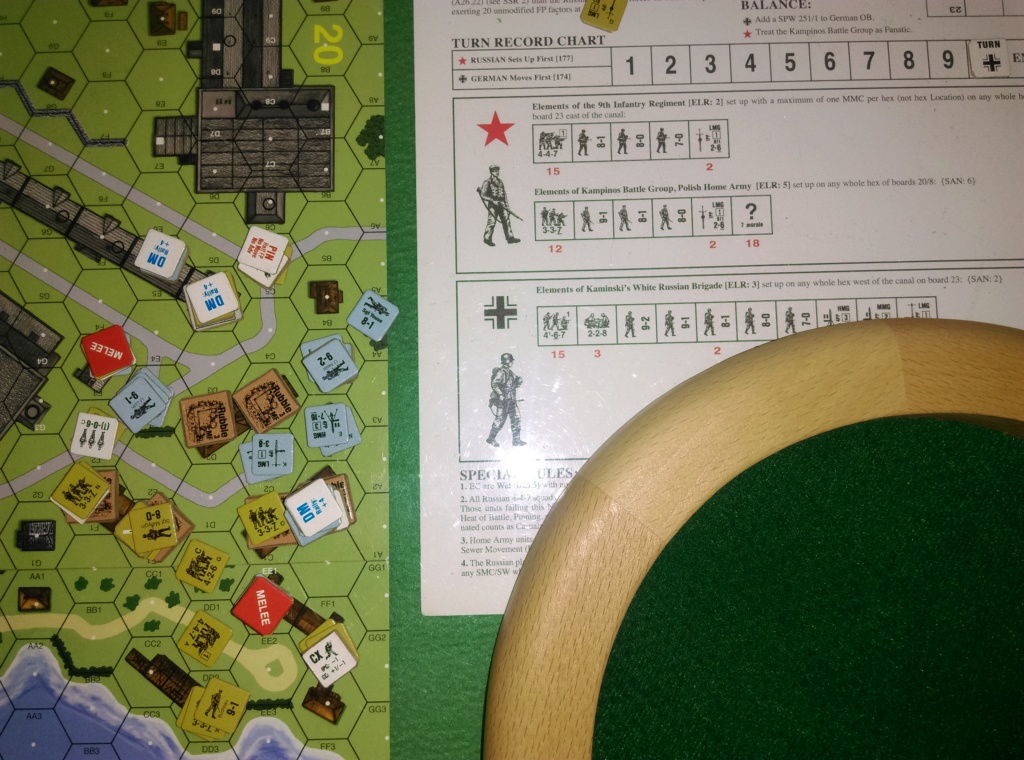 And so in the end, the Germans have to make an optimistic rush onto board 8 across the open, and ended up a bit short, as a melee in 8EE1 does not go their way, and only 1.5 squads (10FP) make it to 8GG1. We somewhat stopped recording CVPs, since the Germans were well ahead (having successfully exited 3 full squads of prisoners off the west edge of board 23 earlier). This really was a fun scenario to play, and it is always a rewarding experience to play in a game of ebbs and flows (and on those occasions that the flows go against you, it can be good to remember that one day you might find yourself on the back foot, and its a comfort to know that fortune can flow your way). 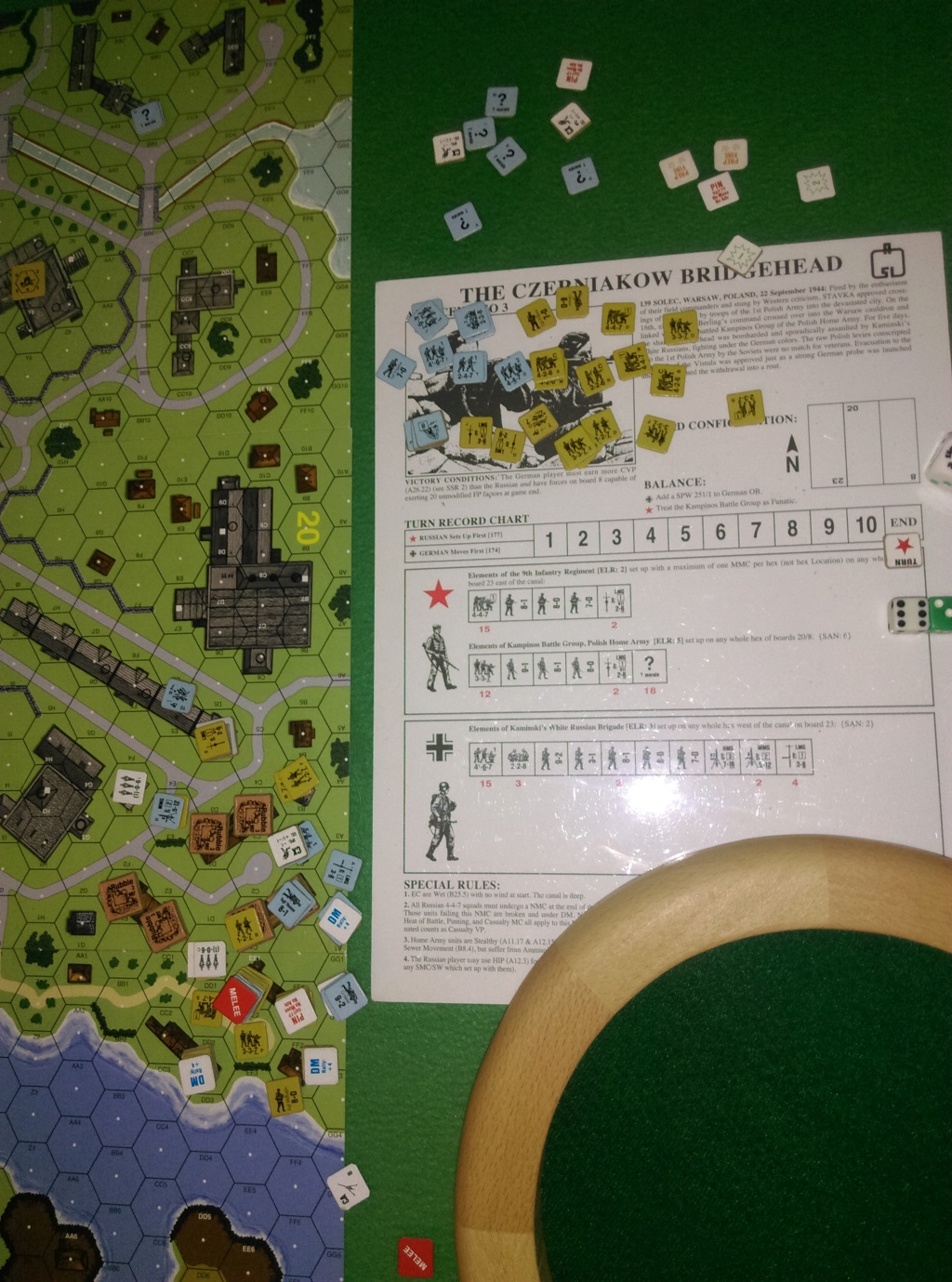