Yesterday, Little Wolf and I played another ASL infantry scenario. The scenario chosen was J-103 "Lenin's Sons", which was an ideal choice for Little Wolf to become more familiar with DCs and FTs. It also happens to be quite a good scenario, too !!! In this scenario (which uses rows D-Z of board 42), the Germans need to control 8+ building/rubble hexes (out of 10) on/east of row K without sustaining more than 16 CVPs (we played with Russian balance, so this was reduced to 13 CVPs). The Russians defend with 8 (mostly elite) squads, 1 crew, 1 hero, 3 leaders, and 7 SW. The Germans attack with 13.5 (elite) squads, 4 leaders, 7 SWs. For a bit of surprise, the Russians start with all units concealed, 9 dummies, and 1 HIP squad-equivalent allowed.

The Russians need to cover the open terrain on the south flank and at the same time slow the Germans down as they move along the forest on the south side of the map. Little Wolf defended as Russians and put most of his forces covering the woods, with the heavy weapons covering the open (south) portion of the map with heavy weapons in and around J3, K5 and L0. I attacked as German, and also had most of my forces in the woods, while 4 skirmishing half-squads with a 9-2 led MG nest looked from an over-watch position in level 1 of V2. In turn 1, a Russian SAN dr of 1 selected this location, and the R/S drs did not go well for me...... 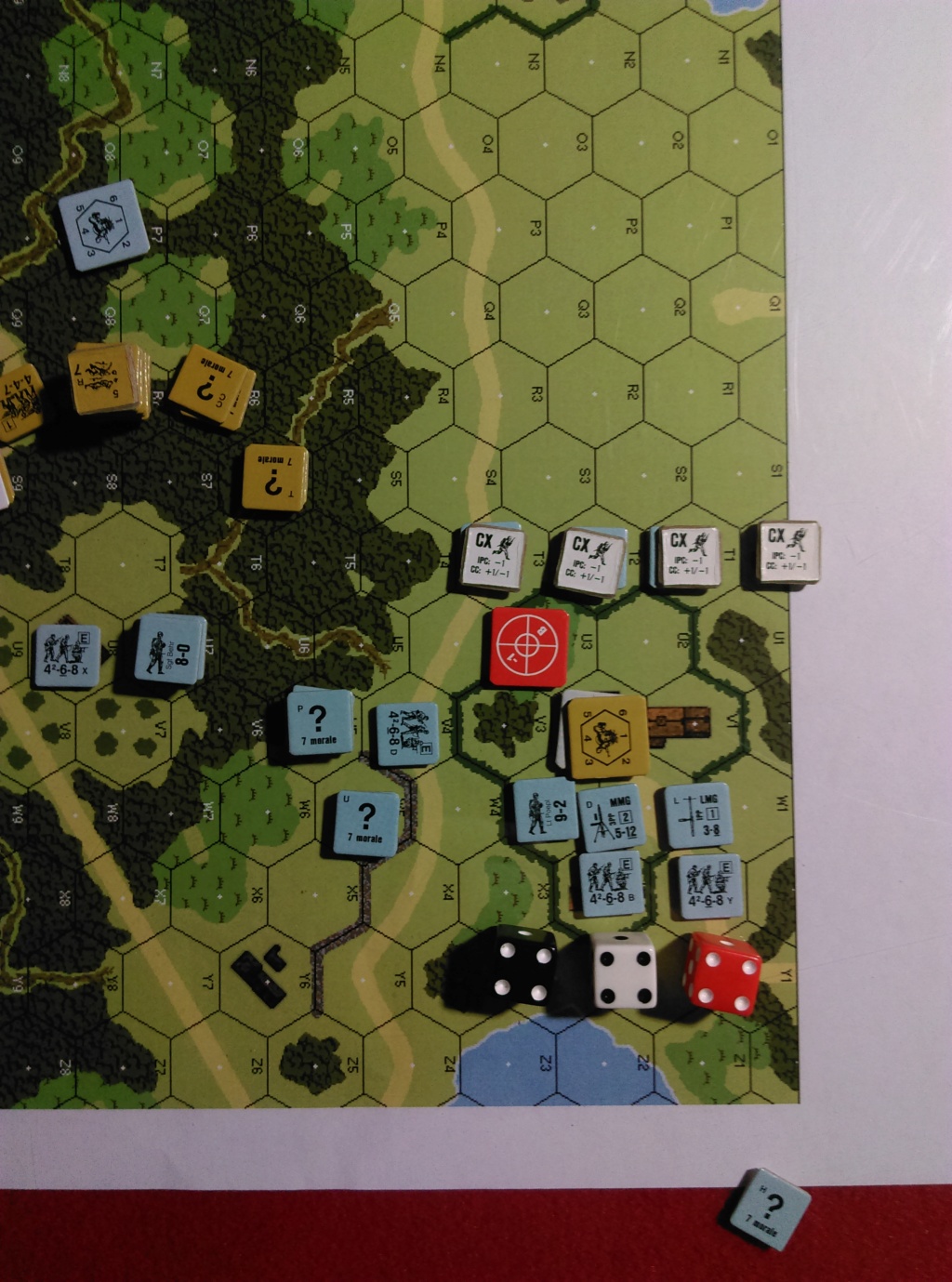 Losing the 9-2 leader early in the game really put me on the back foot; not to mention costing me 3 CVPs. It took some time to work through the woods, and in the meantime, my skirmishing half-squads had to pay it cool for a while. But in about turn 4, I managed to break the back of the Russians in the woods, and by the end of turn 5, I was in a position to try and make a mad dash for the 8 buildings required. I also rebuilt the shattered MG nest, and an 8-1 took over as their fire director.... 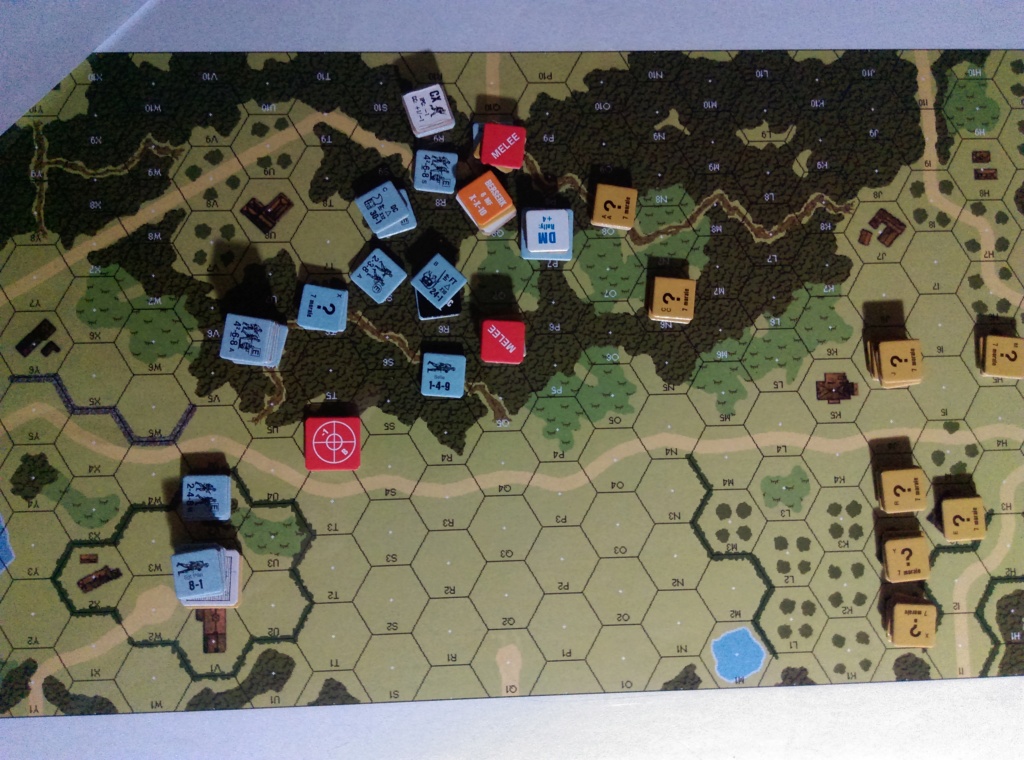 The HIP Russian squad (and HMG) was found turn 5 when a half-squad bumped into their location (M3); a number of my units were a bit exposed in the open, but luckily for me, the HIP squad cowered, and I was able to escape the trap. By this time, the Russians had 3.5 squads left to defend the Russian 'Alamo' of I3, J1, J3. Unfortunately, the (previously HIP) 628 squad went Berserk (A15.4), and perished in the resulting suicide charge. The Russian crew went to man the now dispossessed HMG, but the German SAN broke him, and this left the Russians having to defend 3 buildings with 2 squads. In the last turn of of the game, a previously generated German 149 hero was able to draw large amounts of fire when approaching with a DC in hand. The resulting fire killed him, but the fire drawn allowed my infantry to pick up the 8 undefended buildings by the final MPh, and in the last CCPh, I was able to claim a 9th building. 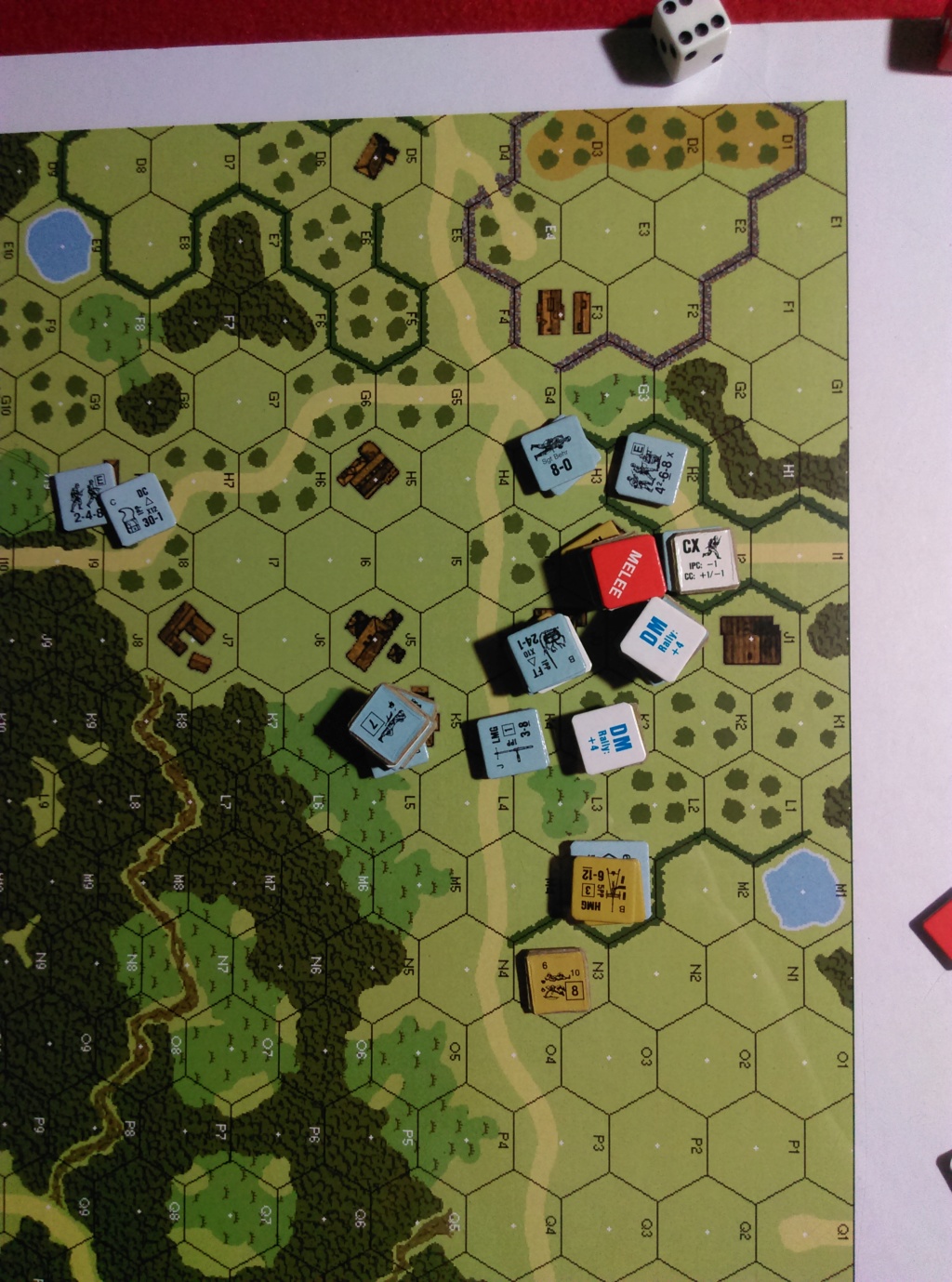 Little Wolf played a pretty good game, and I was pleased to see that he could design a decent defense and understand what it had to do. He also showed good flair with a thrown DC, which messed up a couple of my engineer squads !!! It was a bit unlucky for him to have his HIP ambush spoiled by first Cowering (A7.9), and then by going Berserk. A couple of points he will take away was that it can be a drawback to HIP a dominant weapon like a HMG, as it can lead to it being too dormant. Another trick that I think Little Wolf missed was not putting the 10-0 Commissar in the woods, where his quick rallying would have brought back broken Russian squads a lot quicker than his lesser leaders ever did.

Still, it was a close game, and I can see that Little Wolf is finding his ASL feet in good time.