Yesterday, we had another Taipei ASL meet in Ximen, with about 7 persons present. While the others were playing ASLSK, Robin, Little Wolf and myself played ASL-102 "Point Of The Sword", as it is well suited for 3 players, and I wanted to take the opportunity to teach them about Rowhouse (B23.71) buildings, Fortified Buildings (B23.9), and how to create a Breach (B23.11) using a DC.

In this scenario, the attacking British win by controlling 2 of the 3 buildings containing a Fortified Building location. The Germans defend the stone village of board 10 with 9.5 468 squads, 3 leaders, and 6 SWs. The British attack initially with 10 648 squads, 3 leaders, and 7 SWs, and on turn 4 they are reinforced by an additional 12 458 squads, 2 leaders, and 8 SWs. I played the defending Germans, Robin played the initial attacking British, and Little Wolf played the reinforcing British. We were playing with British balance in effect, so Little Wolf got to enter his forces a turn earlier on turn 3.

I defended in a  fairly up front defense with the 50mm mortar team defending the the east flank, and most nearly everything else defending the west flank. I wanted to buy a little time in order that I might link up the building blocks by digging some foxholes (see B27.11, Entrenching). My defense did a good job of keeping the British at bay, and after 6 turns, I was still defending the fortified buildings with 5 unbroken squads and 2 '-1' leaders, and it looked like Robin and Little Wolf hadn't gotten into position fast enough. However, my 8 morale turned out to be barely a rumor, as my units simply couldn't pass a morale check, and British squads had no difficulty in breaking into the fortified buildings. 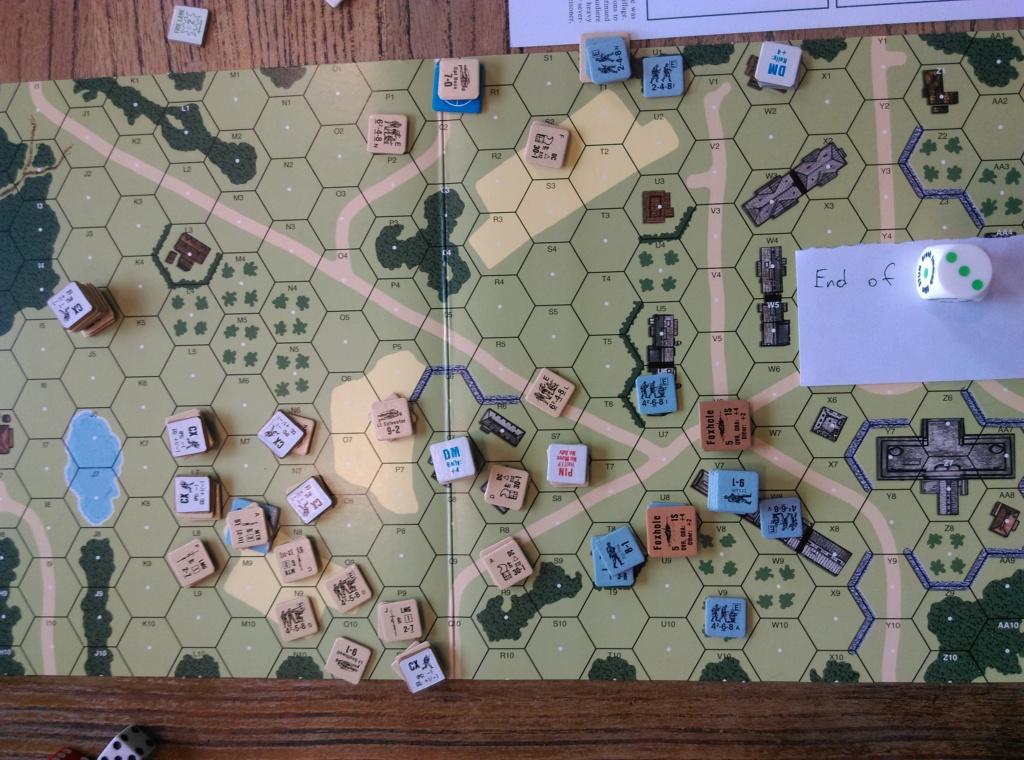 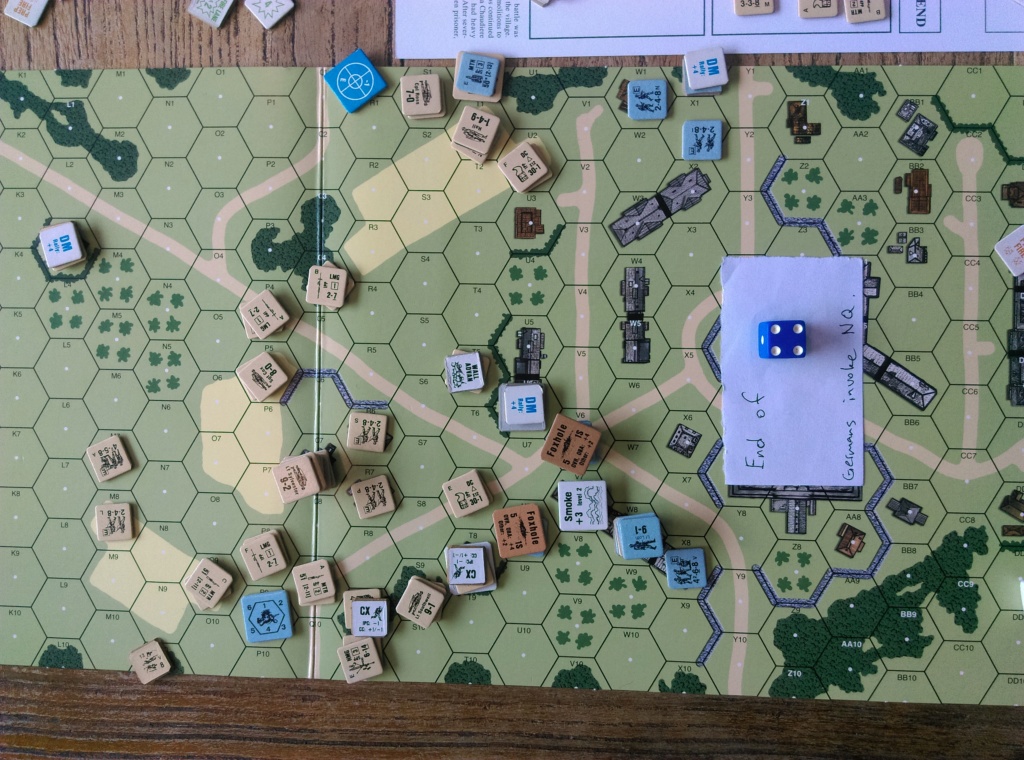 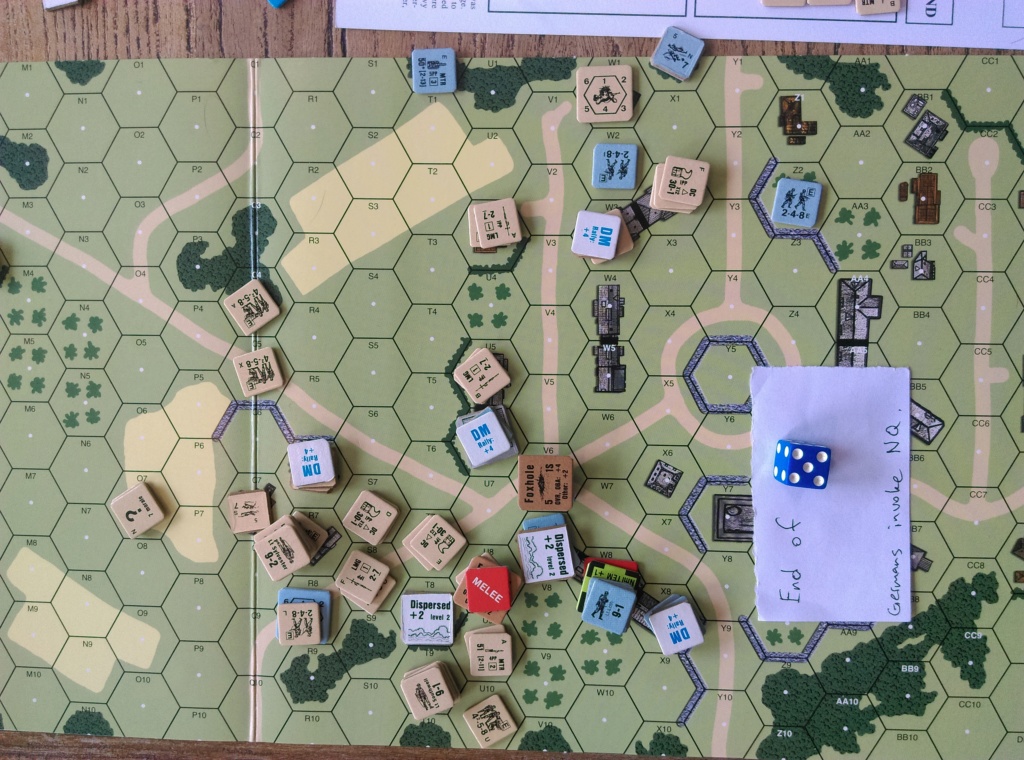 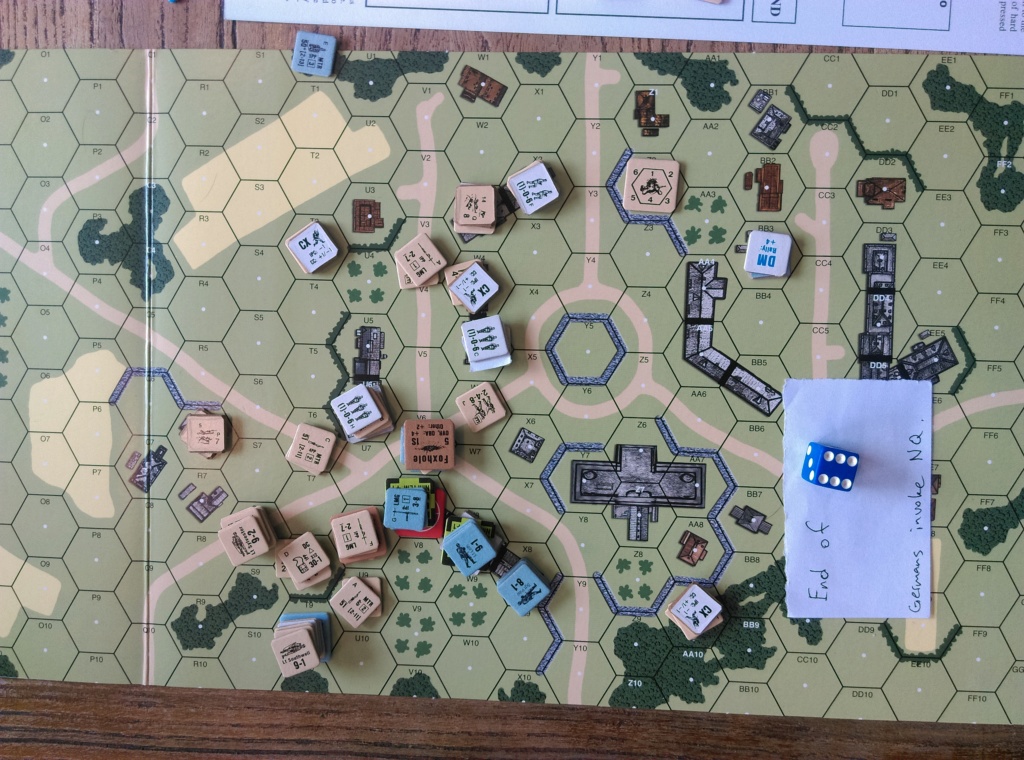 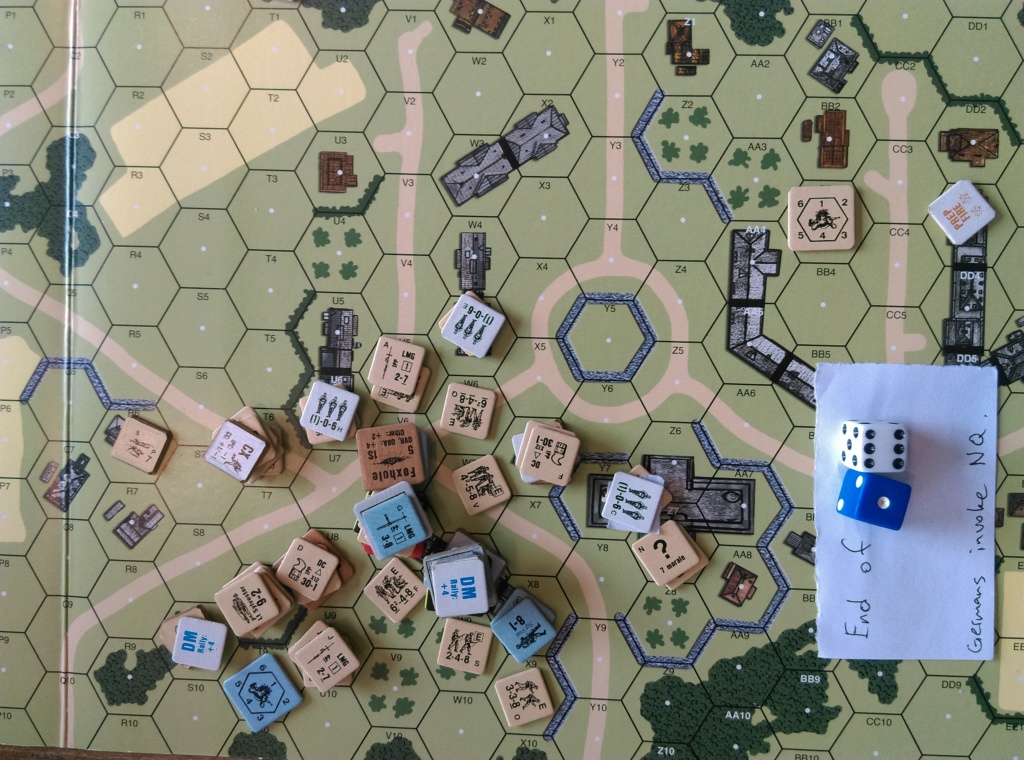 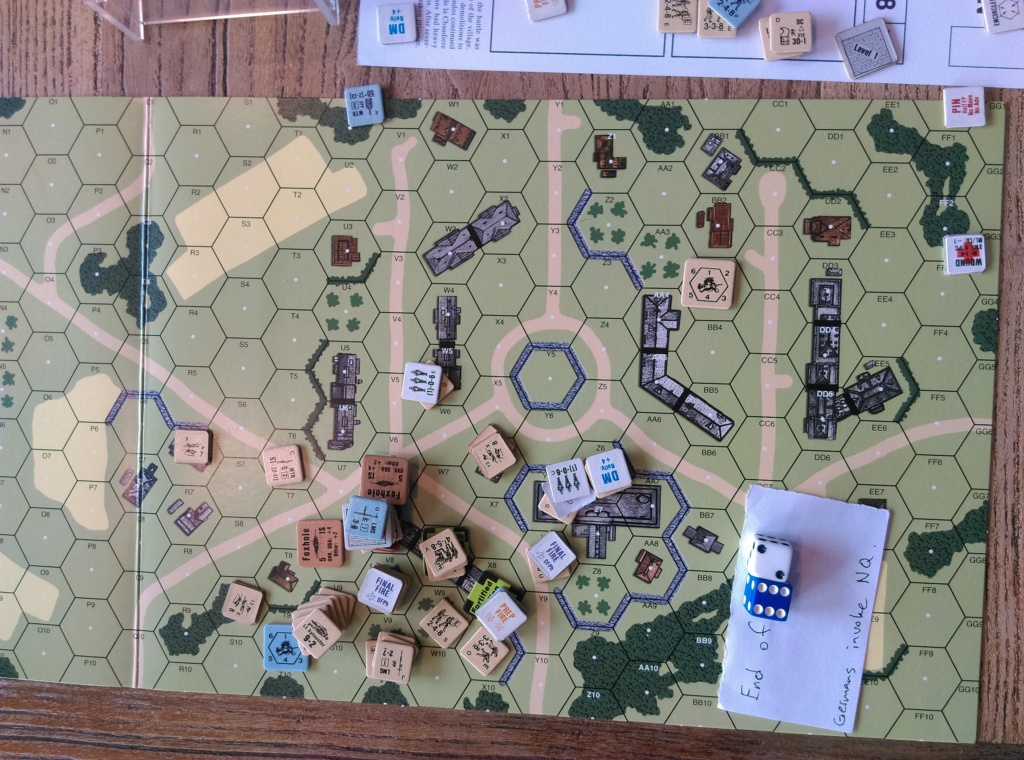 When both of my squads in W8 broke in the last turn, Robin and Little Wolf actually thought that the game was as good as over ,and were actually starting to pack away the counters, but I was not yet done, and my broken units retreated upstairs, hoping for some late rallying and last turn heroics. To control a building requires sole occupation, so even broken units can serve a purpose (although usually just for a short time). In the last turn of the game, I did manage to rally 1 leader in level 1 of W8, and so the British would have to break the leader in the DFPh in order to claim their second fortified building. The leader passed the first MC thrown his way, but failed on the second one (and really the final shot that the British had), giving a narrow victory to the British in the end, which at least made a close game out of a bad session of MC dice rolls (and no doubt demonstrated how a player can fight through such setbacks in ASL and still have a decent chance to win).

Initially I was a bit disappointed with the way my defenders broke so meekly in the final 2 turns; not because it ultimately cost me the game, but more because I had hoped to see a situation where the British would need to use smoke and DC Breaches to overcome the Fortified Buildings. But upon reflection, it was good to see Robin and Little Wolf both manufacturing effective fire-groups, and using the 2" mortar to good (albeit brief) effect, which ultimately made the game an enriching experience for the new guys. 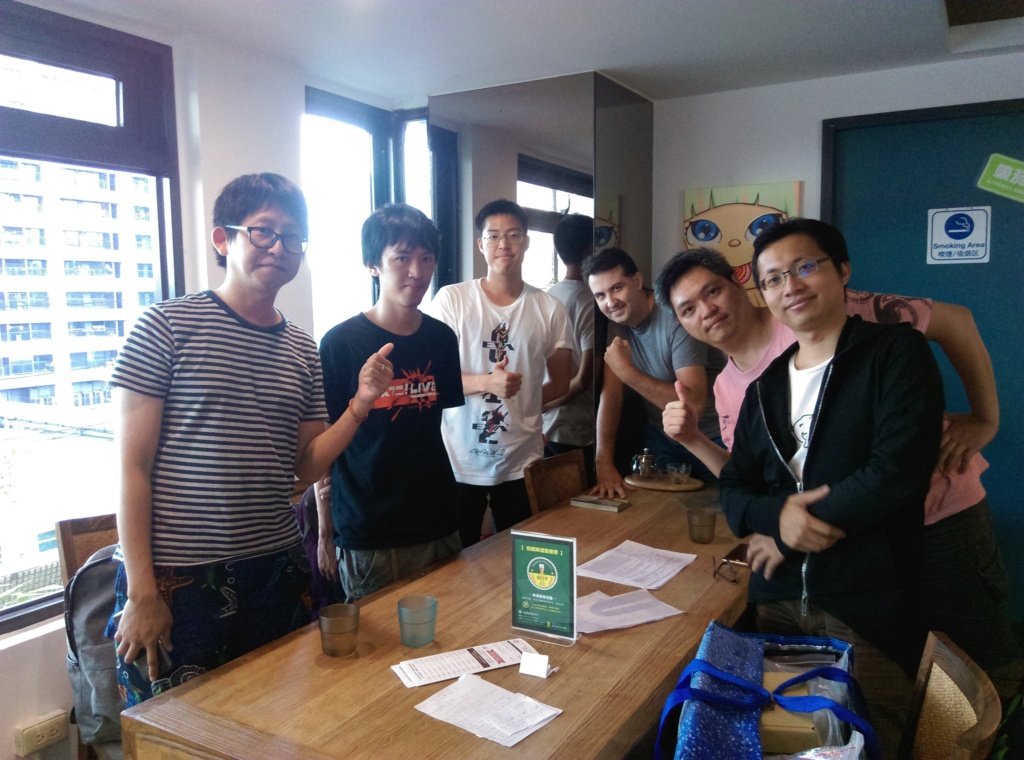