Last Monday, Robin and I finished another AFV training scenario. The scenario chosen was ASL-125 "First Crisis At Army Group North". Robin played the attacking Russians, whilst I played the defending Germans. Russian balance (increase the game length to 9 turns) was in effect.

The 50mm guns and 37L ATG gun match up well against the light Russian tanks, but are not really strong enough to penetrate the KV-1 tanks; Deliberate Immobilization (C5.7) is always an option, but can only be used at ranges of 6 or less. The 88L AA gun can penetrate the armor of all Russian tanks with relative ease, but because it is a big heavy gun, it is not easy to position in a hurry. The light screen of infantry have 2 DCs, which can also be used against the Russian tanks if they can get close enough to them.

The Russians really want to avoid exposing their light armor to the light German guns, instead dueling them with their heavy KV tanks. Meanwhile, the Russian infantry should work forward to position from which they can overrun the heavy AA gun; Human Wave (A25.23) would be most ideal for this. The light tanks can be used to help get the Russian infantry past the German infantry. Only the T-26s are without radios, so the Russians can at least be a bit more flexible than usual with their AFVs.

The 37L AT gun must begin the game in tow, so I placed it and its halftrack in x4 to cover board 4. I had a squad and leader in 5R6 attempting to kindle, with a covering PzIIIG in Q6 to complete the coverage of board 5, while the rest defended board 4. In turn 1, I used all the SdKFZ 7s MPs to move into 4A4; it would have been easier to move and unload in an OG hex, but that might have left the AA gun vulnerable to Overrun (D7). I had no success with the kindling in 5R6, but by then it was apparent that Robin was advancing along board 4, so (except for the 37 AT gun and crew) The board 5 forces (with the infantry using halftracks) moved to reinforce board 4.

Robin lost 1 BT-7A to a PzIIIG, but was able to entrap and destroy 1 German leader and 1 467 squad. My 88L took a shot whilst still limbered, and rolled 11, causing malfunction. Shortly after that, Robin rolled a 12 on 1 KV's Mechanical Reliability (D2.51) DR, and I was able to place a DC versus another KV. The DC (unfortunately placed vs the turret front) caused a SHOCK (C7.4), and a 467 and (HOB generated) 149 tried to CC it, but without success. The CC team was later obliterated by a combination of Prep Fire and Overrun in the following Russian turn, and the SHOCKED KV recovered, with the 88L yet to repair (it had since unlimbered, and the SdKFZ 7 had driven away in the meantime), which left the game hanging in the balance. The recovered KV started to shoot at the (still malfunctioned) 88L and crew, but without success, whilst the light armor sought to stay out of the way of the German guns. A platoon of Russian infantry which had been earlier broken had since rallied, and was stacking with a leader to quickly reinforce the front, but from 11 hexes away, my 9-1 directs it, its mg, and that of the halftrack (halftracks are subject to leader direction, see D6.65) on a tight LOS for a 4-3 attack. The DR was a 3, resulting in a 2 KIA, and Robin rolled 5,1,1,1 on the random selection to KIA the leader and all 3 squads !!!!

Then, in Russian turn 5, I finally repaired the AA gun, and was able to quickly brew the KV firing upon them, which totally changed the situation of the game; Robin now only had 4 mobile tanks to work with and was forced to rush his exit of the map. Luck was not with him; a PzIIIG wrecked a second BT-7A and my 37L AT gun immobilized (and forced abandonment of) a T-26, which ended the game as a German victory.

Although this is not an easy scenario for the Russian, I chose it because it would give me a chance to demonstrate to Robin how guns are moved in ASL, and in our game we had a lot of action occur, which Robin will no doubt learn plenty from. 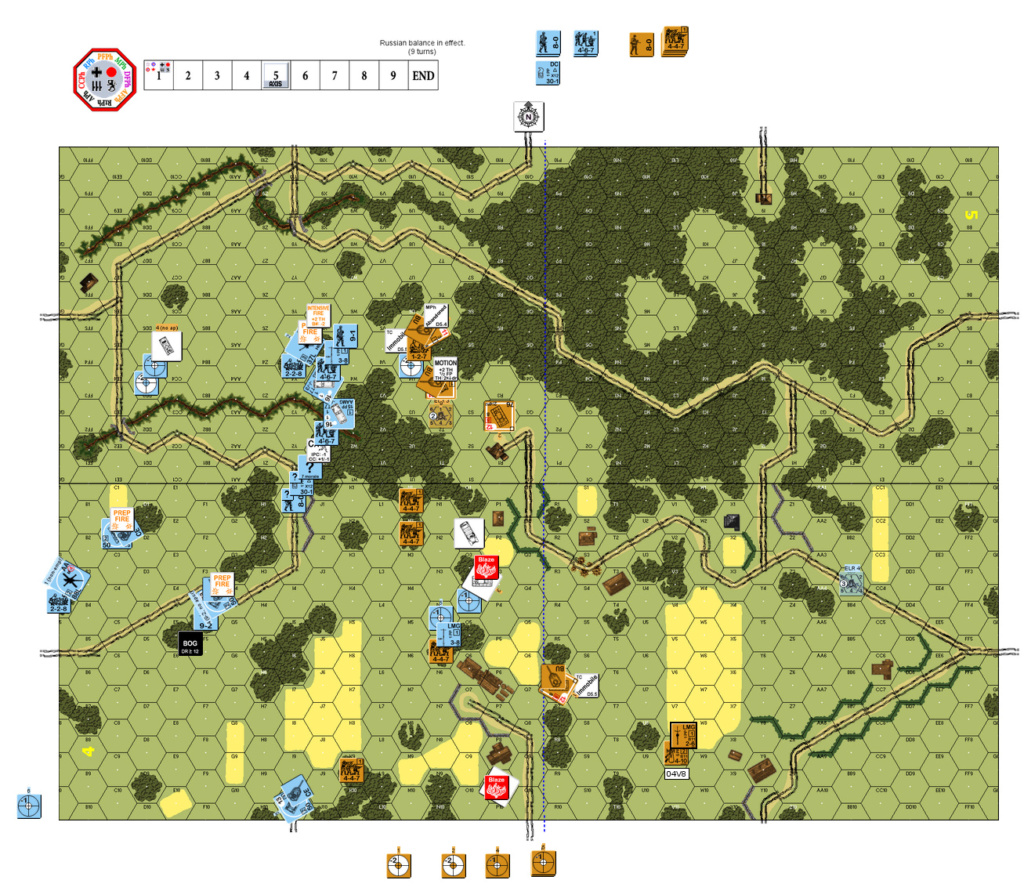