Yesterday, Robin came over and we played ASL-091 "Ad Hoc At Beaurains", with Robin as the attacking British, and myself as the defending Germans. British balance (add an 8-1 AL) was in effect.

This scenario depicts the attack of the British Matilda tanks in the area of Beaurains, just south of Arras. To win, the British have to exit 30 VPs off the east edge, from a force of 6 Matilda Is, 6 Matilda IIs, and a 9-1 armor leader (a total of 80 points, or 82 with British balance). However, for every 2 CVPs amassed by the British, the exit requirement is reduced by 1. To stop them, the Germans receive forces that arrive in penny packet groups across different board edges during the first 4 turns, a total of 4 37L ATGs (towed by Opel trucks and crewed by 228s), 5 squads, 3 leaders, 4 SW (including a radio with 100mm OBA), 5 Pz38tAs, 2 Pz IIFs, an SPW251/1, an SPW251/10, and an unarmed Kuebelwagen. From turn 6 onward, the Germans receive 2 88L AT guns (towed by SdKfz7s and crewed by 228s) on a dr in their RPh essentially 5 less than the current turn number.

Something worth remembering for the British (particularly when playing this scenario on VASL) is the D1.84 (Optional Armament) rule. Instead of all tanks having a '4' CMG, 2 of the Matilda Is have a 6FP (12.7) CMG, one of the Matilda IIs gets a 2 FP AAMG, and 3 more of the Matilda IIs get a 6 FP CMG (one of which also gets a 2 FP AAMG), so do remember to check out your counter mixes when on VASL. Of course, it was no issue in our game, but for VASL it really is worth a mention; consider the upgrades enacted in this example !!!

The armor of the Matilda tanks is very heavy, and until the 88L guns arrive, the Germans will have a very tough time penetrating the armor of the British tanks. The game is 15 turns long, and the British need it to be, as their tanks (in particular the turn 2 arriving, 6 MP, no road rate, radio-less Matilda Is) are rather slow, and with all of the guns that the Germans get, there will be ample opportunities, especially with Deliberate Immobilization (C5.7), however the Germans can't be suicidal, as CVPs amassed by the British reduce their exit requirement. If the Matilda IIs can travel swiftly enough (unlike the Matilda Is, they can use the road rate), the British can win by simply exiting 4 of them, along with an armor leader, so the Germans has to front vs the Matilda IIs. The Matilda Is will take a lot longer to reach the battle, and traveling in platoons will make them an ideal target for the 100mm OBA, which will affect them on a DR of 5 or less with concentrated FFE, and a DR of 4 or less using Harassing Fire (C1.72), some handy numbers indeed !! After the 88Ls arrive and unhook, the Germans can wreck virtually any tank that the 88Ls hit, but until then, its going to take some trial and error for the Germans to immobilize or kill British tanks.

The scenario occurs in May of 1940, so all Grain is Plowed Fields (B15.6), SSR 4 has it that only the 6N4 building is stone (with the rest being wooden), and there are no gullies or bridges existing on board 5. So, to make light work of remembering these terrain changes (which I feel makes play more enjoyable), I printed out VASL modified maps (half a mapboard per A4 sheet, 8 sheets in total), with the actual mapboard set up on a nearby table for LOS purposes. 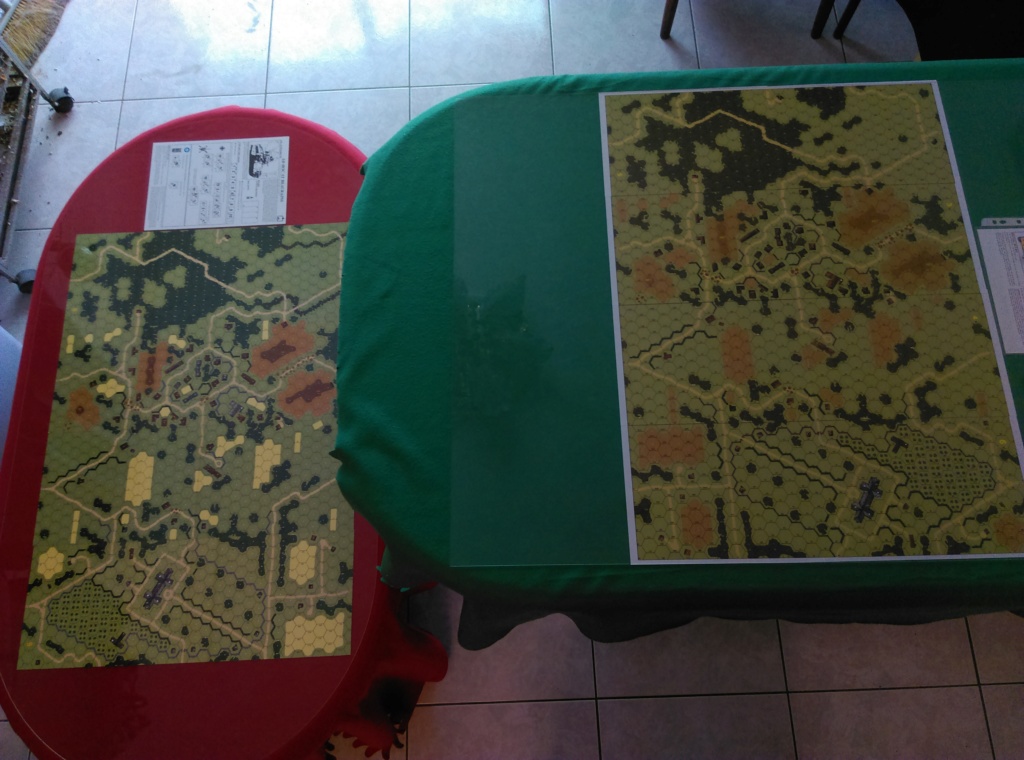 In turn 1, the Matilda II enter, with Robin using the road rate to maximize their moves. My first group of 2 37L ATGs wanted to use the 3GG5 - 3Y1 road, but that is now too dangerous with the approaching tanks. I instead have to drive 1 on to the hills (threatening to unhook in 3DD2, Hill 498), and another in direction of board 4. When towing the guns, I must take care to not be in a position where their transports will take fire, or worse even, be overrun. 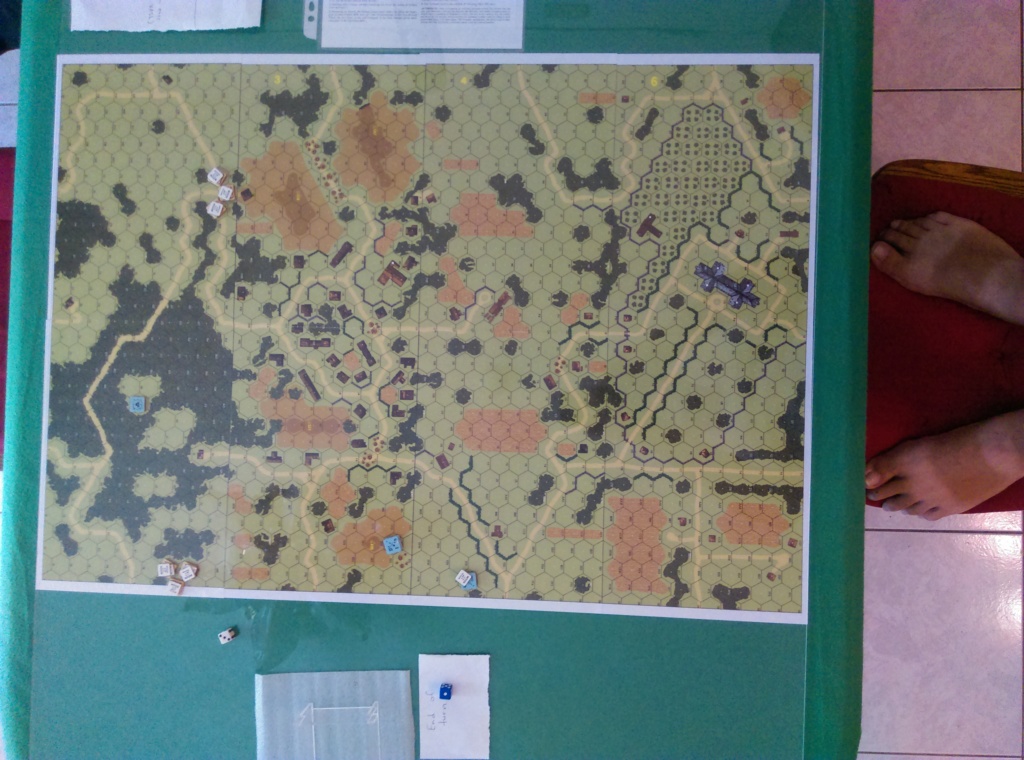 In turn 2, the Matilda Is arrive, and the Matilda IIs continue to push down the roads. By being able to unhook on Hill 498, I hoped that some Matilda IIs would be forced to stop and interdict it. With 1 Matilda II doing just that, and 2 more prowling ever closer, I am forced to unhook in CC1 (which at least has a quite nice LOS over the board 4 hedges), it's Opel simply having to make a run for it, while the other gun uses the road to get to 4Y1 in motion. My infantry and half-tracks also arrive, and push towards the buildings adjacent to 6Q9/Q10, so I can perhaps threaten the road with Street Fighting (D7.211) attacks. 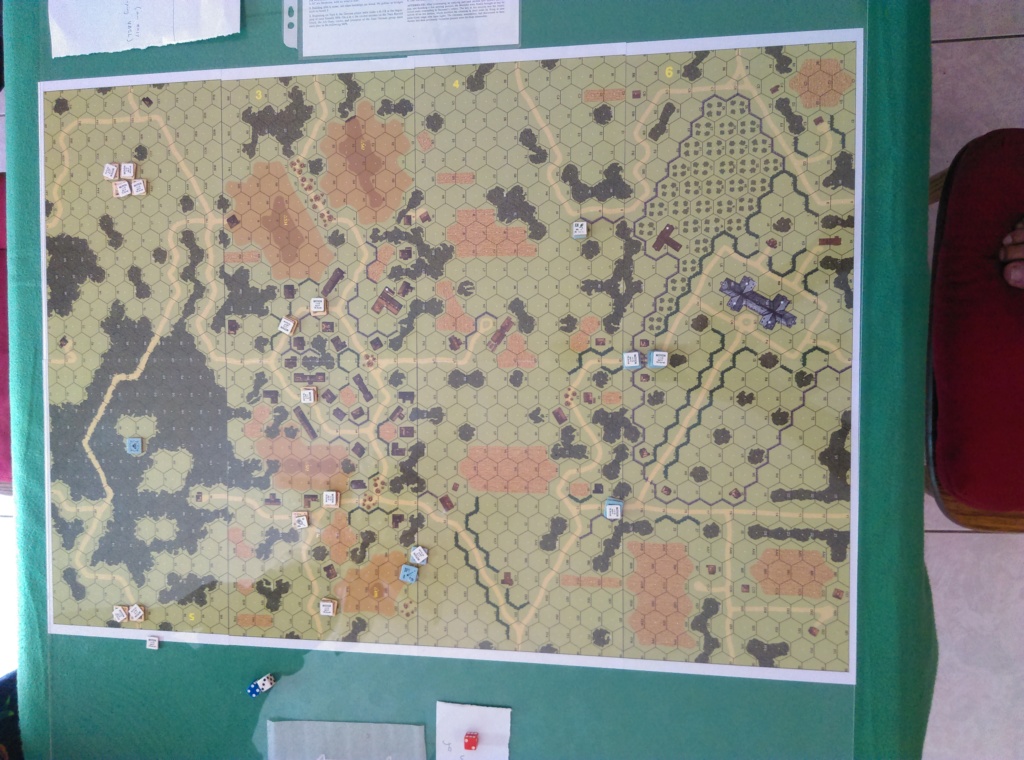 In turn 3, the Germans get no reinforcements, and the British push on. A 37L tries to D.I. (C5.7) a Matilda II, but no effects occur. The not-especially-fast Matilda Is begin to arrive on board 3.... 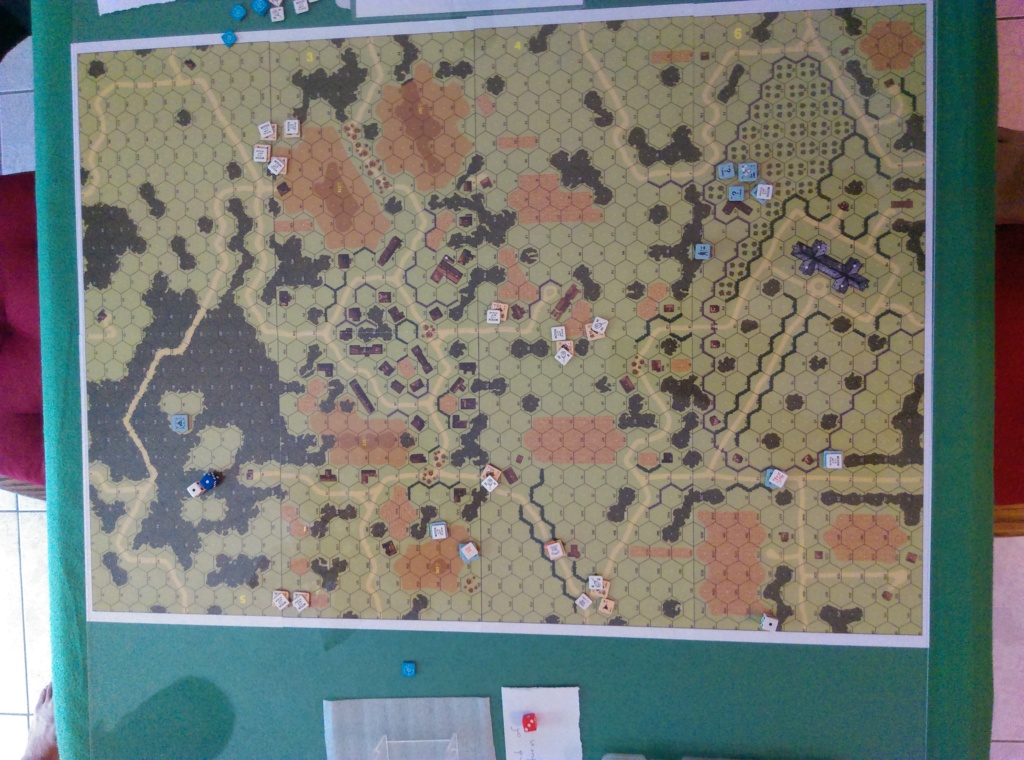 In turn 4, the Matilda IIs are already starting to arrive on board 6. I get the rest of my 'light' guns, as the balance of my leaders, light tanks, and the last 2 37L ATGs arrive. Due to the risk of getting overrun whilst still in tow, I am forced to unload the guns along the 6Z5 - 6GG5 road. My 5 Pz38tAs take up positions around board 6 to interdict the road, using the walls to get Hull Down (D4.2) where possible. The PzIIFs completely avoid the Matilda IIs (since their 20L gun cannot use D.I. vs them), and head off to engage the Matilda Is, or at the very least slow them down. Meanwhile, an 8-1 led platoon of infantry tries for 4P1 (so as to CC the Matilda II in 4Q1), but end up with all 3 squads broken, the leader pinned in 4N1. 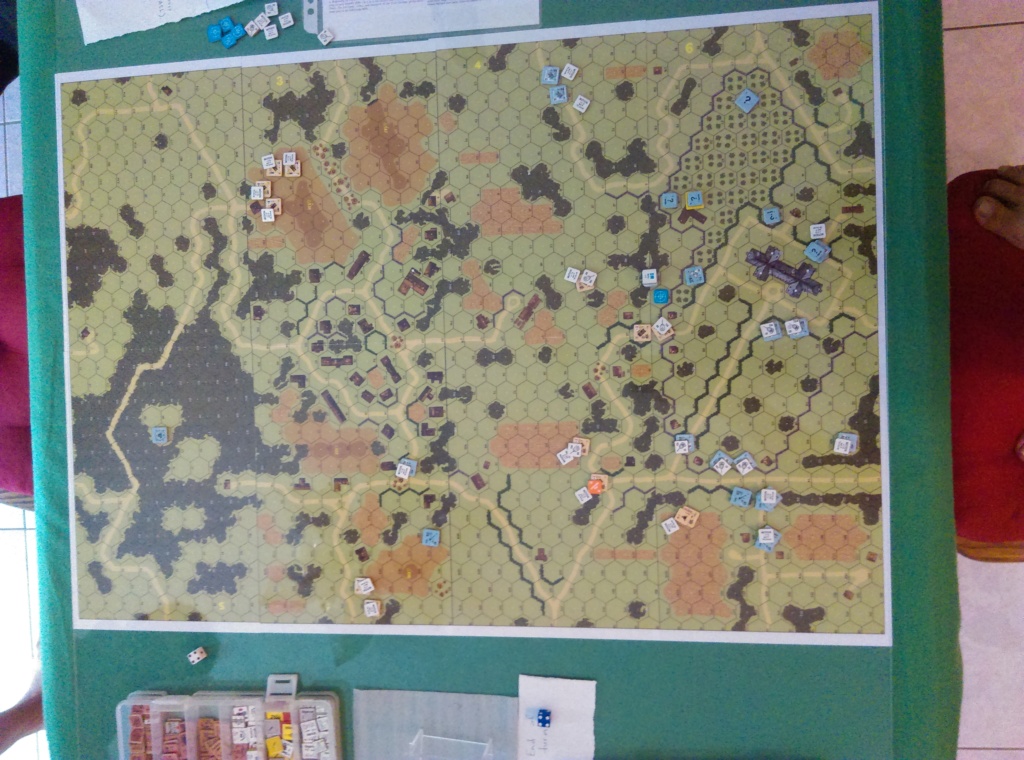 In turn 5, none of my squads rally, and 2 Matilda IIs surround them to enact their FTR destruction in the Rout Phase. The Matilda Is crawl up the board 3 hills, but my PzIIs are sooner in position to interdict them. My DI attempts start to make progress, and I manage to immobilize a Matilda II (I thought I got a 2nd, but forgot about the vehicle not that gives Matilda IIs very well protected tracks). I am able to push the ATGs into cover, and my 8-1 leader escapes with his life and both LMGs, but losing the 3 squads hurts. 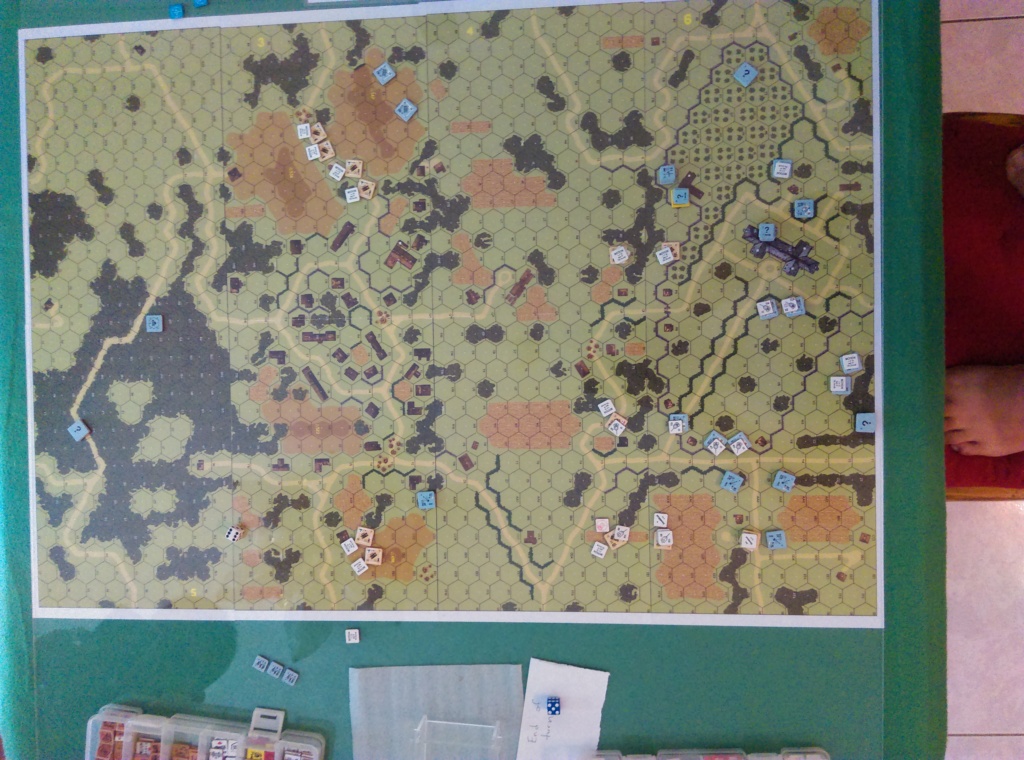 In turn 6, the Matilda IIs re-group after their infantry platoon destruction, and my ATGs manage a successful D.I. against another Matilda II. Meanwhile, the PzIIFs try to get Hull Down on Hill 547. No 88L AA guns arrive yet..... 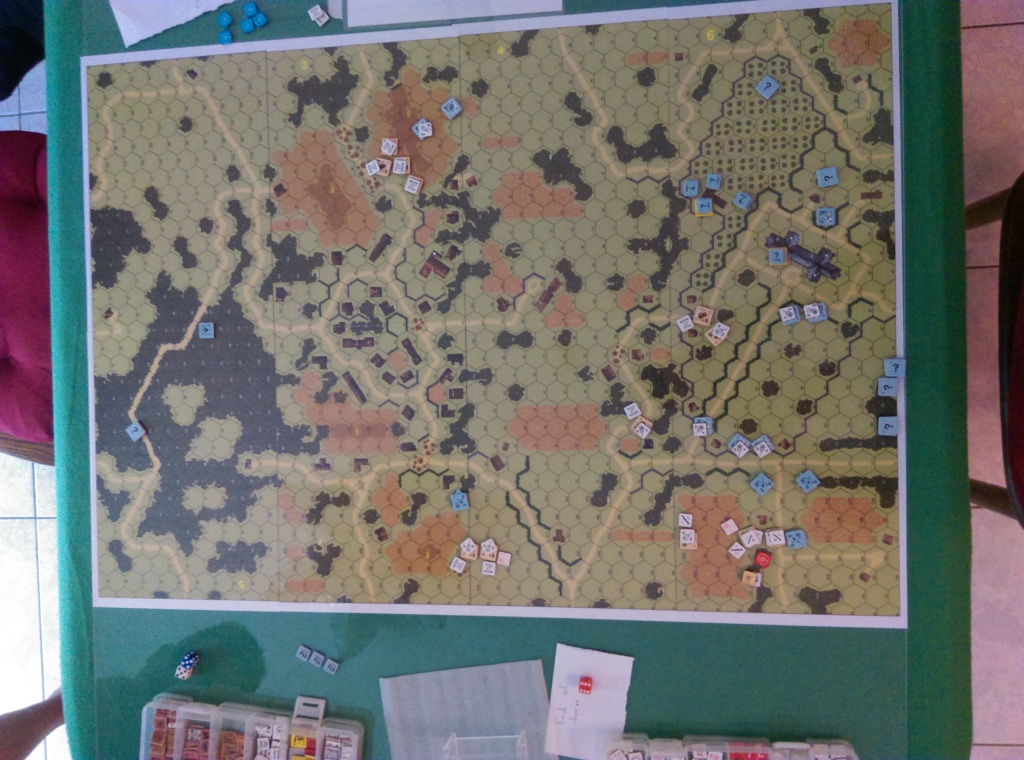 In turn 7, the 9-1 led Matilda II lets off a 7-shot ROF tear, which ultimately eliminates 1 37L ATG and crew (and was very near to eliminating 2), the remaining Matilda IIs stalk the Pz38tAs, which results in 1 Pz38tA being wrecked, and the Matilda Is storm Hill 547, with one (12.5 armed) Matilda brewing a PzIIF !!! However, in my turn, my almost forgotten ATG in 3AA1 has a ROF tear of his own which ultimately accounts for a pair of Matilda Is in 4BB7/CC6. The OBA meanwhile lands a SR accurately in 3G3, and the FFE then brews the Matilda I who killed the PzIIF. Some tit-for-tat revenge occurring there !!! Still no 88s........ 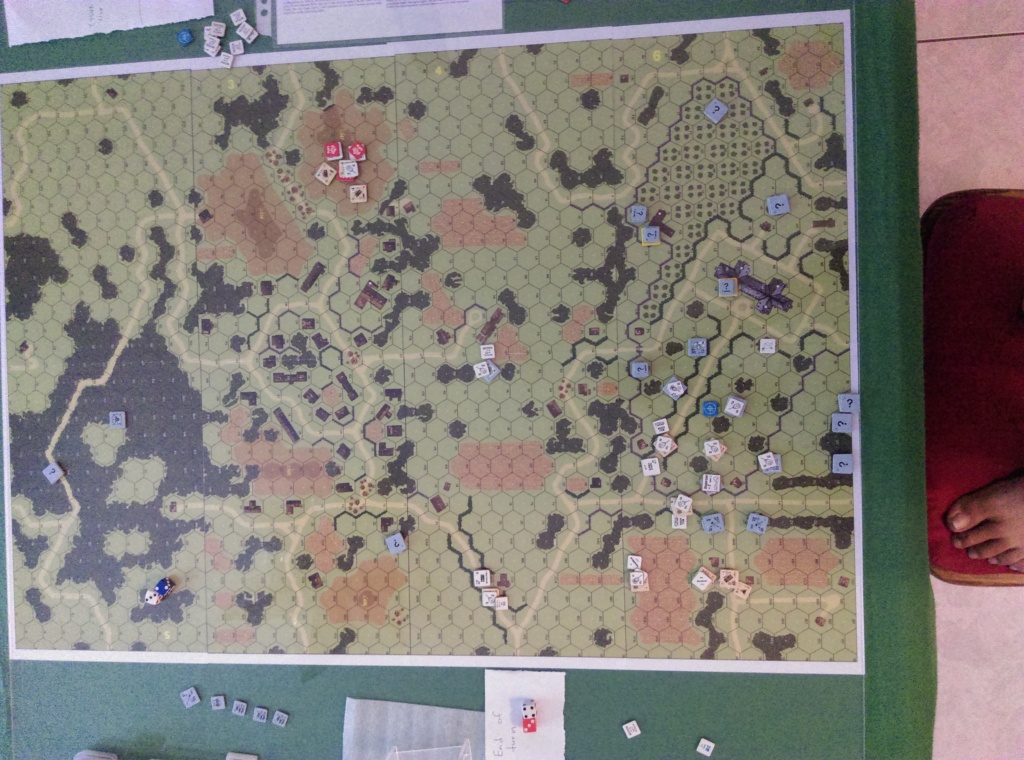 In turn 8, 2 Matilda IIs exit the map (along with the 9-1 for 16 Exit VPs), whilst the remaining 2 mobile Matilda IIs continue to engage the struggling Pz38tAs. However, the British achieve no success, and a Pz38tA immobilizes 1 and I brew the other in CC (with the help of my 9-2 infantry leader). The OBA immobilizes a Matilda I trying to escape the FFE, and the 88L AA guns arrive. The British have inflicted 20 CVPs and have 16 Exit VPs. They will need to inflict 8 more CVPs or get 4 more Exit VPs to win, with 2 remaining mobile Matilda Is.... 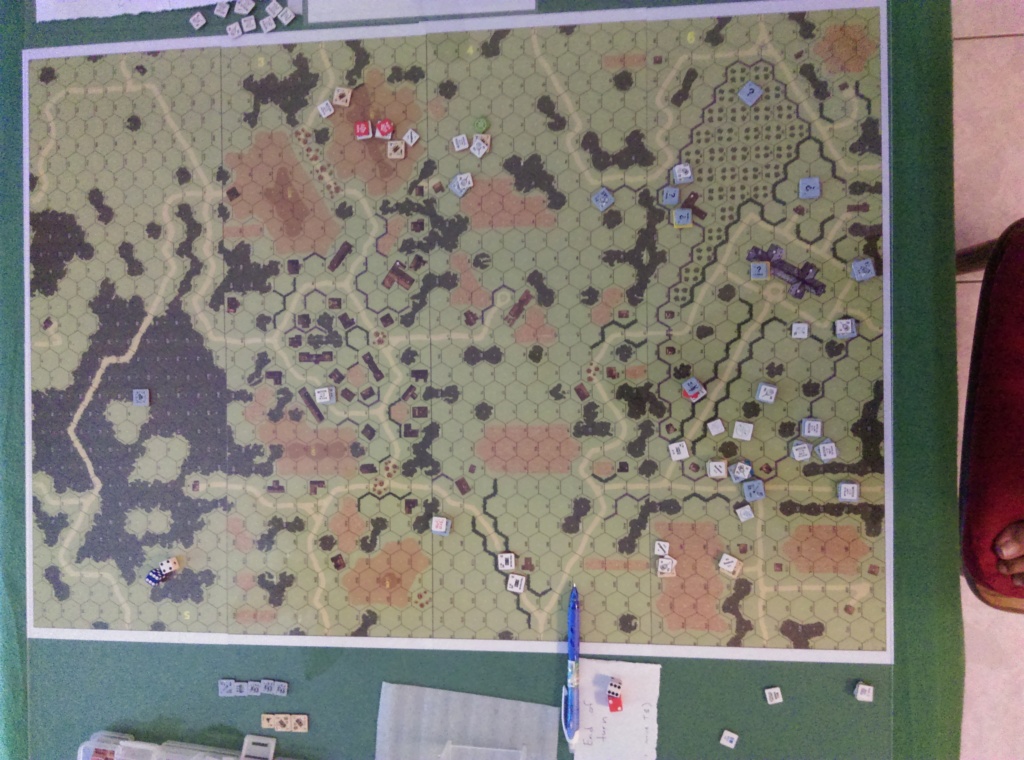 Turn 9 is a relatively quiet turn; only 1 of the Matilda Is races (hard to say with a straight face) for the east edge, the other having failed it's Non-Platoon Movement (D14.23) DR. Virtually all remaining tanks move to intercept the last 2 Matilda Is, as do a number of the now hooked up guns. The OBA offers no help, as I fail a string of Radio Contact Attempt (C1.2) DRs. 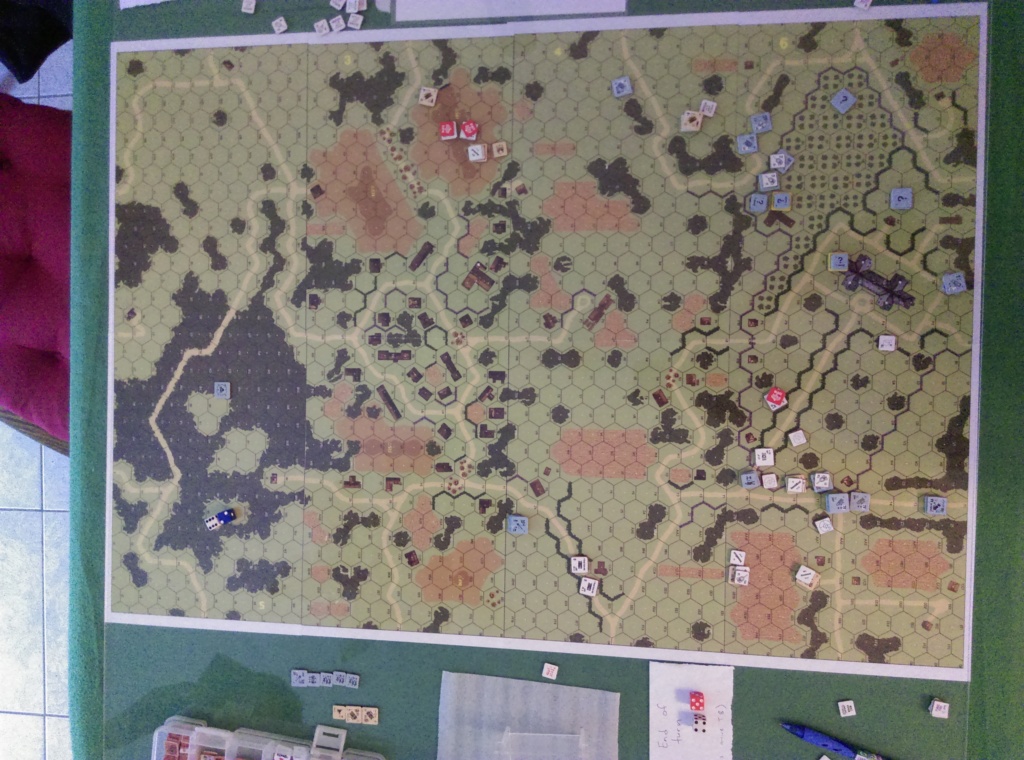 In turn 10, the Germans continue to close in on the lead Matilda I; a few hits are scored on it, but none do any harm. One of the 88L carrying SdKfz7s Bogs (D8.2) whilst trying to cross a hedge. A PzIIF malfunctions its MA, and a 9-2 led squad pins, right before it can CC an immobilized Matilda II (with no functioning MGs) in 6CC10, whose CC attack would have been a CCV6 @-4 !!!! 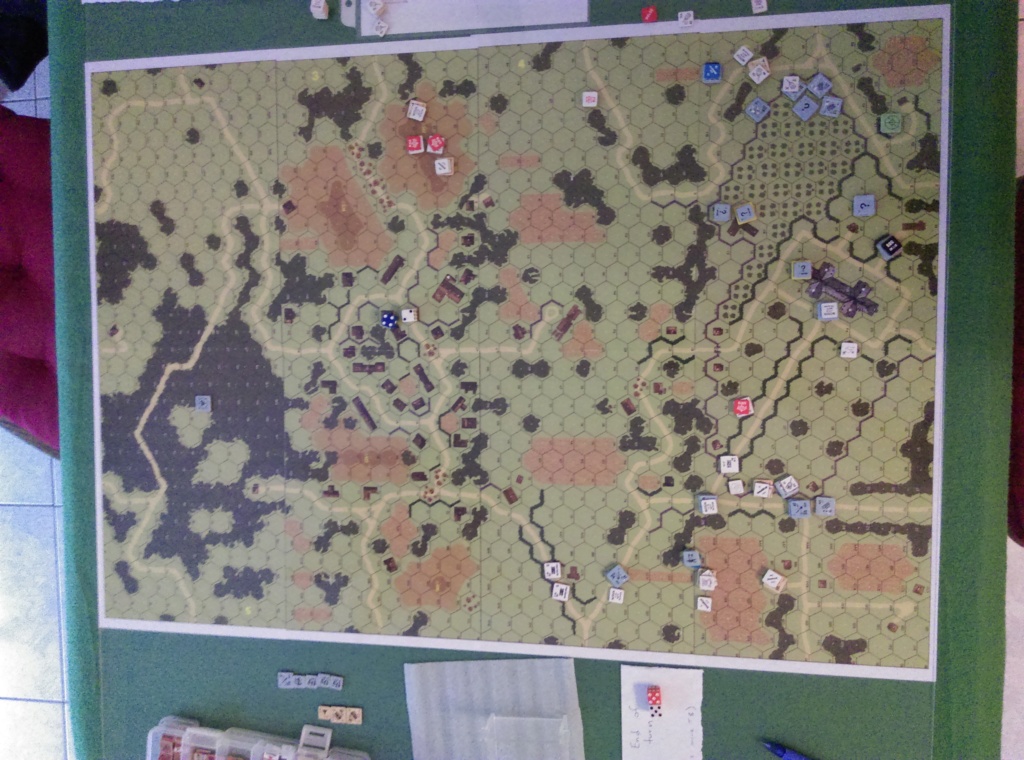 In turn 11, the lead Matilda I fails its D14.23 DR (ignore the incorrect motion counter in the photo), and a hail of fire slams into it, but without any effect (IIRC, a Possible Shock TC was passed). A previously immobilized Matilda II who was unsuccessfully stalked by my 9-2 and squad in the last turn, now has a chance to take out a truck with a gun, which it does by first immobilizing the truck, then getting a Critical Hit (C3.7), which wrecks the towed gun, but luckily for me, the passenger crew escapes harm. This takes the British CVP total to 23 (5 short of the 28 that they still need). 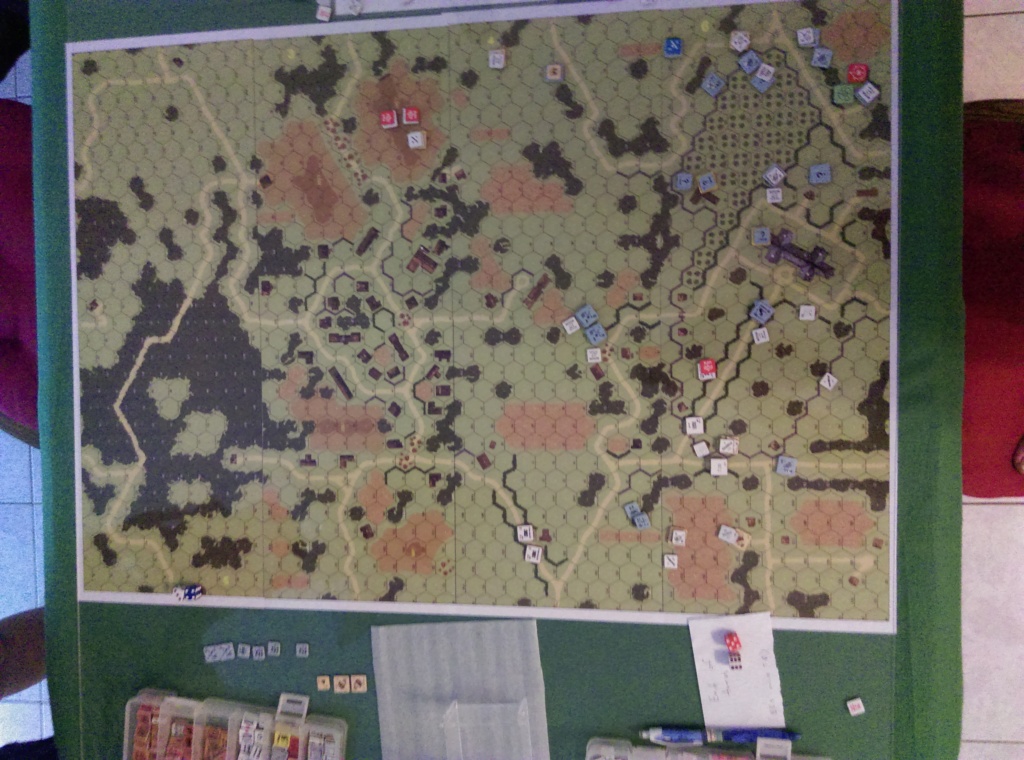 Turn 12 arrives, and with just 5 more CVP points required for a win, Robin decides to Prep Fire at the SPW251/10 instead of moving. With ROF and Intensive Fire (C5.6) Robin gets a total of 3 hits with his 12.5 MG, with the last TK DR being a crisp 4, which wrecks the half-track. The inherent crew fails the D5.6 Crew Survival DR, which takes the British CVP total to 28, which wins the game for the British in their turn 12 PFPh. 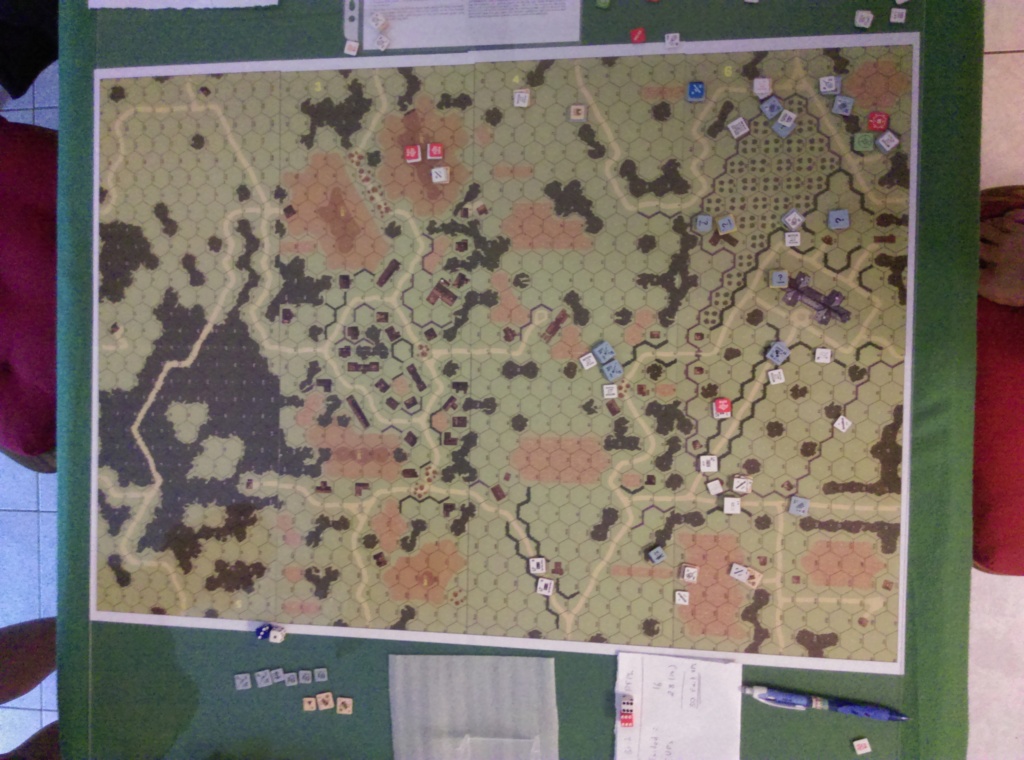 Quite an epic game, which despite seeming a large scenario plays very fast. We played 11 turns plus part of British turn 12 in about 5 hours, 40 mins. The 88L AA guns never fired a shot, but that doesn't surprise me a lot, as the close terrain of board 6 doesn't offer much in the way of good LOS for the big (and not easily moved) guns. A lot of fun had playing this old classic scenario.