This afternoon, Robin came over for a game of ASL. The scenario played was ASL-14 "The Professionals", with Robin as the attacking German, and myself as the defending (Yugoslavian) Allied Minors. No balance was in effect.

This scenario features a bridge crossing. To win, the Germans need one Good Order squad and one mobile AFV with functioning MA east of the river at the end of any player turn. The Germans have 8 squads, 2 leaders, 4 SWs, 4 PzIVEs, and 2 SPW251/1s. The Yugoslavs defend with 10 (Green, A19.3) squads, 2 crews, 2 leaders, 2 SWs, and 2 47 ATGs.

The Yugoslavs get to use HIP for their entire OoB, but can only set up on board 6, whereas they'd much prefer to be defending in a bit more depth. So rather than having a static find-me-if-you-can kind of game, the Yugoslavs are trying to also fall back. They have more squads, MOL, a 9-2, and 2 effective ATGs. But they also have an ELR of 2, which is going to lead to a number of Disruptions (A19.12) throughout the game. The Germans have a small, mobile force with plenty of FP. Their job is to blast their way over the river. If a clear path exists, a half-track (and its passenger squad) can race over the bridge, and if it makes it, the Germans automatically win. However, the thin armor of the half-tracks means that a way must be cleared first.

Once again, I used printed VASL maps to do the terrain changes (only the 6N4 building is stone, plowed fields, some island removed), and played on it, with parallel actual boards for doing LOS. It so nice to be able to do this !!! 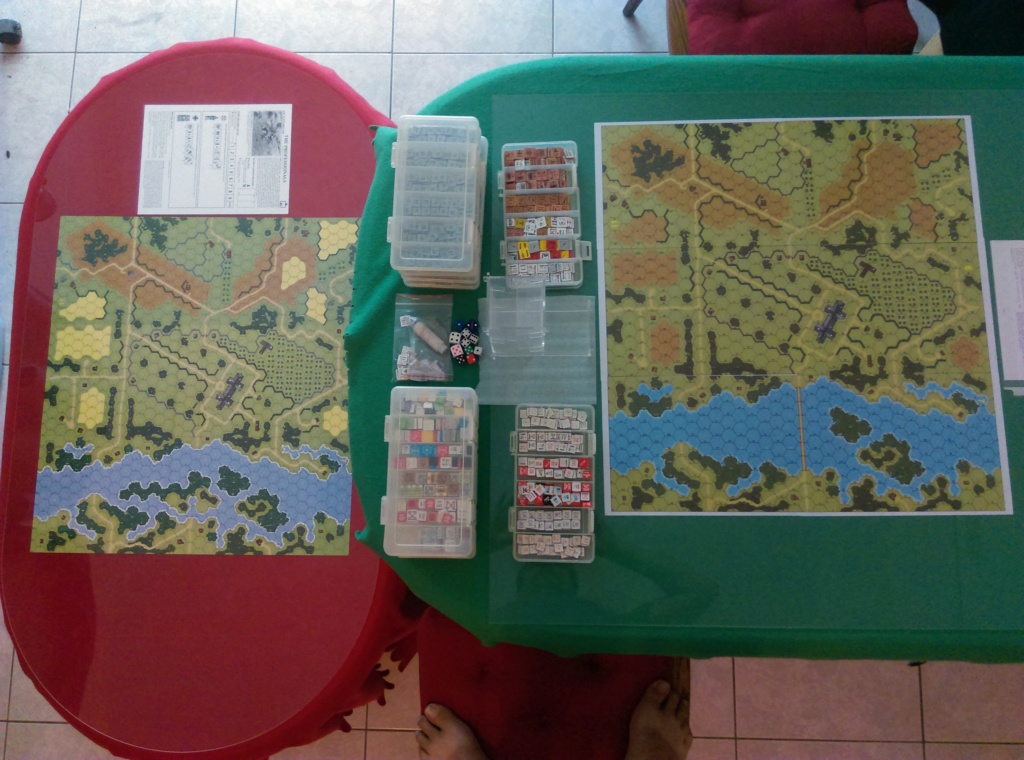 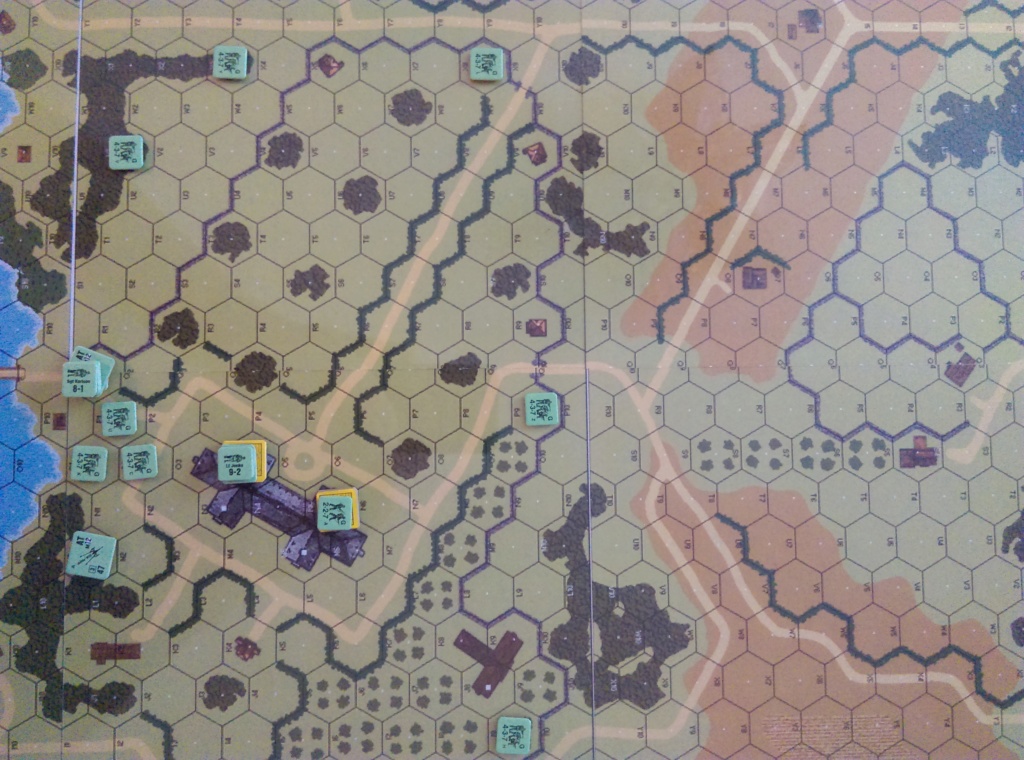 On turn 1, Robin brings on the Germans in bold fashion; a CE PzIVE enters 6Y10, my Bore Sighted (C6.4) location, but my 9-2  directed 4-2 attack does nothing. Such an attack can recall an AFV on 4 or less, so an opportunity missed. The tanks rumbles on to 6X9 and stops, where my HIP squad in 6X8 get a MOL, and attacks 12+2 vs the crew, TK 6+1 vs the tank, but only succeeds in making the tank go BU. Its Bounding First Fire attack then disrupts my squad. With the MMG having fired, Robin is able to quickly move on the others and in his AFPh, one PzIVE on an ITT th7+7 rolls an improbable (regular) hit, which gets a k/3,  wounding the leader, and again disrupting the MMG half-squad. A very poor start for me !!! I did get a foxhole in 6O1, and managed to move my guns, so something to cheer about. 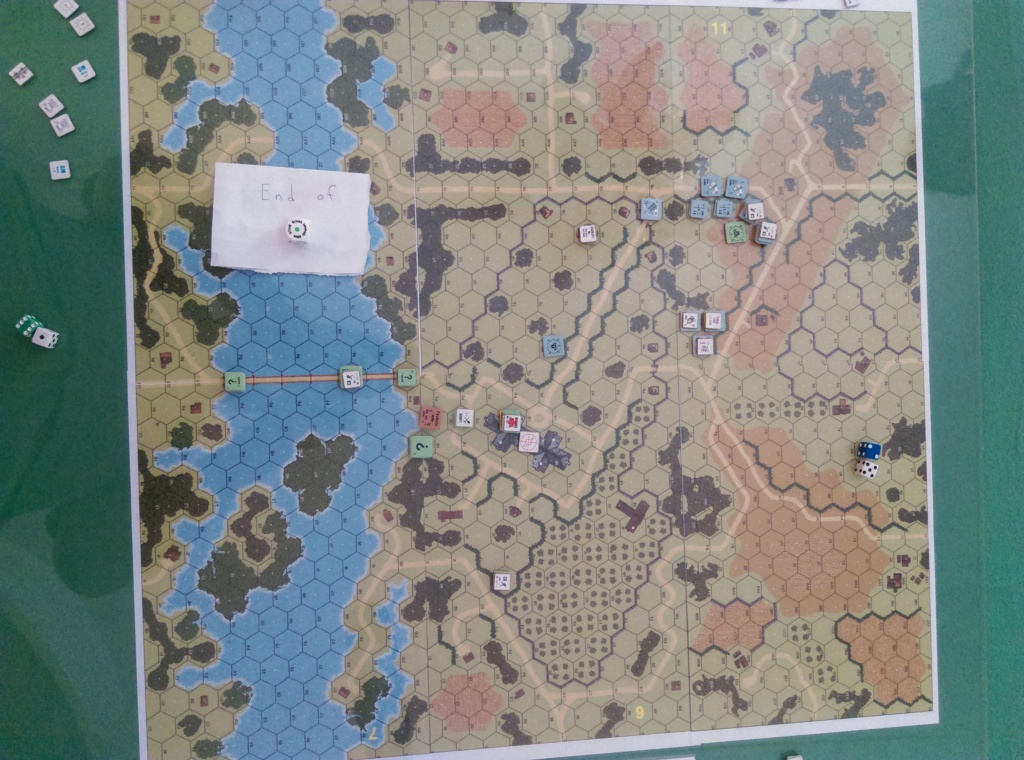 In turn 2, another half-squad recovers the MMG, so Robin fires smoke to the position, and moves aggressively. By chance, a couple of his vehicles stop adjacent to HIP squads, and in My PFPh, they attack with MOL, but both fail to do anything. The ATG on the bridge wrecks one half-track, and with ROF, turns to engage a PzIVE in 6K6, only to malfunction his gun. I manage to entrench in 7Q3, but the squad in the 6O1 trench disrupts, which spoils an otherwise useful link. In the CCPh, one of my 37s passes its 1PAATC (see A19.34) and attacks (with his reduced CCV of 4), managing to immobilize the last half-track. The German infantry are going to have to cross the bridge on foot from now on !!! I have to keep the bridge closed for as long as I can. The Yugoslav SAN finally shows up, and does so big, by Recall (D5.341) stun on a PzIVE. 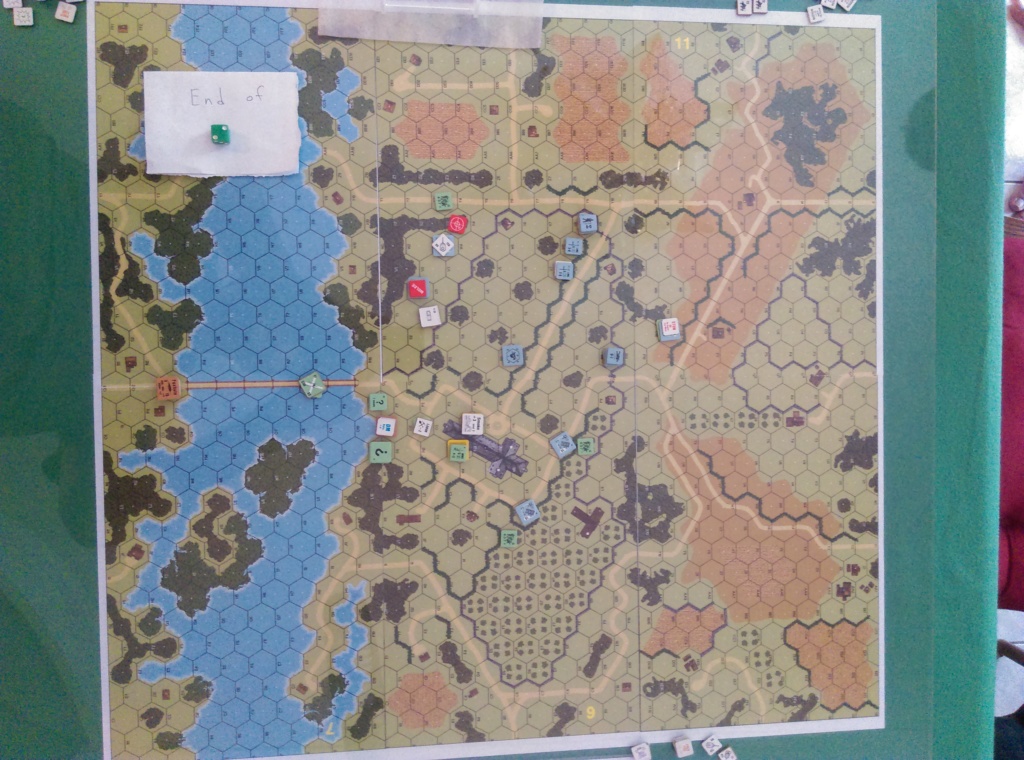 In turn 3, my units around the bridge continue to take fire, but for the most part are able to withstand it. The ATG in 6N0 fires frantically at the PzIVE in 6P3, but makes no impression on it. A Pz IVE Bogs (D8.2) as a result of entering a hex adjacent to a Marsh (D16.43) in hex 6R0. They then malfunction and disable their MA, which means that only 2 Mobile AFVs remain to satisfy the VCs. 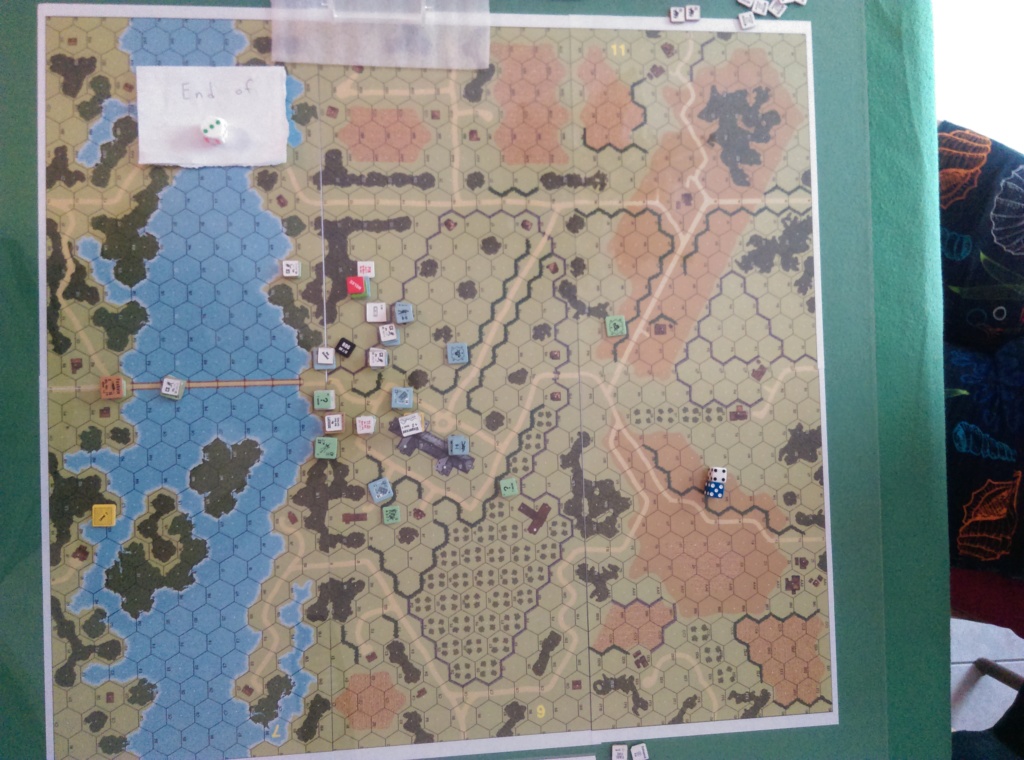 In turn 4, the Germans press point blank to the western shoulder of the bridge, with my squad in 6P0 passing a number of tough MCs. The ATG in 6N0 fires and fires at 6P3, but makes no impression. With no gun-shield or emplacement, I take the Intensive Fire (C5.6) shot purely out of survival, but disable the gun with a 12 DR. My other gun team fare no better, as they break and Low Crawl (A10.52) away to Q3. MOL attacks on 6P3 result in the Chateau (6N4 building) catching fire..... 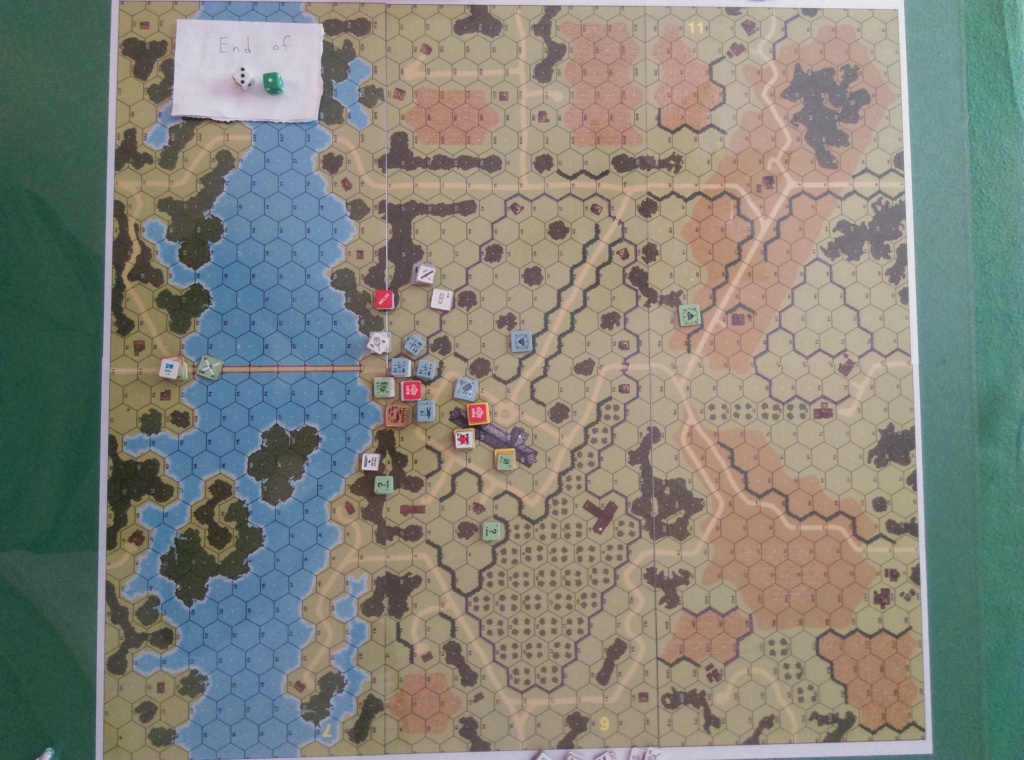 In turn 5, the Germans continue to blast 6P0, but my squad of iron holds on,  finds a MOL, and manages to eliminate an adjacent PzIVE for my first MOL kill in 7 attempts. The rest of the German infantry press on the bridge, and one of my stragglers kills a German squad and creates a leader in CC. The Chateau blaze spreads..... 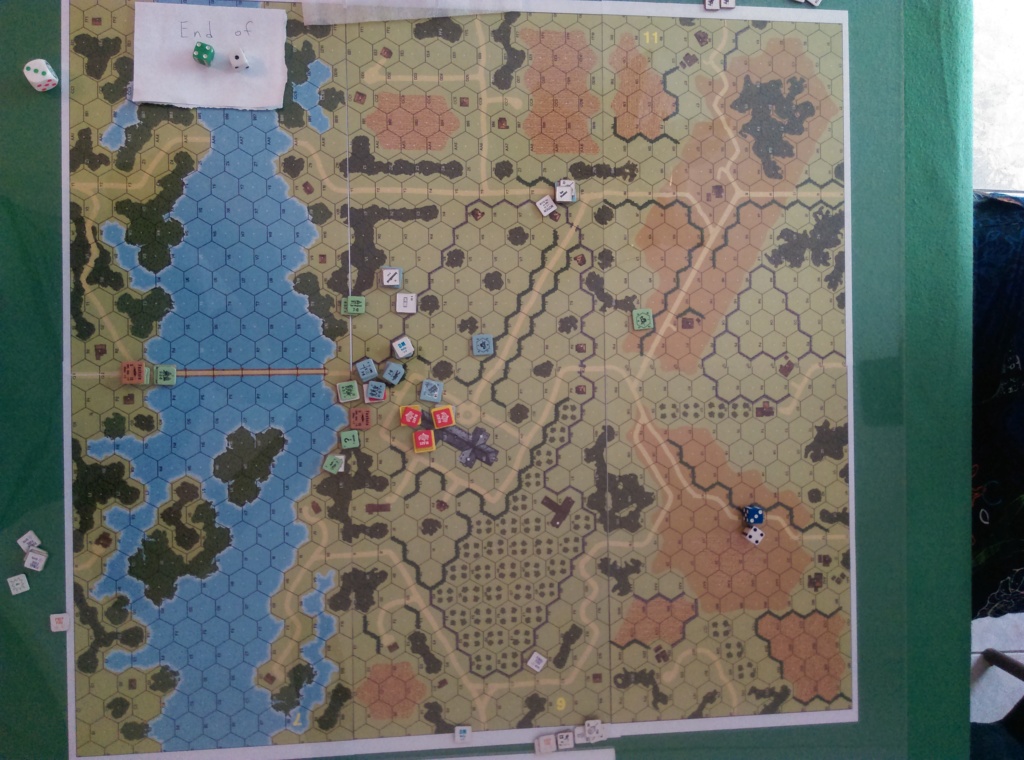 In turn 6, my super squad in 6P0 is finally overcome, but we manage to hold the Germans on board 6. An abortive attempt to close assault the 6P3 tank results in a 227 going Berserk (A15.4) and killing himself in the charge. However, it gives others a chance to get adjacent, but only the wounded (9-2, ELRed to a 9-1) leader and a half-squad pass the 1PAATC (even with the leader removing the A19.34 penalties, I still have a 1PAATC for being (non-elite) Allied Minors (A25.91) to engage the last AFV at CCV4@+0. My Close assault team miss, and the CMG gets a CR result, which sees the leader die of that wound. 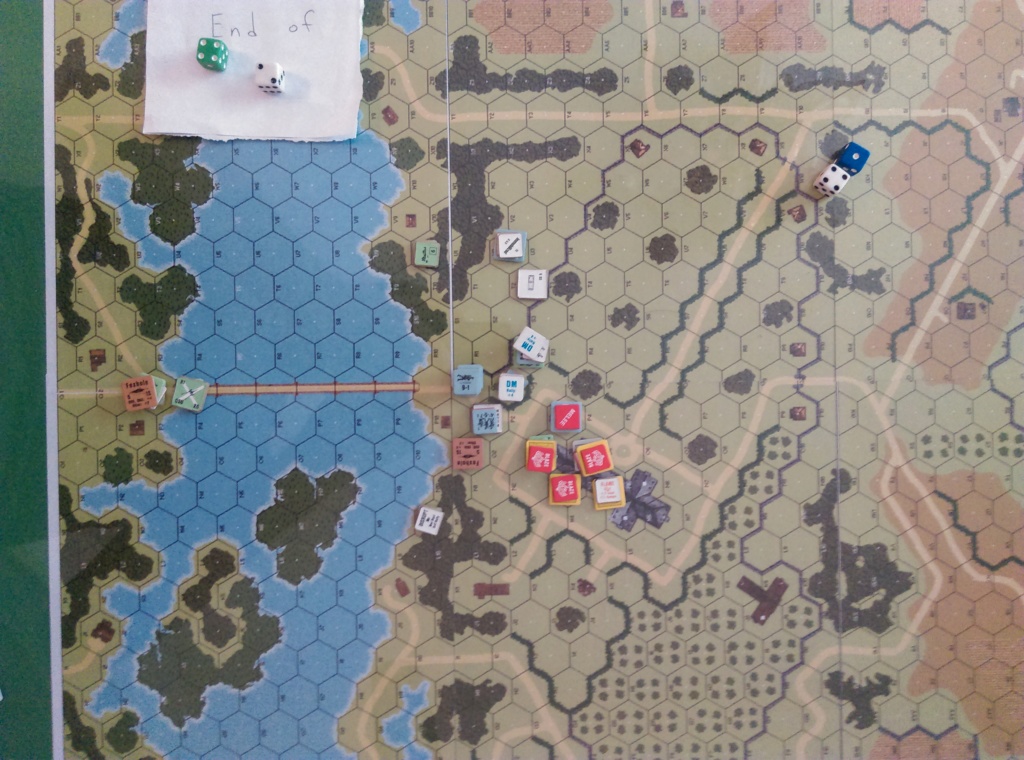 In turn 7, I manage to repair the ATG in 7Q4, and the Germans fail to make any impression on my infantry. A number of Germans squads are broken, and their only good order infantry are all in 7Q10. By the end of the turn, my infantry are surrounding the Germans. Despite there being only 1 vehicle in the game, it looks to me that the German infantry are going to have a much harder time of it getting across the bridge. 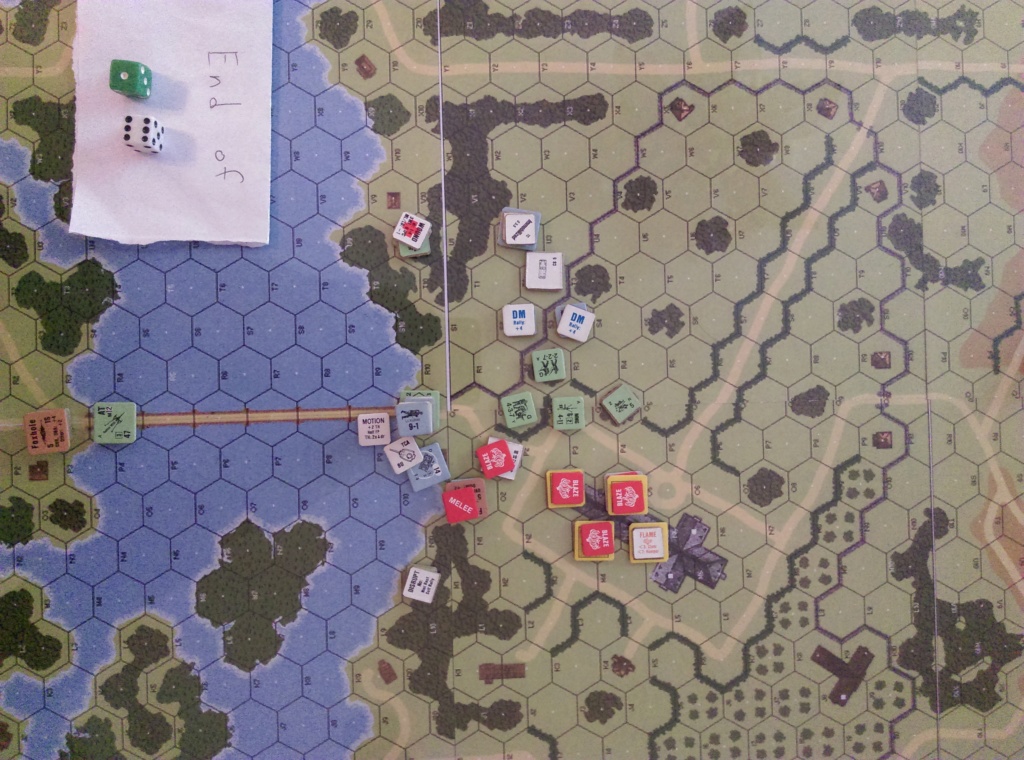 In Turn 8, Robin has to try and blast himself a path of salvation, buy my infantry stand firm. There is nowhere for the Germans to rout, so when the Germans get encircled and broken, the tank has to provide cover to save them from having to rout (which they cannot do). But in my turn 8, none of the German infantry can rally, and when the tank can do nothing to stop my adjacent advancing MMCs, the cream of the German infantry perish in the Rout Phase. And if it weren't impossibly difficult enough, I create another leader, as I kill the last remaining German squad in CC, essentially clinching the game. 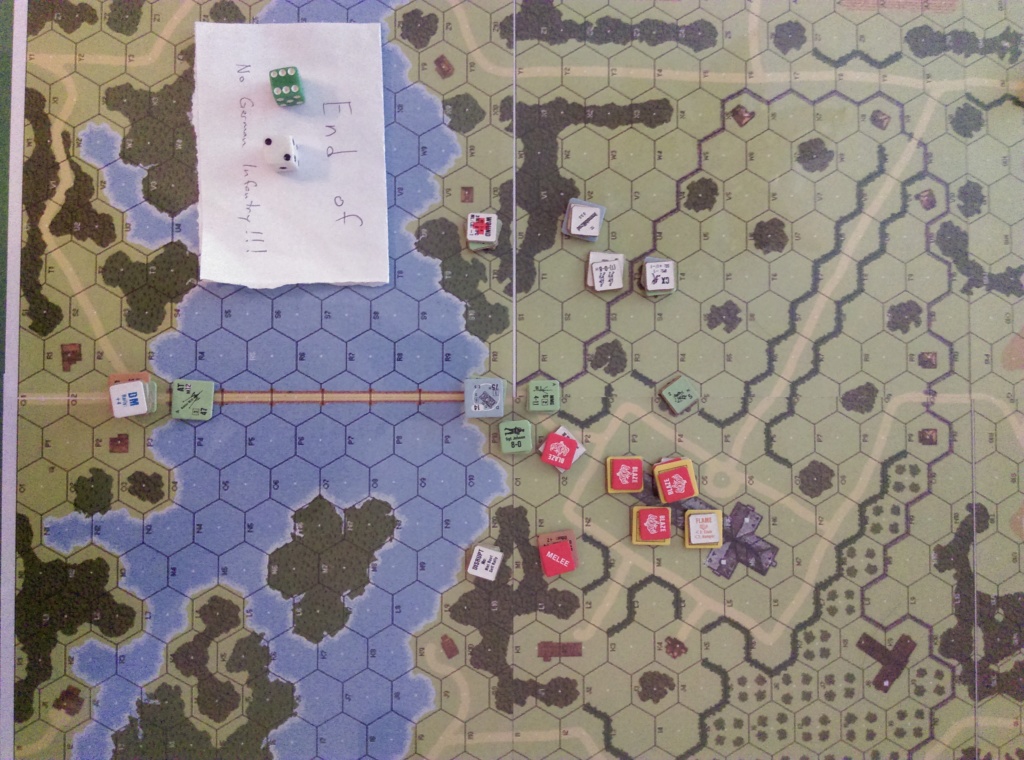 We started playing the game around 12:30, and finished at 4:20, which isn't too bad for an 8 turn game. Robin was aggressive throughout, definitely had his chances, but in the end, enough of my infantry were able to hang on and eventually precipitate a total collapse of the German infantry. A fun scenario to play.