Yesterday, we had a meeting of ASL players in the Ximen district of Taipei. Whilst Kang Yu (Ken) assisted the teaching of Roy and Neo, I played Little Wolf in ASL-137 "Italian Brothers".

I don't currently have Hollow Legions, but the Italians I have from my ASLSK sets are more than adequate to cover the OoB, along with Finnish concealment counters (I do have Hakkaa Paalle). I also printed out a VASL map, so that all the buildings would appear as stone (with no printed stairwells), and the grain would appear as Vineyards. 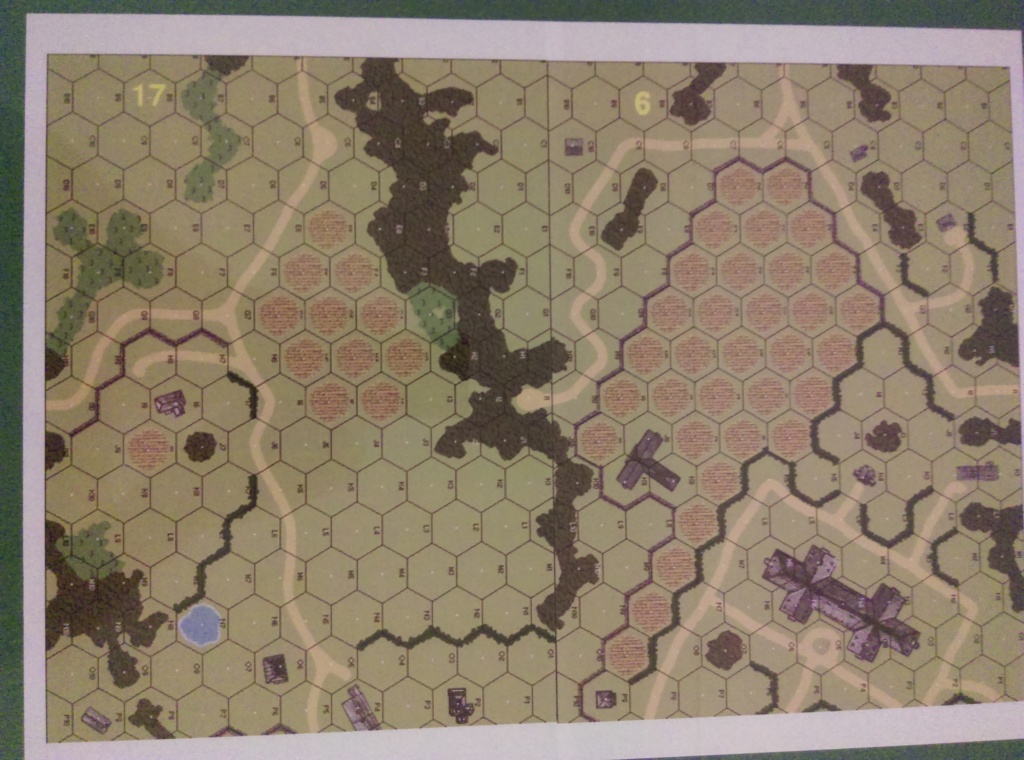 This scenario depicts a meeting engagement in the Spanish Civil War. The Republicans instantly win by controlling the large chateau building (6N4), or either side wins by controlling 3 of 4 buildings (6K1, 6K4, 6J8, 17P2), and if neither side can manage to control 3 of the 4 buildings, the game is decided on CVPs. The Republicans get 14 (437) squads (that are not green, and do not disrupt), 4 leaders, and 5 SWs. The Nationalist get 18 squads (6x 347, 12x 346), 3 leaders, 6 SW, and 3 L3 tankettes. Little Wolf chose to take Nationalist (Italians), so I set up the Republicans (Allied Minor). My feeling and advice to Little Wolf was that it would not be easy for either side to take 3 of the VC buildings, so the game may well come down to CVPs. A wrecked L3 tankette is worth 5 CVPs, so he should be careful withe the L3s, and avoid enemy MGs when possible to do so. 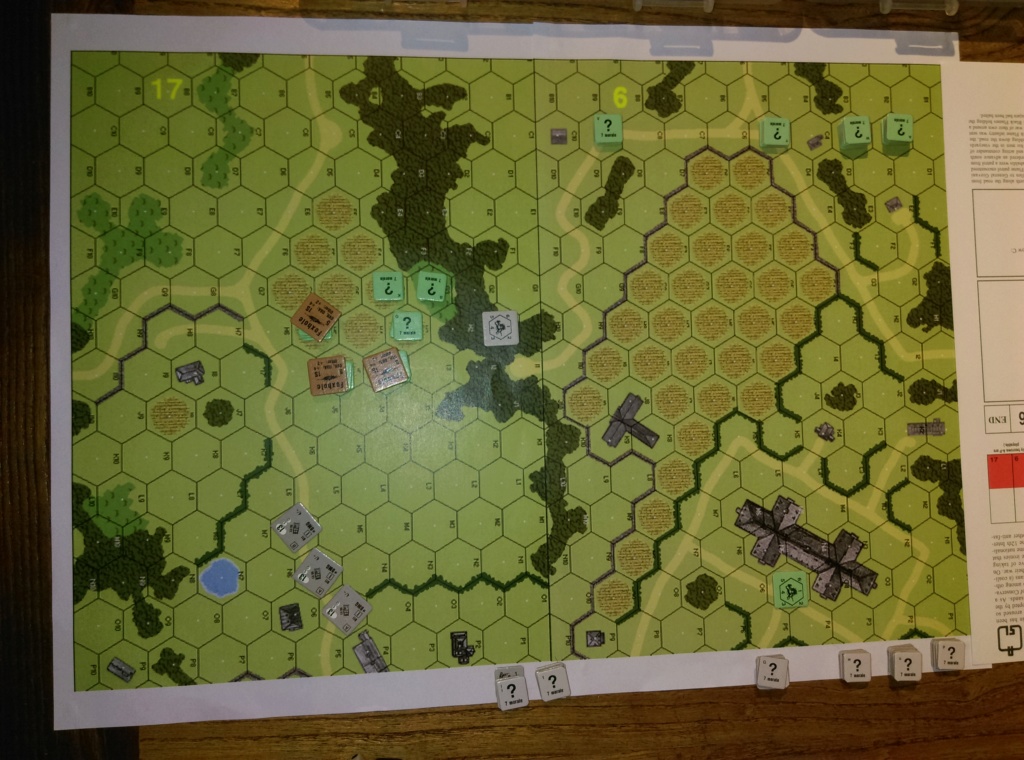 In turn 1, my MGs on board 17 engage the L3s, but without any success. Meanwhile, my board 6 infantry are able to grab 6K1 and 6 K4. Little Wolf successfully withdraws the AFVs from board 17, heavily occupies the chateau, and grabs 17P2 and 6J8. 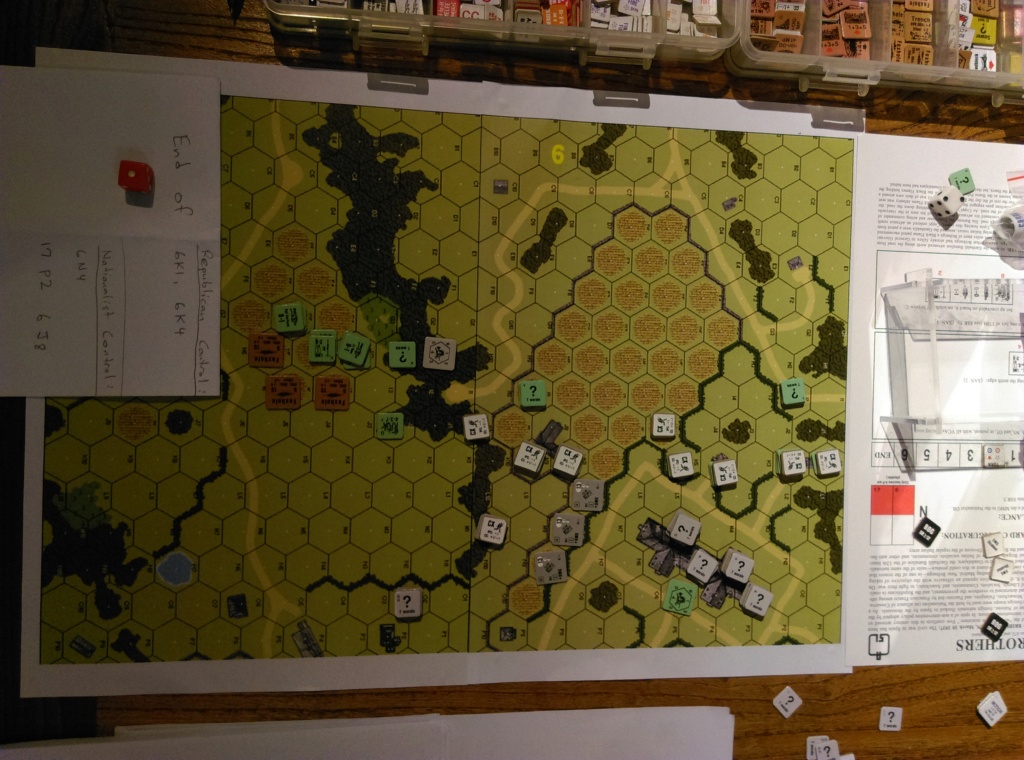 In order to reach 6J8 in their first turn, the Italian squads Double Time, and are currently under CX. I hope to take advantage in the CCPh, but am largely unable to reach them. The CX is removed in the Nationalist turn, so the opportunity is missed. 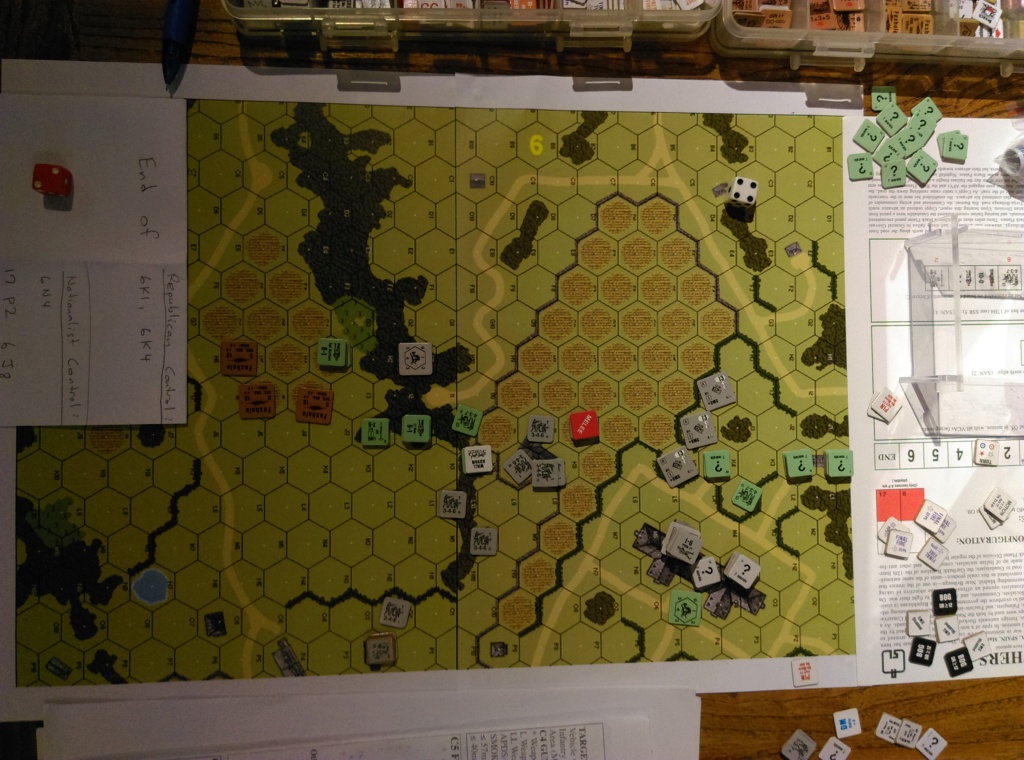 In turn 3, and pretty much for the rest of the game, we find that our IFT DRs are both high, but our MC DRs are quite low, resulting in very few broken squads, and subsequently a great many CCs, especially in the 6J8 building. The Republicans get into CC with an L3, but fail to make any impression (the 10-3 you see in 6I4 is actually the 10-0 Commissar leader). The Nationalists have now established 2 'deathstars' (MMG/347, LMG/347, '-1' leader) in the chateau, and this pretty much makes board 6 dangerous ground for my Republicans, who have to just try and hang on to 6K1 and 6K4. 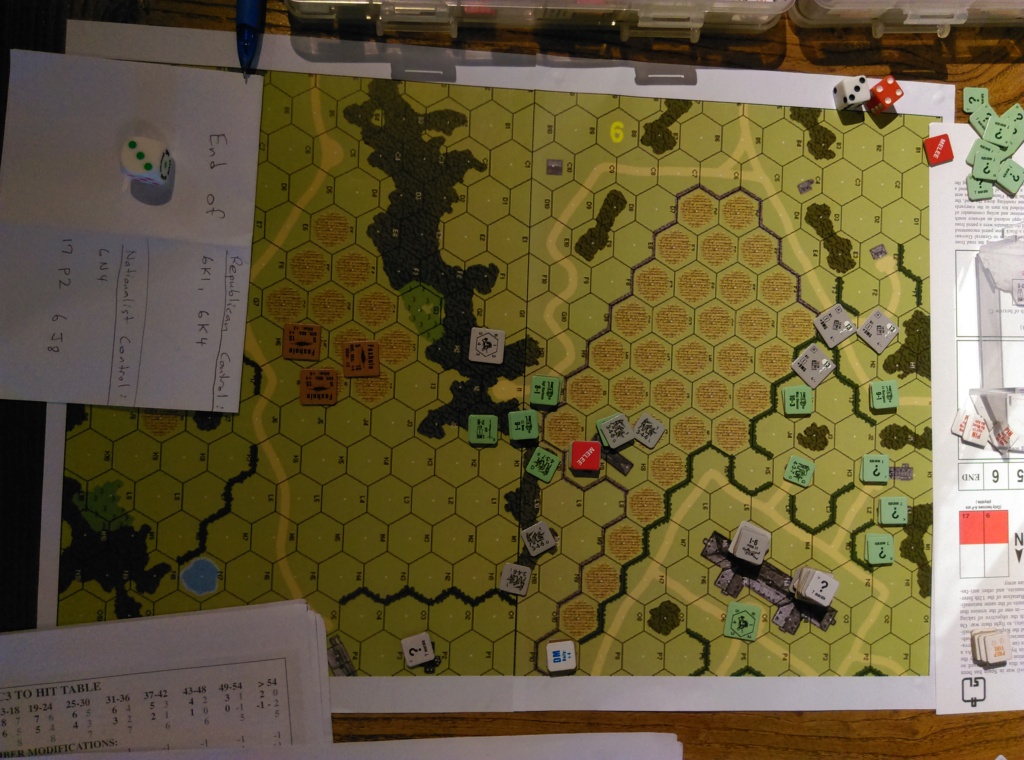 Turn 4 is quite a busy turn. My MGs (after a number of attempts) wreck a L3, the Nationalists take 6K4, and there is a brutal, no-survivors CC in 6K9 which sees 4.5 squads, and 1 leader perish. One of the L3s unluckily Bogs in the Vineyard, too. The Nationalist currently control 3 buildings, but with 6J8 being empty of units, it will be little problem for the Republicans to take control of it. The Nationalists are 1 point ahead on CVPs 17-16. 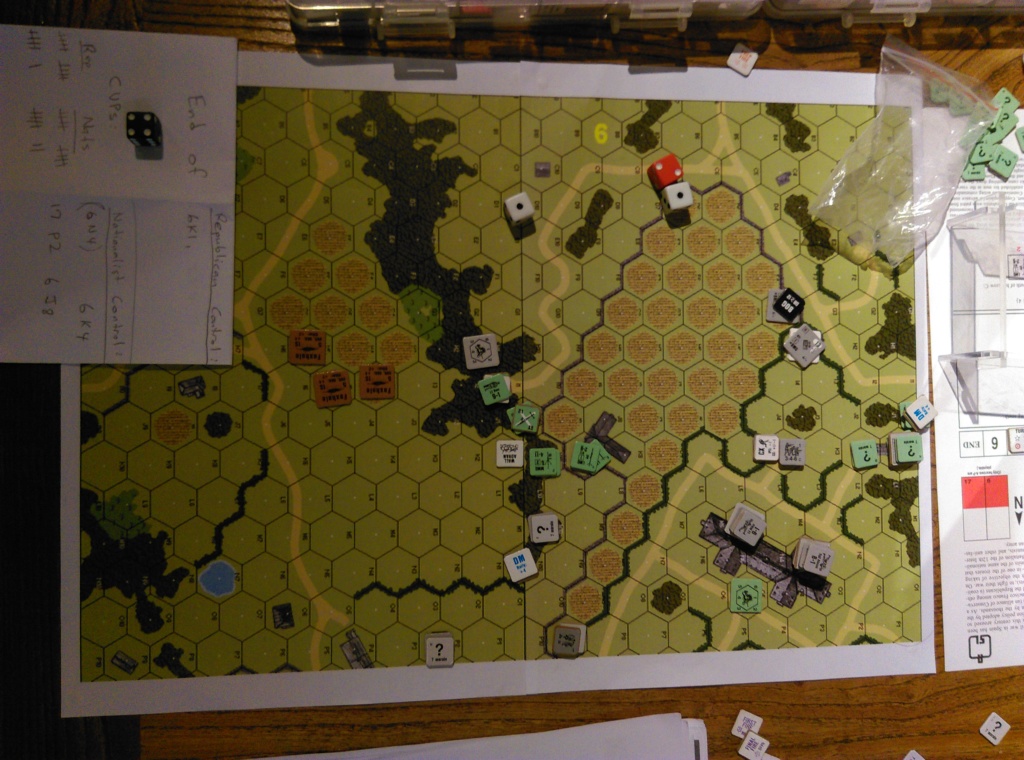 Turn 5 is something of a stalemate in terms of moving, but its nonetheless a good one for the Republicans, and they retake 6J8, and gain 2 CVPs to take the lead 18-17. The unbogging attempt goes badly for the Nationalists, and now one L3 is immobilized, although it least it enjoys some Hull Down (D4.2) protection from the wall. 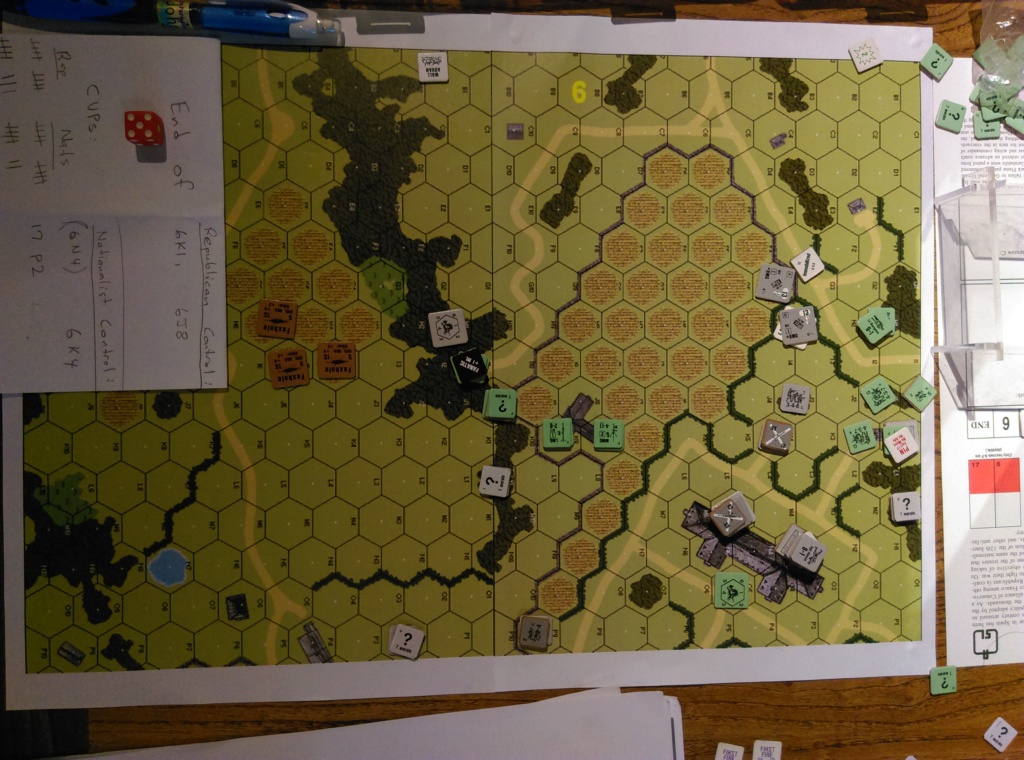 Turn 6 goes somewhat similarly to turn 5, as both sides have really run out of offensive steam. My Republicans pick up another 2 CVPs, which sees the Republicans edging the Nationalists 20-17. 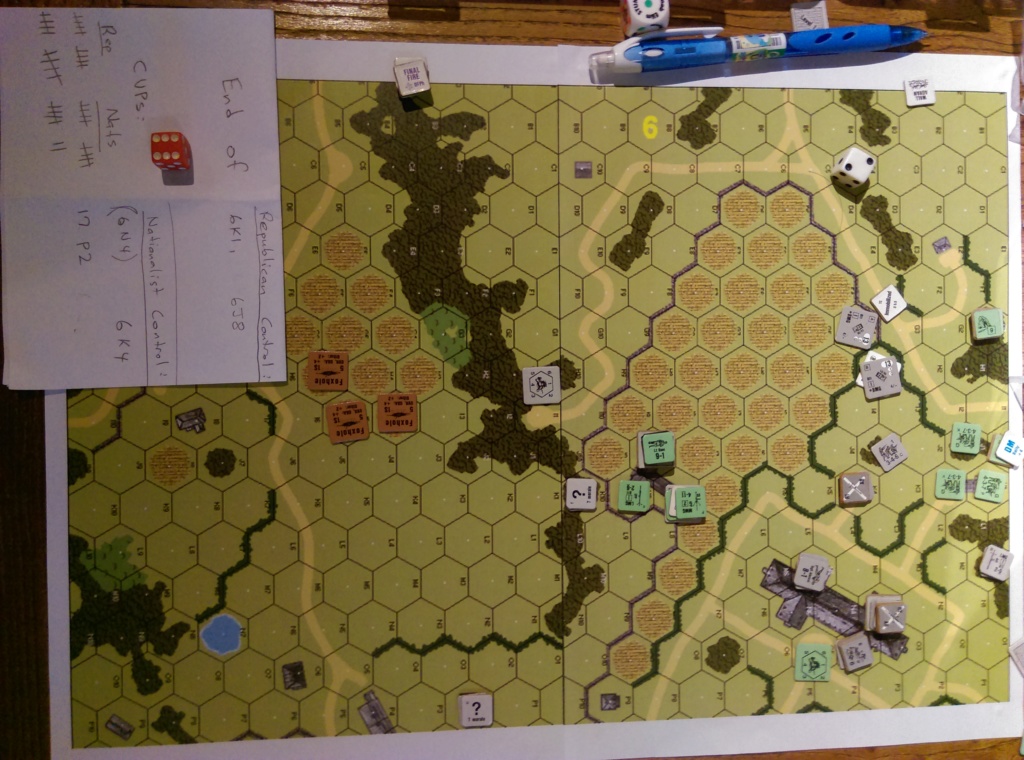 It was a good scenario, which remained close throughout the game, and although I hadn't planned it, Little Wolf handled the (radioless) L3 tankettes rather well.