Last Saturday, Roy came over to my home to better learn AFV use in ASL. We played two scenarios, ASL-162 "Armored Car Savikurki" and J-192 "Taking Some Flak". In both scenarios, I printed VASL maps that incorporated the terrain changes, with actual boards parallel for doing LOS.

In ASL-162 "Armored Car Savikurki", 4 648 squads, 1 leader, and 1 SW supported by a lone armored car need to cross half of board 42 and exit 5 VPs of infantry. The Russians defend with 7 squads, 2 leaders, and 2 SWs. I played the defending Russians, whilst Roy played the attacking Fins.

For the first couple of turns, Roy advanced steadily, whilst my Russians gave ground for time. On turn 3, the armored car got a hot ROF tear, and along with a successful CC attack, the Fins eliminated 2.5 Russian squads, for the loss of half a squad. The Fins now had the upper hand, and it looked like the Russians would have their work cut out blocking their exit. But then the tables were quickly turned during turn 4, when the armored car was eliminated by the HMG, and the Russians were able to stabilize the line. With 2.5 turns left, Roy was forced to up the tempo, but his squads could seldom pass MCs nor rally, and I was able to clinch the game in the Russian turn 6 MPh. A good game nonetheless, with both sides getting to enjoy the upper hand, and Roy getting to see his armored car make a statement.... 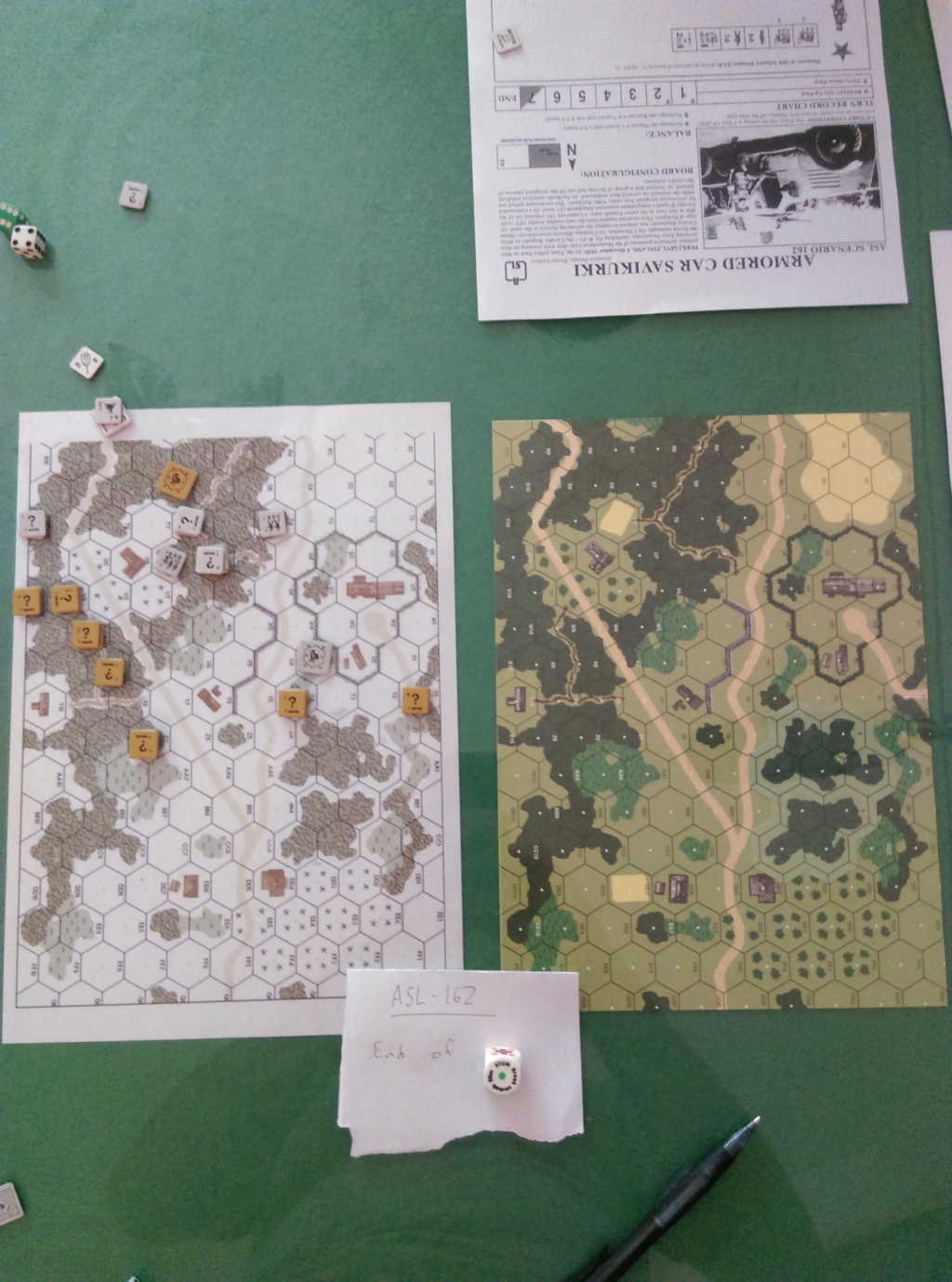 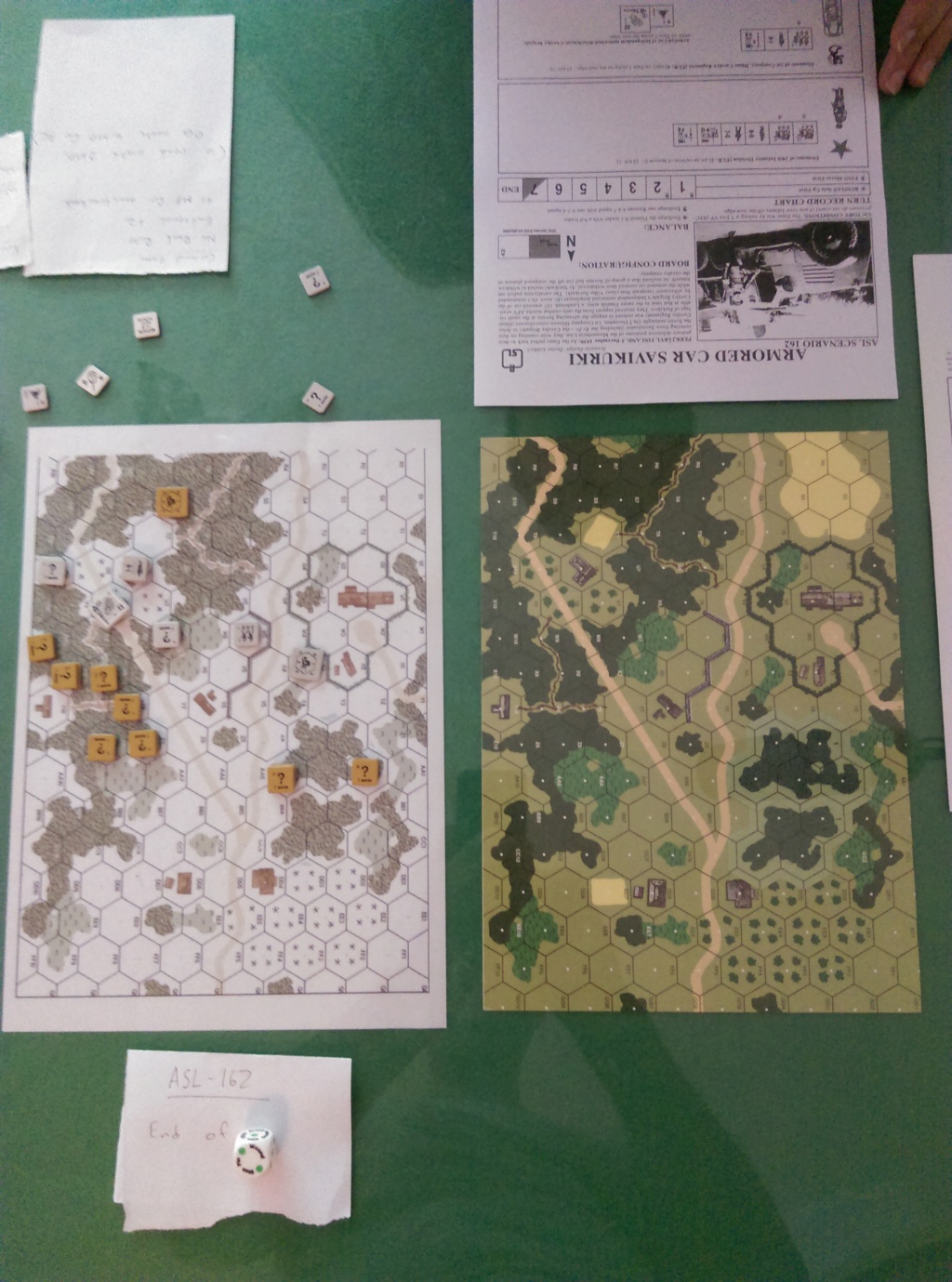 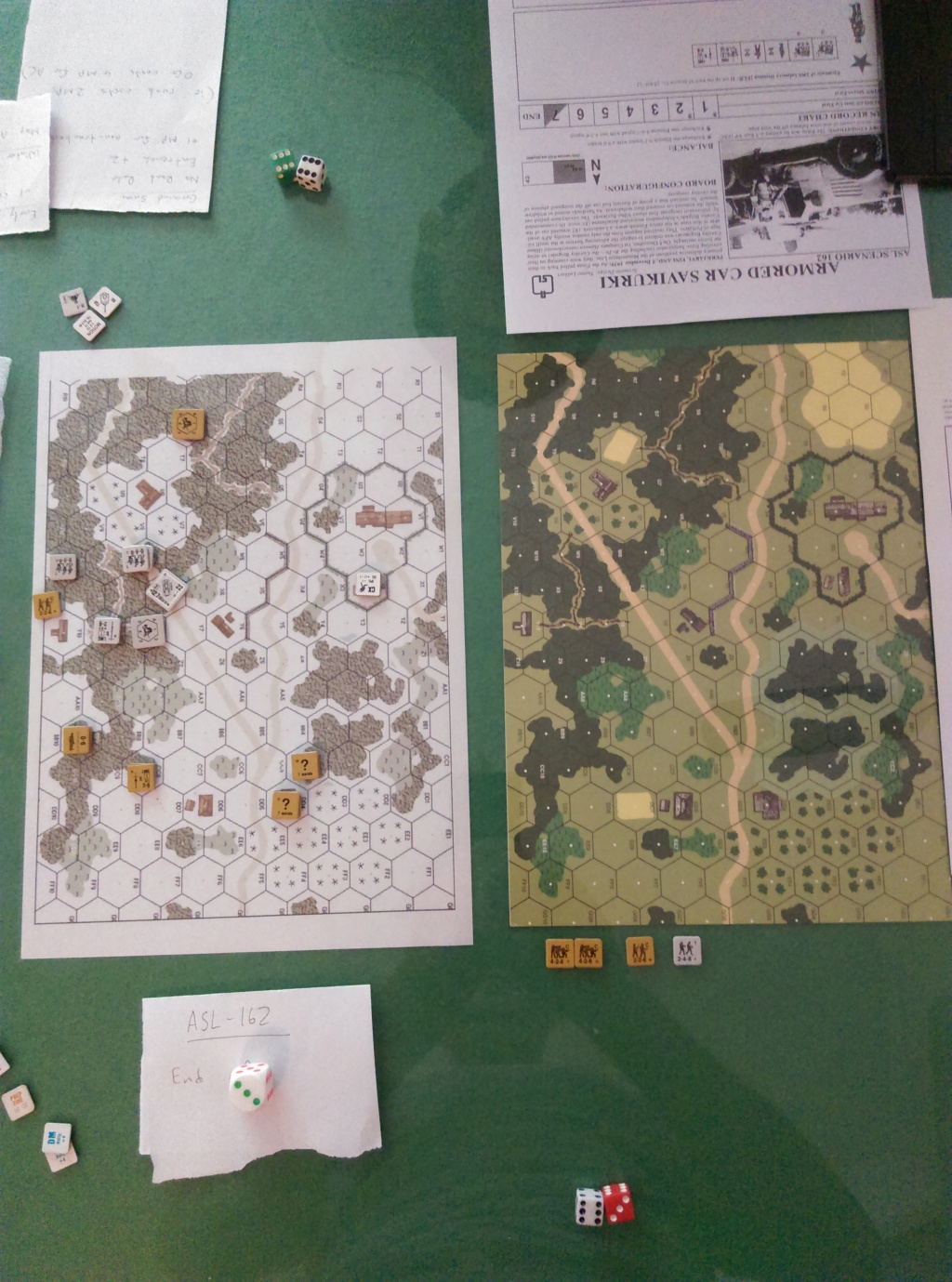 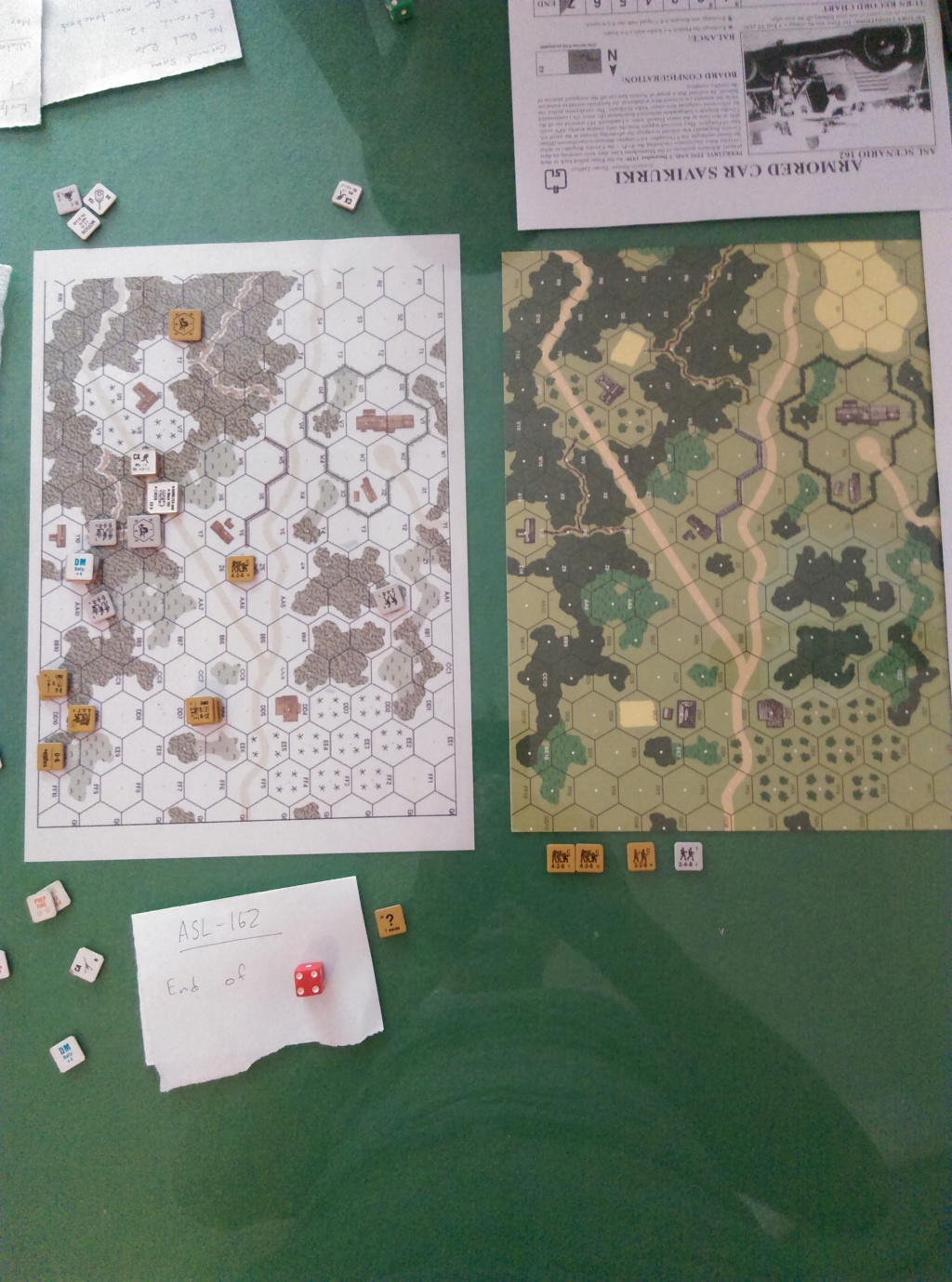 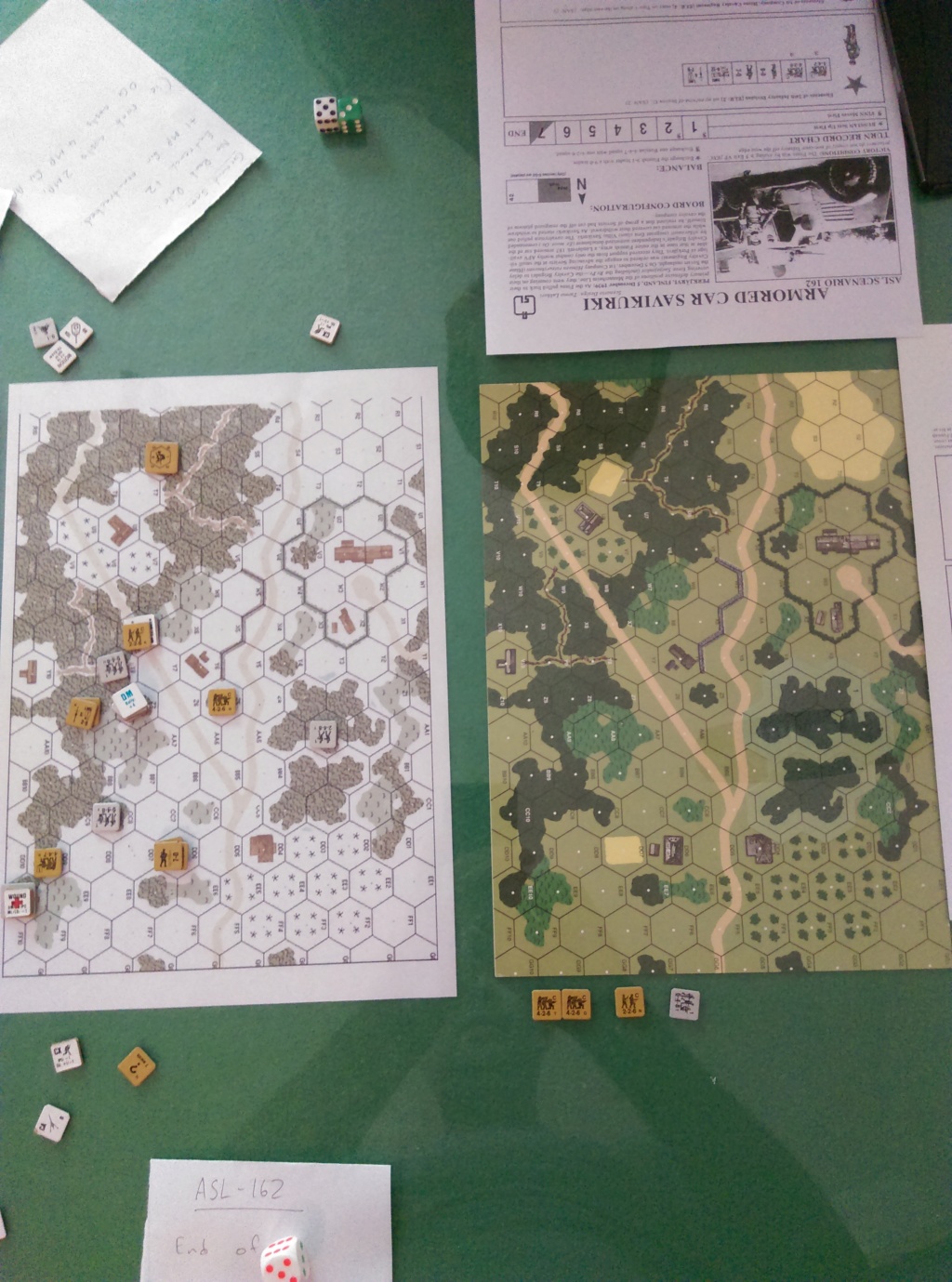 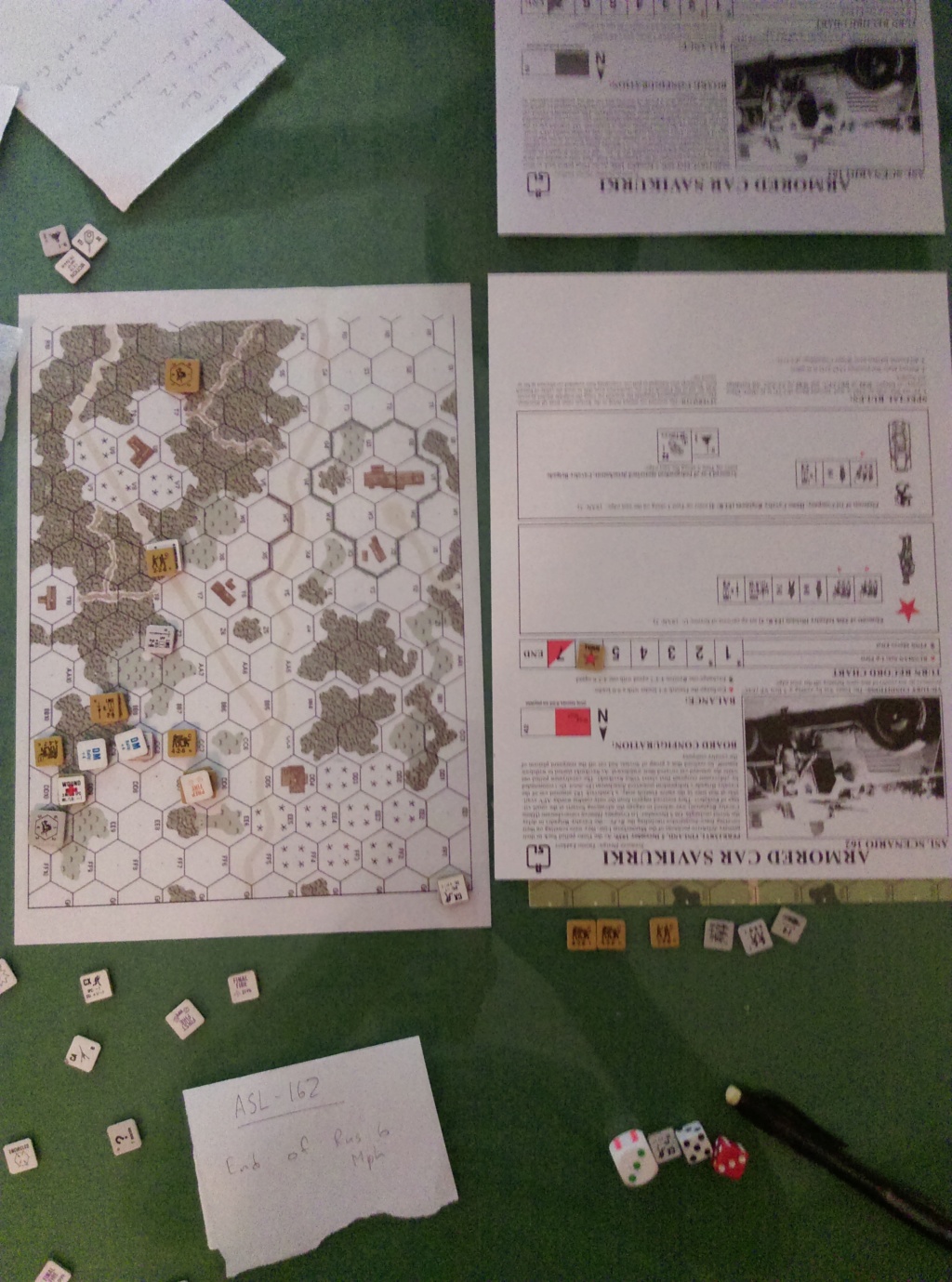 In J-192 "Taking Some Flak", 7.5 (8 with German balance in effect) SS squads, 2 leader, 4 SWs, and a Flak wagon try to hold up against 12 Fin squads, 3 leaders, 3 SWs, and a crewed 81mm Mtr. To win, the Fins must either control the road hexes from 37B5 to 37E5 by the end of turn 3, or earn 5 more VPs than the (SS) Germans. Both sides get CVPs normally (Exc: prisoners are not doubled), and Fins get Exit VPs for units exiting from 37N4 to 37N6. The scenario is 5.5 turns long, and features board 67, which I really like. This time, I played the attacking Fins, whilst Roy defended with the (SS) Germans. German balance (add a halfsquad) was in effect.

Roy defended the wooded area around the B5-E5 road heavily, so a 3 turn quick knockout was not looking very realistic. My flanking groupe entered on the west edge during turn 1, with a decent MG nest advancing along row N. Unfortunately, the 50mm mortar tore up my MG nest, and when one of the squads went berserk and charged to its own death, I would have to rely on winning the game with CVPs, as exiting was looking unlikely now. The lead ebbed and flowed, but this time Roy's squads were a bit more resilient, giving as good as they got, and I felt that it would come down to whether or not I could eliminate the flak wagon. Roy sensed this too, and with a bit of infantry smoke, was able to barely extricate the vehicle (I had 3 TK attempts failing by 1, and the inherent crew passed all 3 MC). In the last turn, I was forced to run in OG in hope for a deciding AFPh shot on the wagon, but only succeeded in digging myself a deeper hole, as the flak wagon KIAed 1 squad and broke another in the last Fin MPh. The final score was Fins 12, German (SS) 14. Roy mentioned that he felt that the flak wagon was a very deadly vehicle; it is when you're shooting with it, but I reminded him that it doesn't (usually) take fire so well.... 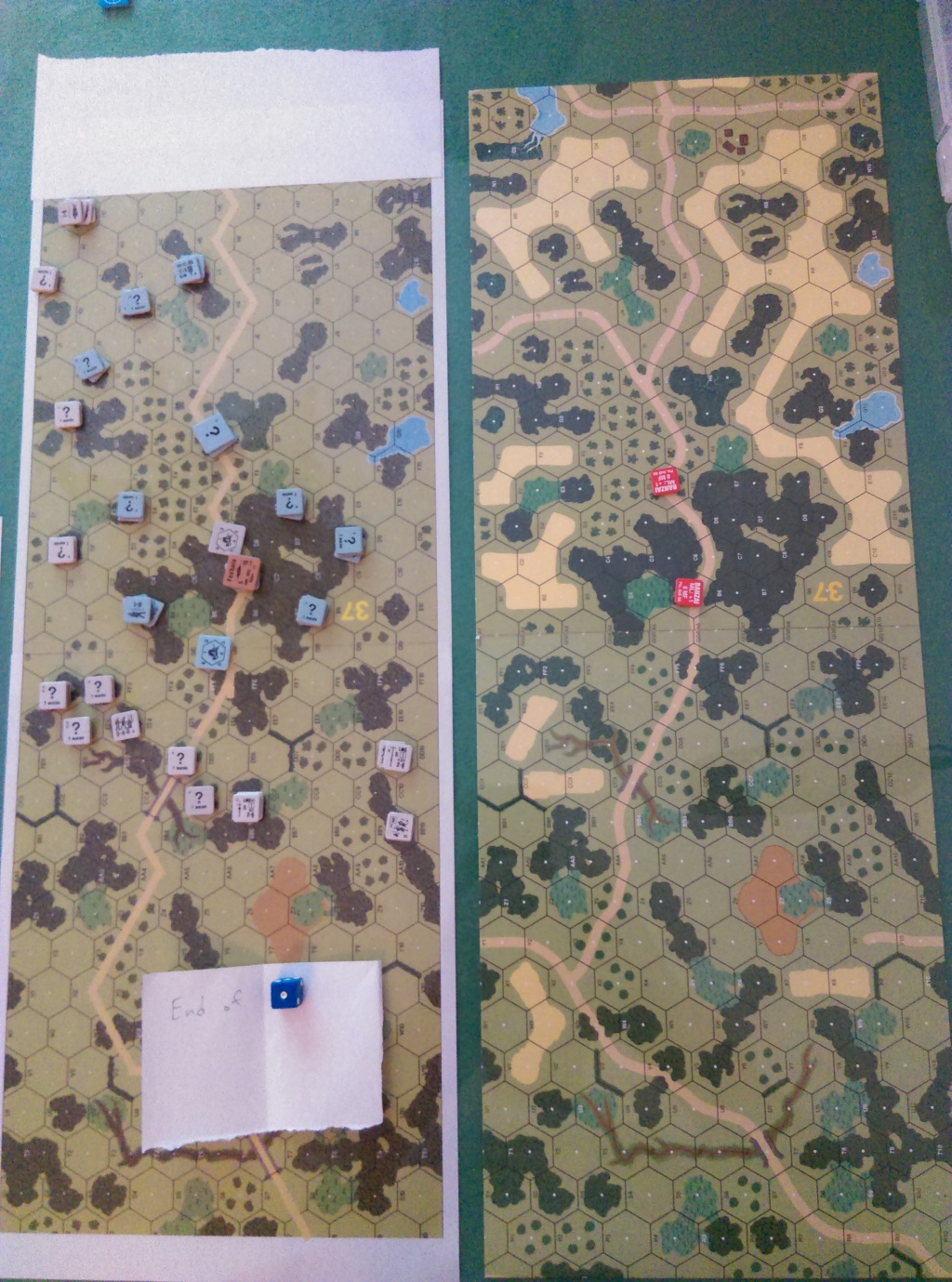 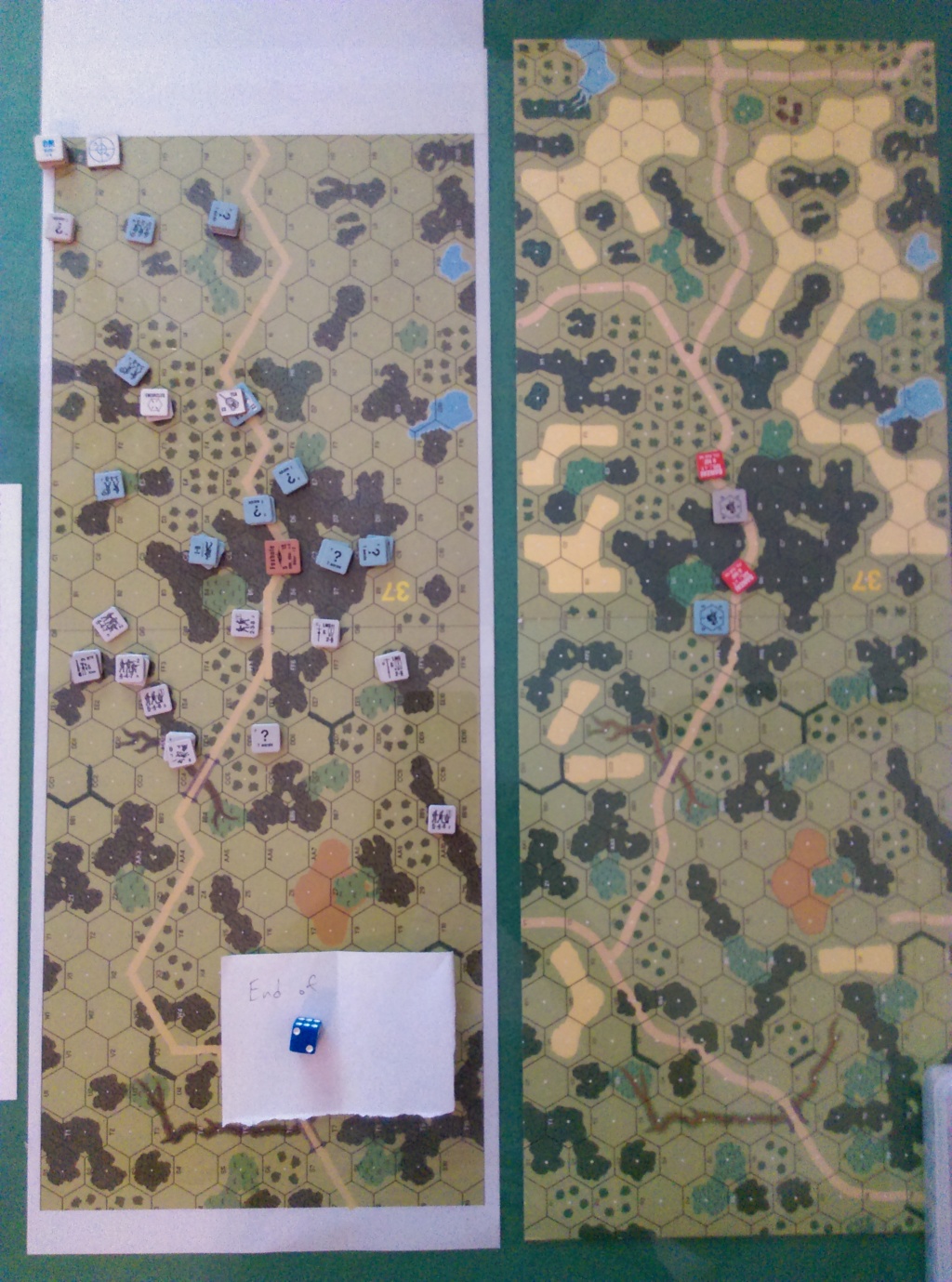 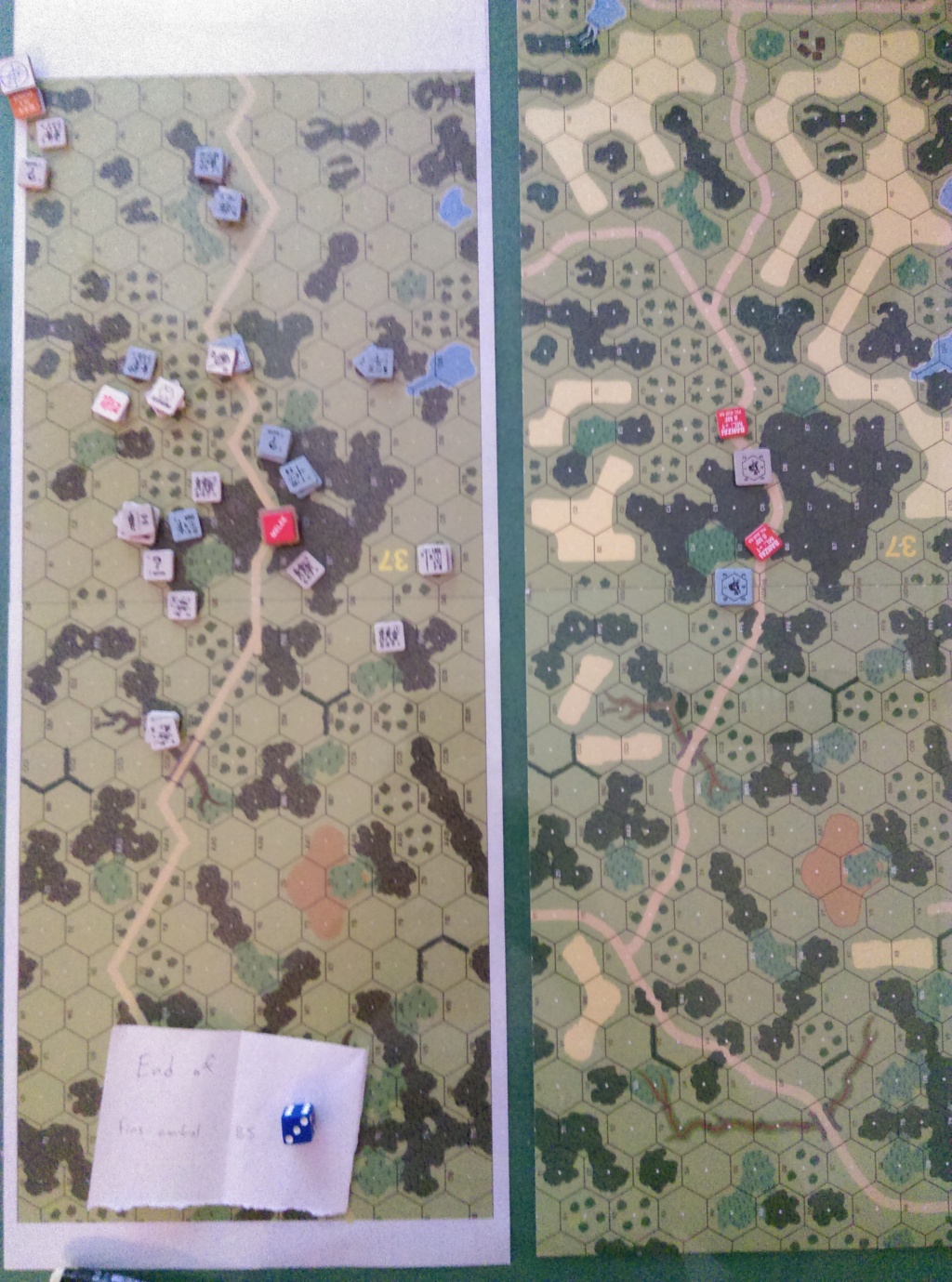 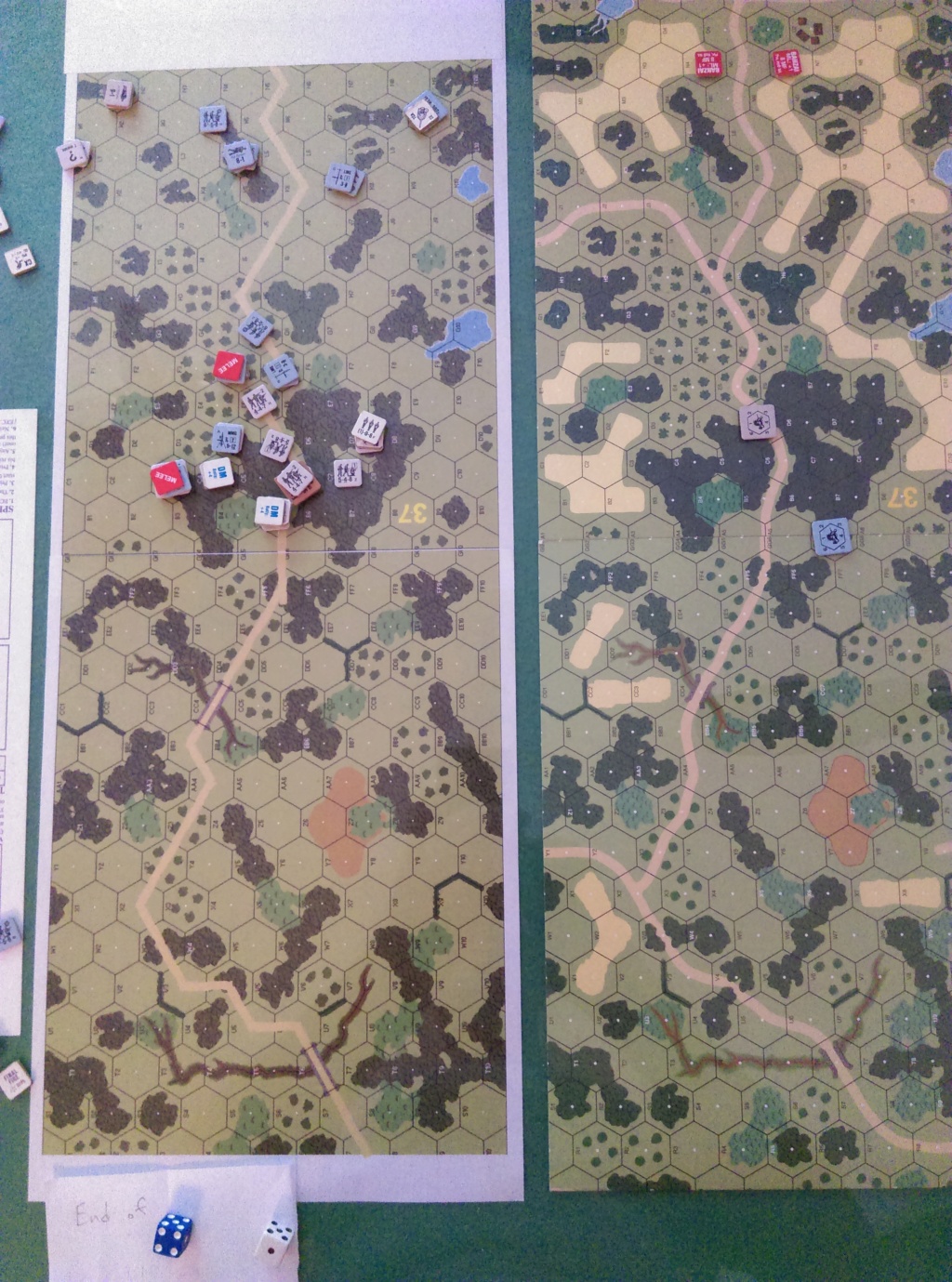 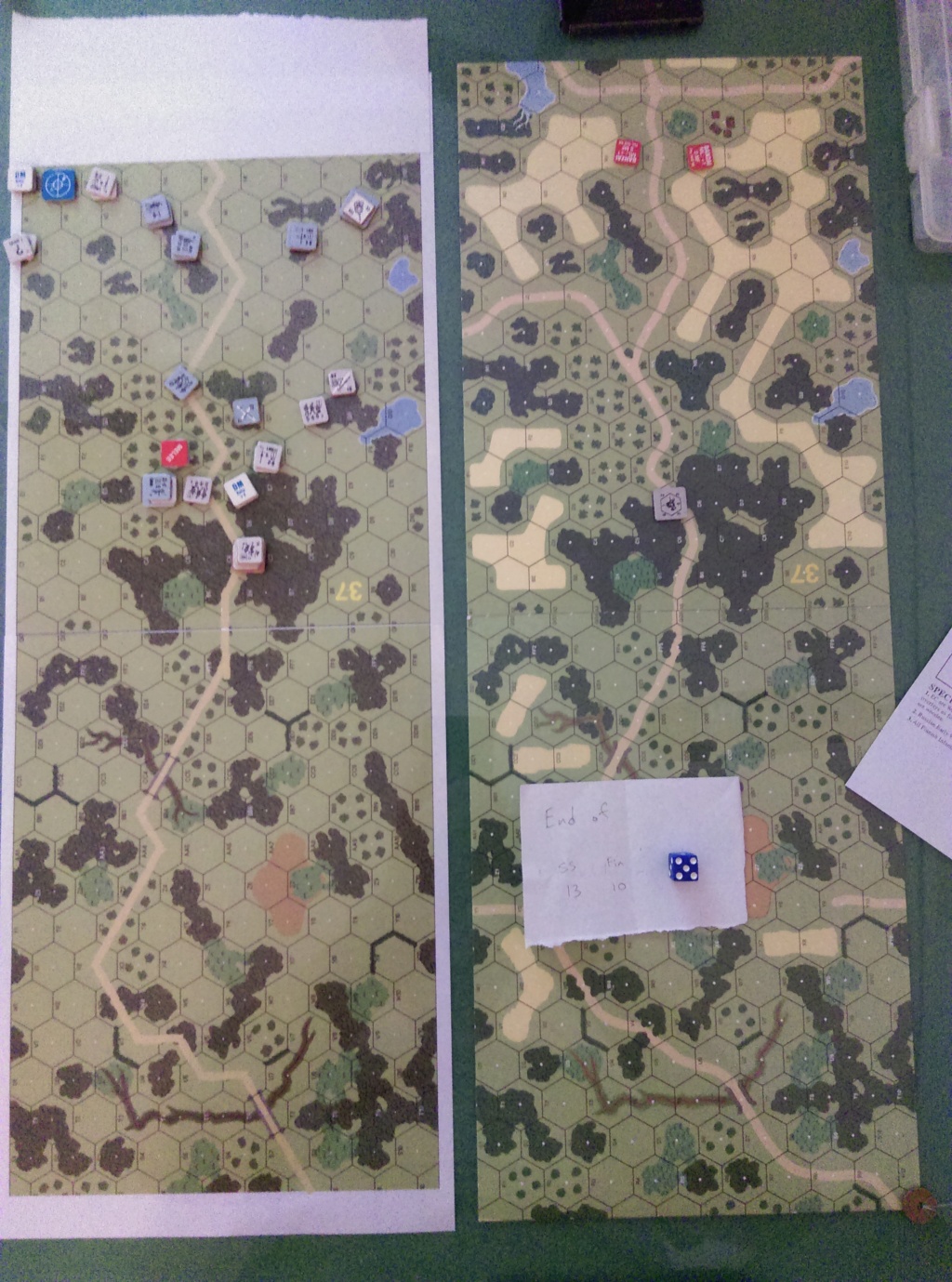 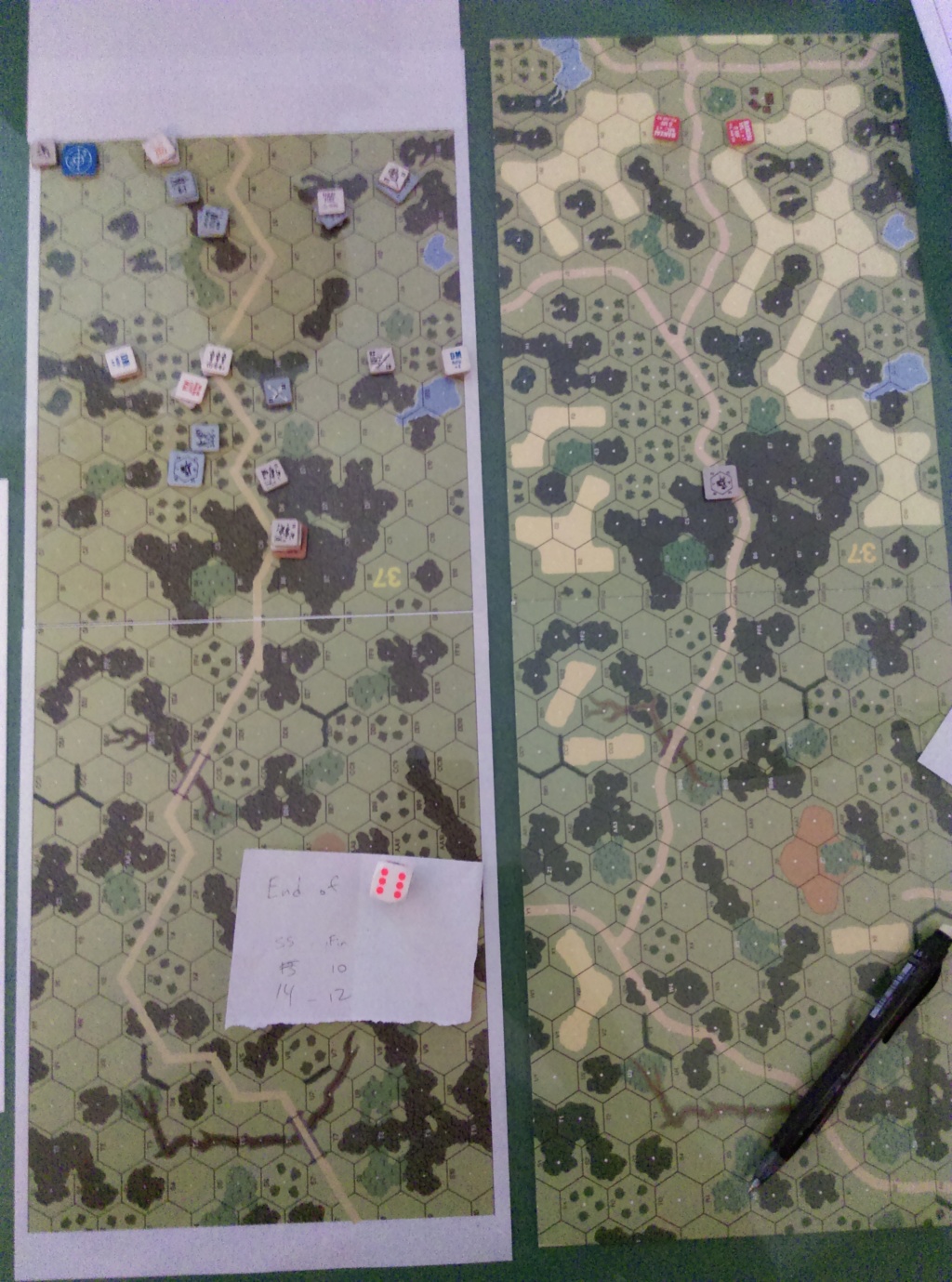 A good afternoon of AFV teaching !!!!