Last month (9/29), we had an ASL meeting in Taipei (I am a  bit late reporting this AAR !!!). I wanted to continue introducing vehicles to Little Wolf, so the scenario I chose to play was ASL-189 "Devil's Hill". I played the defending Germans, whilst Little Wolf played the attacking Americans. We had the American balance in effect (which demotes the starting German 9-1 leader to an 8-0 leader).

To win the scenario, the Americans need to control the 3 (level 3) hexes that contain the at-start German foxholes. The Germans have 3, 3 squad capacity foxholes, which must set up at level 3. It's hard to visualize the Germans wanting to have 3 squads entrenched in 1 hex, but the high foxhole capacity might help out the Americans at some stage. The Americans attack with 10 747 squads, 3 leaders, and 4 SWs. The Germans initially defend with 3 447 squads, 1 leader, 2 SWs, and a crewed 75* Inf gun.  The Germans receive reinforcements on turns 3 and 4, which in total add 6 467 squads, 2 leaders, 2 SWs, and a 8 FP Flak truck. Attack followed by counterattack; always a fun style of scenario to be playing, since BOTH sides potentially get to attack and defend.


Little Wolf's initial attack surprised me a little. He deployed heavily (which largely reduces the American smoke, Assault Fire, and Close Combat ability), and approached the hill cautiously, instead of trying to take advantage of his (current) superiority of numbers. Nonetheless, by the end of turn 4, the Americans had cleared out the P5 and Q6 foxholes, and were in position to assault the final K5 foxhole. 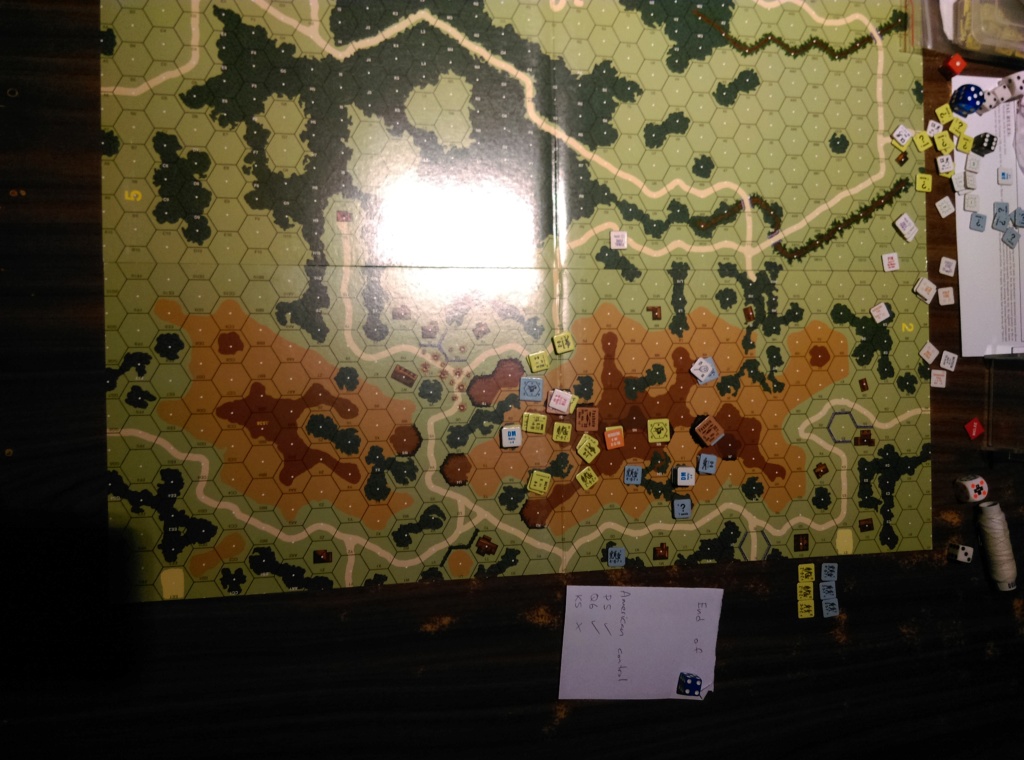 During turn 5, the Americans push along the hill, and manage to immobilize the flak truck. The 75* Inf gun initially causes some trouble for the Americans, but they are able to quickly silence it. 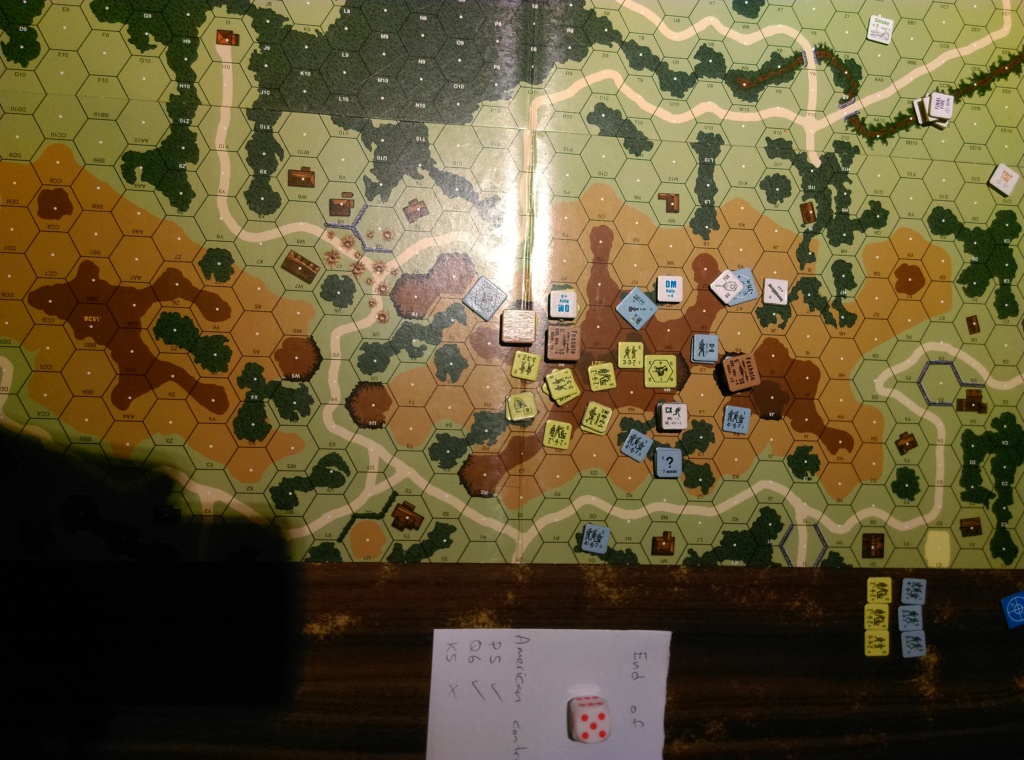 In turn 6, the flak truck explodes into flames, the German HMG malfunctions, and the MMG team breaks, meaning that I am defending the final objective with a SW-less half-squad !!! However, by the end of the penultimate turn, the Germans have formed a 'wall of flesh' with MMCs blocking the way to K5. 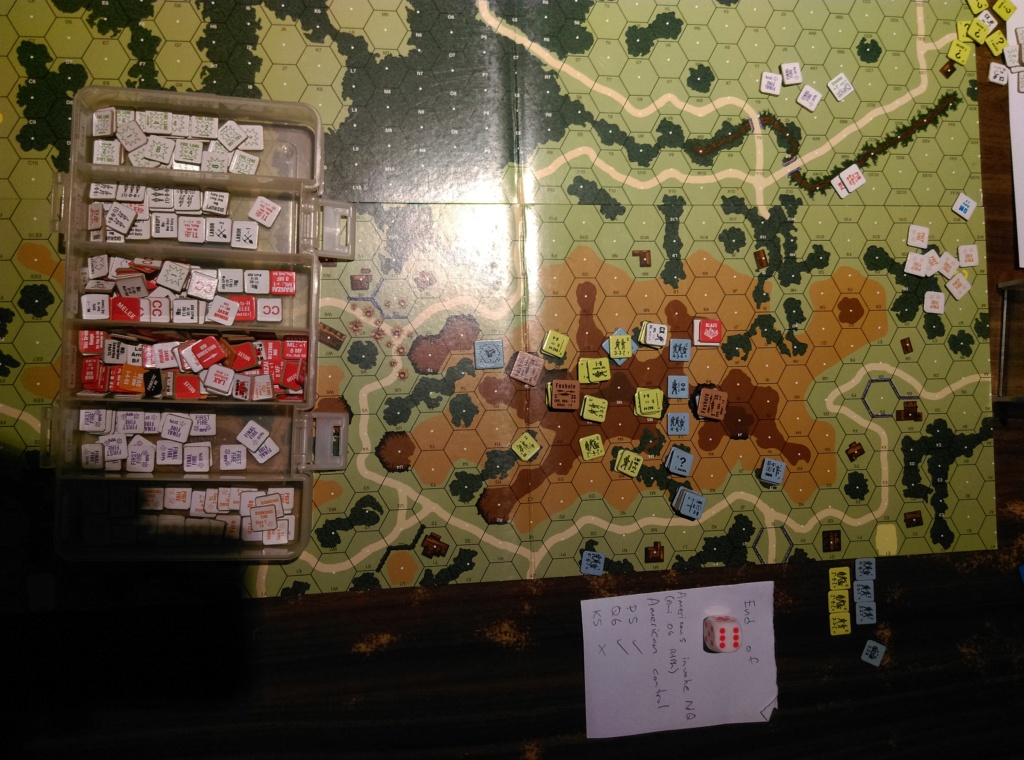 In the last American turn, the Germans fail to repair the HMG, and the American 9-2 and his 2 MMGs fails to break the 237 (with the malfunctioned HMG) in K5. However, other fire manages to disrupt the 436, so there is a path and workable mathematical possibility for the Americans to win. However, on the SFF shot, the Germans manage to pin the only MMC capable of advancing into K5, which clinches a German victory in the final American turn. 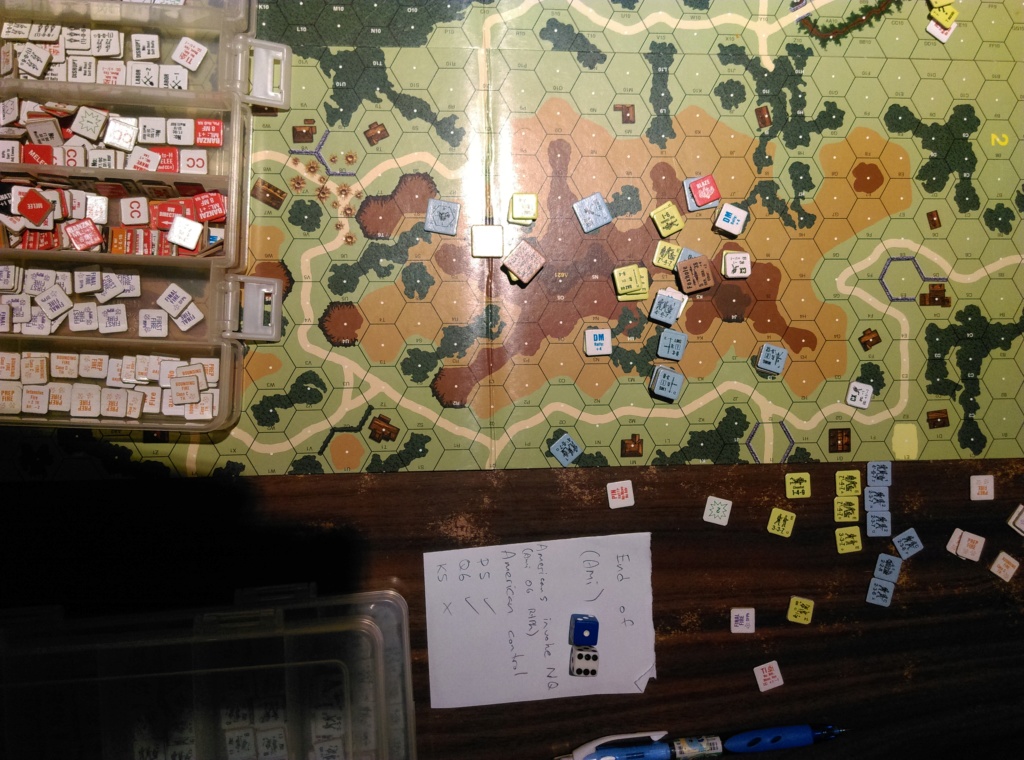 Hill fights are often harder than they look, but Little Wolf is learning better all the time.....