Last Sunday, we had another ASL meet in Taipei, this time in Gongguang at National Taiwan University (N.T.U.). The scenarios played and completed were DASL-02, ASL-182, and T-08.

Kang Yu (Ken) had asked me to arrange a 3-player scenario for Neo, himself and I. The scenario I chose was DASL-02 "Berserk!".

This scenario occurs in Stalingrad, and features 17 (mostly elite) Russian squads, 3 leaders, and 3 MGs defending against 2 groups of Germans. The larger group with 13 squads, 3 leaders, and 4 MGs, the smaller group with 6 squads, 2 leaders, and 3 SWs. A special rule has it that one of the smaller group's leaders will go Berserk (A15.4) on a dr of 1 at the start of each German PFPh. If this specific leader goes Berserk at any time, then all ADJACENT German units also go Berserk. To win, the Germans need to have more unbroken squads in building dL1 than the Russians at the end of 7 full game turns.

Kang Yu played the Russians, and wasted no time exchanging his 8-1 leader for a 10-0 Commissar (A25.22), this guy would become a key ingredient of the Russian defense. Neo played the larger German group, and made 2 MG towers directed by leaders. I played the smaller German group, so as to better manage the SSR4 Berserk situation. I printed out a VASL map to get a more manageable hex size. I'm pleased to hear that MMP are updating and reprinting the DASL modules, but I still feel that the hexes are a bit too big. 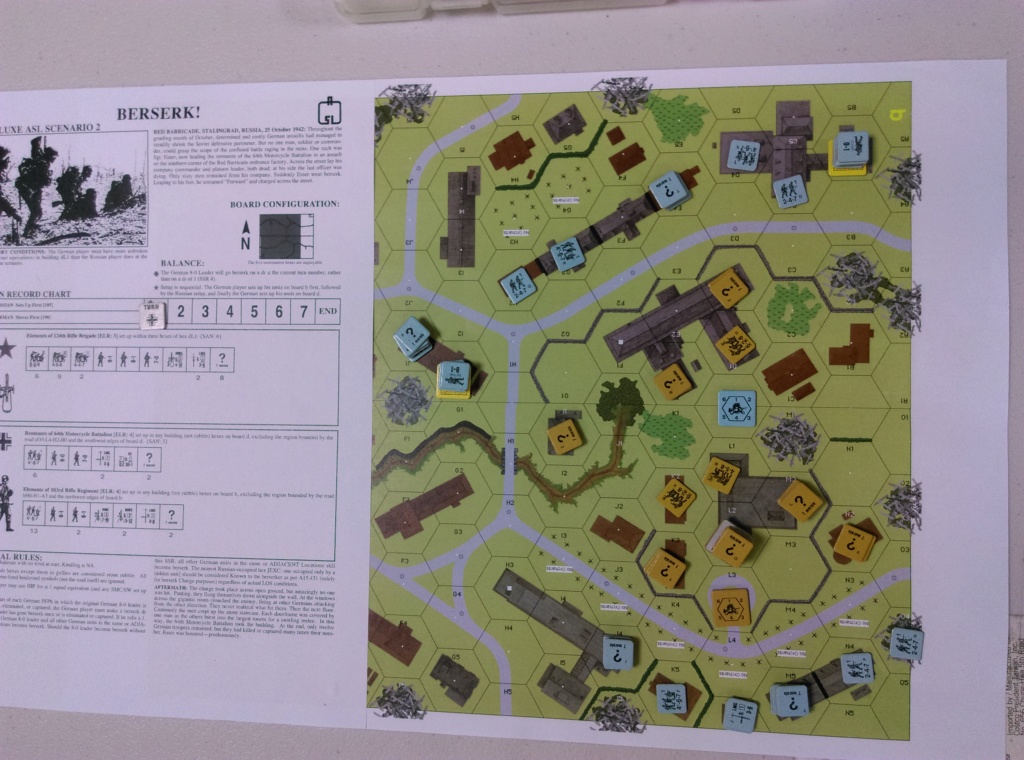 In the first turn, the twin German MG towers broke a few Russian squads, and Neo was able to get a few of his squads and half-squads into CC. But in the Hand-To-Hand (J2.31) CCs, the Russians gave as good as they got, and the Commissar rallied the broken squads immediately. My units tried to crawl east and cut in behind the Russians, but were met with stiff fire. 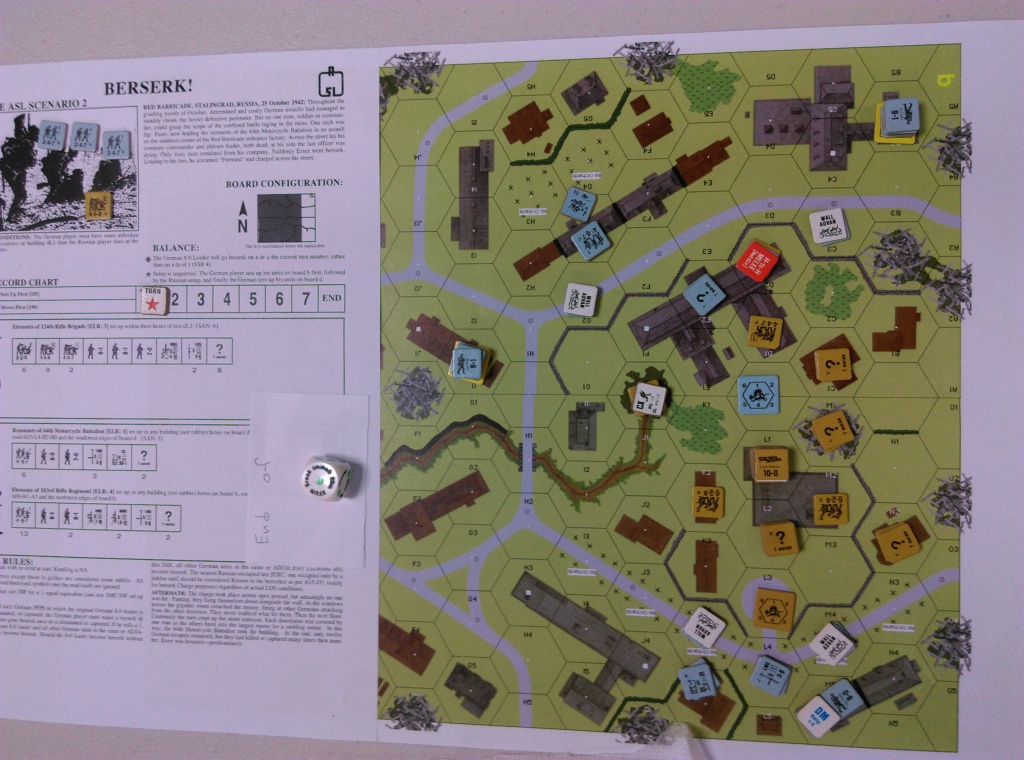 In turn 2, my units continued to take the brunt of the Russian firepower, so the only progress made was by Neo. Only a few Russian units remained on board b. 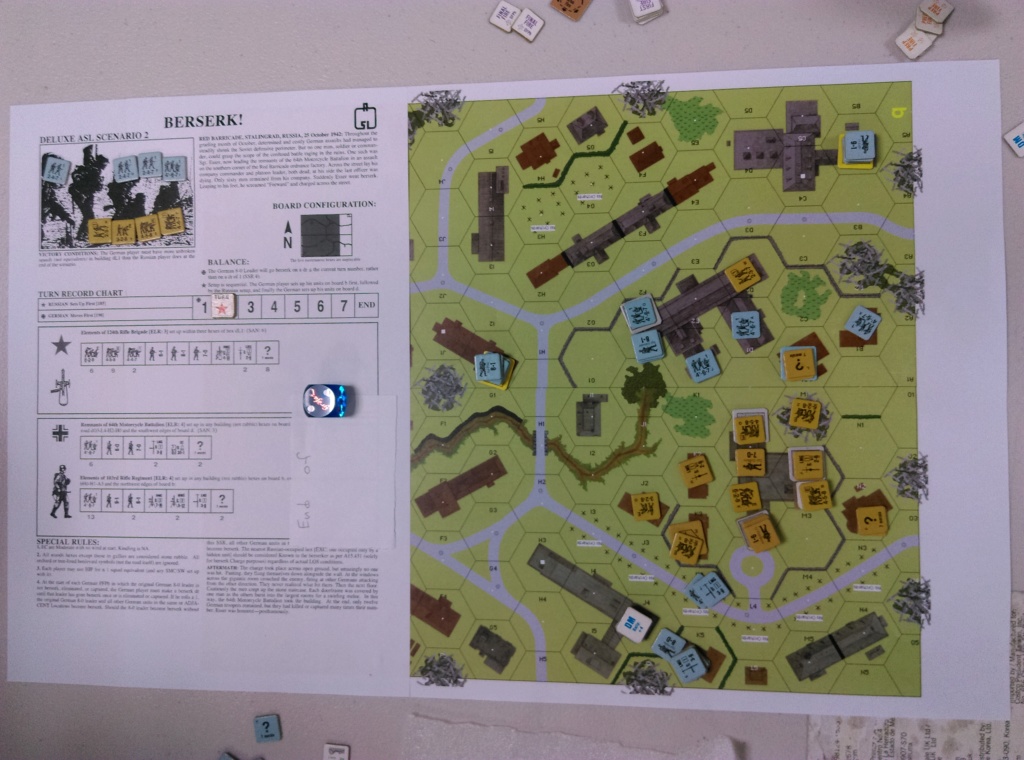 In turn 3, the German MG towers in bB4.2 and bI1.2 weren't able to break any Russians, and the Russians were able to stonewall the Germans. My units simply sought to recover, but continued to be feeble. 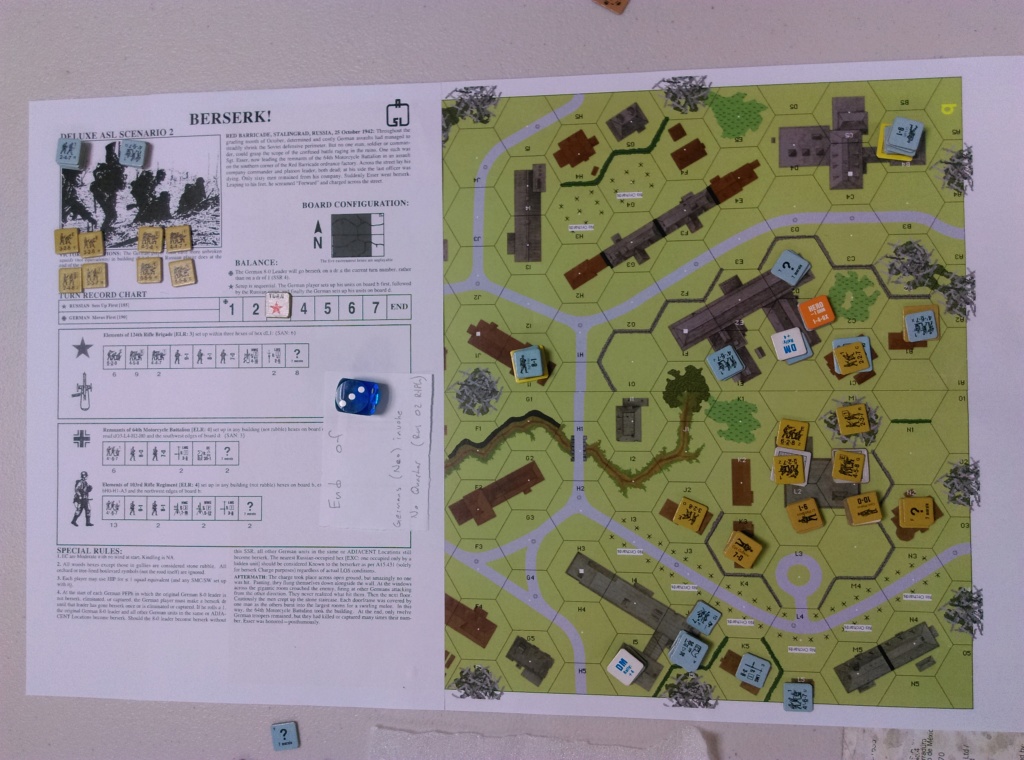 In turn 4, the MG towers again failed to make any impact, and the Russian defense looked resolute, which was a lot more than could be said for my sorry lot !!!! 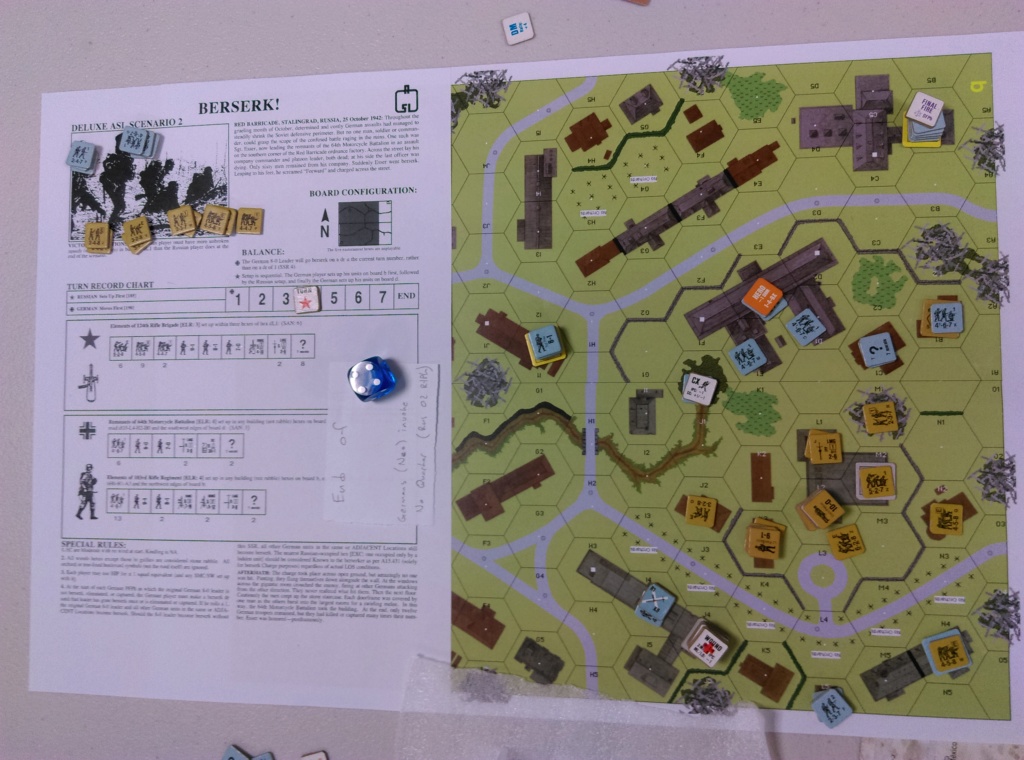 In turn 5, the (now wounded) German 8-0 goes Berserk, but the only adjacent units are a 247, 7-0 leader, and 6+1 leader (via Field Promotions, A18). The German MG towers broke up a few squads, but the Berserk charge largely failed, leaving me with 1 wounded Berserk leader, and 1 remaining squad. My units did draw a bit of fire at least, and Neo's Germans capture the dH1 stone rubble hex, which is an excellent jumping off point into the dL1 building. With 2 turns to go, we need to be entering German squads into the VC building quicker that the Russians can evict them. It's going to be a tight game by the looks..... 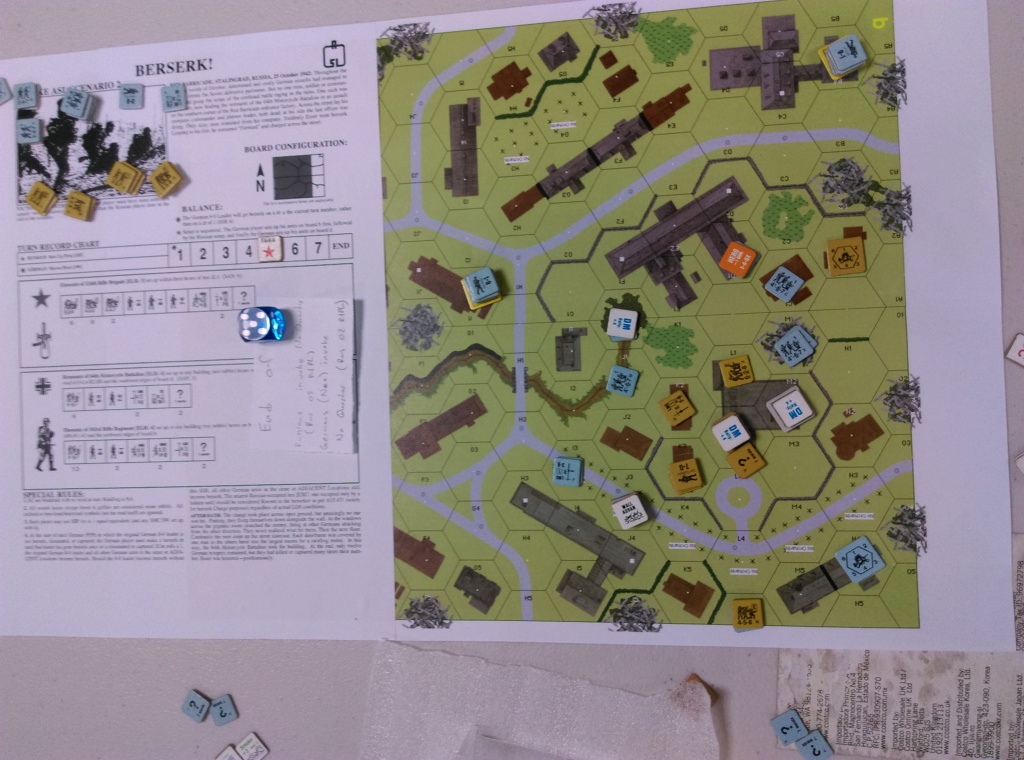 In turn 6, my only unbroken unit is a lone wounded leader, which continues its suicide charge as fast as its paltry 3MF will allow. The Germans get 2 squads into the VC building. The photo suggests that there are virtually no Russians left, but in fact, many of the Russian squads are in upstairs locations, which at the time of the photo were stored on a separate map to make the Russian APh a bit easier to manage. With 1 turn to go, the Russians still outnumber the Germans in the VC building by about 4.5 to 2, and look quite resolute. 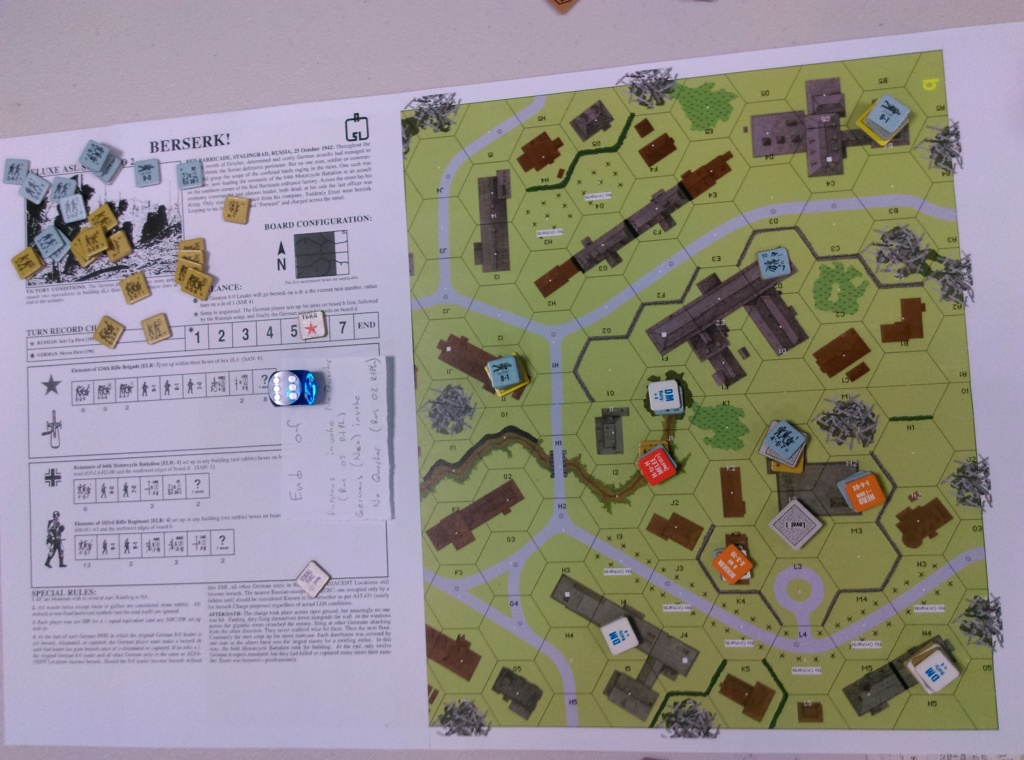 In turn 7 (the final turn), a key Russian squad (a Fanatic 628 in the gr floor of dL1) breaks, and this allows 3 more German squads to enter the VC building. However, some other Russian squads have been eliminated in the Rout Phase, and at the start of Russian turn 7, there are 3.5 Russian squads vs 5 German. In the PFPh, the Russians only manage to break 1, and they have 1 of their own break. The Russians will need to kill 2.5 German squads in CC with 2 SMCs, as all remaining unbroken MMCs are pinned. In desperation, the last 2 unpinned SMC throw themselves into HtH CC in the hope of a pair of lucky rolls. One of the SMCs even manages an Ambush (A11.4), but no damage is inflicted, and the Germans hang on to win by 4 to 1.5 unbroken squads. 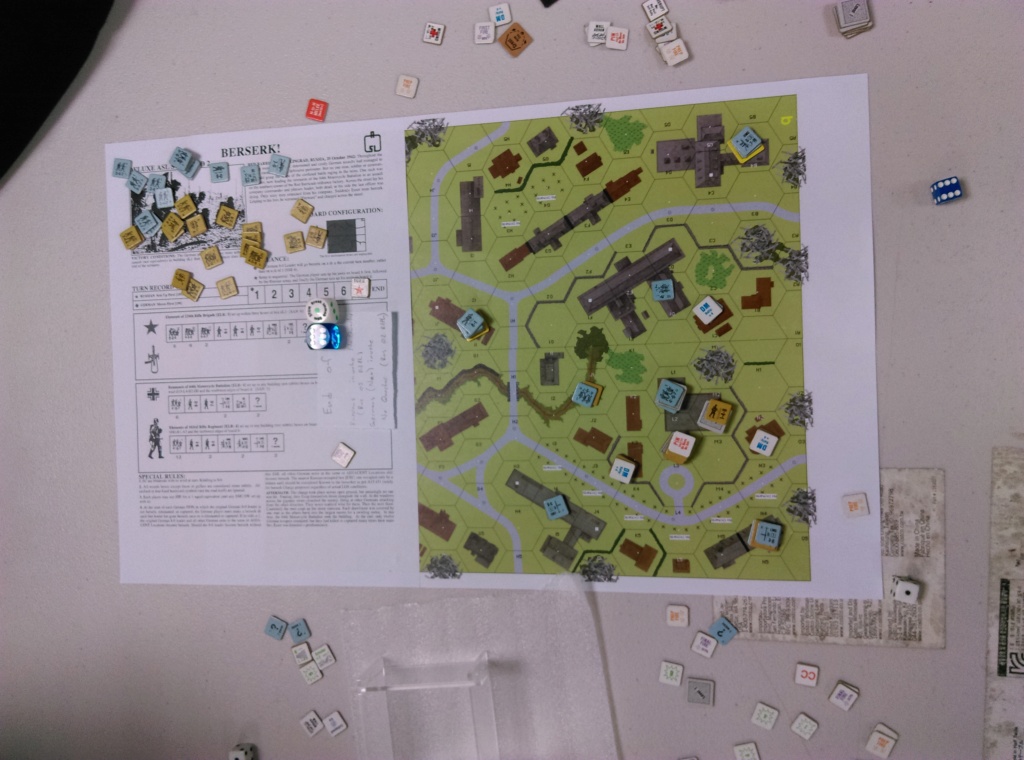 A real fun scenario to play from start to finish. The printed VASL map also provided a pleasant playing environment, too.

Later, when Little Wolf arrived, we split into 2 groups of 2 players. Kang Yu and Neo played ASL-182 "Strayer's Strays", which I thought was a very good choice, as its a very fluent game that encourages maneuver and counter-maneuver. I didn't get to see much of that game being played, but I did get a snap of Neo setting up his Germans.... 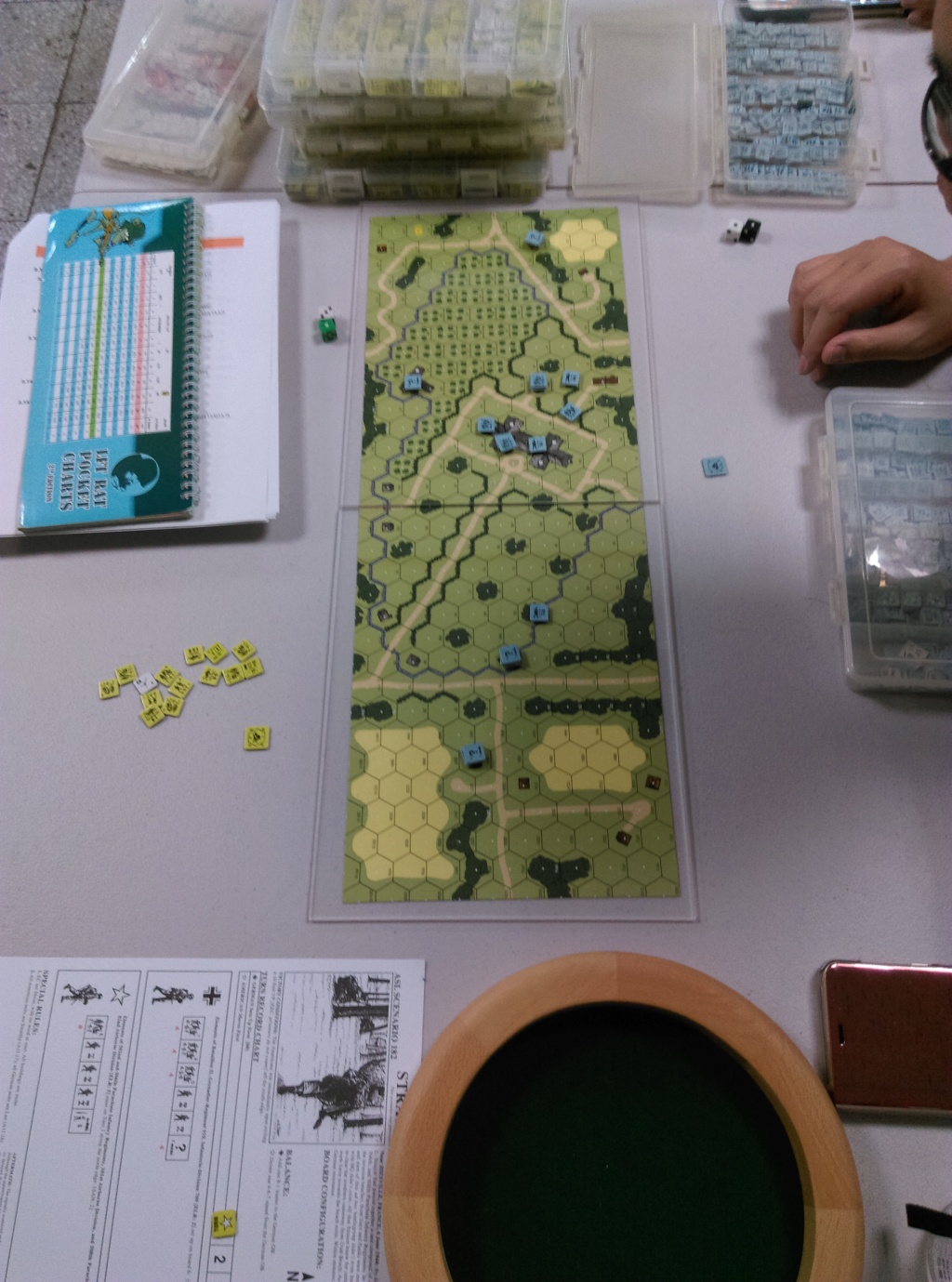 Little Wolf and I meanwhile played T-08 "Aachen's Pall". This 4 turn scenario takes place on the simple-to-read board 1 and features 5 German squads, 2 leaders and 2 HMGs defending their HQ (building 1G6) from an attacing group of 9 American squads, 2 leaders, 3 SWs, and an M12 GMC (which has a 155mm gun) with an Ammo Vehicle (E10) to help supply it. The Americans win immediately when no unbroken MMC occupies building 1G6. Little Wolf played the attacking Americans, whilst I played the defending Germans. I gave Little Wolf the American balance, which upgrades the 9-1 leader to a 9-2.

At the time of playing, I misunderstood the VCs, and we both thought that the Americans needed to control 1G6 to win. 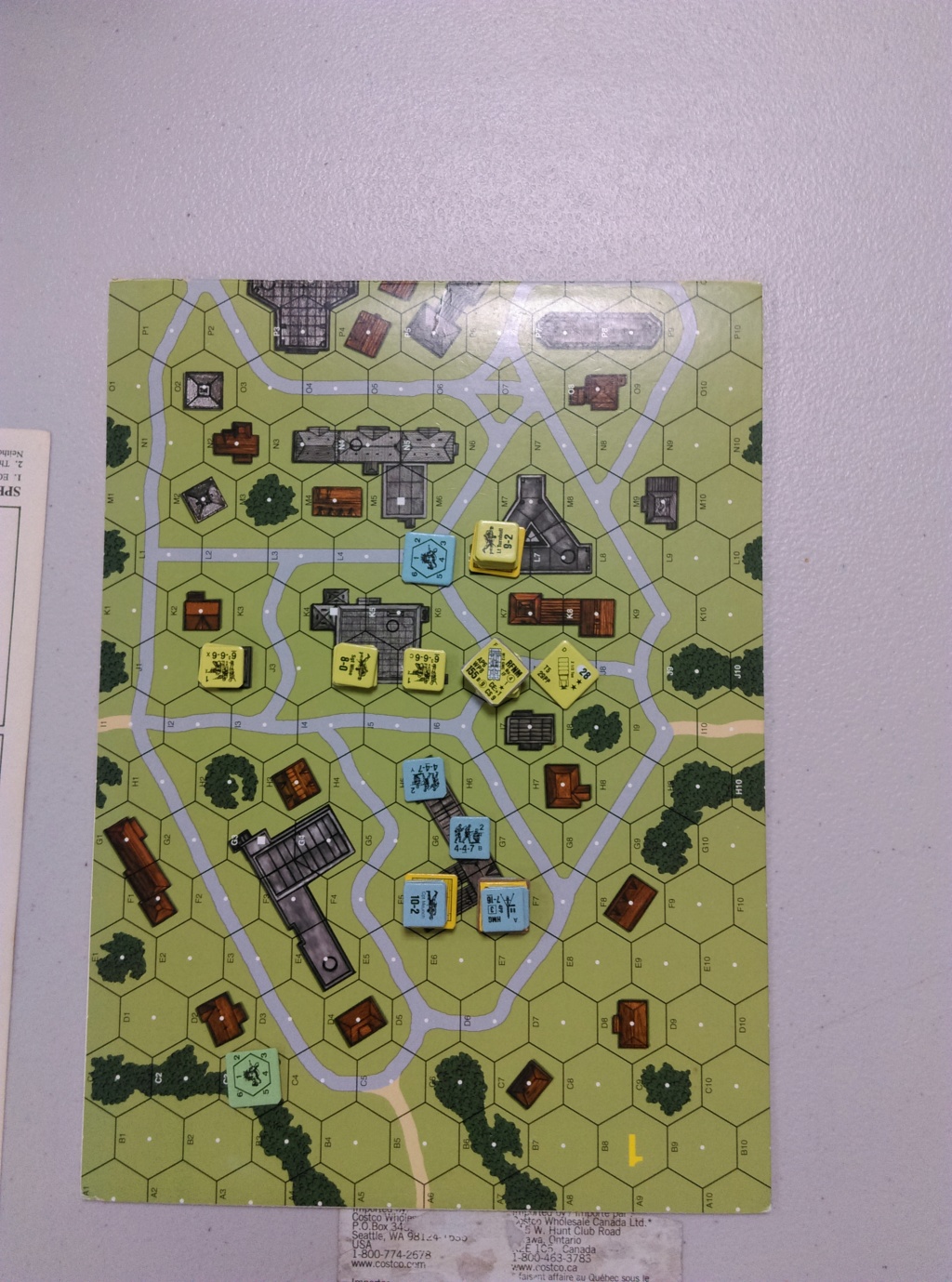 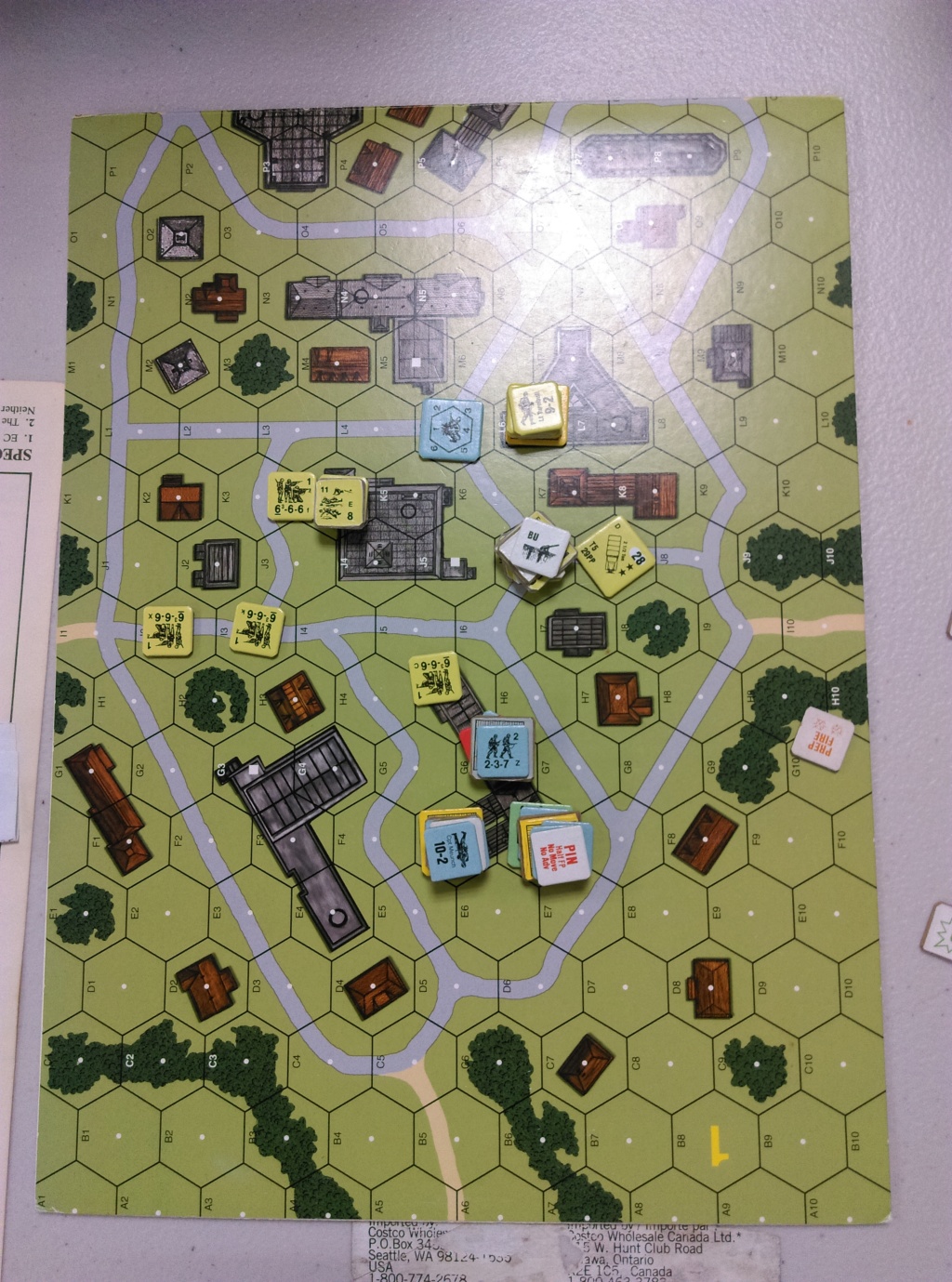 In turn 2, the M12 recovers, and the American squads push for the lone stairwell hex in 1G6. a large group of American squads assemble in building 1G4 so as to put plenty of FP on hex F5, which is the only hex that the 9-2 firebase (in L6) and M12 GMC have no LOS to. Despite most of my shooting being terrible, my morale checks are fantastic, and to give an idea, I generated 7 SAN opportunities for the American, of which they activated 5 of. That's a lot of SAN action for a modest SAN of 3 !!!! 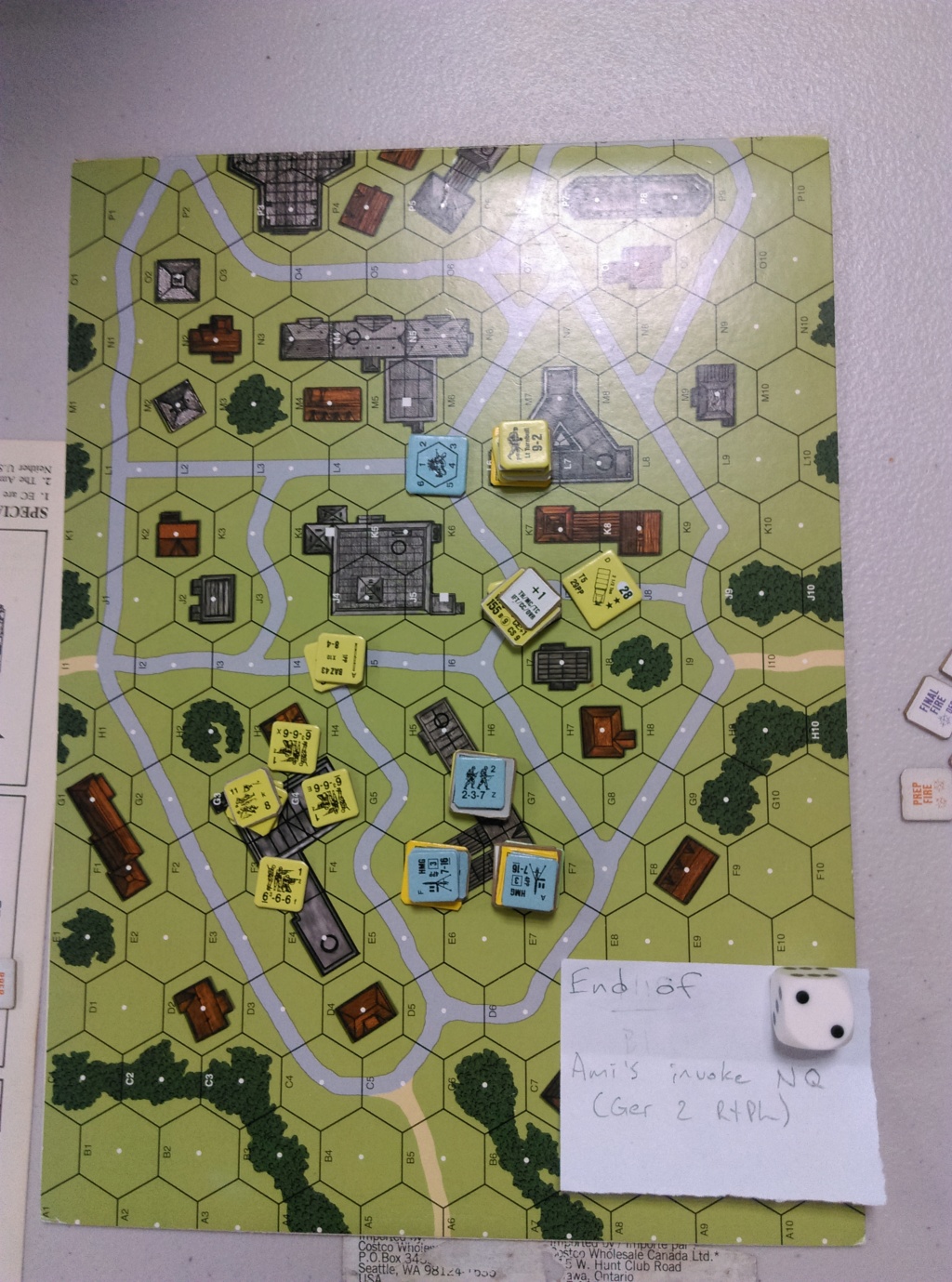 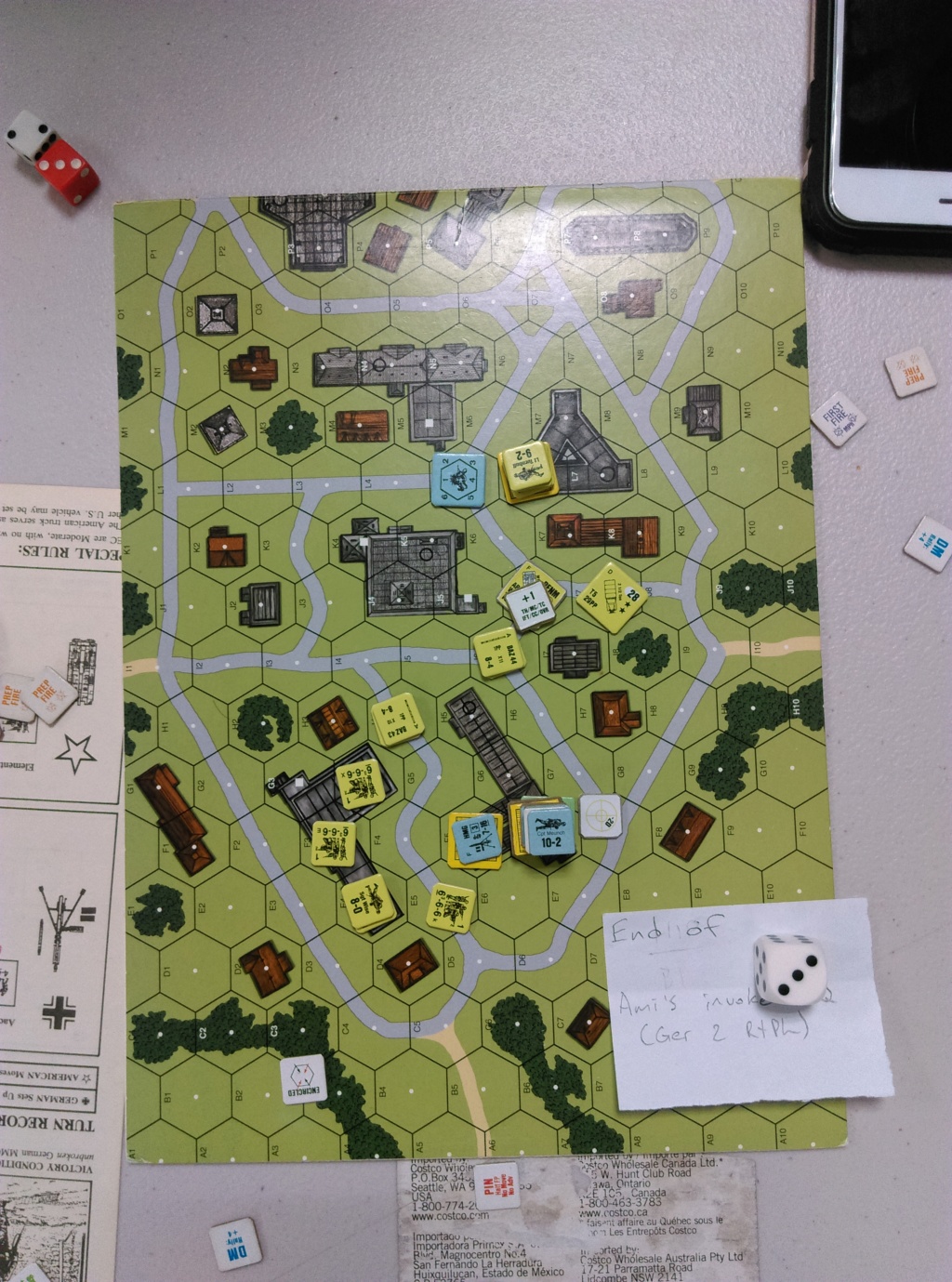 But in the final turn (turn 4), neither the 9-2 fire-group, nor the M12 GMG manage to make any impression, and 2 666 squads will have to come up the stairs in the hope of subduing them in CC. With smoke cover, both manage to get into CC, but the Germans get the ambush, go 1:4 @-3 vs both squads and roll 1,1 to eliminate both squads (the only casualties I would inflict) as well as create an 8-1 leader. We played out German turn 4 under the impression that the Americans would need to kill every last German unit in the 1G6 building to win, and once again, it was the humble '44 Bazookas doing most of the heavy lifting, killing off all but the lone (and now broken) 8-1 that was created in the ambush CC. We finished the game thinking that the Germans had won, but in fact it was Little Wolf's Americans who got the victory by eliminating every last MMC. 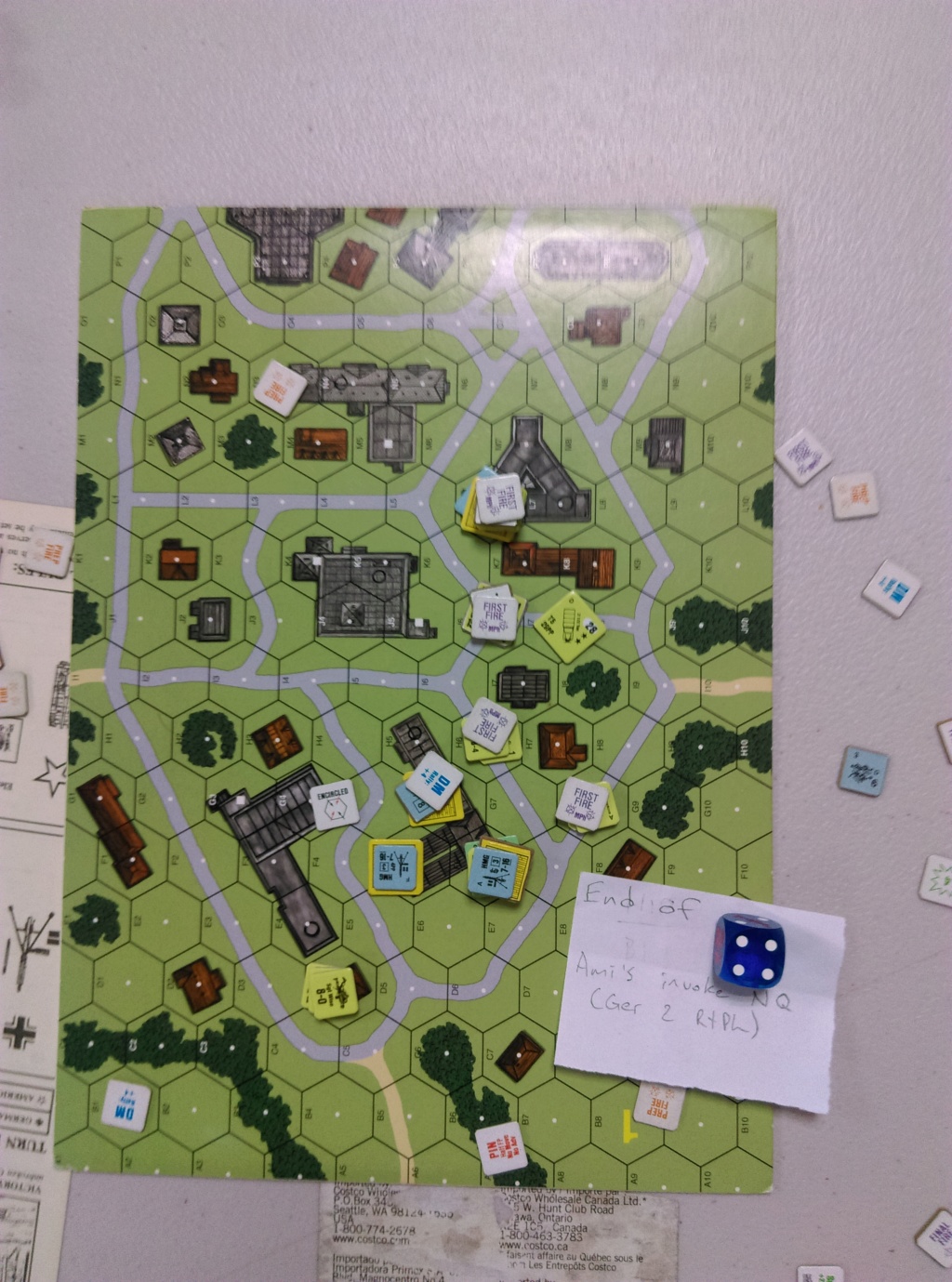 A good day of ASL, and a cherry on the top for Little Wolf, as it is now clear that he won the scenario that we initially thought that he had lost !!!