Last Friday evening, Robin and I completed our scenario of ASL-133 "Block Busting In Bokruisk". Robin played the attacking Russians, whilst I played the defending Germans. Russian balance (remove a German 8-0) was in effect.

My defense featured a number of half-squads to spread out amongst the multi-level buildings, MG teams to interdict the streets, and AT assets to wear down the supporting Russian AFVs. Robin initially attempted to advance quickly down the eastern side of the map (north is to the left), but this was met with wire, MG, and AT fire, which broke a number of truck passengers, wrecked a truck, and immobilized and UKed the ISU-152. However, the 9-2 led Russian 'buzzsaw' (MG fire-group) had been grinding down German half-squads with some impressive ROF tears.

In response, my Germans abandoned the 1F6 and 1G3 buildings, and was able to crystalize the defense around the central 1K4 building. Smoke from the SU-85s eventually allowed the Russians to break into the building, but a lone half-squad armed with an HMG continued to resist until the end of 6 turns. With only 2 turns to go, the Russians still needed to control 2 more buildings, which looked a little too much to do, especially since the Germans still had plenty of resources with which to block key stairwells, which is so crucial in fighting for multi-level buildings.

In turn 7, the Russians finally forced the remaining half-squad in the 1K4 building to surrender, the building was finally Russian controlled, but the Germans looked quite resolute in the final 2 buildings (that the Russians need 1 more of). The Su-85s were used to freeze German squads, but both were lost with virtually no impact. A number of Russian squads also broke, and it looked like the game was slipping away from Robin's Russians. However, in turn 8, the Russians did make some progress in and around the 1L6 building, and only a lone, wounded German leader managed to rout away, upstairs to level 1 of 1M7. In the final German turn 8 DFPh, the only Russian unit with a chance to affect the remaining leader was a hero 2 hexes away, armed with a FT in the same hex as a burning Marder wreck. However, Robin managed to get a 1MC on the leader, who failed first the MC, then the wound severity DR, which meant the Russians were able to control the last required building by the slimmest of margins. 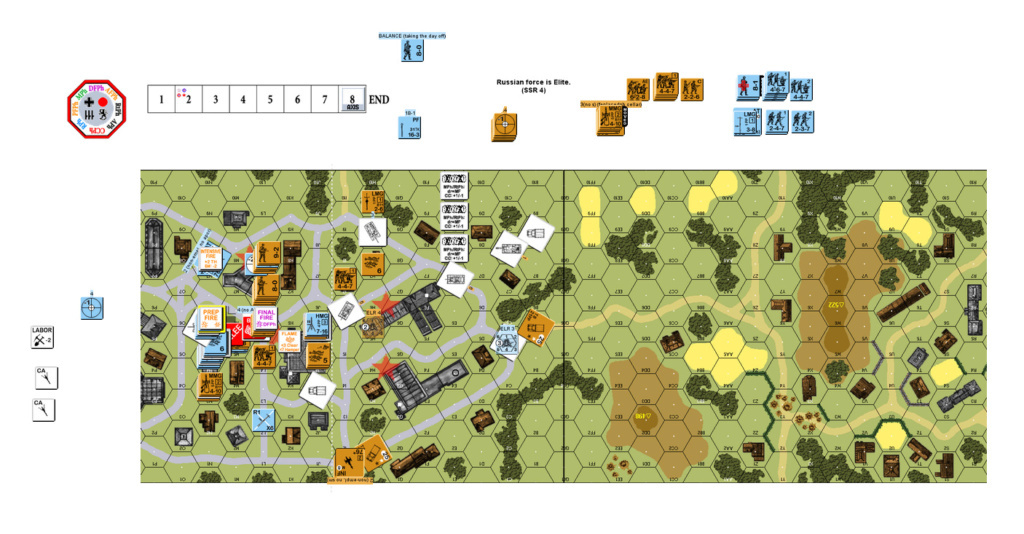 A very close game in the end. But more importantly, Robing gets a very good understanding of the nature of the urban environment, plus an appreciation of just how complex and difficult block clearing can be. A real fun scenario to play, too !!!