Last Sunday, we had another Taipei ASL meeting at N.T.U. in Gongguang. Robin and KangYu (Ken) started a game of ASL-023 "Under The Noel Trees", with Ken as the defending Americans, and Robin as the attacking Germans. We were also expecting Roy for a 3-player game, but as he hadn't shown up yet, I set up a scenario of FT-198 "Full Of Fire" to play against Neo, with myself as the defending as Germans, and Neo as the attacking Americans. However, just as I'd finished setting up Germans, Roy arrived, so I stepped aside for Roy to play against Neo, using the defensive German setup that I had just made. Once again, I printed out a VASL map for FT-198 (my feeling is that the actual boards are a bit too large), and Neo and Roy were more comfortable playing on it than the actual boards..... pretty as they might be. 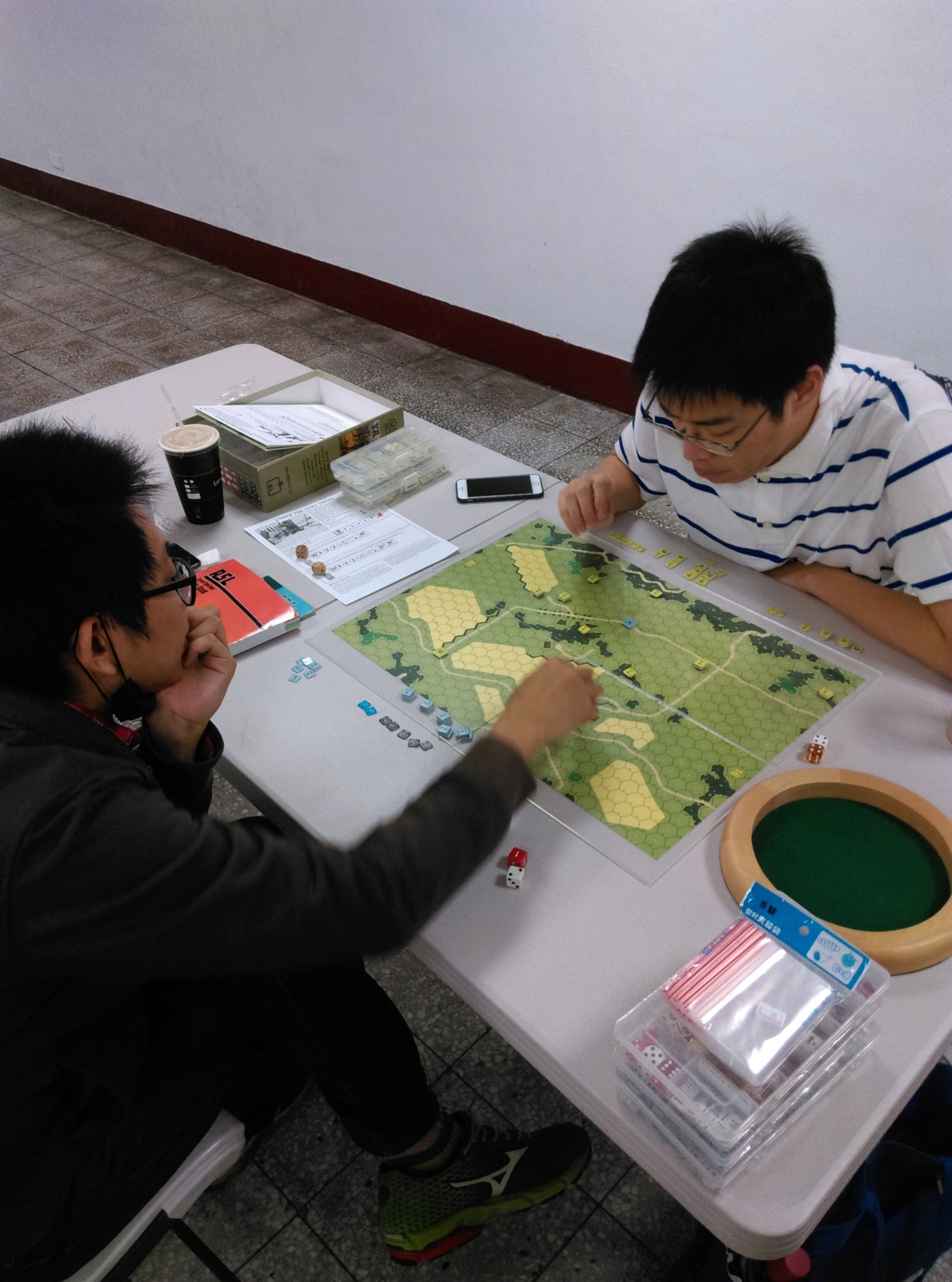 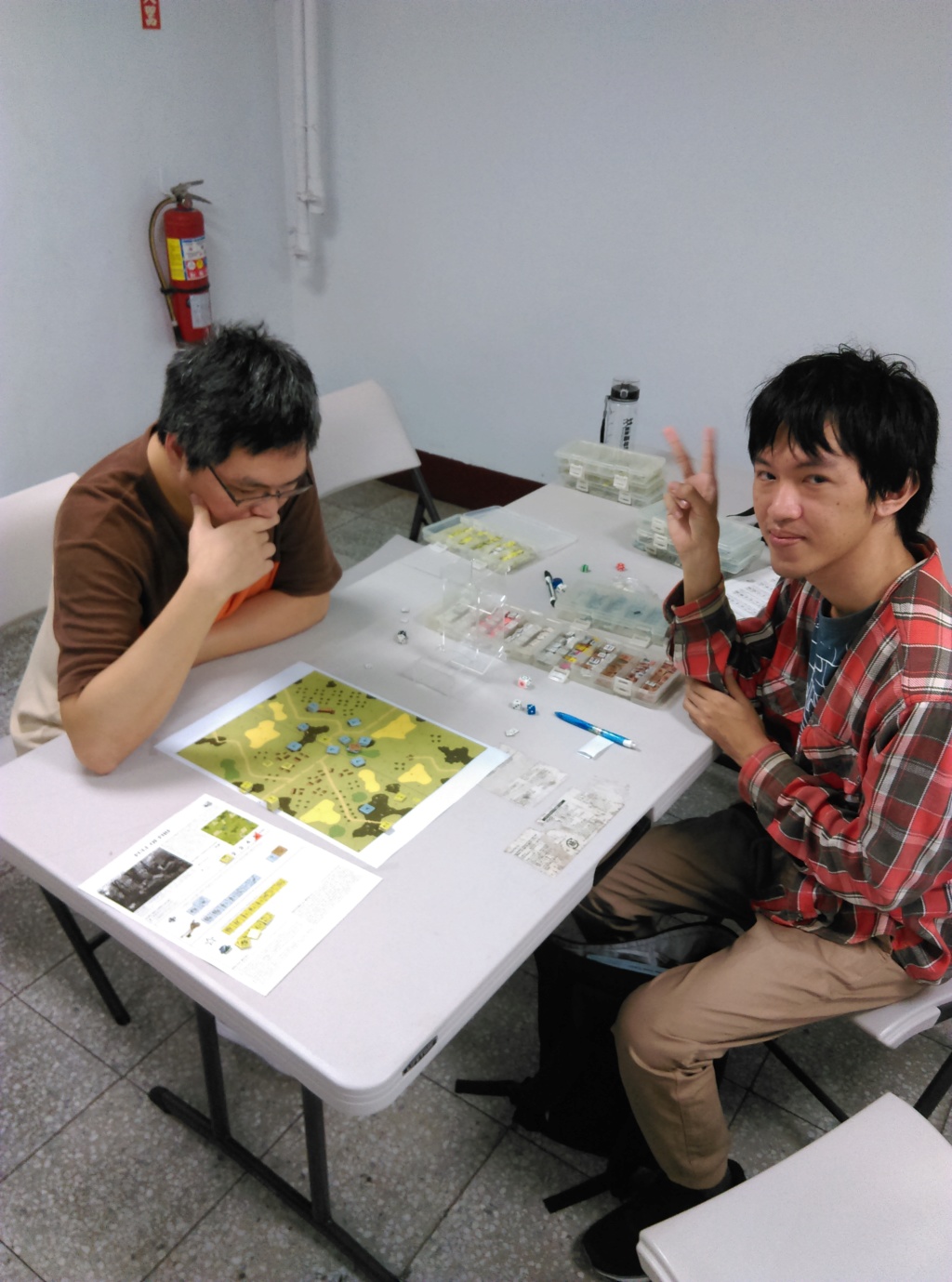 Robin and Ken's game of ASL-023 did not go well for Ken's Americans. Despite ambushing Robin's AFVs with HIP Baz teams and getting 3 hits, the FTK DRs of 12, 11, and 12 did not make much impression on the advancing Germans. To make matters worse, both M-18s were knocked out without getting a kill, and their loss along with the now pacified Baz teams resulted in a quick victory to Robin's Germans.

In Neo and Roy's game of FT-198, Neo's Americans were hit early, often and hard. The 50mm mtr got back-to-back Critical Hits (C3.7), the German SAN killed the American 9-2 leader, and the 105 guns were also dishing out some murderous fire. In the face of this, Neo continued to chip away, and when one of his Bazookas got a critical hit of their own vs one German gun, the Americans were still in it. But the remaining Germans were still able to continue putting a hurt on the Americans, and when American casualties reached 12 CVPs, Roy's Germans had clinched the game.

Robin had to leave early afternoon, so the 2 round pairings were Neo and Roy playing ASL-162 "Armored Car Savikurki" (with Neo as the defending Russians, and Roy as the attacking Finns), and Ken and myself playing ASL-179 "Ranger Stronghold" (with myself as the defending Americans, and Ken as the attacking Germans), with German balance in effect, which extends the game from 6 turns to 8 turns !!! Towards the end of the afternoon, Little Wolf also showed up, just to say hi, and check out the tail end of the round 2 games.

I didn't manage any photos of Roy and Neo's game of ASL-162, but with about 1 turn to go, it was looking good for Roy's Fins, with 4 of 5 VPs already exited and 2 squads remaining onboard. But no further Finnish units were able to make it off, and Neo's Russians hung on to win that game.

I set up the Americans in a reverse-slope fashion, and prepared to try and delay the Germans for as many of the 8 turns as I could. Doing this on turn 1 will allow the Germans to grab quite a bit of ground, but since they can set up no closer than row W, they have a bit of ground to initially cover. What I don't need is to see my units getting smashed by a hot initial German bombardment; survival is the key here !!! 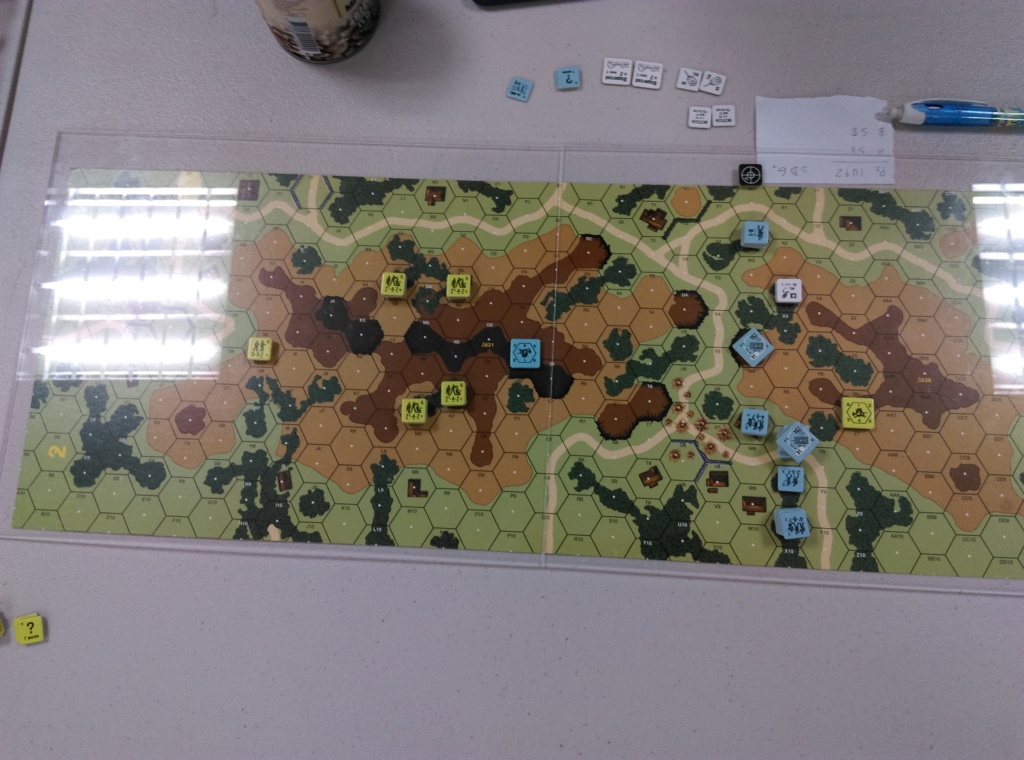 In turn 1, the Germans pushed eastwards, with 1 tank in a level 2 overwatch position, whilst the other covered the norther flank. H5 was planned to be my 'Alamo" (point of no return) position, and I began trying to entrench from the very first turn. I was tempted to assist with the 10-3, but I kept him instead closer to the front-line action. 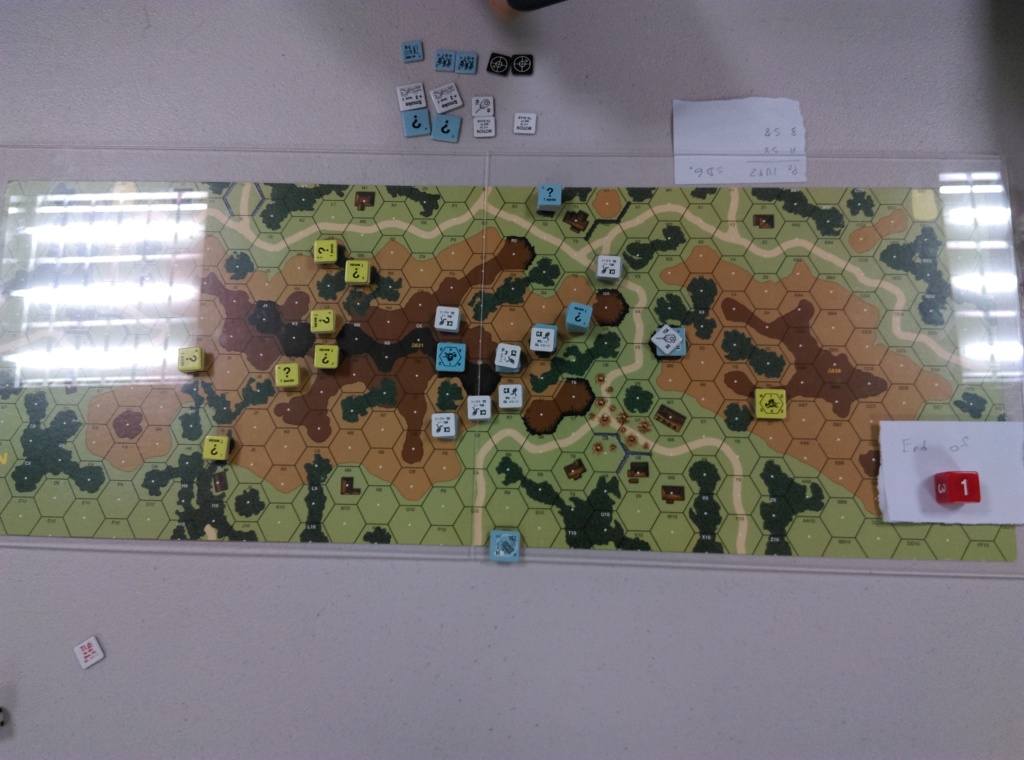 In turn 2, the Germans continue to advance, and by the end of 2 turns, they are ready to assault the Americans at close range. My Americans are basically in 2 groups, 1 each side of the J4/K5 hill. Ken does not want to offer my (4) bazookas any chance to hit, so the tanks keep their distance for now. 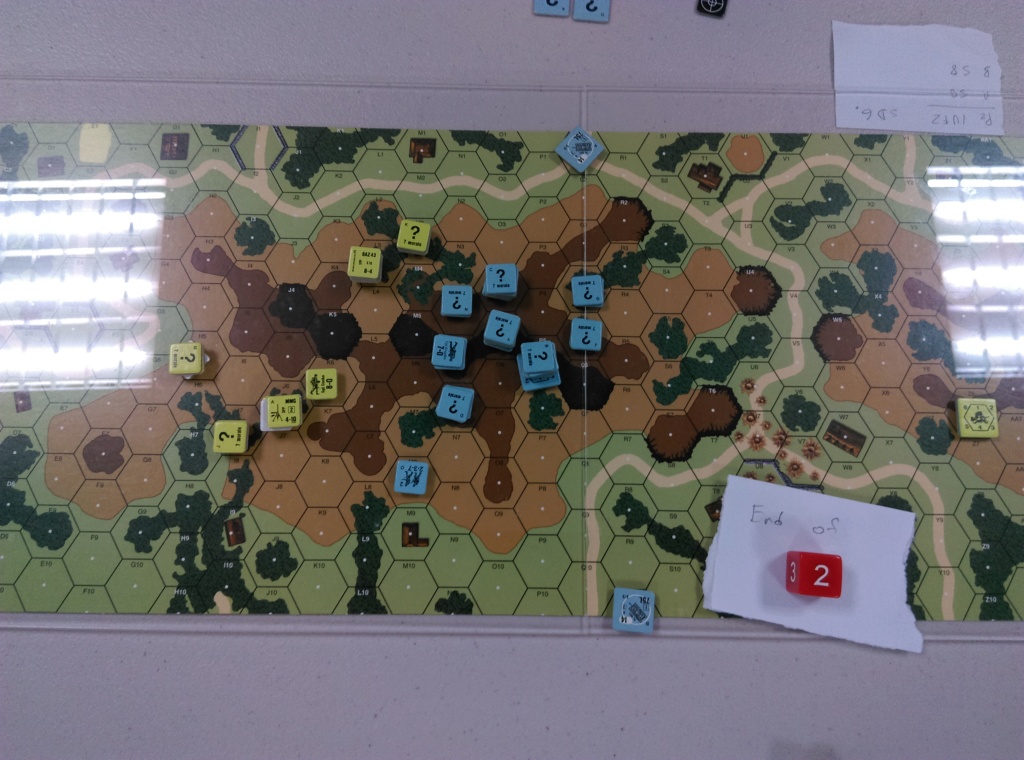 In turn 3, my infantry in reverse-slope positions make long range shooting impossible for the Germans, and they are forced to give my Americans the first shot. But once they are at a near range, they can use Assault Moves into the woods, hoping that enough will survive to flush out the Americans and force them back. One of my squads breaks, but my Americans mostly hold up. 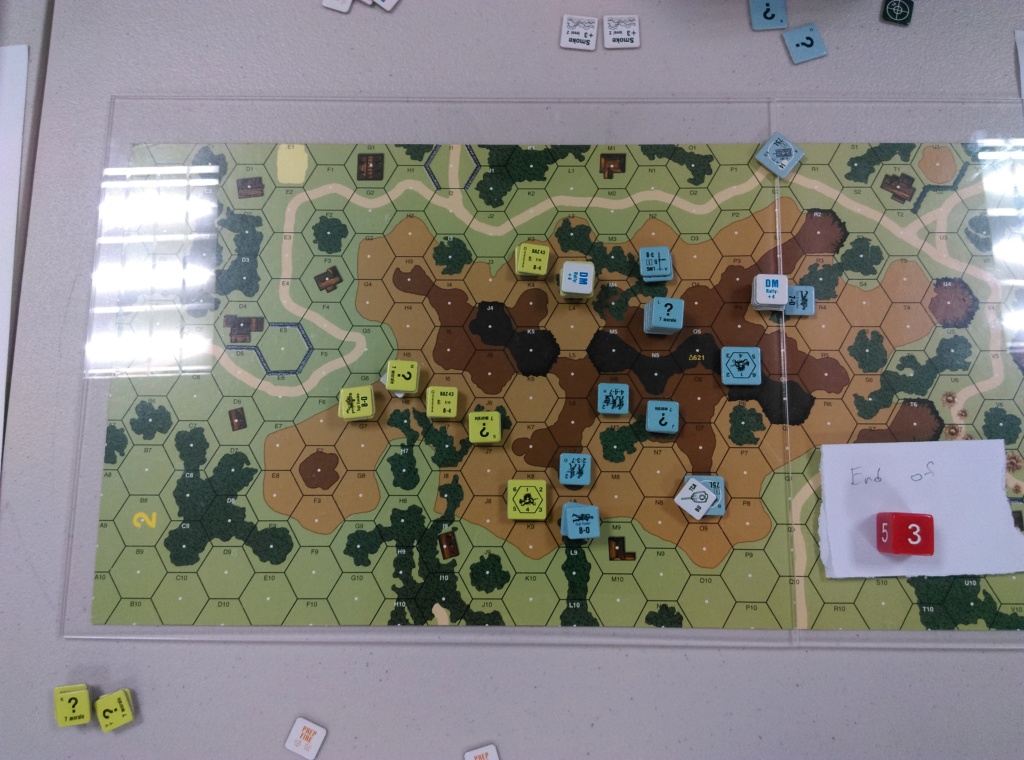 In turn 4, my Americans are eventually forced back out of the woods. But one squad manages to Entrench (B27.11) in K3, which is a great bazooka position, and with the 10-3 covering it from behind, it's not easy for the German infantry to get at them. A few German squads have been KIAed, and all I have lost is a bit of ground. So far so good..... 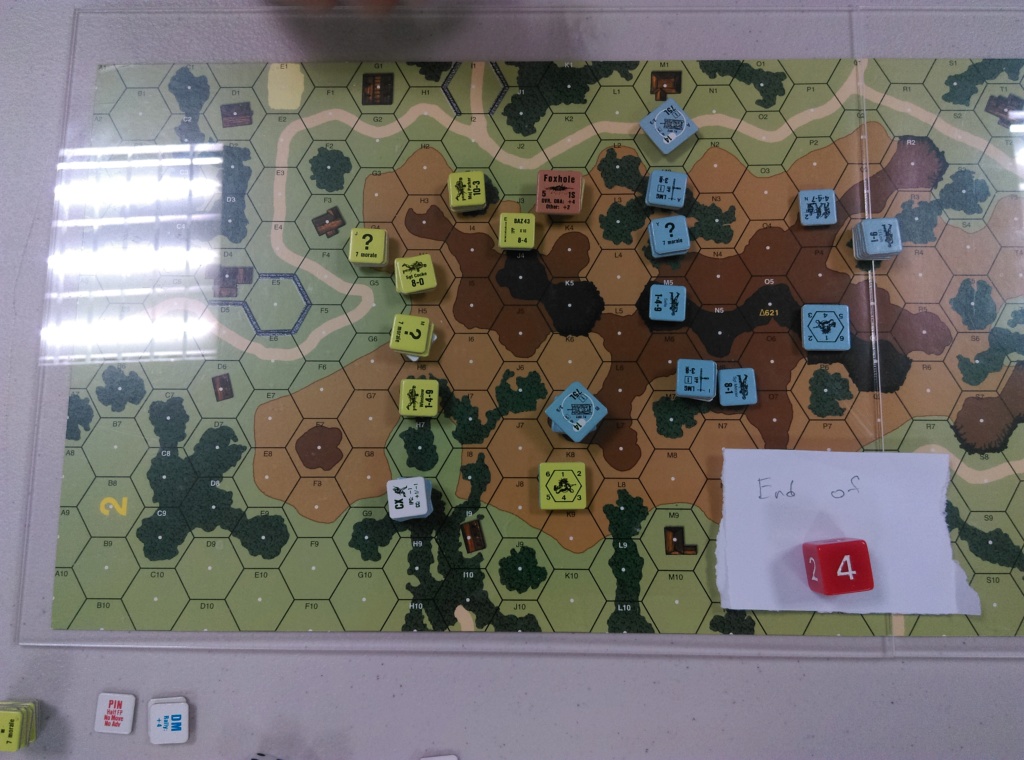 In turn 5, I am able to dish out some more damage to the Germans, as well as dig a second foxhole in H3. However, only about half my force is currently in the VC area, and a small group of Germans has managed to get behind me. 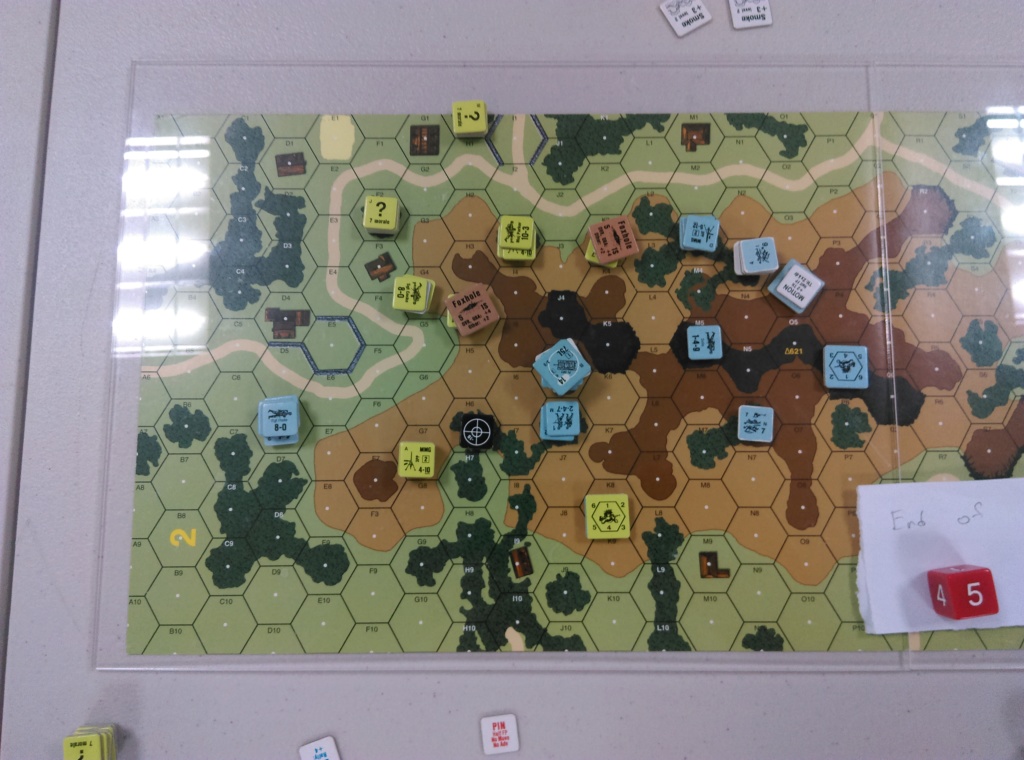 In turn 6, the Germans get more aggressive with the tanks, and one bazooka manages a hit, but the 11 TK DR doesn't help very much. By the end of it, I lose my first squad, and am simply trying to keep as many units alive as possible, even at the price of being forced just out of the VC area (I always have the possibility of running someone back in the last turn). 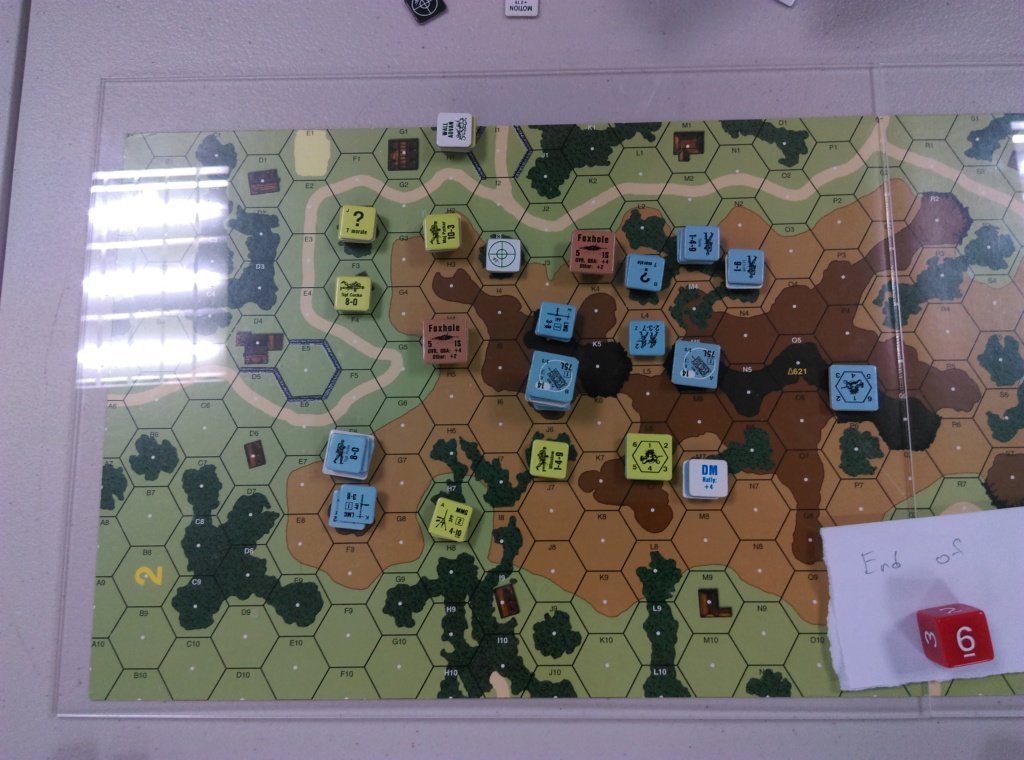 In turns 7 and 8, the Germans go all out, but I have only lost 1 squad, so they will have a lot to do. I get 2 more bazooka hits (and unfortunately miss on a TH9+1 point-blank rear shot), but the TK DRs of 10 and 11 fail to flatter. Now my units are starting to fail their MCs, and the Germans are having the better of it.

(unfortunately, I forgot to take a photo at the end of turn 7)

By my turn 8, there are no unbroken units in the VC area, and only 2 GO units (the 10-3, and a (created and currently wounded) 149. The 149 (now a 138) is killed trying to reach the VC area, and my 10-3 takes the majority of the remaining German fire (including both tanks at close range). However, he manages to survive al the fire, and advances to H1 in the final APh to claim victory for my Americans. Ken played a good, patient game of it, and did an excellent job of just about running over all my units in the end. 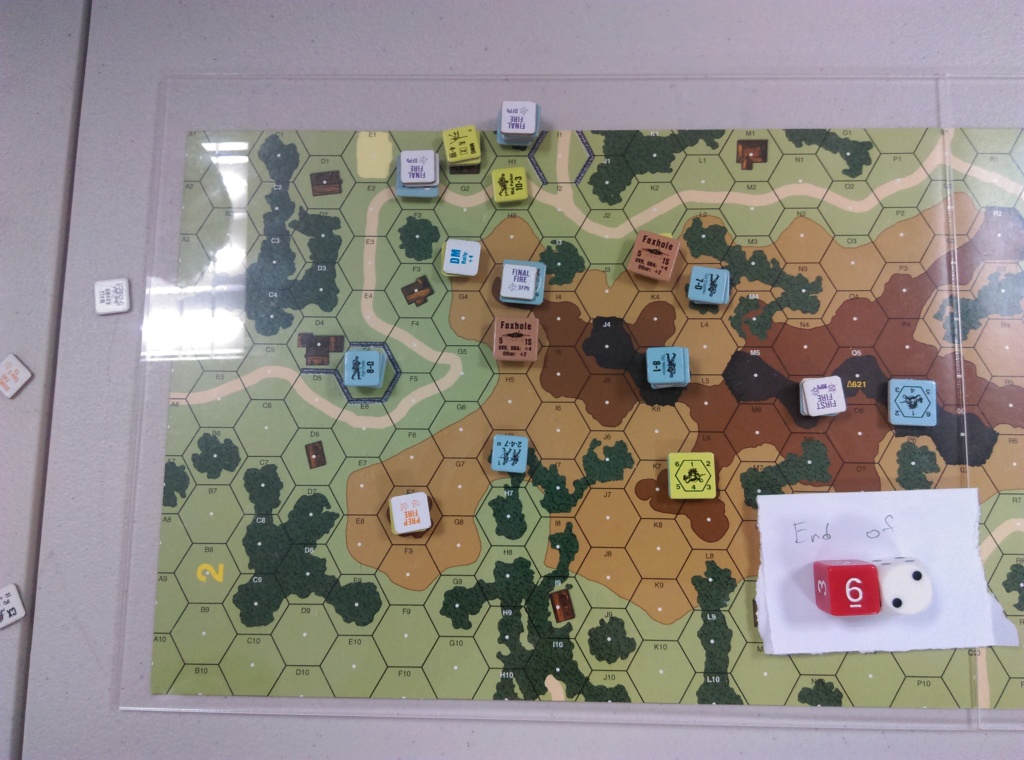 It looks like we'll be doing our future ASL meetings here at N.T.U. on the first Sunday of the month. Sweeeeeeet !!!! 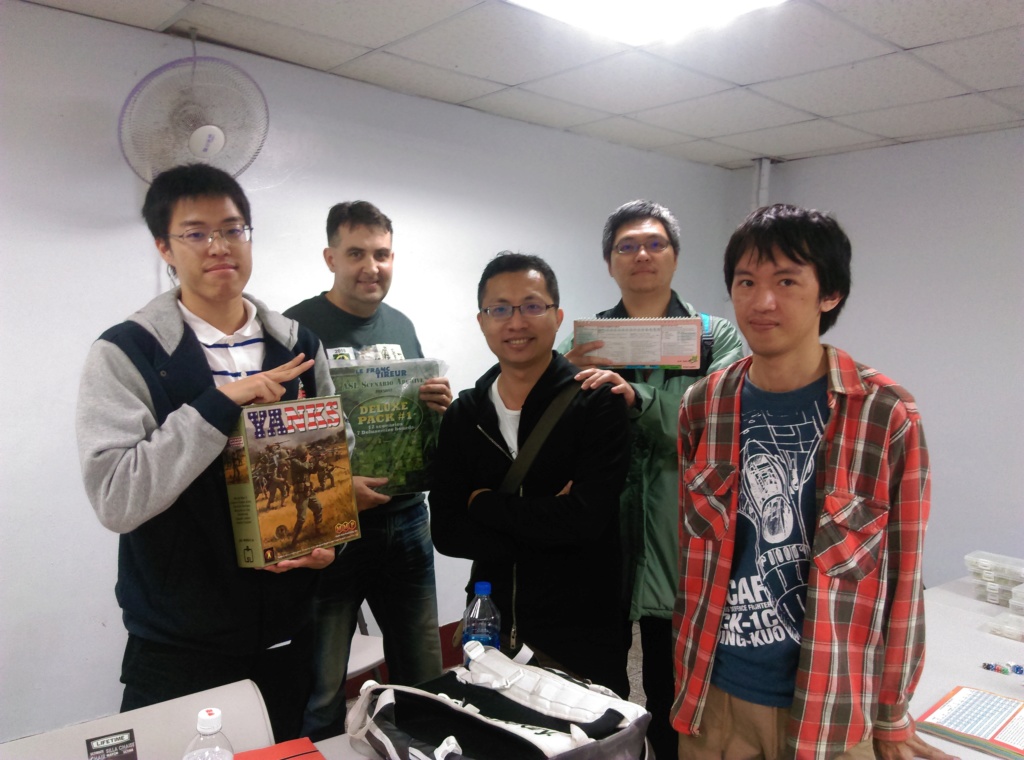 (from let to right: Ken, myself, Little Wolf, Neo, and Roy)