Last Sunday, we had our monthly ASL meeting at N.T.U. in Gongguang. Just 4 of us this weekend (Robin, Neo, Ken, and myself), so furthering our quest to complete all the Beyond Valor scenarios, Robin and I played ASL-130 "Debacle At Korosten", with Robin as the attacking Russians, myself as the defending (and later counterattacking) Germans. Ken and Neo prepared to play another Beyond Valor scenario, too. They chose ASL-126 "Commando Schenke", with Ken as the defending Russians and Neo as the attacking Germans, in order to familiarize him with using FTs and DCs.

This scenario depicts a dawn cavalry raid behind enemy lines and is played on boards 3, 4, and 5 where all buildings are single-story and wooden. There is also a +1 LV DRM throughout the game to represent the dawn twilight. To win (immediately), the Russians need to inflict 17 CVPs and exit 24 Exit VPs off the south edge of board 5, with double Exit VPs for units that exit as cavalry. The Russians attack with 18 527 squads, 4 leaders, 4 SWs, and have 18 (squad size) horse counters to ride into and out of battle. The Germans initially defend with 3 447 squads, 10 237 half-squads, 7 leaders, 3 SWs, a 127 crew, and an abandoned at start PSW 231 (8R) armored car. We didn't play with any balance in effect (and probably as well, given that both are rather radical), but since the original Cross Of Iron (C.O.I.) version featured Battlefield Integrity (A16), I thought it most appropriate that we play the scenario with A16 in effect.

I played this scenario once before as Russians, and in that game, my German opponent had placed all 3 squads with MGs on the hills surrounding the village. Whilst a sound looking strategy in theory, what we found was that when a MG squad was charged, if so much as a broken HS survived in the target hex, it meant that the target MG squad couldn't fire outside of the hex, and it was a simple matter for the other cavalry squads to pull up adjacent and blast the helpless MG squad in AFPh with Assault Fire (A7.36), basically a variation of Vehicle Bypass Freeze. For the price of 3 horses and a few half-squads, I had quickly removed the cream of the German infantry and captured all of their MGs, and was subsequently able to complete the VCs well before the German reinforcements were able to make any meaningful impact. So, this time as the German defender, I was sure to put the MG squads in buildings !!! As Robin and I prepared to set up the game, Ken and Neo were setting up their own game of ASL-126 "Commando Schenke". 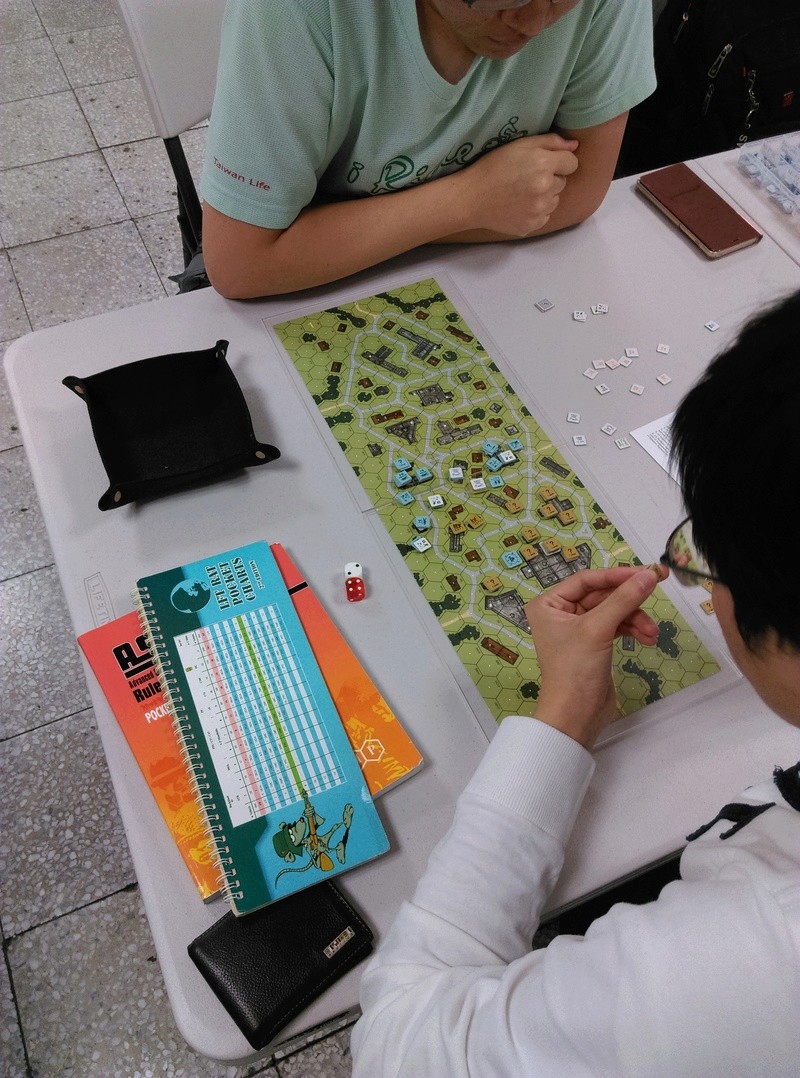 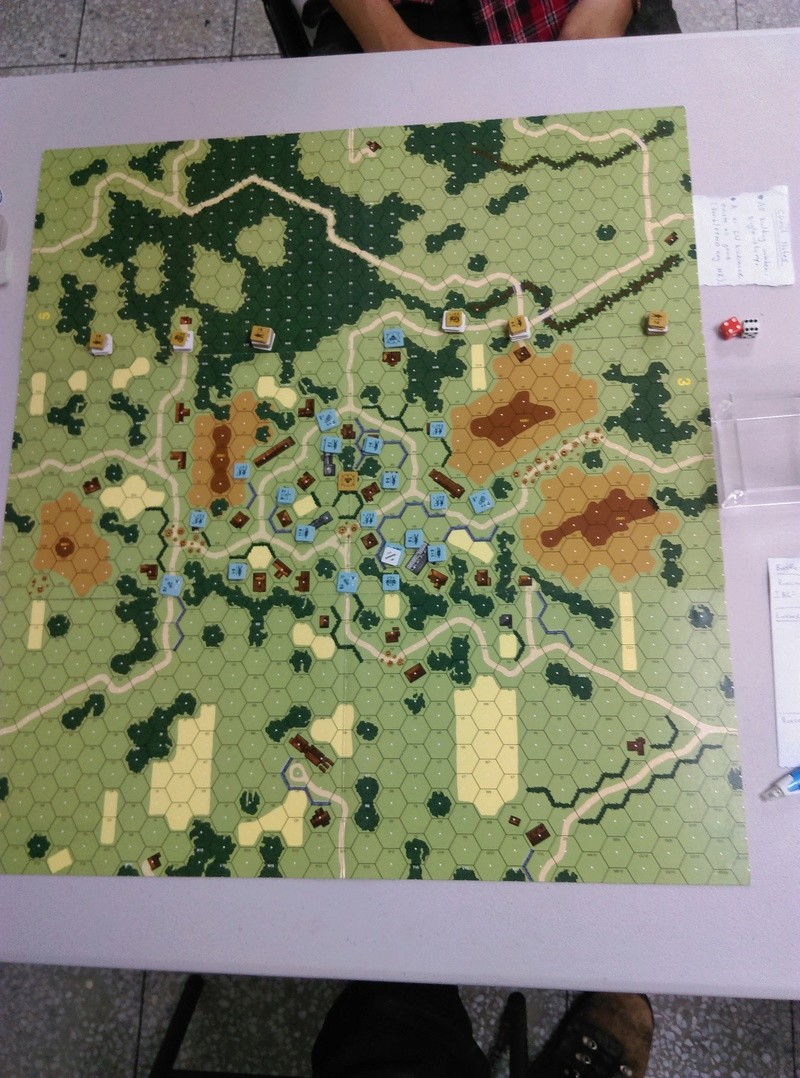 On turn 1, Robin advances fairly cautiously, and out of LOS for the most part. He wrecks both of the trucks, and eliminates a 237 HS in CC. I get lucky and also reduce a 527 squad in CC. I pull back as much as I can, and prepare the crew ready to enter the AC.

(Note that the Russian CVP total should read 3, not 2) 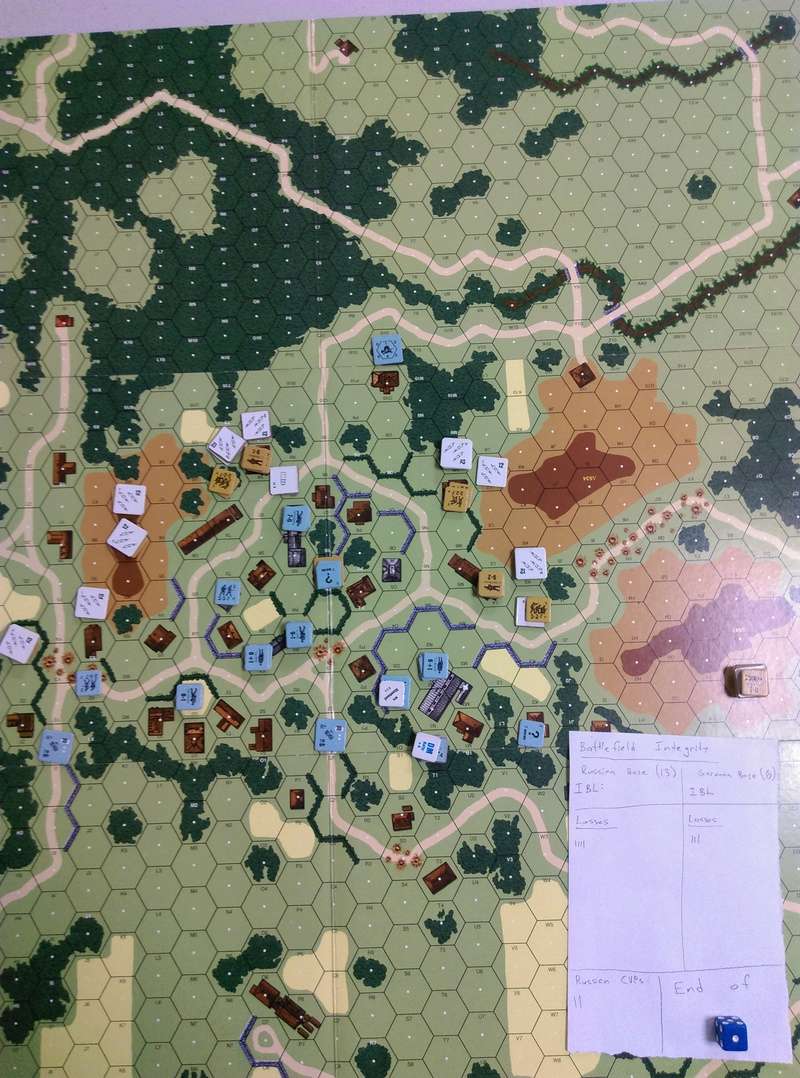 In turn 2, the Russians have by now dismounted everyone, and I lose 3 more CVPs. I manage to recombine most of the surviving HS and re-enter the AC, even as the ATR gets a hit that fails to penetrate the front turret. One Kubelwagen manages to flee to board 4, but the rest simply have to sit tight as best they can. I have married up a MMG and LMG squad, directed by the 9-1 to make a mini 'deathstar' . Robin manages to encircle them, but I am able to escape for now. The Germans take (and pass) their first BI check. 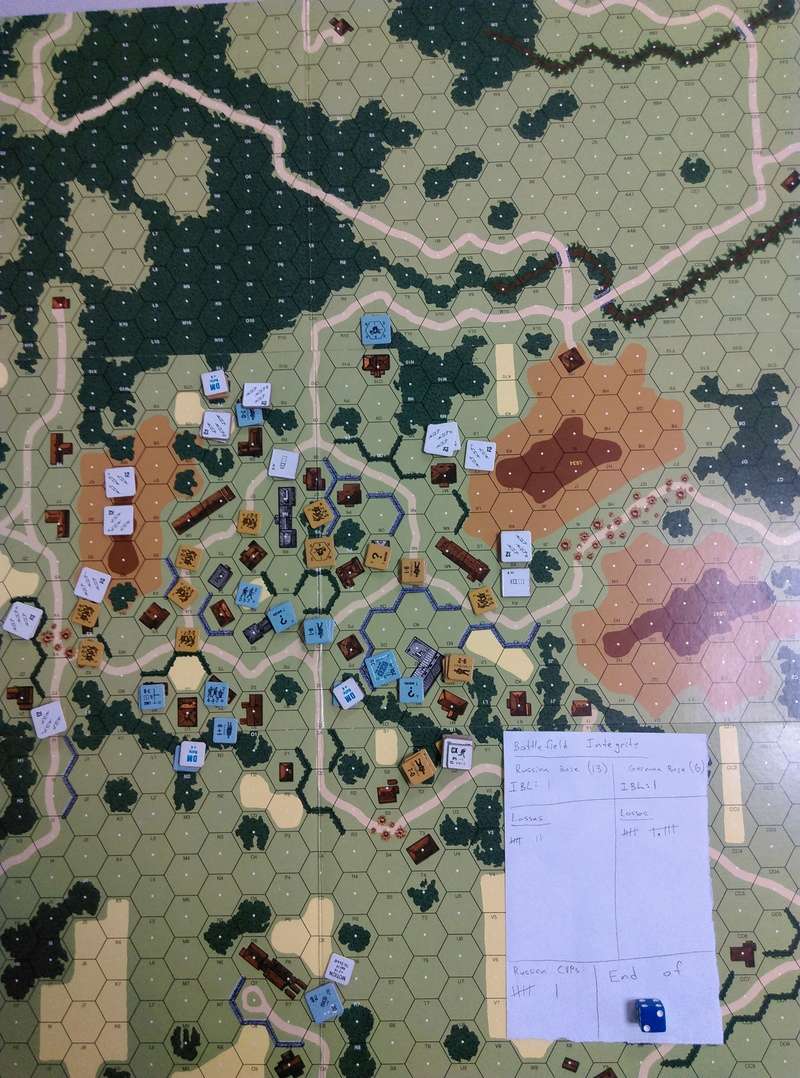 In turn 3, I lose another 6 CVPs, but the armored car escapes (despite a couple more hits), and heads towards board 5 to interdict the Russian withdrawal, unfortunately with a malfunctioned MA. The Germans take (and pass) their 2nd BI check. Robin has suffered a few Unit Replacements by now, and is having a bit of trouble rallying their 426 replacements.

(note that the broken Russian squad in 4K9 shouldn't be there) 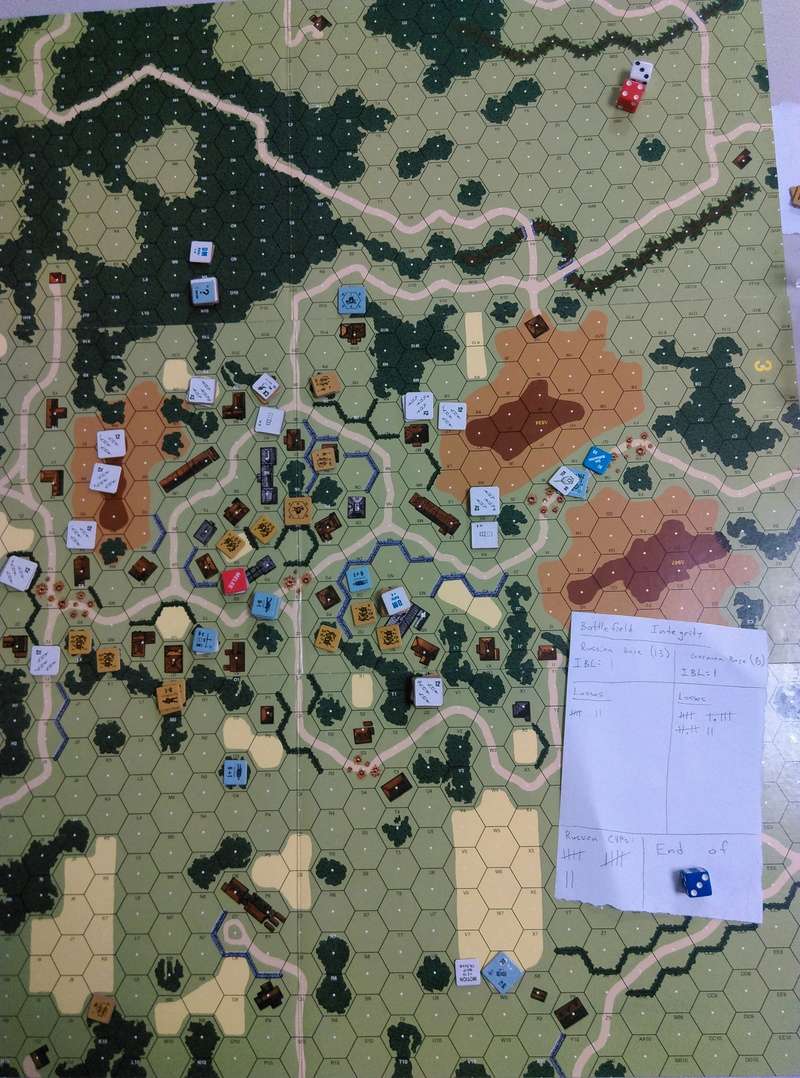 In turn 4, the German reinforcements arrive, and re-set the Battlefield Integrity losses to 0, whilst raising the German base to 11. With 6 AFVs and quality infantry, I should enjoy the upper hand. The Russian CVP total is currently 14, so the Russians still have to inflict 3 more CVPs before escaping.... 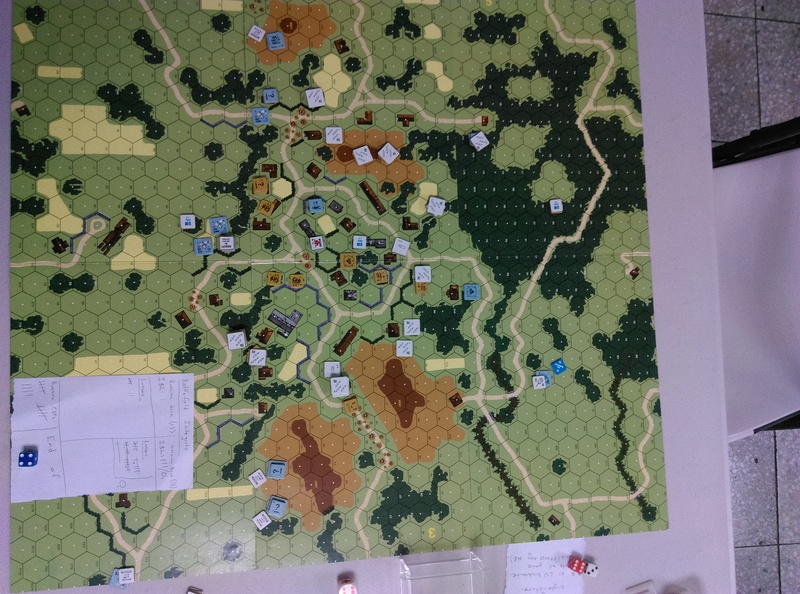 In turn 5, the Russians manage to wreck the PSW 231 (8R) armored car. The crew manages to survive, but even so, the 3 remaining CVPs takes the Russians to their target of 17. They now need only escape, but because it is too hazardous at this stage to ride horses in LOS, my relief force is able to catch up to the Russians. 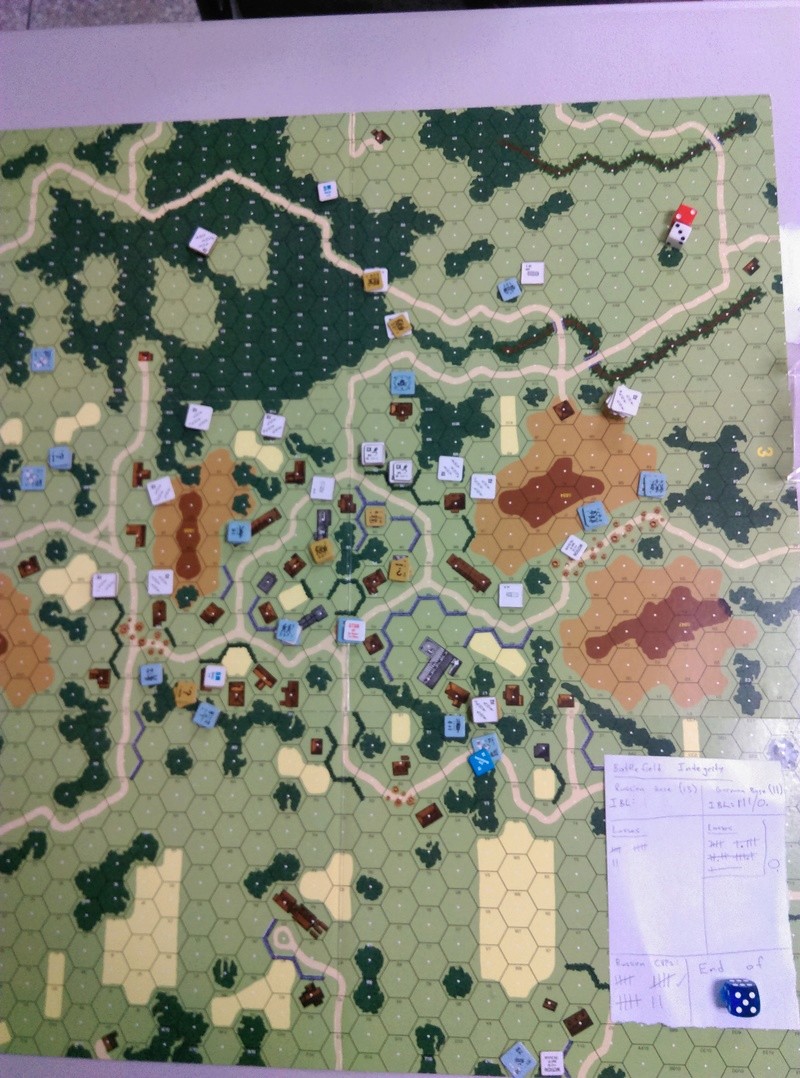 In turn 6, 2 Russian squads exit mounted (for 8 Exit VPs), while the Russians re-gather their horses, but remain on foot for the most part. The Germans are able to overtake them and begin to establish blocking positions with their advanced units, whilst the Russians stragglers are eliminated for FTR, forcing the Russians to take (and pass) their first BI check. 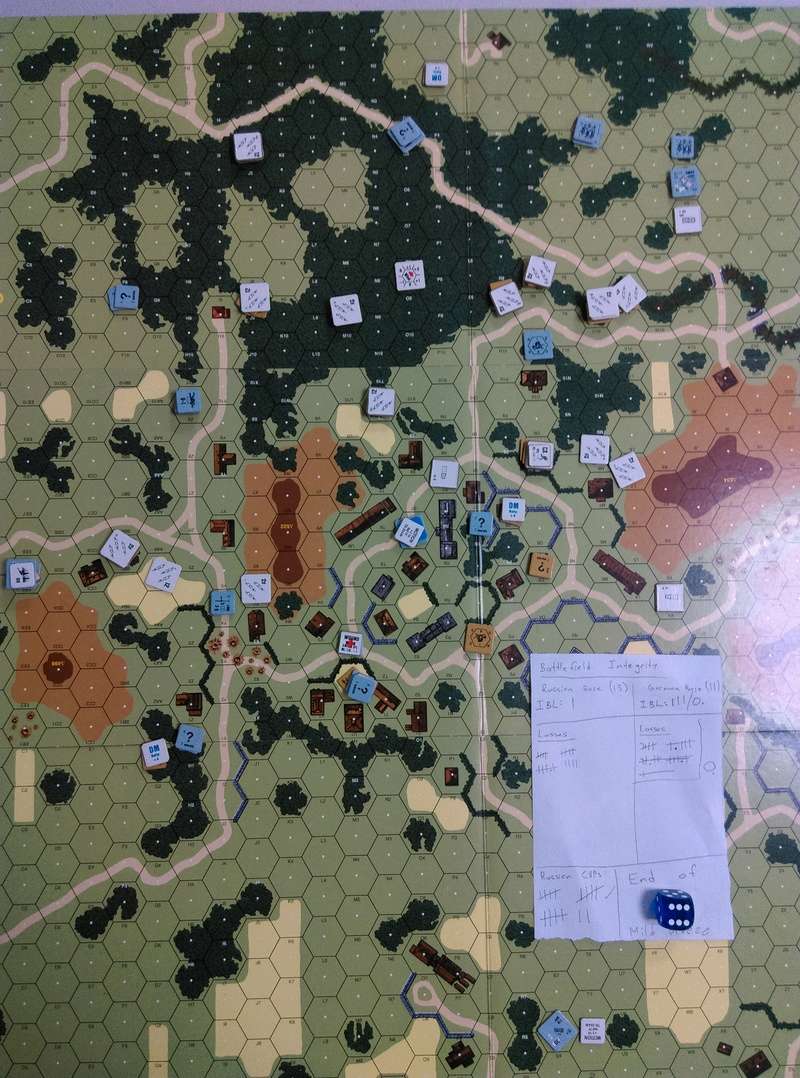 In turn 7, the Russians continue to move through the woods on foot as the Germans bring more units to interdict their exit. In all regards, a fairly quiet turn..... 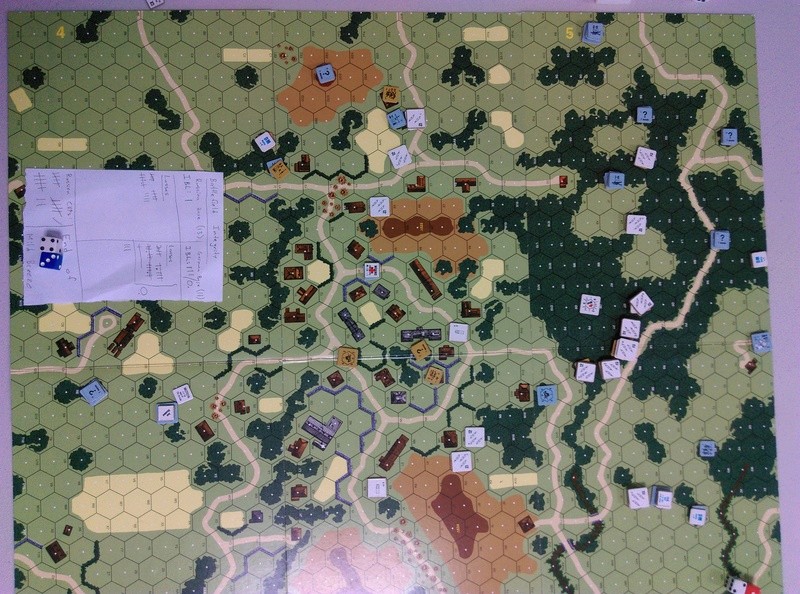 In turn 8, the Russians and Germans both prepare for the final Russian exit. It would be simple enough for the Russians to exit on foot, but they don't quite have enough to do that. One squad tries to race for the southwest corner, but is cut down by accurate German fire. Someone is still going to have to mount up. One German halftrack attempts to overrun some squads on the woods road, but make no impression on them. At least it is able to escape, and use ESB to stop in a useful position. 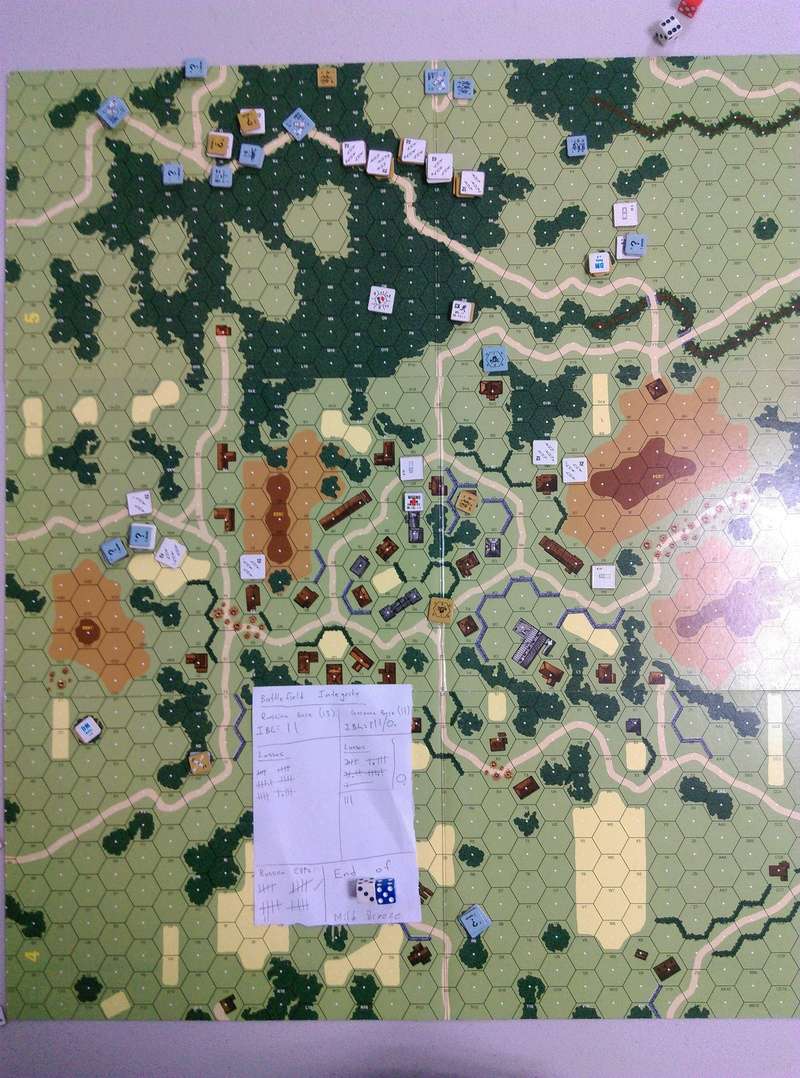 In the final turn, the Russians are forced to run the gauntlet. But the initial Russian squads are hit hard by accurate fire, and only one squad manages to escape on foot. But when a gap is spotted in the residual fire and remaining SFF opportunities, the Germans are powerless to prevent the 9-2, 9-1, and 2 527 squads exiting as cavalry, adding a further 18 Exit VPs (total 28), and Robin's Russians achieve the VCs. This was a great fun scenario to play, going all the way until the last turn. It was good to see Robin remaining patient (okay, I did give him a  few reminders) and not doing anything premature and reckless. Cavalry charges are simply too dangerous to contemplate in ASL, but the mobility that cavalry enjoy certainly offers them a place in the ASL environ.....