Last Sunday, Robin and I finished our game of ASL-004 "The Commissar's House". We played this scenario over consecutive Sundays (12/16 and 12/23) on an enlarged printed VASL map, with parallel actual maps to be used for LOS. I also constructed a level 1 and level 2 for the 20Z3 building, which tends to be the subject of some intensive stacking, and this contributed to a rather positive playing experience. Robin played the attacking Germans, whilst I played the defending Russians. German balance (which engineers the return of the first 3 DCs when used by a non-eliminated German unit) was in effect.

The German OoB is well suited to combat in the urban environment, 13 838 squads bring a lot of FP, and provide plentiful smoke for crossing the streets. They also have plentiful SWs for assaulting buildings, but will surely need them for breaking into the fortress that is 20Z3. However, the high Russian SAN (6), Booby Traps, and urban environment should lead to very high rate of attrition.

For my Russian setup, I assigned all 6 SWs (all MGs) to the 458 squads, and put ‘-1’ leaders with the HMG and MMGs. With so much smoke available to the Germans, its hard to see a lot of value coming from using the HIP squads in an ambush role, so instead, I used the HIP to hide the heavy weapons (in U5, Z4 level 2, and FF1 level 0) so as to deny information to the Germans. The trenches are a bit limited by not being able to set up in paved road hexes, so I placed 1 in cc6, and the rest formed a line in FF0, GG1, GG2, GG3, GG4. Combined with the HIP MMG team in FF1, I would be able to place a good Fire Lane (A9.22) down the FF2-Y6 road from GG2. I didn’t bother defending S6 at all, and to limit German setup (which cannot set up adjacent to Russian “?” counters), I had dummy stacks as far forward as possible. Robin set up the Germans as southward as he could. 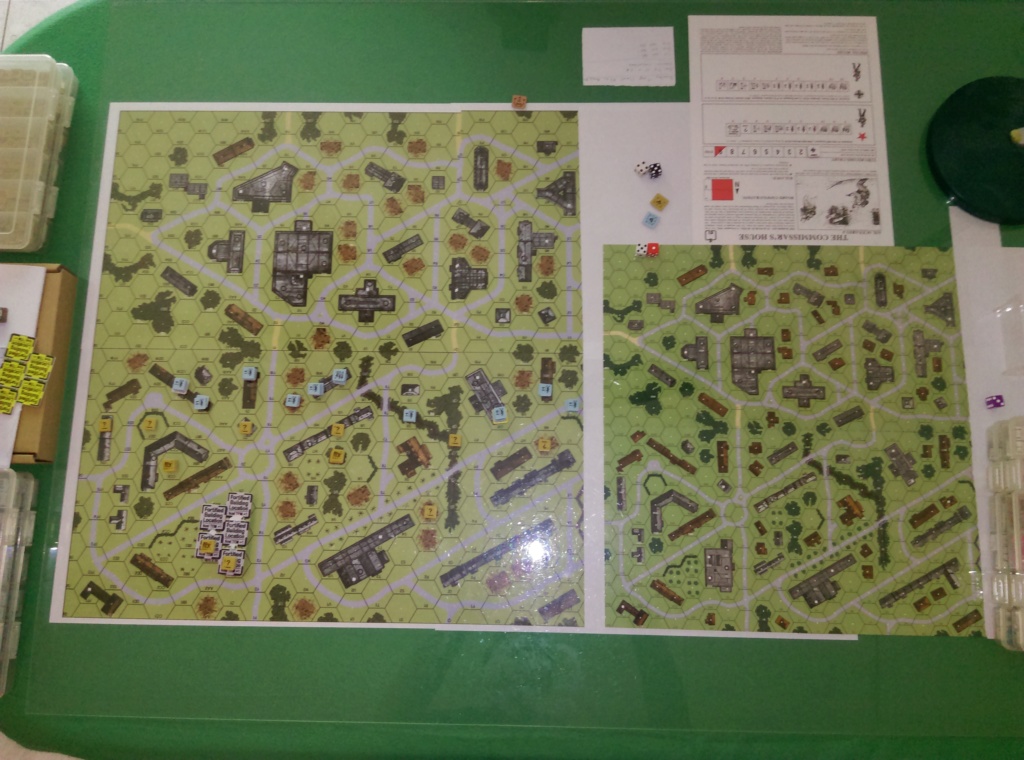 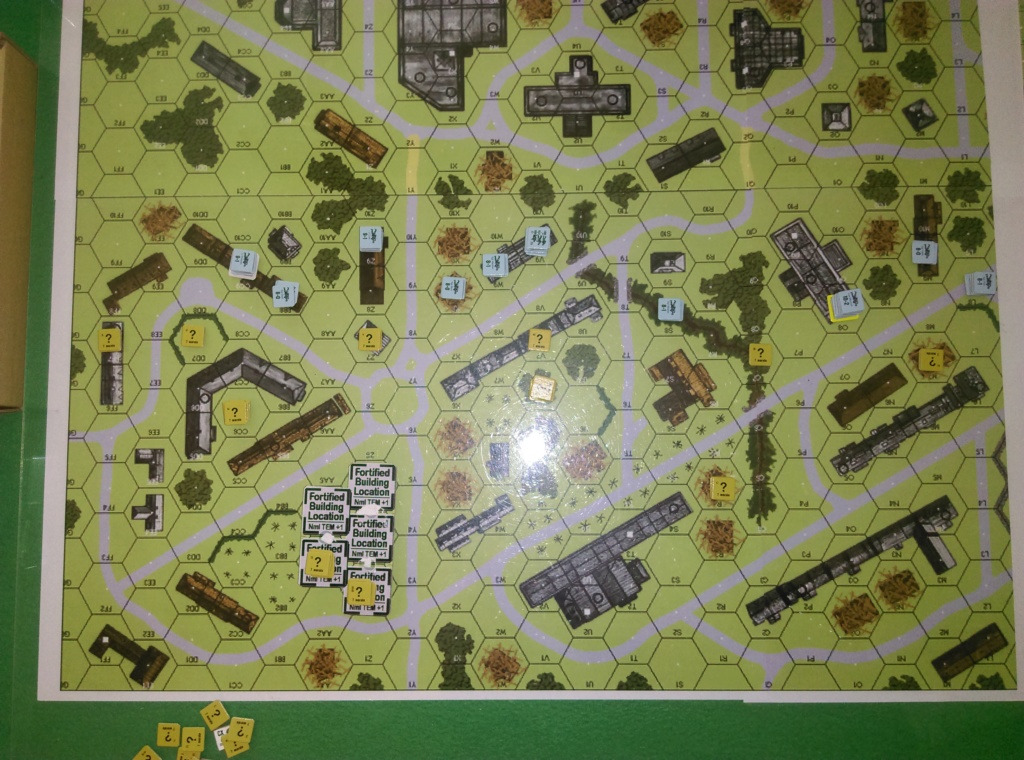 On turn 1, the Germans cleared out S6 and began to clear the outlying blocks en route to Z3. Despite trying to avoid casualties, I lose 3 447 squads, whilst Robin loses an 838. 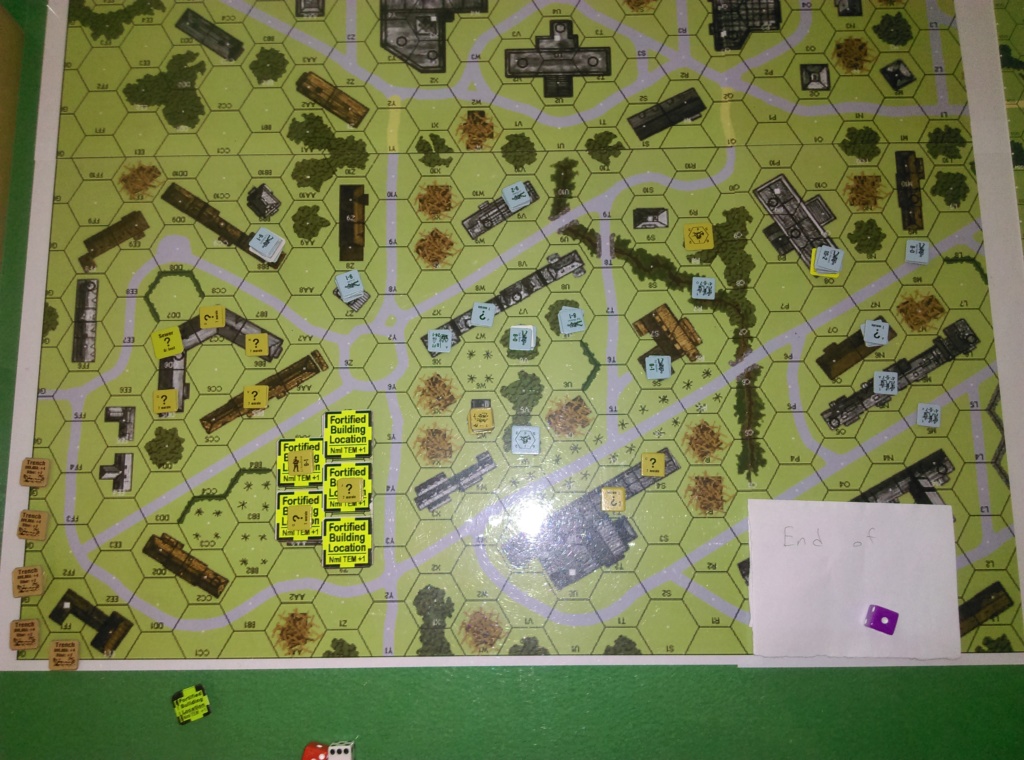 On turn 2, Robin continues pushing on to Z3. Both sides suffer a number of breaks, and by the end of turn 2, the Russian SAN has been reduced to 5, and there is a Blaze in S6. 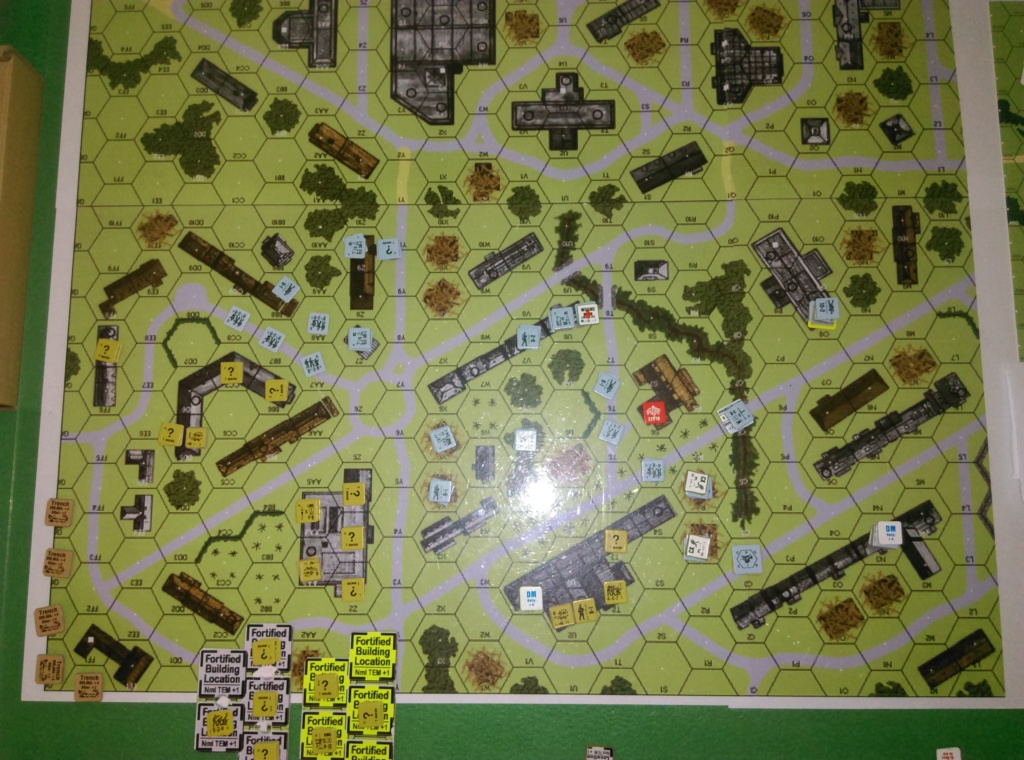 On turn 3, the drive for Z3 continues, with just a few Russians now resisting in the approaching blocks. Strangely, board 1 has never been in use !!! 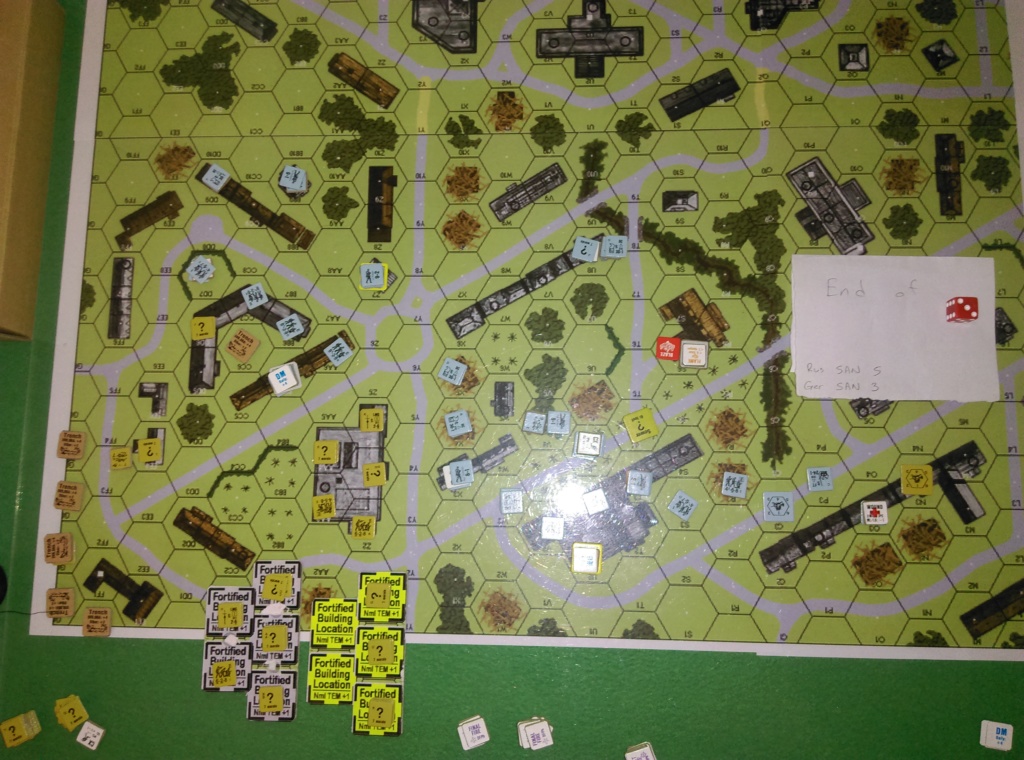 On turn 4, Robin pretty much clears out the approach blocks, and by the end of the turn he is ready to begin the assault on Z3. However, the German 9-2 leader, its 2 accompanying squads in Z7, and a Russian 458 squad in AA4 have gone Berserk !!! It is at this interesting point that we stopped play on 12/16. 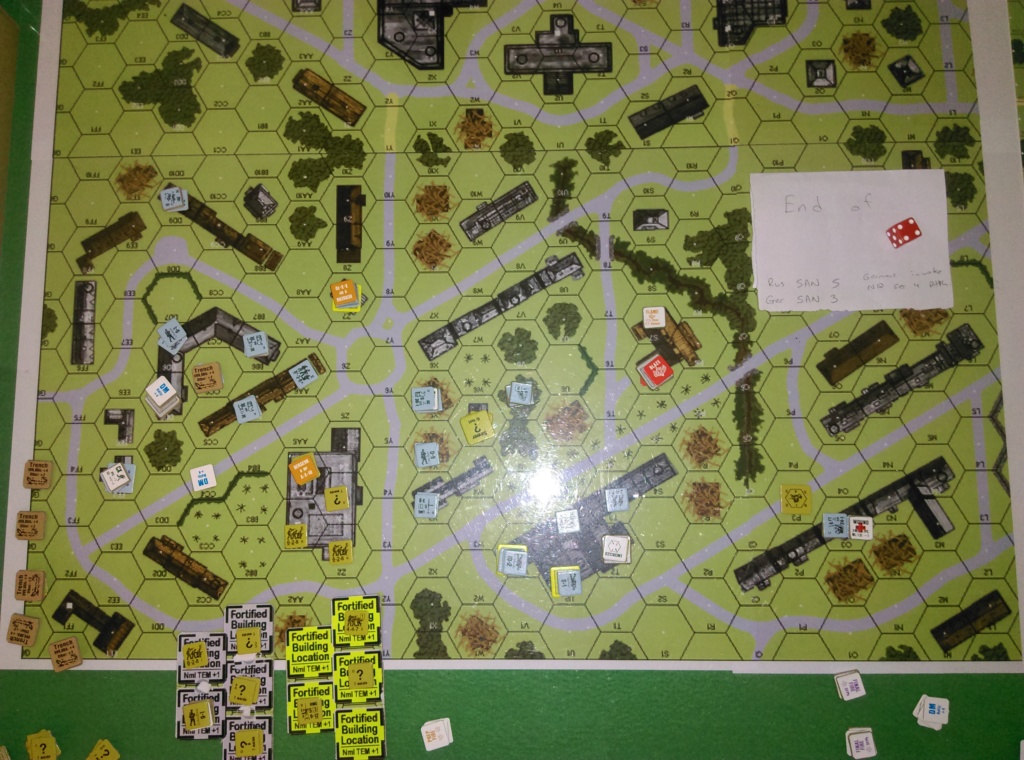 Resuming turn 5 on 12/23, the Berserk Germans charge the Berserk Russians !!! Although the 9-2 dies in the charge, 1.5 of the German squads are able to make it into AA4 (unfortunately, my Berserk squad is not considered GOOD ORDER, so does not prevent entry into a Fortified Building location), resulting in a Melee. The Germans also get a lone 838 squad into Z4, so they now have a toehold in the building. 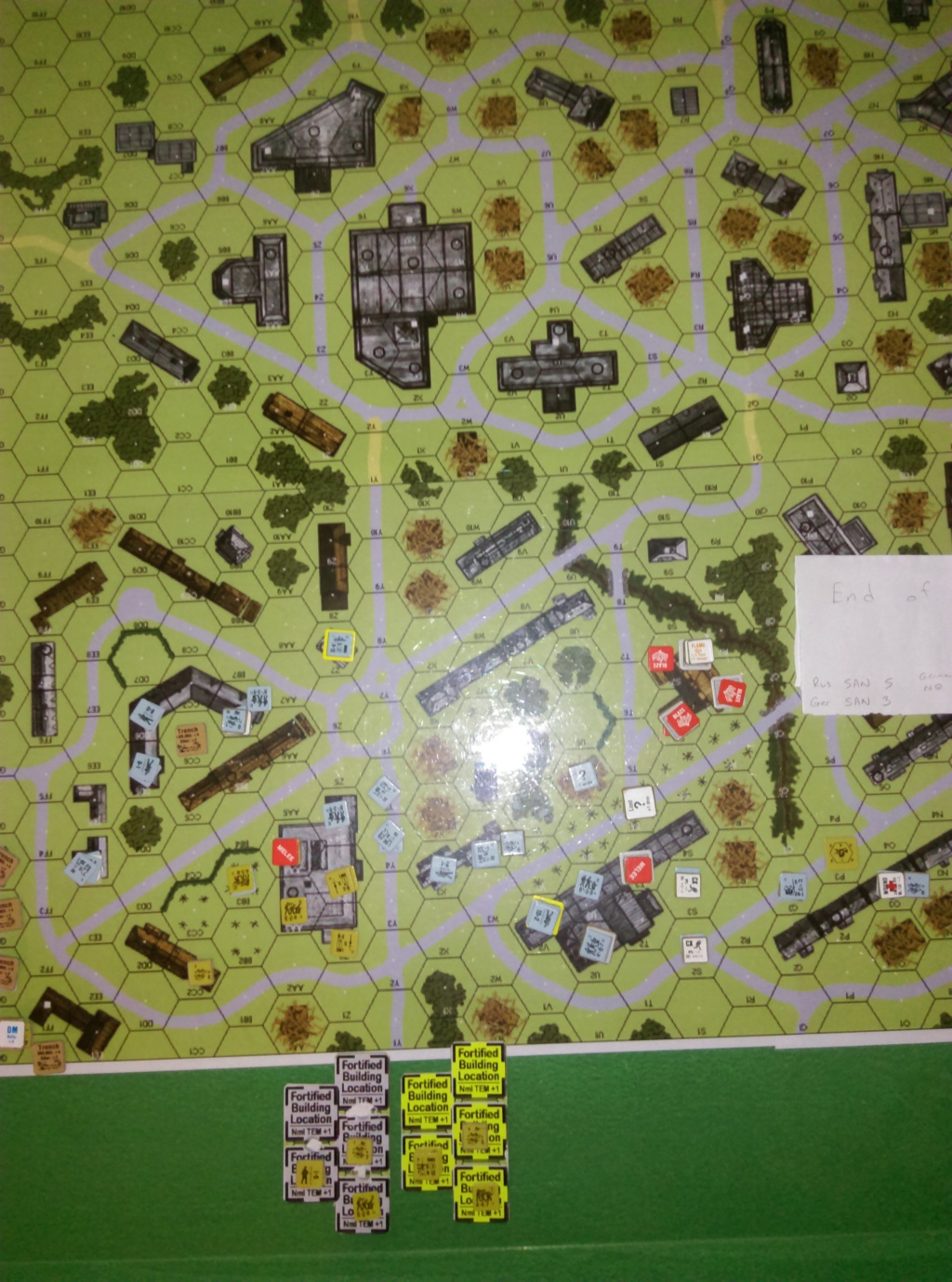 On turn 6, Robin continues to get more German squads into the Z3 building. He is using lots of smoke, and the arriving squads offer an advantage in FP that is forcing me out of the fortified locations one by 1. Buy the end of turn 6, I hold the ground levels of Z2 and AA3, and all of levels 1 and 2. 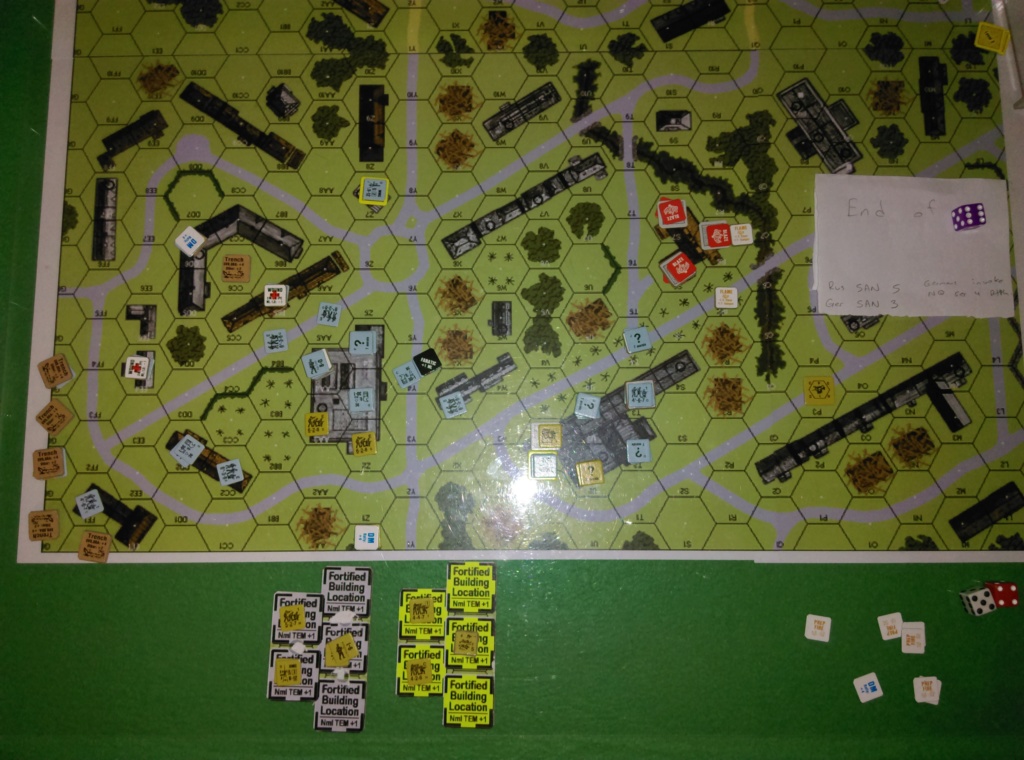 On turn 7, Robin is able to occupy the entire ground floor, which leaves my upstairs units Encircled (A7.72), but I still have enough units to block, and with only 1.5 turns to go, I am still optimistic that someone might hold out. 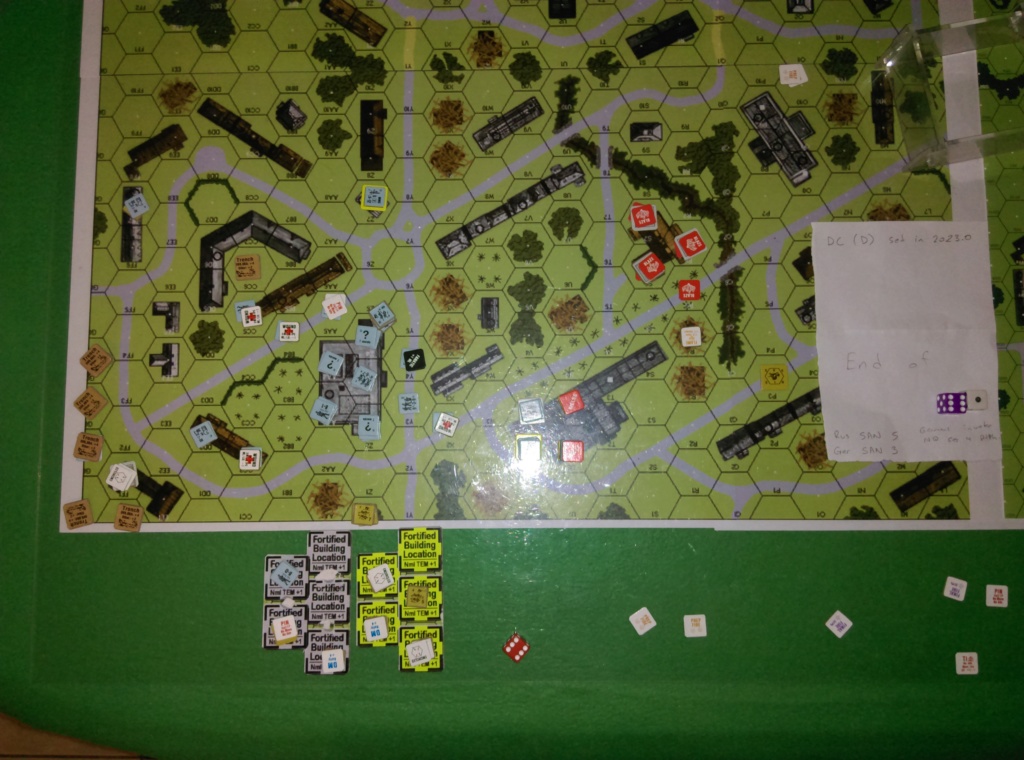 But in turn 8, Robin is able to smash me hard in the German PFPH, and even harder in the Russian DFPh, leaving me no good order squads, and no leaders at all by the end of it, meaning that (excluding a HOB result) Robin would automatically win. 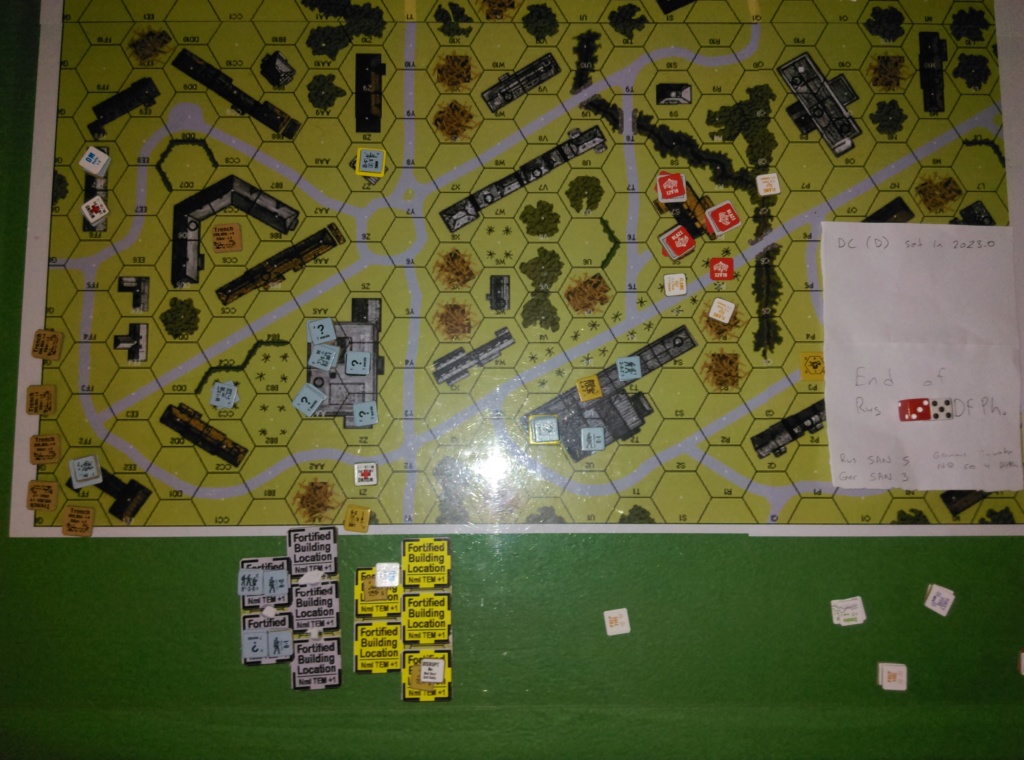 I certainly didn’t get the best of the dice in this game. The Booby Traps didn’t make a single attack, my SAN 6 wounded 3 leaders, whereas the German SAN 3 killed 2 of mine outright, and I ELRed 4 of my 6 628 squads, which had little impact in the game. The German FTs and DCs had a very minimal effect on the game, it was more the raw FP of the German squads that was the key in evicting the Russians.

However, it was a fun scenario to play, especially on the enlarged VASL map. I’ll be sure to use this map system for future FtF Beyond Valor scenarios.