Last Saturday afternoon, Little Wolf and I played J-185 “The Haunted Castle” at my home. Little Wolf played the defending Russian, whilst I played the attacking Germans. We played with Russian balance (which exchanges a MMG for a LMG with the starting Russian group.

At first glance, it seems like a fairly ordinary small infantry scenario, but there are a number of added spices, that make this quite a unique and enjoyable scenario:

I have played this once before as Russians, and with the benefit of some hot dice, had a not-so-difficult time of defending the buildings. In this game, Little Wolf set up his Russians HIP, and I set up my Germans concealed, since there was nobody about to deny concealment. I tried to give the 75 ART gun a LOS over the orchards to the level 2 locations of the CC6 (multi-level) building, in the hope of getting some Smoke to cover my turn 1 reinforcements. 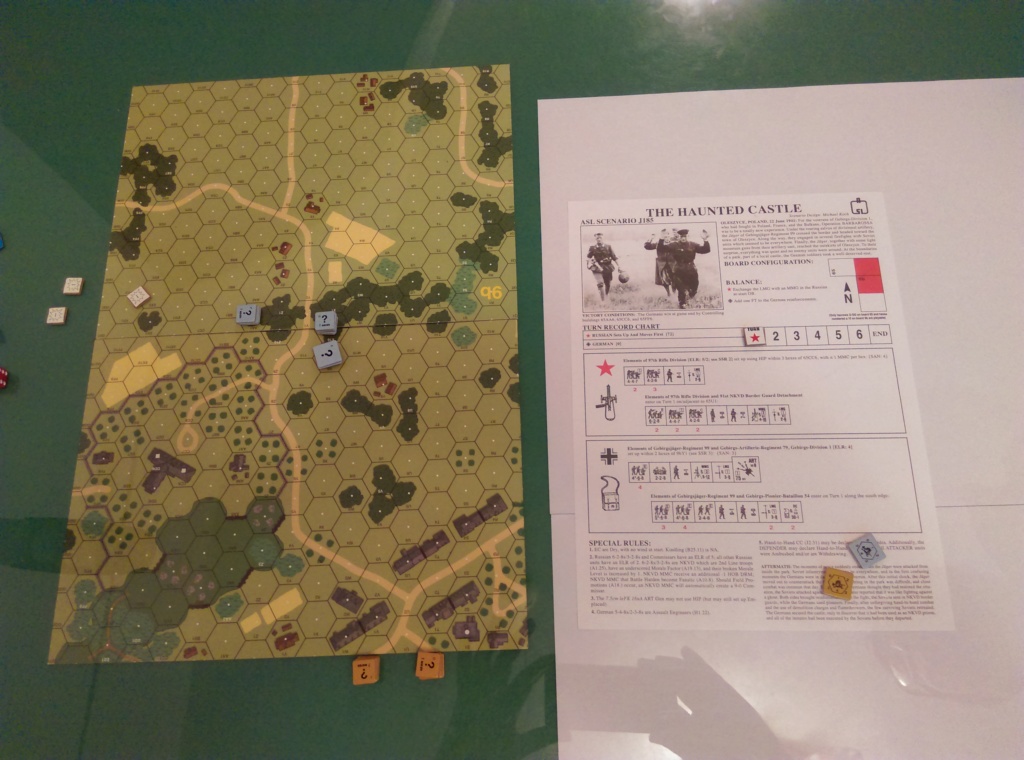 On turn 1, both sides moved cautiously, one squad at a time. The Russians out of fear of the 75 ART interdicting row X, and the Germans out of fear of the level 2 HIP MMG threat. I had tried for smoke but got none. ‘Plan B’ was to have the MG nest (8-1, MMG/468, LMG/468) and 75 ART Opp Fire, and hopefully intimidate the HIP MMG into remaining HIP. Interestingly, Little Wolf has not rushed everyone to the ‘castle’ (CC6). Instead, he has detached a small group, for attacking the gun perhaps? 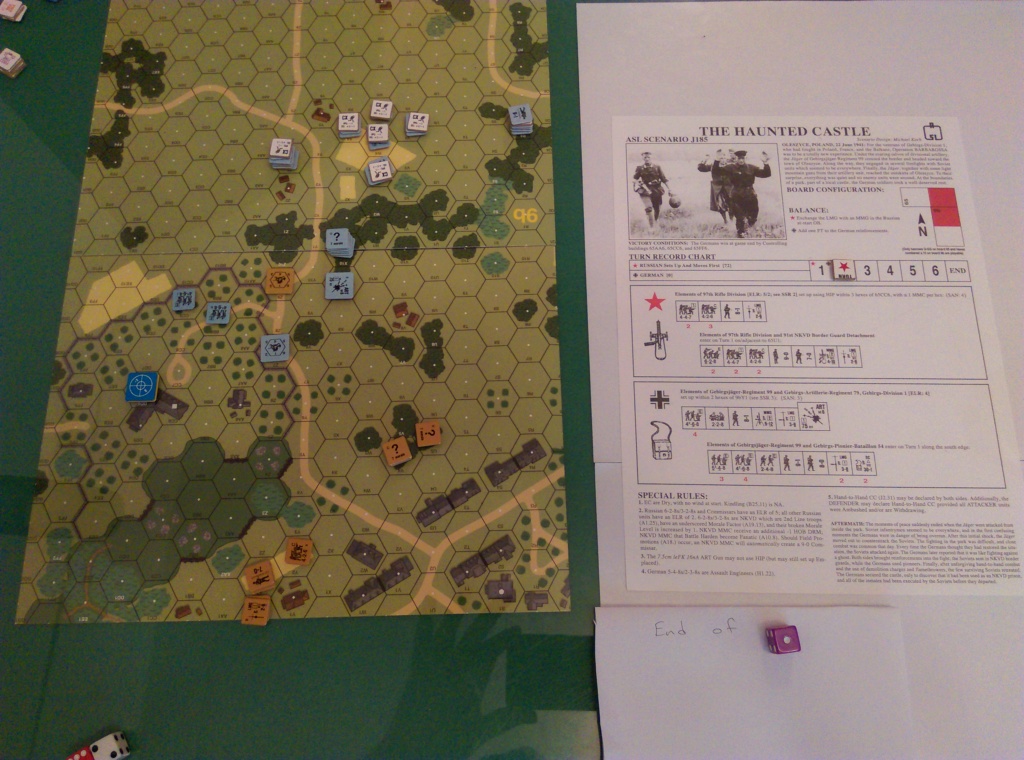 On turn 2, the German SAN kills the 9-0 Commissar, and I see that the concealed group approaching are the NKVD. The LLMC forces one squad to break, so it looks like whatever their attack was supposed to be has been well spoilt. My recon-by-fire has found the MMG in level 2 of DD6. However, the ‘regular’ Russian squads are a bit more resolute than the NKVD, and I am not managing to break many of them. 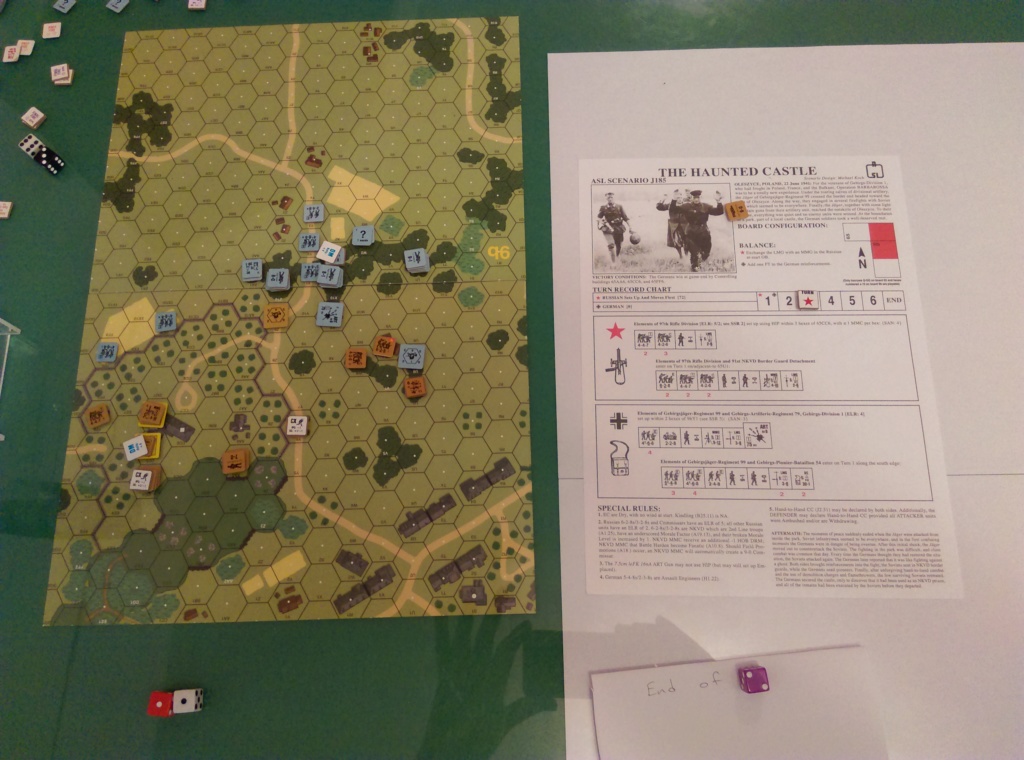 On turn 3, the remaining NKVD squad is able to break the gun crew, but them my MG nest breaks them. Little Wolf rushes in a leader to help, but he gets broken. My infantry use the cover of the wall to get adjacent to FF6. 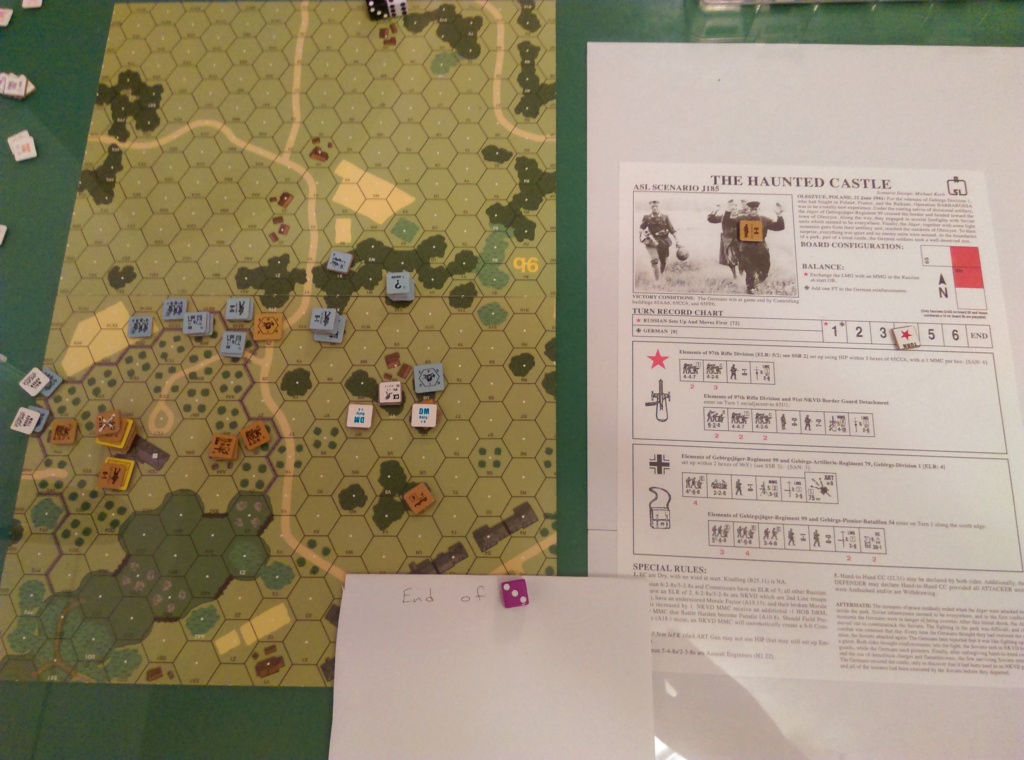 On turn 4, my MG nest gets broken by a low DR, but my remaining infantry continue to crawl towards the castle. But I suffer bad DRs on PTCs, and are kept out of all 3 VC buildings, with 2 turns to go. A lone German 248 half-squad chases and harasses the remaining broken rabble that are the NKVD. 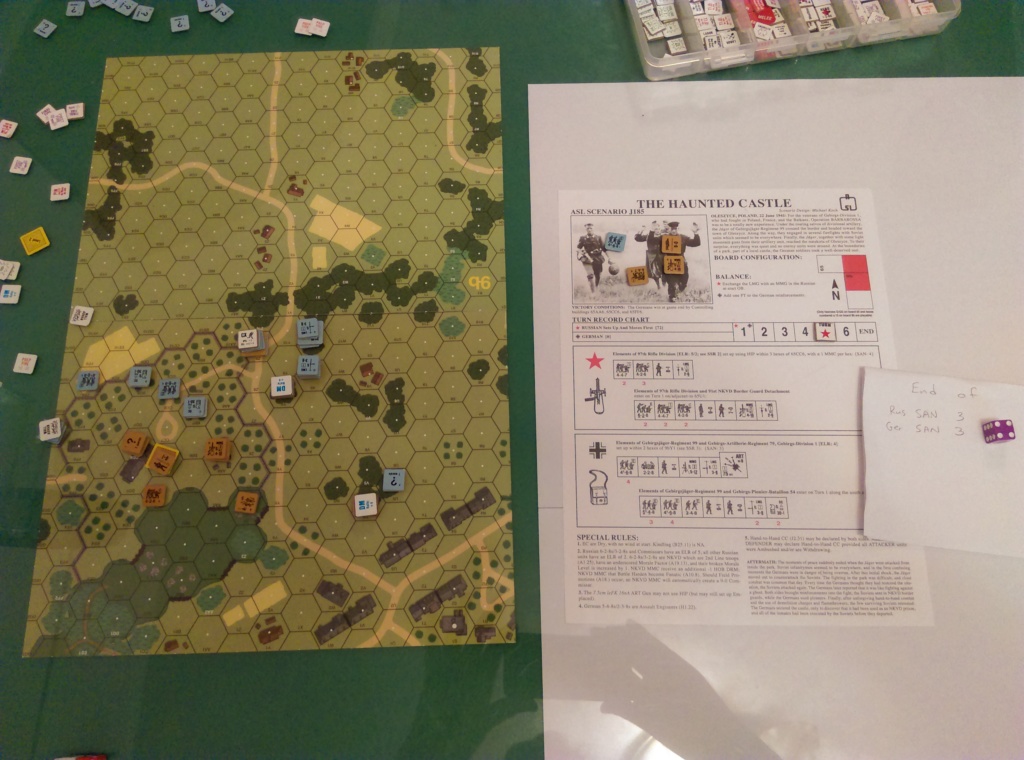 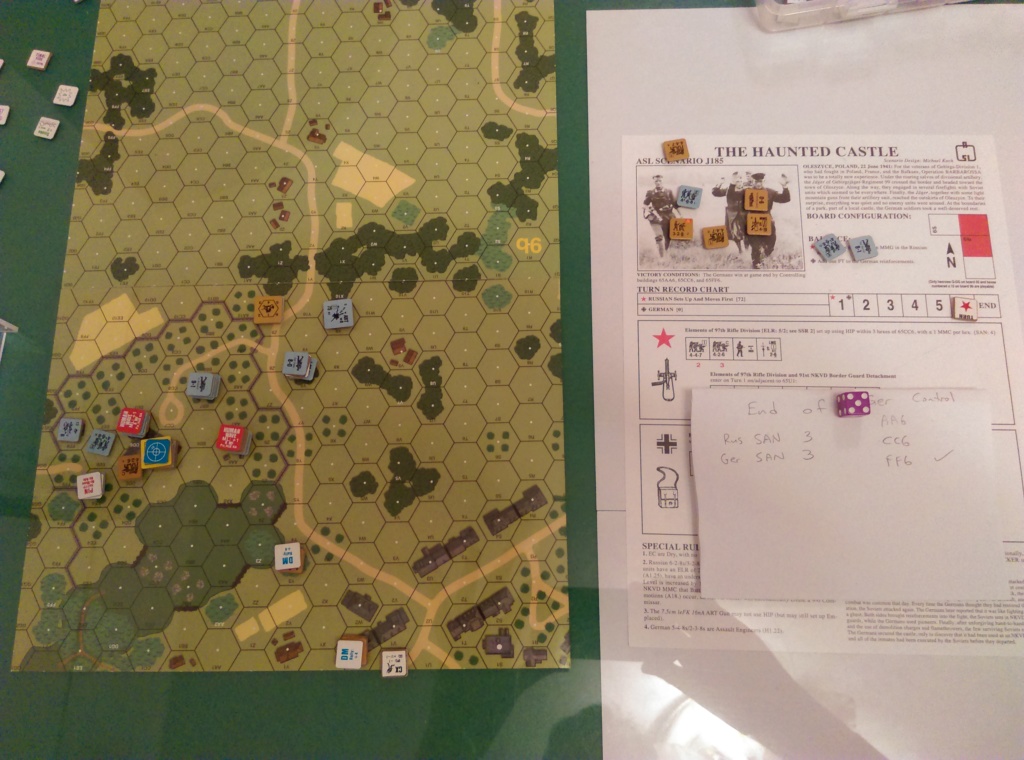 On turn 6, the CCs go a lot better for me, and leave me in position for a last desperate attempt to take the castle. At the start of German turn 6, I have both small buildings (AA6, FF6), but I still need to clear the Russians out of CC6. Little Wolf still has 1 HIP squad, which I don’t doubt is somewhere in the castle. In the PFPh, the Russian 8-1 leader suffers a 12 MC, failing also the wound dr. However the accompanying squad passes both the initial MC, and the LL1MC without a scratch (in fact, this squad lasted the whole game having never broken). I manage to get a squad into CC5.2, but no hidden squad there. Another squad gets to CC5.1, but still no hidden squad. However, after all know defenders have Final Fired, my 8-0 and his 548 squad then storms the building and gets bounced by the last HIP squad, a 426 in CC6. The 426 fired 8-2, then 4-2, with the only effect being the 8-0 Battle Hardening to a Heroic, 8-1. In the last CCPh, I need to clear out a 447 in CC6.1 and a 426 in CC6.0 (ground). I ambush and dispatch the 426, but roll too high to affect the 447, who has survived the game, held the castle, and won the game for the Russians. 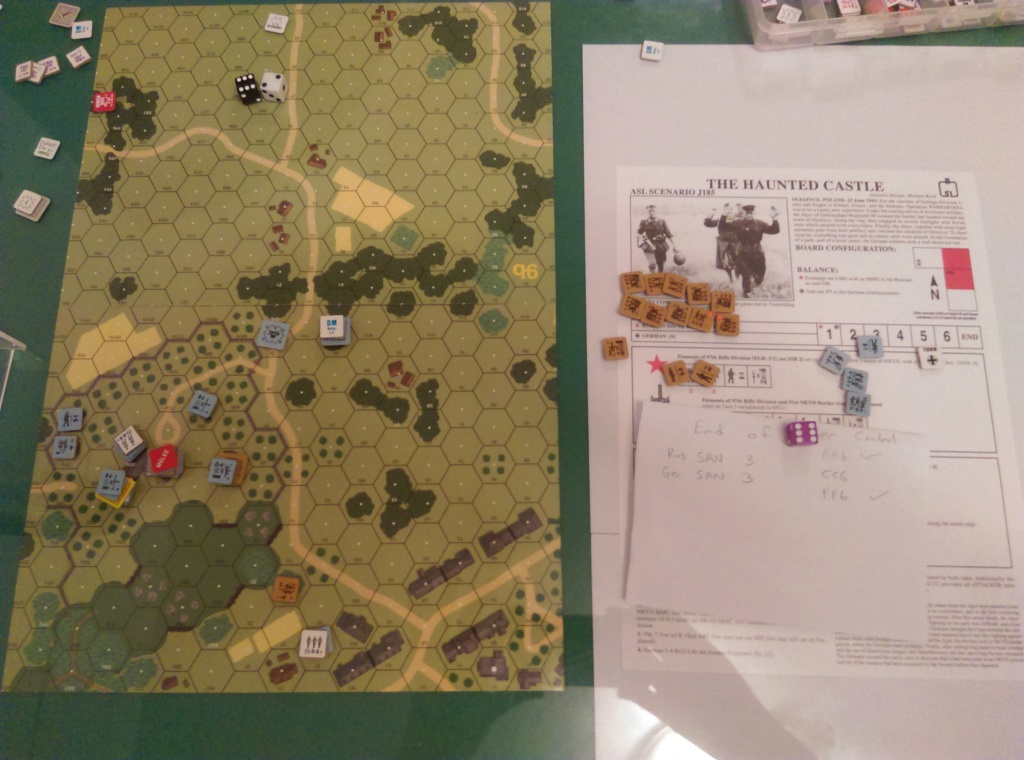 This is a great little scenario. I can see it becoming quite popular.