Last Sunday, we had our monthly ASL meeting at N.T.U. Five of us were present, KangYu, Little Wolf, Roy, Neo, and myself. I played Little Wolf yesterday as the Germans in J-185 “The Haunted House”, and had a feeling that someone might be eager to give it a try. I was right, Little Wolf played it again, this time as Germans vs Neo. KangYu had to leave early in the afternoon, and I noticed that Roy had a copy of Special Ops #7, which has an ASL article on pillboxes. So I suggested that KangYu and Roy play U-35 “Semper Paratus” (a (very) short scenario featuring pillboxes), which they did, with Roy defending as German, and KangYu attacking as British. 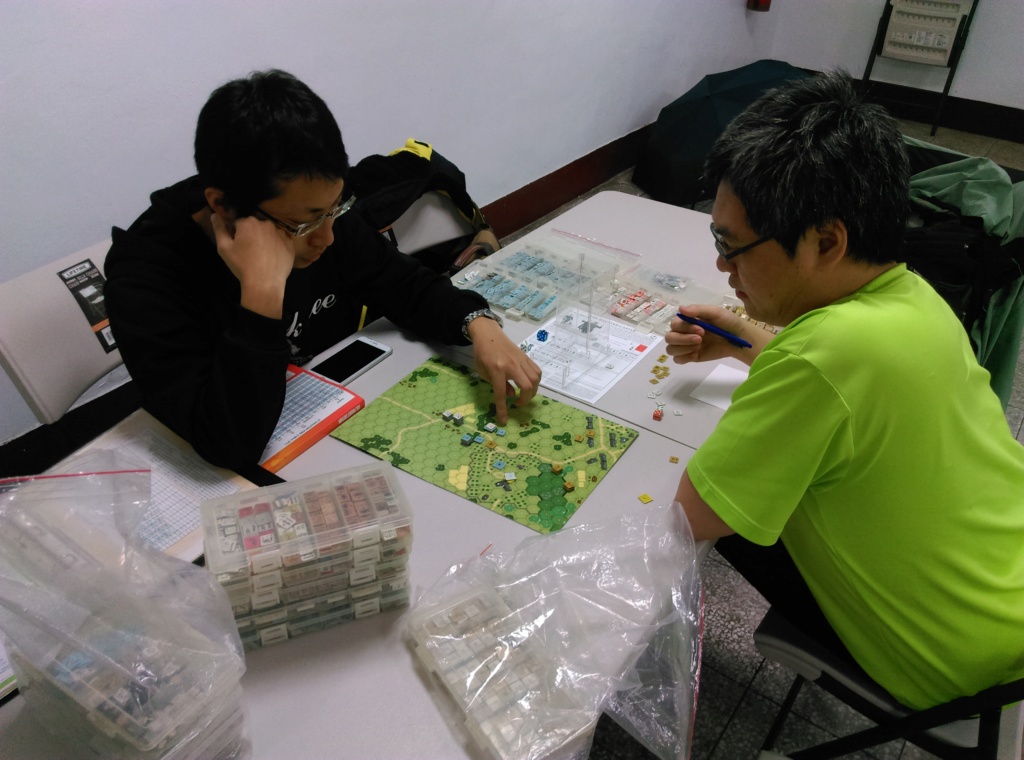 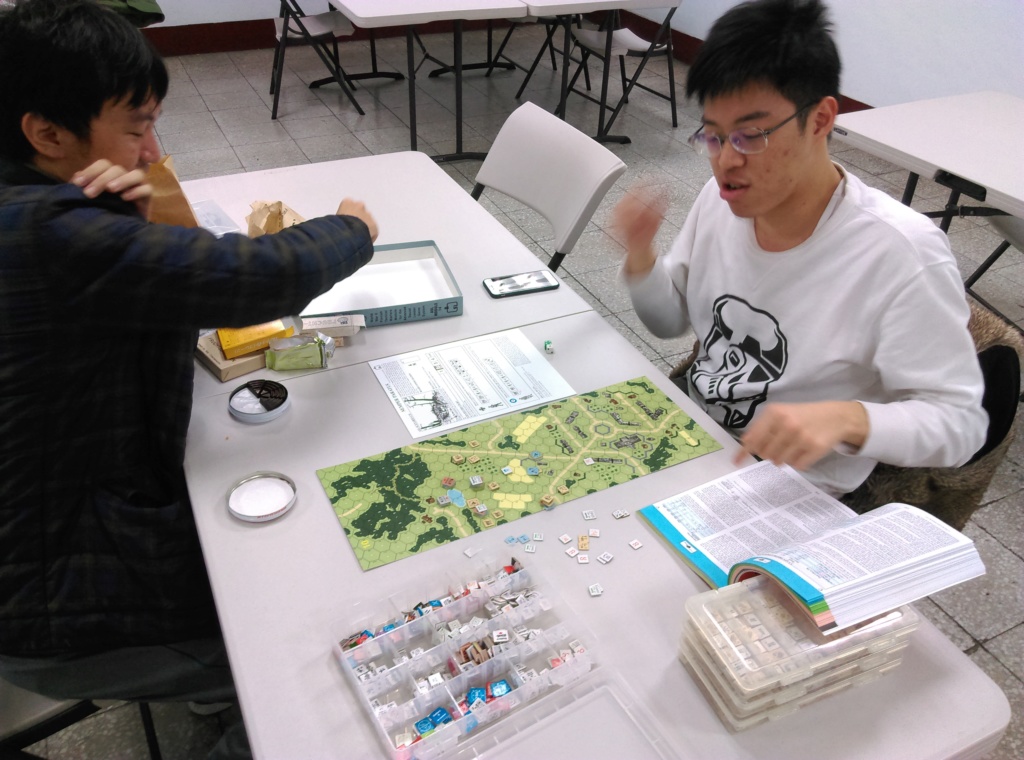 Meanwhile, I spent the morning helping the guys out with rules (and meanwhile took a read myself of the pillbox article), and also set up another pillbox scenario to play Roy at later. The scenario chosen was ASL-049 “Piercing The Peel”. I’ve played this scenario 3 times in it’s original format (which didn’t have the wire), but that was some time back…..this scenario is actually older than the guy that I’m playing it against !!!

This scenario depicts an assault on a fortified point defense. The Germans attack with 16 467 squads, 4 leaders, and 9 SWs (including 2 FTs). The Dutch (Allied Minor) defend with 10 457 squads, 2 leaders, and 3 SWs. The Dutch also get 3 135 pillboxes, 6 trench and 8 wire counters. The Germans win after 7 turns by controlling 2+ pillboxes.

The Dutch fortifications are somewhat restricted by the fact that historically, the Dutch got attacked from behind, so by SSR 3, all pillboxes must face southeast (the German attack is from the north). Also, the 3 SWs (all MGs) must begin in pillboxes, meaning that very little will be able to fire upon the Germans in their initial turn. Also, no fortifications may set up HIP, so there isn’t much scope for misdirection. However, the boards are fairly open, so its still possible to create an effective redoubt.

The key point with pillboxes is that they form a separate location (B30.1), and in order to control a pillbox (or even the hex that the pillbox is in) a GO MMC has to enter that location (B30.91) in order to control it. Broken units can remain in pillboxes without being forced to rout (as per B30.5), so even if you can break units in a pillbox in the last turn, as long as they can survive through to the APh, that’s good enough to deny enemy control, as the enemy can only enter the pillbox when it is unoccupied (as per B30.4), save for a lucky CC Infiltration (A11.22) result.

The Germans have 2 FTs, but to reflect their unfamiliarity, they are 2 PP. This is significant, since the Germans have no elite MMCs, so in order to avoid the non-qualified penalties, the FTs have to be used by leaders, which further complicates rallying, fire direction, mobility, etc.

In our game, I set up 2 pillboxes connected by a 5 hex long trench in the center of the map, and one pillbox and connecting trench to the east. All the wire formed a north perimeter around the group of 2 pillboxes and trenches. I think you should just about always connect trenches to pillboxes (when available) to form Bunkers (B30.8 ), as that greatly enhances accessibility, and in this case with pillboxes facing the wrong way, I have a hiding place that is immune to IFT fire. The drill will be to have the MGs advance out (as in during the APh) to the adjacent trench during the German turn, and in the Dutch turn, the MGs can simply move into the bunkers to be immune to IFT. When it gets a bit too hot to continue the routine, one squad will man the pillbox, whilst the other defends for as long as it can. The goal is to simply slow the Germans down. Time is on the side of the Dutch !!! 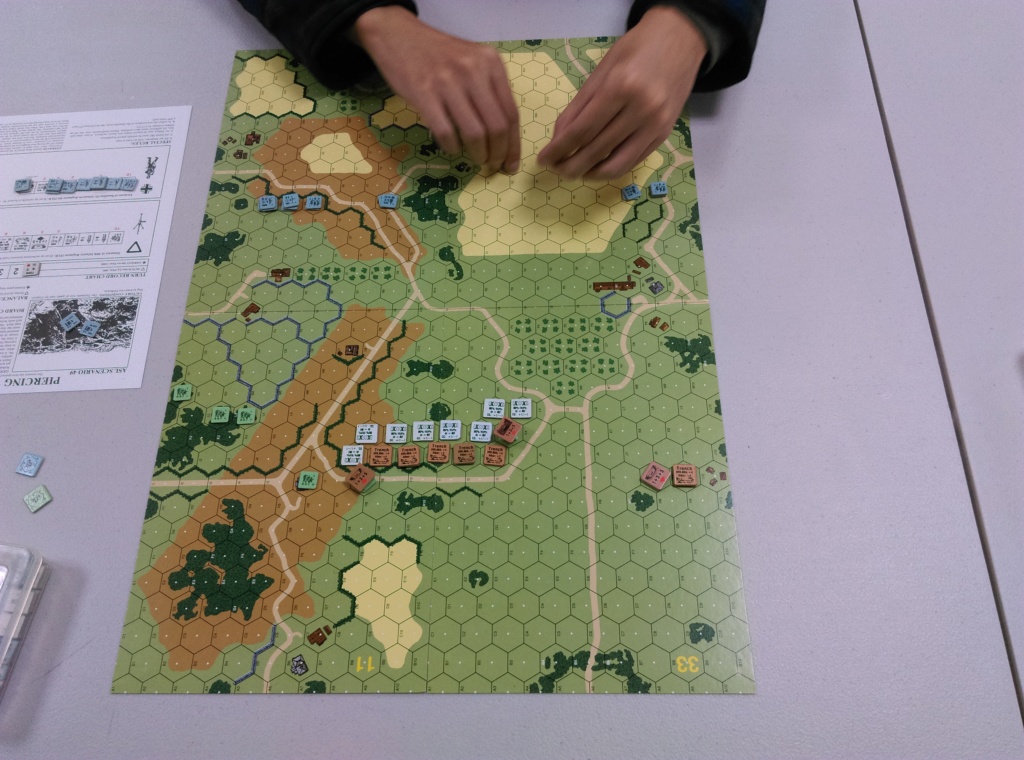 On turn 1, the Germans simply advanced forward as fast as they could. I had defended as far back as I could, and since the Germans start on/north of row W, they had a way to go before they could fight the Dutch. 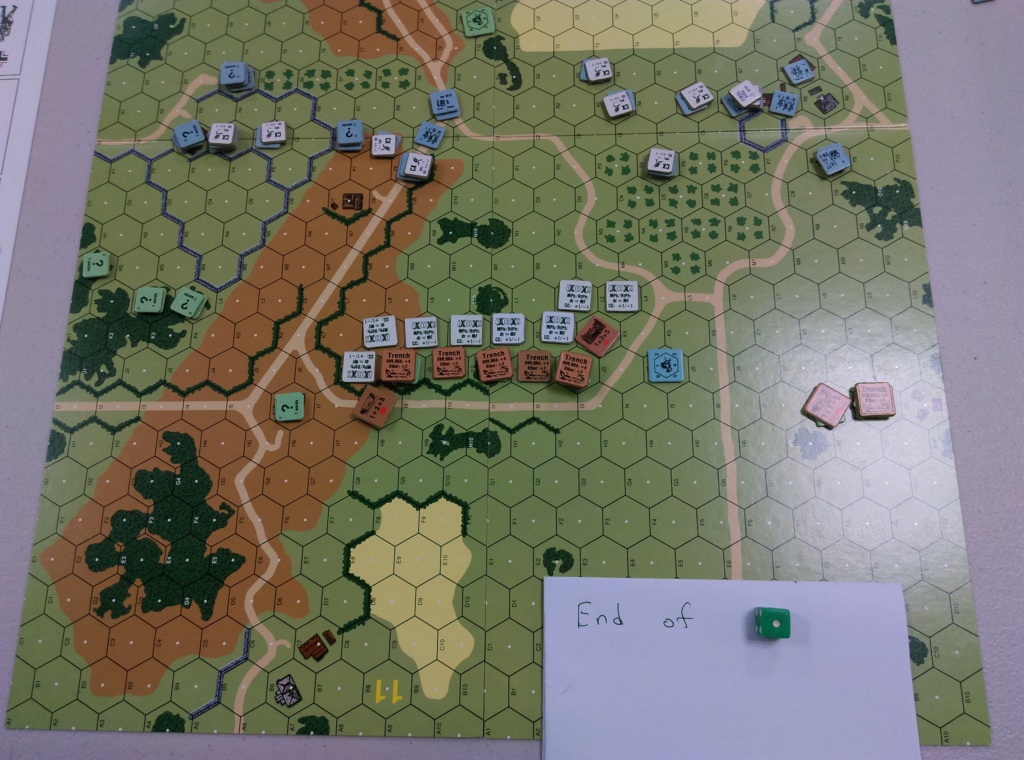 On turn 2, the Germans found it hard to find cover to shelter their advance, and my MGs were able to break a number of German units. 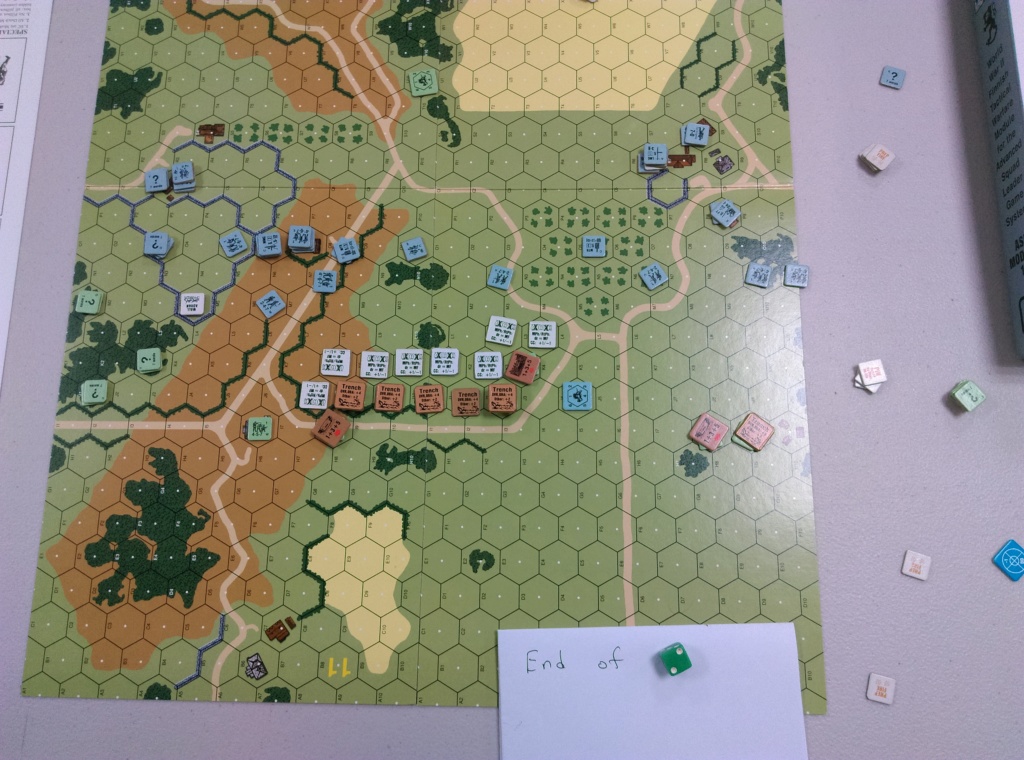 On turn 3, its rinse and repeat, although one Dutch squad pins in 11J8, which means it cannot advance into the I8 pillbox. Instead, the HMG will need to advance directly out of the pillbox into I8. At least if they break, they can rout into the pillbox. A Dutch squad on the east side breaks, meaning that the other will need to man the pillbox. 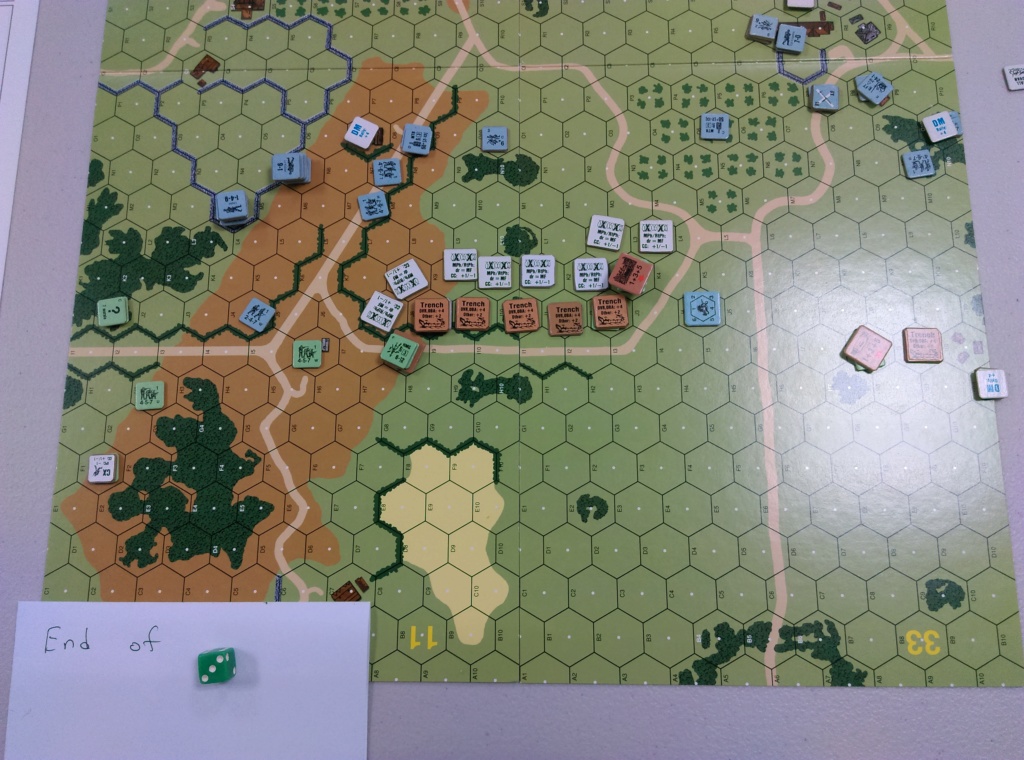 On turn 4, my HMG squad in 11I8 breaks. The 7-0 leader is in the pillbox, broken, but not DM, so if I can get him back, I might have a half decent shot at rallying the squad, once DM is removed. Meanwhile, a very brave 8-0 leader with a FT tries unsuccessfully to get under the wire. He draws a lot of fire, but is unbroken for now, and can put some meaningful fire onto 33J2, which connects to the 33K3 pillbox. I will need to get rid of that pesky and dangerous nuisance !!! But in my turn, my 7-0 leader in the 11I8 pillbox rolls a 12 on its SR, and fails the wound, leaving my squads alone. None of my Prep fire make any impression on the FT in the wire, and now 11I8 and 33K3 look a little vulnerable. But there is not too much time left, and the German squads are yet to cross the wire. 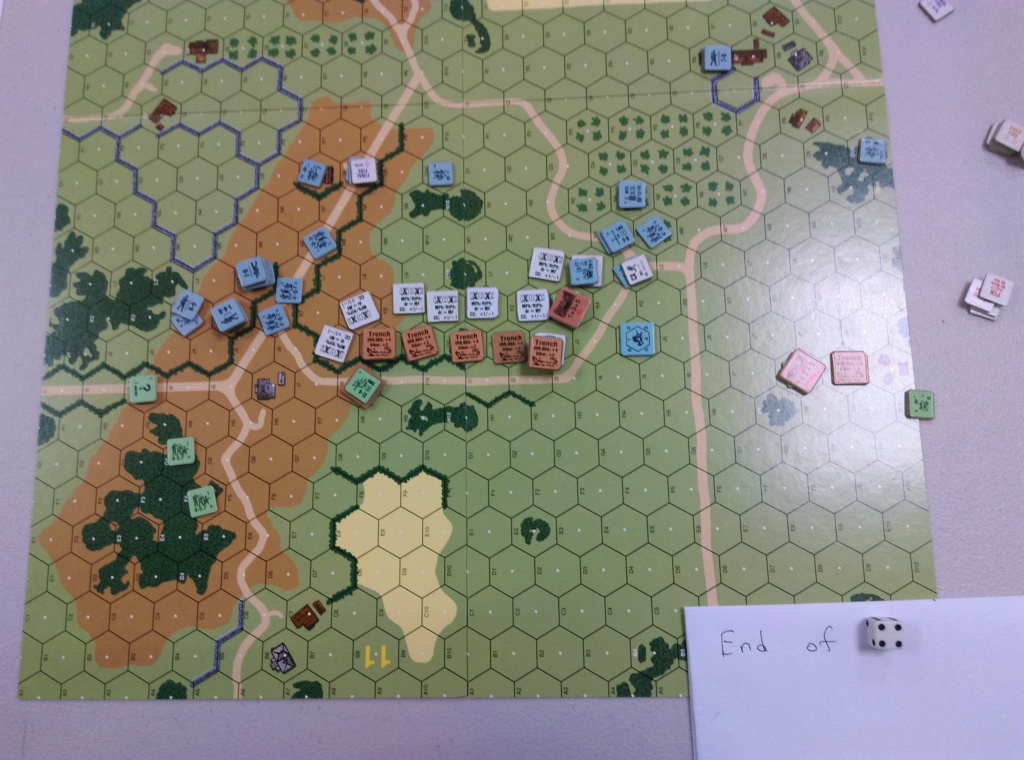 On turn 5, the pesky leader with the FT continues to survive, even though his FT isn’t really having much effect on anyone. However, a 50mm mtr gets a Critical Hit (C3.7) on the 33J2 trench, killing the 8-1 and breaking the other units in the hex. Meanwhile, a number of German squads try to cross the wire, but without any success. In the APh of my turn 5, I leave 1 MMG/237 in the 33K3 pillbox, and 1 MMG/237 in the connecting J2 trench. 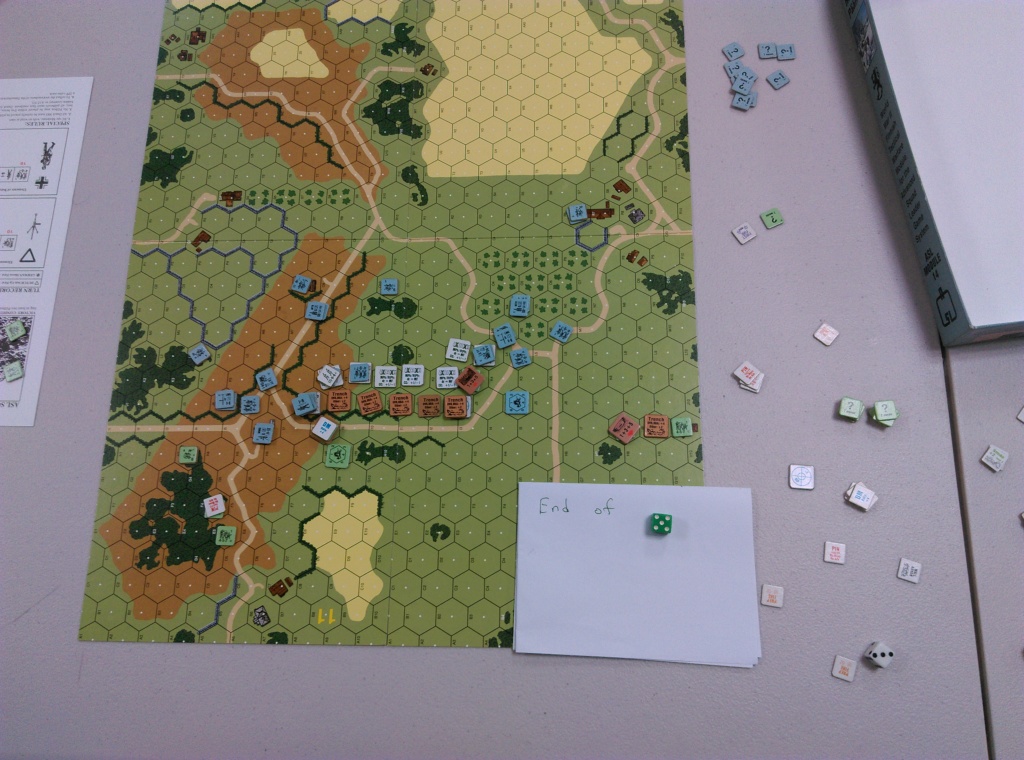 On turn 6, the FT/8-0 in 33L3 is able to get beneath the wire, but most squads are still getting caught on it. The Germans manage to pacify the region around the 11I8 pillbox, but my half-squad in the 33K3 pillbox holds on for now.

(unfortunately, I forgot to take a photo at the end of turn 6)

In turn 7, the FT/8-0 are able to break the half-squad in the 33K3 pillbox, and a number of German squads have gotten under the wire and into the connecting 33J2 trench. German squads enter and control 11I8 in the turn 7 MPh, and in the AFPh of turn 7, the (until-now-silent) other FT/8-0 team manages to eliminate the above-mentioned broken half-squad, allowing APh entry into the 33K3 pillbox and victory to Roy’s Germans. 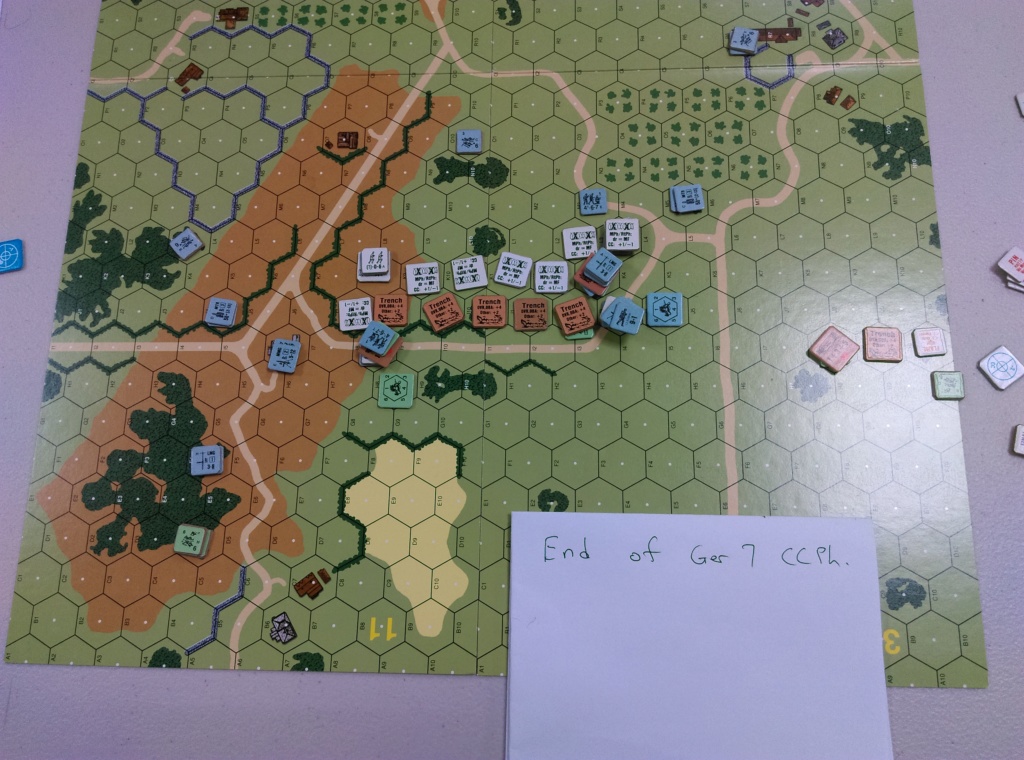 It was a good close game in the end. For the first 4 turns, the Dutch held well, but a couple of unfortunate events and some successful aggressiveness from the Germans were able to come through right at the end. Most importantly of all, the experiences of today’s scenarios (remember that Roy played U-35 earlier) will make reading the Special Ops #7 pillbox article a very informative experience for Roy.

I’ve got to say that I feel quite blessed these days. A few years ago, I hardly played any FtF ASL at all, but these days playing FtF is quite a regular fixture for me.