The Russians really don’t enjoy a great numerical superiority (20 squads vs 16, if one considers a gun and its crew to be the equivalent of a squad), but the Germans are obliged to defend a broad front, meaning that the Russians will initially begin with a local superiority. The 4 supporting tanks have a good gun, and are very mobile with 16 MPs. Along with the 9-1 armor leader, all 4 are worth exactly 30 Exit VPs (providing all 4 MA are functioning), which mean they can potentially win the scenario by exiting all 4 AFVs. The 80mm OBA isn’t decisive versus buildings, and the urban environment makes artillery observation difficult, but the ability to use smoke is a most useful resource for the Russians. The German has the burden of defending 2 (admittedly challenging objectives), but having 6 leaders gives the German a lot of flexibility. 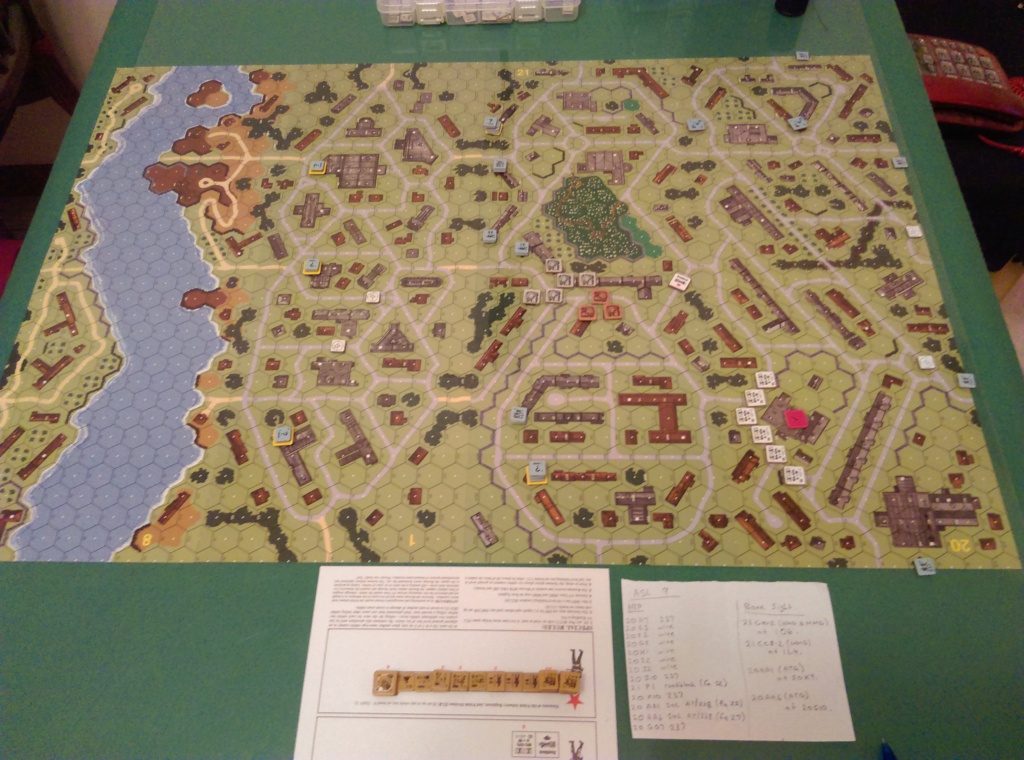 I put the wire in front of the 20H3 building, the guns defended exit routes, the 2 HIP squad-equivalents were deployed into 4 HS and placed near exit areas and deep on each board edge, MG nests were placed at level 2 on board 21, and the rest of the infantry were set up in reserve platoons along the east edge of board 21. I rubbled the center area of board 21 to make it both difficult for tank movement, and also to create a killing ground. Only dummies were placed on board 1 (to deny concealment growth, if nothing else). My greatest fear was getting engulfed early. I quite contently sacrificed territory to avoid having this happen. We played this scenario with Russian balance in effect (extends the game to 11 turns). 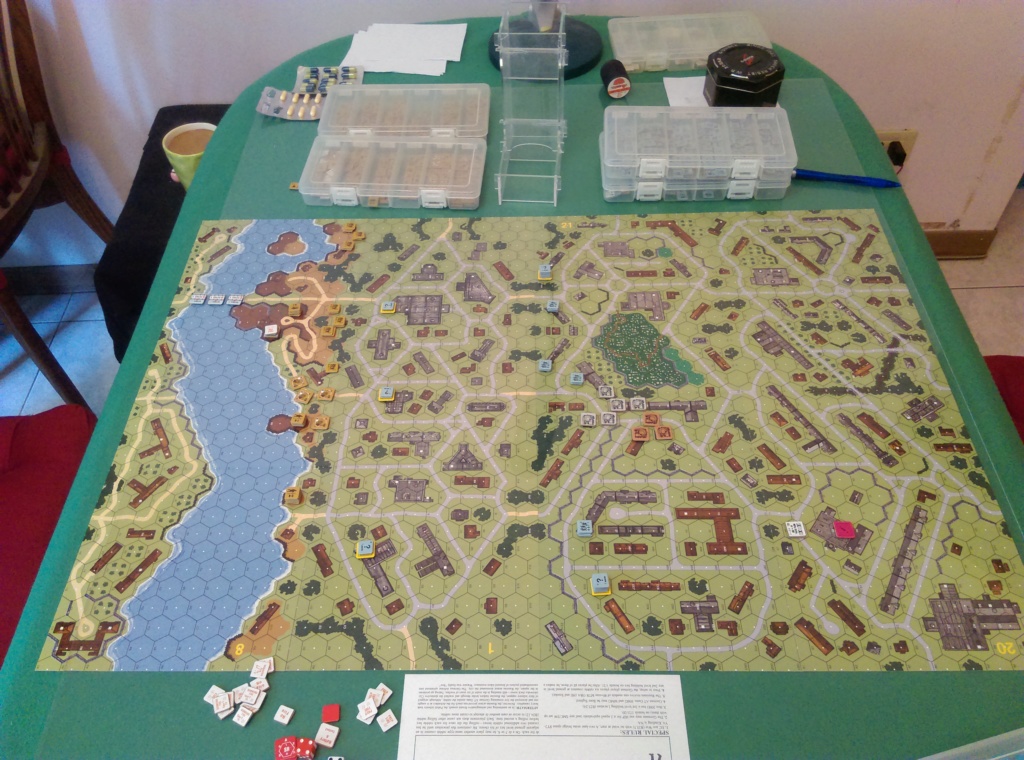 On turn 1, the Russians advance cautiously but safely. The smoke seen was placed by the T-34/85s. An initial red Battery Access chit delays the placement of a SR. Having gained concealment, my reserve platoons advance into contact positions. 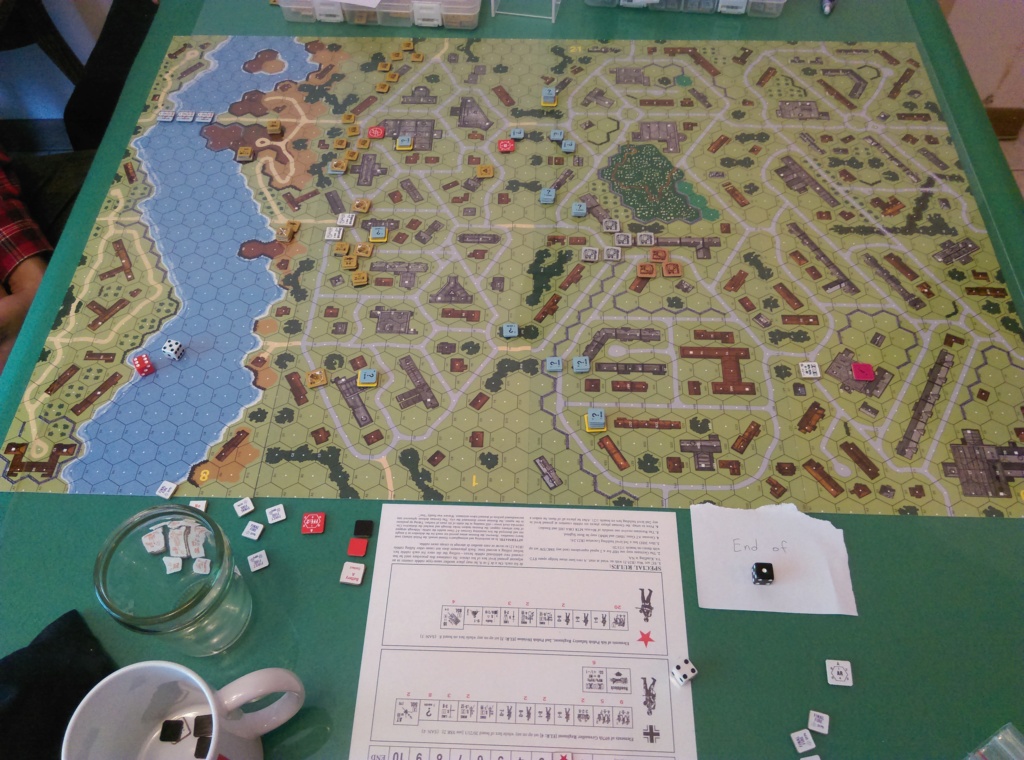 On turn 2, the Russians continue to push cautiously through board 1. My cordon pretty much holds for a turn, and is reinforced by my MG nests. 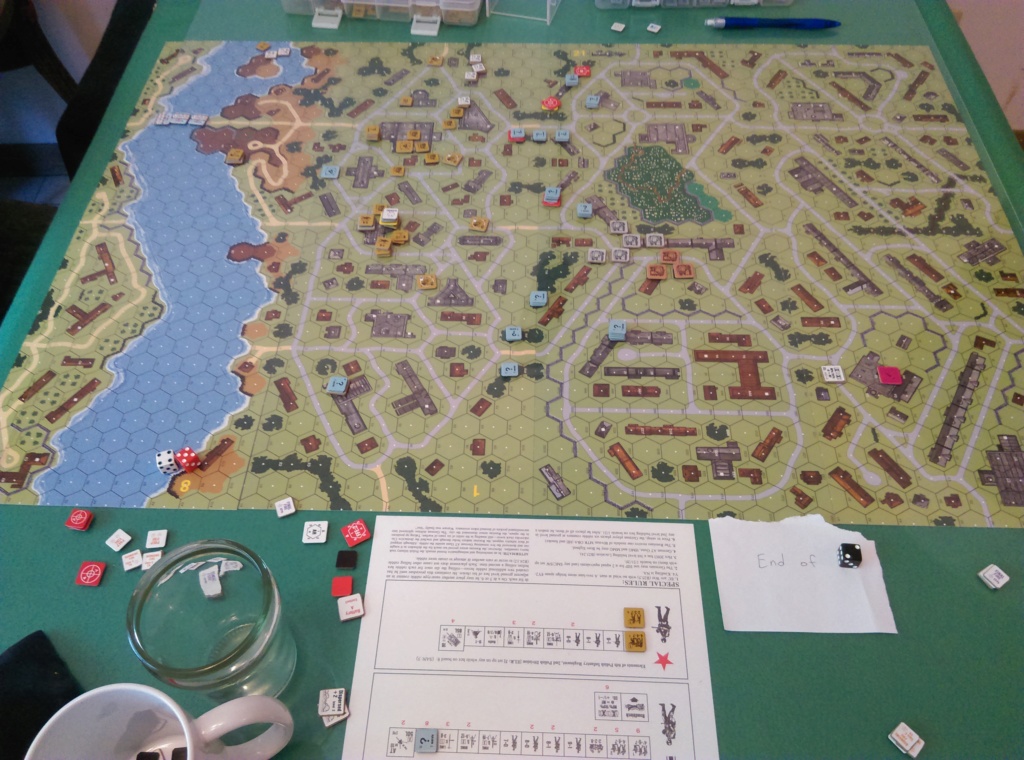 On turn 3, the Russian OBA drops a smoke FFE in the southeast corner of board 21, and threaten to overrun my Germans there. But in the German RPH, the WCDR is ‘Gusts’, which depletes the smoke then, and once again in the German AFPh, barely long enough for my forces to pull back. The Russians have lost 2.5 squads, the Germans have lost 1 squad. 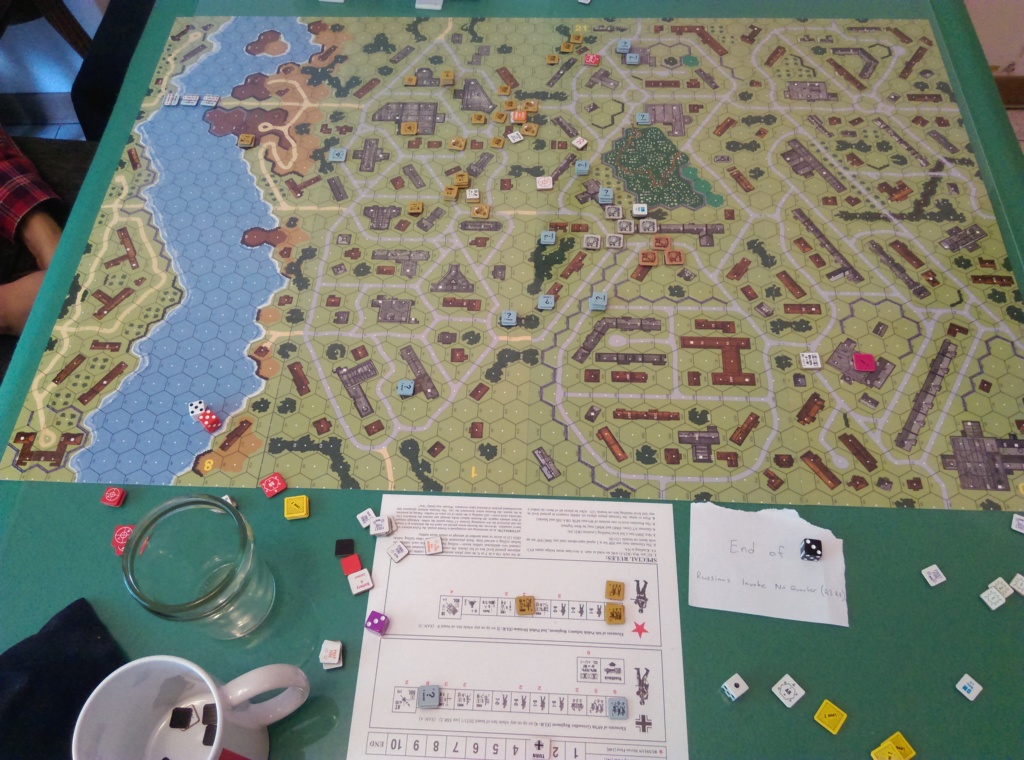 On turn 4, a Berserk Russian squad precipitated a collapse just in front of the board 21 graveyard. Most of my survivors retreat towards the central rubble. The south flank manages to hold, and so the OBA tries to get something going, but depletes itself with a 2nd red Battery Access card. The OBA support was very short-lived… 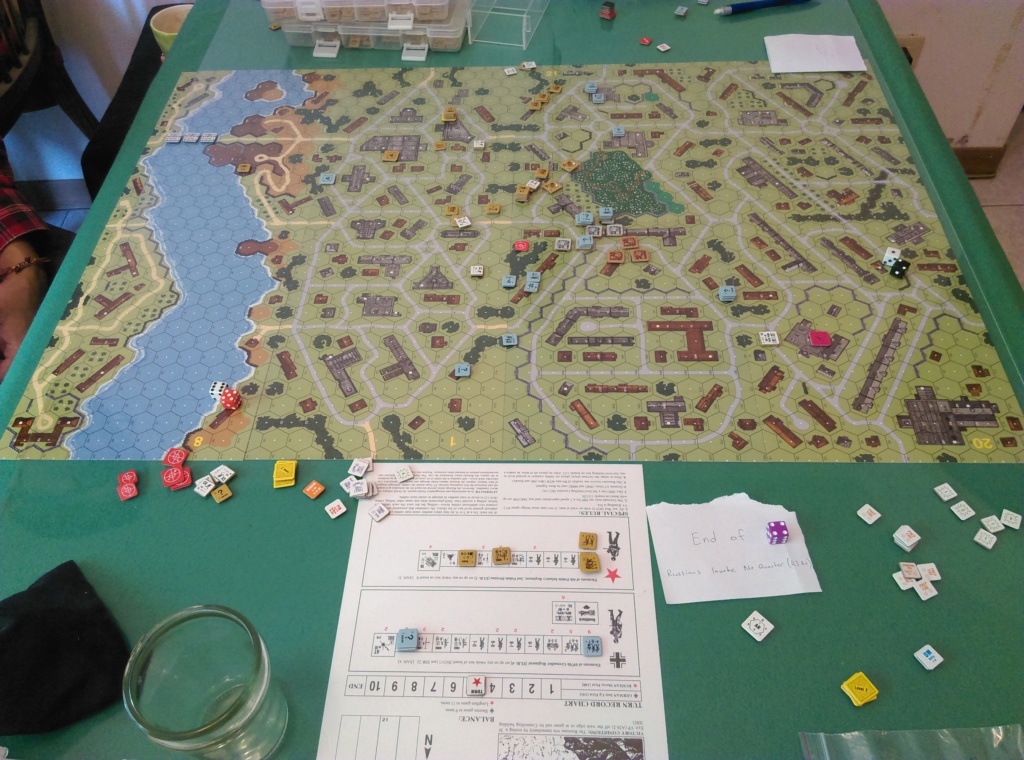 On turn 5, the Russians continue to put more pressure on the central rubble area, with my Germans hanging on. The rubble interferes greatly with the ability of the T-34/85s to support the infantry, and I am able to keep the Russians at bay for now. In the south, a T-34/85 tries to be aggressive, but is wrecked by a Reaction Fire Street Fighting (D7.211) attack with an ATMM (C13.7). This is where we ended play last Sunday (1/27). 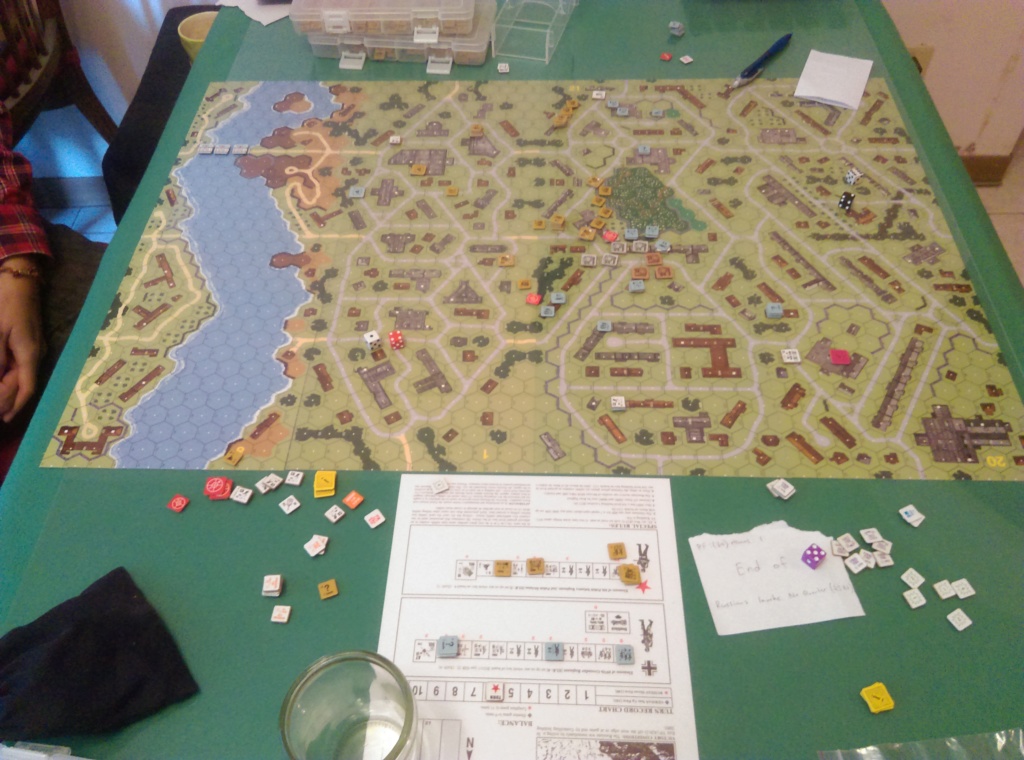 Resuming last Saturday (2/2) with turn 6, the Russians continue their slow-but-steady push. Both objectives are available to them, although the loss of the OBA makes taking 20H3 a lot more difficult. By the end of the turn, the Russians have pushed a salient into the middle of board 21. None of my HIP units (all on board 20) have been revealed yet. 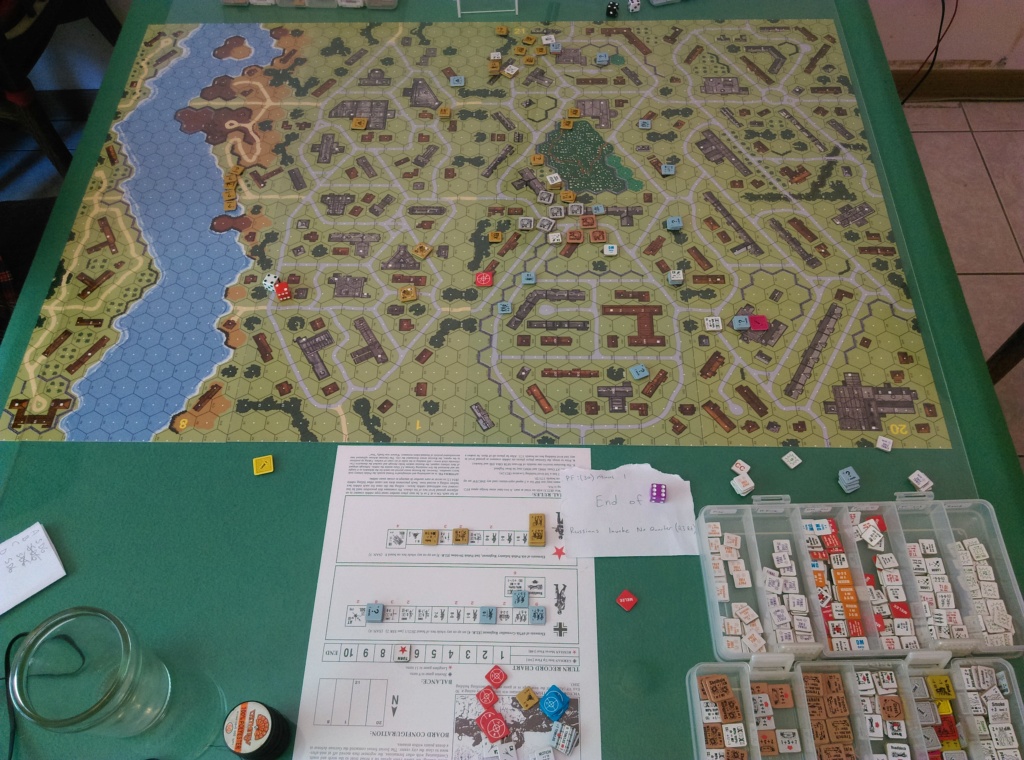 On turn 7, the Russians try to be aggressive, but I am able to break a number of their squads. Without the T-34/85 tank support asserting itself, I am finding the withdrawal quite risk-free and orderly. 11 turns is starting to look a lot closer…. 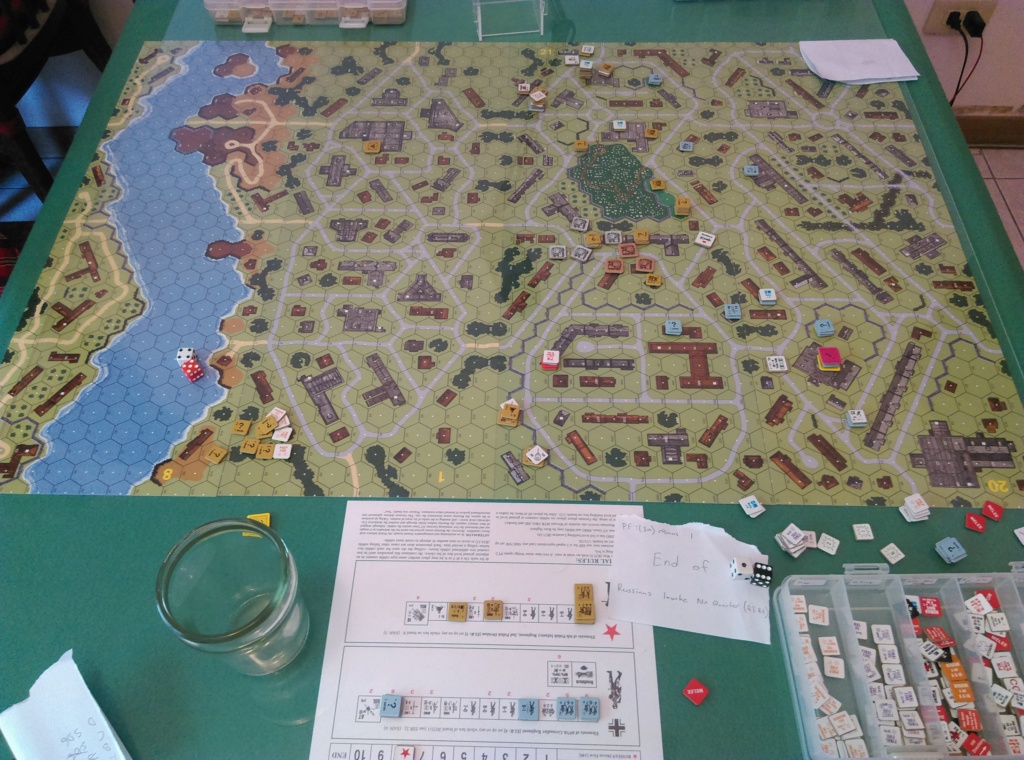 On turn 8, the Russians again try to push ahead, but their MCs are not up to the task, and the Germans hold their line for now. The Russians have quite a bit to do in the last 3 turns…. 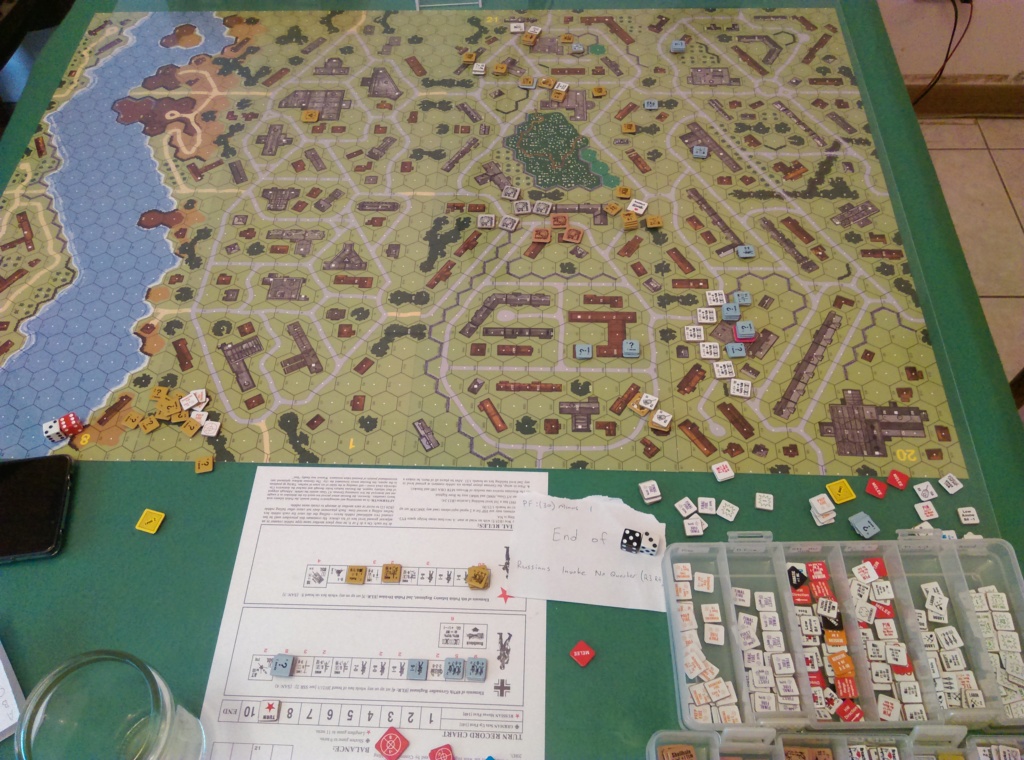 On turn 9, the Russians are finally entering board 20 (the westernmost board), but not putting a great deal of pressure on my calmly withdrawing Germans. By the end of the turn, I have advanced some squads to ambush one of the T-34/85s with Panzerfausts (C13.3). The hunter has become the hunted. 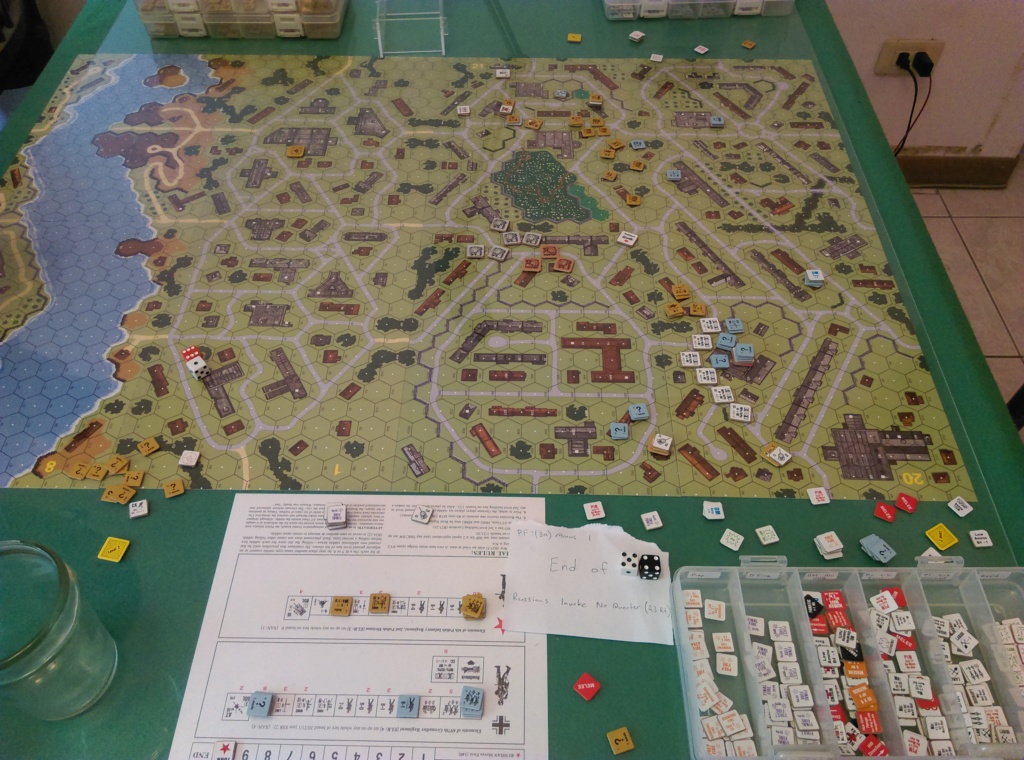 By turn 10, time is quickly running out for the Russians, especially after the stalked T-34/85 is hit with a Panzerfaust and transformed into a burning wreck. The Russians now have to make a desperate run for the edge, but they get nowhere fast, and it is soon apparent that they cannot exit enough forces. With 20H3 safely garrisoned and well protected by wire, Robin understandably feels that his opportunities have expired, and he concedes. 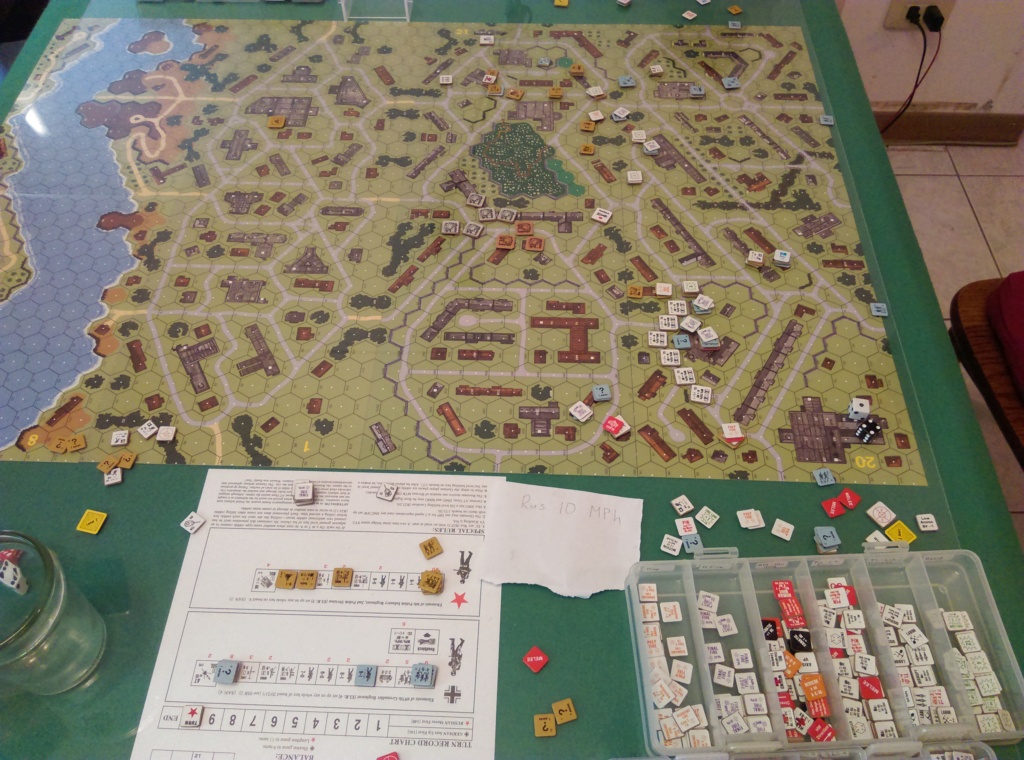 None of my HIP units ever came into play (although the psychological effect of their constant potential threat always gives some value). The decision to set up deep (and avoid being overwhelmed) at the beginning was the right one, and I was helped greatly by the quick exit of the OBA and also the less-than-stellar Russian MC DRs. This scenario plays well, and when playing the defender, one feels the luxury of having 6 leaders stabilizing the defense by always being on hand to rally, transfer SWs from broken units to GO units, move forces more rapidly, plus the countless other attributions that leadership makes.