Last Sunday, we had our monthly ASL meeting in Taipei. We had 6 players there, including Ken, Roy, Little Wolf, Neo, Ray, and myself. Ken and Roy wanted to familiarize more with AFVs, so they played ASL-S “The Whirlwind” (Ken attacked as German, Neo defended as American). Little Wolf and Roy also wanted to play a simple scenario with AFVs, so they played OA-020 “Revenge Of The Grays” (Roy attacked as British, Little Wolf defended as German). Ray hadn’t played ASL in a while, so we played a pure infantry scenario. The one I chose for us was T-014 “Gambit”, with Ray defending as German, and myself attacking as British (New Zealander). We played with German balance in effect (which adds a LMG). I chose this scenario, as it lets the defender move first, which removes the risk of a broken game from a flawed defense, and it also gives the defender the initiative at the scenario start. 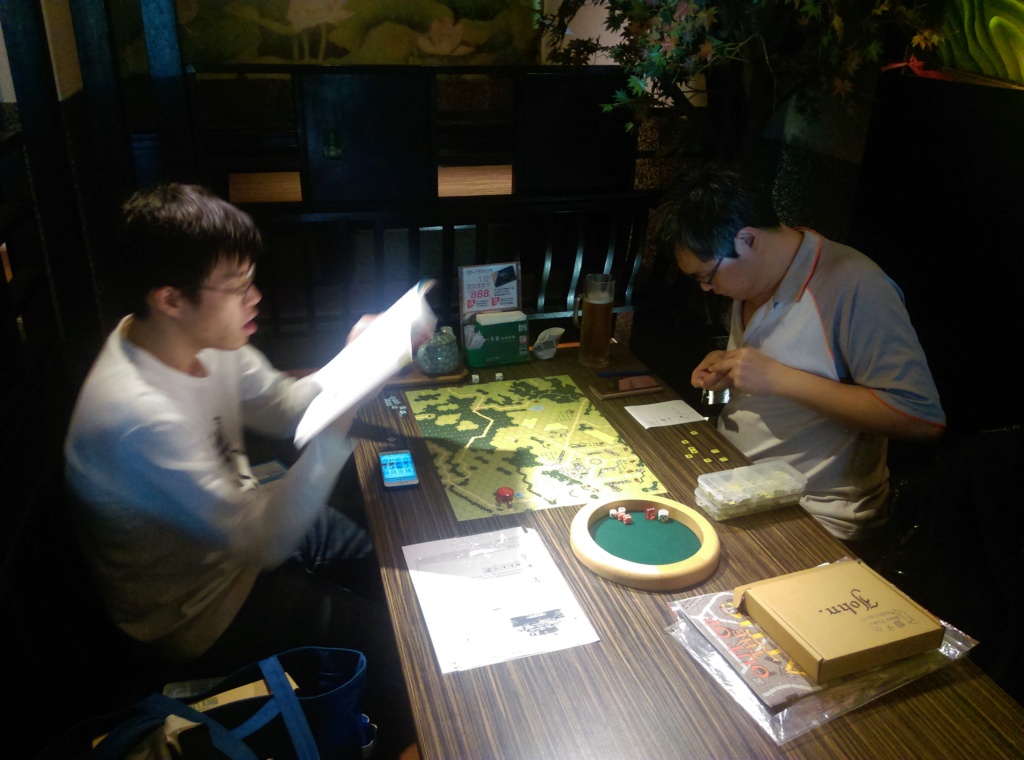 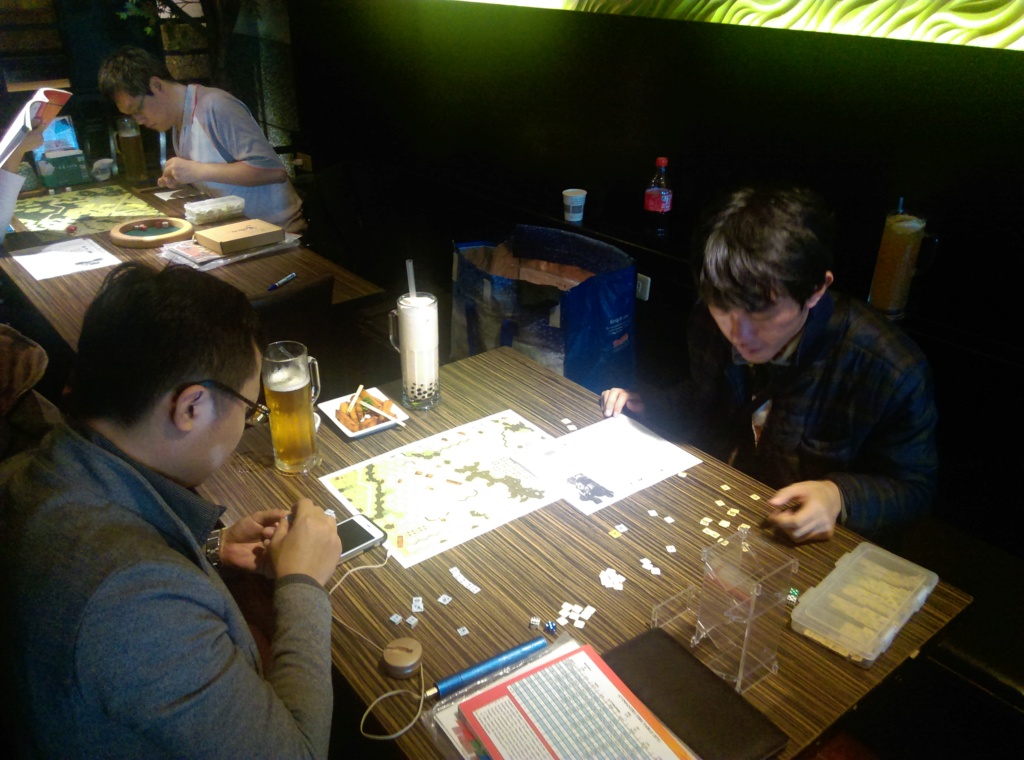 This scenario is played on boards 2 and 4, depicting an infiltration action with the British needing to exit about 75% of their starting OoB. The Germans defend with 8 (548) squads and 3 leaders. The British attack with 12 (458) squads, 3 leaders, and 5 SWs. The game is 8 full game turns (where the German defender gets to move first), and the British win immediately by exiting 20 VP (out of a force worth 28) off the south edge on/adjacent to road hexes 2I1, 2Q1, and 2Y1. SSR 2 has it that a small group (5 counters, minimum 2 MMCs) sets up on board (rows 5-7 on board 4).

SSR 2 gives this scenario a bit of spice; do the Germans try to overwhelm this small group, or focus on blocking the larger group ? Both options have their advantages and drawbacks. I chose to set up 2 248 HS, 2 51mtr, and a 458 covering squad set up in an over-watch position. I was hoping to be ready to place smoke for the main group entering on British turn 1. Ray set up the Germans in a cordon along the central area of the boards. 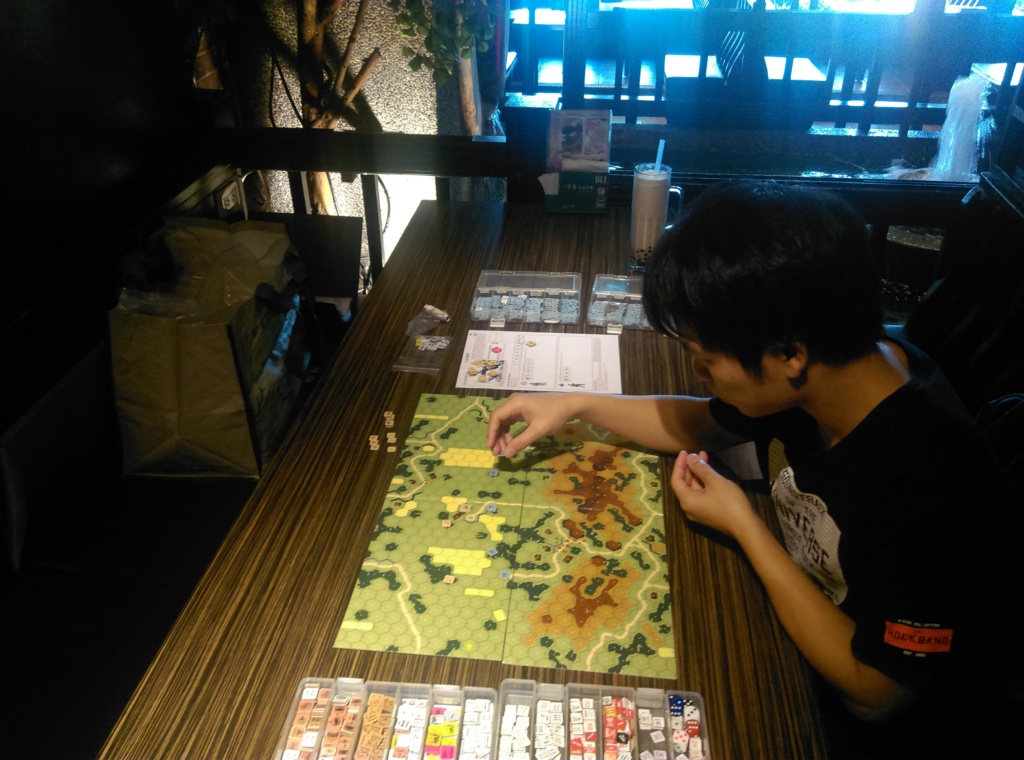 On turn 1, my mortar teams survived okay, but the overwatch squad broke, and was trapped upstairs (in 4O6.1). My turn 1 reinforcements split into 2 groups, one tried to storm 4O6 and save my squad, the other used some placed smoke to rush down the west side of the map. I did manage to retake O6, but not in time to stop my broken squad perishing in the RtPh. 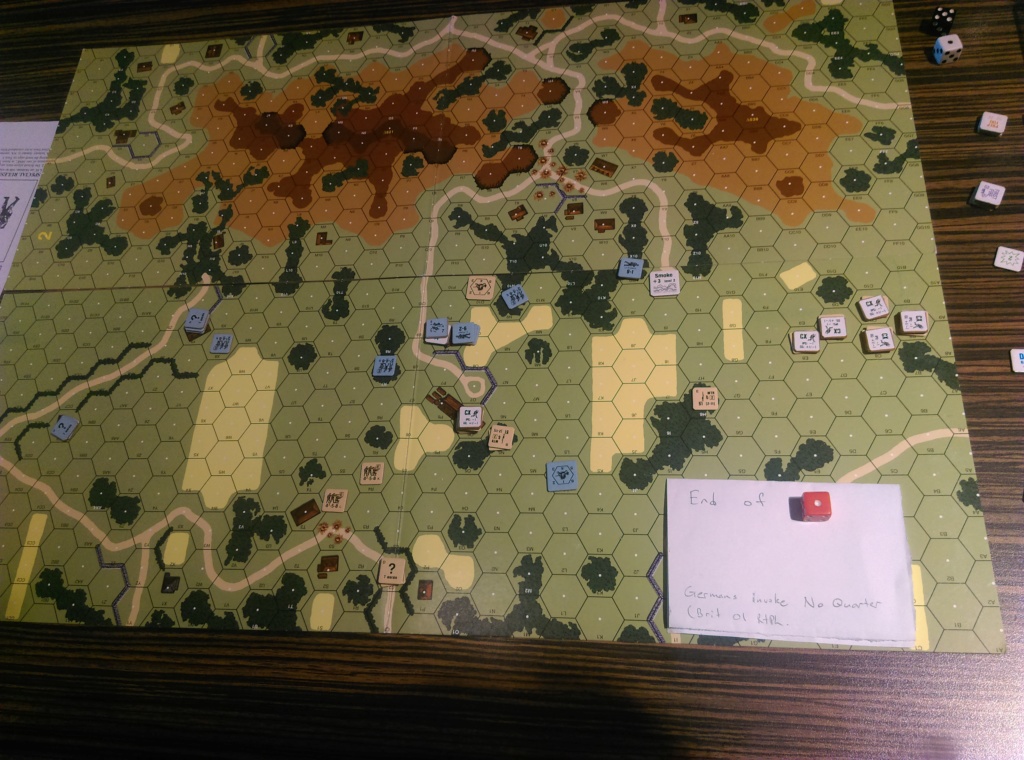 On turn 2, I try to duel the 9-2, but the Germans get the better of it, breaking up my MG group, and the attack stalls in the middle. But things go better on the west flank. One of my squads breaks, but the lone defending German squad goes Berserk, and I set him up for death in turn 3. If I can eliminate a few units, it will get a lot harder for the Germans to cover the map. 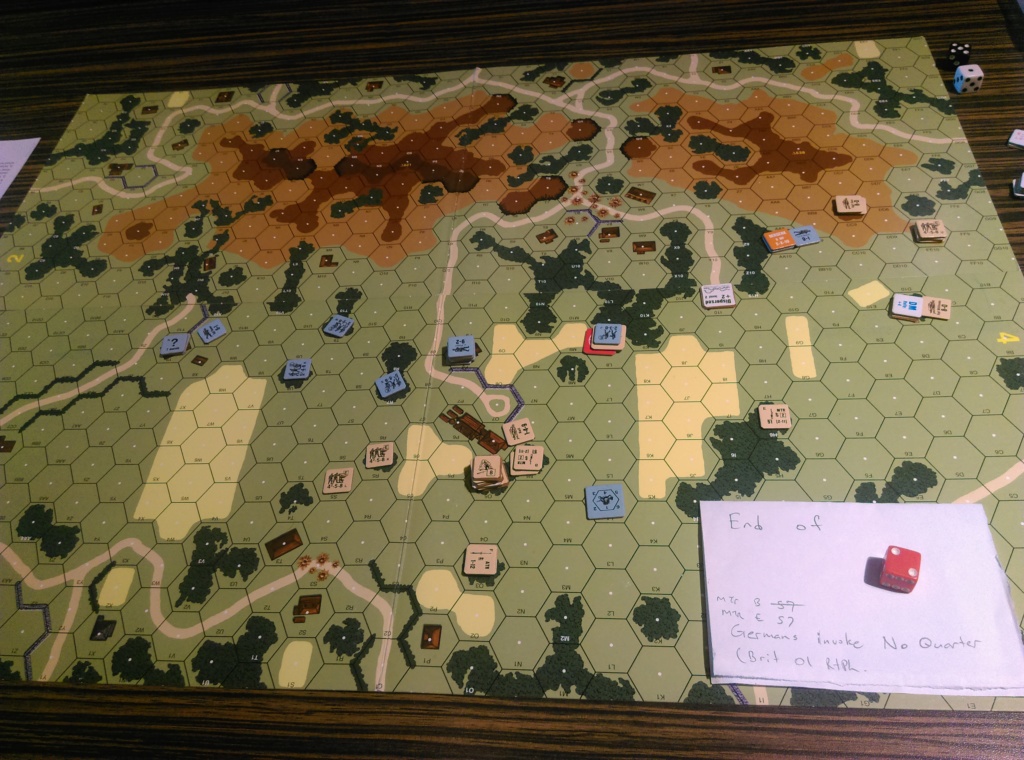 On turn 3, the German Berserk squad gets KIAed in its mad charge, and as the Germans rush to fill the gap, the British reinforce the breakthrough. Looking at the points available, it occurs to me that the British should try and take a few prisoners, as they qualify for Exit VPs. The British have generated 2 heroes through HOB, and since they have no Exit VP value, I am starting to use them to lead assaults with suicidal charges. 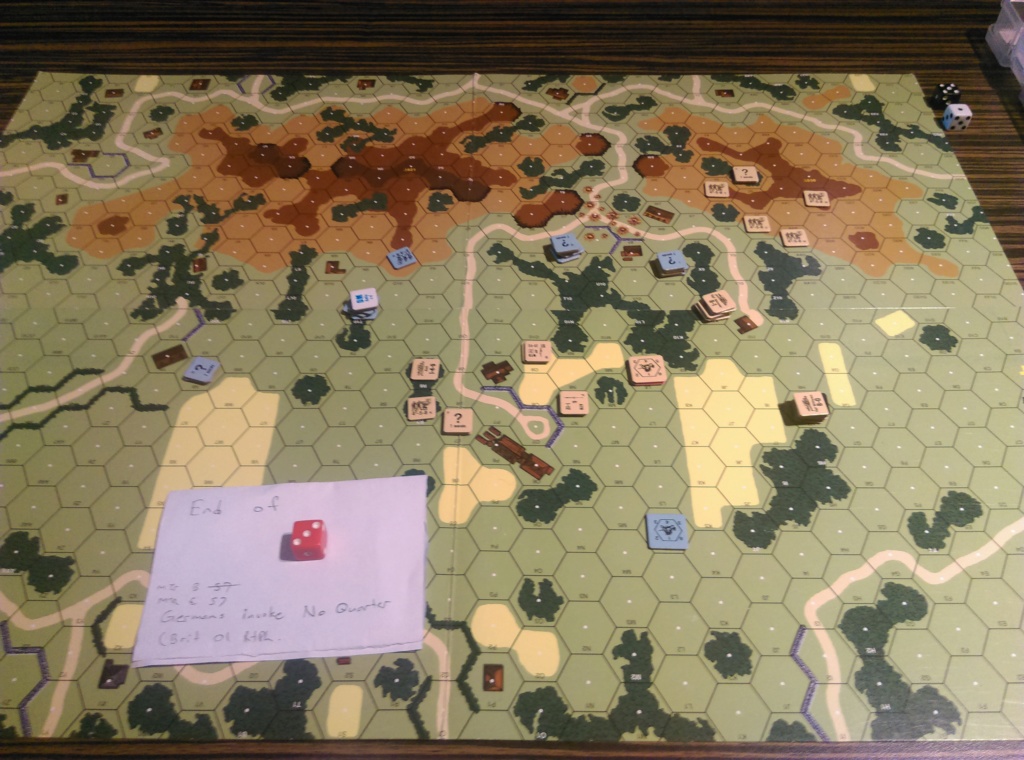 In turn 4, the British shooting gets hot, a few German squads break, and another goes Berserk. Once again, I set up the Berserk squad for death. I also get into CC with a pinned 548 with 2 squads and my 8-1 leader (was originally a 9-1, but ELRed earlier). Unfortunately, the -2 vs +1 Ambush advantage yields nothing, and disaster strikes when I lose the leader and 1 squad in the melee……… DISASTER !!!!  I will definitely need to exit some prisoners now. 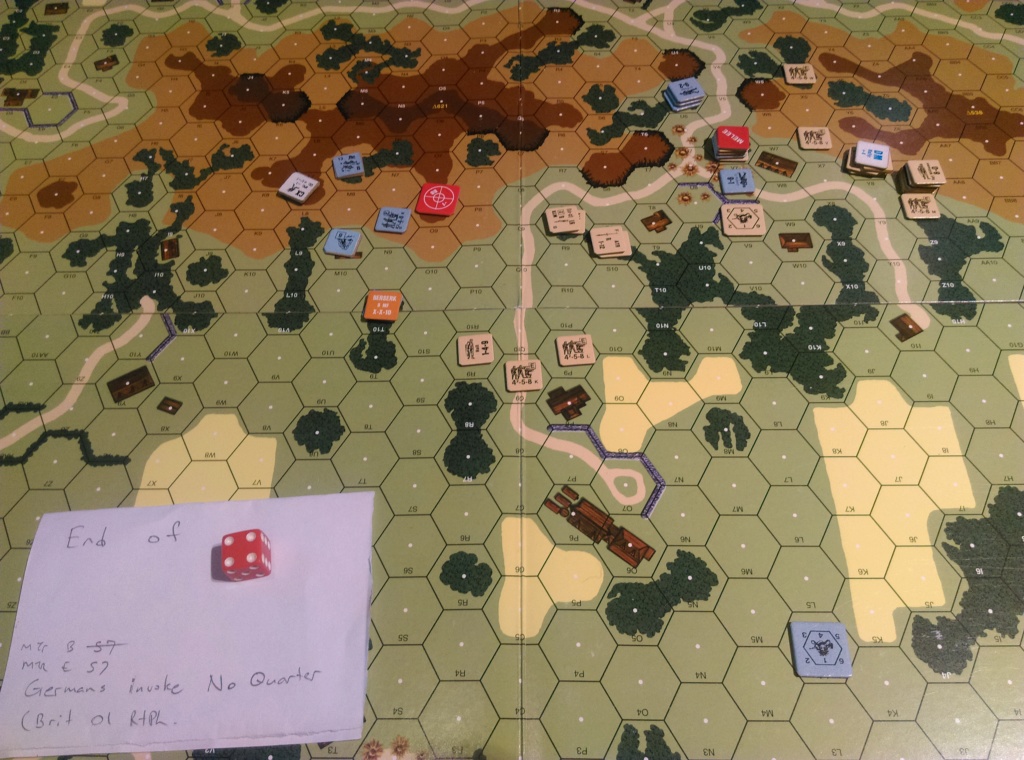 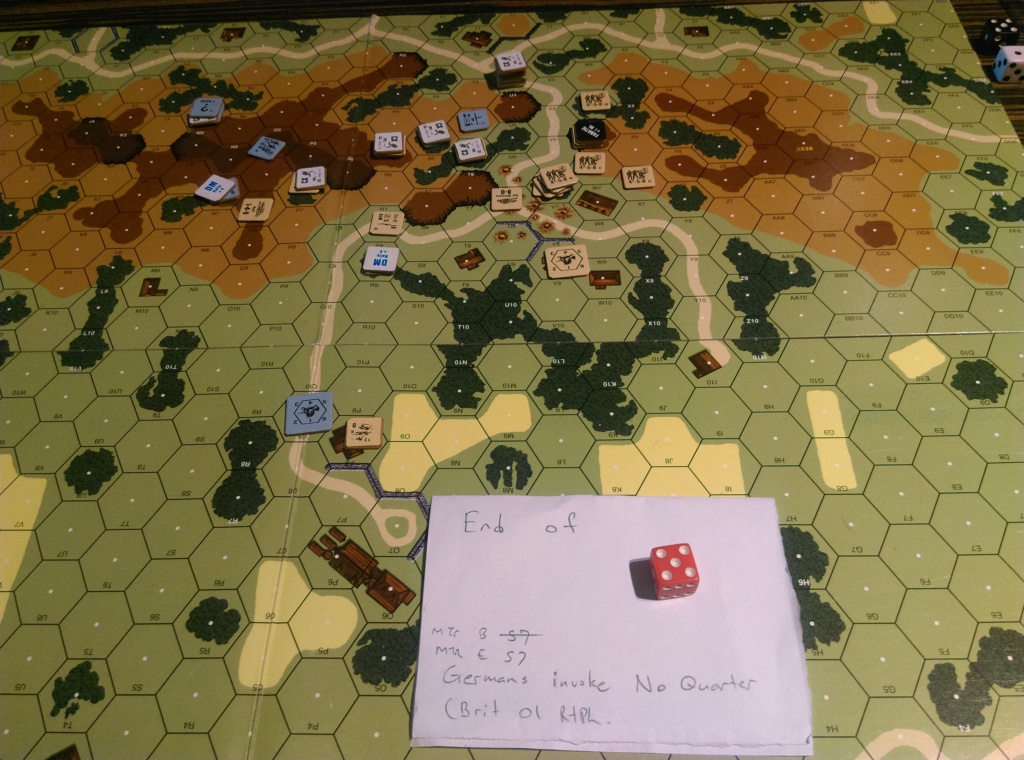 In turn 6, the Germans succeed in getting their remaining squads into good blocking positions, but I am able to break all of them in my turn 6 PFPh, as my hot IFT shooting continues. By the APh, I have taken all remaining German squads prisoner, the only remaining German unit is a 9-1 in Melee with a 458. With 13 VPs exited by the end of the APH, and plenty more in position to join them, it was white flag time for Ray’s Germans. 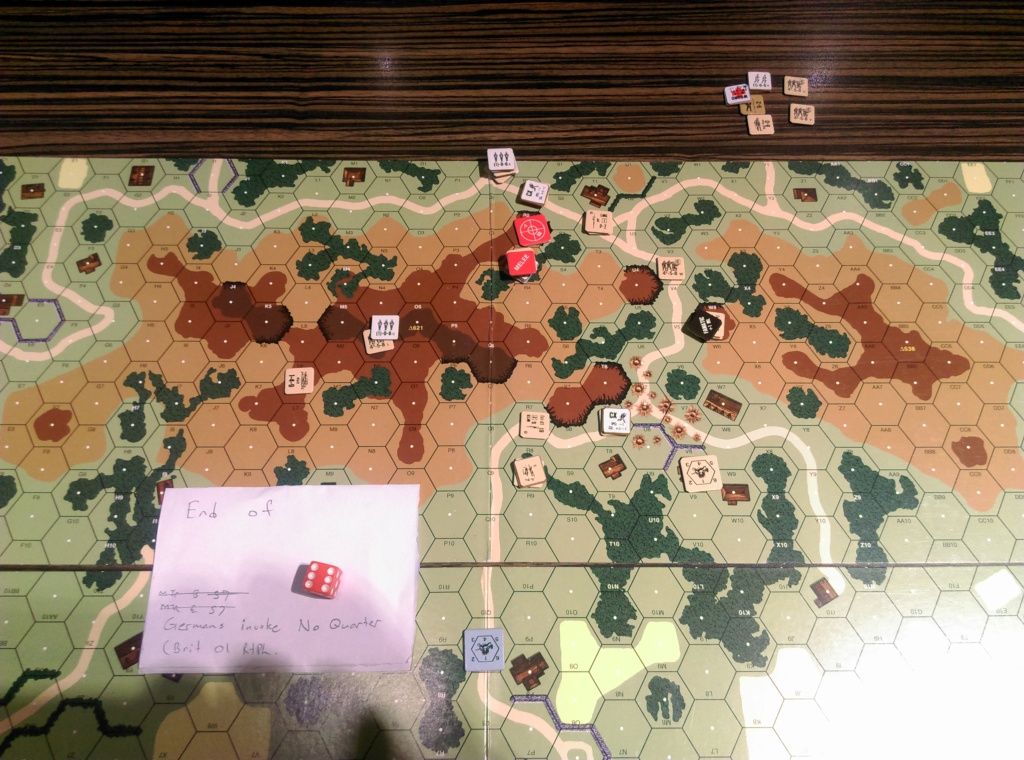 In spite of a rough start, I really enjoyed the better of the DRs from turn 3 forward. Losing my best leader and a squad in Melee was a setback, but my shooting was deadly, and the 2 generated 149 heroes were simply irrepressible.

This was the second scenario we played, and also depicts an infantry infiltration. It is played on board 3, and the Americans win at the end of 6 full turns by exiting >=1 squad-equivalent and >= 1 leader off Q10. For every German HS-equivalent that exits Q10, the Americans need to exit one more HS. The Germans defend with 7 squads (4x 467, 3x 447), 3 leaders, and 5 SWs. The Americans attack with 10 (747) squads, and 3 leaders in 2 groups, one entering Y1 (Gavin-Maloney Force), the other entering I1 (Ostberg Force).

The Germans enjoy the advantages range and good defensive terrain, while the Americans enjoy advantages in squad FP, and leadership (including a 10-3 and 10-2 leader). The Americans also get a good infantry smoke capability. We played with American balance in effect (exchanges an 8-0 American leader with an 8-1)

On turn 1, Ray did a good job of advancing quickly but safely, then advancing into contact concealed. The over-watch forces my units to skulk carefully and focus on survival. Some half-squads make it to the west side of the exit hex. I must keep Q10 interdicted. I would love to dig a foxhole there, but it doesn’t look feasible now. 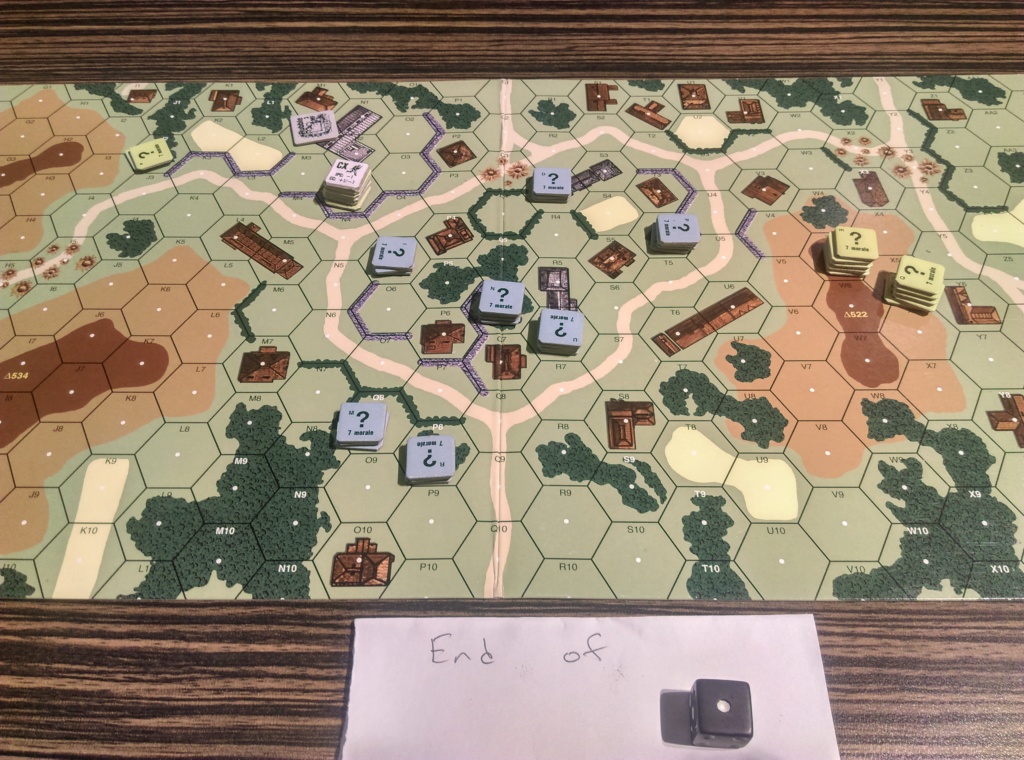 On turn 2, some German units break as more Americans close in. But I still have some good interdiction on Q10. I regret not having anyone at level 1 at the game start. 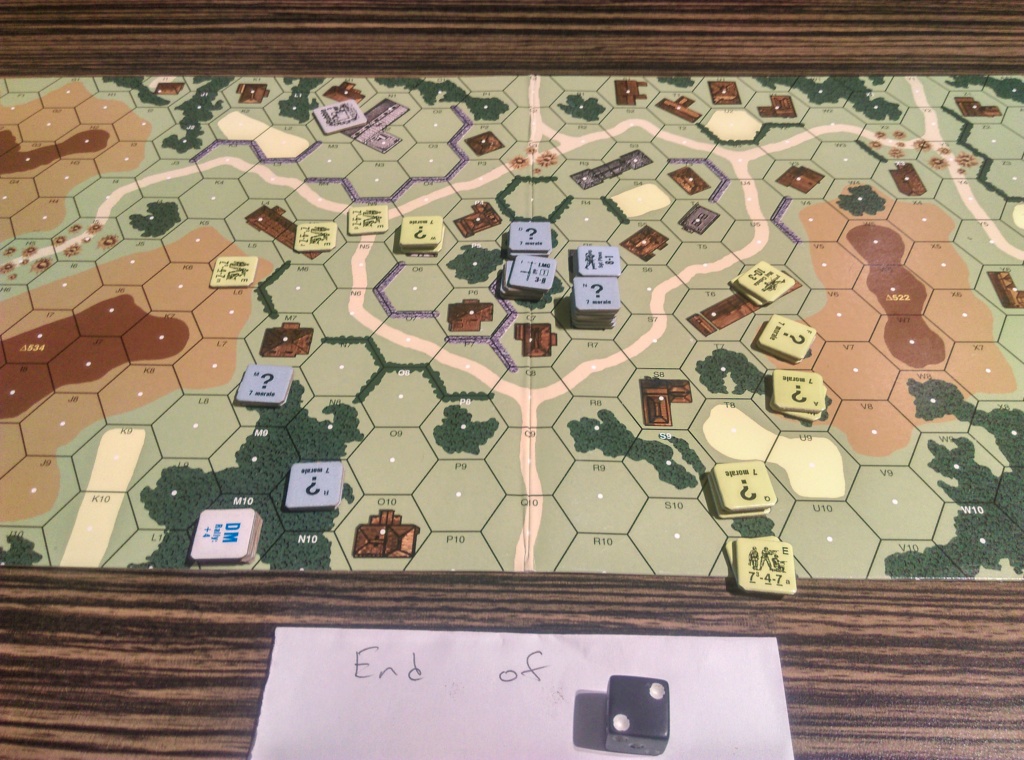 On turn 3, the Ostberg Force chooses to bypass the village rather than assault it, whilst the Gavin-Maloney force engages the MG groups from the southeast. My MG groups hold up quite well, and force a pause to re-group among the Americans. 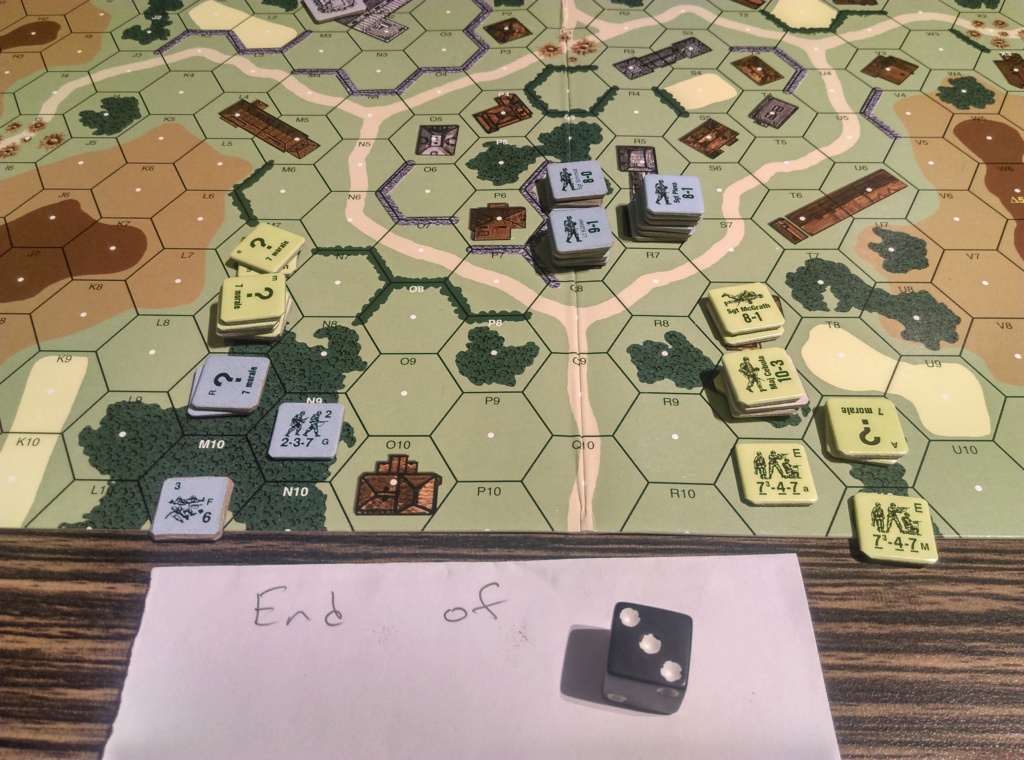 But on turn 4, the Americans hit the Germans hard, wiping out the last of my half-squads in the south, and breaking most of my MG squads. Crunch time…… 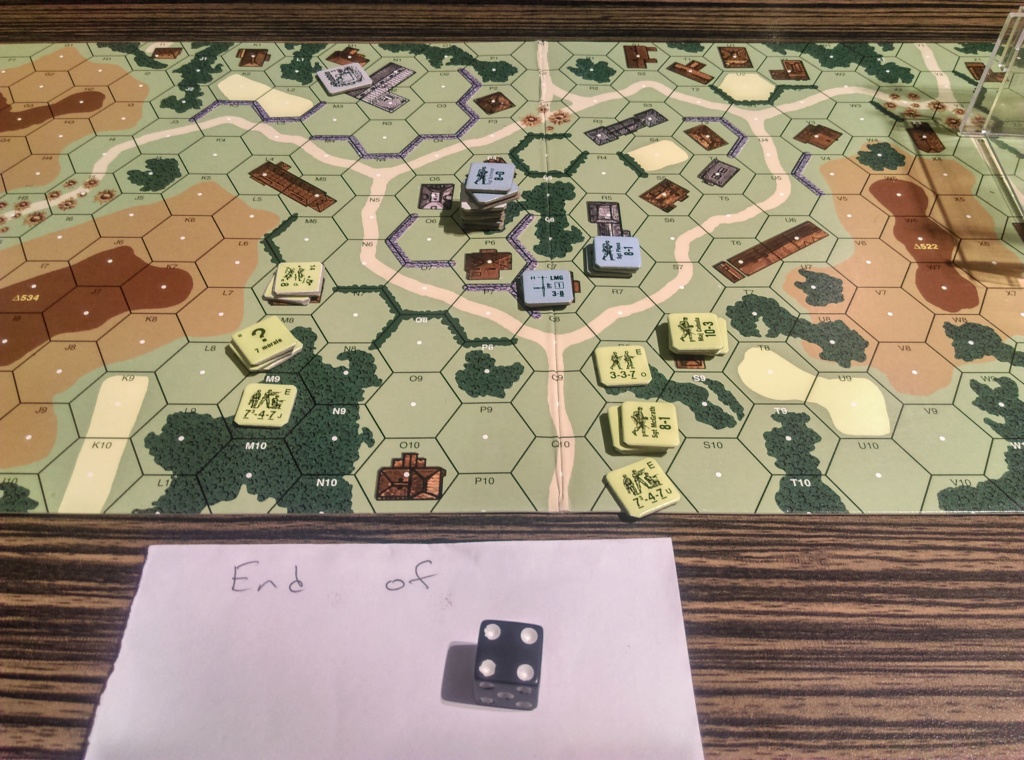 In turn 5, The Americans pound my would-be interdictors, and by the end of it, I’m defending Q10 with a MMG crewed by a wounded leader !! The Americans have exited a squad, but when the 8-1 tries to exit, he at first pins, then later breaks…. 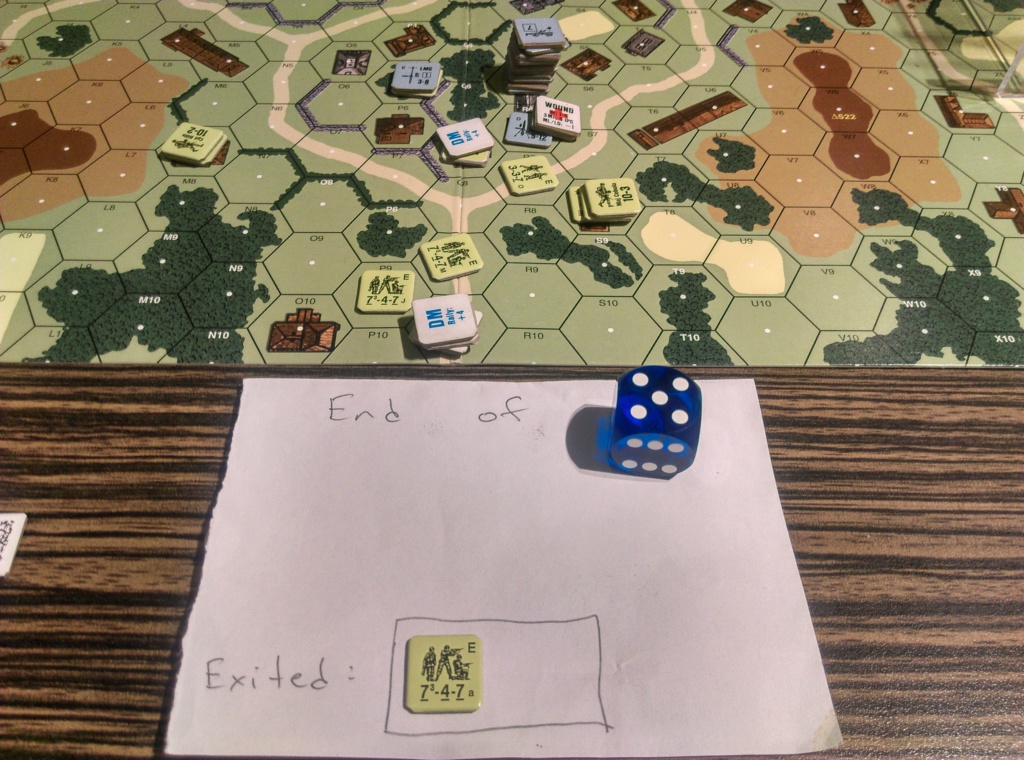 In the last turn, the American 10-3 directs fire which breaks my defiant leader, and an avalanche of American squads swarm off the map, clinching the game for Ray’s Americans. My setup was flawed on turn 1, and it allowed the Americans to move too rapidly on turn 1. I would say that’s what cost me in the end. Still, it was a fun scenario to play. Ray seemed to enjoy it plenty, too. 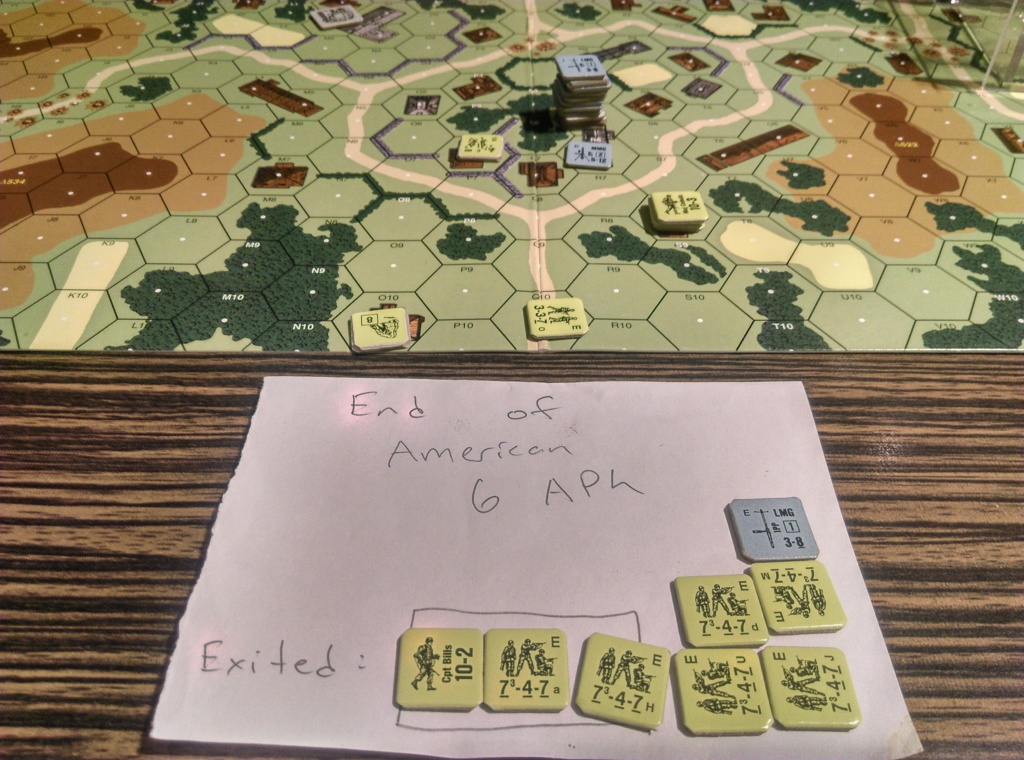 In the other games, Little Wolf’s Germans hung on to (the now partially Blazing) building 14H9 to defeat Roy’s British in OA-20 “The Revenge Of The Grays”. I didn’t get to see hardly any of that game being played, but I did see the final turn of Neo and Ken’s game of ASL-S “The Whirlwind”.   Neo had played a good patient game, and had done well to be still defending in and around the 1 building he needed with 4 squads. But Ken’s Germans got some hot ROF dice with his FlakPzIV/20, and was able to clear out 4 American squads defending around BB3 to grab victory right at the end. A good day of ASL in Taipei.

Happy Chinese New Year to everyone.