Yesterday, we had our monthly ASL meeting at N.T.U. in Gongguang, Taipei. 7 players were in attendance, and it was especially nice to see Tou Mu after almost a year. Neo and Ray were looking to play an uncomplicated infantry scenario with a couple of guns, so they played ASL-183 “The Pouppeville Exit”, with Ray defending as Germans, and Neo attacking as Americans. Robin wanted to help Tou Mu and Little Wolf play a late war combined arms scenario, which I thought would be a lot for both players to digest, but with Robin to help them along. They arranged to play PA-01 “Battering Rams”, with Little Wolf defending as Germans, and Tou Mu attacking as Russians. That left Roy and myself to play a small scenario with AFVs, and Roy chose T-06 “The Dead Of Winter”, with Roy as the attacking Russians, and myself as the defending Germans. We played it as is, with no balance in effect.

This scenario is played on rows R-GG of board 4, and depicts and infiltration action with the Russians needing to exit 50-60% of their starting OoB. The Germans defend with 4 (467) squads, 2 leaders, 3 SWs, a 37L AT gun with crew, and a dug-in PzIVE. The Germans also get 6 trench counters. The Russians attack with 6 (628) squads, 2 leaders, and 3 T-34 M40 tanks. Deep Snow and Extreme Winter are in effect. The game is 4.5 turns long, and the Russians win immediately by exiting 20+ VPs off the south edge on/between hexes AA1-GG1.

The Deep snow EC really slows movement, it costs infantry 1.5 MF and tanks 2 MPs to move in open ground hexes. With the date being 1941, there is no option for Riders (D6.2), so the Russians will need to move at a brisk pace. The T-34 M40 tanks are radioless, so must move in platoons or risk failing a non-platoon move TC (no small thing when there are only 4.5 turns). The Extreme Winter (E3.74) prevents both sides from entrenching, decreases by 2 the breakdown number of German SW/guns (note the implications of A.11), and German units rallying outside of a building suffer casualty reduction on an 11+ DR. The main focus is on exiting the tanks, which are worth 7 points each (6 with malfunctioning MA). Unfortunately, it isn’t easy for the Germans to stop them. Their only 2 guns are really too weak to penetrate the tank’s armor (unless getting a Critical Hit (C3.7) or a low TK DR on a rear or side hit. The German infantry get 1 DC and a 9-2 leader, so they can harm the tanks if they can get close, but with 6 626 squads, that might not be so simple to do. However, the 6 trench counters can be placed to cover much of the exit area, and with a bit of luck Bog (D8.2) one of the tanks.

I set up a line of trenches from AA1 to FF3 to protect the exit area, with the 37L AT gun and crew in GG4 (hoping for a lucky side/rear shot vs an exiting tank), with the dug-in PzIVE in FF5. The infantry squads went in T3, X1 and X8. Roy assembled his entry setup with the infantry spread out in a cordon. Roy also exchanged the Russian 8-0 leader for a 9-0 Commissar, which makes a lot of sense given the short time of the game. 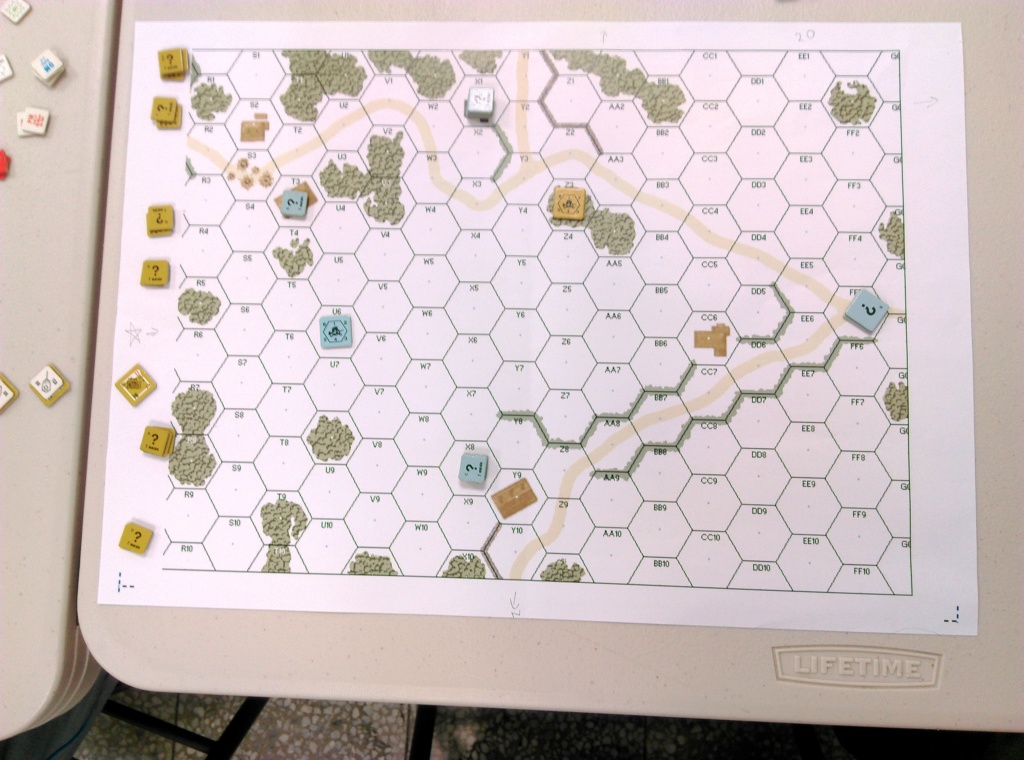 On turn 1, my shooting was sharp, and I managed to KIA a total of 2 squads. Unfortunately, I had 2 of my squads break, leaving me with only 1 functioning squad. In spite of the tanks being able to interdict row Y, I did at least manage to extricate the 9-2 (with DC) and its squad (with LMG) back Y1, ready to enter Z0. 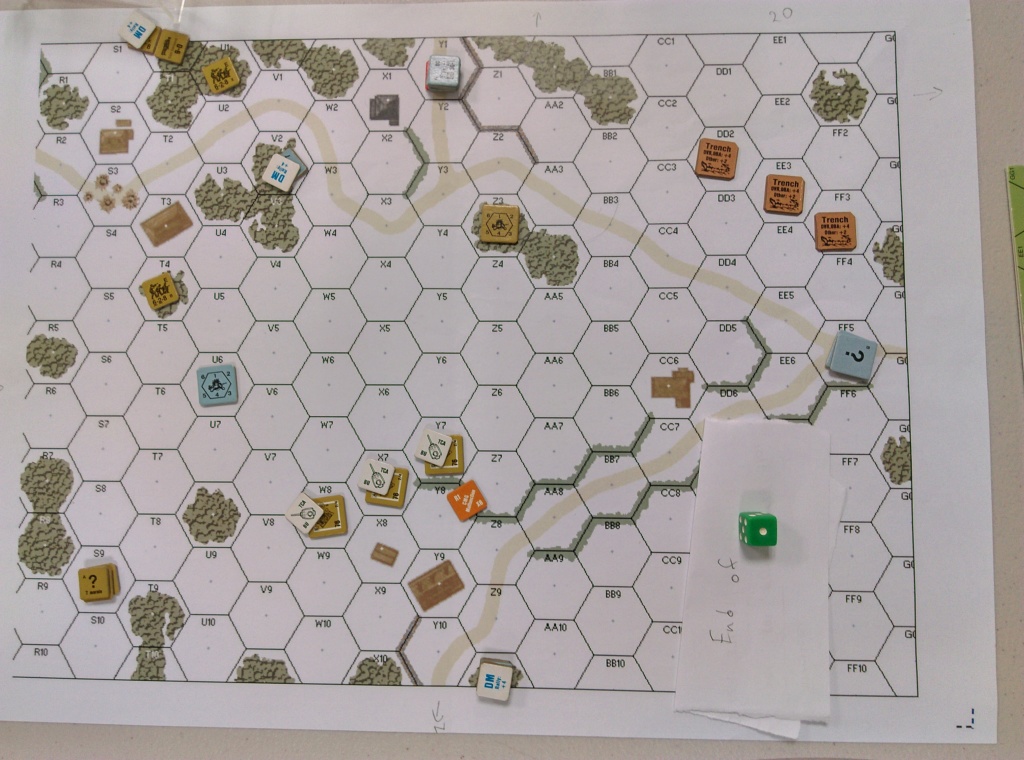 On turn 2, the Russians capture one of my broken squads, and my 8-1 rolls 11 on his self rally, which with Extreme Winter results in casualty reduction, and he succumbs to the wound dr. My dug-in PzIVE attempts to Deliberate Immobilize one T-34, but both units fail to harm each other. 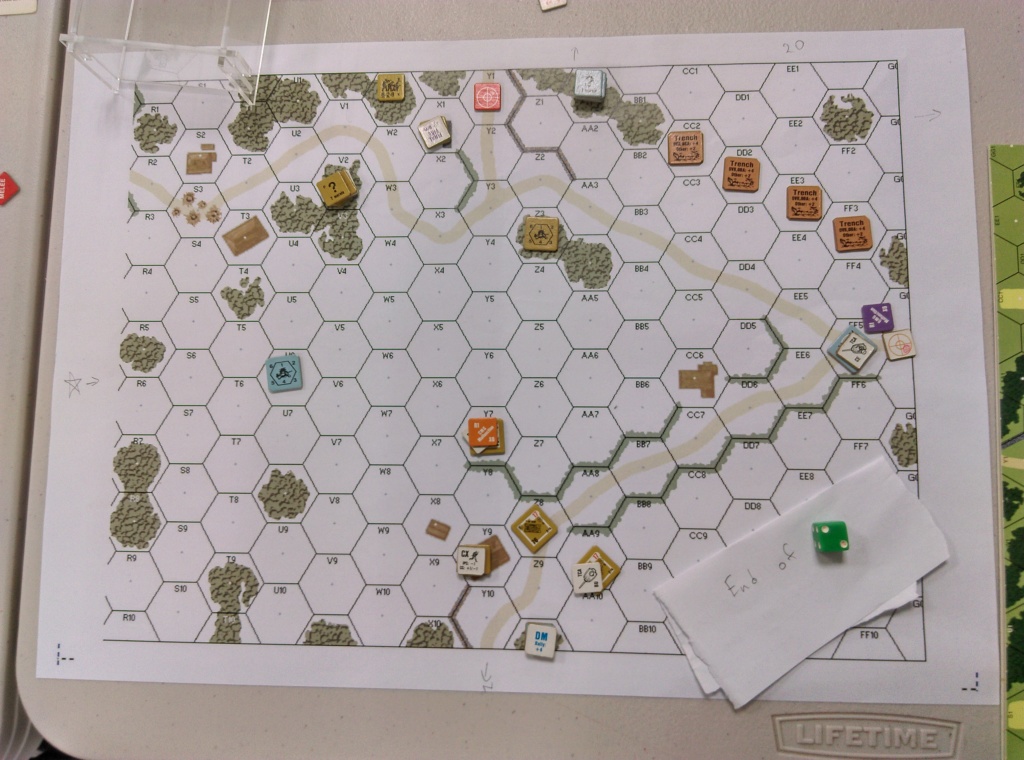 On turn 3, one T-34 hits and wrecks the dug-in PzIVE, and the Russian 8-1 captures another German squad (at this point, we were thinking that exited prisoners would count for exit points, but they do not). Meanwhile, the rest of the Russian infantry close on the trench line, and advance into contact of the last German squad. However, my squad and leader hold on for now. 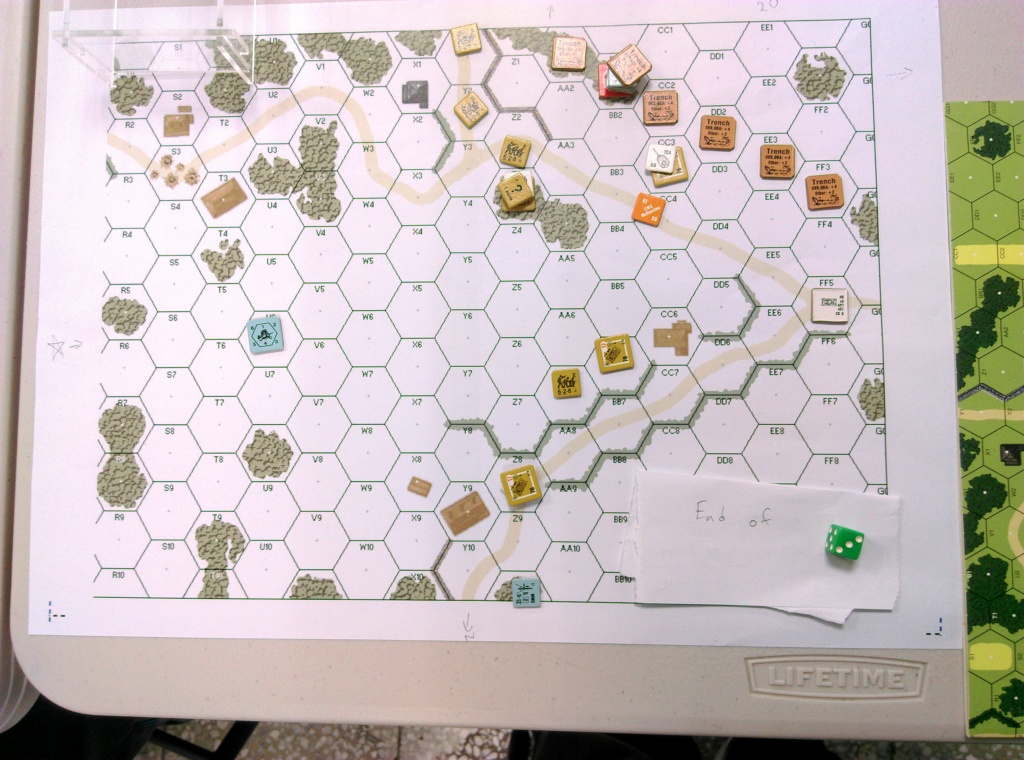 On turn 4, the Russians try again to break the German squad with a heavy dose of close range SMG FP. But the German squad rolls a HOB, generating a 149 hero and battle hardening to a 468. However, the 2 DR on the MC gives the Russians a SAN, which attacks the same hex, my random selection drs are 5,5,5 and Roy selects the 9-2, who fails the wound dr, dying immediately. He then attacks the 149 again, rolling a 1, which kills him to, and vs the squad rolls a 2, pinning it. At least the 468 is able to pass the subsequent LL2MC, but I am hanging on by a thread here. Meanwhile, the T-34s re-group for their final exit. On their Mechanical Reliability DRs (see Russian vehicle note M), Roy rolled 3 11s, so had 3 stalls !!! Better than rolling a 12 for sure, but 3x is a lot for a small scenario…. 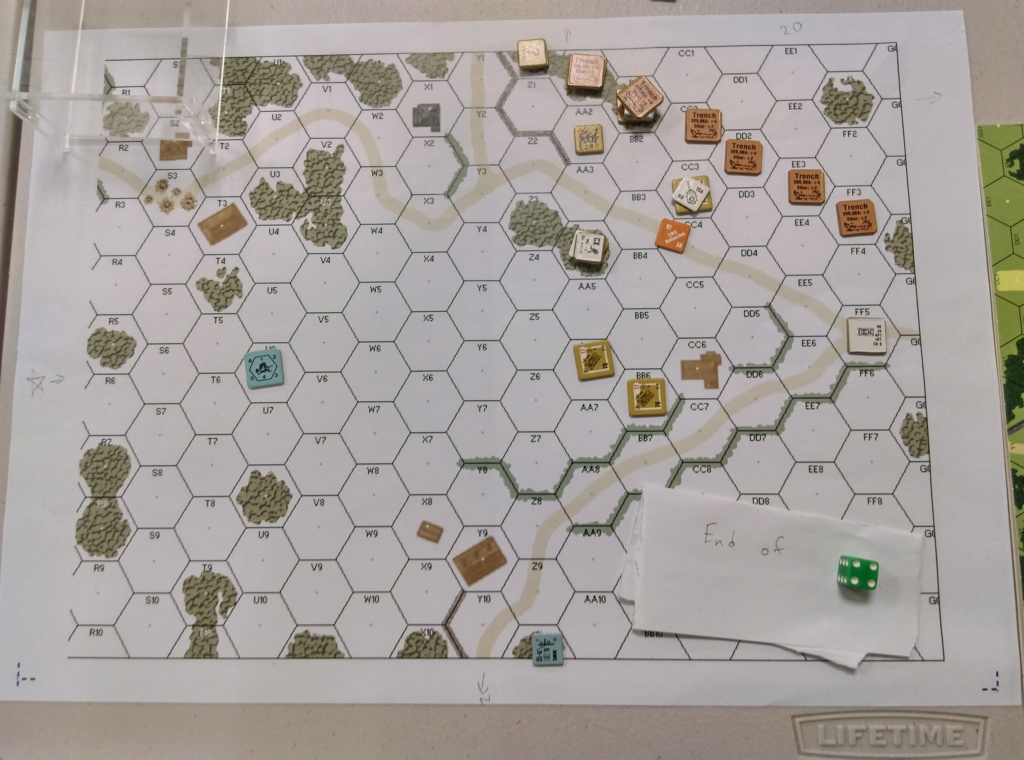 On turn 5 (the final turn), my lone squad survives the Russian PFPH, and is able to place a fire lane along to GG4, breaking one 628 trying to ext through there. One T-34 bogs on the trench line, but the other 2 manage to exit, leaving the Russians 6 VPS to get. But in Final fire, my 468 throws the DC, which breaks 1 squad and pins the 8-1 leader, and only the 9-0 Commissar and 2 squads are able to exit, leaving the Russians one point shy of victory. A very tight game, where 1 rather heroic squad was able to make the difference !!!! 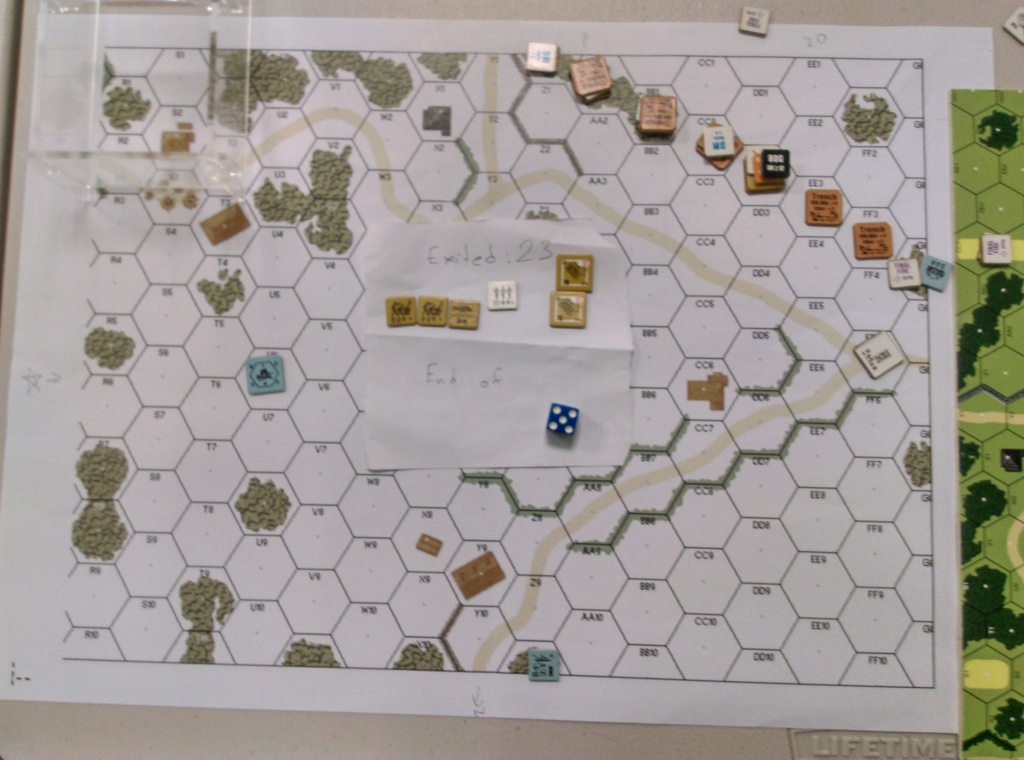 We finished this game in about 2 hours, and since Robin hadn’t played a game yet, I offered to let him play Roy, but he preferred to continue teaching. So Roy and I played a second scenario, which was ASL-179 “Ranger Stronghold”, with Roy playing the attacking Germans, and myself playing the defending Americans. We played with German balance in effect (which extends the game from 6 to 8 turns).

The Americans are outnumbered in squads, but not so much in terms of firepower. However, the 2 PzIVF2 tanks add a lot of firepower to the Germans, as well as giving them a good smoke capability. The 4 Baz’43 SWs the Americans have are a real threat vs the tanks at short ranges, so the Americans will want to employ a reverse-slope defense to lure the Germans into a killing ground and keep them at bay. The Germans simply want to look for the opportunity to wear down the Americans, breaking them, and cutting off their routs when able to do so.

I deployed one squad and set up out of Germans LOS with a 747 squad at the tope of each stack to mask the positions of the 10-3 and SWs. That way, the Germans must treat EVERY stack as a major threat to either tanks and/or infantry. Roy set up his Germans to move rapidly on turn 1. 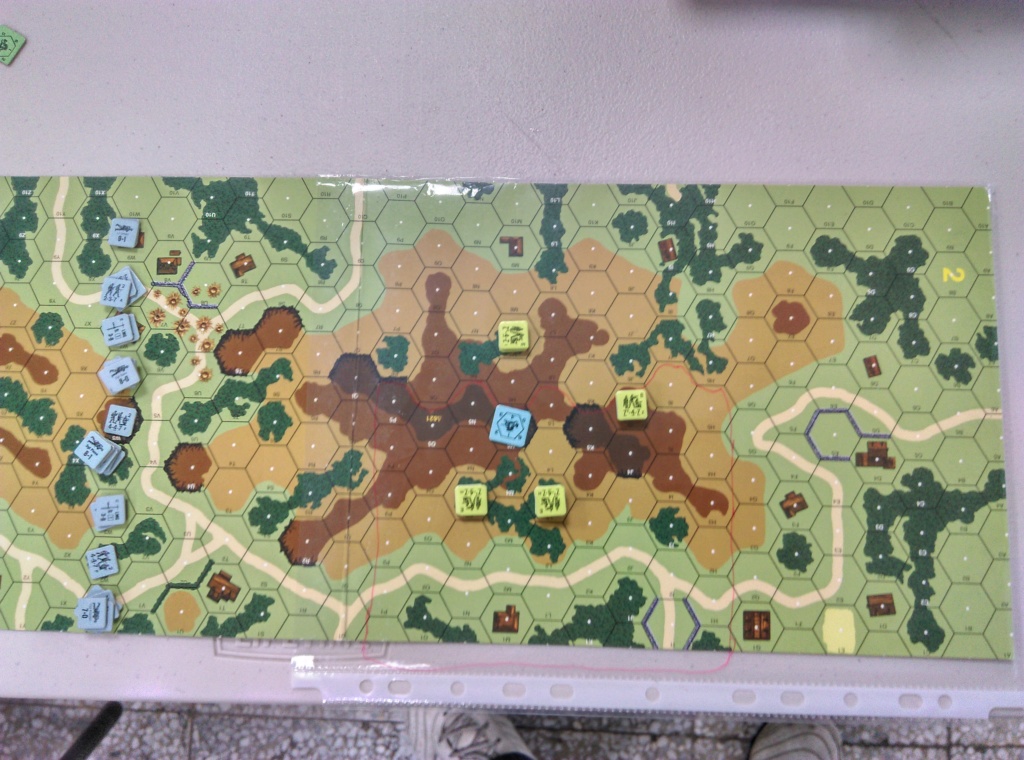 On turn 1, the Germans take the ground offered, and push up on to hill 621. My Americans entrench in J5, and spread out in their APh. 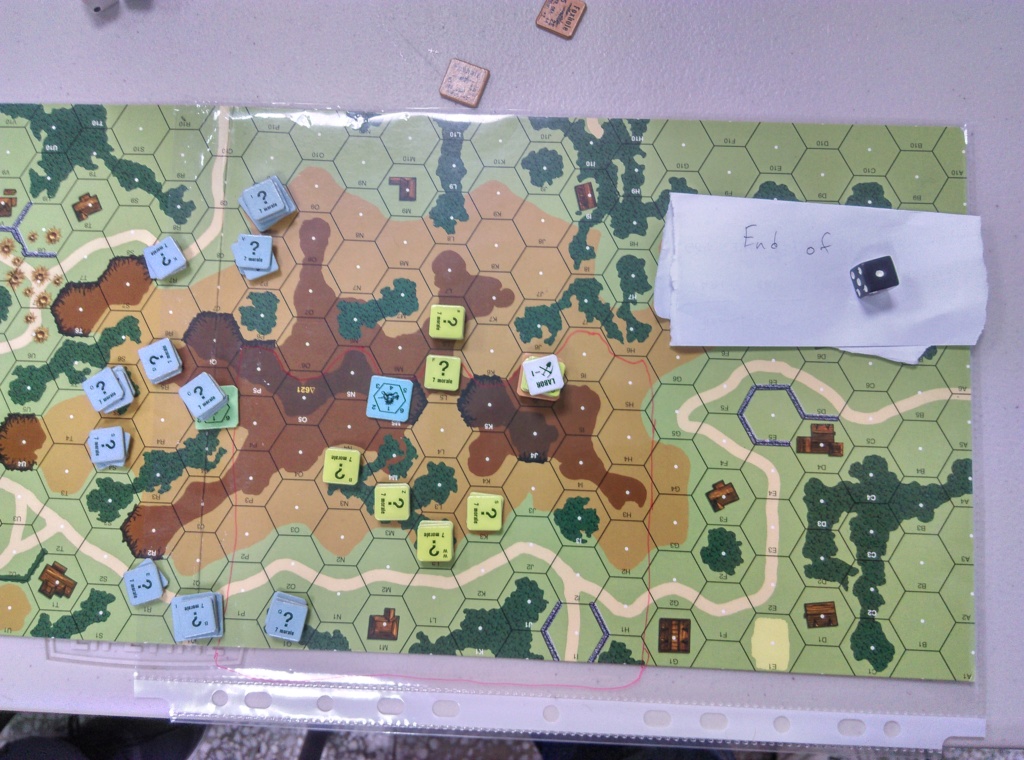 On turn 2, the Germans continue to push eastward, and even get into some CCs, where I lose 2 half-squads, and the Germans lose 1 half-squad. I manage to dig a 2nd foxhole in K3. I had one Baz shot at a tank, but missed by 1. 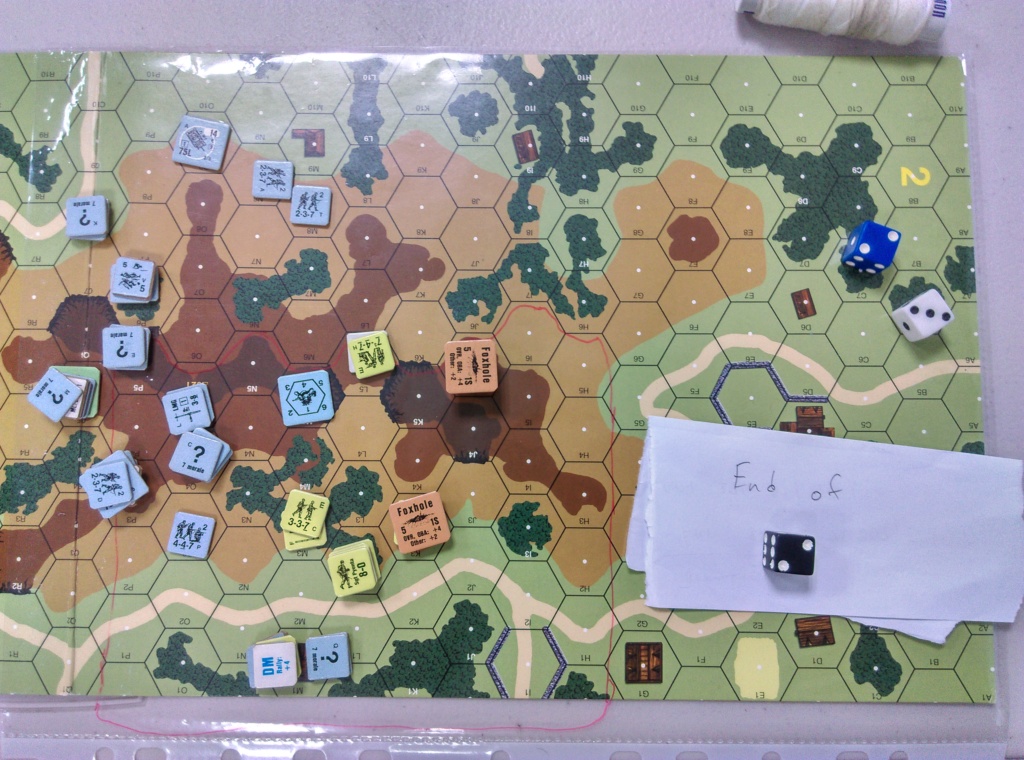 On turn 3, the Germans have pushed the Americans back to row K, and my Americans lose another squad. I’m starting to run out of warm bodies !!! 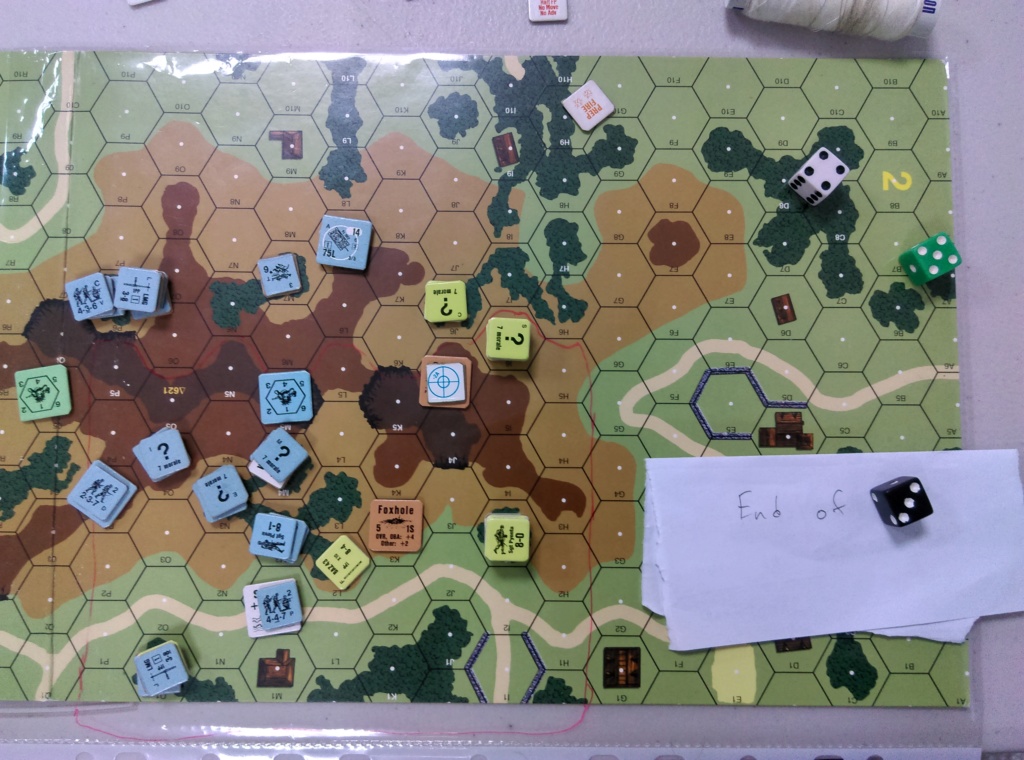 On turn 4, Roy gets bold with one of his tanks when he sees that I have no unbroken squads with bazookas. Getting adjacent to my 10-3 and its 2 MMG armed half-squads, the tank gets an ITT hit with its 75mm gun, and gets a k/3 result, which eliminates the 10-3 leader and both half-squads. By the end of the turn, my only unbroken unit is a 149 hero. 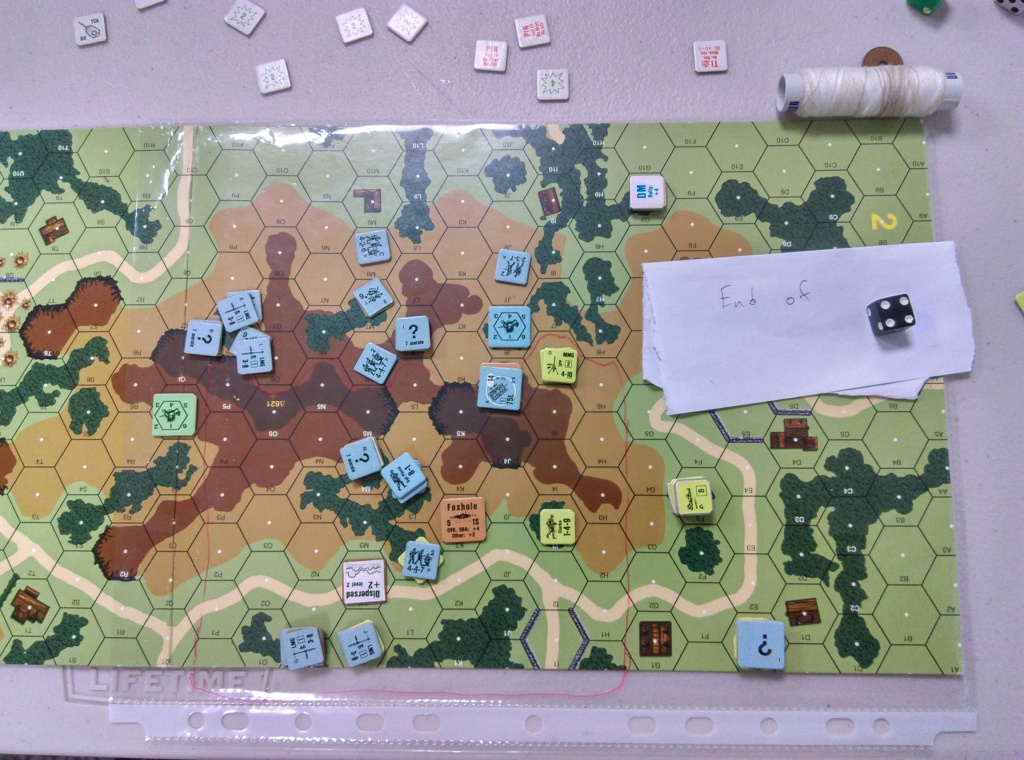 On turn 5, I rally nothing, Roy’s Germans eliminate the 149, and in the MPh, surround the remaining (broken) American infantry, clinching a German victory. One of his PzIVF2s was rolling hot for the entire game, and in the end, my Americans had no answer. Although the hot dice certainly helped, Roy is learning how coordinate tanks and infantry better all the time. 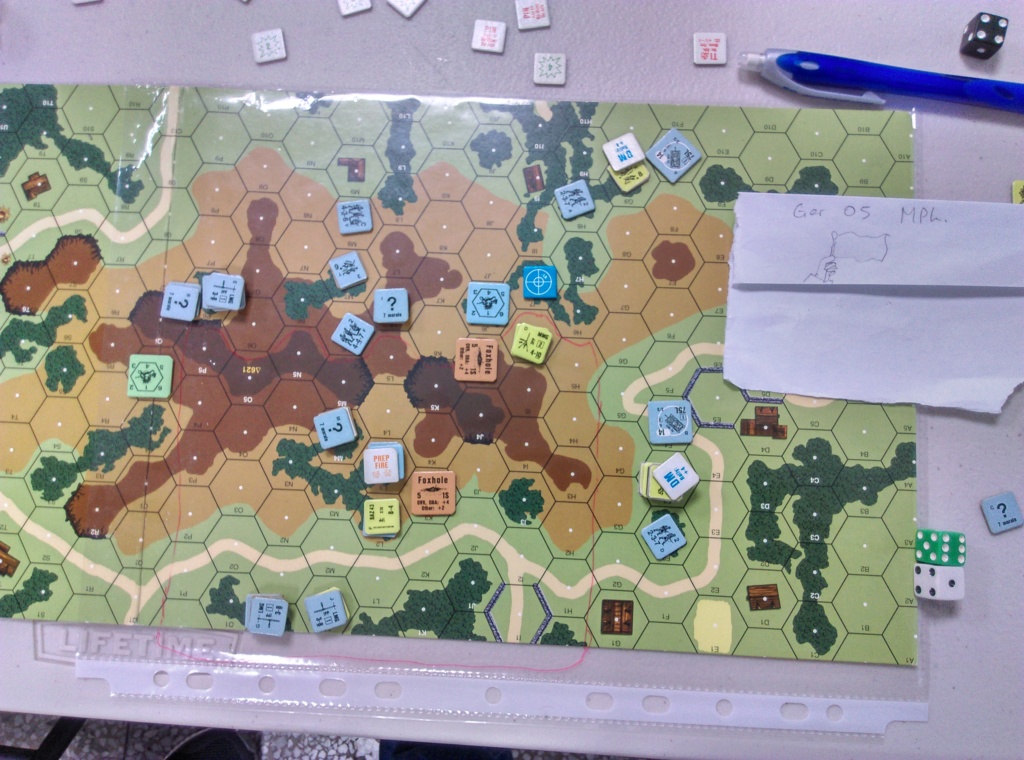 In other games, Ray’s Germans were holding out well vs Neo’s Americans (in ASL-183), and it took until the last turn for Neo’s Americans to control 2+ buildings. However, he couldn’t account for the last AA gun in N7, so Ray’s Germans held on for the win. Tou Mu and Little Wolf were still battling it out in PA-01, and although they didn’t complete the game (it was looking grim for Little Wolf’s Germans), they were learning a lot about Gun Duels (C2.2401) and other aspect of AFV combat. All in all, another good ASL meeting at N.T.U.