In this scenario, both sides have to attack and defend, which to my way of thinking makes it one of my favorites. SSRs limit the Russians to only being able to move a number of squads per turn equal to a dr + turn number. SSRs also allow the Germans to cross the board 23 canal, but there are risks attached. The only building with a 2nd level is 20H3, which means that neither side has a particularly commanding LOS. The Germans have to break through a defender that outnumbers them whilst the isolated group tries its best to survive. If they are wiped out, the Russians will control 20H3, and it will be very difficult for the Germans to take it back. On the other hand, if the relief force can get through, the Germans will likely never relinquish control.
The Germans have many good leaders and some good support (especially their access to smoke via OBA and AGs) with which to relieve the Citadel. But the Russians have quite good leaders, too, and can manufacture a strong defense with their assets. However, just defending isn’t going to be enough for the Russian. They also need to attack the Citadel and wipe out the defenders before the relief arrives. The Armored Cupolas (D9.5) are hard to destroy, and because they have infantry crews, they can lay Fire Lanes (A9.22), which can dominate some of the longer streets of board 20 and canals of board 23. The AT guns will struggle to penetrate the front armor of the StuG IIIBs, so should set up to anticipate side shots. Note that the AA gun cannot set up in a building (which really leaves only woods and (non-paved) orchard hexes as places to remain HIP in LOS).

Once again, this scenario was played on a printed VASL map (enlarging the map size) with parallel actual boards for LOS checks. I also made some Russian Armored Cupola counters by printing out some VASL counters and gluing them to 1/2” cardboard squares. A bit rough-and-ready, but overall, I was happy enough with the result. Robin set up the Russians to slow down my relief, whilst the 527s assaulted the Citadel. I set up the German Citadel defenders to buy time (translate: block the stairwell and hide upstairs) whilst 2 (roughly even sized) groups would try to reach them. One group from the 23BB5 bridgehead, and the other would cross the easternmost part of the canal and attack down the east flank. 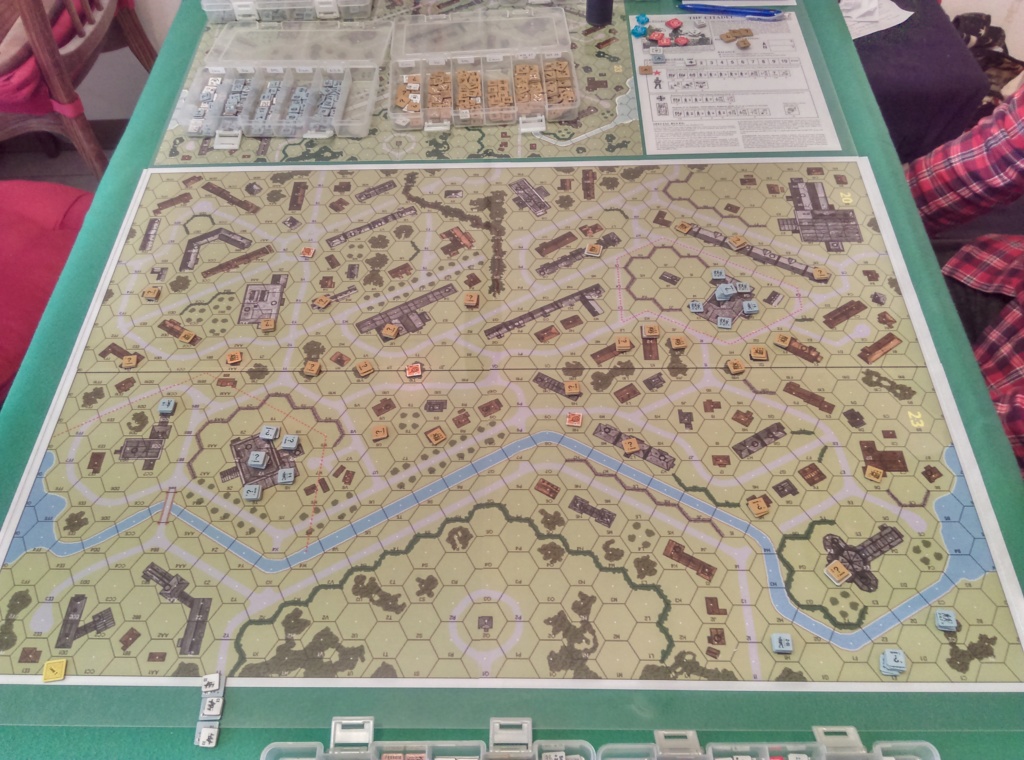 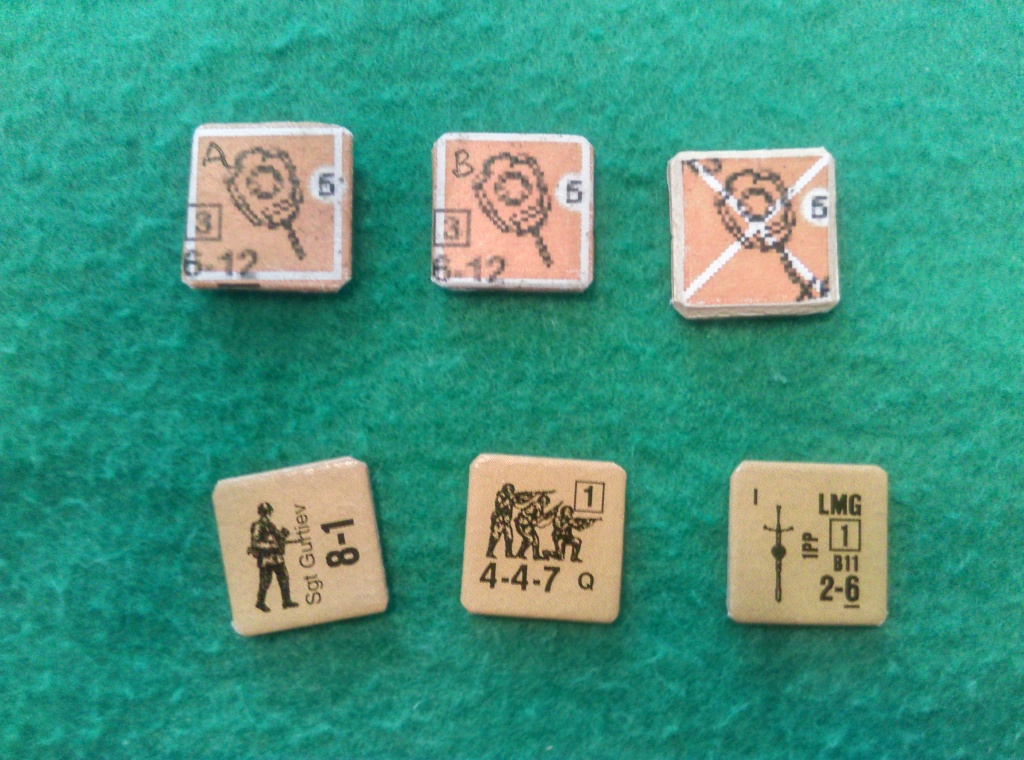 On turn 1, my Germans skulk in the citadel, send a screen of half-squads (covered by Opportunity Fire (A7.25) fire-groups) across the canal, and try to push down the X4-P8 orchard road. In the AFPh, a StuG IIIB spins round to acquire the 23N8 Armored Cupola and achieves a Critical Hit (C3.7) with HE (since my usual practice is to use HE on unlikely AFPh shots when AP is subject to depletion), which eliminates the Armored Cupola. In the Russian turn, the SSR6 movement d is ‘1’, so the Russians can only move 2 MMCs !!! The one good thing happening for the Russian in this turn was recalling a CE StuG IIIB with a ‘1’ SAN dr. 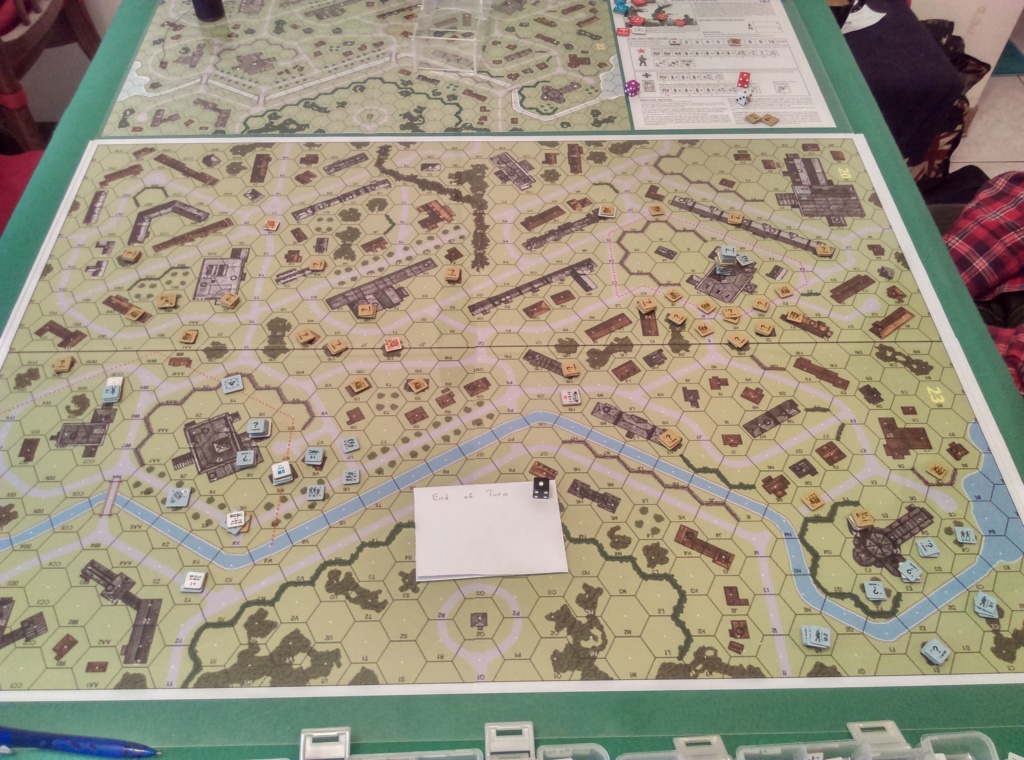 On turn 2, another platoon of German infantry cross the canal, but the relief forces are largely stalled (I was hoping for some covering smoke, but the OBA was being fickle). The Russians roll ‘1’ again for their movement dr, and have to contend themselves with an amoeba-like crawl towards the 20H3 stairwell. The Germans upstairs become encircled when a melee occurs in 20H3. 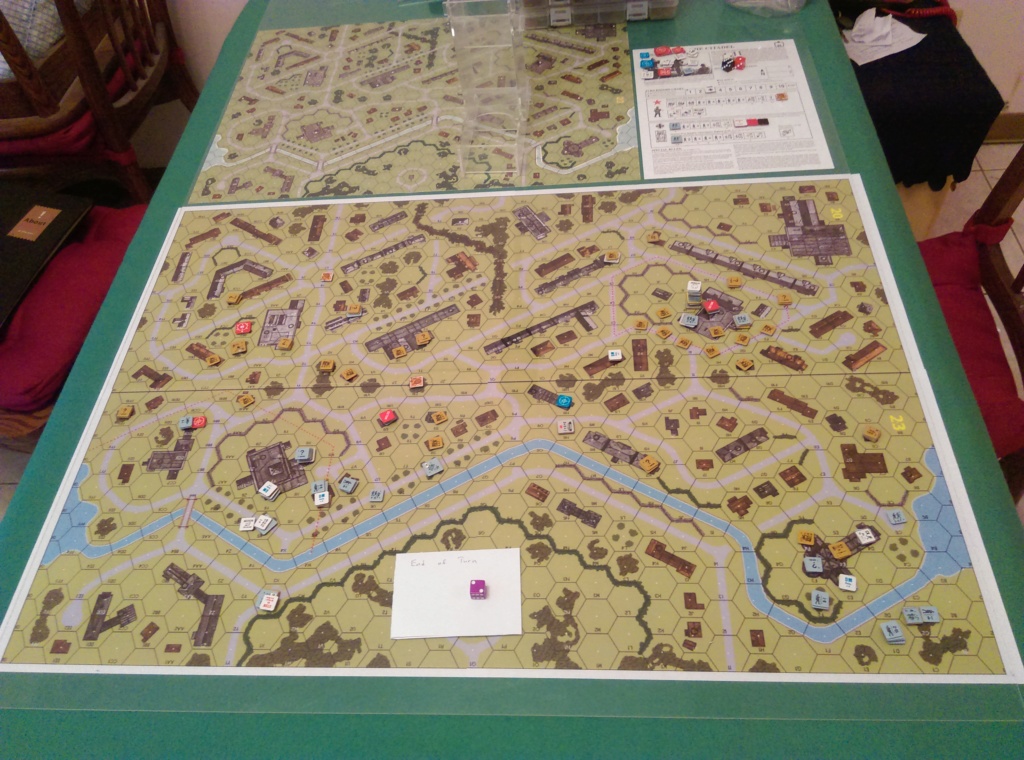 On turn 3, the remaining infantry on the east flank cross the canal. Not much progress otherwise, although I do manage to win the melee in 20H3.The Russians movement dr is ‘6’ and Robin is able to push lots of squads towards the 20H3 stairwell. But the Russians lack a hammer with which to hit the upper level German units. I am yet to see the 9-2 and MMGs.

On turn 4. I get some OBA smoke, and make some progress down the north bank of the canal. I also get a leader and squad into CC vs an Armored Cupola in 23T10, which results in a Melee. The Russian move dr is ‘3’, and Robin continues to push for the 20H3 stairwell. CC occurs, but it again goes the way of my Germans. 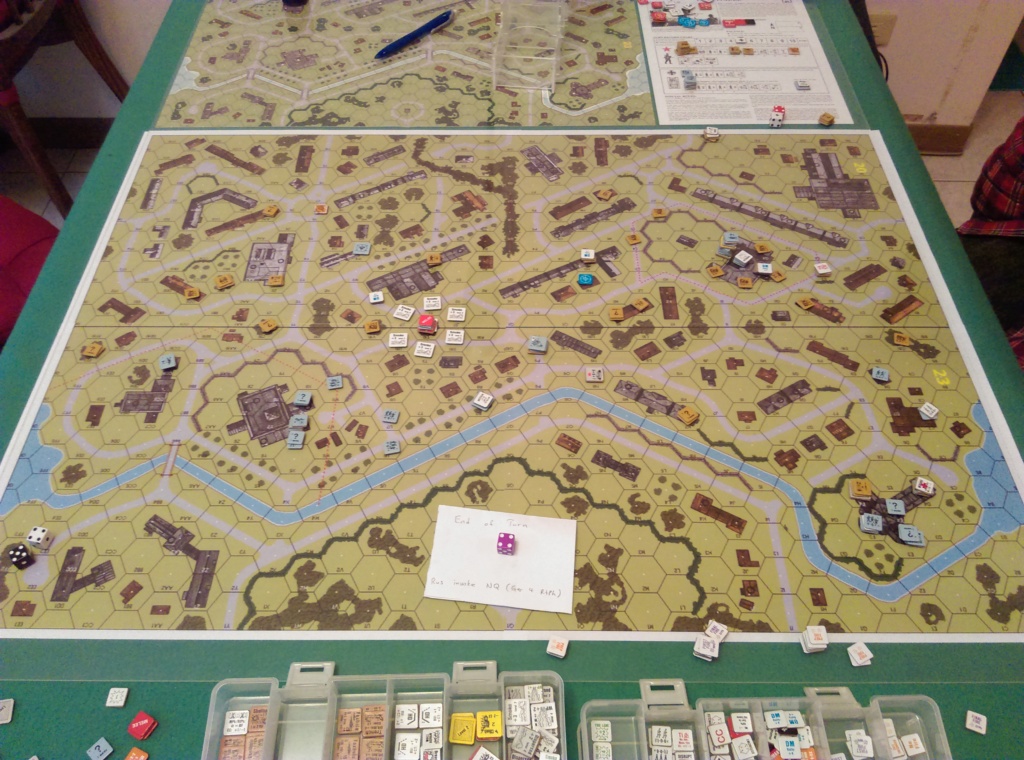 On turn 5, my relief progress is slow, but I do at least manage to eliminate the 23T10 Armored Cupola in CC. The Russian movement dr is ‘3’, and they are able to take back the 20H3 stairwell, encircling all my remaining defenders (4.5 squads, 3 leaders). Half the game gone, and no sign yet of the Russian 9-2 and MMGs. 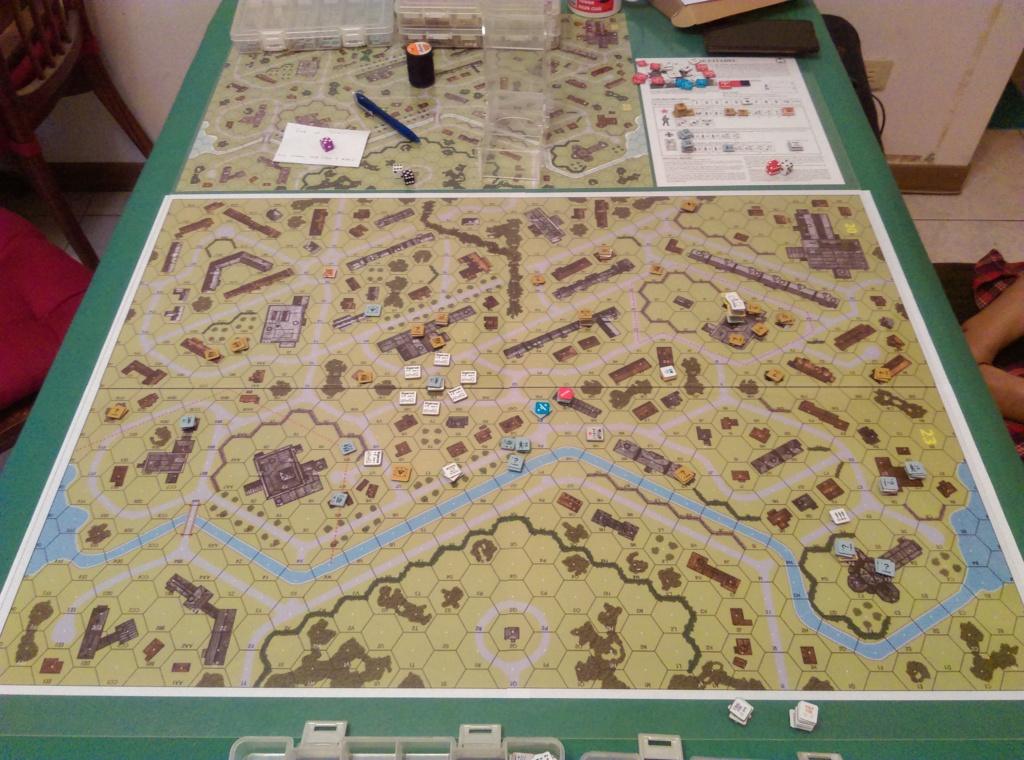 On Turn 6, I get A StuG IIIB across to the east flank group to support them, but it malfs its gun !!! The 9-2 and accompanying MMGs comes out of hiding (in 20Q2) to blast some German squads, then relocates to 20M4. The Russian move dr is ‘4’, and progress is still slow for both sides. 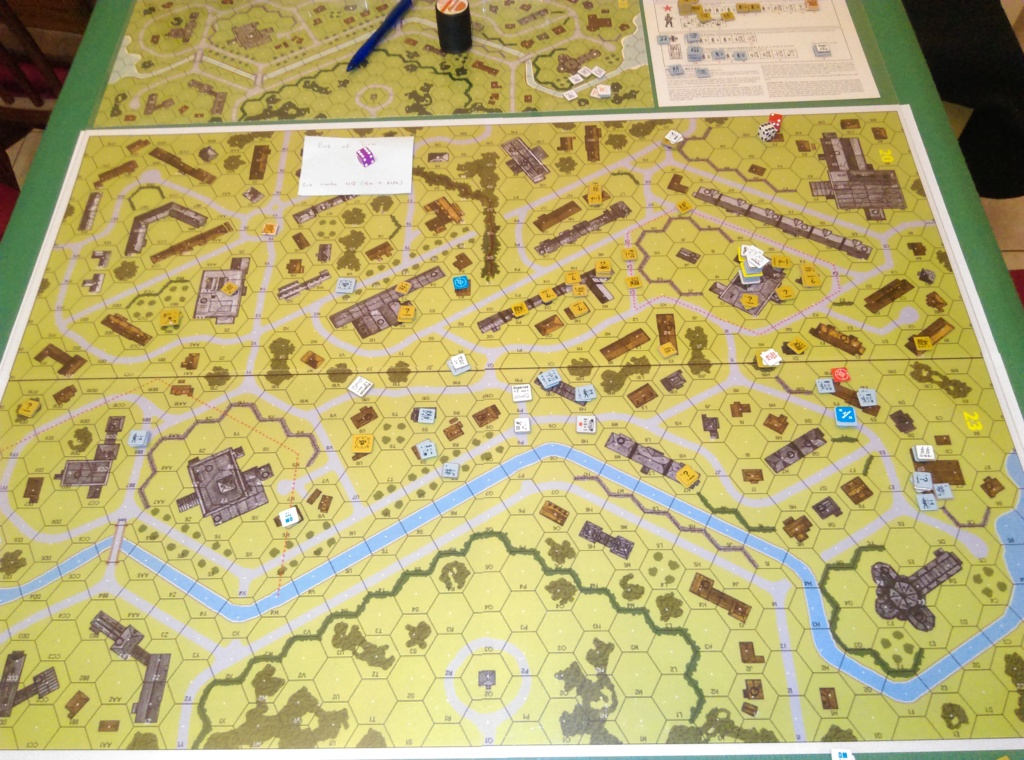 On turn 7, I am getting close to the Citadel, but the Russians get the better of the firefight, and most of my Citadel defenders break. The 9-2 has even ELRed to a 9-1, and my 10-2 leading the eastern relief group has wounded, so the only ‘-2’ leader is the Russian 9-2. The Russian move dr is a ‘1’, but the high casualties and late turn number make this less of an issue to them. I have suffered plenty of casualties, too. 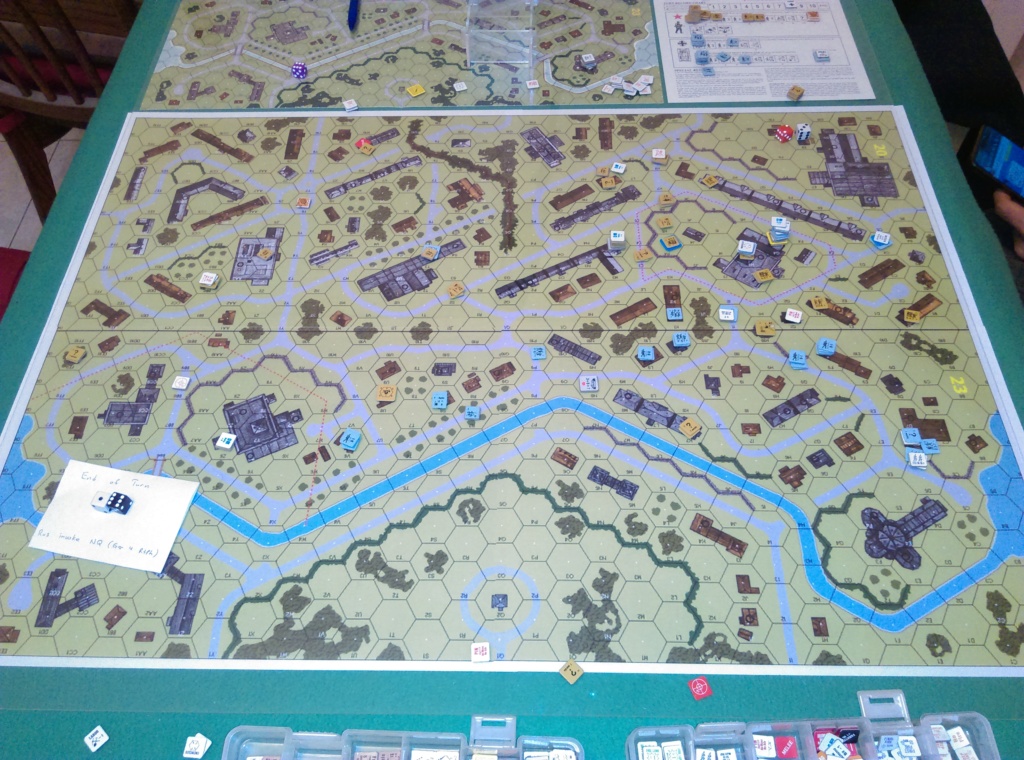 On turn 8, what is left of my relief forces push on to the Citadel. Most of my broken units inside rally, but the respite is short lived, as I am left with a lone (wounded) 8-1 by the end of the turn. The Russian move dr is ‘4’, and the Russians are able to CC both StuGIIIBs, immobilizing one of them. I will have to get reinforcements inside, or the cause will be a lost one for the Germans. 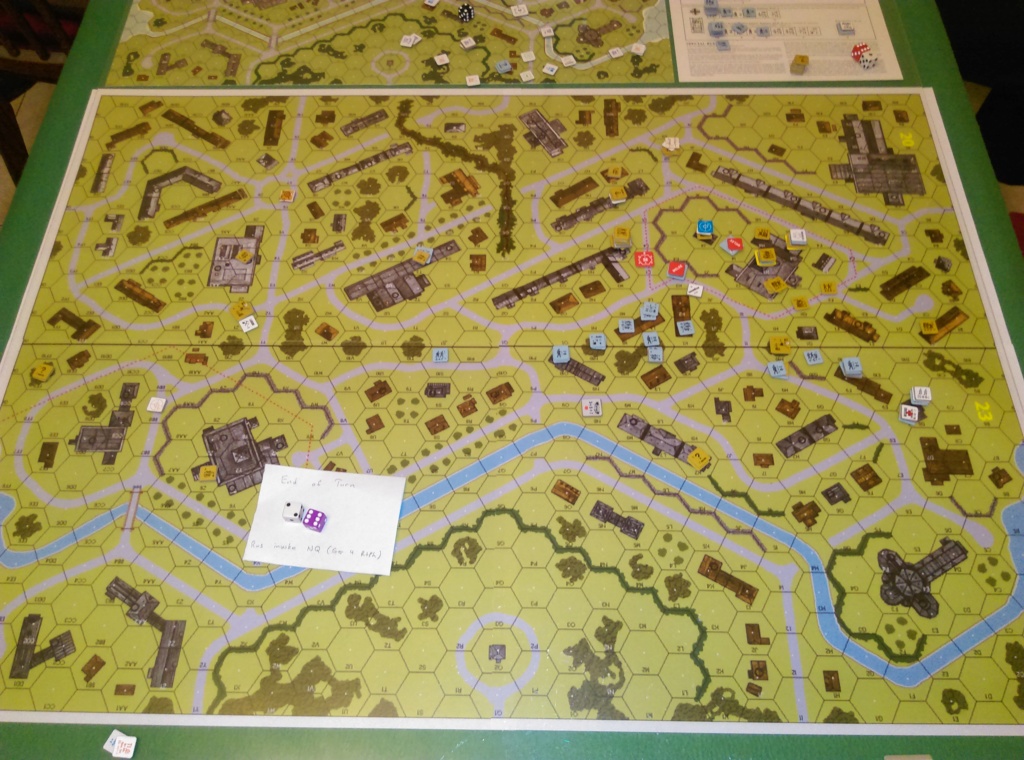 On turn 9, the OBA delivers smoke, and I am able to get some reinforcements past the 9-2 MMG stack and into the Citadel. Not a moment too soon, ans the last of the original German defenders perishes upstairs. The Russian move dr is ‘5’, and there are CCs all over the map. But few of them are going the way of the Russian. 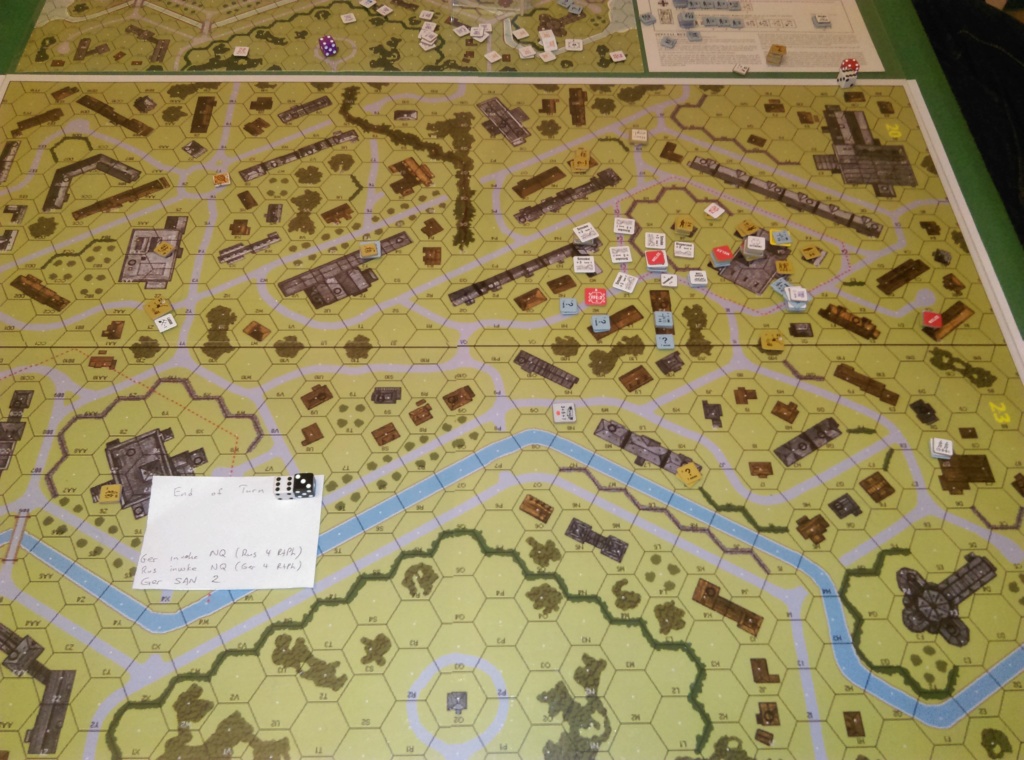 In turn 10, more Germans reinforce the Citadel, and due to the high amount of Melees, I am able to use them as a ‘wall’ to prevent Russian entry of 20H2. The Russian move dr is ‘5’, but the real issue is clearing the last Germans out of the building. The only way for the Russians to reach 20H2 is by moving adjacent in OG, and when the Russians are forced to try this, they are stopped cold, which clinches the game for the Germans. 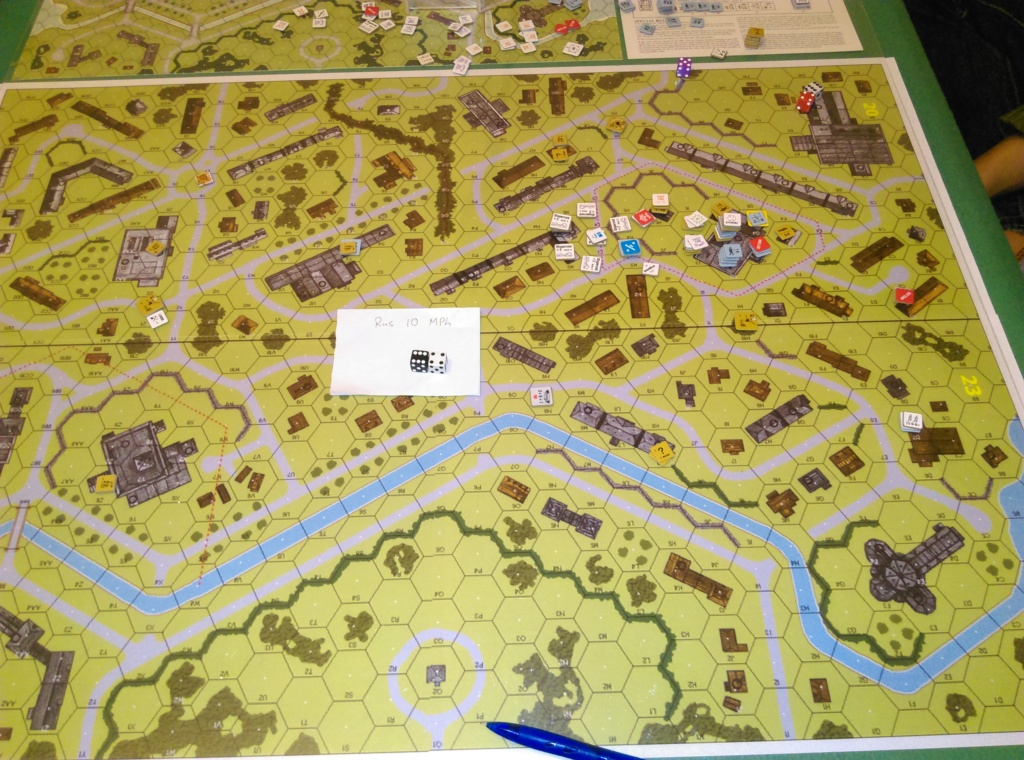 Quite an epic scenario to play. Lots going on; it really felt like 3 scenarios occurring simultaneously. I think it might have gone the way of the Russians if their 9-2 MMG group has instead started in 20M4 and assisted the assault of the Citadel from the beginning or if their CC DRs would have been a bit less bland (the Russians forgot to bring their bayonets to this fight). But nonetheless, it was a close fought game in the end.