Last Saturday, Little Wolf came to my house to play an ASL scenario with vehicles. The last scenario he played with vehicles was PA-01 “Battering Rams” at our monthly meeting at NTU in Taipei. So, I though it might be good to try something not too complex, but featuring a familiar vehicle. The scenario I chose for us was ASL-N “Soldiers Of Destruction”, with Little Wolf playing the (SS) Germans, and myself playing the Russians. German balance (adds a PSK) was in effect.

Both of the German AFVs have an excellent 88LL gun, which has a base TK of 27. Any time it hits, it will kill on any non-dud. However, defensively, they are quite different. The JgPz V has a powerful front armor (18 AF), so (except for a CH) is only vulnerable to the Russian 85L guns through the sides or rear. Being a closed top (CT) AFV, it is immune to infantry fire, and even has a CC defensive weapon (although it should still avoid CC). The PzJg III/IV is very weak defensively. It has weak armor all around (no more than 3 AF), no MGs, and is open topped (OT). This AFV should not get close to enemy squads, it is a sitting duck in CC. The German infantry have Panzerfausts (PF) with a 2 hex range, ATMMs, and good leadership. They can wreak havoc if they can get close enough. But given the lethal AT power of their AFVs, I think a better assignment for the German squads is to protect the German AFVs from enemy squads.

The Russian player needs to get a good portion of vehicles off the map, but are up against very powerful guns. The armor cannot stand up to the 88LL, so dueling the armor is very difficult. If the opportunity presents itself, the Russian player would much prefer to fight the German AFVs with Russian squads. If all 4 tanks are destroyed/immobilized, the Russian cannot win. If only 1 exits, then all the infantry needs to exit. If 2 tanks exit, then 12 points of infantry will still be needed, which looks more plausible. 3 tank exited reduces the infantry requirement to 5, and 4 tanks off is an immediate win. The more tanks off the better, in other words. As such, the Russians want to lead with their infantry, and try and sneak the tanks through.

Little Wolf set up his AFVs hull-down (HD) behind walls, with the PzJr III/IV in 4Z2 and the JgPz V in 6X9. The infantry formed a forward screen in the center of the map. I set up my Russian infantry ready to storm down the west side of board 6, with the AFVs out of LOS in a cordon to the east of the infantry. There is a 2mm sheet of plexiglass over the map. I wrote “OG” on some clear plastic sheet pieces, which I slid over the grain fields to help us remember that grain hexes are OG (in October). 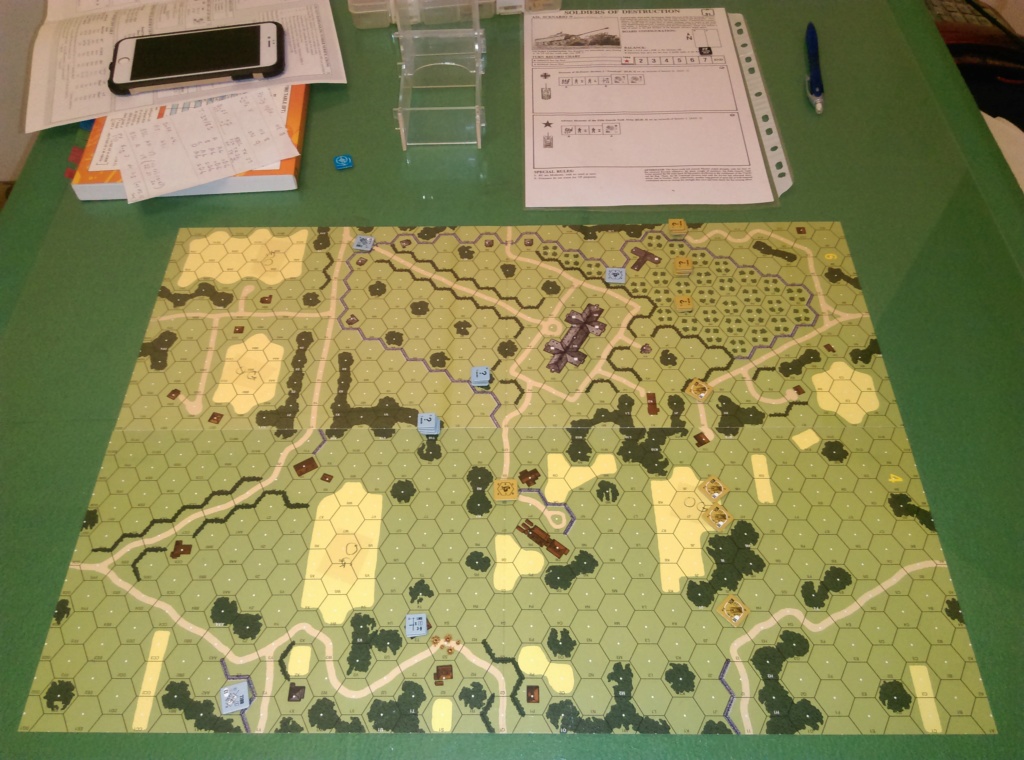 In turn 1, my infantry storm down the west side of the map, with the T-34s creeping forward, but not getting too isolated from each other. I don’t want to give the JgPz V an opportunity to duel with a sole T-34. The Germans respond with some cautious repositionings. No real contact yet. 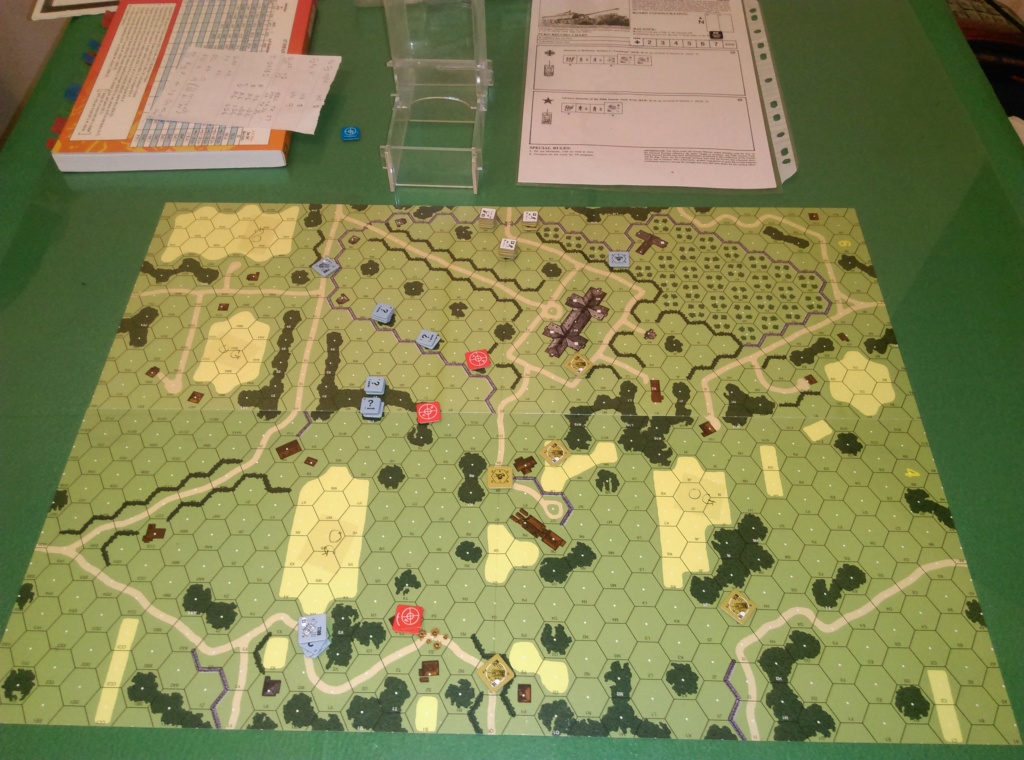 In turn 2, the Russians continue to push their infantry down the west side, with the tanks in pairs and out of LOS of the enemy AFVs, but in the LOS of the German infantry at ranges around 5-12 hexes. In the German turn, their infantry extricate themselves from the Russian AFVs, and the PzJg III/IV moves in to reinforce the row Y road on board 6. 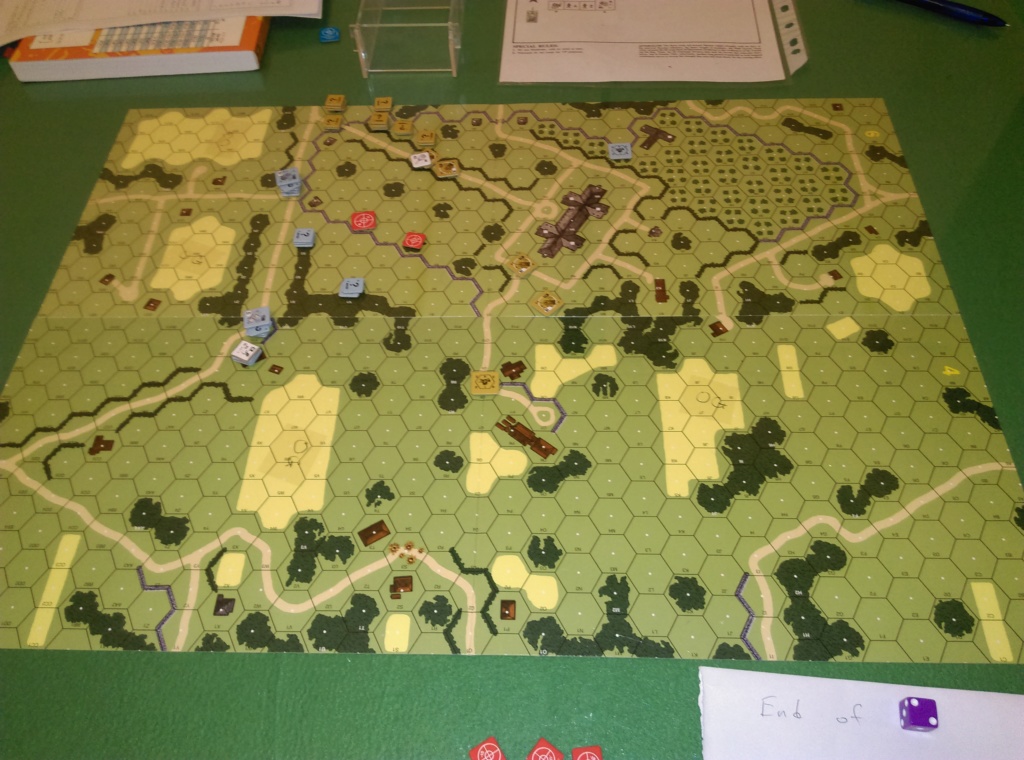 In turn 3, I decide to try and dash across the row Y road. The JgPz V misses, but the PzJg III/IV needing TH9+5 rolls a ROF hit, and burns 1 T-34. Whilst I’d have preferred it to miss, the resulting burning wreck offers good cover for my infantry, and my 628s surge southward. I might have done better, but my MCs/PTCs are lousy. To help them out, I rush the gauntlet with a second T-34, but the PzJg III/IV roll a critical hit, burning a second T-34. However, the [1,1] DR generates a SAN, which recalls the PzJg III/IV, alebit a bit too late… By the end of the turn, my infantry are bunched around 6Z10, and my 2 remaining T-34s are pushing down board 4. However, the JgPz V moves in to engage them. 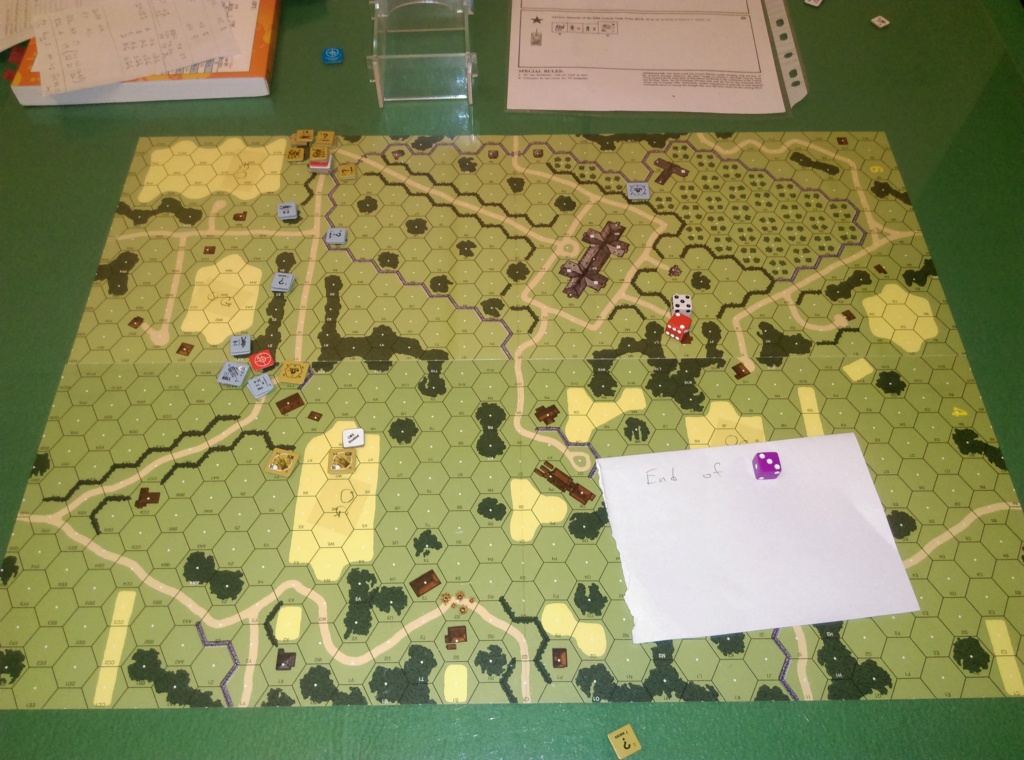 In turn 4, I have to run the gauntlet once more, but when the JgPz misses with its first shot, I now get an opportunity to fire 4 times (2 APCR attempts, 2 normal AP if the APCR fails) at the side of the JgPz V, but disappointingly, I cannot get a single hit. I really cant afford to lose another T-34, so both exit, leaving the infantry by themselves, but only needing another 12 points to win. With the demise of the German 9-2, and the 8 morale of the 628s, I still have a good chance. But even with cautious moves, my infantry just cannot pass a MC/PTC. 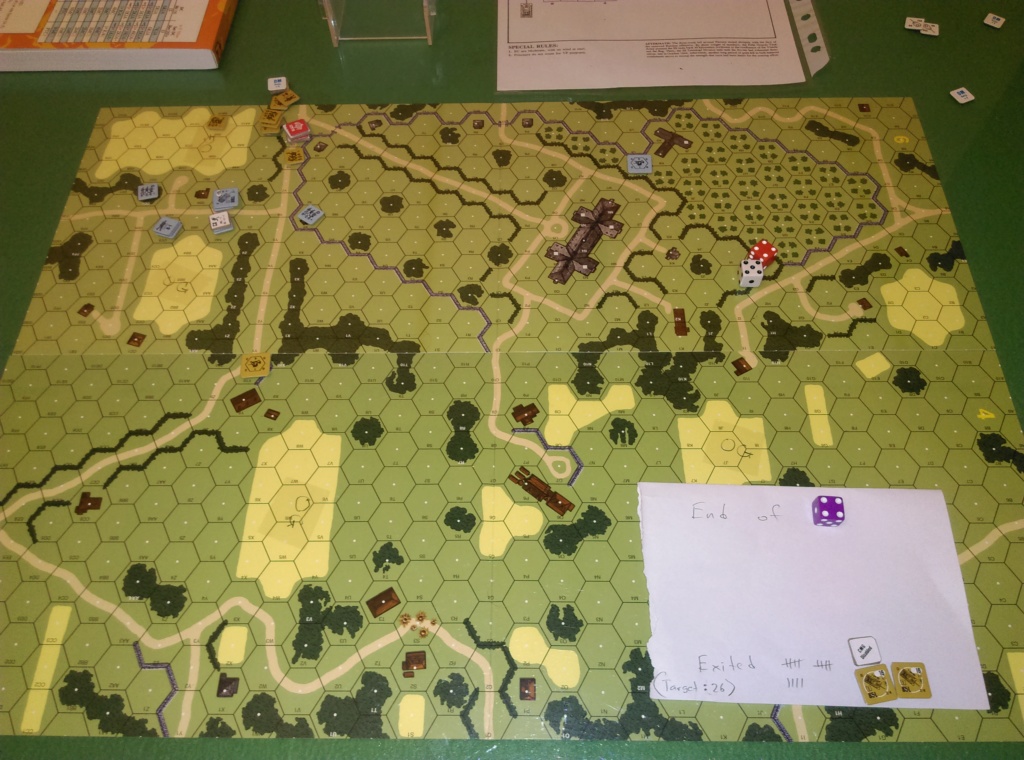 In turn 5, I manage to repair nearly all of the damage in the RPh, and once again, I try cautious moves, but my bad MC DRs continue to halt me. Time is beginning to run out for me. 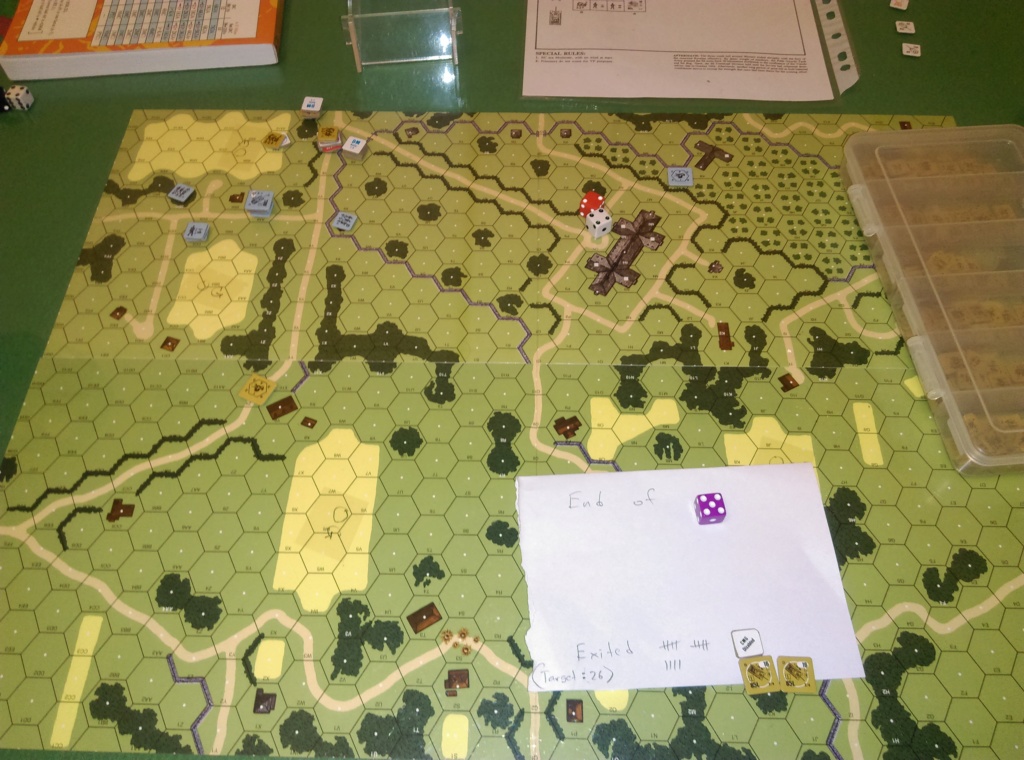 In turn 6, I rally a few (including a HOB Berserk result), but a leader and 2 squads remain broken. I need to get virtually everyone currently unbroken off with only 2 turns to go. The Berserk charge will determine my fate. At first it gets through most fire, but the last shot before it reaches CC is from the JgPz V’s BMG, and it KIAs the berserk squad, which clinches the game for Little Wolf’s (SS) Germans. 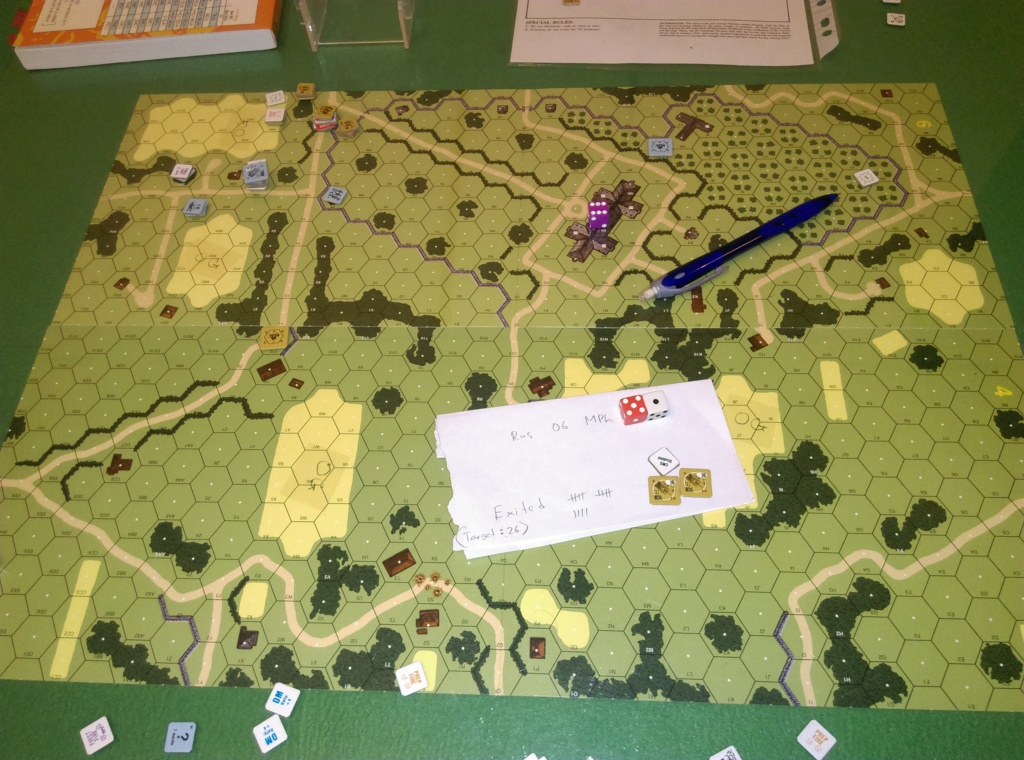 This was a fun scenario to play, the gunnery of the PzJG III/IV was clutch when the Germans needed it to be so. I had my chances vs the JgPz V, but just couldn’t get a hit. If I had knocked out the JgPz at that time (turn 4), then I could have kept the T-34s on the map and supported the infantry. But with the JgPz V stil alive, I really had to leave. For those wanting a small, simple AFV scenario, this old classic is still an easy one to recommend.