Last Saturday afternoon, Little Wolf came over to my house for some more ASL AFV training. This time, I wanted Little Wolf to undertake an AFV infiltration mission, so the scenario chosen was ASL-127 “Land Leviathans”. Little Wolf played the attacking Russians, whilst I played the defending Germans with Russian balance (substitute a 9-2 armor leader for the 9-1) in effect.

(I played this scenario vs Robin Chung about 9 months earlier)

It seems to be quite a modest assignment in my mind, given that the Russians have 11 AFVs to the German's 5, which means that the Germans need to immobilize/eliminate 9 AFVs (unless the Russians malfunction and fail to repair MAs). With 7 turns available, and Inherent crew morale of 9, there's plenty enough time to exit, and the Russian AFVs match up quite favorably with the German AFVs (except for the BA-6 perhaps). I was going to need plenty of guile and luck to stop the Russian juggernaut !!! 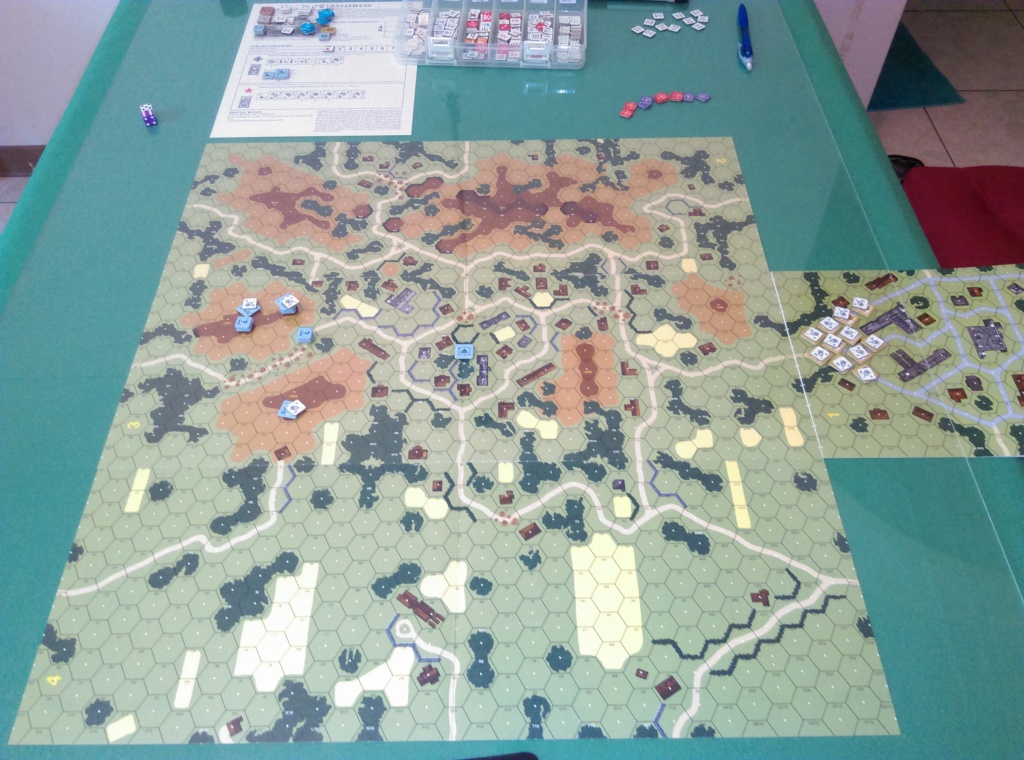 On turn 1, Little Wolf had the BT platoon head north, around the board 2 hills. The rest headed south towards board 4, basically with virtually everyone out of LOS. In the German turn, the infantry move into the central portion of the board 3 village. 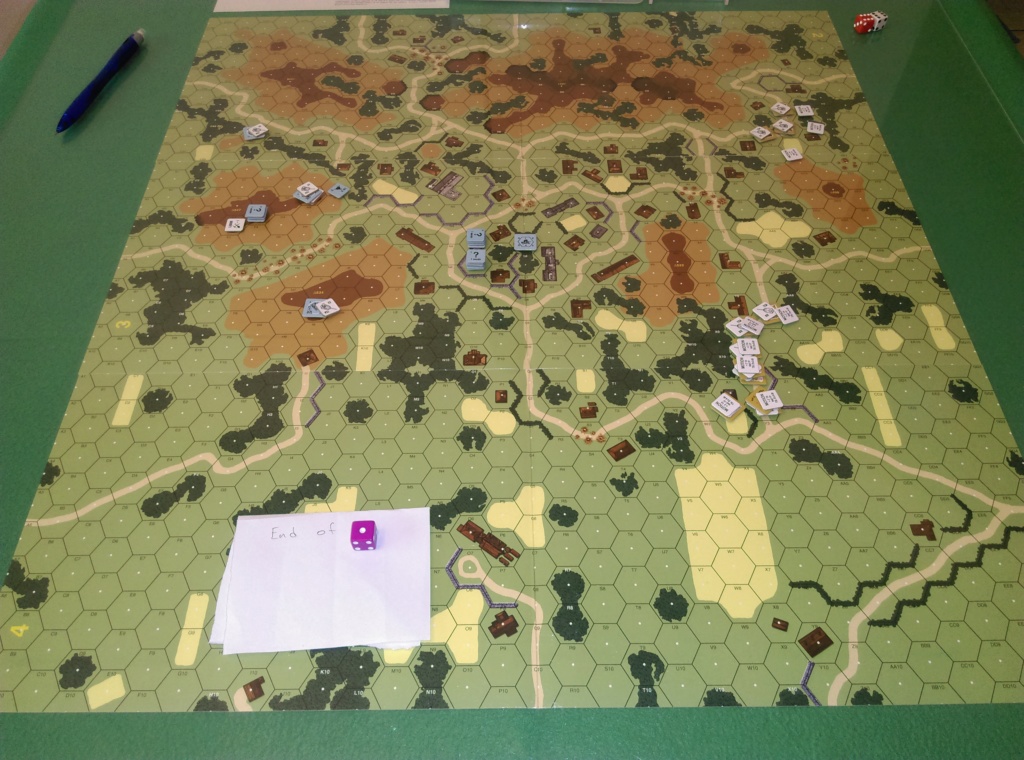 On turn 2, the BT-5 M34s continue to move around the board 2 hills, a pair of T-26 M37s head to ascend the board 3 level 2 hill in row W. The T-26 M34 fails its non-platoon move TC, and the rest advance down board 4. A PzIIIF burns a T-26 M37 with a Critical Hit (C3.7), which is the only damage inflicted thus far. In the German turn, my 2 reinforcing PzIVDs look to interdict the exit of the BT platoon. 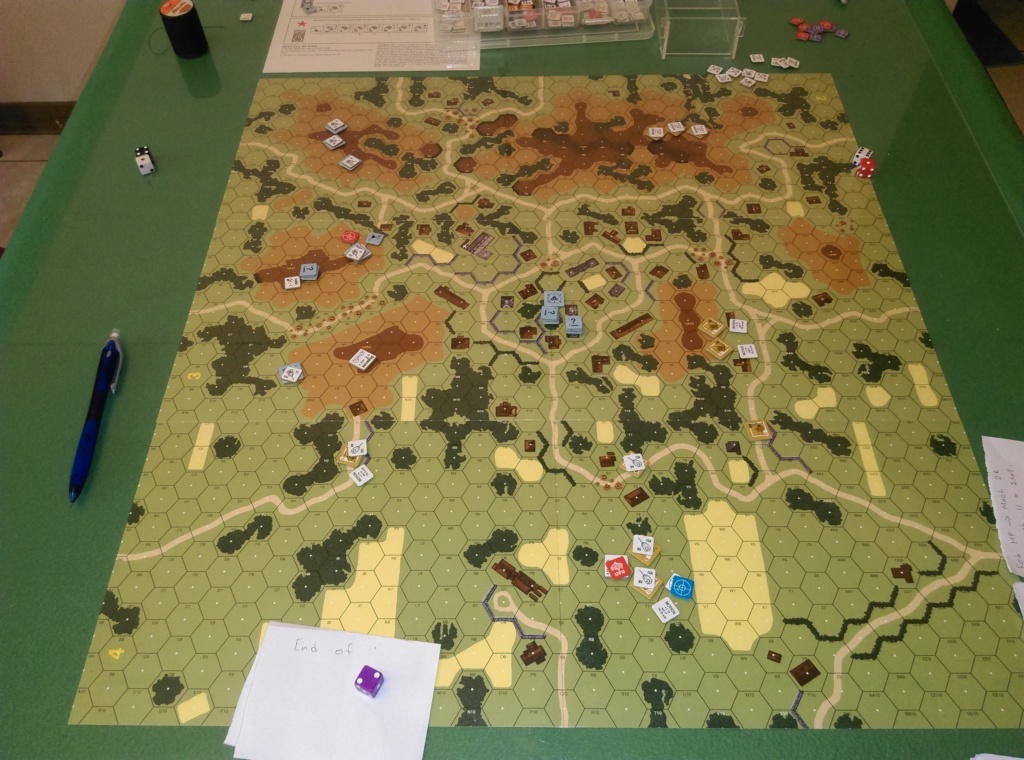 On turn 3, My PzIIIFs get another Critical Hit, albeit against the modestly armored BA-6, which is knocked out, but he Russian crew survives !!! The Russians now have some infantry on the map !!! A pair of T-26 M37s duel the PzIVDs from long range. The PzIVDs get many hits against the Russians with some impressive ROF tears (7 non-IF shots in 1 fire phase !!!), but no damage is inflicted. I expect that Little Wolf was trying to invoke some kid of distraction to open a gate for the BTs to exit, but the PzIVs held their ground and kept the discreet BTs honest. In my turn, the KV-2 gets a hit (in no small part due to the 9-2 armor leader onboard), which wrecks a PzIIIF, and once again the crew survives (my 10-2 armor leader no less). If I can continue to go 2:1 in knocked out AFVs, I’ll be happy with that.

On turn 4, Little Wolf pushes for an exit, down board 4, while the BTs continue their game of cat-and-mouse with the PzIVDs. My infantry charge the Russian tanks in vain hope of getting into CC, but make no progress. I get all that can to interdict board 4, immobilizing a PzIIIF on a ESB to stop (well - we did stop). With 1 37L gun disabled, I only had 1 functioning 37L and a 10-2 directed HMG to interdict board 4. 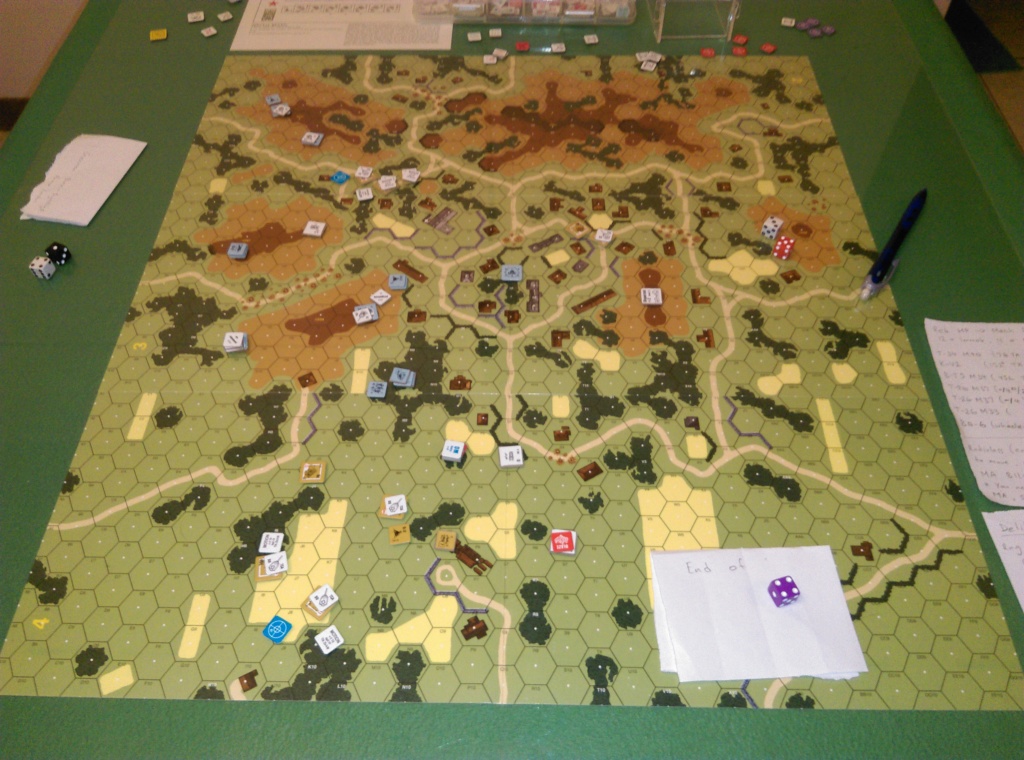 On turn 5, the Russians make a run for victory. The BTs scoot from cover to cover, one gets SHOCKed, but another exits the map. My 37L and HMG fail to get any hits vs the board 4 traffic, and when a pair of T-26 M37s exit, the Russians have clinched victory. 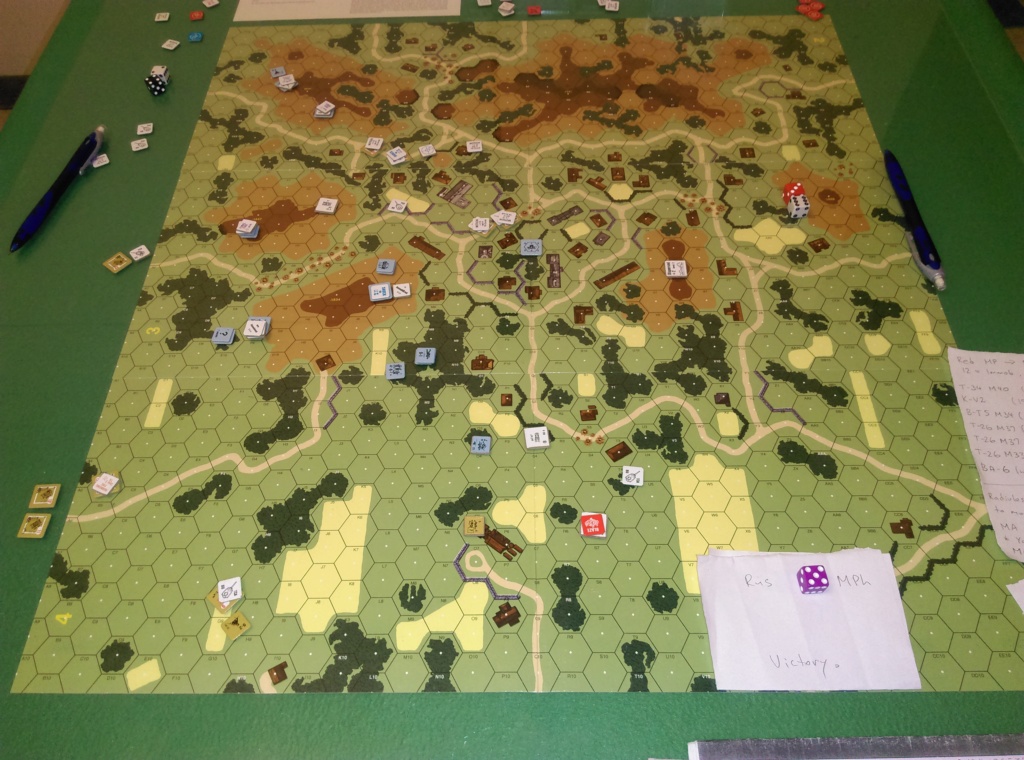 I was a fun scenario to play, and I thought that there were several moments where Little Wolf used effective tactics, which was most pleasing to see. Good game Little Wolf, you are finding your feet well !!!!