With the Russians setting up a mere 19 hexes from their exit area with 13 turns to play, it would seem simple enough, but the Finns are well prepared. Although the Russians outnumber the Finns by 26 squads to 12, when their FP is compared, its 104 to 72, which isn’t much of an advantage when one also considers that the Finns have better morale, are Stealthy, and the Russian ELR of 2 is a real liability. The Deep Snow (E3.73) really slows down movement, especially on the board 2 hill, and the wire and mines also make movement difficult and dangerous. However, the Russians can form some powerful fire bases with their MGs and leaders, and with some ROF tears, can wear down the Finnish squads. The Tanks can also provide useful support, especially in the form of mobile cover, but their 11 MPs and lack of radios make them relatively slow and ponderous.

In this game, Robin played the attacking Russians, whilst I played the defending Finns. Russian balance (mines can only set up in rows P and Q) was in effect. From the start, I went for maximum deception, with all 6 HIP squads on or around the board 2 hill. 2 half-squads and a lone leader set up deep on board 2, and the rest set up protecting the board 5 forest. The wire was set mostly along row Q, and roadblocks went in 2D5 (fa E6) and 5H3 (fa I4). The surprise was obviously total, as Robin had set up virtually all of the Russians in anticipation for pushing along board 2. 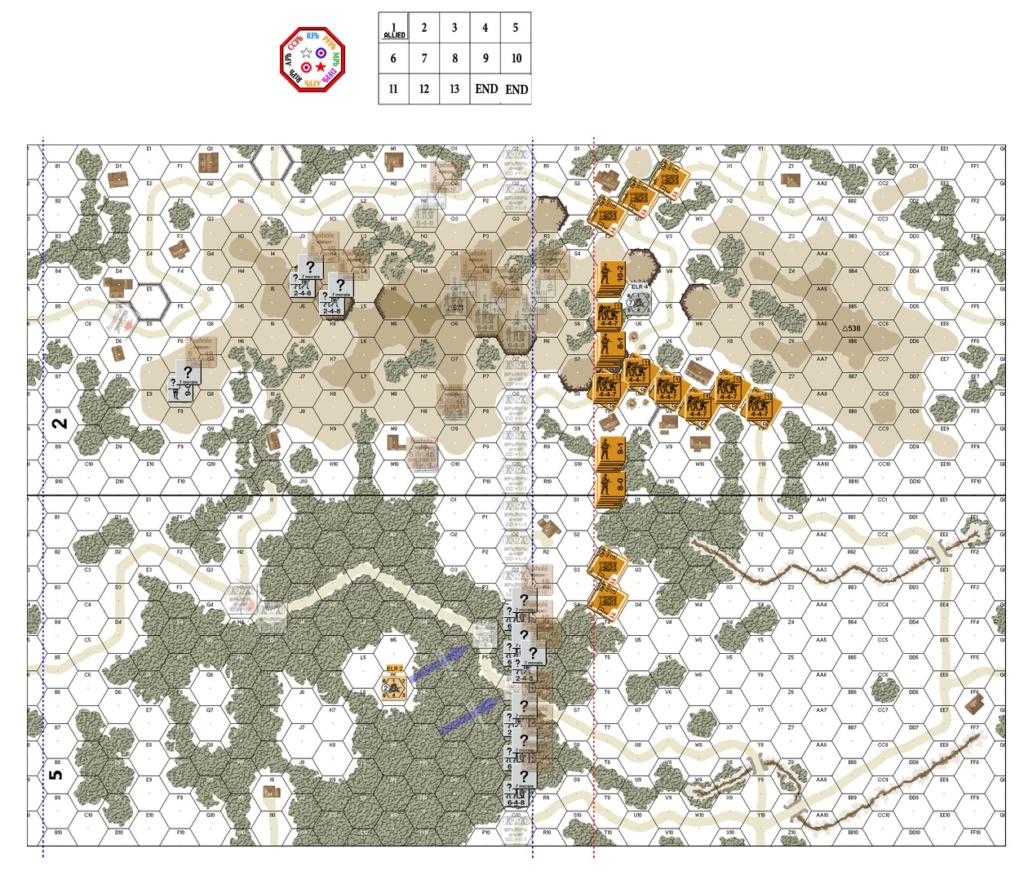 In turns 1 and 2, the turn 1 Harassing Fire 120mm FFEs (SSR 6) inflicted no actual damage, as was also the case for Robin’s turn 1 PFPh. His moves were (and could only be) slow and cautious, but nonetheless the Finns wrought some heavy damage on turns 1 and 2, with the Russians losing 7.5 squads, 2 trucks, and an 8-1 leader, with the 10-2 being wounded, and an immobilized T-26 for 1.5 Finn squads and a wounding to the 10-1 leader. The Russian attack had got stopped cold. 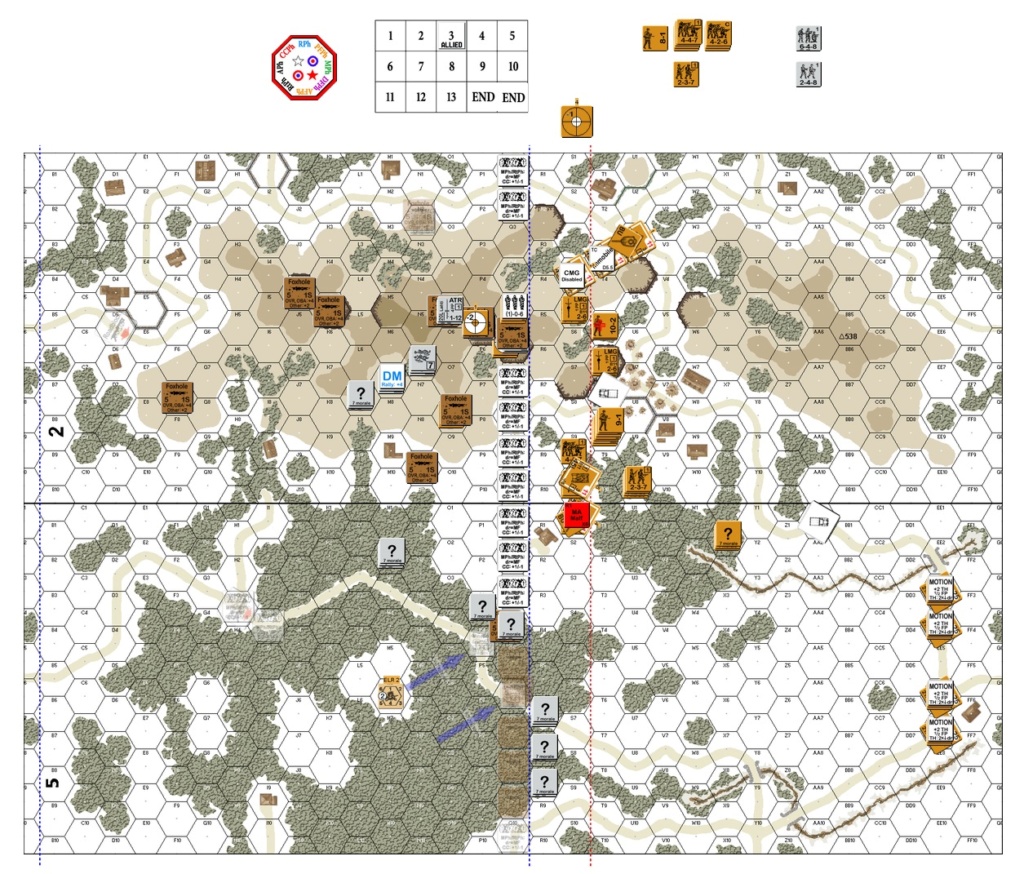 In turns 3 and 4, the Russians re-grouped and tried to continue pushing westward, but their progress was rather unimpressive. Another 3.5 squads and 2 trucks were lost for a lone Finn half-squad. A few Russians had now made it under the wire, but the Russians were looking close to being spent. 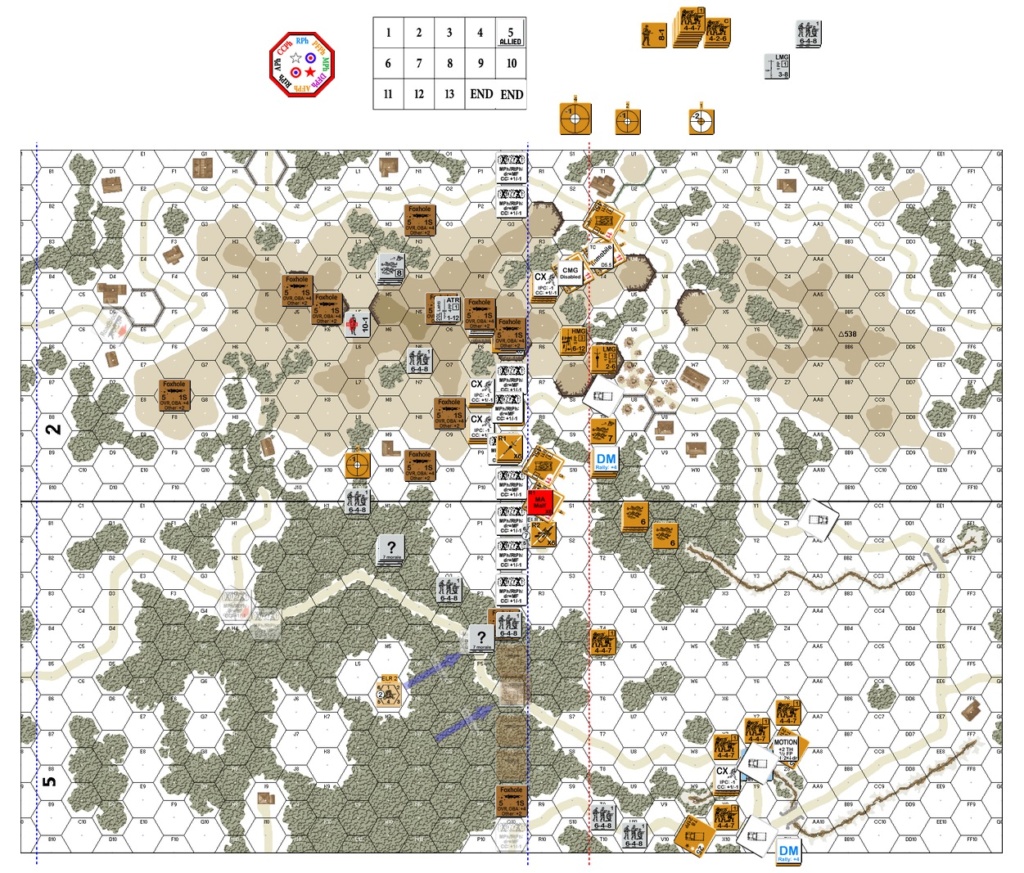 In turns 5 and 6, the attack continues, but 2 more squads and one truck were lost, along with a second T-26 immobilizing (on a Mechanical Reliability DR of 12). The Finns meanwhile had lost another squad. The remnants of the Russians were in scattered groups and not at all looking likely of exiting. We counted that the Russians had 50 VPs remaining (54 including a Finn squad prisoner), and Robin felt that it would be virtually impossible to exit close to all of what remained and understandable conceded. 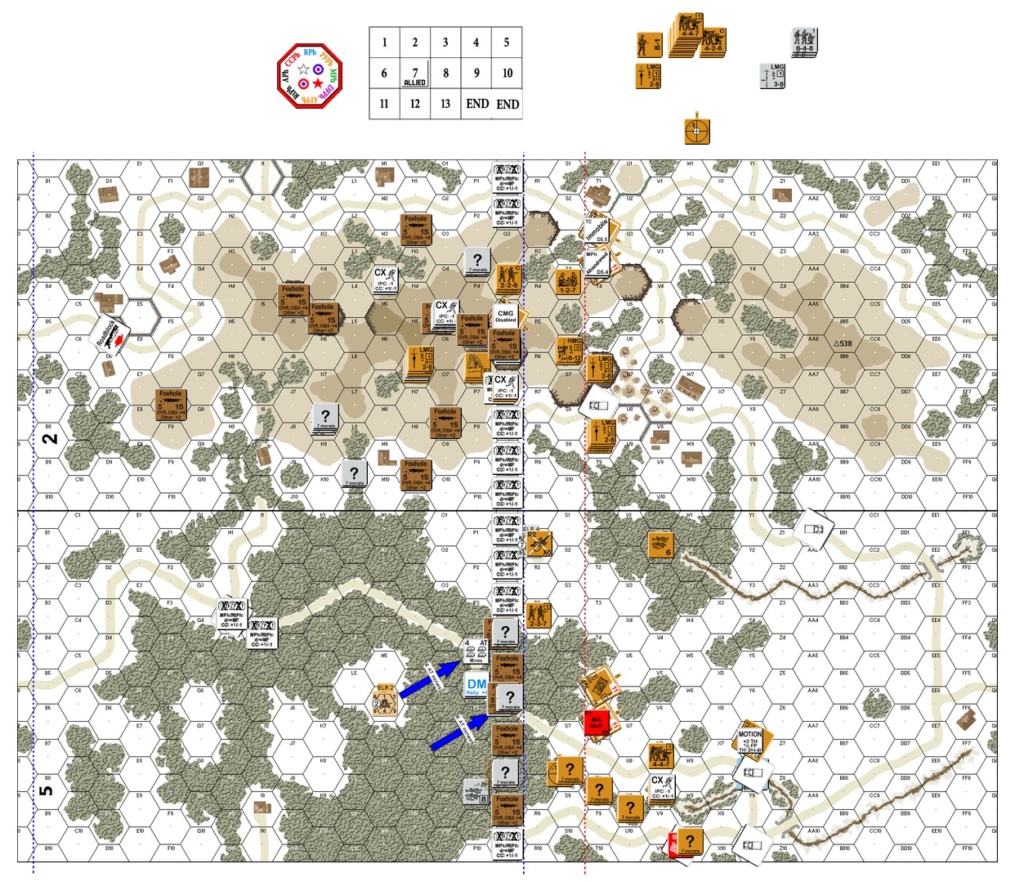 It was a short and brutal game where the Finn firepower just cut the Russians up. The Russians were able to hurt the Finns, but in most cases, they could self-rally and be back in the line before long. Meanwhile the Russian ELR 2 saw a lot of Russians suffer Unit Replacement (A19.13), and 2 of their remaining 3 leaders were wounded. Still, it was fun to play this old classic, and I can see that Robin was able to grasp some of the challenges of attacking in Deep Snow (E3.73) versus a prepared position.