Last Sunday, we had our monthly meeting at N.T.U. in Gongguan. We had 5 players that day (Robin, Roy, Neo, Little Wolf, and myself), with Robin tutoring for Roy and Neo for a couple of Schwerpunkt scenarios, whilst Little Wolf and I finished our scenario of ASL-125 “First Crisis At Army Group North” that we began the previous weekend. After completing that scenario, we started and finished another, J-082 “Pavlov’s House”.

ASL-125 “First Crisis At Army Group North” is played on boards 4 and 5 and depicts a Russian armored infiltration. The Germans defend with 4 squads, 2 leaders, 4 SWs (including 2 DCs), 3 PzIIIG tanks, 2 SPW251/1 half-tracks, a 9-2 armor leader, and a crewed 37L AT gun. On turn 1, the Germans are reinforced by a leader, and a SdKfz 7 carrying a crew and 88L AA gun. The Russians attack with 8 squads, 1 leader, 2 SWs, 3 KV-1 M39 tanks, 2 T-26 M37 tanks, and 2 BT-7A tanks. The Russians have 8 turns to win immediately by exiting 3 AFVs with functioning MA off the west edge. Little Wolf played the defending Germans, whilst I played the attacking Russians. German balance was in effect (which allows the 37L to set up normally, rather than in tow as per SSR 2).

The 50 and 37L guns are too weak to expect to penetrate the armor of the KV-1 (unless using APCR at close ranges), but they are more than capable of defeating the more weakly armored T-26 and BT-7A tanks. However, if the KV-1s are within 6 hexes and not Hull-Down (D4.2), then Deliberate Immobilization (C5.7) is a worthy tactic, especially versus a ‘large’ target size (D1.72). The 2 DCs can be effective against the KV-1s if the German infantry can get close enough, but with the heavy Russian infantry screen, the opportunity to do this might be rare. But the real KV-1 killer is the 88L AA gun which arrives turn 1. With its base TK of 20, it can expect to punch through and wreck anything it hits, although getting it into position can be tricky and time consuming. The German player should also note that all the Russian tanks are mechanically unreliable (Russian Vehicular note M), so the more often that he can make the Russian tanks stop and start, the more likely that there will be a breakdown. From the Russian point of view, the light tanks want to avoid the German guns, whilst the KV-1s do most of the fighting. The light tanks can be useful in supporting the Russian infantry, especially the smoke firing 76* guns of the BT-7As, although with B11+, the Russians need to avoid low probability shots to reduce the chances of a gun malfunction. The best way of dealing with the 88L AA gun would be to launch a Human Wave at it, having worn down the German infantry support.

Little Wolf set up his infantry in a cordon across both boards, with his tanks in hull down positions behind walls.

On turn 1, my units advanced eastward as fast as they could, with the KV-1s advancing into firing positions, and the lighter tanks out of LOS. With the 37L HIP threat, I wanted to surprise the defense by creating Trail Breaks (B13.42) through the woods (we forgot about SSR3 canceling the half-MP road rate). In the German turn, the SdKfz 7 gets adjacent to a woods hex, so it can enter it next turn. Unloading a gun in the open leaves it vulnerable to Overrun (D7) and make concealment gain difficult. No fire at all on turn 1. 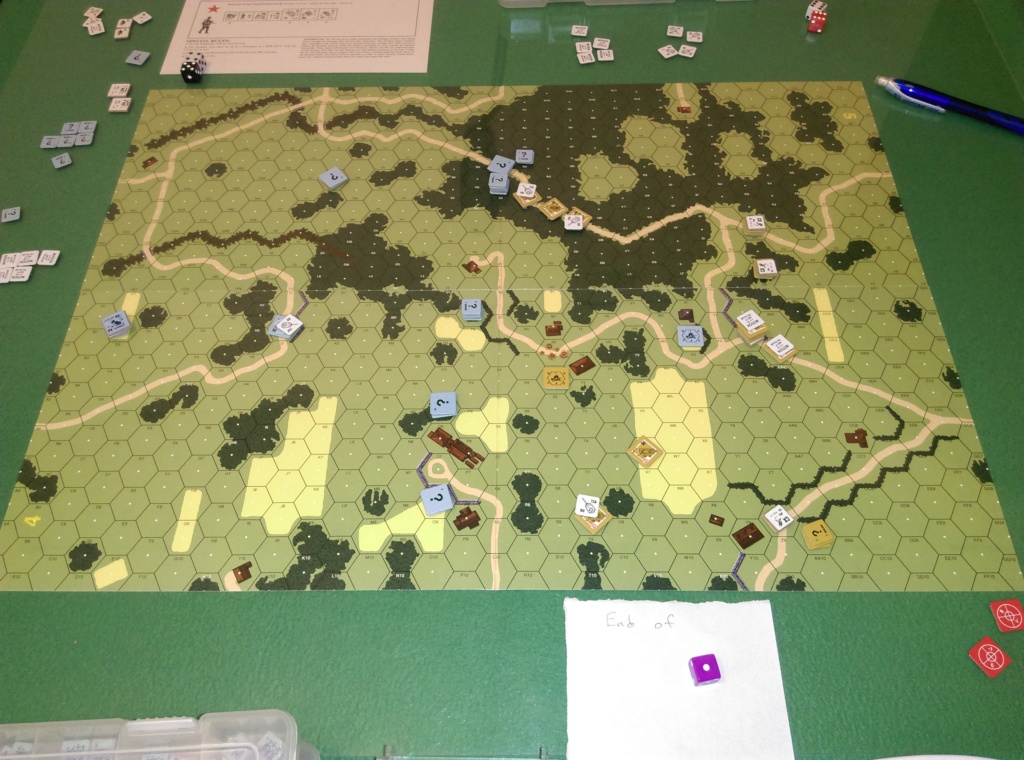 On turn 2, my tanks on board 5 use all their MPs to make a TB in the adjacent woods hex, figuring that this will afford them a better chance to out-manoeuvre the defense. So far so good. But as the T-26 platoon tries to zip from cover to cover, a PzIIIG takes a well hindered shot, but rolls low and wrecks one of the T-26 tanks. However, this consumes its ROF, so one of my KV-1s moves in for a Bounding First Fire (D3.3) shot, but the PzIIIG turns, intensive fires, rolls low, and hits with APCR, which wrecks the KV-1 (unbeknown to me at the time, that PzIIIG was not just lucky, but good. I housed the 9-2 armor leader, so those seemingly unlikely shots were a whole lot more plausible than low probability). But with all it’s ROF consumed, a second KV-1 moves in and roasts the PzIIIG with a Critical Hit (C3.7). In the German turn, a MG wrecks a BT-7a with a ‘2’ TK DR, so I am quickly down to 4 tanks. Meanwhile, the SdKf7 makes it int the woods without bogging. 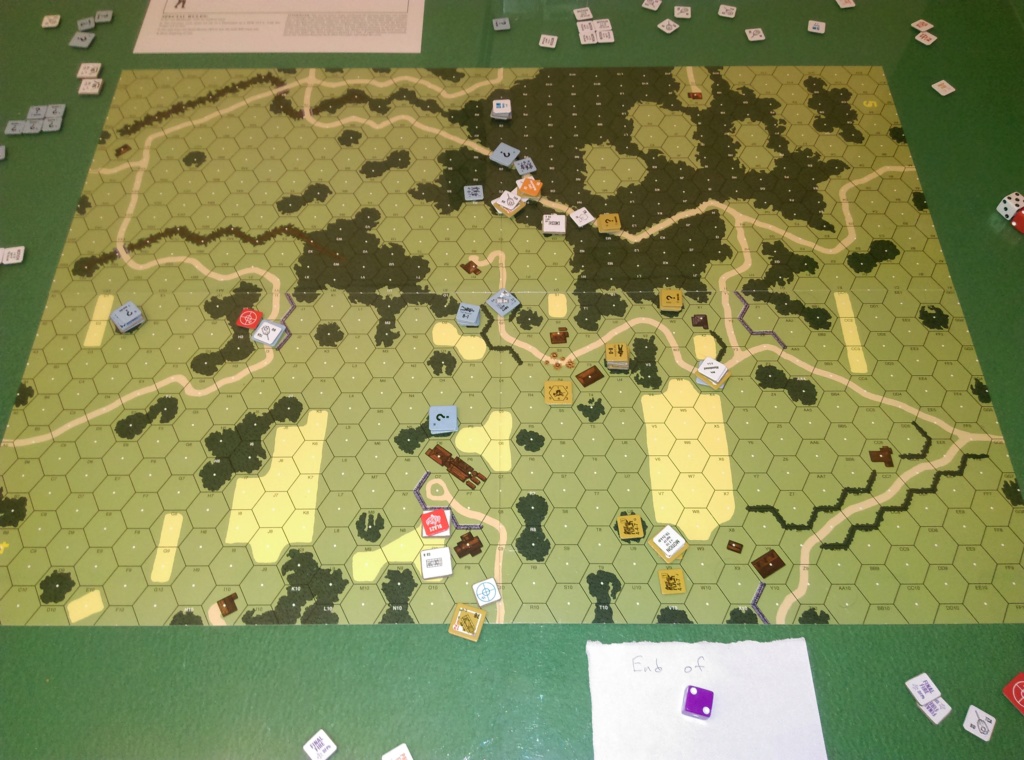 On turn 3, a KV-1 moves into a HD position to engage a HD PzIIIG, the T-26 (behind a building and out of LOS) moves up and forms a platoon with the HD KV-1, and the 2 remaining tanks on board 5 move out of the woods into the forest and wait for the infantry to catch up. In German turn 3, the HD PzIIIG disengages successfully, a less fortunate half-track gets wrecked, and the SdKfz 7 unhooks the 88L AA gun in4D1 (a single woods hex). The O8 grain field is now ablaze.

On turn 4, my infantry start to get the better of the light German infantry screen, and my plan is to form a Human Wave to overrun the 88L AA gun. Another PzIIIG is burned by a 76 hit from a KV-1, as are the 2 remaining half-tracks. The 37L AT gun is stil HIP, and I figure that it will likely wreck one of the 2 remain light tanks at some stage, so I am being very cautious with my tanks now. 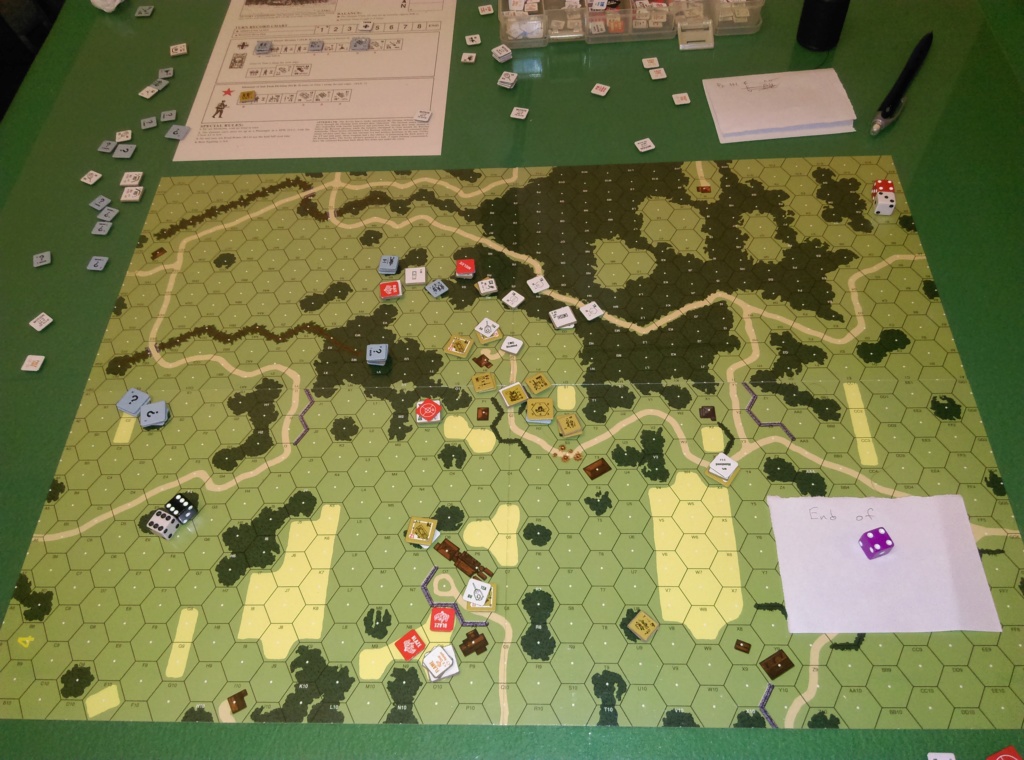 (This is where we finished 2 Saturdays ago at my home. I recorded all the positions  and the game resumed 2 Sundays later at N.T.U.)

On turn 5, the 37L comes out from hiding and wrecks the remaining BT-7A. There is now no margin of error. I cannot neither lose a tank, nor suffer an immobilization or gun malfunction. However, there is not much between my mostly intact infantry and the big AA gun. In the German turn, Little Wolf gets ‘white line fever’ and tries to engage and get a game clinching kill, which forces me to Intensive Fire, but luckily I hit (without malfunctioning) and kill the last PzIIIG. 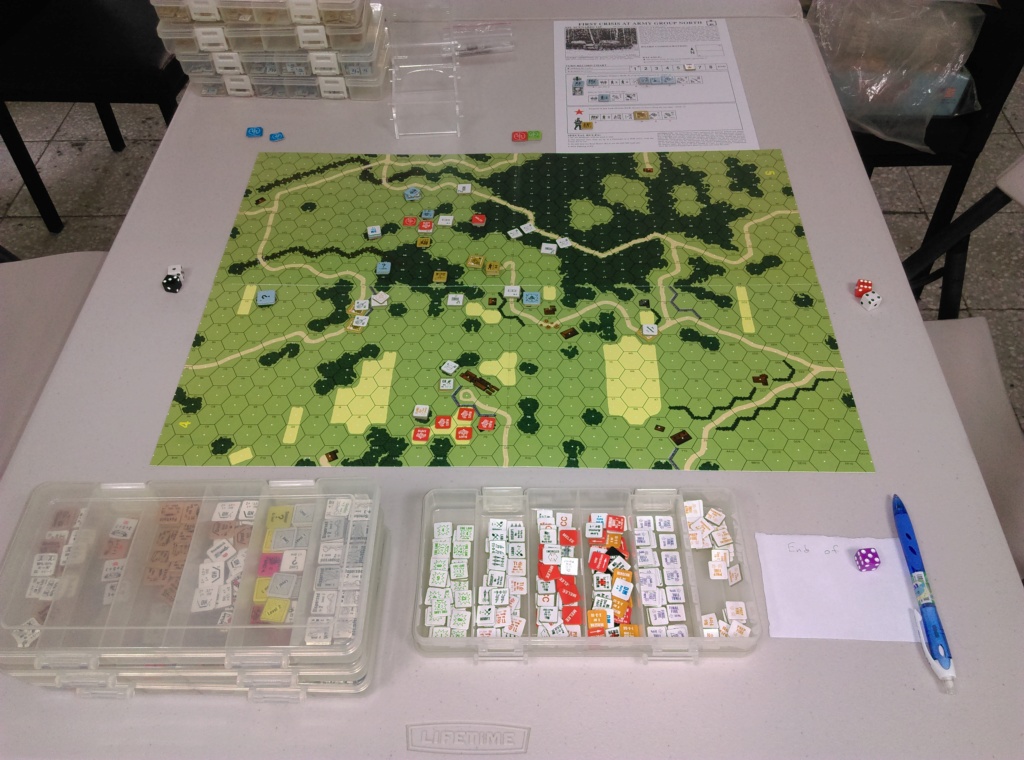 On turn 6, my remaining tanks move to board 4, and my infantry push westward. Little Wolf gets a break when one of his squads wins a melee, and this begins a recovery of the German infantry. Nonetheless I still have enough MMCs left to form up the HW. 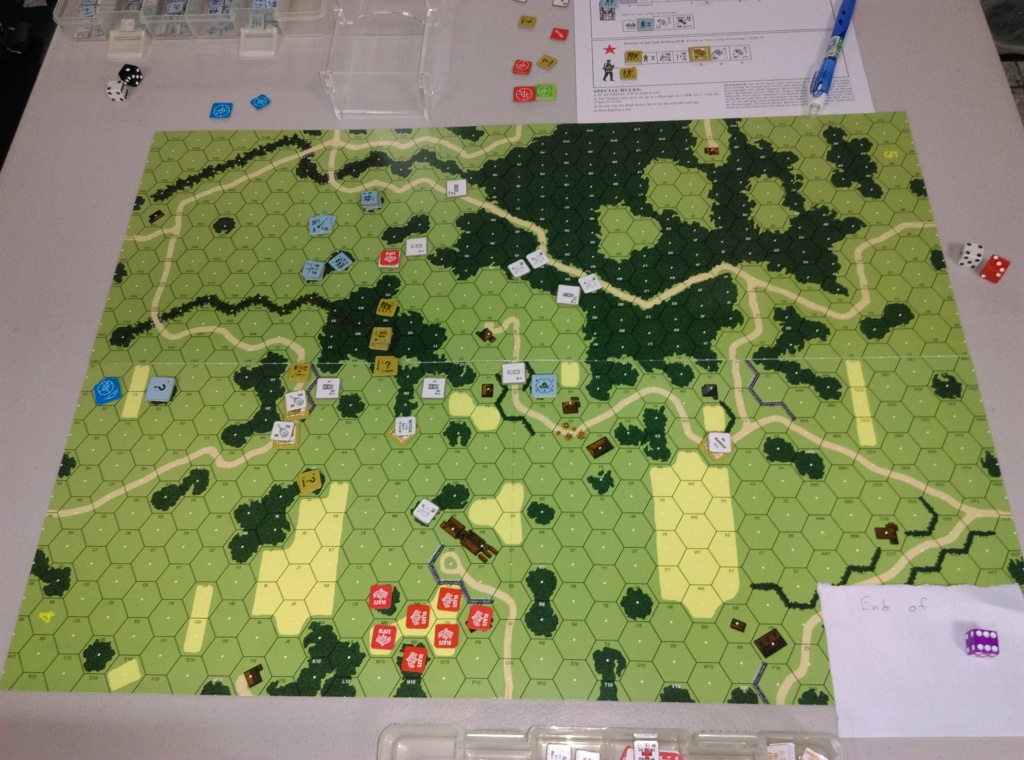 On turn 7, the infantry advance into a HW formation and all remaining vehicles move into exit positions, waiting out of LOS for the gun to be overrun. What is left of the German infantry move into position to protect the AA gun. The 37L is pushed into a covering position, but the crew breaks and takes no more meaningful part in the game. 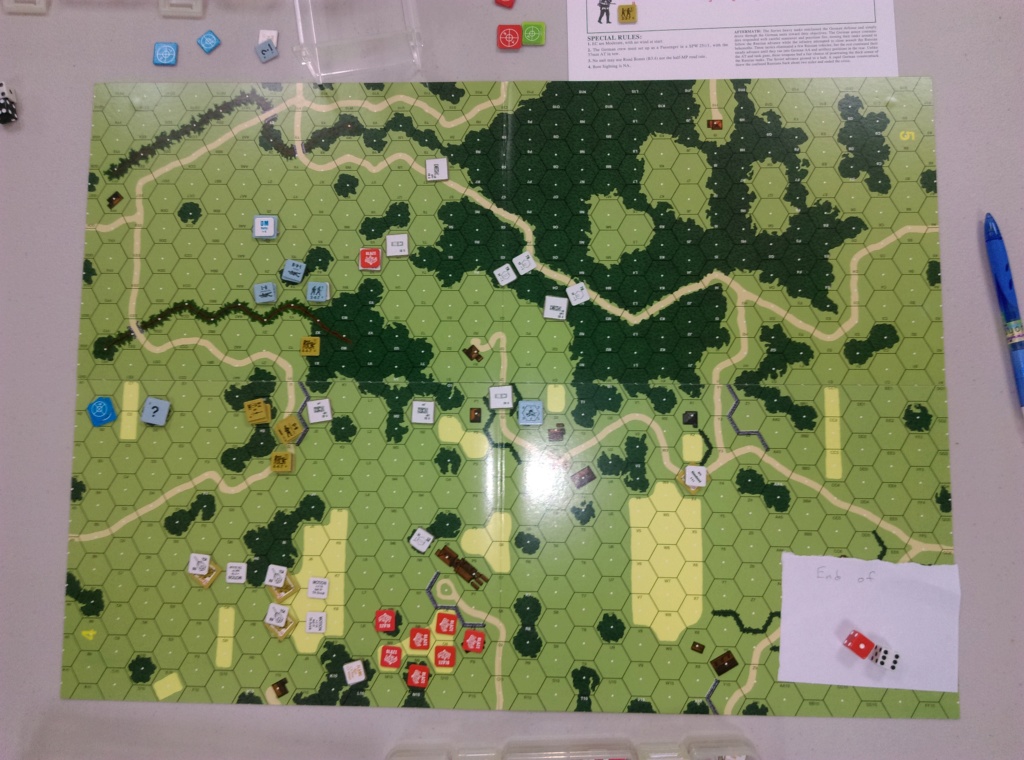 On turn 8, the Human Wave charges the AA gun. The covering German squads stop a few of them, but enough survive to force the gun to fire, which forces it to shoot. All but 1 squad are stopped, and this last squad overruns the gun’s location, and opens the game for the last 3 Russian tanks to exit unopposed. 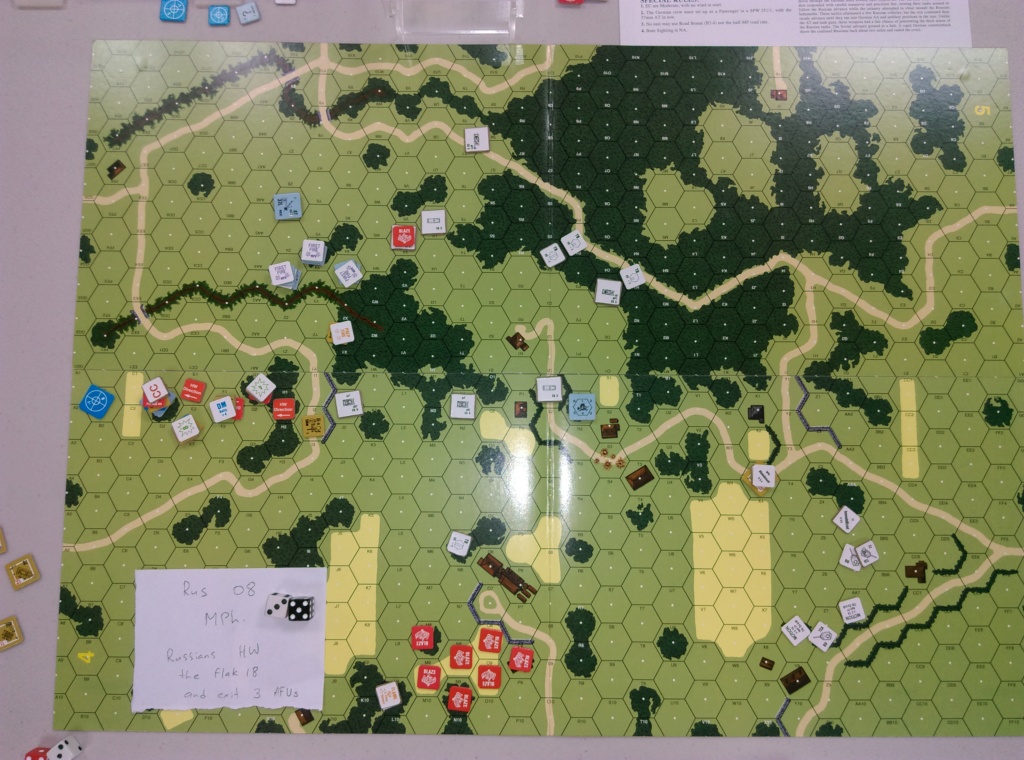 A good, close game which went right to the end. Lots of rules in play (prior to the game,  I posted a bunch of brief explanations of various rules that would likely come into play, which Robin later translated to Chinese for the benefit of the other Taiwanese players), and plenty of lessons and tactics for Little Wolf to absorb and strengthen his game.

The next scenario we played was J-082 “Pavlov’s House”. This scenario depicts a German assault on a fixed position during the battle of Stalingrad. The Russians defend with 3 (628, 2x447) squads, 3 half-squads (237), 2 leaders, 5 SWs, a crewed 45LL AT gun, and 11 “?” counters. All Russians are Fanatic (A10.8 ), and there is a level 3 location in AA7. The Germans attack with 9 (467) squads, 2 leaders, and 3 SWs. On turn 1, the Germans are reinforced with 2 PzIVF2 tanks and an 8-1 armor leader. The game is played on board 1, and a large killing ground is formed by using OG overlays. The Germans win at the end of 6.5 turns if there are no Good Order Russian MMCs in building 1Z7. Little Wolf played the attacking Germans, whilst I played the defending Russians. German balance (the 45LL AT gun cannot use HIP) was in in effect.

Without the ability to use HIP for the gun (c/- German balance), there was no ability to ambush the German tanks, so I set up the ATG deep, with a ‘dummy’ gun made from 2 5/8” “?” and 1 1/2” “?” I also had dummies in the level 3 position (feeling it would draw attention in the turn 1 PFPh from a 9-2 led MG nest. In order to facilitate quick rallying, I exchanged the 8-1 leader for a 10-0 Commissar. When possible, I will Voluntary Break to avoid CC and use the Commissar to quickly rally again. The SSR 2 pre-game 200mm OBA attack did serious damage to both buildings, with a total of 3 rubble and 2 flames created. Nonetheless, Little Wolf put the 9-2 led MG nest in Q4, with the remaining infantry mostly on the western flank, which is hardly surprising, given the dearth of cover northeast of the objective. 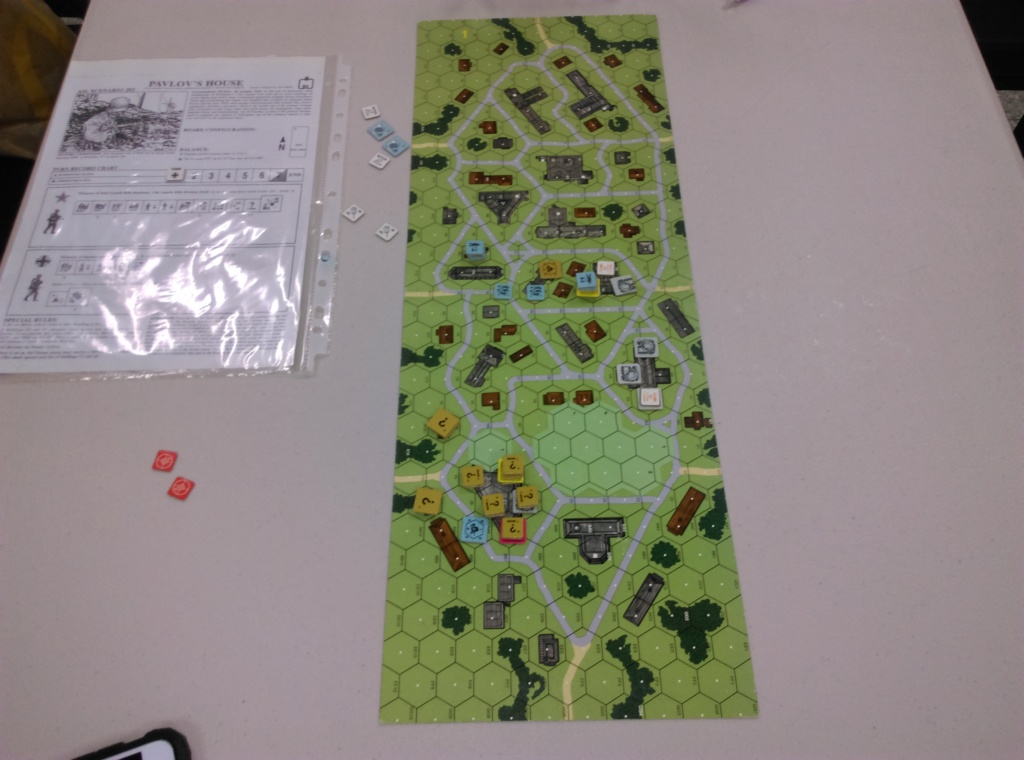 On turn 1, the German 9-2 MG nest Opportunity Fired (A7.25) and the German infantry and tanks advanced cautiously towards the VC building. No damage was done to either side. 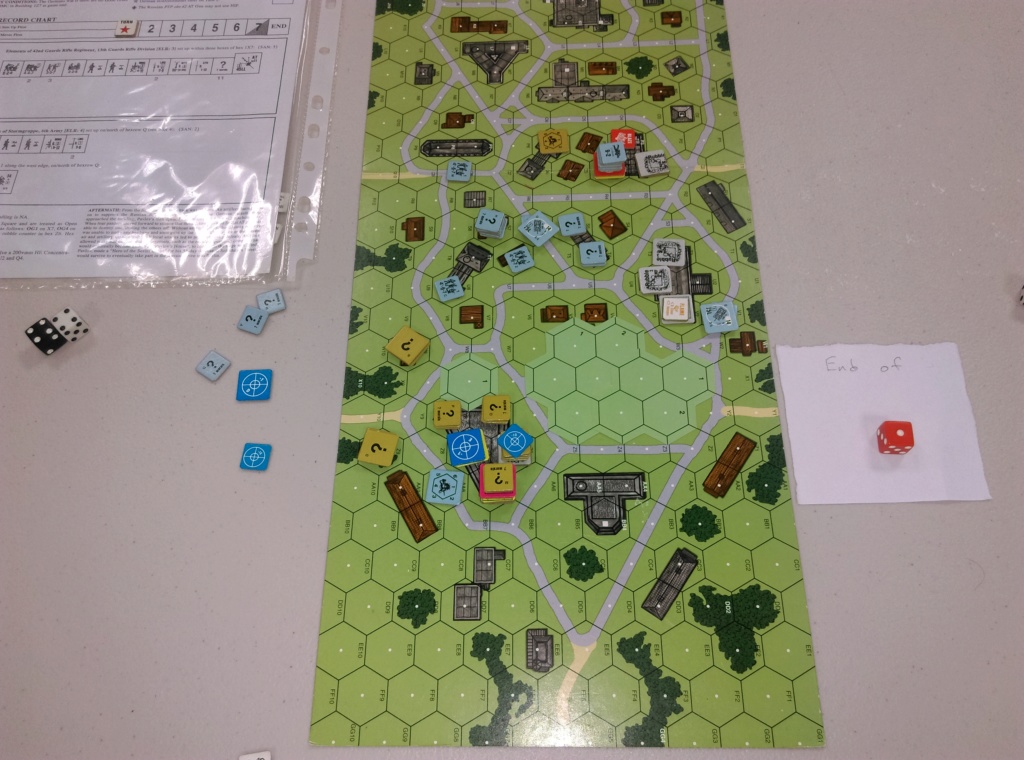 On turn 2, Little Wolf fires smoke with both tanks and continues to advance. The only unit to break is the ‘sniper-bait’ half-squad near the 9-2 led MG nest, so they did their job well. The fires continue to spread, and there are now blazes in both the U2 and Q3 buildings. 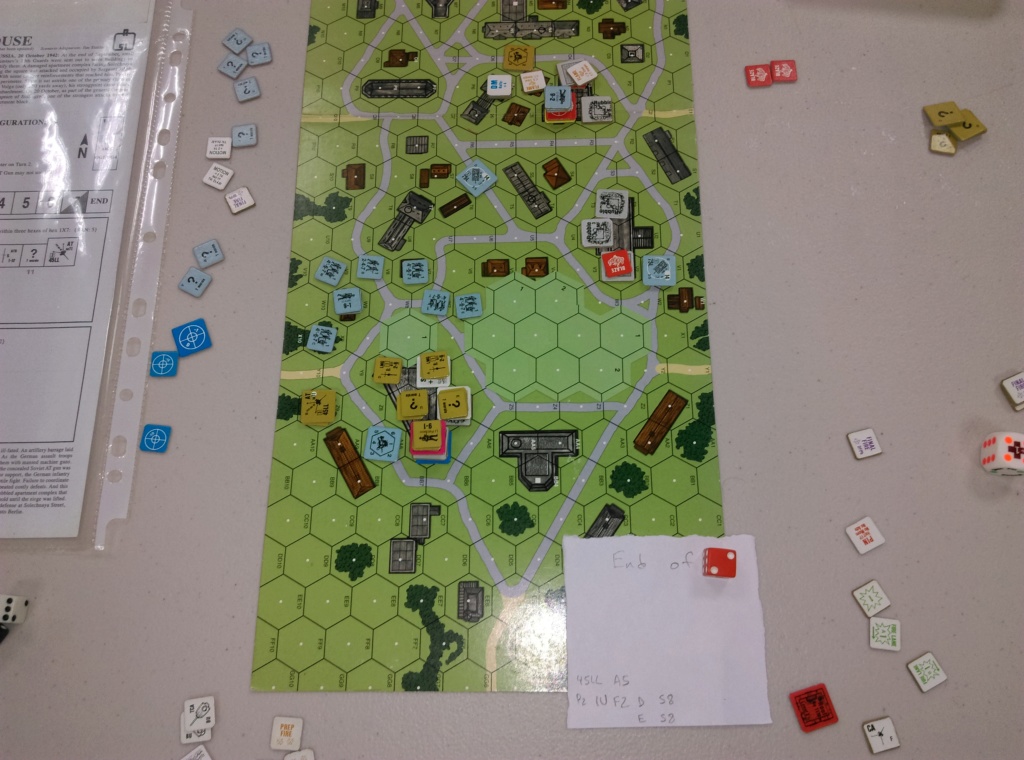 On turn 3, the Germans get a toe-hold in the VC building, but by hiding in the smoke, it is difficult for the Germans to break the Russians. The 45LL AT gun never gets a chance to fire at the vehicles, but gets several hits on the German infantry for no overall effect. The game of block the stairwells is about to begin….. 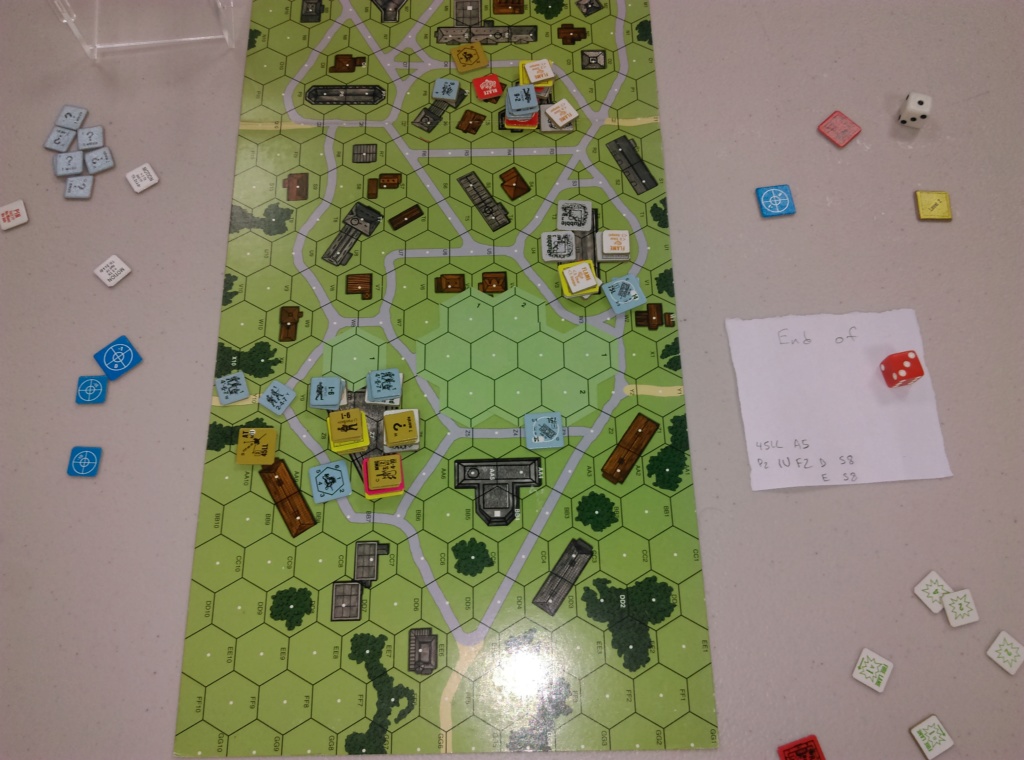 On turn 4, the Germans are able to break a number of my units, thanks in no small part by some rather non-fanatic MC DRs. Even my 10-0 Commissar broke !!! The one success I did enjoy during the turn was getting a Deliberate Immobilization (C5.7) hit on the PzIVF2 with the ATR. 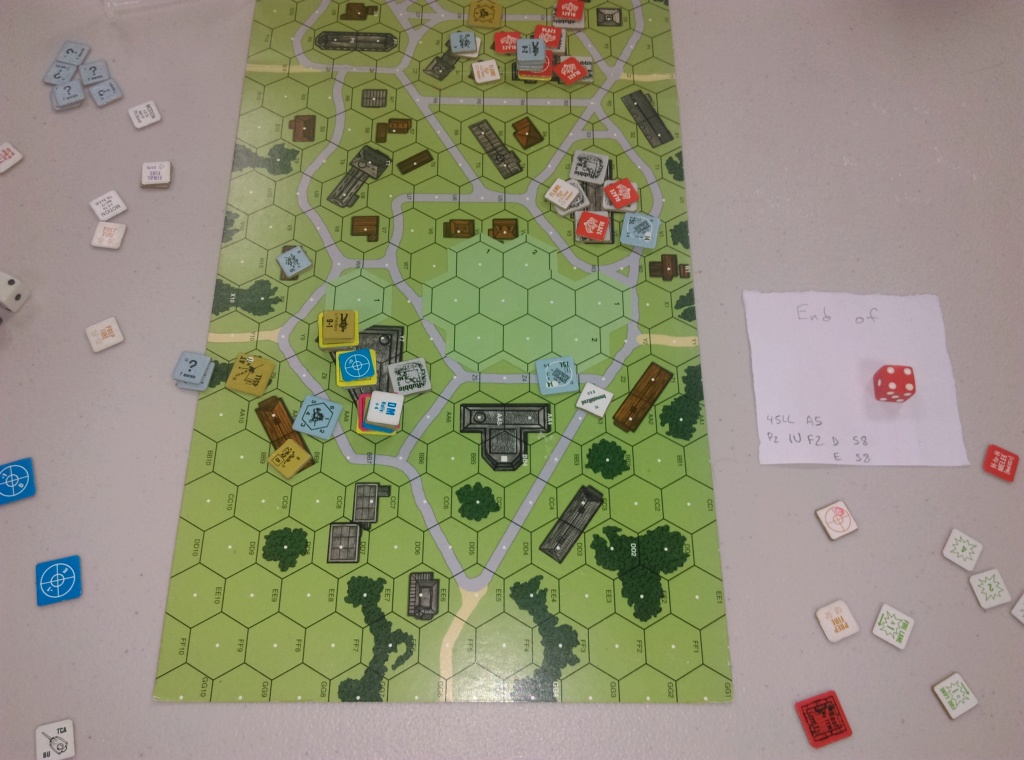 On turn 5, my Commissar rallies, and also rallies a broken squad with him ,but my bad MCs continue, including a 12 MC for my 628, and failures for my 9-1 and its 447 squad (note that all Russian units are Fanatic - although it certainly didn’t appear so !!!). By the end of turn 5, my 9-1 and its squad were forced to surrender to ADJACENT Germans, due to Upper Level Encirclement (A7.72), which was a new rule concept learned by Little Wolf that day. We also had some Gusts (B25.651), which led to a number of building collapses and flame spreads. The 9-2 MG nest has blazes all around it !!! 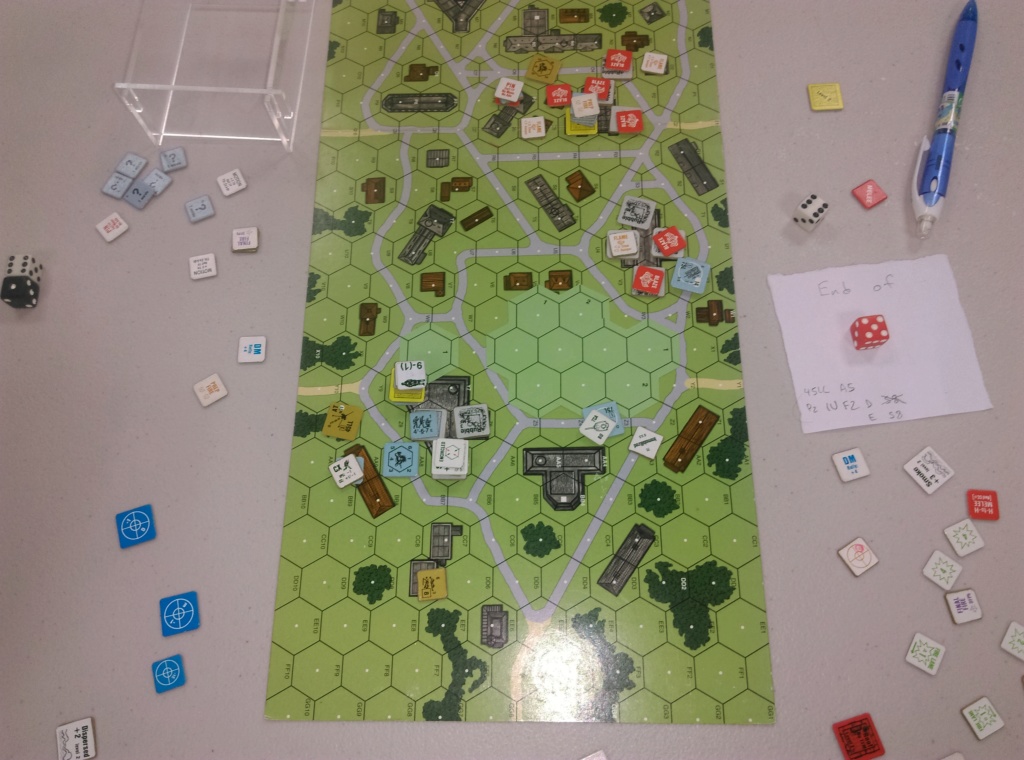 On turn 6, the Germans are able to eliminate the last units inside the VC building in their CCPh. In my turn 6, I rally the gun crew (my only remaining unit), who sets off on a futile suicide charge to re-enter the VC building, but is eliminated by the MGs of the still mobile PzIVF2, clinching a German win for Little Wolf. 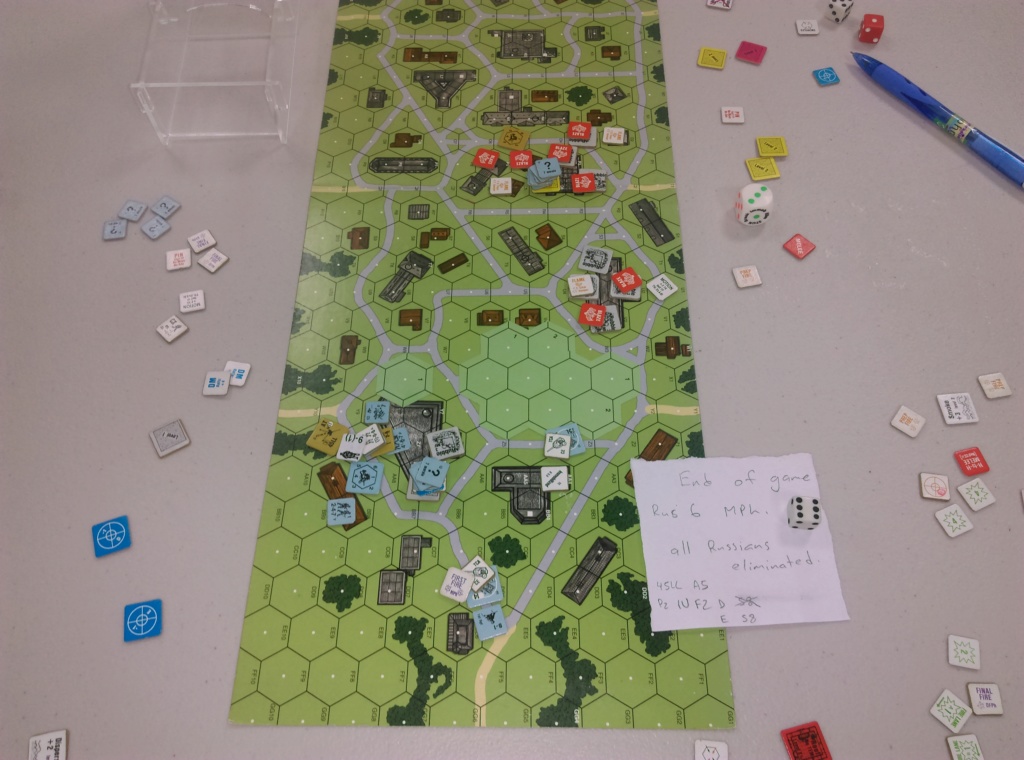 All in all, some really good combined arms progress by Little Wolf, who can now claim some ASL status as a completist, too. In the past 4 weeks, he has played ASL-N, ASL-127, ASL-125, and J-082, which were originally Cross of Iron tournament scenarios from The General Magazine Vol 19 No 5, which was published back in Jan-Feb of 1983.

(You can find the link here: http://www.vftt.co.uk/ah_mags.asp?ProdID=PDF_Gen )