Last month, Robin and I completed our VASL game of G-041 “Jabo!” In order to introduce Robin to Air Support (E7), I played the defending Germans, whilst Robin played the attacking Americans. This scenario is played on the KGP Cheneux map and depicts an American air attack on a German convoy. The Germans defend with 4.5 (658 SS) squads, 2 leaders, a Pz VG, 2 FlaKPz IV/20, a SPW 251/sMG, 3 SPW 251/1, and a KFZ 1. The Americans attack with 3 ‘44 FBs with bombs. To win at the end of 3 German player turns (there are no American turns), the Americans must amass 15 CVPs.

German vehicles must set up in motion in road hexes (from GG7 - JJ8), with all infantry as passengers/riders. However, they are able to use cloaking. Despite an absence of ground units, American FBs can treat units moving in OG as being non-concealed (although (as per E7.25), their identity is still masked). In order to better mask the identity of my vehicles, I deployed one squad, which gives eight units, enough to give each vehicle a passenger or rider. I set up my convoy as follows: 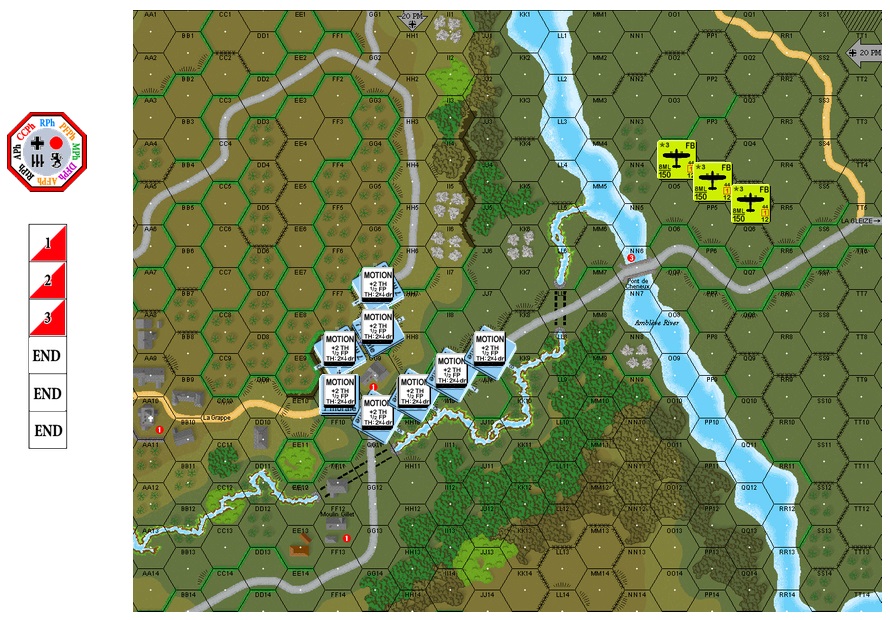 Looking at the last 4 road hexes (GG10 - JJ8), they form a straight line, which would allow a strafing attack to attack every vehicle ! Furthermore, rule E7.43 allows 1 FB to attack before any unit has expended a MF/MP (refer to the 5th sentence).

In turn 1, the first FB takes advantage of E7.43 and takes a Sighting TC (E7.3) from NN6 vs JJ8 (before attacking with a FB, a Sighting TC must be passed), which it passes, hits the rearmost vehicle (a SPW 251/1, FTK 6), and wrecks it. The crew perishes, but the passenger squad survives, is attacked by the 6 residual, and takes a HOB, which makes the squad fanatic and generating a 149. Robin then continues on with a strafing attack (vs II9, HH9, and GG10), and attacks II9, but the vehicle (and passenger) is unaffected. HH9 is attacked next, and the KFZ 1 and its 348 passenger are eliminated. The last hex, GG10 is attacked, which results in the SPW 251/1 half-track getting stunned. Robin attacks no more vehicles until final fire, so I am able to complete the rest of my MPh without being attacked.

In DFPh, the second FB rolls 12 on its Sighting TC, which results in the aircraft being recalled (an original 12 will do that) but still with enough negative mods in its favor to pass the Sighting TC, so it still continues its attack vs the SPW 251/sMG in CC3, which has unloaded its 348 passenger (with AAMG removed as a dismantled HMG) and by the end of the attack, the FB bomb attack burns the HMG half-track and breaks the unloaded half-squad. The second FB is then recalled.

The third and final FB attacks the stunned half-track in GG10. The vehicle is wrecked, but both crew and passenger squad survive (to subsequently get broken by the residual - the squad also suffered ELR). That brought the American CVP total to exactly 15, which results in an immediate American victory. 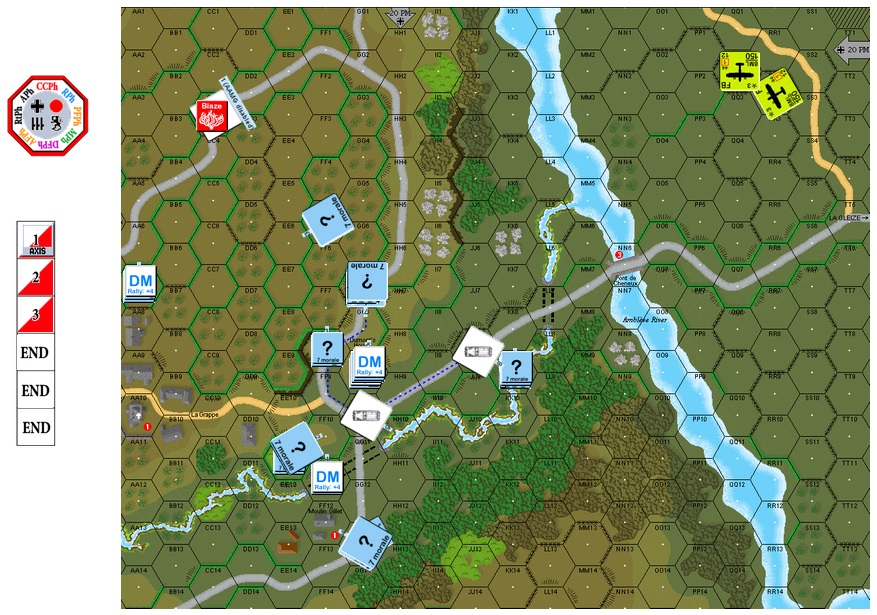 The result from this game was always of minimal importance to us, the goal was to familiarize Robin with the mechanics of Air Support. Given that E7.25 allows the American side a very decent chance of ending the game before the German ever gets a chance to do anything, its hard to regard this as a serious scenario, but it still plays a good role as a training scenario. I’m sure Robin enjoyed himself either way !!!