(More) Air Support Training On VASL, J-148 “Last Minute War (John vs Robin)
Last Friday evening, Robin and I finished our scenario of J-148 “Last Minute War”. This scenario depicts a Slovakian (Axis Minor) combined arms assault on a Hungarian held village using boards 44 and 56. This smallish scenario comes with quite a bit of spice, as it features (Slovak) AFVs, (Hungarian) OBA, and both sides receive Air Support (E7). The Slovaks attack with 22 (14x 347, 8x 336) squads, 4 leaders, 8 SWs, a LT vz 35 tank, and 4 OA vz 30 armored cars. The Hungarians defend with 9 (1x 447, 8x 347) squads, 3 leaders, 5 SWs, 7 dummies, a crewed 37L AT gun, a crewed 20L AA gun, and one module of 70mm OBA (with a lvl 3 offboard observer and an automatic initial black chit). Both sides receive a ‘39 FB (without bombs), and vehicles that move off-road risk bog as if mud were in effect. The game lasts 5.5 turns, and the Slovaks win immediately if there are no unbroken Hungarian MMCs on board 56 from rows I to Y, or at the game end by controlling 11+ buildings within 3 hexes of 56P5.

As a continuation with our goal of familiarizing Robin with Air Support, Robin played the attacking Slovaks (Axix Minor), whilst I played the defending Hungarians. No balance was in effect. With both sides getting Air Support, the opportunity for a Dogfight (E7.221) is highly likely, which is why I chose this one for us to play. The Slovaks have to attack fast, and both sides are quite fragile. However, with the Slovaks having a good parity of squads (22 vs 11; I consider a crewed gun to be worth 1 ‘squad’), they can afford to use calculated aggression. Board 44 features a lot of open ground, bit with less than a dozen squads defending the board width, I cannot effectively defend everywhere. I put the AA gun in L1 to defend the village, the AT gun in Q5 to dominate the village, fire groups in P9, R9, T6 (and dummies in W5), and a mixture of real and dummy units defending the north flank. Foxholes went in P5, Q6, R5, S6 to allow my units safe withdrawal across the streets. The basic idea was to try and keep the Slovaks out of the village for as long as possible, since my weak squad FP will struggle to get results once the Slovaks have building cover. The offboard observer set up in M1, from which it can see the majority of key areas around the battlefield. 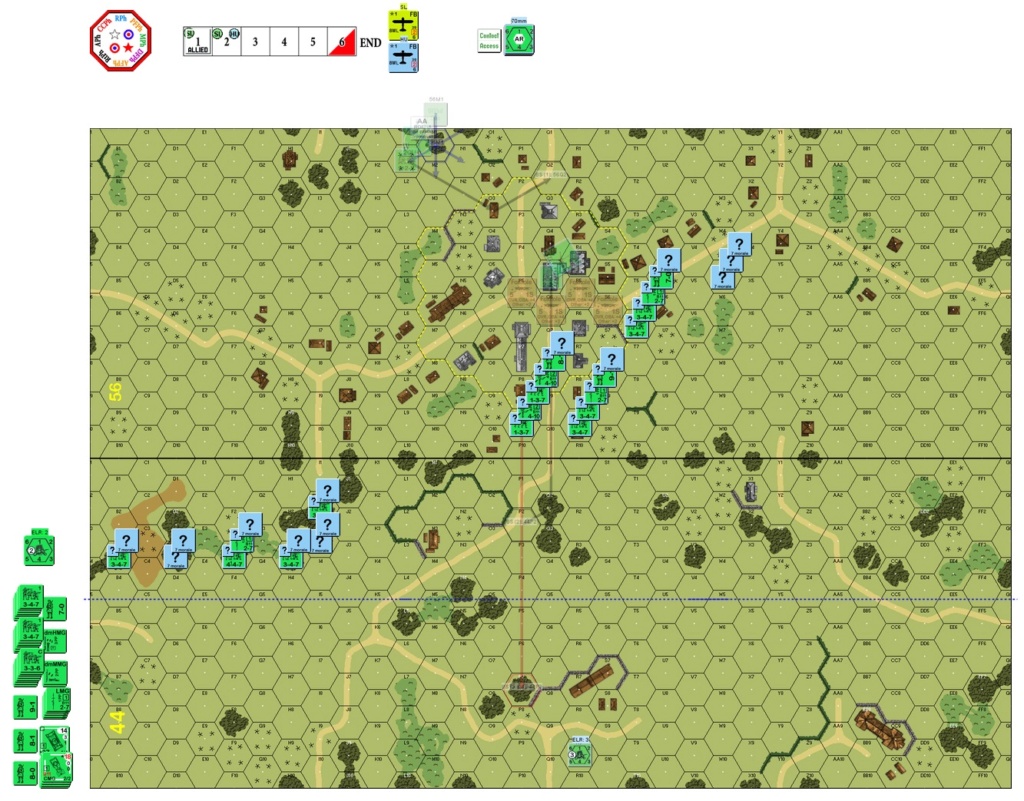 In turn 1, Robin attacked with 2 stacks advancing under the cover of Armored Assault (D9.31), and the rest using skirmish moves. A pair of OA vz 30 armored cars also braved the offroad mud conditions and advanced along the right flank. For the most part, the moves were safe, and Robing got his guys on map without much trouble. In turn 2, it was pretty much more of the same, but my MMG team in 56P9 gets a string of ROF DRs in both D1F and PFPh and a total of 6 squad-equivalents (mostly 336) have been eliminated by the end of turn 2. And just to rub salt into the wound, my FB arrives turn 2. 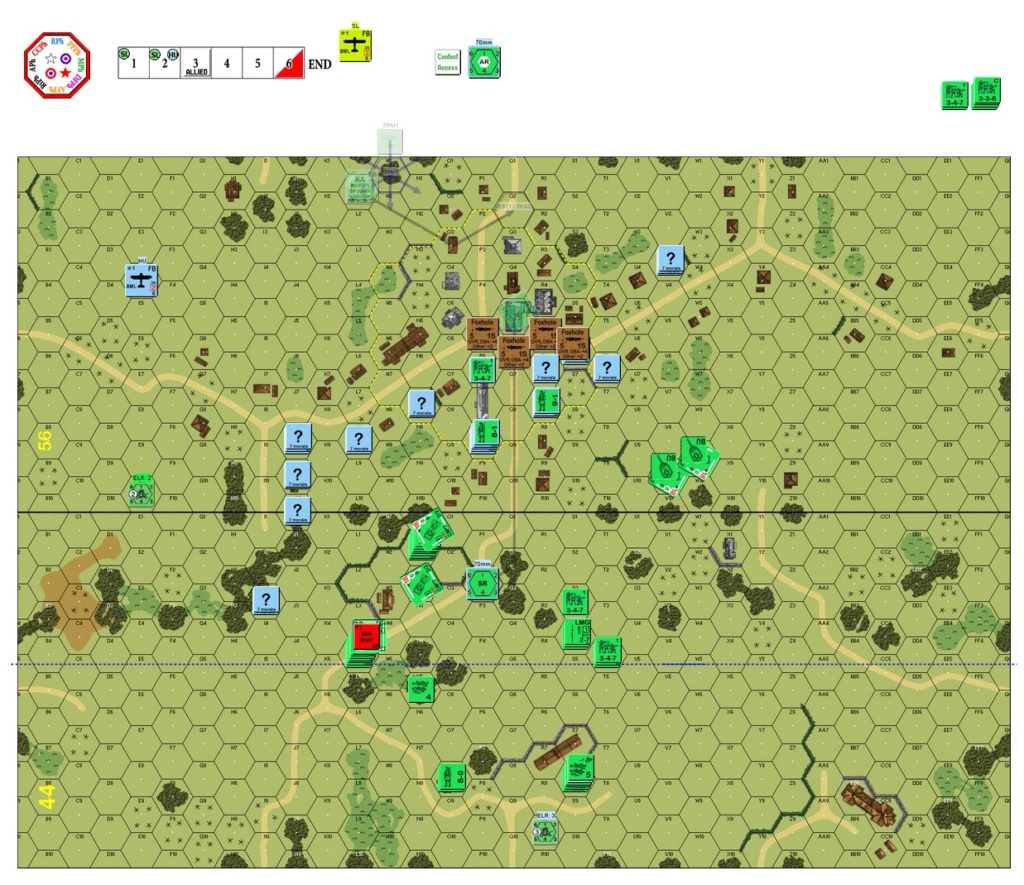 In turn 3, the Slovak FB arrives, but before it can be locked up in Aerial Combat (E7.22), it conducts a strafing attack vs 2 armored cars, wrecking both of them. In the same turn, the 37L ATG wrecks the LT vz 35 tank with its first shot, a 3rd armoured car is wrecked (by a LMG), the only remaining armored car Bogs (D8.2), and the OBA catches some MG armed squads in woods, breaking several of them. My Hungarians can do little wrong. In the CCPh, Robin attacks my FB with his, but both sides miss, resulting in an Aerial Melee. In my turn 3, I take a chance with the OBA versus a second group of MG armed squads, and the FFE2 lands perfectly for me, once again breaking many Slovaks. A MG attack on the bogged AC fails to affect the vehicle, but with a FTK of 5, it forces an Immobilization TC (D5.5), which the crew fails. Robin currently has no (manned) AFVs, and only 5 unbroken squads, and a number of my units are now pursuing the broken Slovaks. In the CCPh, one of my squads ambushes and eliminates the abandoned crew, and my FB shoots down the Slovak FB. I’ve pretty much enjoyed 3 consecutive fire phases where my units could do little wrong, and Robin has less than half a dozen GO squads against my Hungarians who haven’t suffered a scratch (and are likely to acquire a captured armored car). We put a fork in this one at this point. 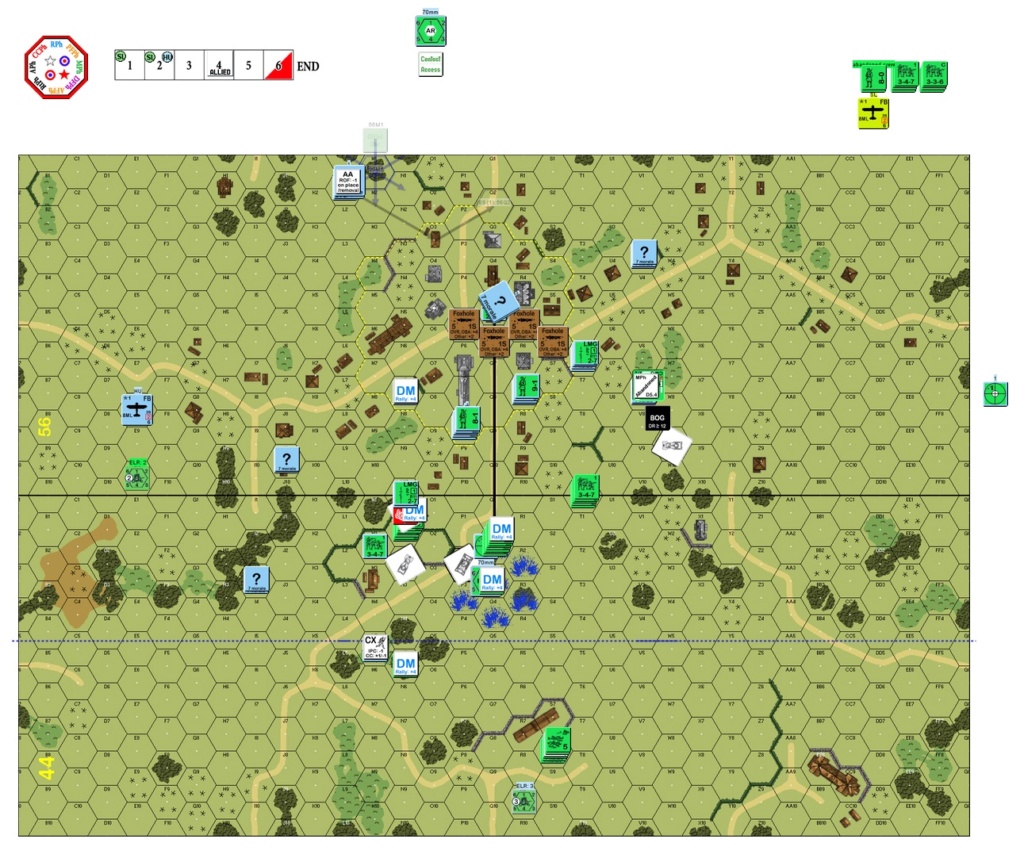 A total dicing of Robin, which he took in pretty good humor. But the one positive is that we got to conduct a bit Aerial Combat (E7.22), which was what we had hoped for from the get-go.