ASL Meeting In Gongguan (N.T.U.) ASL-002 “Mila 18” (John vs Robin)
Last Saturday, we had our monthly meeting at N.T.U. A very small turnout with just 3 of us (KangYu, Robin, and myself) there. Robin and I were the only ones there in the morning, and one scenario that’s been on our dance card is ASL-002 “Mila 18”. This scenario depicts a German (SS) rounding up of civilians opposed by ZOB (Partisans), and so there are some ASL players that find it distasteful. Without digressing into an ethical discussion on civilian atrocities, I will simply and honestly say that I fully respect and understand that some people will choose to avoid the scenario on ethical grounds and I will not criticize them in any way for it, and I can only hope that they would show equal respect for those whom choose to play it. In this playing, I played the defending ZOB, whilst Robin played the attacking SS. SS balance (which lowers the Mop Up total to 22 and the CVP ratio to 1.5) was in effect.

I have rather skeptical views about the way both sides are historically represented in this scenario. This was the first military action for ZOB, yet they are portrayed as Partisan Supermen, which is a bit tough to swallow. There was nothing remotely Lax about the SS whom they fought, either. They were hardened veterans of the eastern front, who soon made light work of overcoming the ZOB. But historical accuracy aside, this scenario plays very well as a finely tuned game. The ZOB have to do just enough to prevent the Mop Up VCs, but as they drop HIP status and come into play, the raw firepower of the SS usually allows them to get the better of the Partisans who are essentially out-gunned at nearly a 2:1 ratio. I set up 4 squads around M3, 2 squads defending each of the Q5 and T9 bridge areas, and had the 3 remaining squads defending around M8, with U8 as the fortified location. 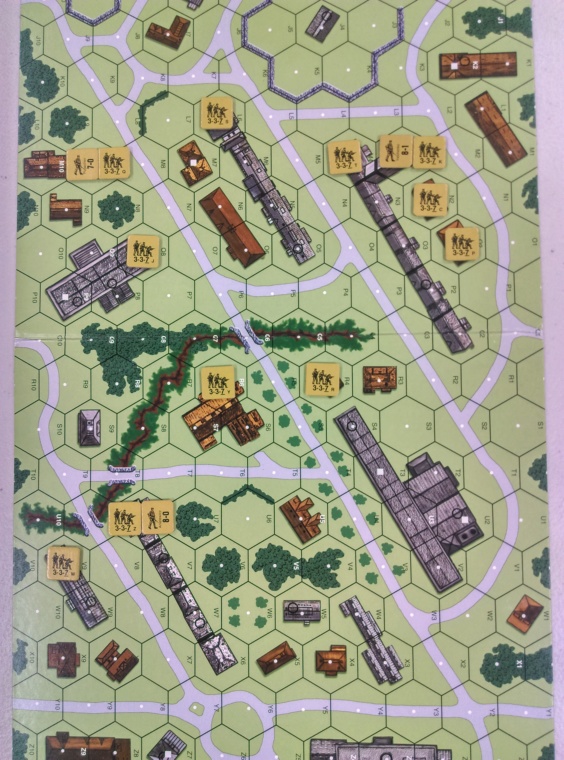 On turn 1, Robin deploys 3 more squads, for a total of 6 squads, 8 half-squads. All units enter the board unharmed. 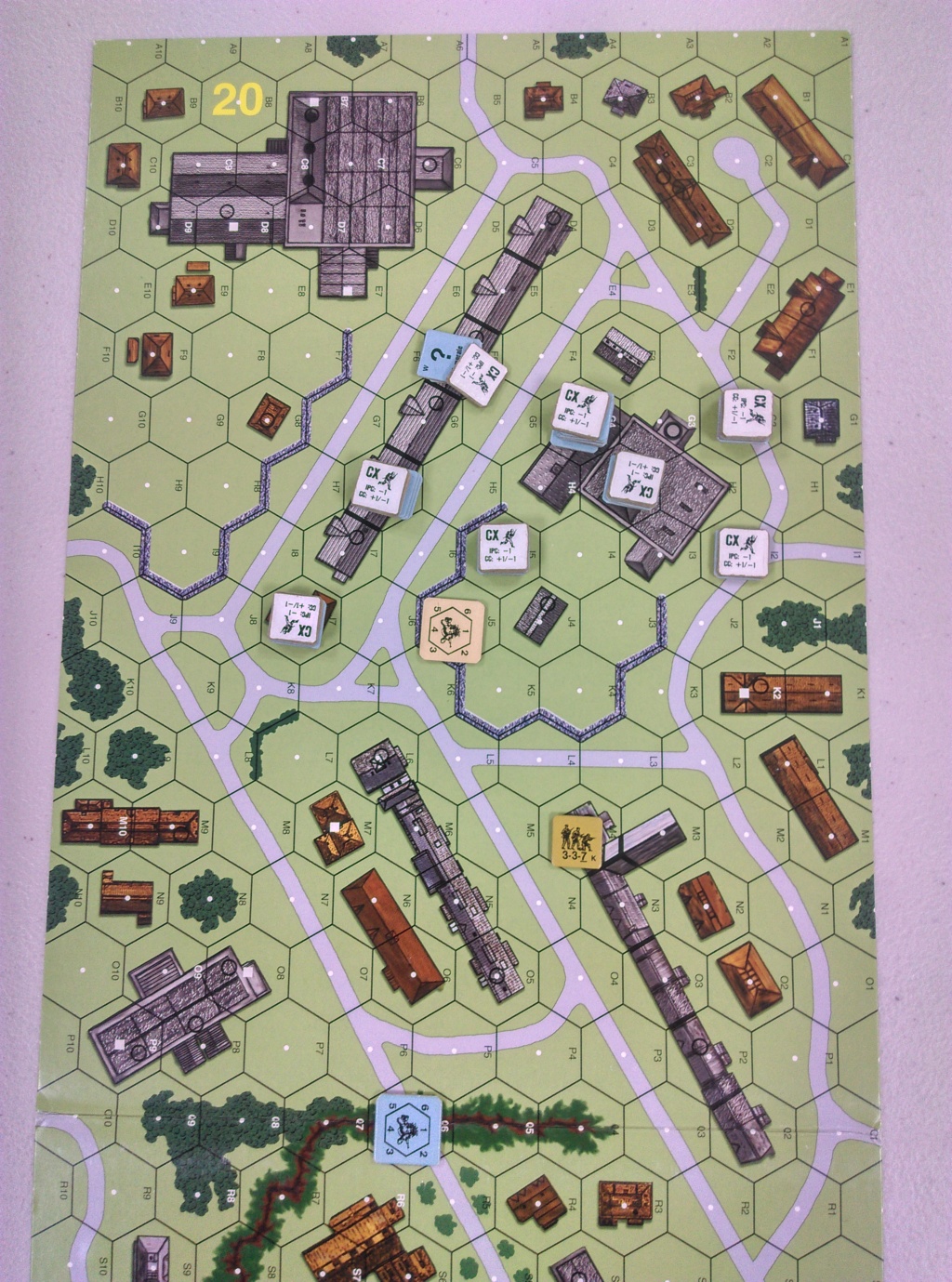 Things got a bit hotter during turns 2 and 3. Robin tried to back his morale, and ran the gauntlet, but my FP was punishing, and several SS half-squads were gunned down in the street. Some CCs went my way too, and by the end of turn 3, I had created an 8-1 leader, and was leading in CVPs 6-4. Meanwhile, 1 building had been Mopped up. 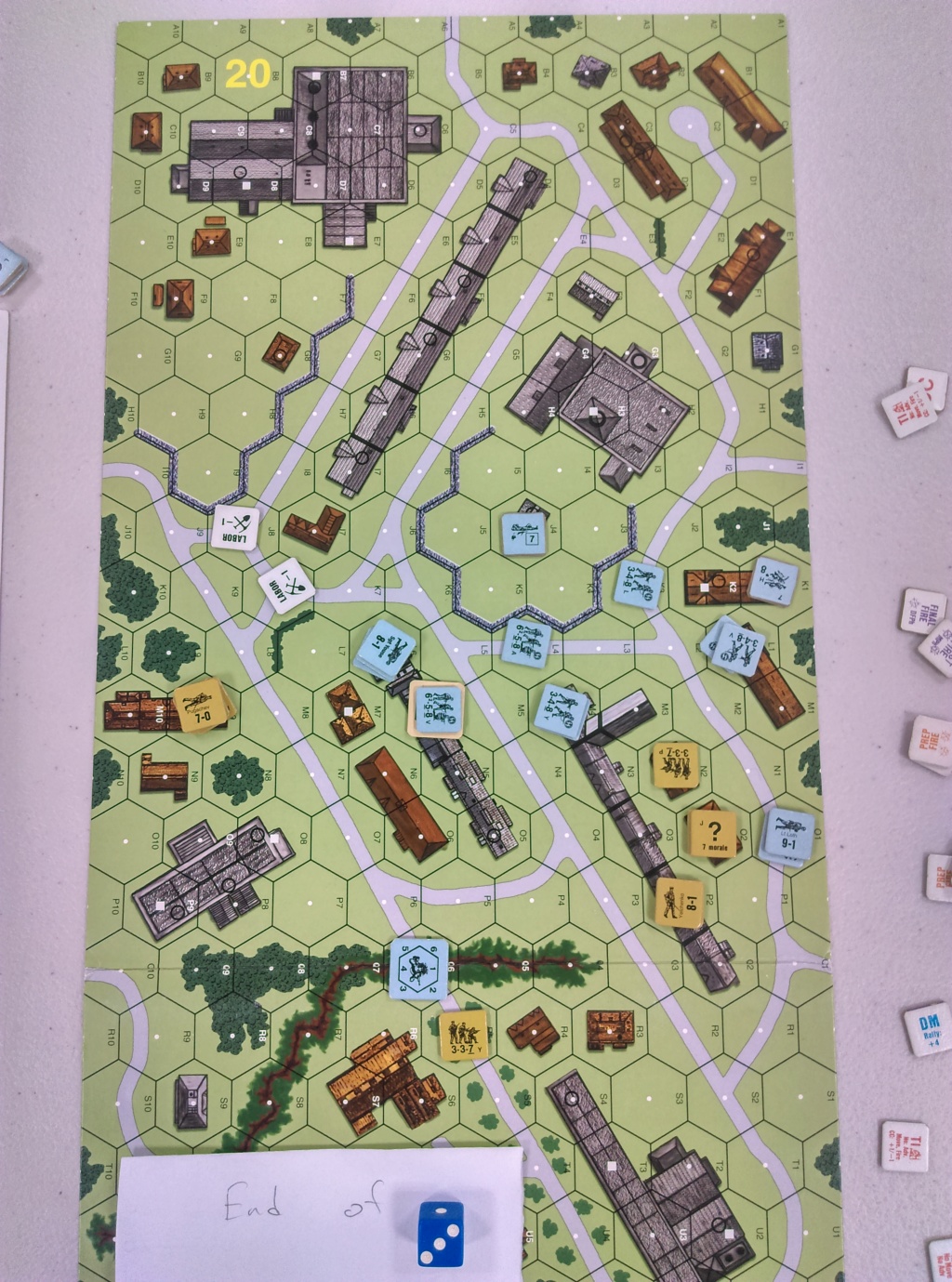 But now that the SS had toeholds in buildings, they were able to go to work on my squads. Despite having the Ambush (A11.4) advantages, no major ambushes were sprung, and by the end of turn 4, Robin had equaled the CVP total 6-6. Two buildings mopped up. 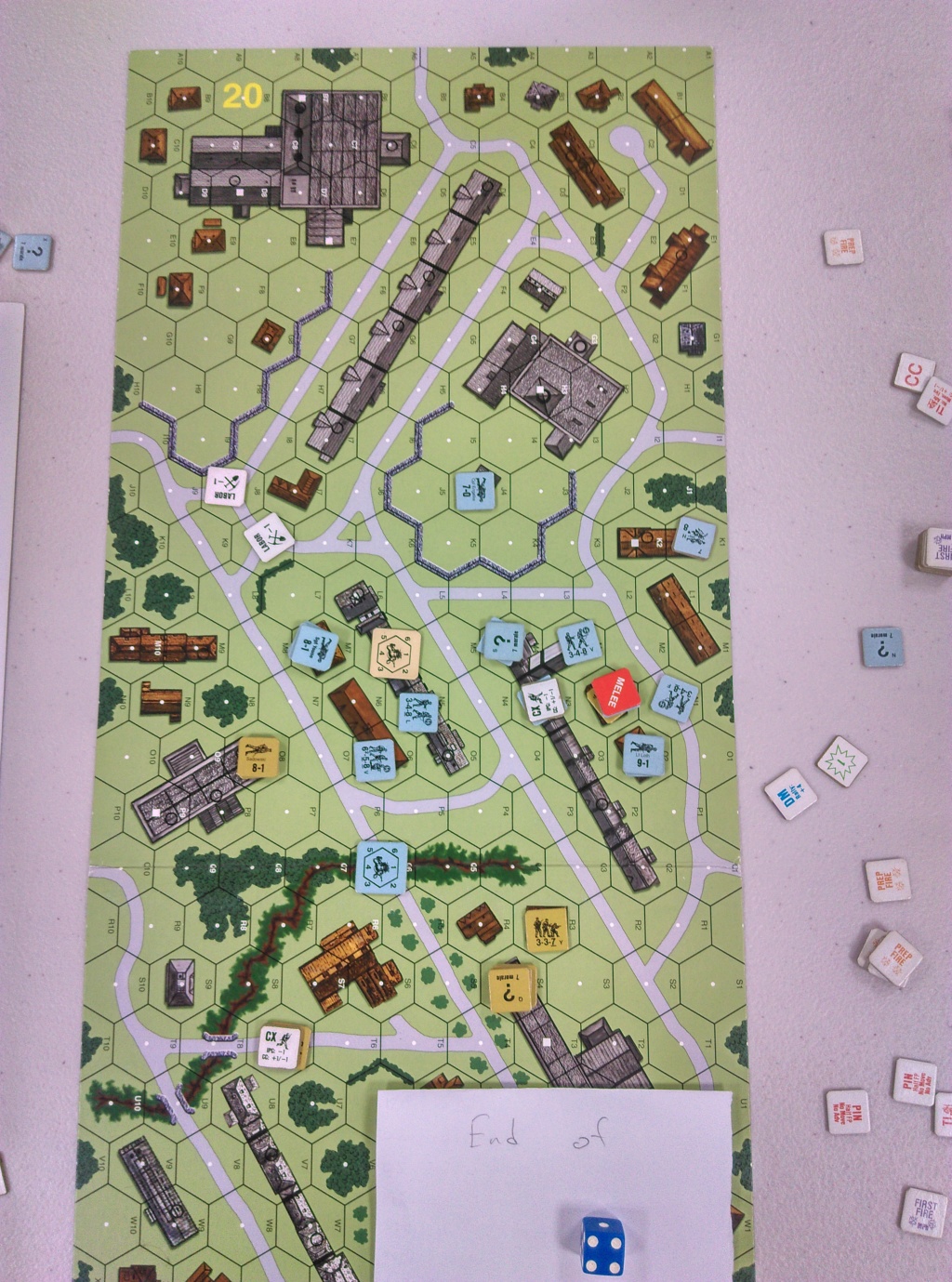 Turns 5 and 6 saw Robin apply the heat by actively pursuing both VCs with ease. By the end of turn 6, he had 10 buildings mopped up (12 to go) and was ahead 12-7 on CVPs. With balance in effect (lowering the CVP ration to 3:2), this meant that the SS were currently ahead. 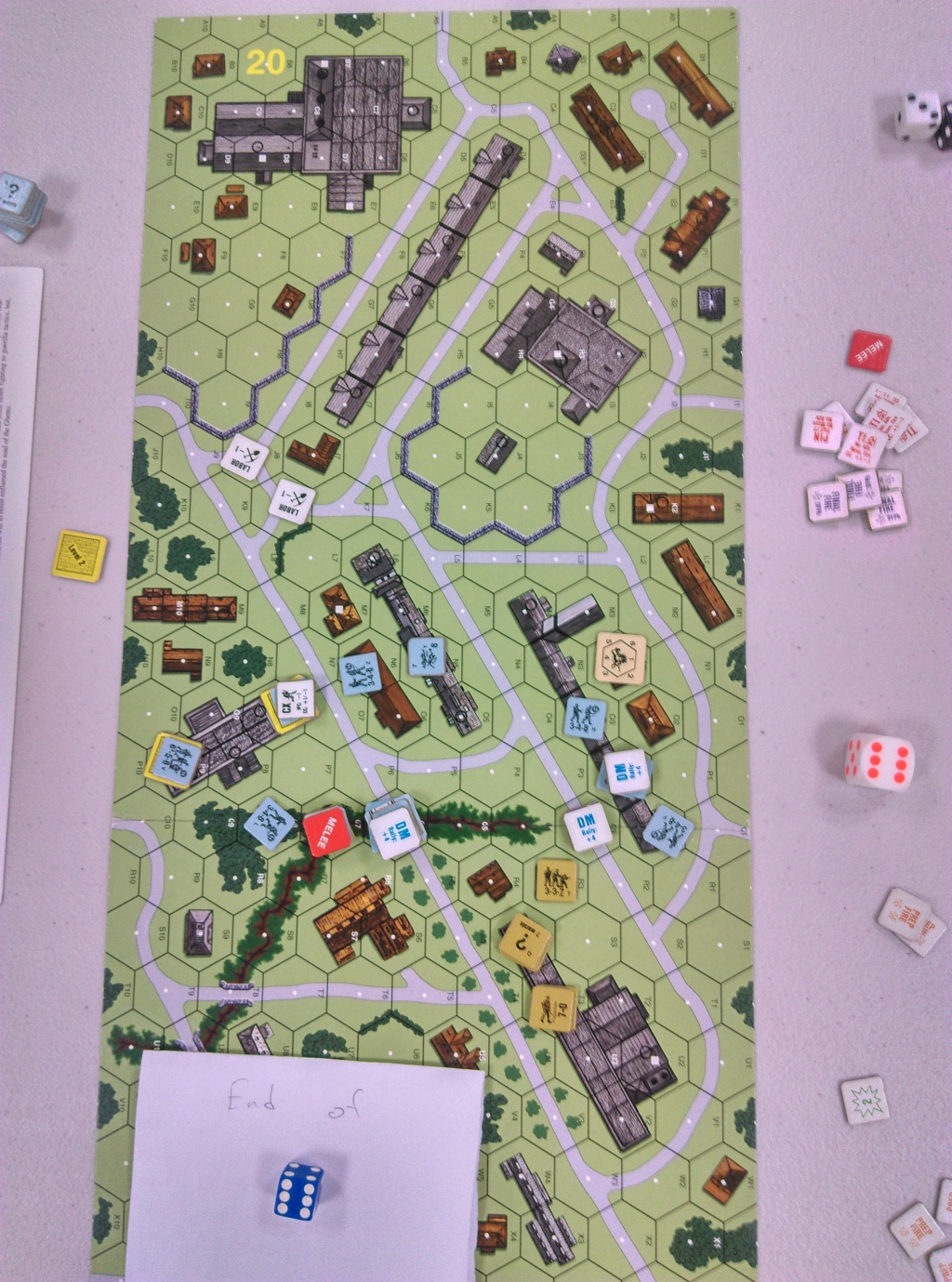 In turn 7, Robin captured one of my squads (in CC) and during turn 8, I was forced to try and free them (as the 4 points gained by their capture would give the SS a large lead). But by the end of turn 8, my force was in total ruin, being myself a victim to some hot SS fire and FTR traps. By the end of turn 8, Robin has pretty much given away trying to win by mopping up, but with the CVP count at 20-10 SS, he has pretty much clinched the game. 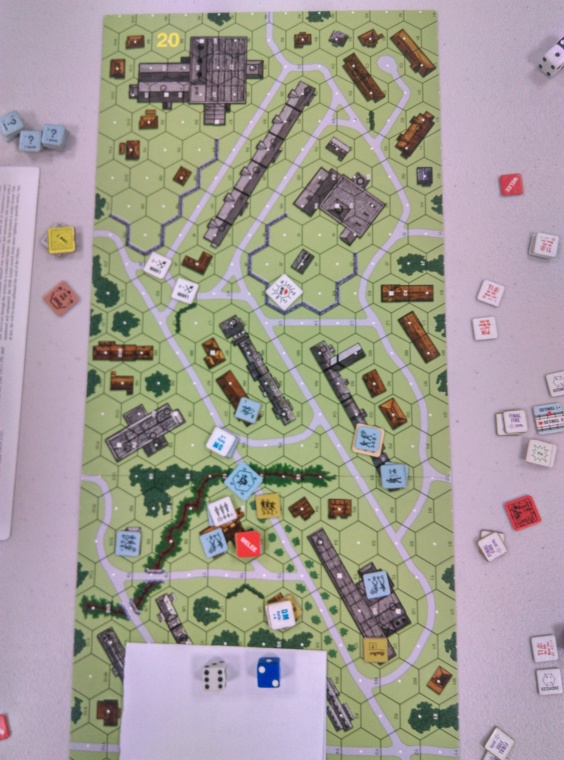 In Robin’s turn 9, he shows no mercy, and manages to surround and eliminate every last one of my units for a final score of 30-10 in CVPs, exactly double that of what he needed. Despite the drubbing, I enjoyed the game. I had some good shots early in the game, and Robin certainly enjoyed some good shooting too. It was nice to see the ebb and flow of this very interesting scenario.