ASL Meeting in Gongguan (N.T.U.) O-016 “Forced Crossing”
Last Sunday, we had our monthly meeting at N.T.U. We were expecting 5 persons (KangYu, Little Wolf, Roy, Robin, and myself), but Robin was unwell, leaving 4 of us. I was setting up to play ASL-170 “11th Company Counterattack” with KangYu, and Roy was setting up O-016 “Forced Crossing” to play vs Robin. When Little Wolf showed up, I got him to take my place and play vs KangYu, whilst I played against Roy in place of Robin. So, I got to play O-016 as the defending Germans, whilst Roy played the attacking Russians. No balance was in effect. 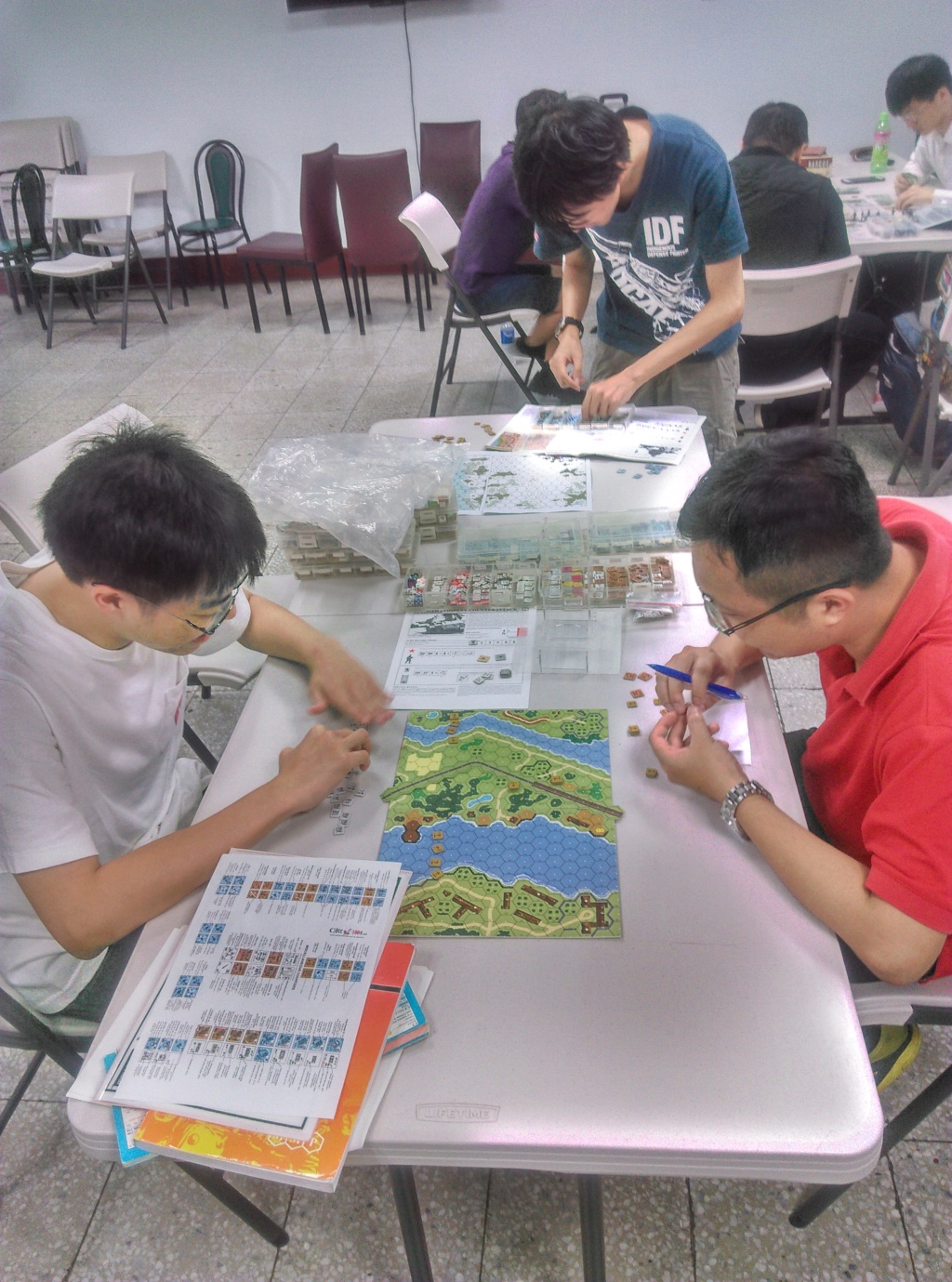 This scenario uses 2 half boards (07, 38) and depicts a Russian assault on a a German bridge position with ground snow and heavy (SSR 1) falling snow occurring. The Russians win at the end of 6 full game turns if there are no Good Order German units west of the river within 5 hexes of 7AA9. The Germans defend with 7 (468) squads, 2 (248) half-squads, 3 leaders, 3 SW, and a (LMG armed) KFZ 1. The Germans also receive 10 dummy counters, and 4 foxholes. The Russians attack with 10 (458) squads, 3 leaders, and 8 SWs. The Russians also begin with an ‘infiltrator’ group consisting of 5 (248) half-squads, 1 leader, 1 hero, 1 SW, and 6 dummies (which can set up anywhere (west of the river) that isn’t adjacent to German units. On turn 1, the Russians get reinforcements in the form of 2 (458) squads, a leader, and a crewed 76 Art gun.

The Germans really don’t have a lot of firepower, and the heavy falling snow makes closing the range a lot easier. Worse yet, being surrounded by Russians means that any units that break are going to have a lot of trouble routing and rallying. With this in mind, I deployed another half-squad so as to spread out and give me at least 1 corner that would be clear of Russians. 4 half-squads and one squad would look to deal with the infiltrators, whilst the remaining 6 squads would defend the bridge and frozen river. Roy set up to try and force his way across the bridge, but with a leader directed LMG to place a Fire Lane, I was at least confident that I could slow him down. 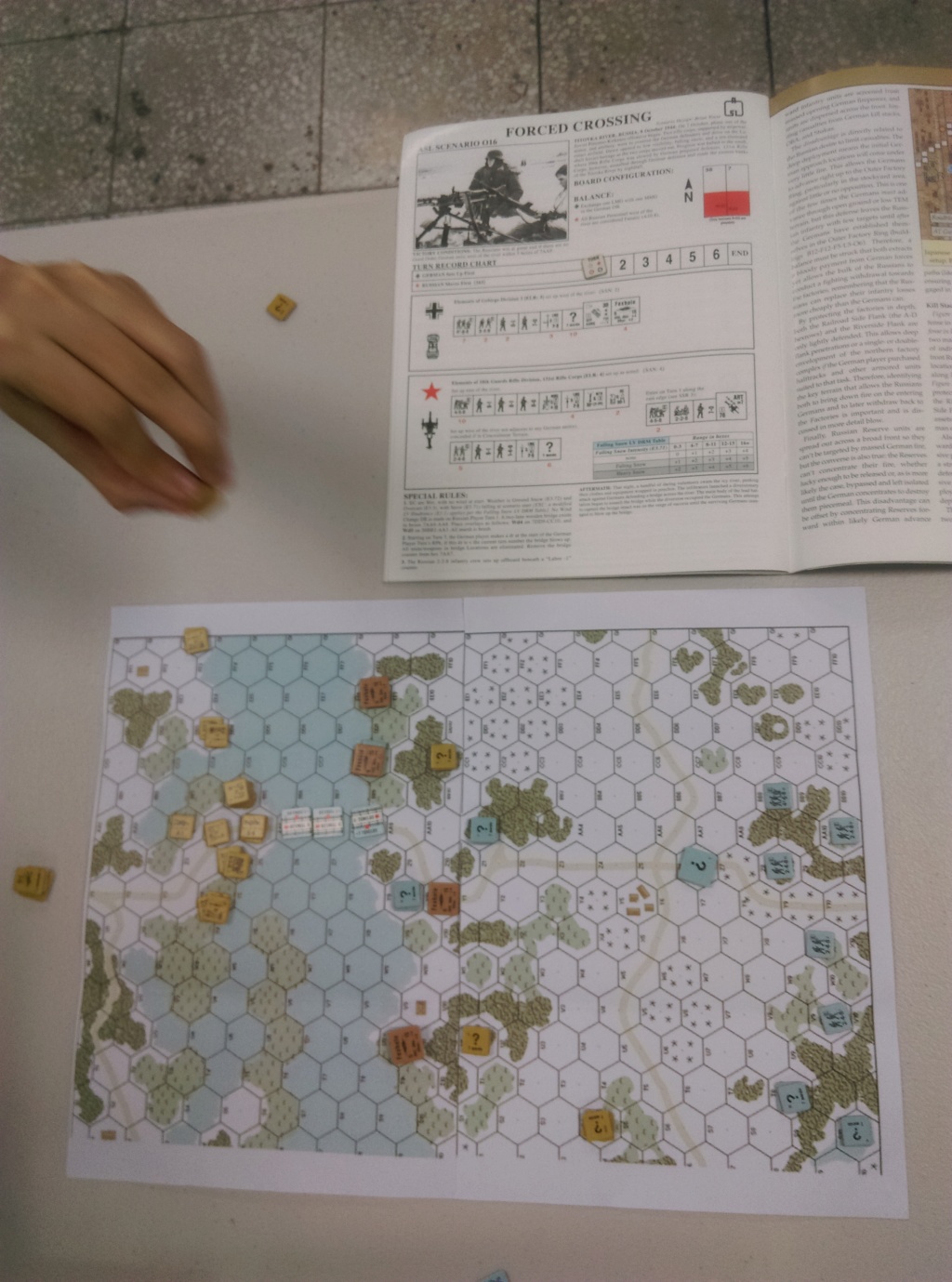 In turn one, on the first shot, a Russian 50*mtr gets a Critical Hit vs a concealed leader, LMG/468 team. R/S affected both units , and both were subsequently broken and cut off, never to make any impact in the game. Worse yet, when Roy attempted to be bold and run across the bridge, my other ‘-1’ directed MG team malfunctioned the LMG when trying to place a Fire Lane !!!! But bad as that sounds, my remaining units held up well enough to not be in too bad of a position. 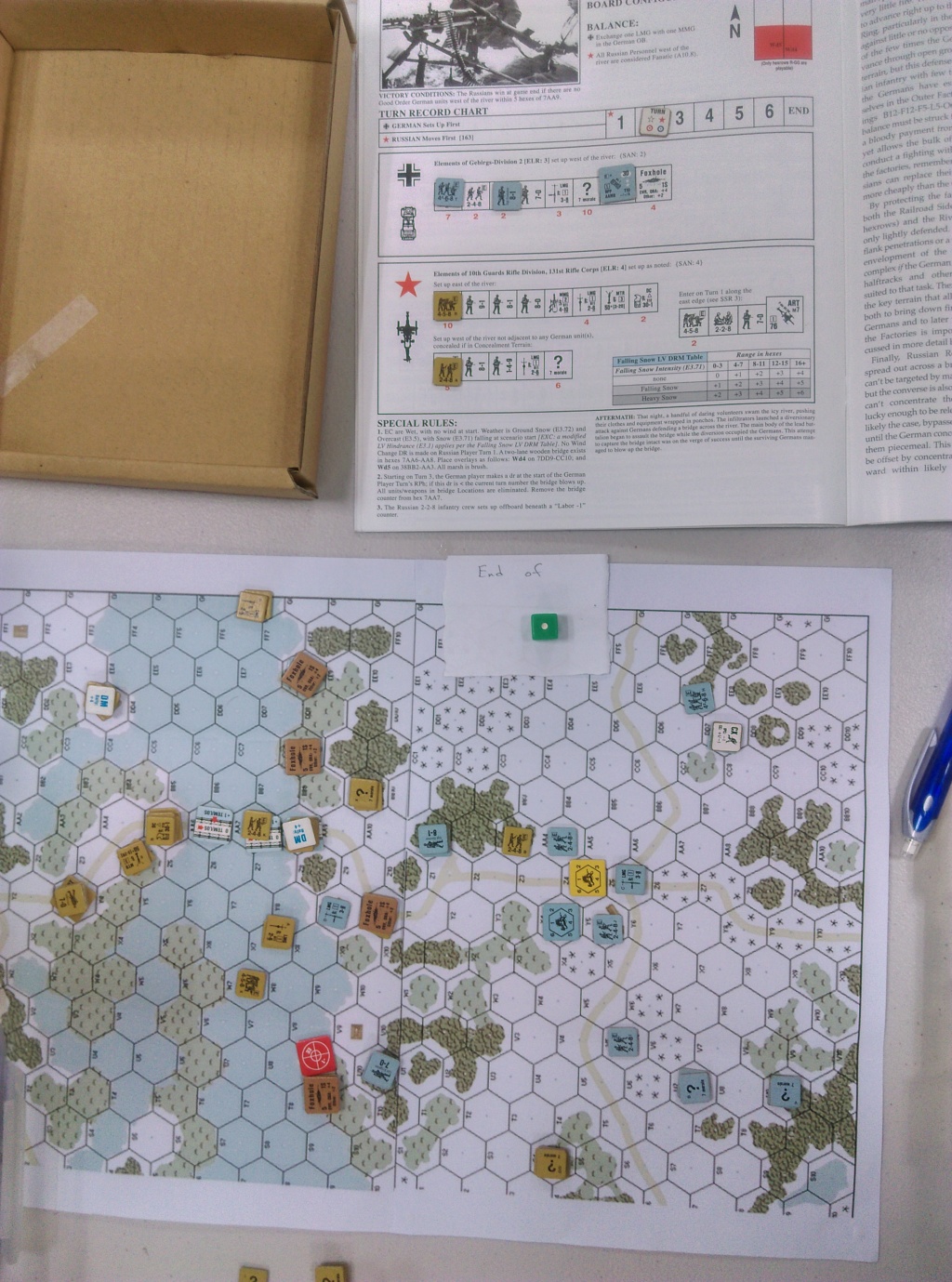 In turn 2, Roy got a number of Russians onto the west bank, as I attempted to eradicate his infiltrators. Both sides would throw a number of extreme DRs in this game, and we saw a number of SWs malfunctioning, and a lot of casualties to 12 MC and Rally DRs. 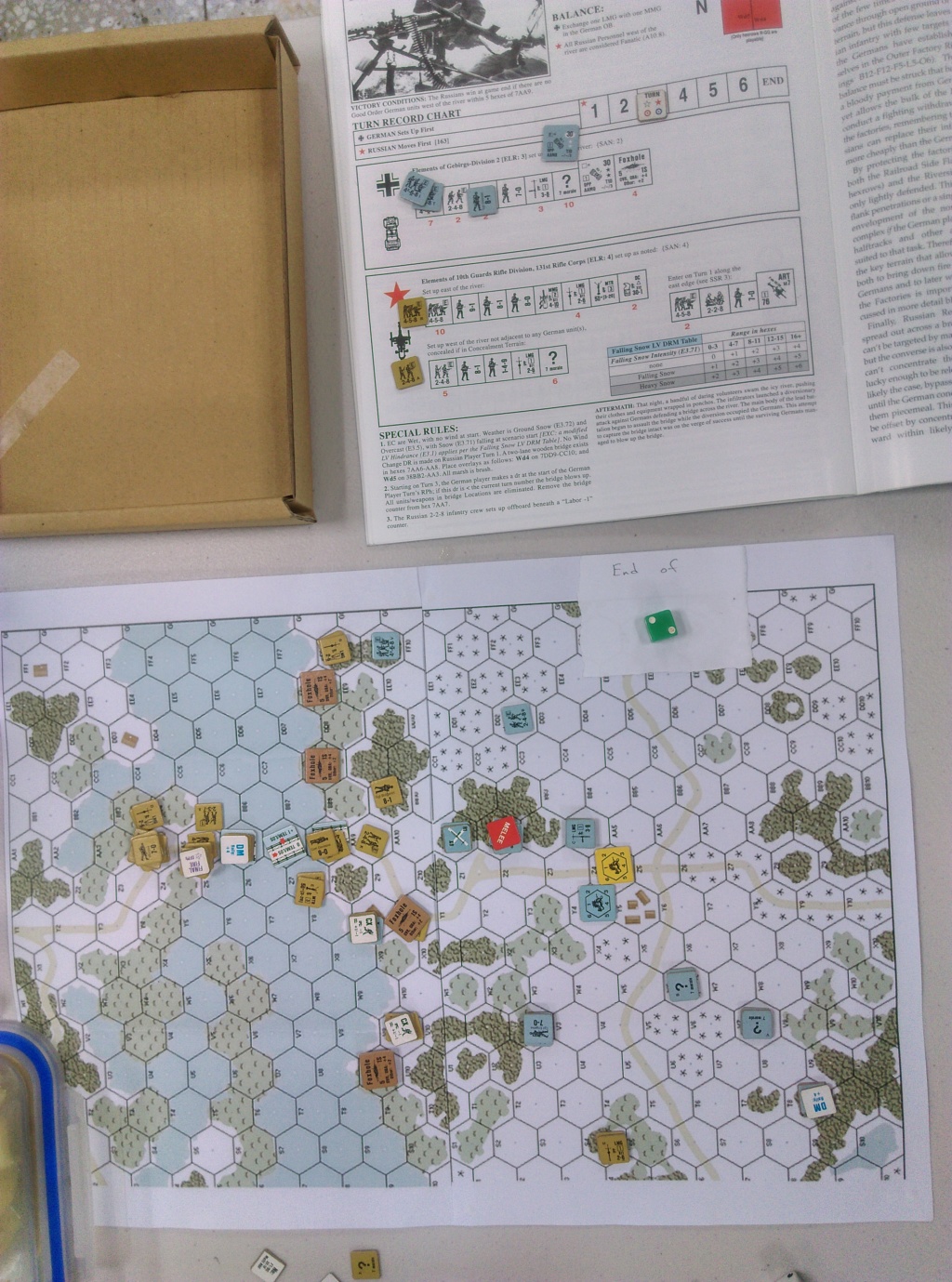 In turn 3, after manhandling the 76 Art into firing position, it promptly rolls 12 on its first TH DR (and would later disable whilst attempting repair). Meanwhile, in the German portion of turn 3, the bridge would blow up (as per SSR2). My Germans began to form a salient in the woods around 7AA2. 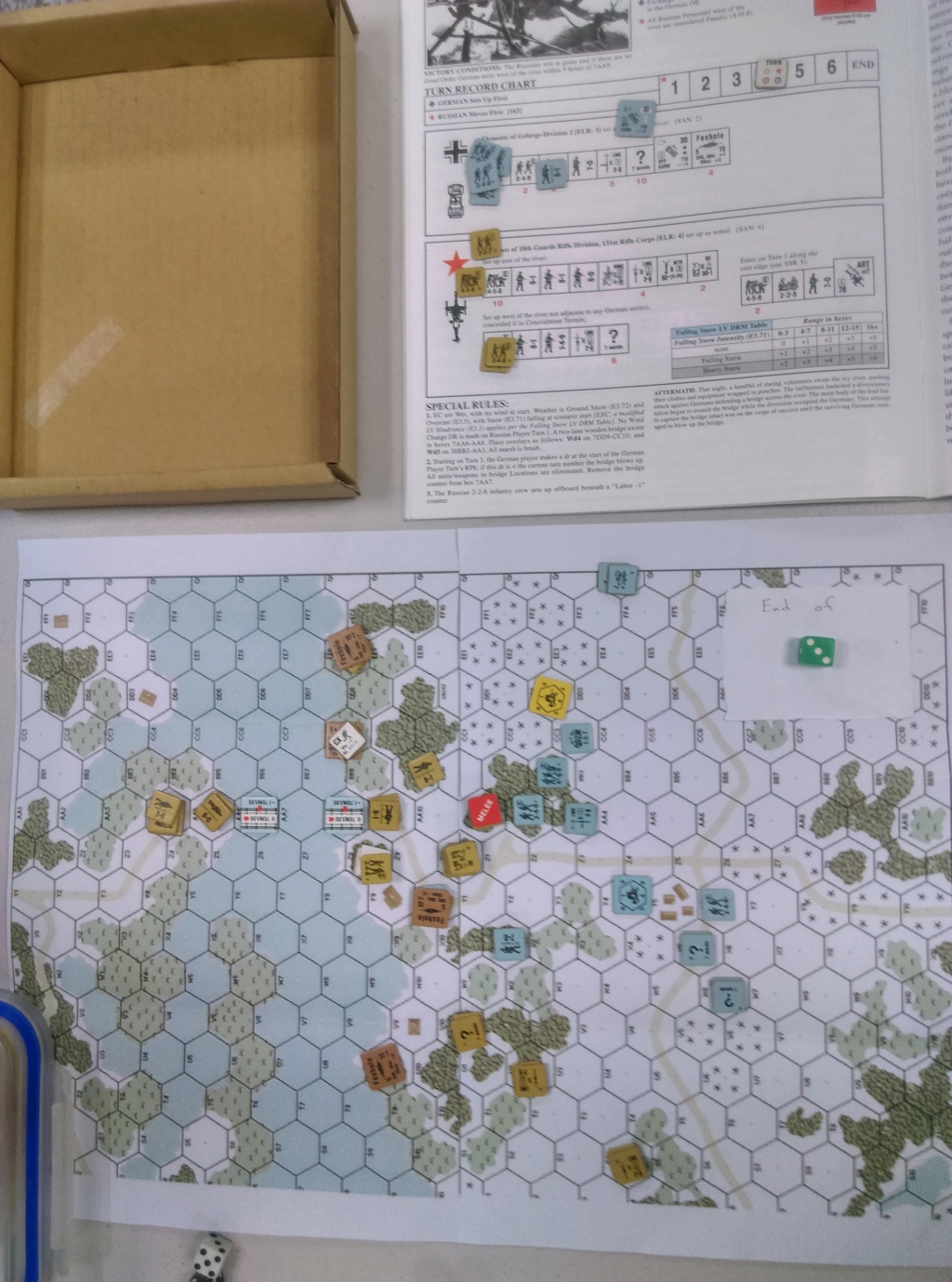 In turn 4, the Russians continued to push closer, whilst the Germans simply attempted to hold out. Routing and rallying was always problematic for both sides, but my Germans just did enough to keep themselves in the game. 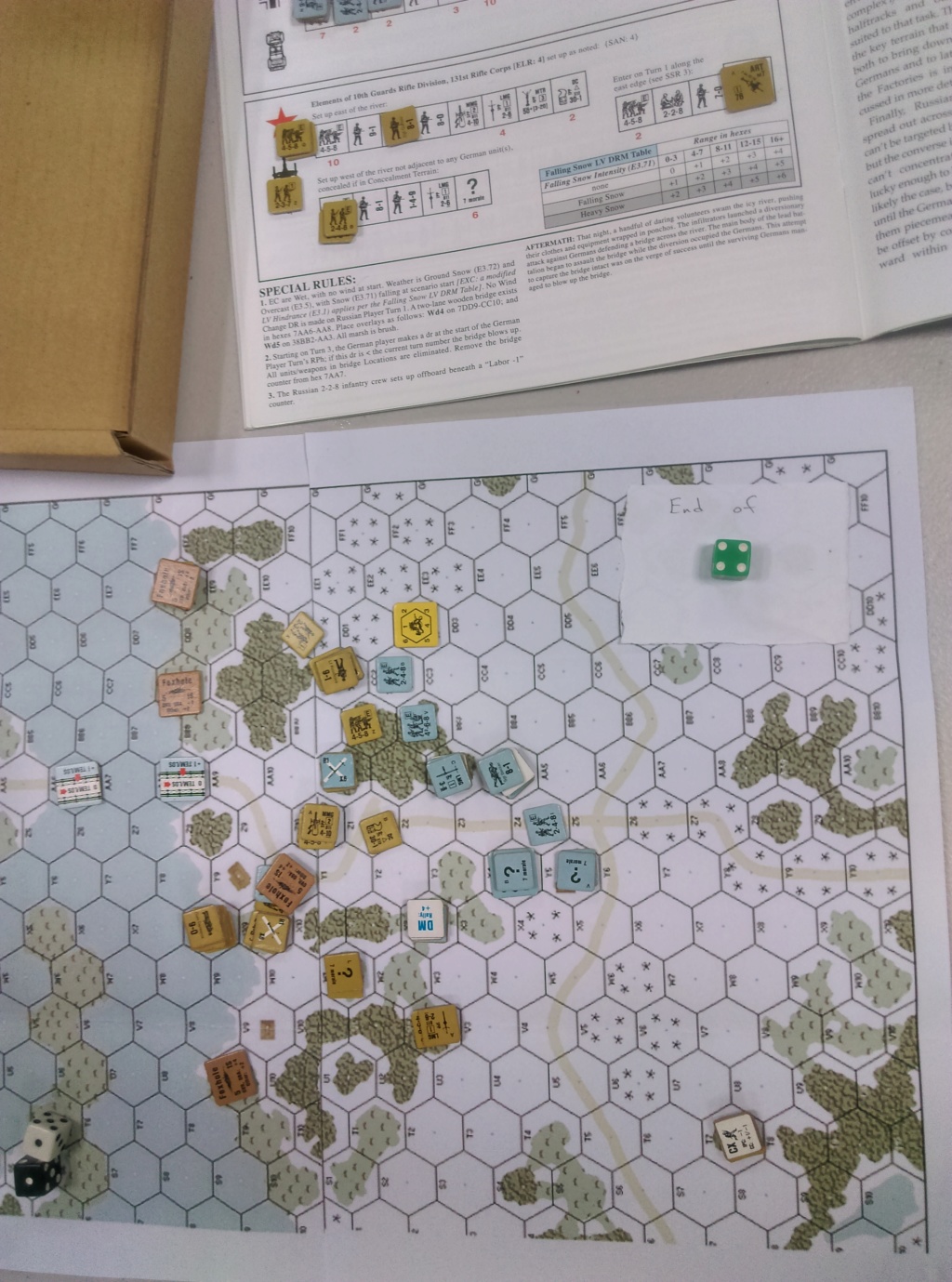 In turn 5, the Russians continued to push, but my fire attacks were just good enough to stay out of CC, and my sole surviving 8-1 did sterling work in regards to rallying. I had abandoned the KFZ1 (and re-distributed its LMG to a 468 squad), and its 127 crew would lead a charmed life, passing a number of MCs and generally making a huge nuisance of itself. 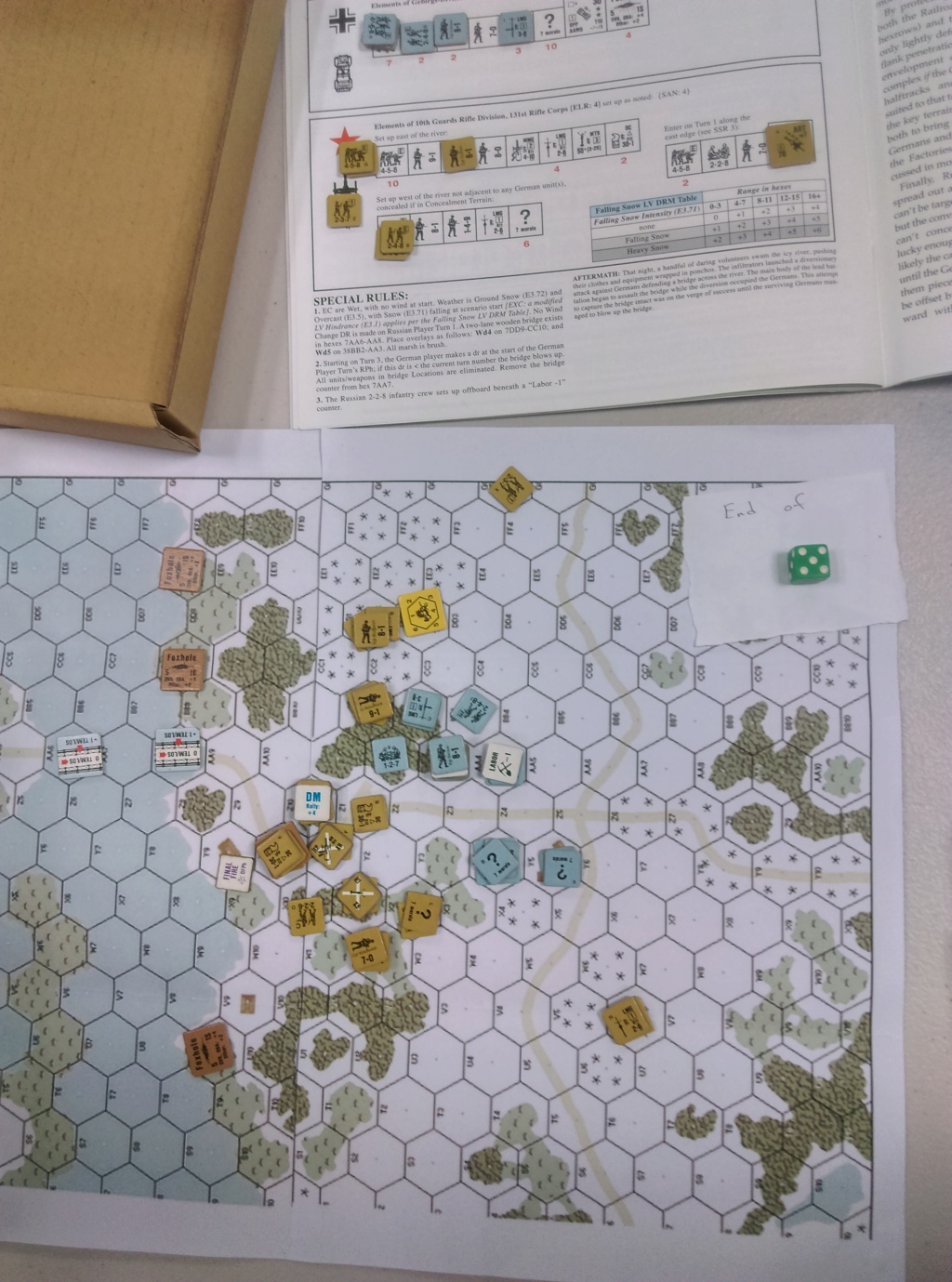 In the final turn of the game, the Russians went all out to close the range for CC, and my FP was not up to the task in stopping them. Neither side got much help from the IFT, so the Russians were able to CC every German unit in the VC area. But with 5 CCs, you have to expect that one or more might not go the way of the Russians. And so it was that all CCs were inconclusive up to the last one, where the ever-infuriating 127 Kubelwagen crew achieved ambush, and was able to withdraw away, and pass a NMC in the final turn of the game to clinch a German victory. 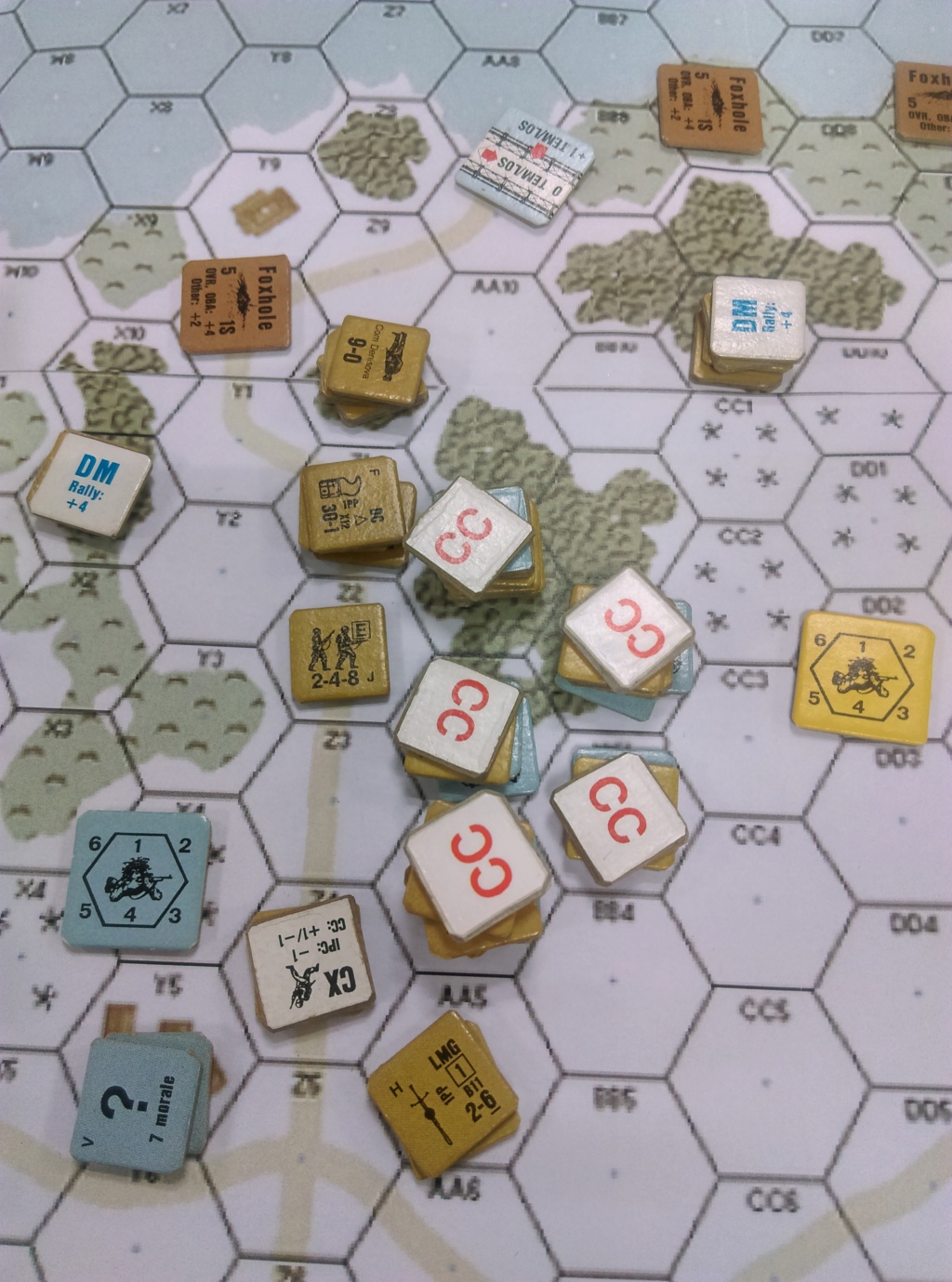 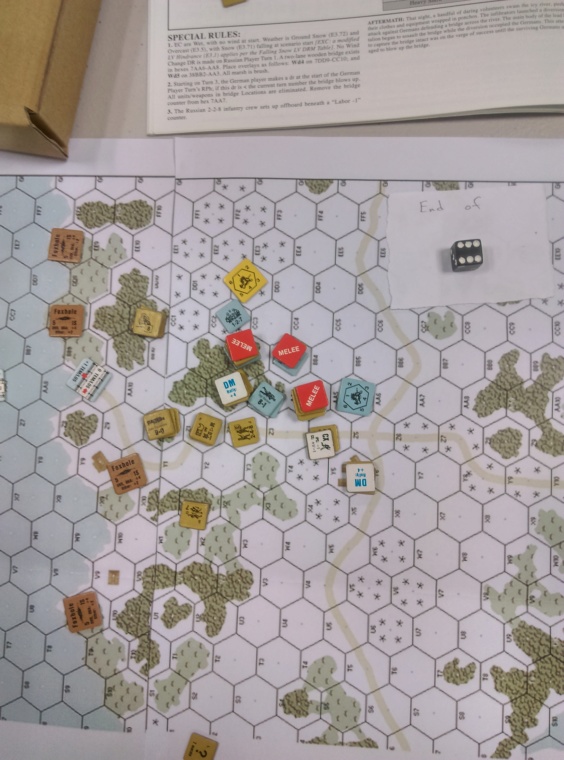 This was an exciting and close game, where (just) enough Germans were able to survive