ASL-134 “Counterattack On The Vistula”

ASL-134 “Counterattack On The Vistula”

ASL-134 “Counterattack On The Vistula”
Last Saturday. Little Wolf and I finished our game of ASL-134 “Counterattack On The Vistula” that we began on May 4. I chose this scenario to give Little Wold the opportunity to familiarize with using half-tracks as well as encountering late war heavy AFVs. I played the defending Russians, whilst Little Wolf played the attacking Germans. German balance (which increases the German CVP cap from 24 to 29) was in effect.

This scenario uses two boards (4,5), and depicts a late war (08/44) German assault on a fixed Russian position using elite troops supported by half-tracks and heavy tanks. The Germans attack with 8 (4x 548, 4x 468) squads, 3 leaders, 5 SWs, 2 PzVIB tanks, 5 SPW251/1 half-tracks, and 2 Opel Blitz trucks. The Russians defend with 10 (4x 628, 6x 458) squads, 3 leaders, 4 SWs, and a crewed 57L AT gun. The Russians also receive 2 foxholes, and SSR4 allows the Russians to use (a maximum of 4) Panzerfausts. On turn 4, the Russiansare reinforced by a lone IS-2 heavy tank. To win at the end of 9 full game turns, the Germans must control building 4P6 and hexes 5Y8 and 5Z9 (both bridge hexes) without losing more then 24 CVPs. SSR2 alters some of the terrain to the effect that 4P6 is a stone building, and there is no woods in the 5W9-5FF7 gully. I noted this on clear plastic and placed it under plexiglass to enable convenient play. First time I’ve done this, but I’ll look to remember this useful technique in future !!!

The Germans really don’t enjoy a big advantage in squads, in fact they’re effectively outnumbered. But the half-tracks offer great tactical opportunities in regards to rapid (and relatively safe) transport and mobile FP. The heavy tanks have powerful guns and thick frontal armor, but they still need to keep a bit of distance with the Russian PF threat and the HIP AT gun can be effective on flank shots or even Deliberate Immobilization (Case G, C5.7) when the range is 6 or less. 9 turns is enough turns to maneuver into positions to reduce the Russian strong-points in detail, so there’s no need to rush it. The Germans effectively have to take a sensible approach to the assault. They have the time and resources to do the job, but need to be careful not to allow the Russians to amass too many CVPs.

I set up the Russians with a group of 3 458s defending around 4P6, 4 628s defending the board 5 woods road, 2 more 458s in deeper positions, and the final 458 with the HMG and 8-1 leader in 5FF6 as an over-watch position. I put the 2 foxholes in 4Q6 and 4S5 to allow units to fall back from 4P6 when the time comes. The general idea was for the 4P6 group to buy time, whilst the rest conducted a fighting withdrawal back to the bridge positions. Hopefully enough would survive to point defend the bridges with the HMG and reinforcing IS-2 covering the open ground above. Another technique employed in this playing was using a double-wide ASL board (in this case, 1A from AP#6) to set up off-board entry on. They are quite ideal for this, so I’ll try to remember this technique, too… 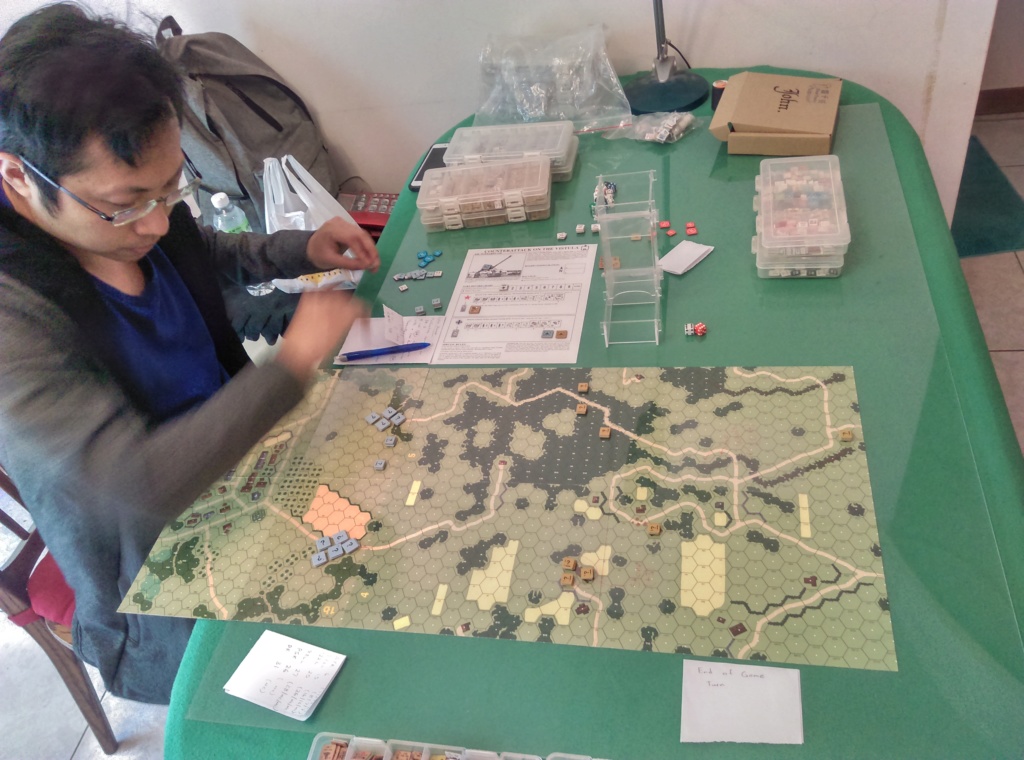 In turn 1, Little Wolf brings on the Germans at a brisk pace, but is careful with the heavy tanks. My ATRs take some shots at half-tracks, and my 628s fall back a little in the woods. No casualties as of yet. 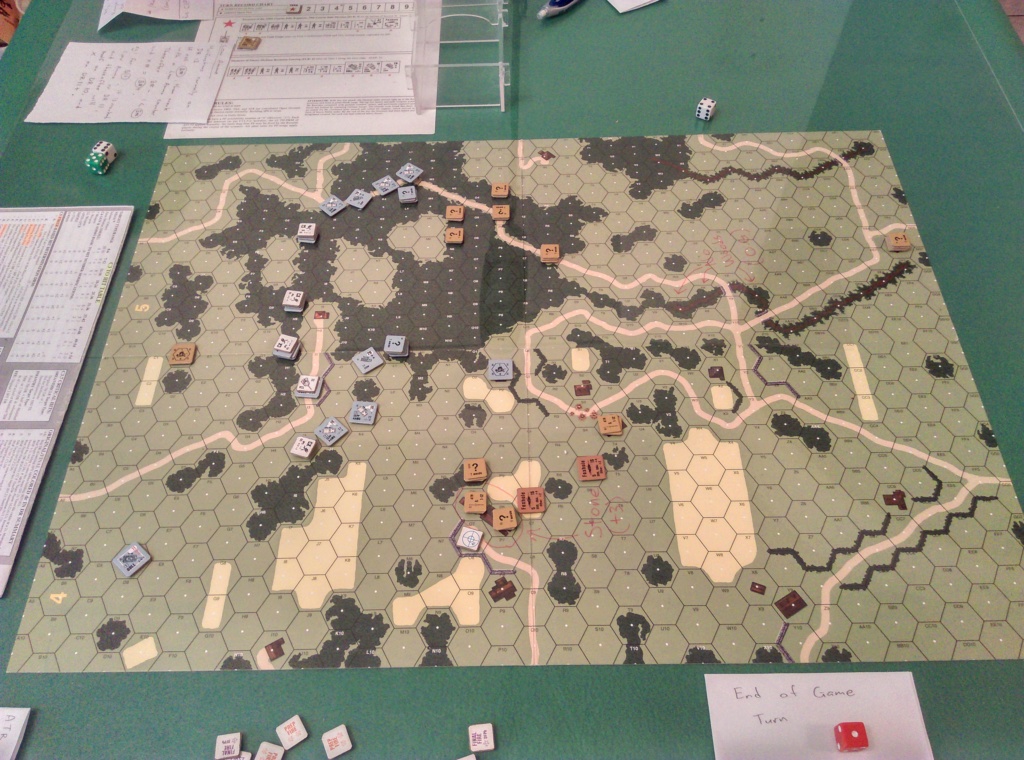 In turn 2, the German attack splits onto two prongs, one advancing through the board 5 woods, but without pushing too quickly along the road, whilst the other advances sensibly on 4P6. Meanwhile, the Russians successfully kindle 4R6. By the end of the turn, it looks like Little Wolf is forming up for an armored assault on 4P6. Still no casualties… 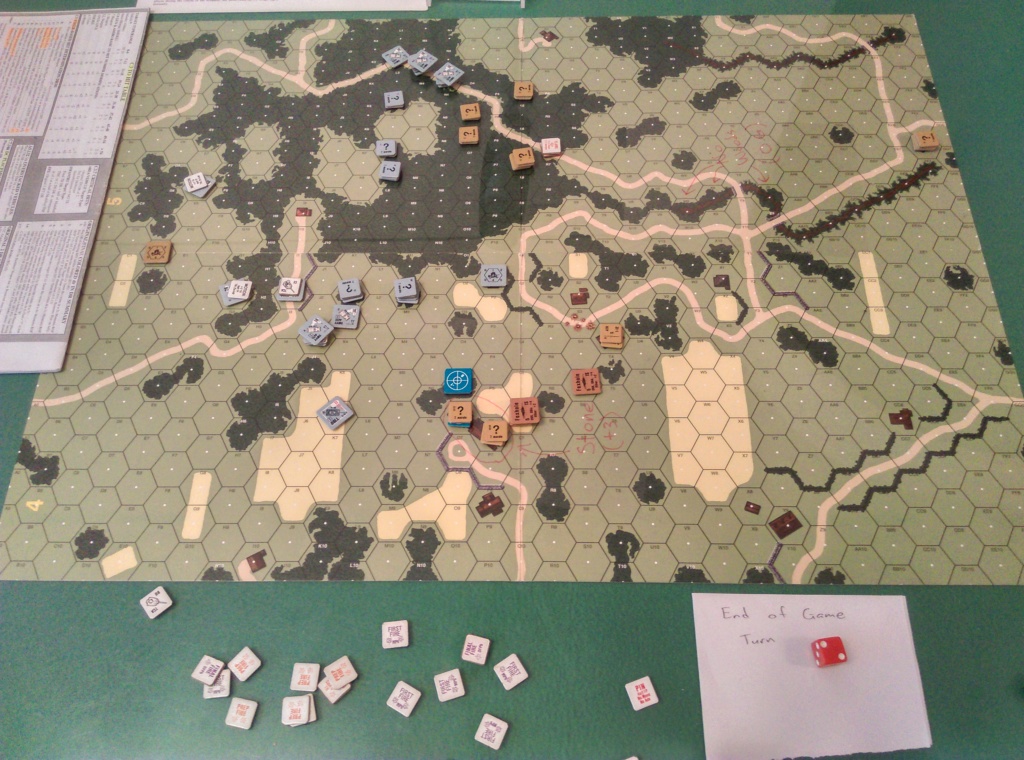 In turn 3, the Germans surround 4P6, and the Russians decide not to be martyrs to an unnecessary cause, slipping out of the cauldron while they still can. On board 5, a blaze develops, and with the help of the Dry EC (B25.5) begins to spread. Each side has lost a sole half-squad. 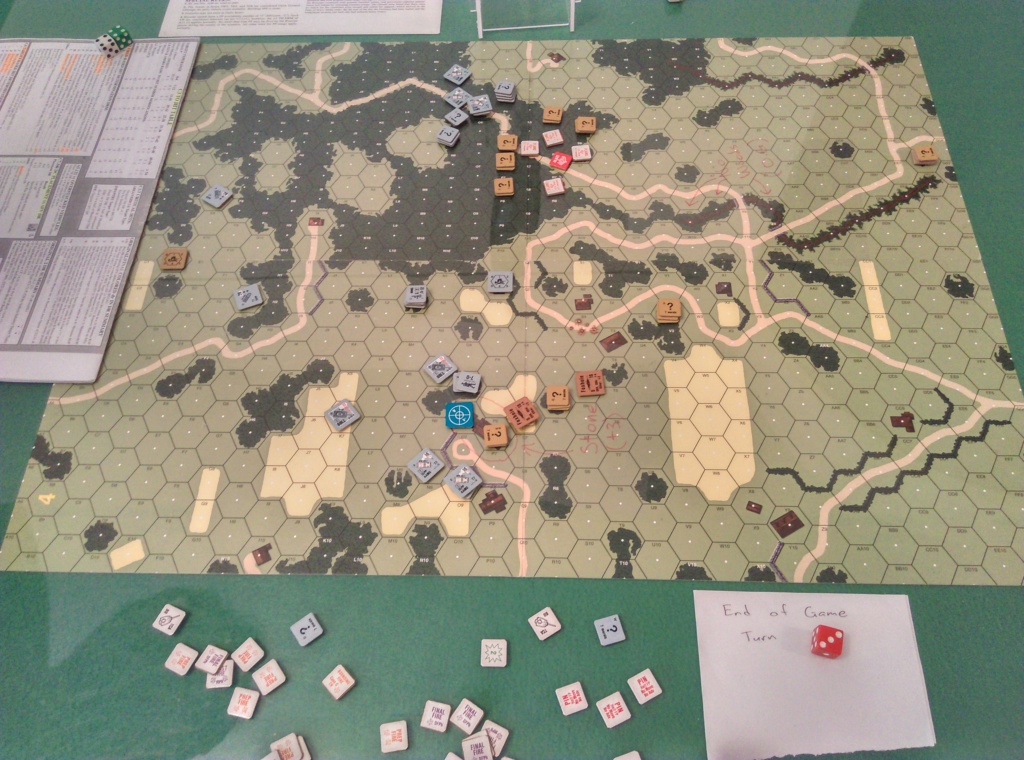 In turn 4, the 3 half-tracks on board 5 try to move through the woods, one bogs, but the other 2 manage to break through, which saves them a ton of time of going back down and around. On board 3, the Russians are still trying to extricate themselves from 4P6. By the end of the turn, the IS-2 has arrived to harass the half-tracks. 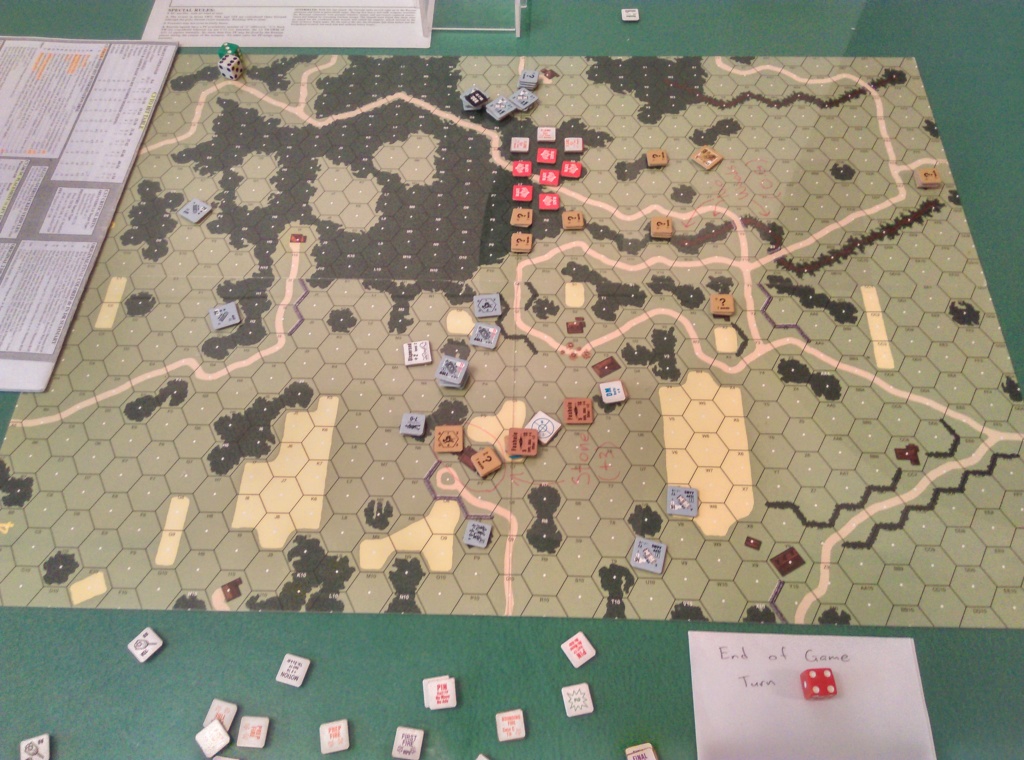 In turn 5, the bogged half-track frees itself (albeit at the cost of all its MPs), and the German successfully surround and eliminate the board 4 withdrawing Russians. A big part of their success is due to the half-tracks cutting off routs, and a total of 4 Russian squads are eliminated. 4P6 is completely abandoned now, its control will be a mere formality for the Germans. 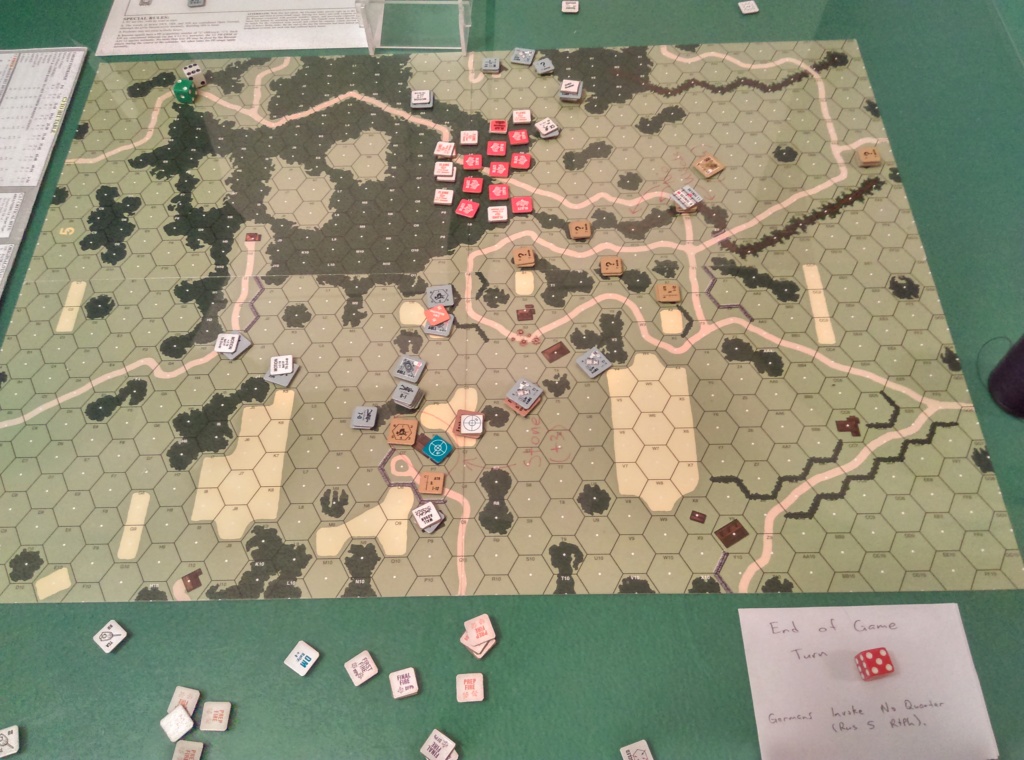 In turn 6, there is more heavy action. The IS-2 hits and burns a half-track, German infantry bump into and reveal the HIP ATG (in 5Y4), but for it’s parting blow, another German half-track is set ablaze. One PzVIB immobilizes on it's Mechanical Reliability DR (D2.51), and will forevermore remain in 4O4. The German 9-2 and its Panzerschreck (PSK) armed squad have got within range of the IS-2, and I was hoping that a burning half-track might provide enough cover for my IS-2 to withdraw under, but it wasn’t to be as a crisp TH DR hits and burns my sole IS-2. This is where we ended the afternoon’s play, with the Germans controlling 4P6 for the cost of 11 CVPs. The Germans would need to control both bridge hexes with 3 full turns to go. 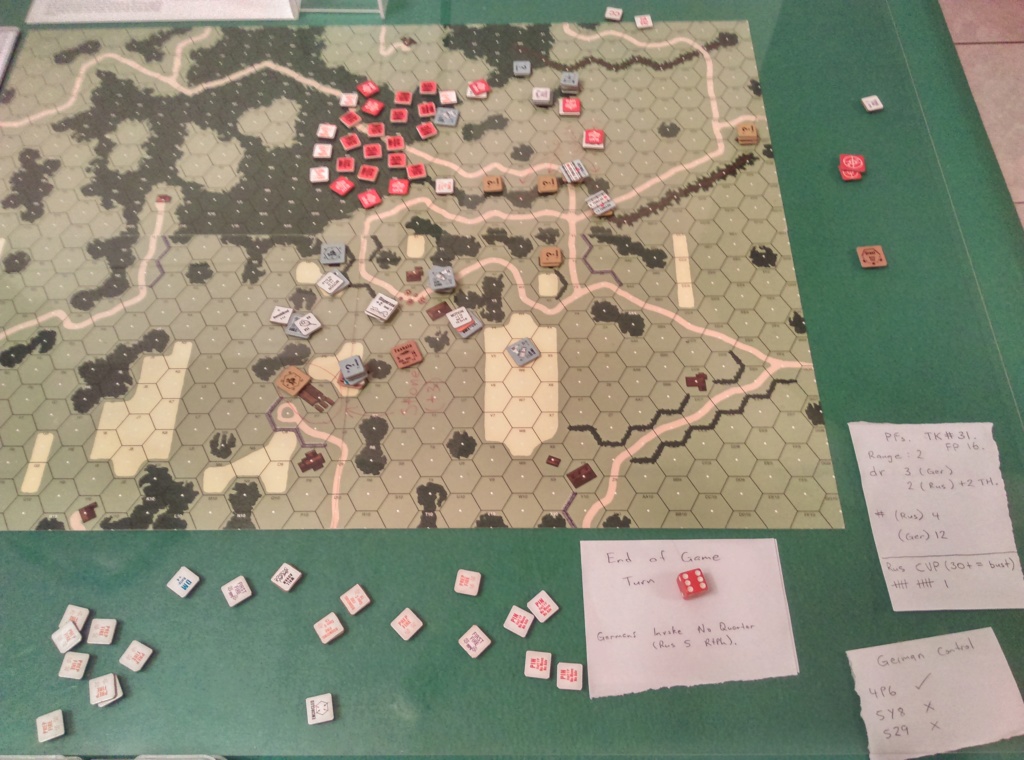 In turn 7 (resuming on the afternoon of June 8 ), the Germans resume their advance on the bridges, but it doesn’t go well for them. They lose a squad (KIAed by the 5FF6 HMG team) in the MPh, and get bogged down in CC with a lone 628 in 4X1. Meanwhile, the PzVIB malfunctions its MA whilst attempting to silence the Russian HMG. No great progress at all for the Russians. By the end of the turn, 2 German squads have been lost for little gain. 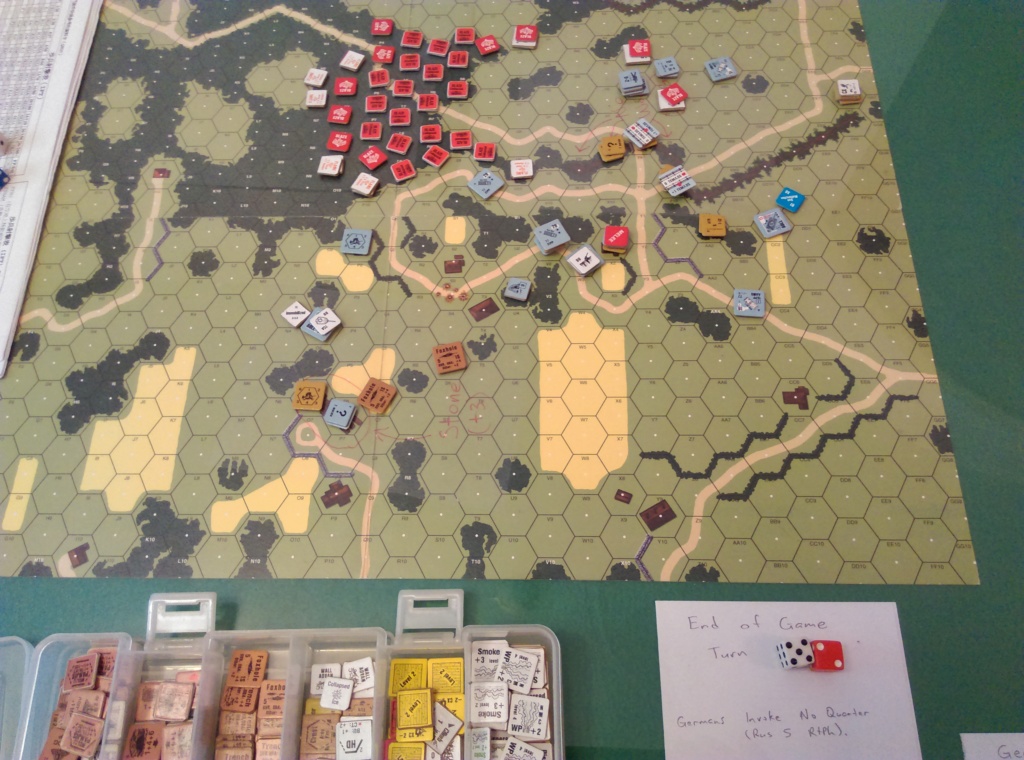 In turn 8, the half-tracks surround and encircle the HMG position, but meanwhile, the supporting German infantry take the worst of the close range firefight. Of the assaulting squads, all but one squad breaks (this squad goes Berserk). The PzVIB eventually disables its MA, so its as well for the Germans that the half-tracks are at least keeping the Russian HMG squad occupied. The 628 squad in 4X1 continues to attrition the German infantry sent to CC it…. 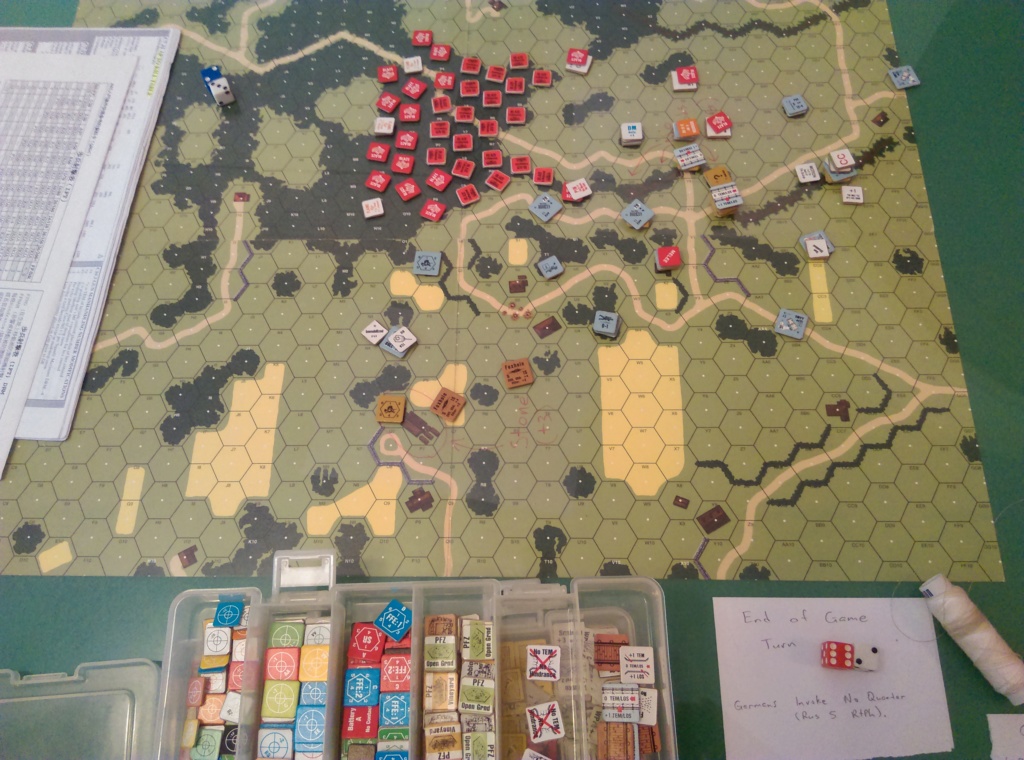 In turn 9 (the final turn), the berserk squad survives all fire, but all but only one German squad is in position to advance into 4z9 (by virtue of passing a 2MC without pinning). However, Little Wolf enjoys a golden AFPh, and breaks all of my remaining bridge defenders, which allows him to advance into and control both remaining objectives in the final APh. In my turn 9, I am unable to rally any units, and with my only remaining squad tied up in a melee, I have no means by which to re-capture any of the objectives. My only unbroken unit eventually emerges from CC as a victor, having devoured a leader and 3 squads, but it is the Germans who emerge victorious at the end of 9 turns. The blaze that you see on board 5 managed to use EVERY Blaze (including Hut Blazes from the Rising Sun module) in the counter mix !!! 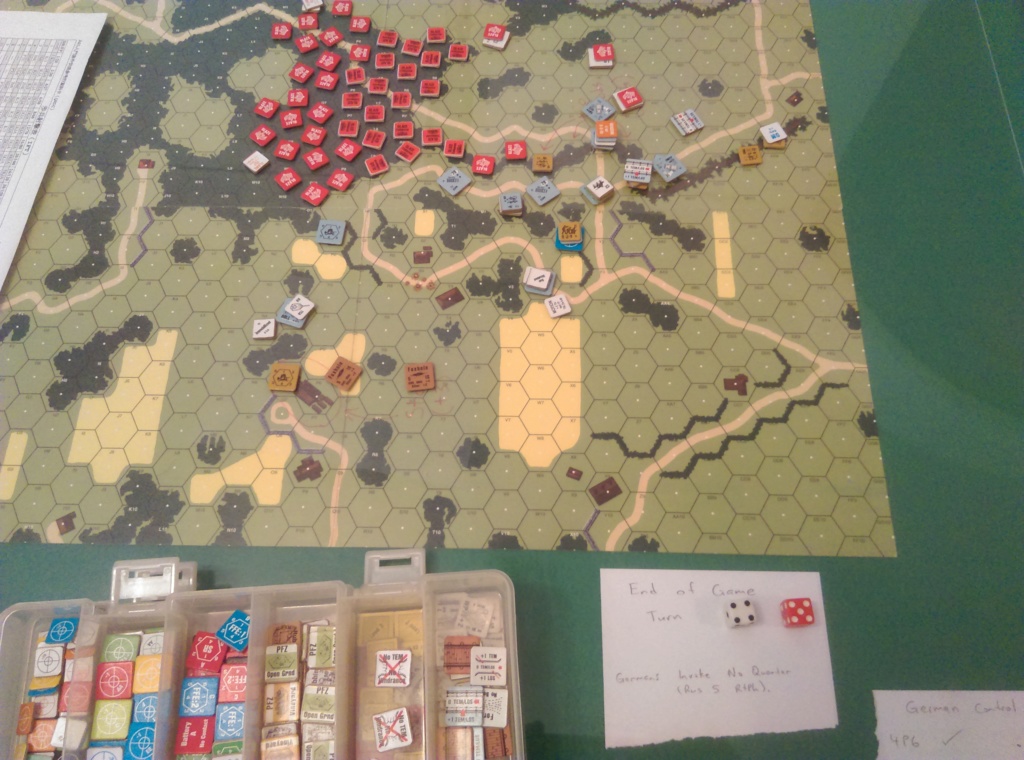 A great game that was decided in the final turn.