Yesterday afternoon, Little Wolf came over for some ASL. I wanted to give Little Wolf some more practice with mortars and Spotted Fire (C9.31), so the scenario I chose for us was ASL-100 "Regalbuto Ridge". Little Wolf chose the attacking Germans, whilst I played the defending British. We played the scenario as is, with no balance in effect.

In this scenario, the German wins by having more squad-equivalents on board 2 hill hexes than the British, with those on level 3 counting double. The Germans have 6 838 squads, 14 468 squads, 8 leaders, 7 SW, an 81*Mtr and its crew. One of the SWs is a radio, which by SSR4 allows its operator (with successful Radio Contact, C1.2) to act as a Spotter (C9.3). The British get 14 458 squads, 5 leaders, 8 SWs, a 76*Mtr and its crew. So both sides have 8 morale squads and good leadership, but all woods are brush, which means that there is little cover and Rally Terrain (A10.61), so it can be tough going for the attacker. To save ourselves the burden of having to remember that the woods were brush (SSR2), I printed 4 A4 sized VASL map sections and set them up parallel with actual boards, so we could play on the printed map, and conduct LOS checks with the actual boards. 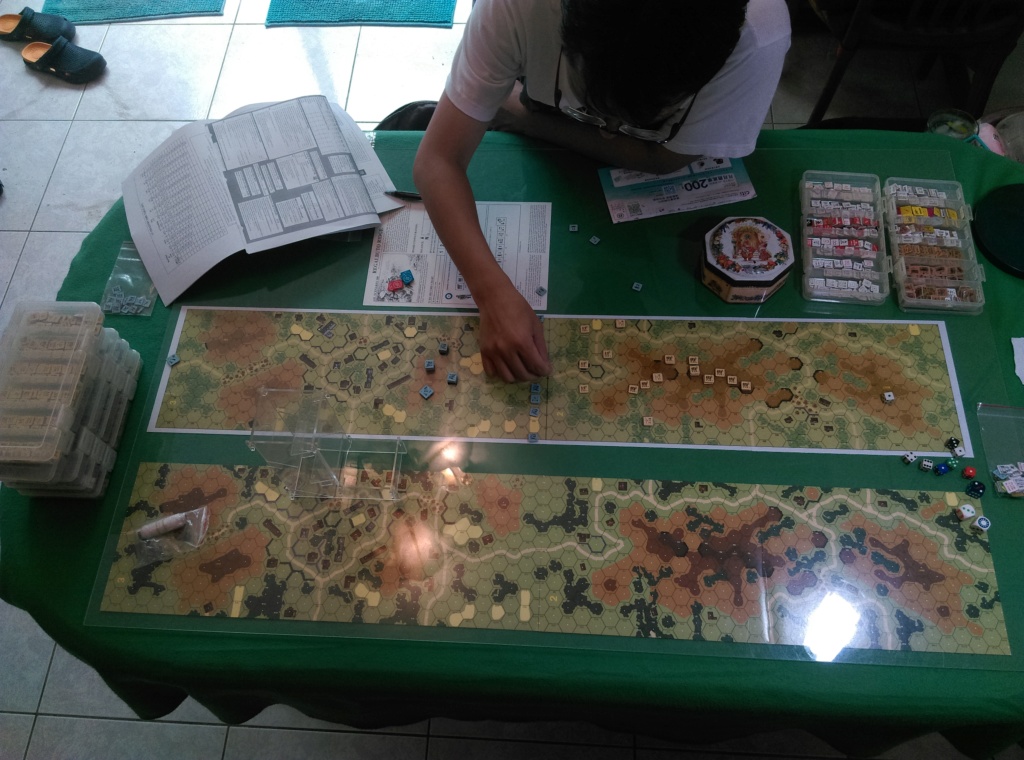 I deployed 2 squads and placed the half-squads in the westernmost buildings of board 2, with most of the remaining squads preparing to entrench on the hill. Little Wolf set up close to board 2 border, with the 81*mtr on a level 2 hill in 3W7, and had the radio (and 8-0 leader) in level 2 of 3N2. In the first turn, The Germans used smoke and calculated aggression to try to clear out the outlying buildings and get a toehold on board 2. The Germans initially take a number of casualties, and several break as Little Wolf experiences some less-than-stellar MC DRs. This gives the British time to Entrench (B27.11), although I only manage 1 from 8 attempts (many with leader assistance), as you can see by the 7 remaining Labor (B24.8 ) counters !!! 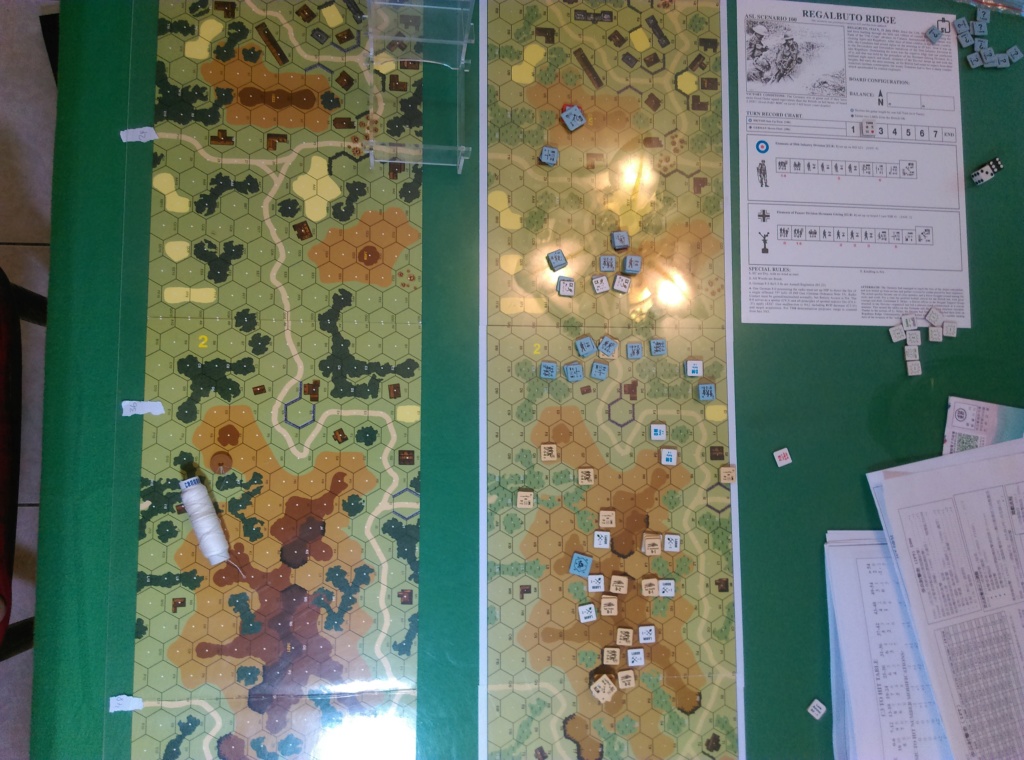 By the end of turn 2, the Germans now have the westernmost buildings, and with that a toehold to push up on to the hill. At their second attempt, the British are a lot more successful with their entrenching. 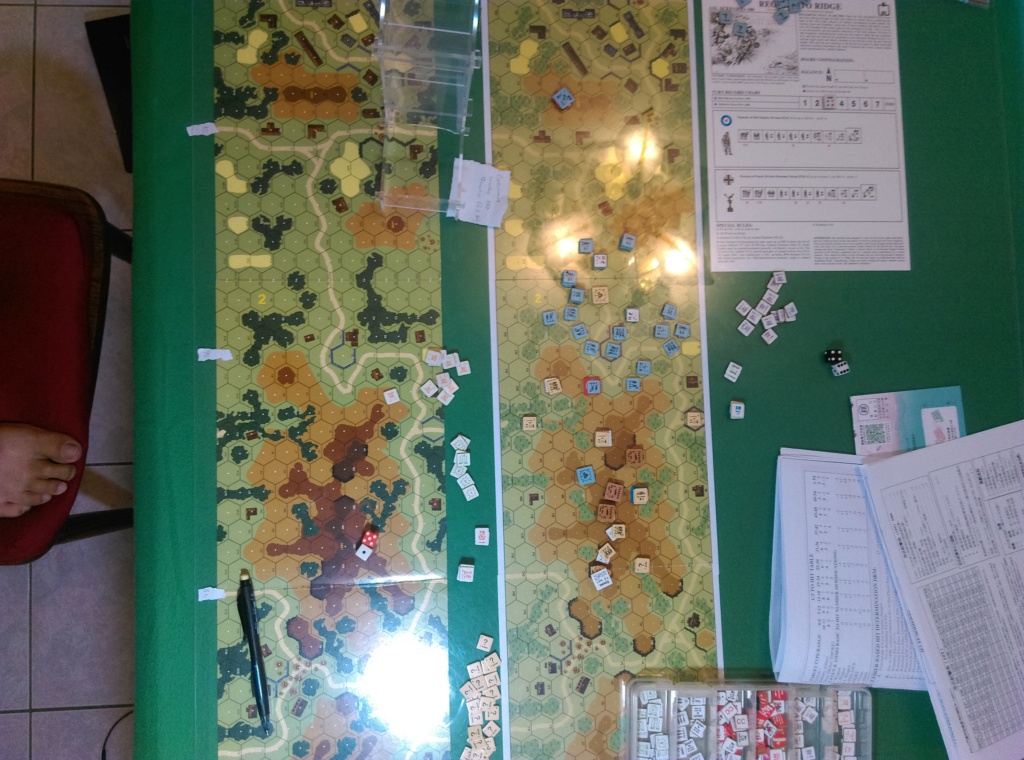 During turn 3, the Germans push up on to the western side of hill 621, but the British have managed to silence the German MG nest 'deathstar' (9-2, MMG/468, LMG/468), and they are to remain quiet for quite some time. 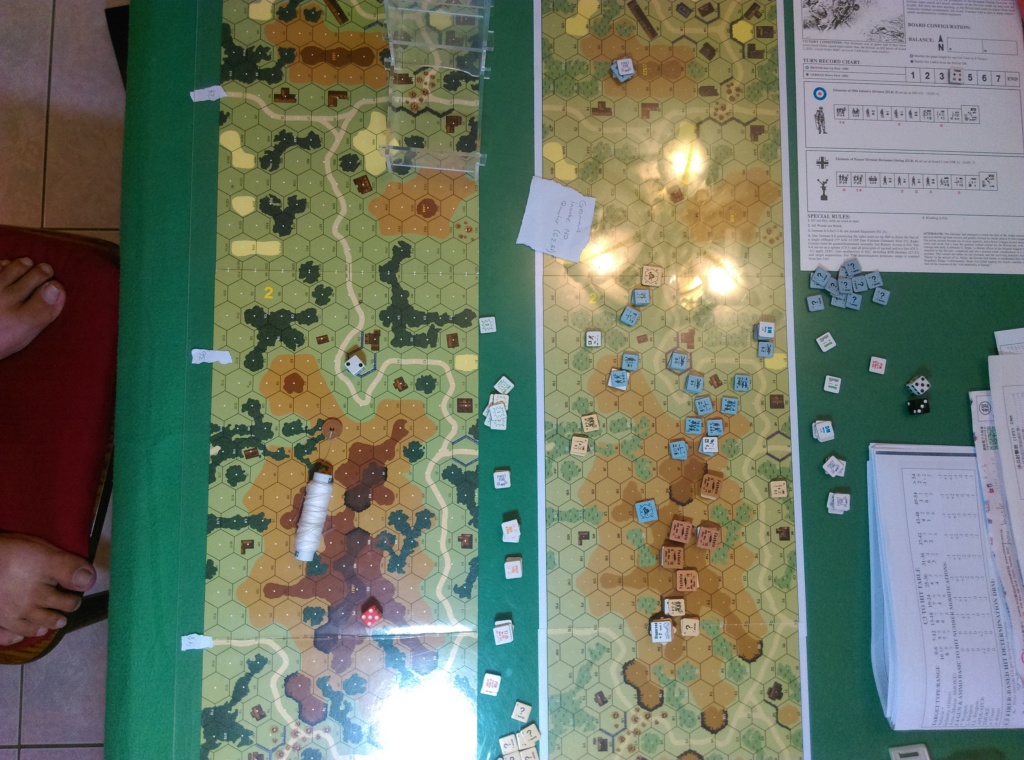 The Germans are generally having a hard time of it trying to stay in good order on the hill. But a Berserk half-squad is able to charge into K4, which allows an 838 to easily enter the foxhole and kill the defending 458 in CC. Otherwise though, by the end of turn 4 the British are still holding firm. 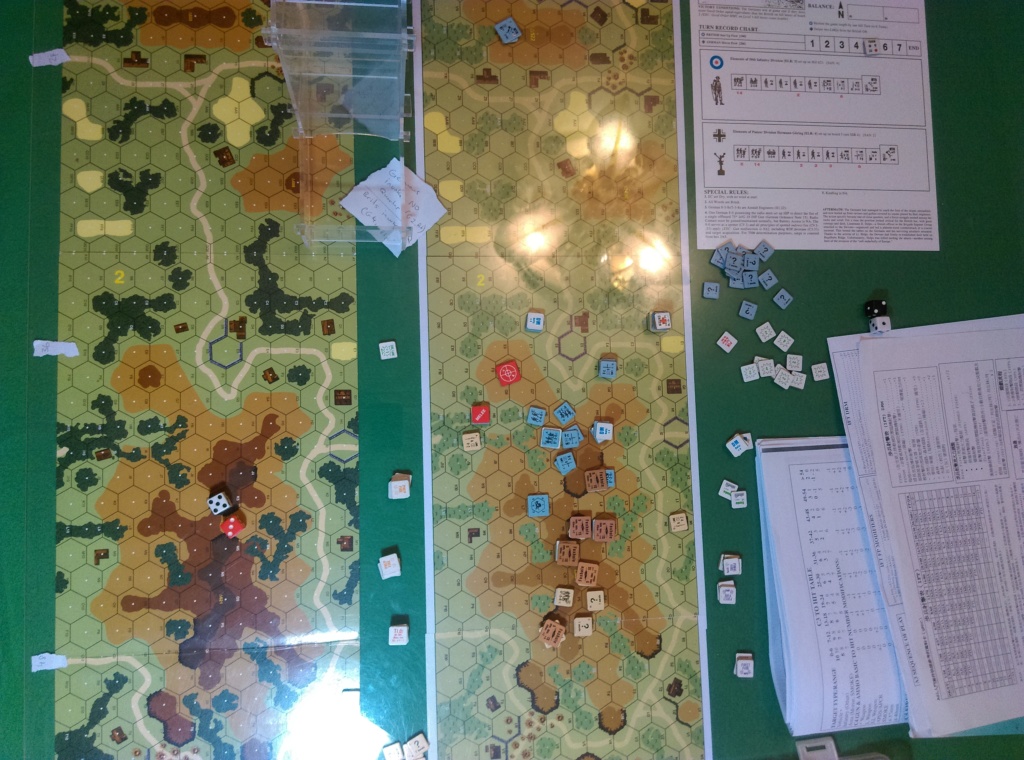 During turn 5, the British hammer the Germans hard, demonstrating the advantages of foxholes. The Germans lose their 4th leader..... 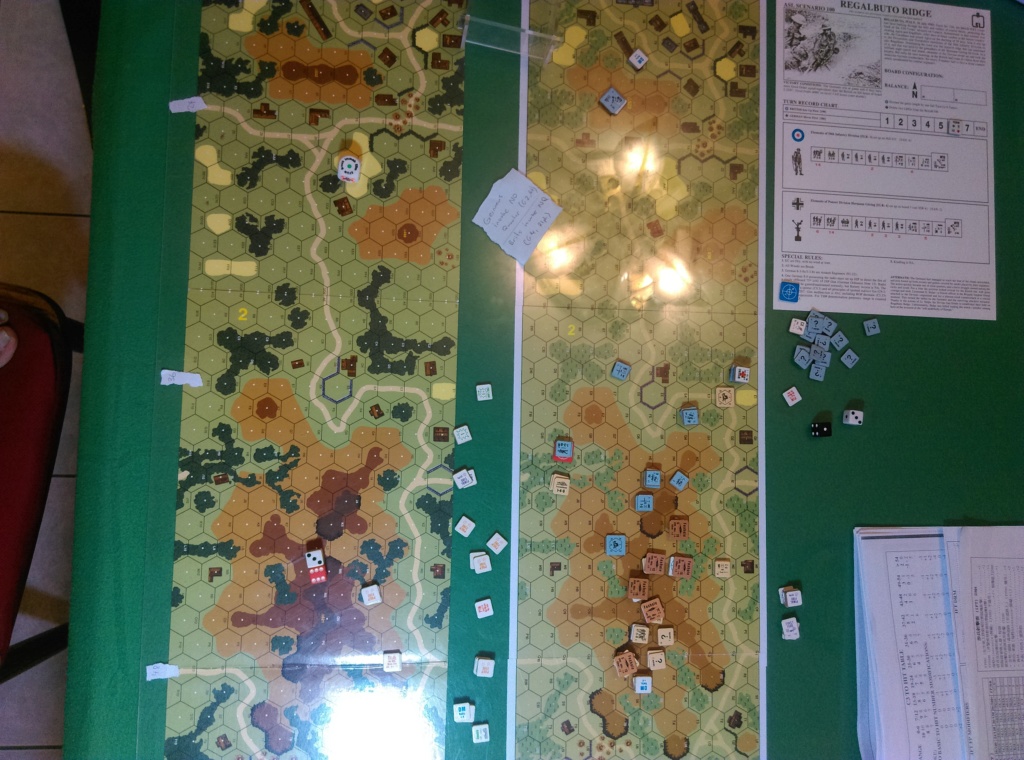 In turn 6, the Germans continue to put whomever they can on the hills. They will have to both hang on in the open and break some of the British squads at level 3. 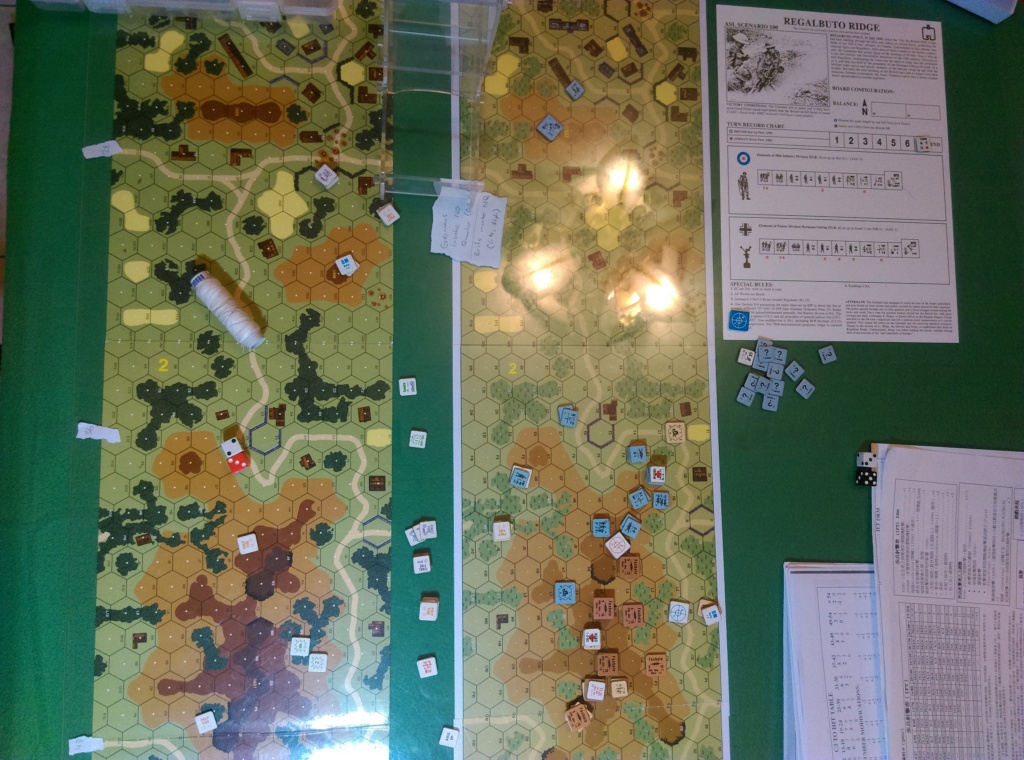 In the last turn, Little Wolf moves all that can on to the hills, and puts 3 squads at level 3, which means that they have NO cover. At the start of the final player turn (after counting MMC at level 3 double), the Germans have 11.5 GO squads on hill hexes to the British 10. In my PFPh, I break 2 of the 3 German squads at level 3, reducing them to a total of 7.5, and having just rallied a broken squad in 2M1, I try to get 1 more squad onto the hill for good measure. Unfortunately for me, the 81*Mtr goes on a bit of a ROF tear, which breaks 1 squad, half-squad and crew. I advance 1 more squad to level 3 in the final APh, leaving me short by a half-squad; 7.5 German squads to my 7. 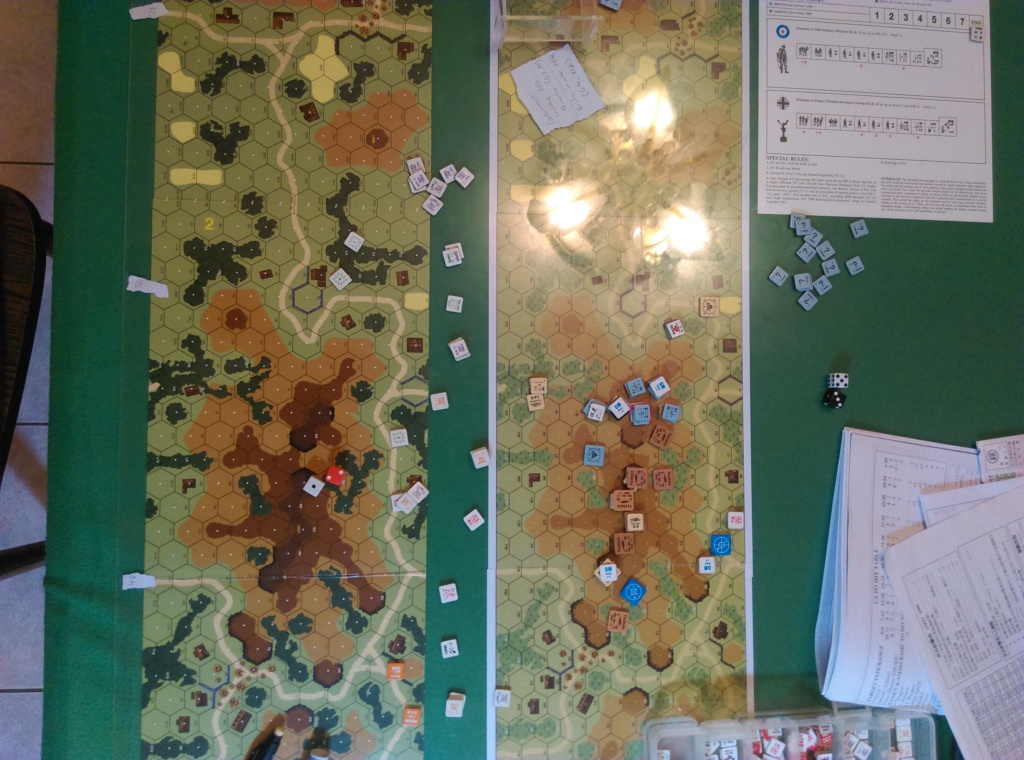 The game took about 5-6 hours to play, and we got full value for it, as it went right to the end.