Last Saturday afternoon, Little Wolf visited my home for a game of ASL. The scenario played was ASL-183 "The Pouppeville Exit", with Little Wolf as the attacking Americans, and myself as the defending Germans. American balance (add an American 149) was in effect.

Despite being outnumbered, the Americans enjoy a big advantage in troop quality. But they have to do quite a bit in 8 turns, and casualties to the Americans will make even harder work of their objectives. The German ELR of 2 will likely lead to a lot of unit replacements, and the modest German leadership will struggle to get them back into the fight in time. The Germans have to look to delay for time. The 2 buildings should fall to the Americans within the given time, as should the gun in 3U2. But the gun in 3N7 might take a bit longer to clear, and I think that the Germans need to regard this as the 'Alamo' position.

Once more, I used printed VASL maps to take care of SSR terrain changes (some board 3 hills are regarded as marsh), with the actual boards alongside for LOS checks. Other than gun CA, the Germans don't really have much choice in regards to setup, so play is underway pretty quickly in this scenario. 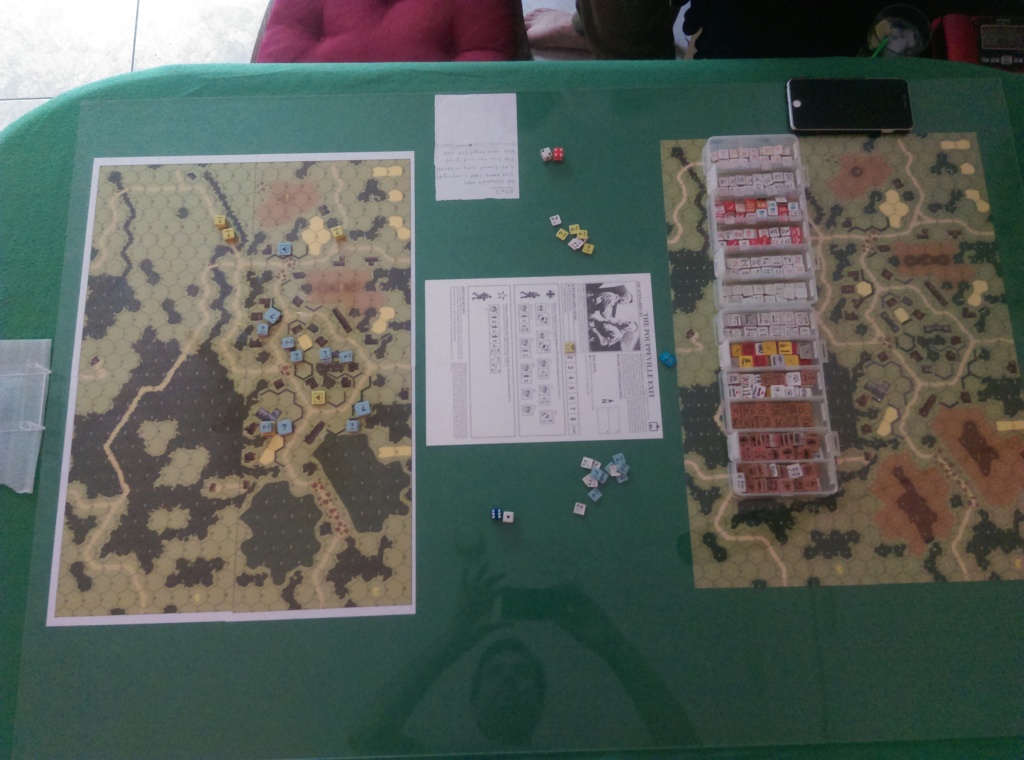 On turn 1, Little Wolf deployed a number of American squads, and moved out of LOS, and advanced (concealed) into LOS. After doing nothing in its PFPh, the gun in 3U2 was attacked by the 10-2, mmg/747, 747 adjacent for a 36+0, and broke, somewhat lucky to escape with its life. I deployed 1 of the 436s, which despite several attempts, would be one of my only 2 successful deploy DRs of the game. I probably should have moved the Kfz 1 on turn 1, but forgot. 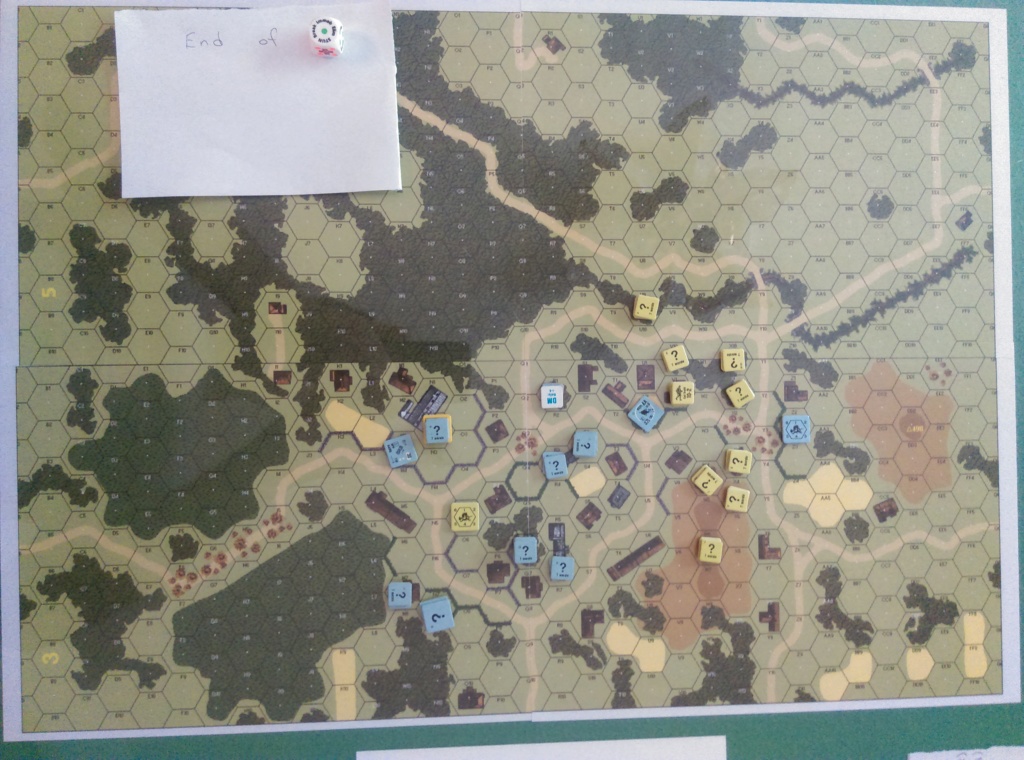 On turn 2, Little Wolf discovered that deploying into half-squads had somewhat depleted his ability to inflict MCs on the German units, and as a result, I was able to greatly strengthen the defense around the 3R5 building. In actual fact, most of the concealed units are 236s, but they do well at growing concealment and simply slowing the Americans down. 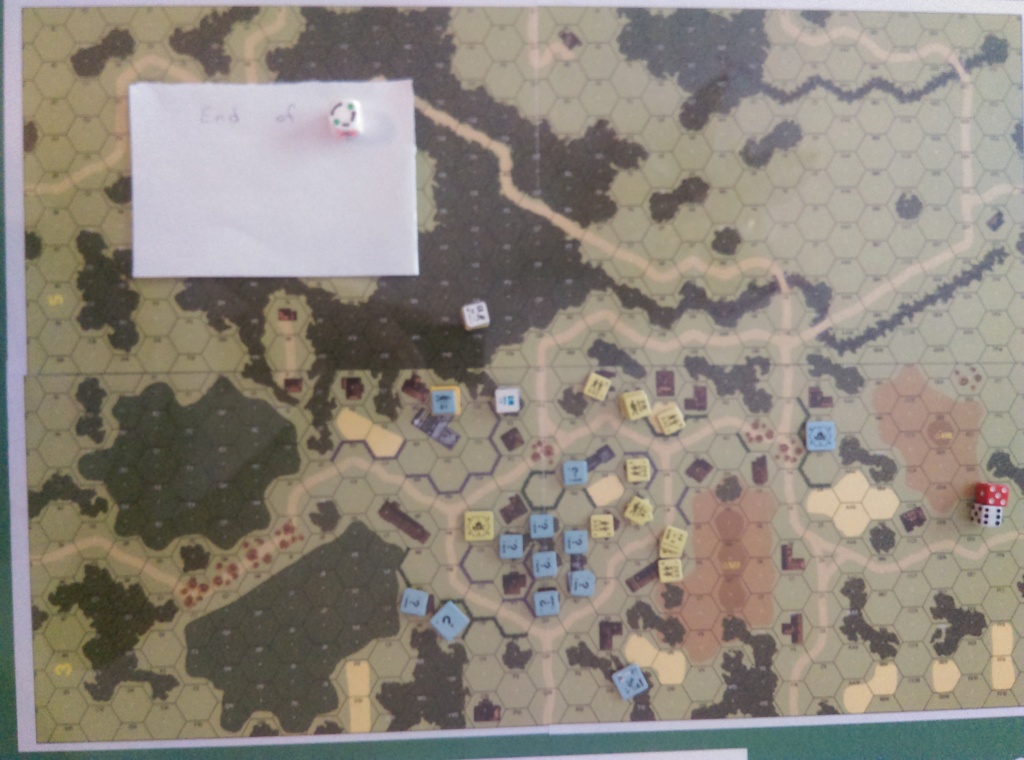 On turn 3, the Americans had to re-group a bit and rally some broken units. The 10-2, 149, and MMG/747 formed a 12FP@-3 'deathstar', and KIAed a 437 defending 3R3, which left the Americans in sole possession during his PFPh. But outher than that, there was not a lot of bold movement from the Americans. 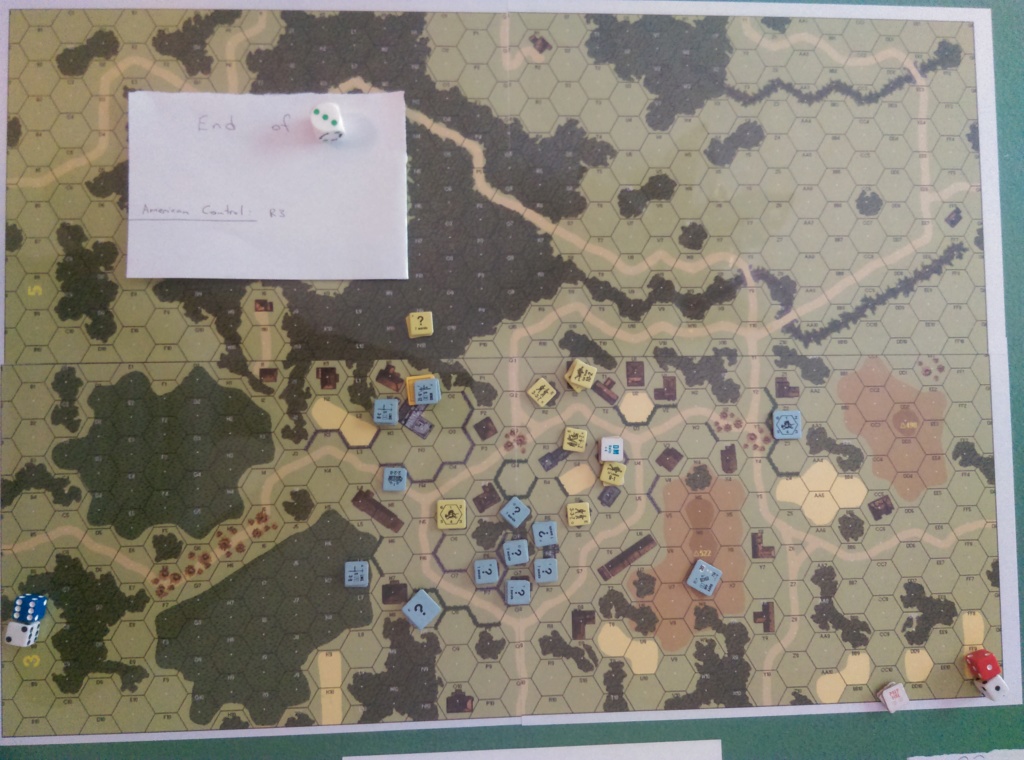 On turn 4, a HOB rally results in a fanatic 337 and another 149 hero. Little Wolf has now recombined many of the half-squads, and at the half way mark, he has half of his objectives. I reinforce 3M2 with a LMG squad, and now have 16FP@-1, a 'deathstar' of my own..... 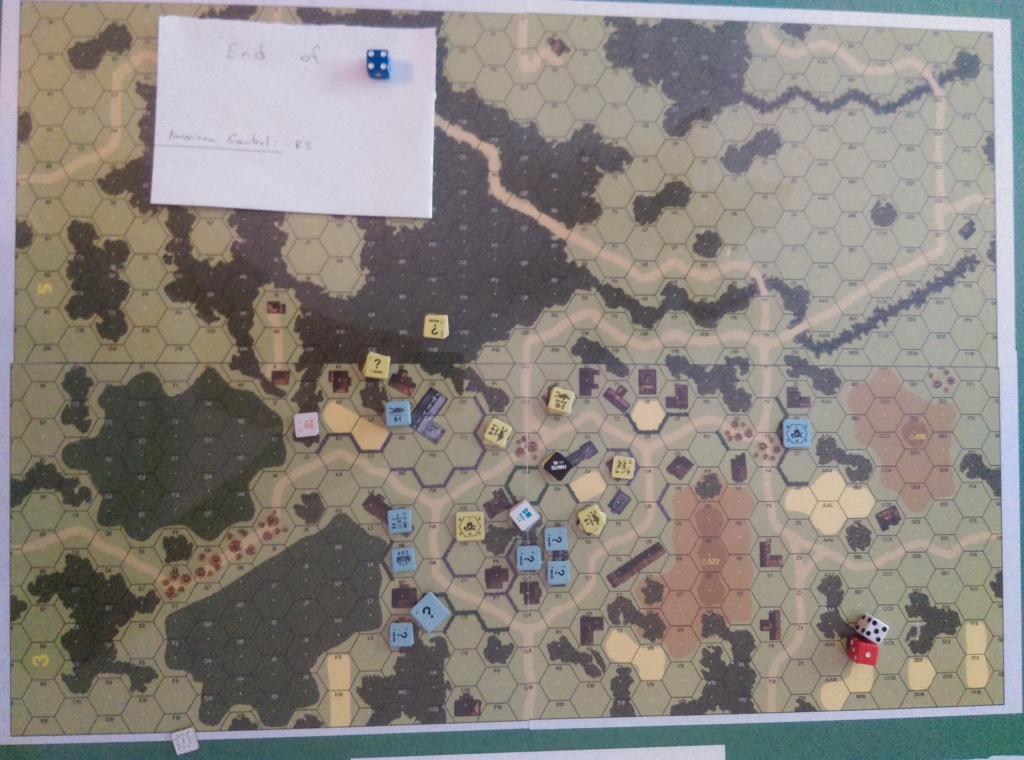 On turn 5, the Americans charge 3M2 from 3 sides, and when my attacks do virtually nothing, the American overwhelm all my defenders and capture 3M2 by the end of the turn. An ugly turn for me, as my deathstar did nothing at all. The 3R5 building is holding out for now, but the Americans now only need to silence the last gun in 3N7 to win. 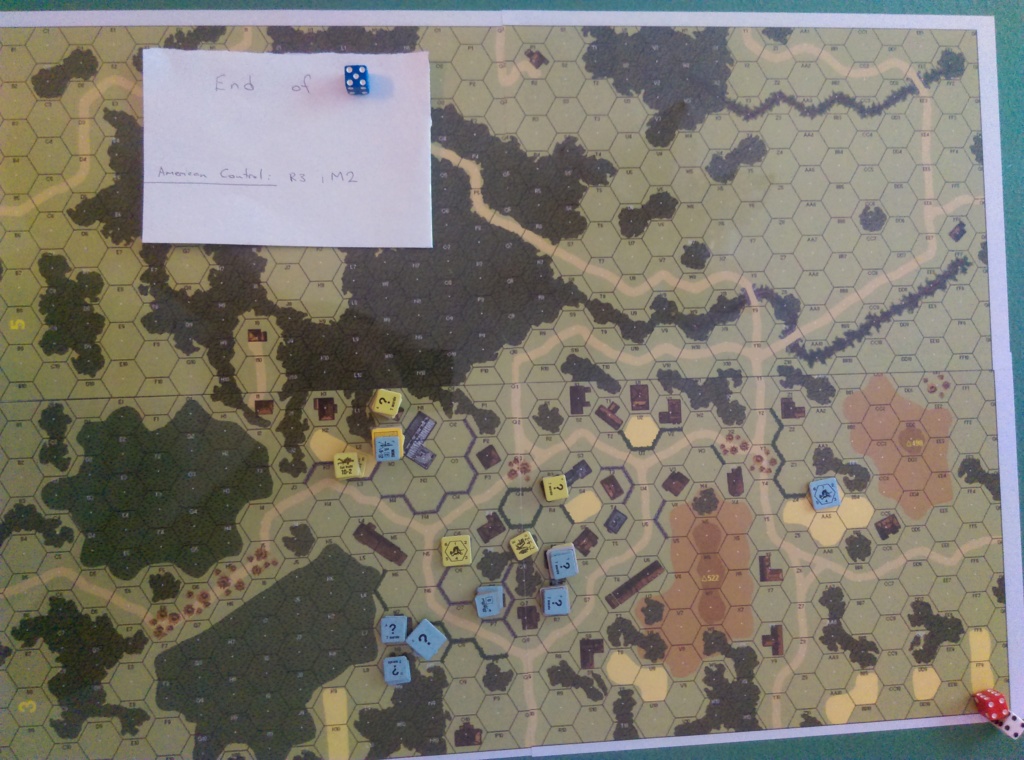 On turn 6, the Americans take up positions in the 3M5 building. Victory is calculated at the end of each player turn, so the Americans need only break the crew to win. Unless my AA gun can break some Americans, I will need some luck to hold out for 5 fire phases. Just like the other gun, it barely scratches the paint on the building, and Little Wolf clinches victory for the Americans by KIAing the last gun and its crew on a 12@-1 shot rolling [2,1]...... 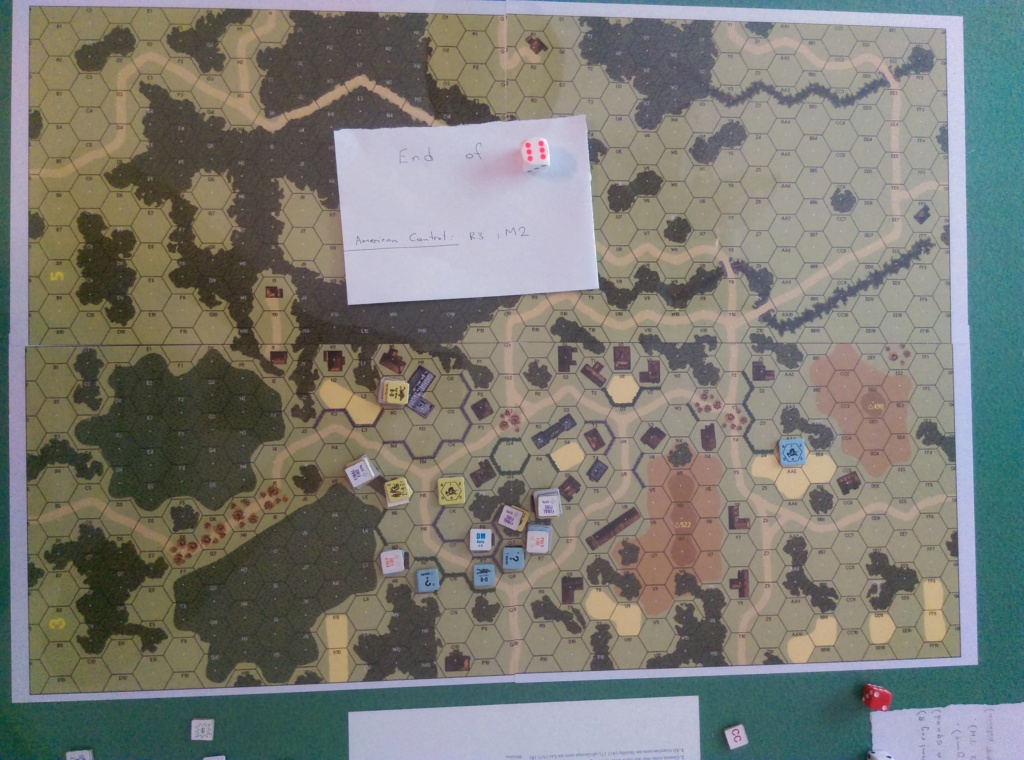 After 2 turns, Little Wolf realized that deploying heavily didn't leave him with the FP he needed to clear the buildings, but fortunately for him, he was able to recombine his half-squads. My key FP units were quite flat, and the undeterred return fire quickly led to a German collapse. I got clearly out-diced in this game !!!