Last Saturday afternoon, Little Wolf visited my home to play some ASL. He was keen for more infantry and guns, and we had previously penciled in ASL-188 “Zon With The Wind”, so we played that one first. I set up as the German defender, and Little Wolf attacked as American.

This scenario depicts an infiltration action, with the Americans attempting to exit about a platoon off the south center of board 24 (with Q1 being north). The Germans defend with 5 squads (467, 4x 447), 3 leaders, 2 SWs and 2 crewed 88L AA guns. The Germans also get 5 dummy counters and 2 trench counters (although the trenches work out to be more of a liability than an asset). The Americans attack in 2 groups entering along the north edge, a small group on turn 1 comprising of 4 747 squads, 1 leader, and 1 SW. On turn 2, the Americans enter their larger group consisting of 7 747 squads, 2 leaders, and 3 SWs. To win (immediately), the Americans must exit 7 VPs off hexes P10-R10.

SSR 2 has it that the German gun must set up in the trenches, and may only use HIP in woods hexes, which minimizes the German ability to keep the gun HIP, as their betraying trench will be revealed as soon as a GO enemy unit has LOS to it. The guns are a powerful asset in the German defense, they can deliver heavy damage at long ranges. The crews are very vulnerable to CC, but the Americans will need to get there first. The Germans are basically outnumbered about 3:2 (I consider a crewed gun to be the rough equivalent of a squad), so need to buy time and block the rather narrow exit area. The Americans will need to use cautious aggression, and try to wear down the German force to the extent that there is not enough remaining to block the American exit.

I put the guns in P7 and T9, think that they had the most dominant LOS from there. I had all my squads in upper building levels, so that they could see out of the valley and be able to hit the turn 1 group hard. 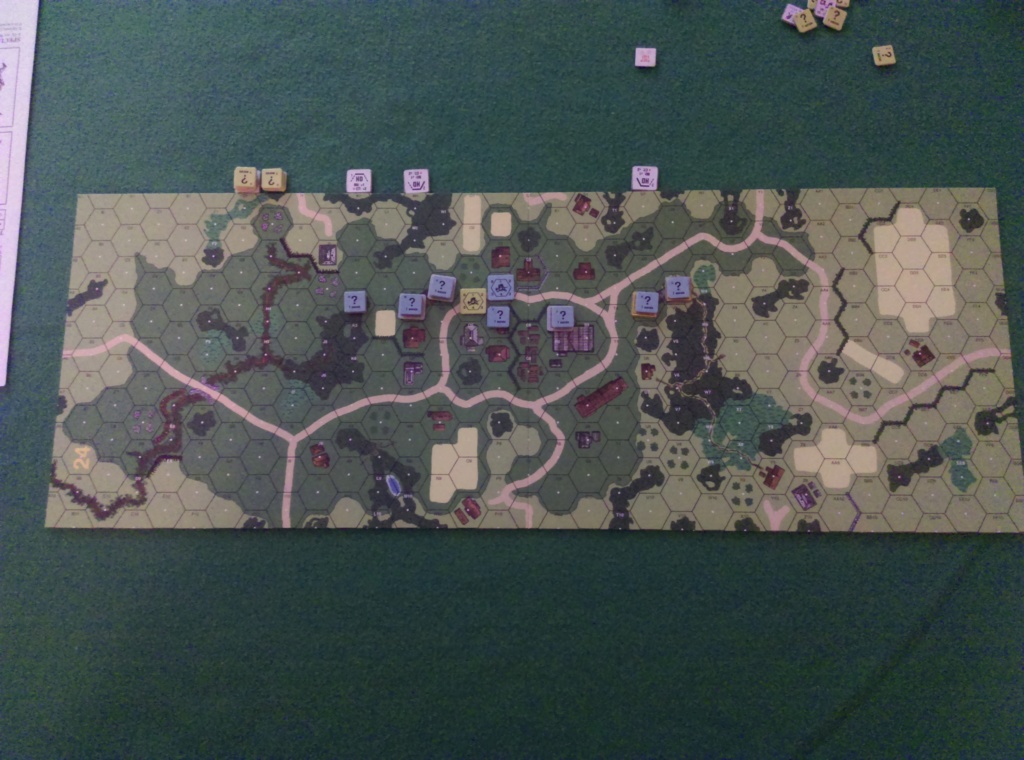 I pointed out to Little Wolf that he should take it cautiously on turn 1, and focus on survival above all else (we should have played with American balance in effect, but forgot). In spite of this, the Americans got hit really hard with ALL of their units breaking. 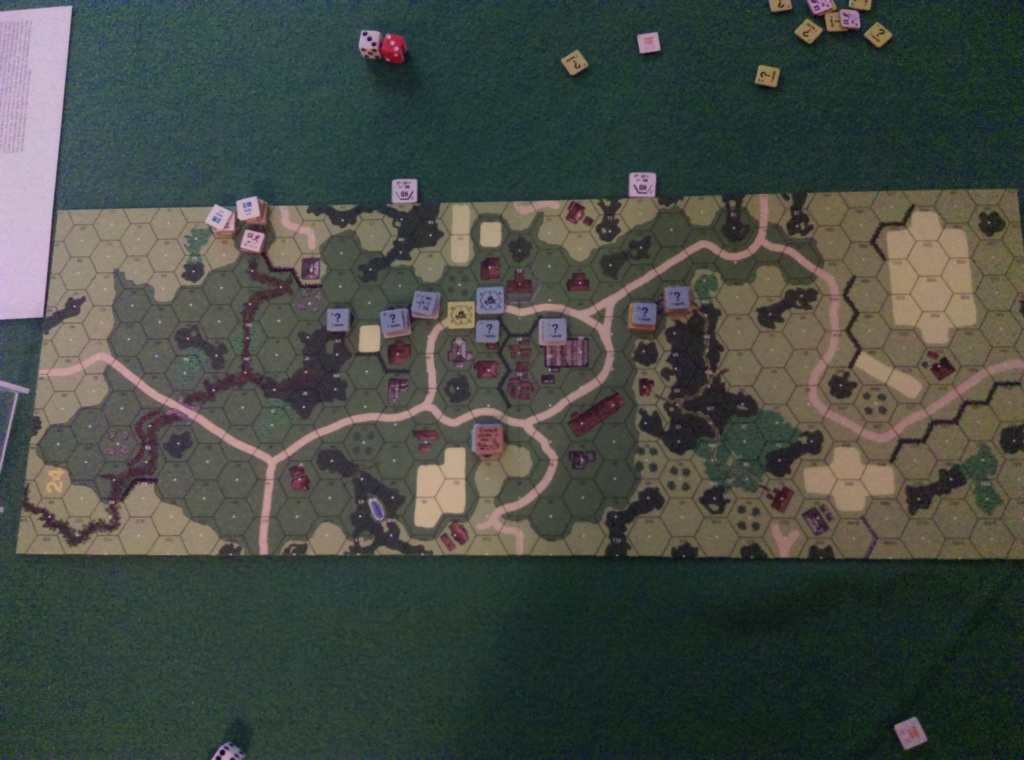 On turn 2, the larger group enters, but the punishing German fire continues, and when the 9-2 rolls a 12 MC and fails the wound dr, the Americans are really on the back foot. 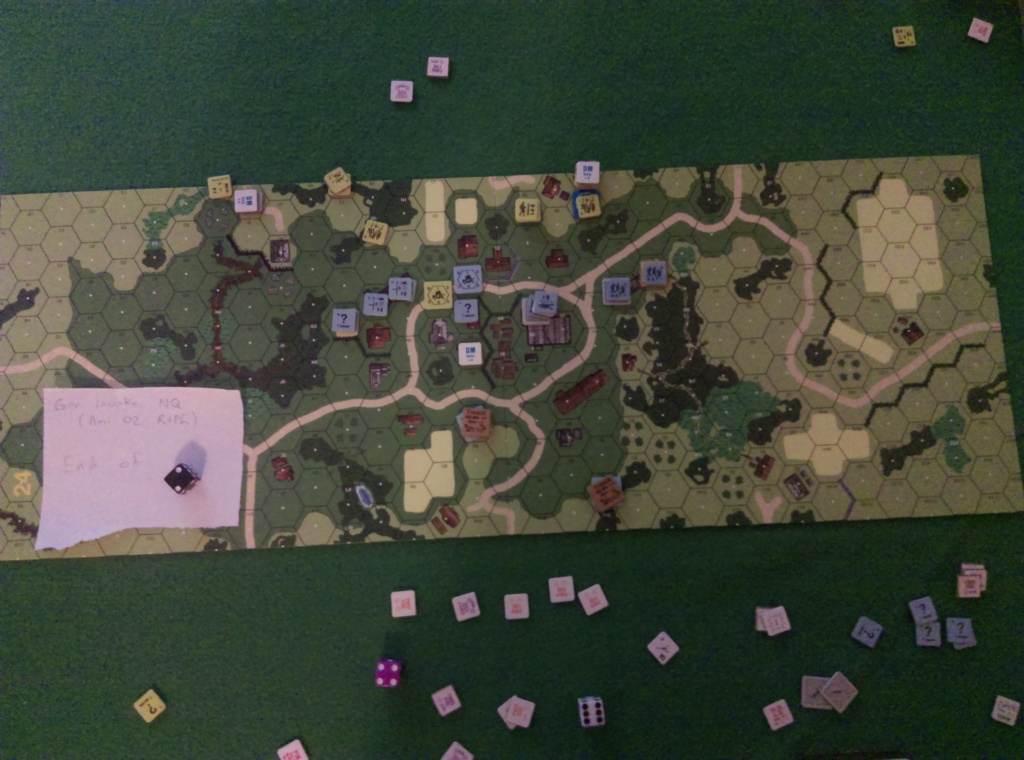 On turn 3, the carnage continues with more American units breaking. Little Wolf keeps up his fighting spirit nonetheless, which I think is most admirable in the circumstances !!!! 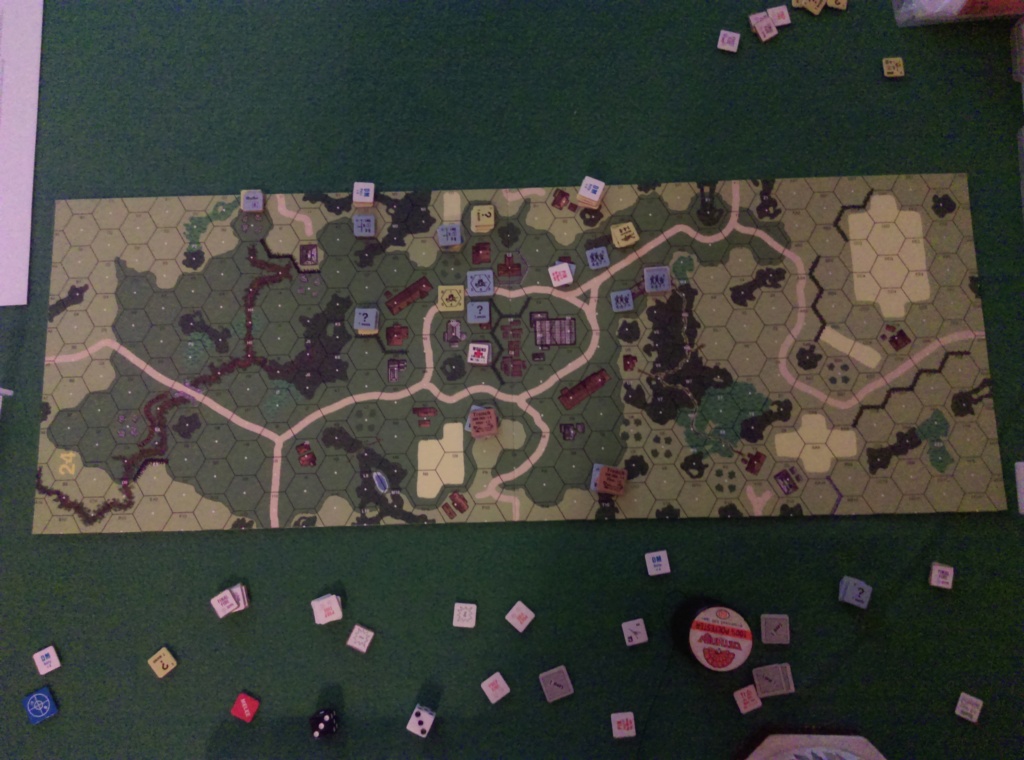 On turn 4, the Americans manage to get into a couple of CCs, but when they are still both inconclusive at the end of 4 turns, the game is essentially clinched. A really one-sided game, in which the Americans never even came close to catching an even break. But I think that the one very positive thing to take out of it was Little Wolf’s perseverance. He showed a lot of character when nearly everything that could go wrong did. 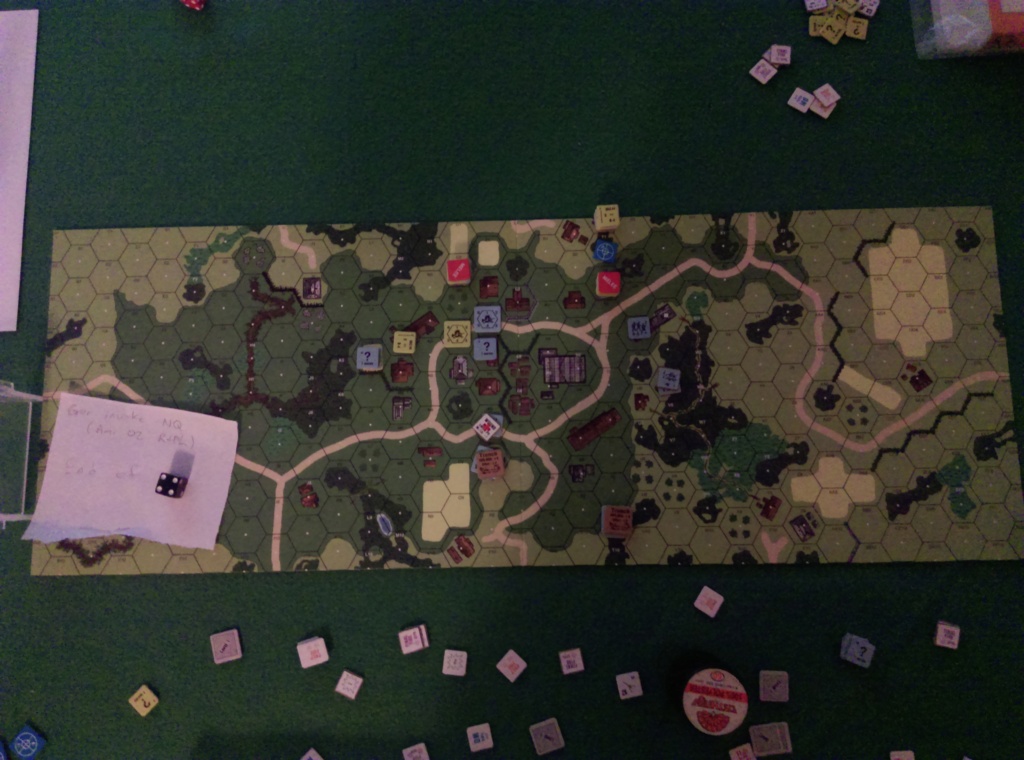 I had earlier prepared a printed VASL map for our next game OA-019 “The Queen’s Prequel”. I set up as the German defender, whilst Little Wolf attacked as British.

Despite not enjoying a good advantage in numbers (essentially its just 8 to 7), the British are afforded quite a bit of cover by randomly placed aircraft wrecks (c/- SSR 2). The British also enjoy a good smoke capability with a pair of 51mm mortars (each has s7) as well as their squad capability. Th German AA guns have to set up in OG hexes adjacent to the runway, so will not be able to remain HIP for long. The Germans have to try to buy time and delay the British advance towards 14H9. Quite a straightforward scenario in most regards.

I had a modest perimeter of squads in the woods, with other squads preparing to deploy and delay, with the AA guns in 14F9 and 14J8. The more time I can buy, the less that will be asked of the point defenders. I had a 50mm mtr placed in 14A10 to dominate the woods approach to the airfield. Little Wolf set up with a small right flank (east) and heavy left flank (west). 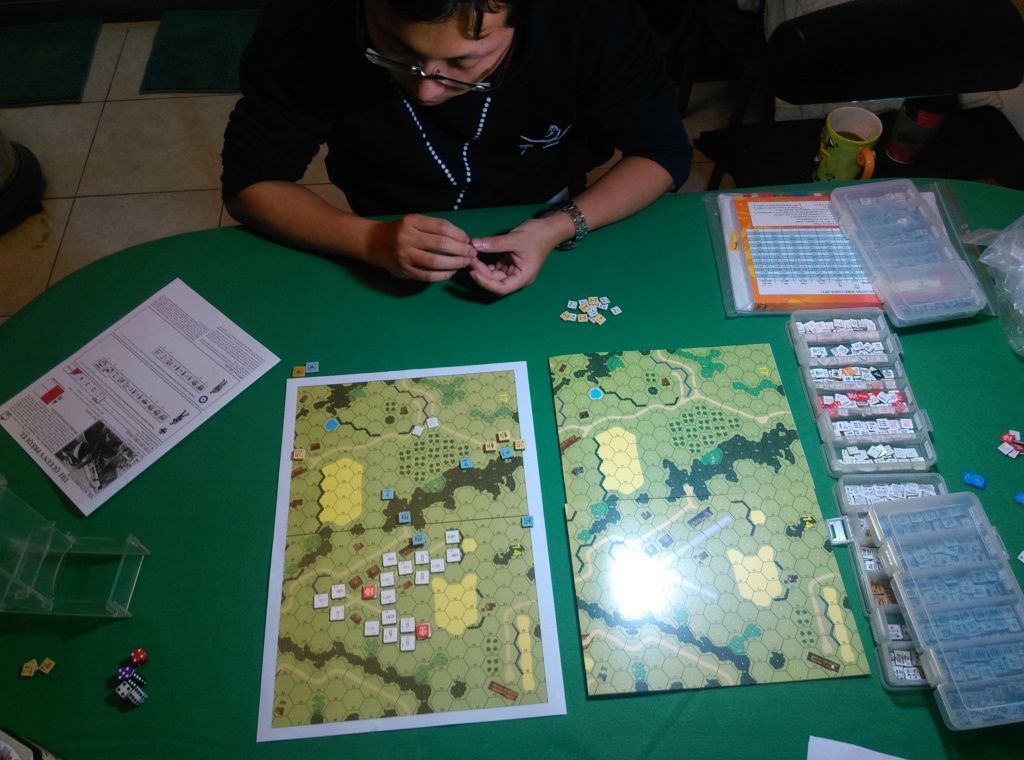 On turn 1, Little Wolf got a bit of smoke from his mortars, and was able to overcome my wooded picket line. I lost one half-squad and mostly dummies whilst breaking one British squad. Meanwhile, another squad deploys and mingles with the remaining dummy counters to form a second picket line. 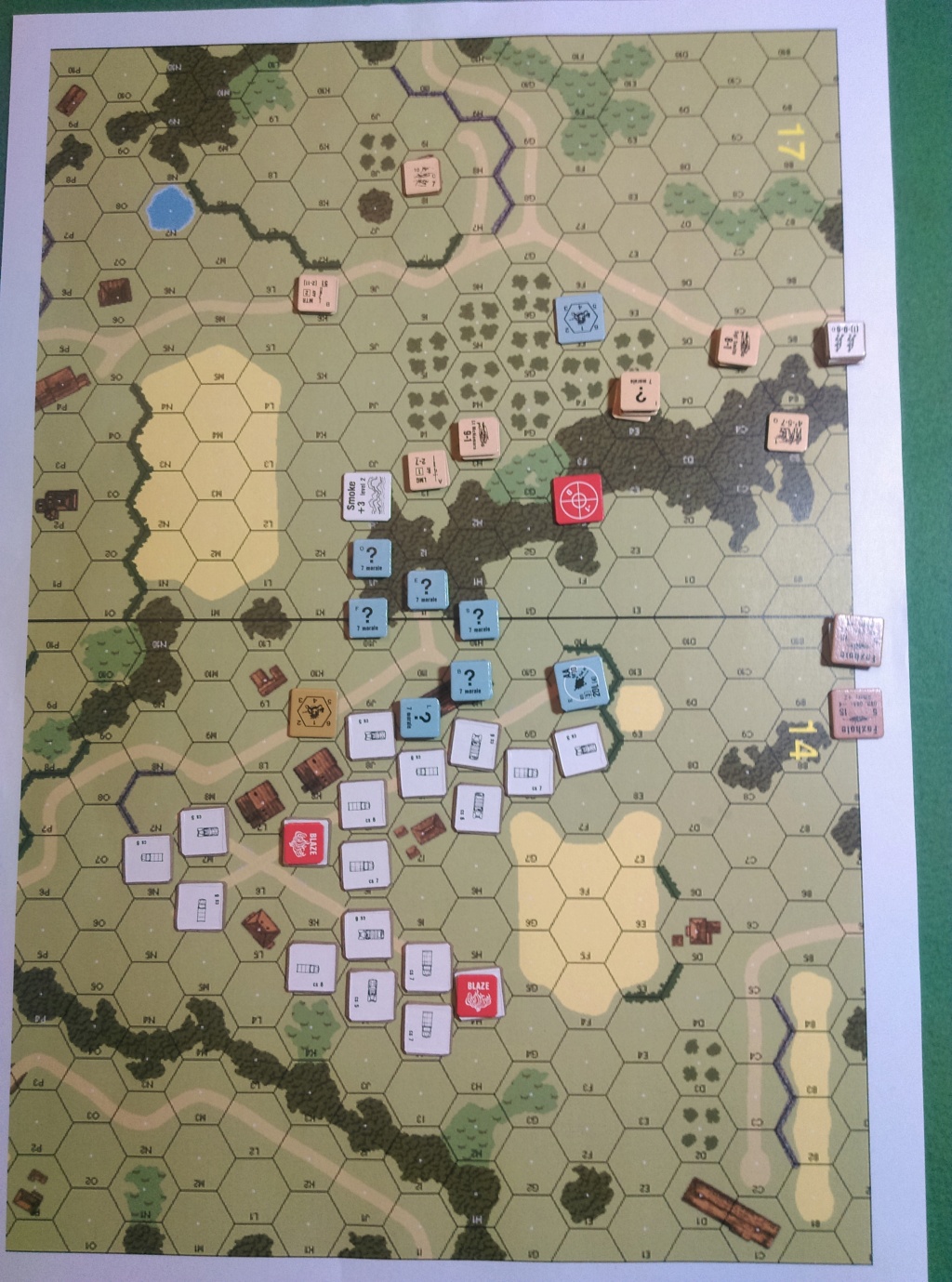 On turn 2, the British push up the woods, locating one of my AA guns, but my defense looks okay for now. If the 50mm mtr can get a ROF tear, a lot of British are going to be hurting !!! 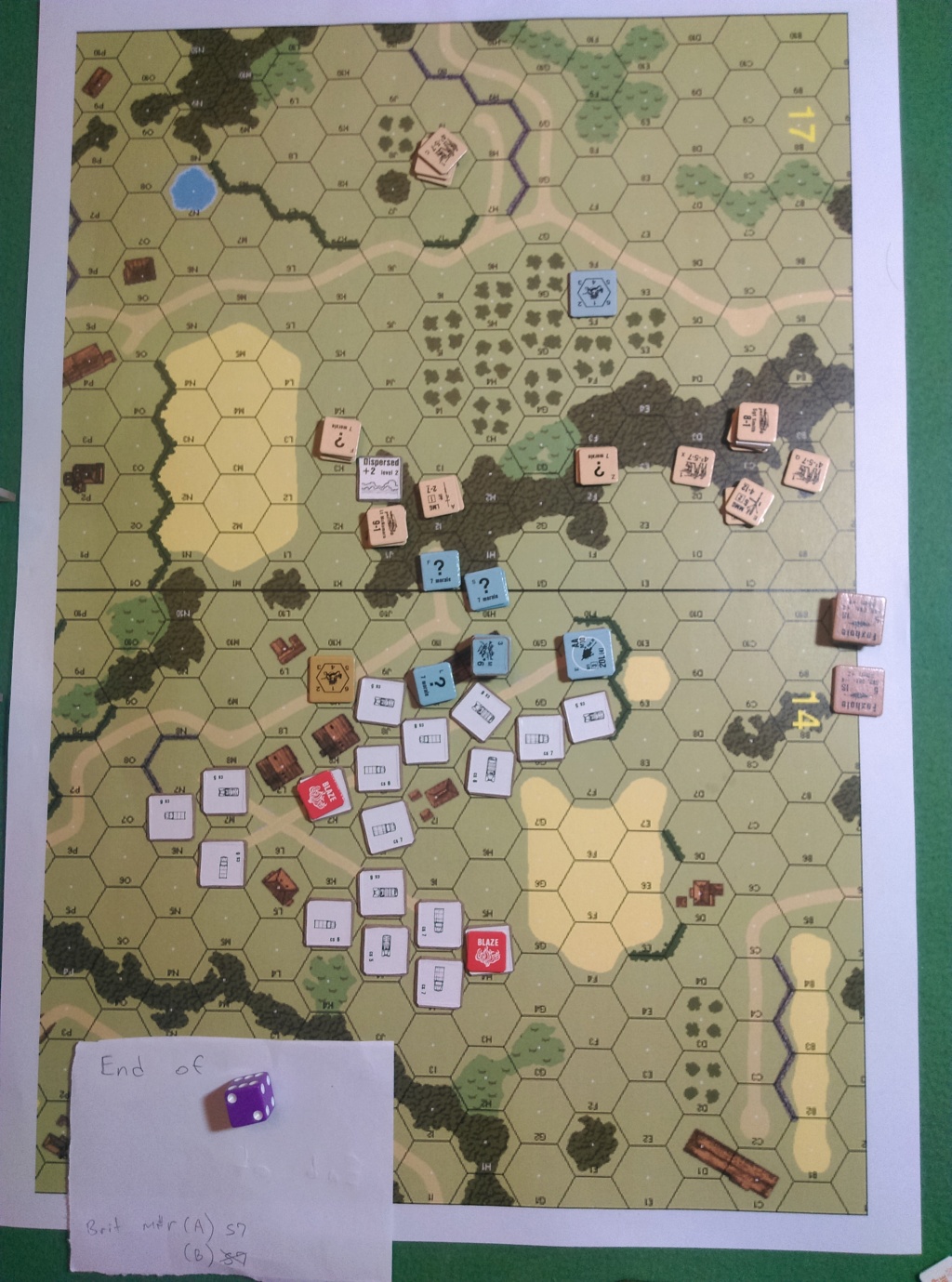 Turn 3 goes very well for the British, the 50mm mortar is neutralized, and the British are able to encircle H9. But the Germans hold out for now. 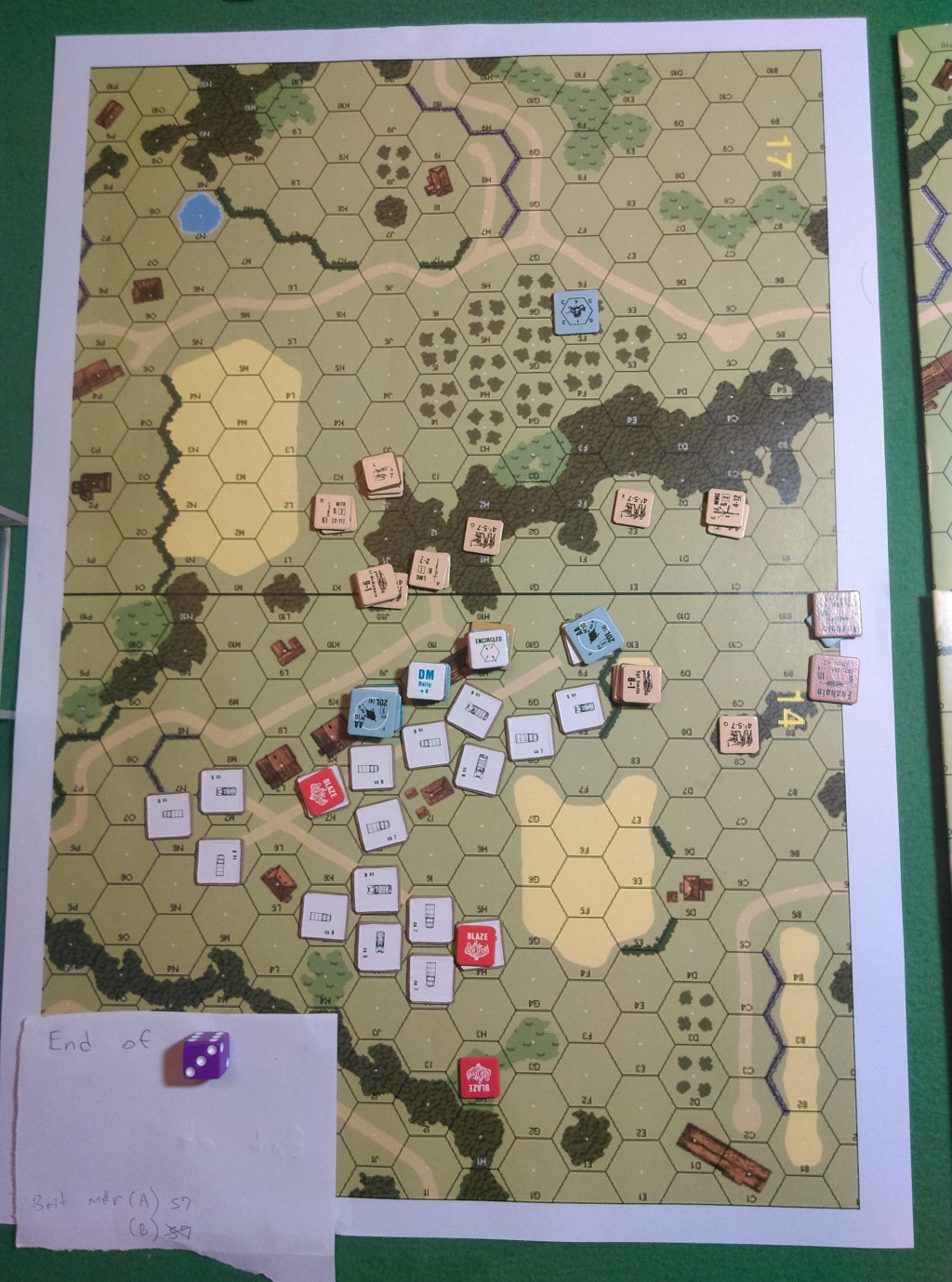 In turn 4, the pressure from the British continues, but the Germans pass a number of MCs, showing that they aren’t ready to cal it quits so soon. But by the end of the turn, the Germans are defending the VC building with a lone 8-0 leader. 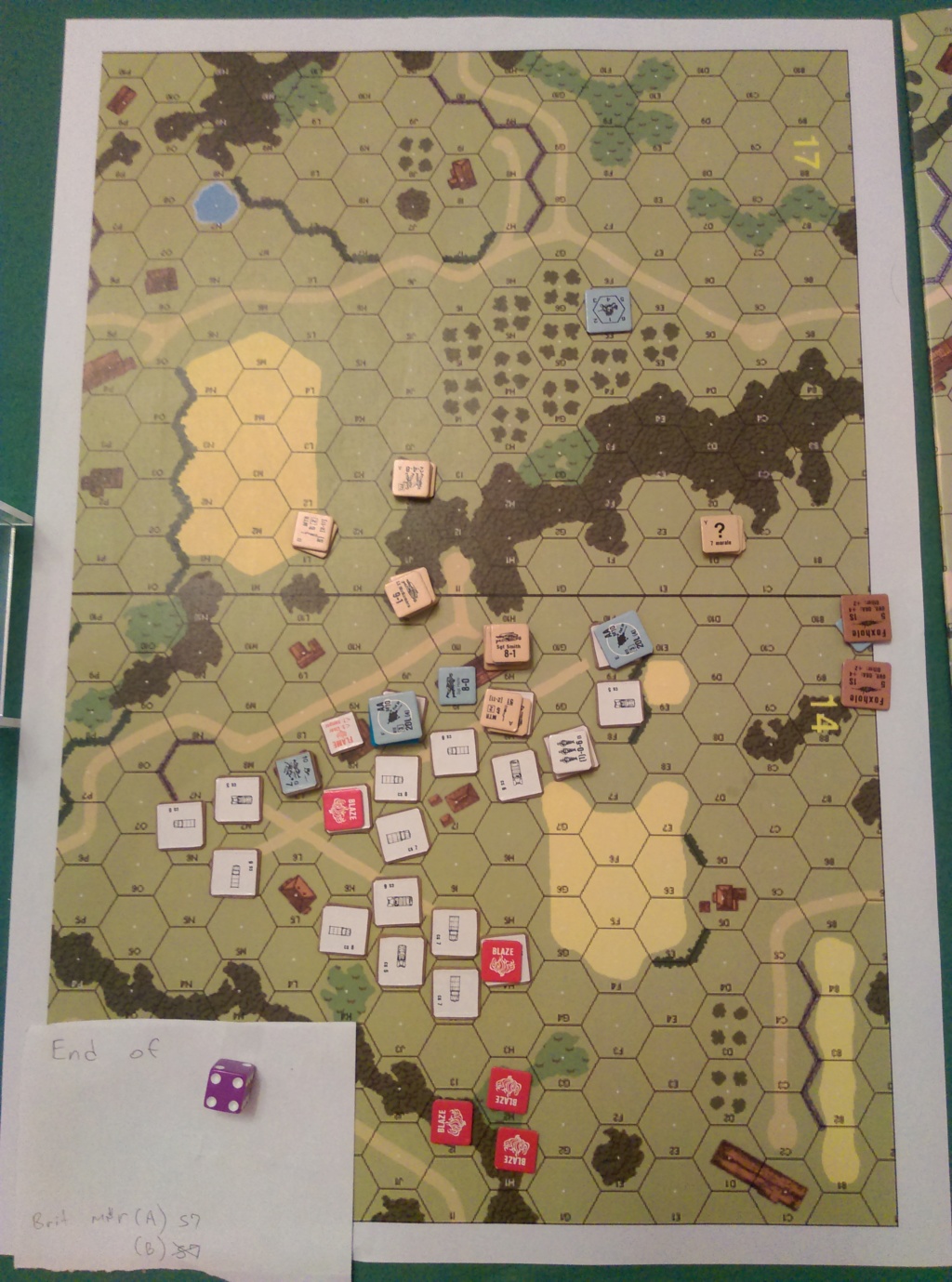 In turn 5, the fanaticism of my lone 8-0 continues right to the end, where he eventually falls to a 13-1 CC attack, giving victory to the British in the last CCPh of the game. It was a fairly close game in the end, although the British were ultimately able to clear the map of Germans with no loss to themselves. 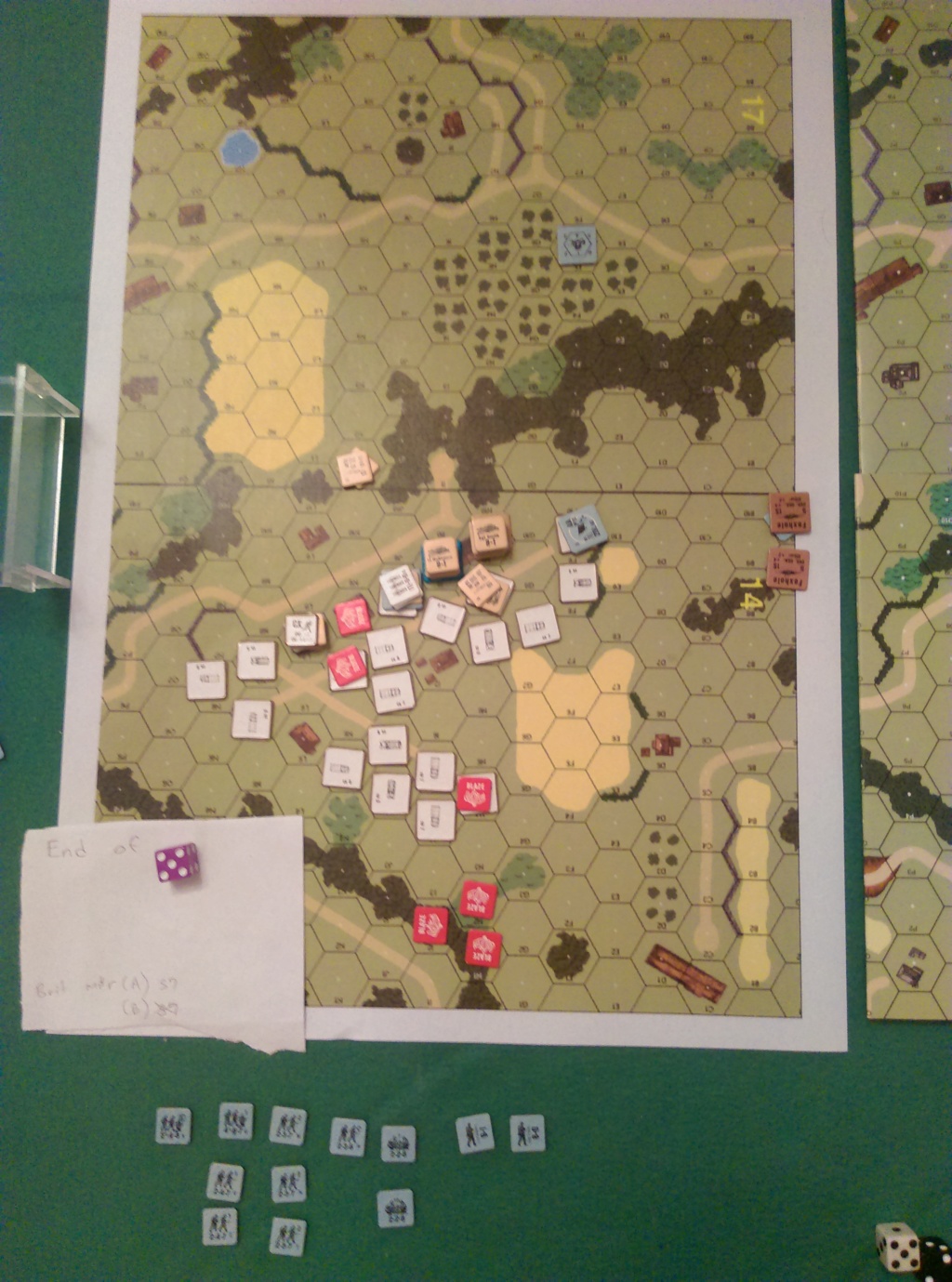 Although the first game was less memorable for Little Wolf than the second, I hope that he will try it again some time, because it is a good ASL scenario nonetheless.