ASL-005 “In Sight Of The Volga”
This afternoon, Robin and I finished our game of ASL-005 “In Sight Of The Volga” that we began last Sunday. Robin played the defending Russians, whilst I played the attacking Germans. Once again, we played on a slightly enlarged, printed VASL map with parallel original boards to be used for LOS. It’s quite the experience to be playing the Beyond Valor scenarios in this way.

This scenario takes place on boards 1 and 20, depicting a German attempt to crush a Russian bridgehead. The Germans attack with 25 squads, 10 leaders, and 7 SWs. The Russians defend with 20 squads (6x 527, 14x 47), 5 leaders, 4 SWs, and a crewed 76*Inf gun. The Russians also receive 18 “?” counters, 6 trenches, may HIP 4 squads, and have a SAN of 7. The Russian also get 628 reinforcements entering along the east board edge equal to the color die of a DR made at the start of the Russian RPh, which is lower than the current turn number. The number of 628s received is reduced by 1 for each German half-squad or leader exited off the east edge. As long as at least 1 628 is received, there is a possibility that the Russians also receive a leader and/or an ammo boat which cancels the at start Ammunition Shortage (A19.131) that the Russians are affected by. If the Germans are the sole occupant of the 20C7 building (a Factory (B23.74) as per SSR 2), then the reinforcement DR is not made. The Germans win by having more GO squad-equivalents with a LOS off the east edge in the factory than the Russians have unbroken squads in the factory at the end of 10 full turns.

The Germans cannot be complacent; the longer they take to clear out the factory, the more 628s that the Russians will receive, and they are ideal for fighting in the factory with their heavy short range FP. Combined with a Commissar for quick rallying, the Factory can become a fortress. The 4 HIP Russian squads makes moving big stacks very hazardous, yet the Germans must attack quickly. However, the 10 squads allow for a lot of deployments, and the Germans can be comfortable rushing east in skirmish formation, a half-squad at a time, with follow-up MG nests to eliminate any Russians that break cover and fire at them. As long as the German hasn’t suffered heavy losses, the exiting of half-squads (and leaders whom won’t be missed) off the east edge is well worth it at an exchange rate of 1 628 per half-squad or leader. The Germans cannot do this forever, but the idea is to exit just enough each turn to keep the 628 reinforcements at bay long enough for the remaining Germans to clear out the 20C7 Factory.

This is quite an exciting scenario to play, since every half-squad matters in this one. The Germans must shut down the reinforcements by either exiting units, clearing out the factory, or both. Robin set up in a cordon of concealed units across the Russian forward line, and upper level strong-points providing supporting fire from the rear.
I deployed the maximum at-start of 3 squads, and during the first few Rally Phases, I made many more attempts. 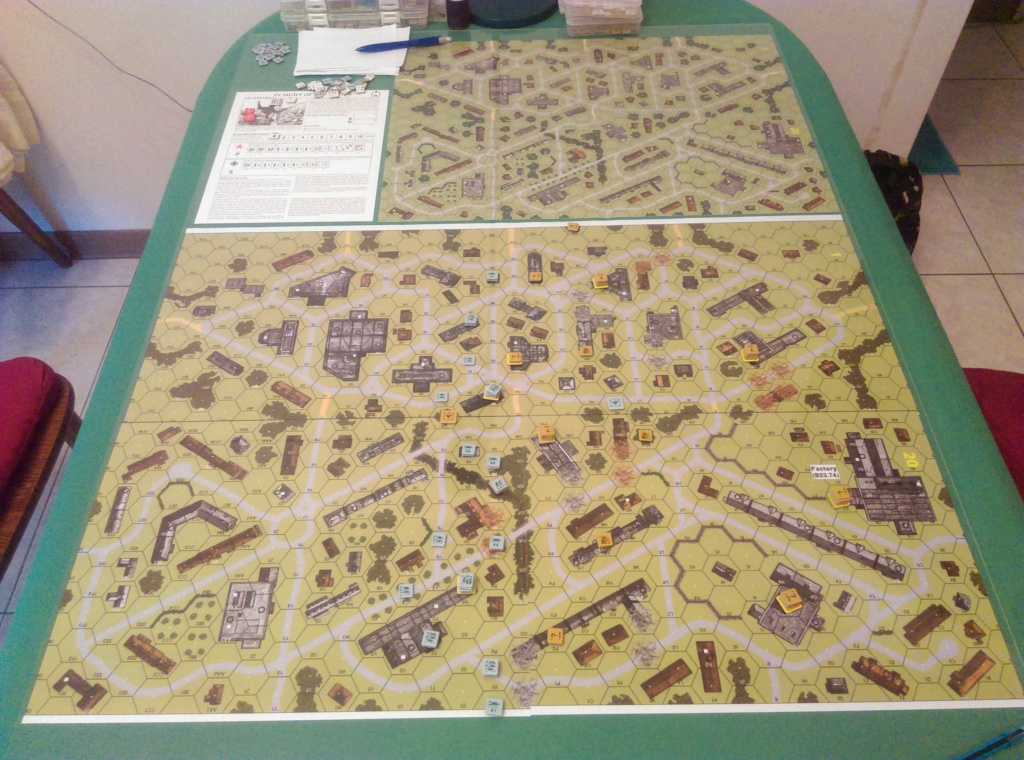 On turn 1, my half-squads rush eastwards, while MG nests cover them with Opportunity Fire (A7.25). Because of the high Russian SAN of 7, I also keep a few half-squad pickets, whose sole purpose is to get between the Russian SAN counter and more important targets in the hope of drawing SAN attacks away from the MG nests (and their ‘-2’ leaders) in particular. Initially, the Russian defense does a good job of slowing down my half-squads, but the over-watch MG nests are able to hit the Russians hard. 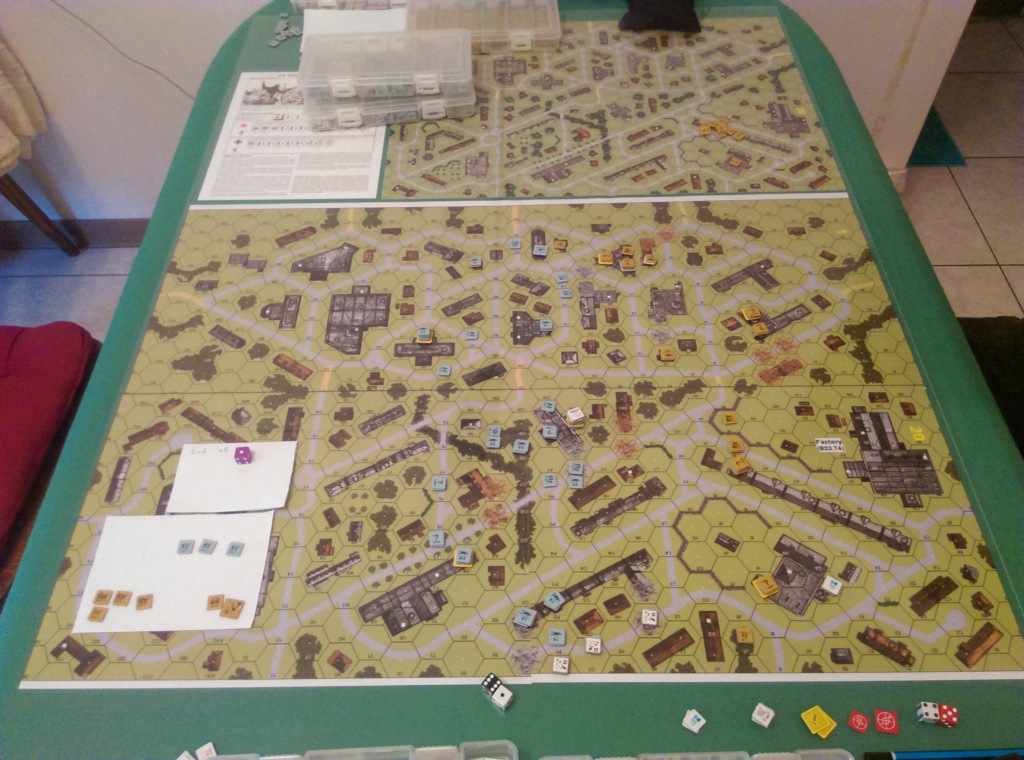 In turn 2, my MG nests enjoy good rates of fire (ROF), and subsequently, the half-squads are able to move a lot quicker. The Russians have lost 7 squads, one leader, the 76*Inf gun, and its crew. The Germans have lost 1.5 squads. 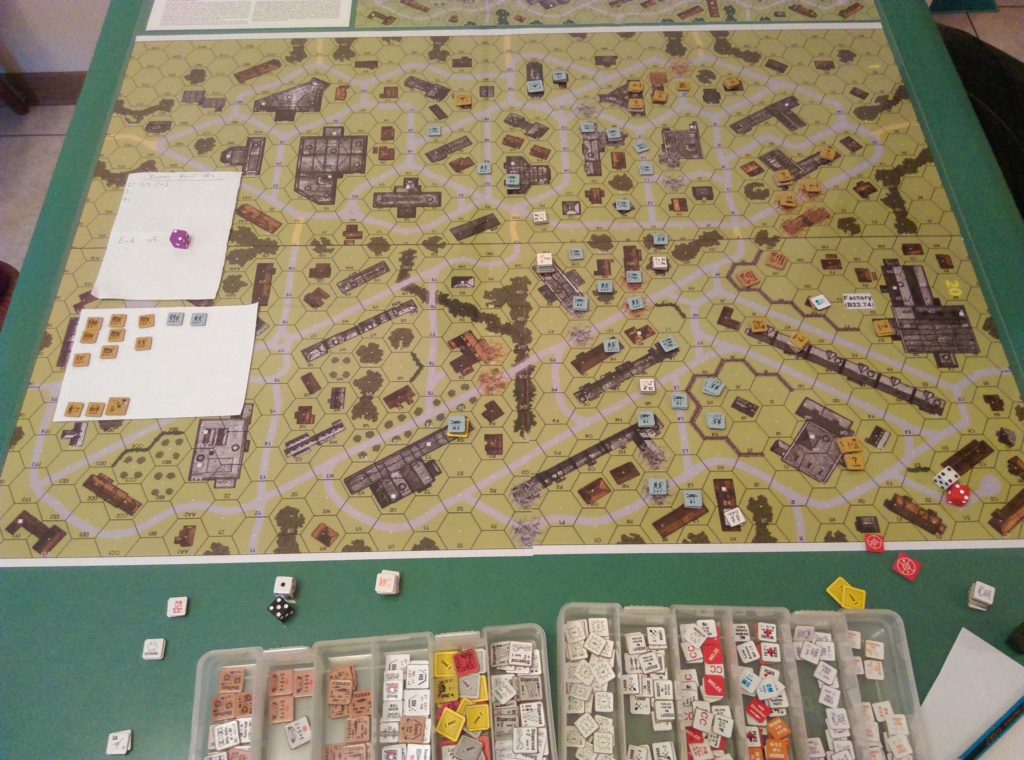 In turn 3, the Germans push on eastwards, even pushing their MG nests forward. Meanwhile,  the Russians do their utmost to get their remaining squads back to the factory. No reinforcements for the Russians yet. 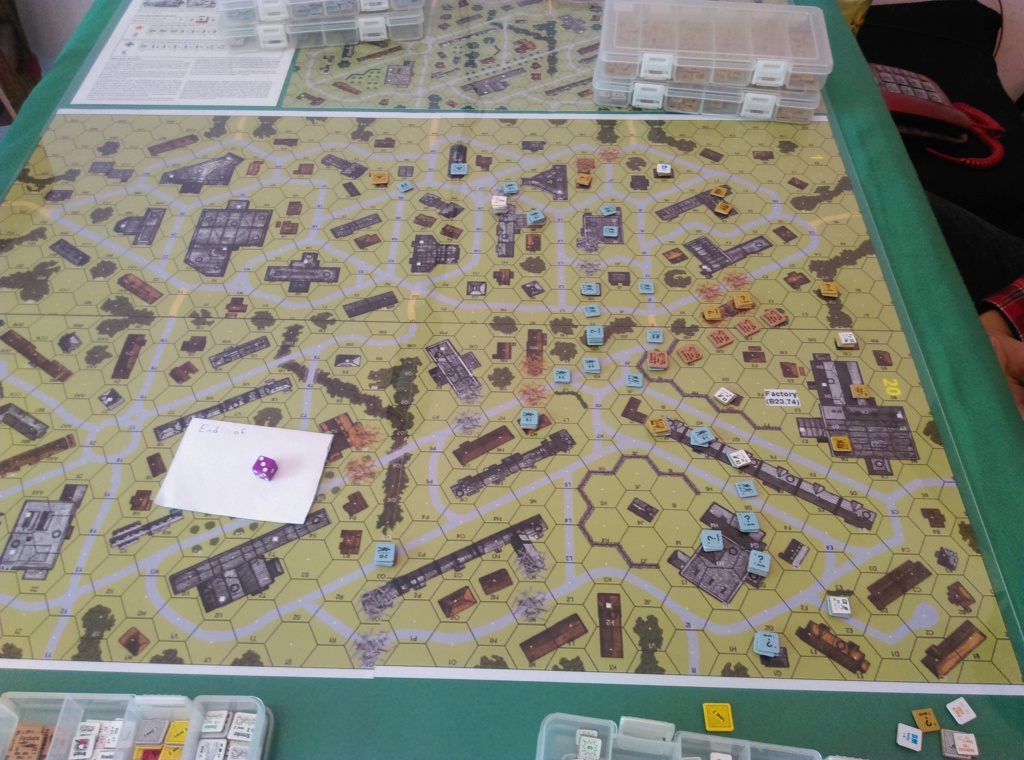 In turn 4, the Germans continue to push eastward. 3 half-squads exit the east edge, as the first German units begin to enter the factory. The Russian reinforcement DR is [1,2] , so 1 628 squad is received, but it is negated by 1 of the 3 German half-squads just exited. That way, the Russians will get no reinforcements on Russian turn 4, since 3 is the most that they can receive, and the 3 half-squads exited will be enough to cancel the arrivals. The remaining 2 exited half-squads will be supplemented in my turn 5 by 2 more half-squads, bringing the total to 4, once again canceling any and all potential reinforcements during turn 5. This approach is the key to not getting overwhelmed by 628s, yet still having enough squad strength to clear out the factory. 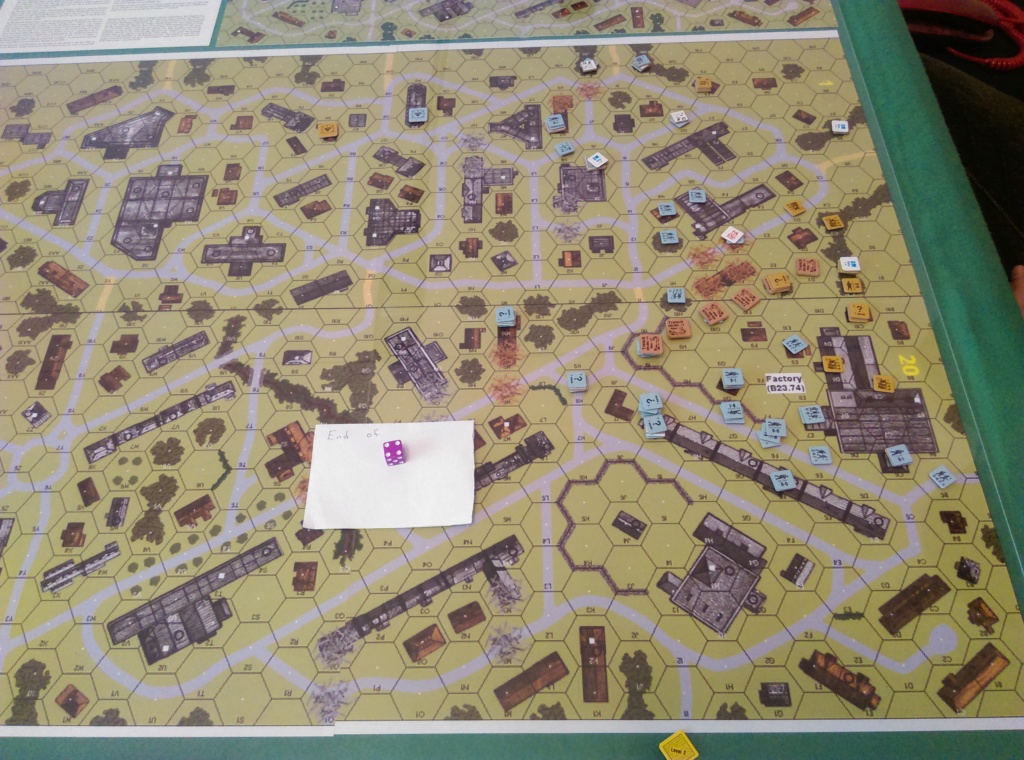 In my turn 5, I am able to overwhelm the factory, clearing out all Russian units, subsequently shutting off the SSR4 reinforcement DR. With the Russians now reduced to 5 squads (3 GO) and 2 leaders (1 GO), Robin waves the white flag. My attack ran pretty much according to plan. The Germans have quite a bit to do, and are needing to move rapidly in a difficult urban environment. But the ability to deploy heavily allows the tactical flexibility to overwhelm the Russians by superior maneuver. Oh, and the ‘-2’ directed MG nests help, too. 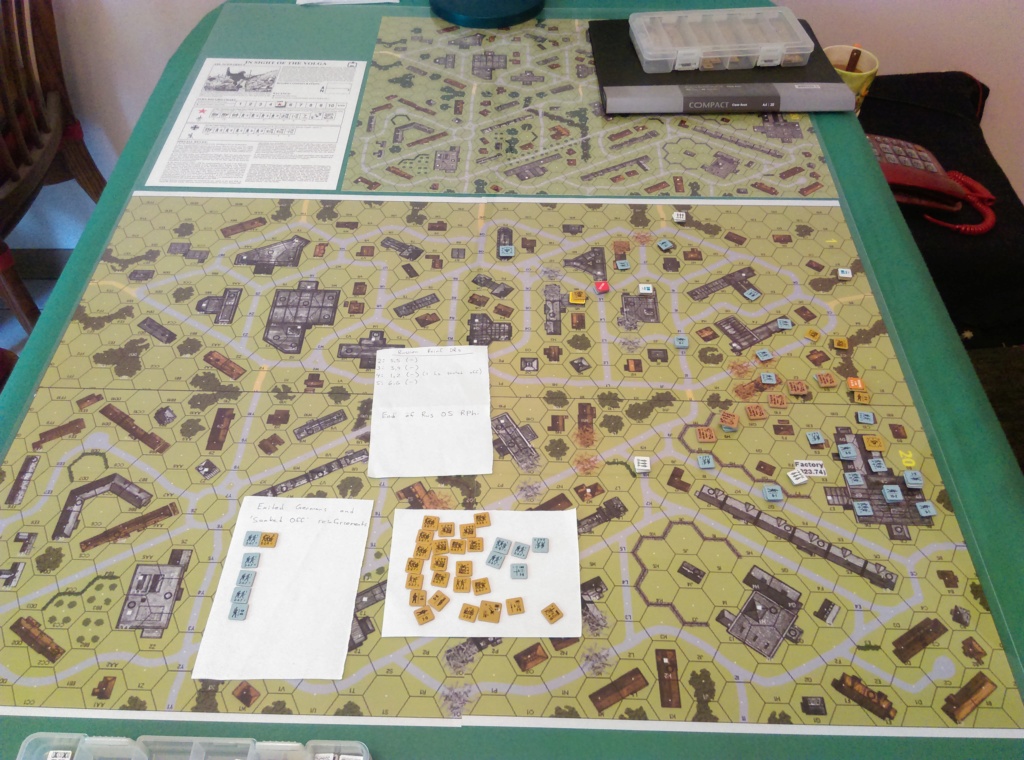